League of Legends Lead Gameplay Designer Mark Yetter has teased players with a preview of the upcoming patch 10.9. The update will buff and nerf plenty of champions, mainly support, top lane, and jungle. While the patch seems to have a smaller set of changes, these updates will affect the most popular champions right now.

The patch addresses a few overpowered champions, such as Wukong, Karthus, Trundle, Bard, and Nami. It’s been quite some time since some of these champions were last nerfed. Nami’s last nerf was over a year ago for patch 8.20, where Riot reduced her Ebb and Flow base heal. After that, she received a few minor adjustments, such as her Tidal Wave removal from the mini-map and her new Tidecaller’s Blessing effects in 10.1.

Bard’s previous nerfs were also minor in League of Legends patch 9.14, then 10.5. When Riot reduced his Traveller’s Call damage, he also received a bug fix. These changes had little effect on how he’s played.

Additionally, Wukong, Karthus, and Trundle have taken over the rift lately, with Trundle boasting a 53% high elo win rate and Wukong a 52% rate. This has especially been the case since League of Legends‘ 10.8 jungle updates came out, where Riot buffed jungle XP as well as healing.

This would be Wukong’s third nerf since his rework a few weeks ago. Aside from casting his ultimate twice, the rework gave him plenty of buffs, such as mana cost reduction and base damage increase. After his gameplay update went live, he received plenty of hotfixes and nerfs in the following patches. Unfortunately for Wukong mains, this new patch won’t be as good to them as his initial rework was.

Trying something new here by showing where specifically we see the champs over-performing that we intend to nerf. Let me know if you like this and if we should keep doing it. 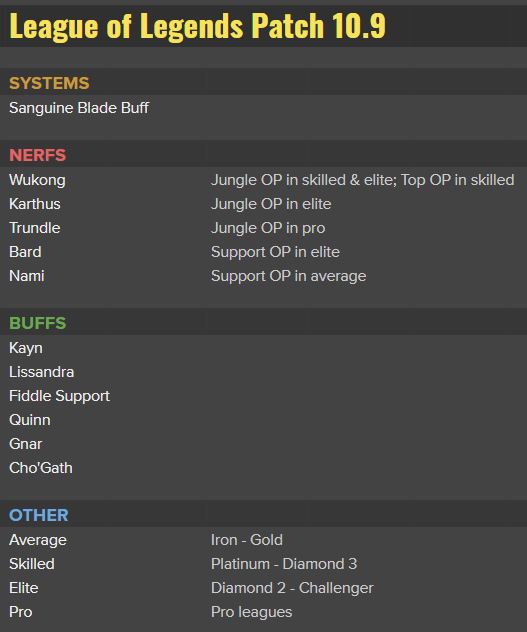 Aside from the nerfs, Yetter also gave League players a preview of upcoming buffs. The biggest update may be for Fiddlesticks support. Previously, he used to be a popular pick for the role. This mostly changed after his rework last month, pushing him down to a 43% high elo win rate.

Since his relaunch, he has received a hotfix that ultimately increased his base damage and health ratio. This has worked out well for the jungle. However, for support, there are other champions that completely overtake him in fights. This buff may increase Fiddlesticks’ usefulness in bot lane, but as Riot hasn’t released details yet, there’s no telling what will change.

Other buffs in the patch preview include Kayn, Lissandra, Quinn, Gnar, and Cho’Gath.

Yetter’s Twitter post has seen a mix of reactions. Some users complained the updates are based on Diamond and higher elo, which is an incredibly small pool of the League of Legends userbase. Others were excited for the buffs, giving input on what Riot should do next.

The patch is expected to release on April 29. PBE updates have not been released as of yet. Once they do, we’ll have a better idea about the exact changes Riot plans to implement.