Two of NA’s brightest teams fight for their ticket straight to the MSS Finals.

After two weeks of Mid-Season Showdown action, only four teams remain standing. With one MSI spot available, all the teams left alive are eager to win the first-ever MSS and claim their spot in this first international event of the year.

In the first round of competition, Team Liquid brought down TSM in a four-game series. On the other hand, Cloud9 handily defeated 100 Thieves and sent them to the Lower Bracket to join TSM. Tonight, these two NA giants clashed for a place in the MSS Finals. 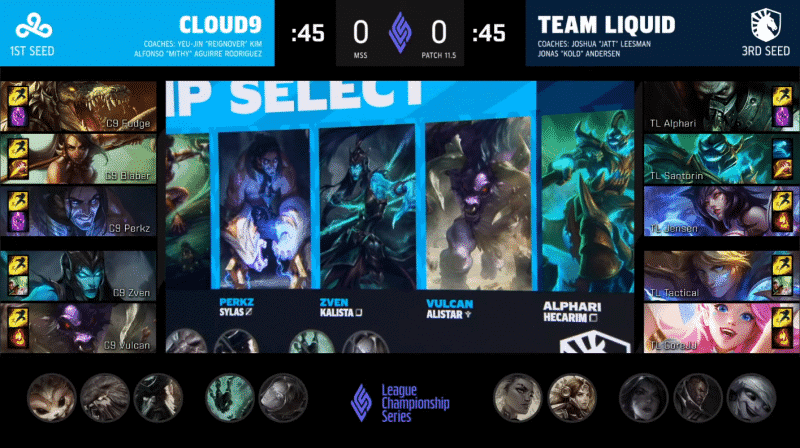 The series started off with a statement game from Cloud9. On the wrong side of a counter matchup, Fudge and his team set their eyes towards the top lane to shut down Alphari from the get-go. As such, Blaber and Fudge dove and killed him for First Blood at six minutes. A minute later, TL attempted a dive of their own onto Perkz, but he managed to trade a kill during it. Overall, the early game was in total control of Blaber, who took both the Rift Herald and first dragon.

To their credit, the TL bottom duo did snag a kill onto Zven. But that kill mattered little because C9 sent two more multi-man ganks to the top lane to make Alphari 0/3 by 15 minutes. With a solid gold lead, C9 went into the mid game in a great spot. That showed at 19 minutes, where C9 won a team fight in the bottom river, killing two and losing none of their own.

From here, C9 had complete control of the game. Santorin, who questionably invaded the enemy jungle at 24 minutes, was caught out and killed by Vulcan and his squad. Because of this, it was easy for C9 to secure the Baron. During their Baron buff, C9 cleaned up some outer towers, but TL’s Inhibitors were untouched. A similar situation to Santorin’s previous death occurred at 29 minutes, when C9 picked off Jensen this time, leading to the second Baron. Though TL mounted a successful defense in their base, C9 ended up taking the Elder Dragon and killed all five TL champions on their way to the first Nexus of the match. 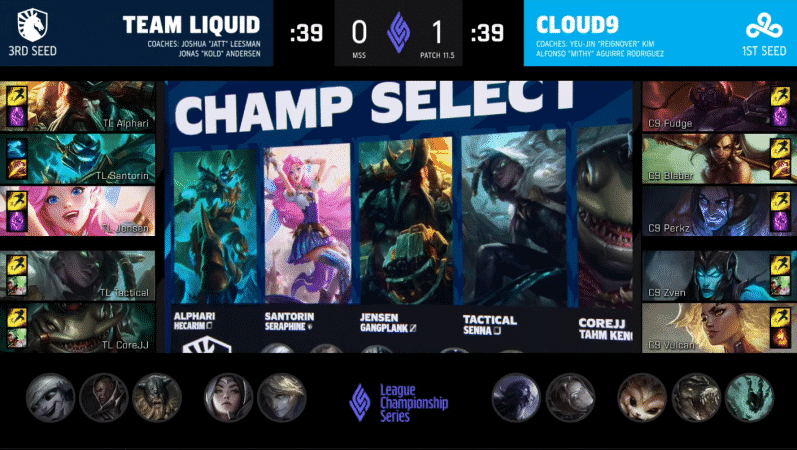 If Game One was a statement, Game Two was a slaughter. But the shoe was on the other foot this time, as Team Liquid devastated C9. It all started with a misplay mid, where Blaber tried to gank but went too far and was killed by Santorin. C9 seemed to be fine though, as they made plays in the top and mid lanes to snag two kills. However, while they did this, Santorin was on objectives, taking a Herald and dragon early on.

Despite the game being even in gold, TL’s composition simply seemed stronger. A 14-minute skirmish saw TL go up one kill, and while C9 did kill the second Herald, they couldn’t pick up the Eye. After this, TL furthered their lead by claiming the First Tower bonus mid.

Then came the game-defining moment. C9 tried to make an aggressive play in the mid lane, but were thwarted by their opponents, who had incredible shields and healing. Rebounding from the initial engage, TL ran down C9 and killed three, losing none of their own. With this, TL asserted control of the map and started taking towers. At 21 minutes, Alphari actually solo killed Perkz, then Fudge also died in the ensuing fight. This allowed TL to take a Baron, and after a four-for-zero fight in the C9 base, TL secured their own Nexus kill to tie the series 1-1. 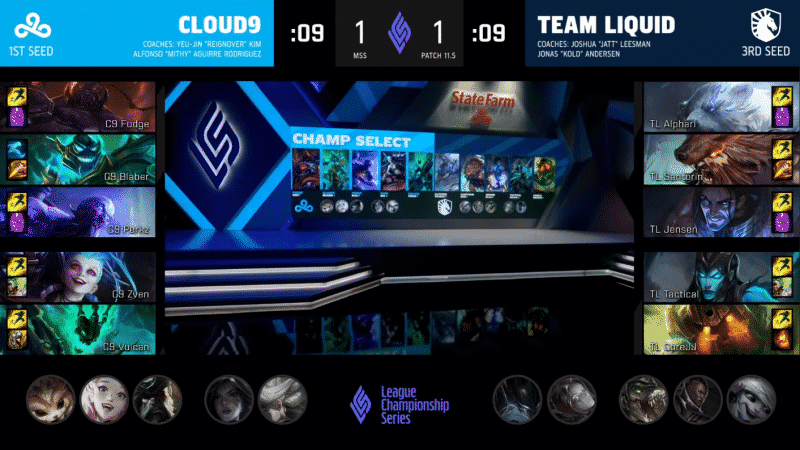 In Game Three, the pendulum swung back in C9’s favor. TL tried to take a page from C9’s playbook, with the Sylas and Kalista picks, but C9’s composition featured scaling and potent team fighting potential. Like last game, the action started in the mid lane. Here, Blaber ganked Jensen and set up Perkz for the kill, but lost his life in a trade kill. For the next few minutes, roams from CoreJJ and Santorin were common, and TL managed to slay C9’s mid lane twice because of it.

It seemed like a good start for TL, but things started to go sideways quickly. With the help of Blaber, C9’s ADC Zven got his first kill onto Tactical. Though TL claimed the First Tower bonus, C9 chose to attack Jensen wherever he went. They killed him twice, with those kills also going to Zven, giving him a 3/0 KD at 20 minutes. Without a lead, TL’s draft was woefully outclassed in the mid game team fights. This was clear at 23 minutes, when a team fight around the dragon resulted in a five-for-two win for Cloud9, with Perkz getting a Quadra Kill.

After this, TL was totally unable to fight C9. Because of this, C9 roamed around the map, taking towers and dragons when they could. The scaling advantage was the crucial part of this game, which showed once more when Perkz 1v2’d Jensen and Santorin to go one-for-one. C9 chose to play it out slowly, bleeding their opponents out over time. However, the game came to a head at 31 minutes at the Baron. TL attempted to stop C9’s take, but C9 easily turned and engaged. This time, Zven picked up the Quadra Kill as C9 killed all five TL champions, Realm Warped mid, and ended the game. 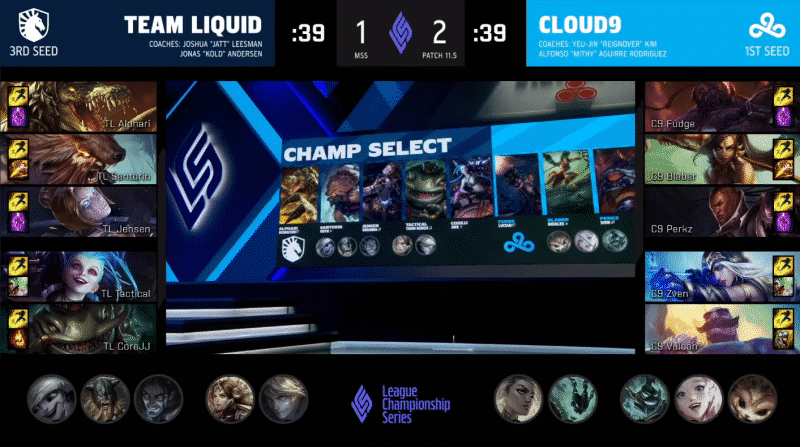 On match point, TL had to push back to stay alive, while C9 just wanted to finish things off. This time, the drafts seemed more even, but Perkz did get his hands on his signature Lucian pick. First Blood came out at only one minute into the game, with C9 invading TL’s bot jungle and picking off Jensen. If this wasn’t weird enough, TL caught out Fudge at the same time, killing him at the same time their own mid laner died.

And the action kept acceleration, never missing a beat. The junglers were everywhere and things were relatively even. TL secured a kill onto Perkz and the First Tower bonus, while C9 killed Alphari and claimed an Infernal Dragon. But C9 soon began to pull ahead of their competition. A 16-minute team fight on the top side of the map netted C9 a two-for-one kill trade. While the kills weren’t as significant, the fact that C9 swept up two towers and a second dragon afterwards put them far ahead.

Similar to the previous game, TL appeared lost in the face of C9’s power. And once again, at 24 minutes, C9 found a pick onto Santorin, giving them free access to the Baron. Tactical nearly stole it with a Jinx ultimate, but C9 secured it and began their push. Empowered with the buff, C9 soon pushed into TL’s mid Inhibitor. Somehow, Blaber assassinated Tactical in the middle of his team on Nidalee, which spiraled into a team fight. Of course, C9 pulled ahead, but the last moments were tense as TL’s Nexus Towers fell and Alphari killed a couple of C9 members. But Zven stood firm and focused the Nexus, killing it and finishing TL’s chances of mounting a comeback.