Team SoloMid (TSM) has introduced its competitive Valorant roster, stacked with professional Counter-Strike: Global Offensive (CSGO) players. TSM is a North American esports giant known for high-level competitive play in League of Legends, Apex Legends, and Fortnite. At one time, the organization was home to a monstrous CSGO roster, which would later become Astralis.

As Valorant‘s competitive scene continues to flourish, this is only the latest headline regarding organizations of all scales scrambling to pick up squads. Recently, Immortals introduced its own roster. More notably, Cloud9 is developing its roster with former CSGO pro Tyson “TenZ” Ngo. Furthermore, Gen.G picked up a Valorant team, filled to the brim with French Canadian CSGO players. 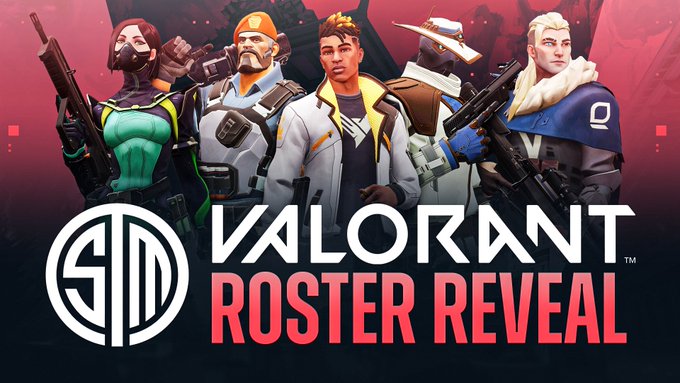 The roster has decades of competitive Counter-Strike experience. In particular, hazed and reltuC have played high-level CS since Counter-Strike: Source and Counter-Strike: 1.6. Not to mention Wardell, Drone, and Subroza’s competitive history is impressive. Subroza and Wardell recently played on a professional CSGO team together named Orgless. Their team chemistry moving forward will benefit the organization.

Since the roster’s announcement, there’s been an outpouring of support from both the Valorant and CSGO communities. Erik “fl0m” Flom, Adam “Polen” Polen, and Todd “anger” Williams shared their support for their former Mythic teammate, hazed, in the replies. Likewise, popular TSM content creator Ali “myth” Kabbani shared his excitement for the reveal. He jokingly questioned why his position as the team’s official cheerleader was left out of the announcement.

Weird that I wasn’t put in this announcement as the official cheer leader but we’ll talk about that another time.

The hype around Valorant‘s competitive scene grows every day. Currently, there’s no word of an official competitive league. However, it’s safe to say the community will be hearing more about it soon. Looking ahead, fans can anticipate TSM’s Valorant roster to participate in the upcoming tournaments and events.