Home » Mobile » Buried treasure: Unearthing the hidden indie gems from beneath the sea of games

Every single day, an avalanche of indie games are released onto Steam, Itch, the Epic Games Store, and more, meaning far too many interesting projects go completely unnoticed. We’re here to shine a light on the games that deserve to be brought out from the shadows, to give attention to the games that otherwise might have been entirely missed.

And this week, we’re going to start with a full-motion video release.

You’d be a fool to mess with a cop who can pull off this enormous sweater.

Set in the elaborate maze of back rooms and corridors of a skeezy Russian nightclub, She Sees Red is a full-motion video game in which you make choices for a young man, pursued by both Russian mobsters and a police detective. And pursued for good reason, because he’s done some murders.

What your character is doing, or why, is the core mystery of the experience. That the people he’s killed are extremely dodgy thugs, seemingly mixed up in drug dealing and perhaps worse, doesn’t appear to offer you any moral high ground. If there’s anyone here whose side you instinctively want to be on, it’s the cop’s, as her detective skills are immediately apparent, and her fearlessness (despite being followed and scrutinized by hooligans) makes her an appealing character. And yet you’re tasked with making choices for her quarry.

Player interaction is minimal, with just occasional binary choices to be made as the film plays out. But what makes it work is a combination of those choices feeling pretty darned significant, and the film you’re watching being compelling, well acted, and often extremely well shot. Especially the fight scenes, which is … rare for this genre.

This is a Russian project, with an excellent Russian cast, and nearly perfect subtitling. So I strongly suggest switching the audio from its default English dubbing back to the original.

Each decision I made further cemented a desire to play again. Just how differently would the scenario play out if I had opted to have the escapee abandon his plan and improvise, or had chosen to spare a victim? It takes about half an hour to reach an ending, after which the game reported that I had seen just 27 out of 62 possible scenes.

And gosh, it’s worth at least a second play. The second story I was shown was fundamentally different, giving me a new perspective on the tale being told. I had seen 44 out of 62 scenes after that, so of course I want a third go. The only real flaw here is that there’s no way to skip scenes you’ve already seen, while choices are on a very short timer, so it’s far too possible to be distracted and miss a chance to make a new decision.

FMV games are far more often miss than hit, but She Sees Red succeeds through its high quality of filmmaking, plus its combination of brevity and replayability. Gory, sweary, and even a tiny bit nude-y, this is a grown-up FMV title with strong execution.

She Sees Red is available on Mac and Windows PC via Steam for $7.99.

He’s really not as bad as you think! He gives you a coin each time you die. 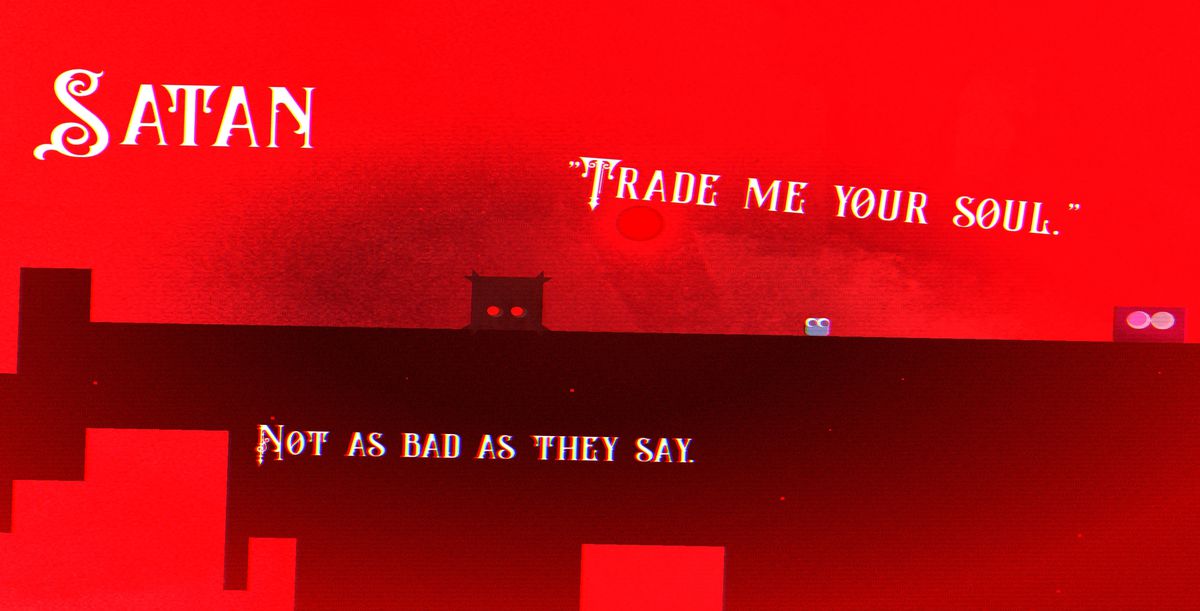 Break the Game begins by imploring you not to press anything. Its glitchy menus and half-finished platforms appear on a flickering, fuzzy screen, and the game strongly suggests from the start that you should just quit. The characters within the game, however, would rather you didn’t. They need help making good their escape. It seems the game’s creator is a malevolent coder, and everyone inside wants to get away from the world created for them.

Which is a splendid premise for a silly, lighthearted platform game that puts its emphasis on banter. Which could be a damning comment were it not for the fact that the game nonchalantly offers a very solid, if otherwise unoriginal, set of levels through which to bounce your blocky friends.

This is first and foremost about the jokes, however, so it’s a pleasure to report that Break the Game is often very funny, and always congenial and entertaining. Various voices frequently pop up, in written form, from the main character — a square called Kevin — to enemies, shopkeepers, and perhaps most significantly, the game’s creator, who is furious with you for not having hit the exit key already.

But as I say, it’s crucial that the movement feels good too, or no number of jokes could rescue the game. And this is where the game surprises me; the movement feels janky, but it’s janky with such a deft precision that I wonder if it was discovered due absolute genius or complete luck. Jumps don’t quite flow properly, and yet they’re a pleasure to control. Add in double-jumps and dashes and many more upgrade “chips”, and this confusion of glitch-and-glide only becomes more impressive and bemusing.

While it looks very simple in a screenshot, there’s actually a fair amount of cleverness going on with the visuals as well. Each level is glitchy or distorted in a different way, and, while the characters and enemies are mostly rectangles, they’re extremely well lit and animated. Everything has much more life than you’d expect from this description.

It is, in the end, undeniably a middling platform game. But it’s one that glides by on its charms as it delivers its ridiculous story, piles on the visual and written jokes, and exudes a cheerfully daft atmosphere.

Break the Game is available for Windows PC via Steam for $9.99.

Sure you can cope with reading a game! You’re reading this, right?

Heroes of Myth is a game about a lie. A very big lie that your character told three years ago. As a magician of illusion, you were a co-conspirator in a masquerade to look as though you’d successfully defeated demons from another realm, saving countless people, and fulfilling a fictitious prophecy. You have since been heralded as a hero of the people. But now that lie is finally catching up with you.

Of course, it wasn’t as clear cut, or as malicious, as that. There were complications. There were noble intentions. Or perhaps there were none of those things at all, and you were simply showing off. Or it could be the case that you were swept along by more convincing people, and immediately regretted your involvement in the deceit.

Because in Heroes of Myth, you determine not just the flow of the story, but more importantly, how you feel about what has happened, and what might happen next. And this is all handled through the selection of responses via radio buttons in this gloriously well-written text-only interactive fiction.

Yes, I bounce off interactive fiction games as quickly as most, either overwhelmed by the complexity and jargon of the genre, or alienated by the overly purple prose and the threadbare-worn tropes. But stick with me here. This is published by Choice of Games, which I too have only just discovered, despite its having released 101 games onto Steam over the last five years.

The publisher’s games, by a huge array of authors, do not have a text parser, but are instead more Twine-like in their choices of responses. It’s an accessible system, and yet still capable of intricate, behind-the-scenes complexity as the game creates a persona for you via the decisions you make. The stats page for this game demonstrates how the simple interface belies some astonishingly detailed character creation.

Of course, that’d be for nought without a good story and great writing, and Abigail C. Trevor delivers both. This is a 560,000-word interactive tale, so I shall not pretend to have finished it. But gosh, I can’t wait to do so.

I always crave fantasy fiction, but rarely find any that doesn’t put me off with its florid prose or 17-book arc. This is the answer.

Heroes of Myth is available on Windows PC, Apple, and Android for $6.99.

All three of this week’s games were reviewed using final retail downloads, via a Steam press account.