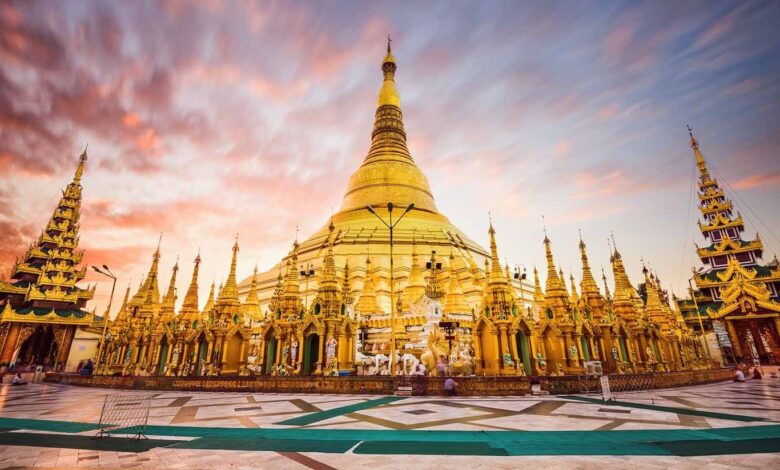 There are a few countries in South-East Asia that have managed to remain undiscovered by tourists, such as Myanmar/ Burma. Thanks to its turbulent past, the country has been inaccessible for close to half a century. After experiencing very short independence (between 1948 and 1962), the government was seized by a military coop which kept the country completely closed since 1962. People could not go in or out. Truthful information about life inside Myanmar was impossible to get. The military coop kept control over the media, communication technology (most did not have access to), and transport. Only limited information about the rebellions happening inside managed to leak out.

In 2011. Myanmar opened its borders to the world, for the first time in decades. And now, almost one decade after the opening, tourists are allowed to travel there for business or pleasure. According to visagov.com depending on the nature of your stay, visas are given for 28 days for tourists, and 70 days if you’re visiting for business purposes.

Aside from military rule, Myanmar’s cultural richness is immense. It’s a huge country, having more than 100 ethnic groups. Imagine the cultural heritage behind it. It leaves you with so many possibilities to explore.

People often travel to Asia for a minimum of one month, since there is so much to see and experience, so what are the top places to visit in Myanmar to make the most of your stay? Here some suggestions. 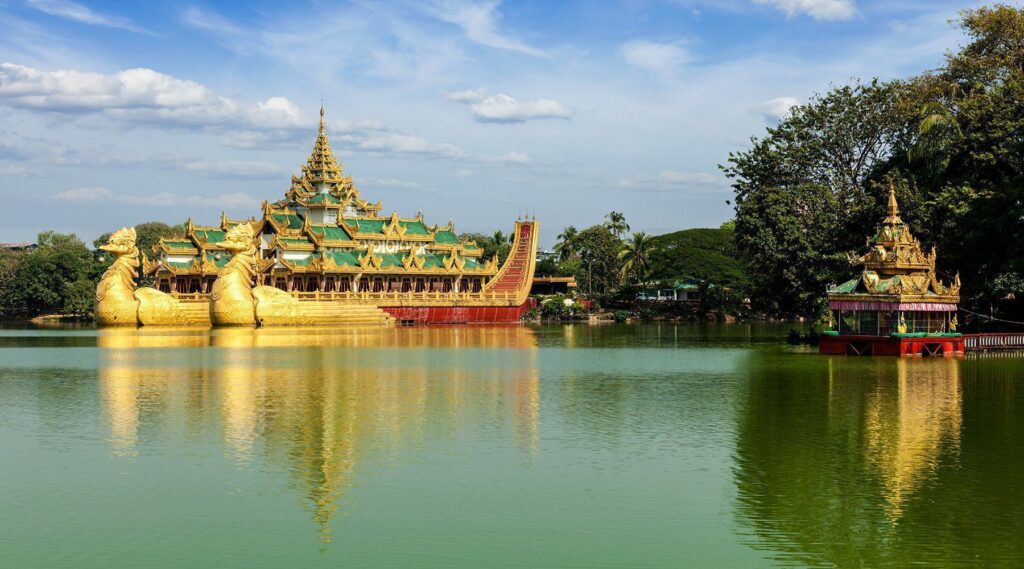 The city of Yangon is the largest in Myanmar and has been the country’s’ capital until 2005. It is covered in beautiful tropical greenery and lakes. Yangon has been the hotspot for tourists for various reasons, one of them being its closeness to the border with Thailand. It keeps the colonial history of Burma (Myanmar) George Orwell wrote about, from oblivion. For a good reason, it was named “the city of a thousand golden pagodas”. Which brings us to the second place you must visit.

One of the world’s most famous pagoda was built more than 2500 years ago. For the Buddhist community, it is the most sacred site, guarding a highly valuable ancient relic. The four hairs of Gautama Buddha. Just like most of the pagodas usually are, it is covered with golden leaves, stretching 99 meters in height. Since the country is famous for jade, precious stones, rubies, sapphires, and even diamonds, the pagoda is also decorated with it. 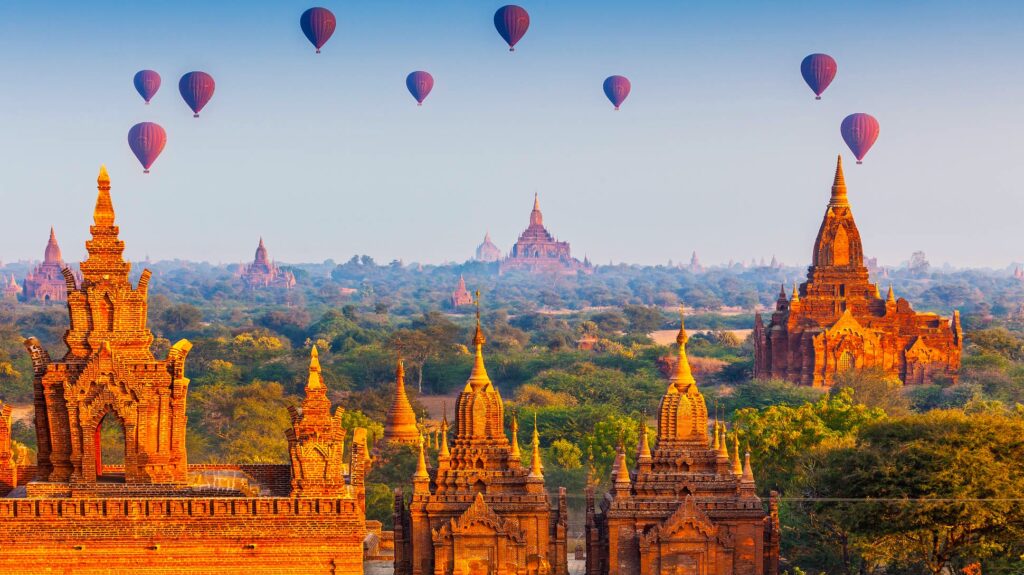 Those who were lucky to walk in this sacred place, know there are hardly any words to describe it. Ancient pagodas and temples are stretching along the forty square kilometers plane, as witnesses of the ancient civilizations that existed. Many have contributed to the Bagan. The Irrawaddy civilization began building it in 1044, the King Anawratha continued, followed by Mongols and Shans. Some of the most famous temples in Bagan are Ananda Temple, Shwezigon Pagoda, Dhamayangyi Temple, and Sulamani Temple. An experience worth having is the sunrise in the plane, when the whole area is covered by mist and only the tops of the pagodas peeking through the mist. It is also the most famous visual presentation of this magnificent place. 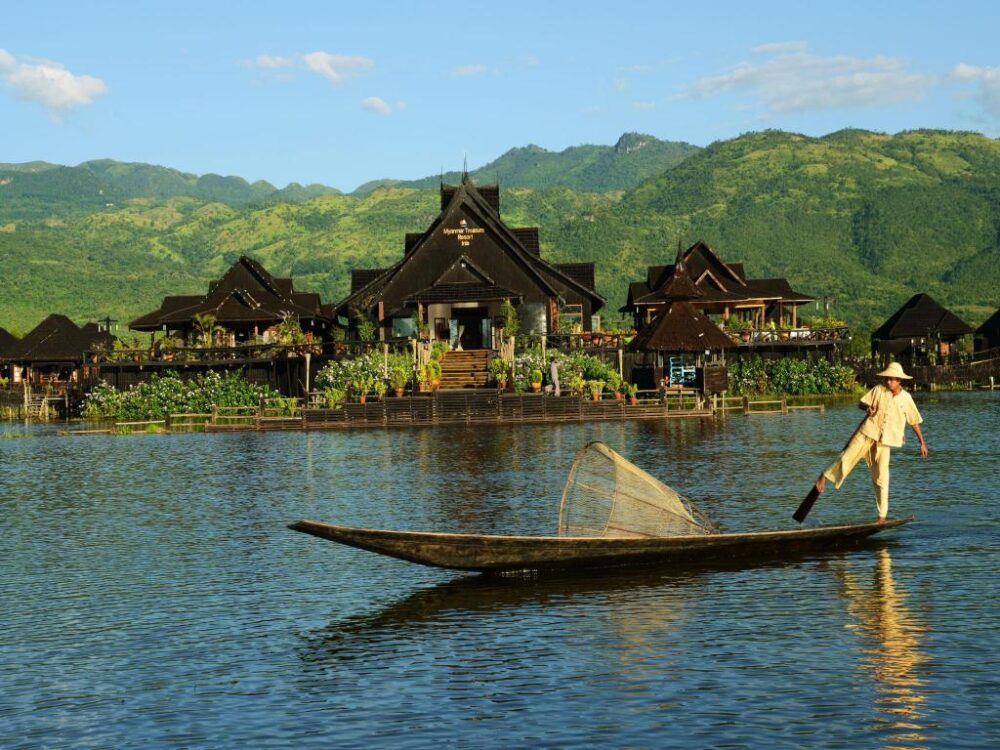 Visiting places rich in nature and wildlife can contribute to a variety of experiences you will bring home. Located in Shan state, visiting the lake is a good excuse to go boating. Anywhere you go to in Myanmar you will encounter history, but this visit will also allow you to get familiar with the endemic species of fish and snails. On the other hand, do not expect too much, since the numbers of these animals have decreased drastically during the years. When you’re done with the boating tour, make sure you don’t leave without trying famous Shan noodles. 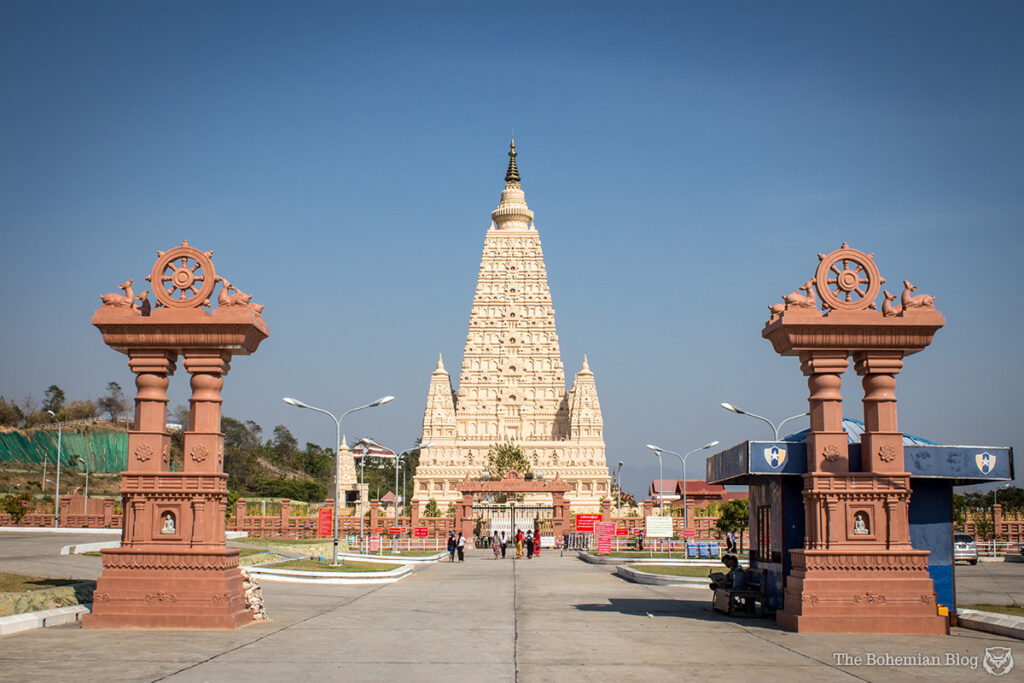 Definitely something worth seeing. Although it cannot be proud of its ancient history, it stands as a representation of a military government that ruled the country for almost half a century. The construction of this bizarre city began in 2002 and was finished in 2005 when Yangon officially seized to be the capital. For many years it was simply a ghost city, offering fantastic living conditions, unlike the rest of Myanmar. Some estimations say that the number of inhabitants is close to one million, but most claim these figures are a lot smaller. Did the military built this city just to show of their force, or to have more political influence on the surrounding states, no one knows. 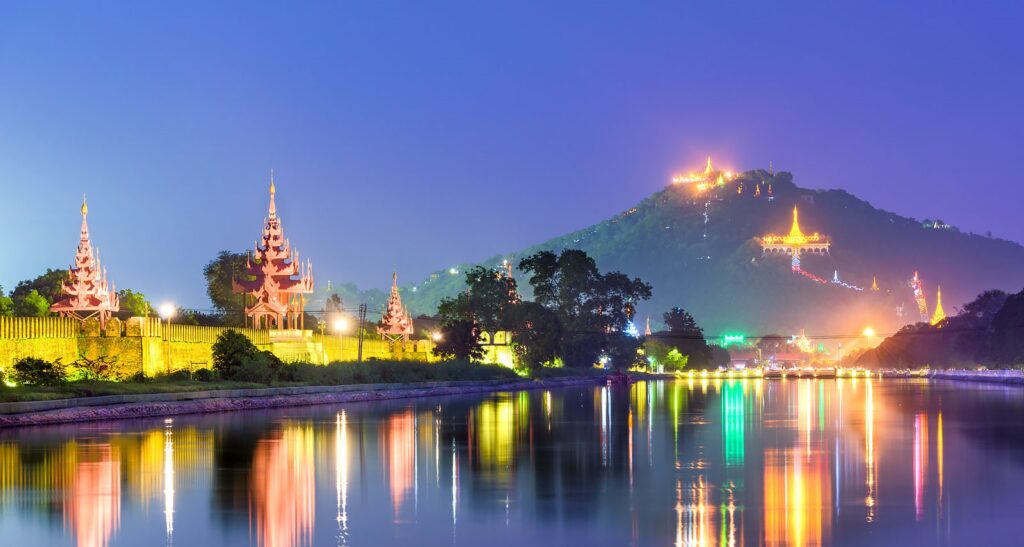 The last royal city should be the top of your visit priorities. The name itself sounds like something from fairytales. It is the second-largest city in the country and the religious center for Buddhists of that region. When you are there, be sure to visit the Royal palace and the Pagoda Shwenandaw. Surrounded by Shan mountains and the Irrawaddy River, this visit will be like time travel. Or the balancing rock. Located in Mon state, this pagoda is among the most interesting to see, because it is balancing on a rock, defying the gravity. Some legends say the pagoda has a relic inside – a hair of Buddha, which helps it attain balance and not fall off the rock. It’s also called a golden rock because it is covered with golden leaves, as is the pagoda on top of it. Another place in Shan state that offers you to experience untouched natural beauty and tribal life, while tracking through these three towns. Kyaukme to witness the native lifestyle, Hsipaw where the old Shan palace is located, and Lashio a home to legendary sea gypsies. 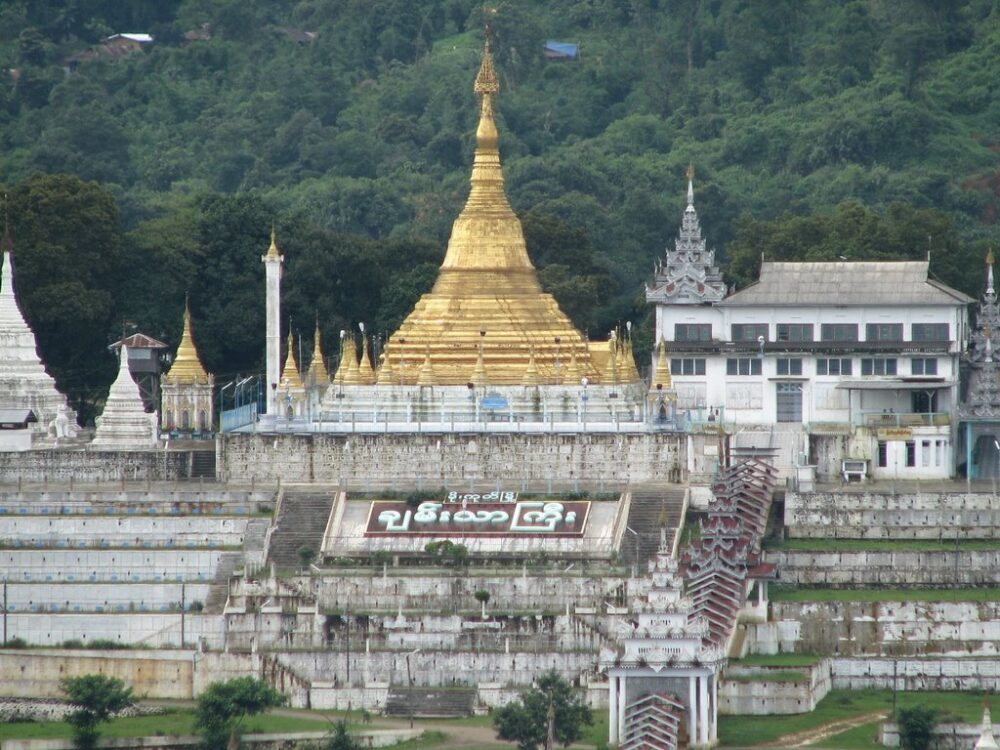 Myanmar is famous for its mines of rubies, jade, and other precious stones. Mogok is the nation’s reserve of diamonds and gold. The biggest jadeite mine, the pillar of the economy. It is also home to a diverse ethnic population, making it worth visiting. 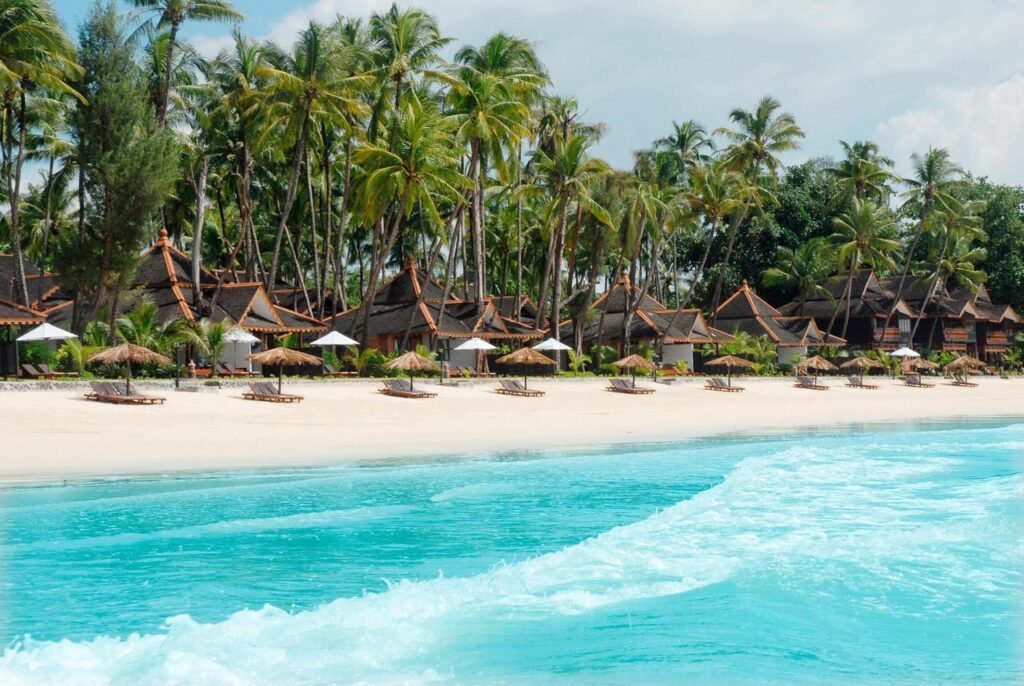 The Bay of Bengal is enough to say. As Myanmar has a beautiful coast, it will be a shame not to spice up your adventure with some sand and sea. Beautiful beaches, wide, covered with golden sand are the most amazing place to sit and witness the beauty of life. Offering a variety of water sports, your stay there can also develop into a water adventure.

One cannot squeeze in one month, everything Myanmar has to offer. Everyone who went had that urge to come back. Not only because of interesting sites but for the warmest people and the best fresh food you will taste in a lifetime.