The future of computer graphics is going to rely on clever hardware and software tricks to get the most power from processors. A good example is Nvidia’s deep learning supersampling (DLSS), which reconstructs an image from a lower-resolution source using machine-learning algorithms. Another, newer instance of this kind of tech is AMD’s FidelityFX Super Resolution (FSR), which applies various sharpening techniques to also make a lower-resolution image look better.

But how does FSR stack up against DLSS? We can finally compare them head-to-head thanks to an update that brings FSR into Marvel’s Avengers. And the results are about what I expected.

DLSS is proprietary to Nvidia GPUs and relies on dedicated hardware to process an AI algorithm. Super Resolution is a software-only solution, so it can run on just about any modern video card. Despite their fundamental differences, both FSR and DLSS enable players to unlock higher framerates while maintaining a higher-resolution experience.

In side-by-side comparisons, Nvidia’s tech is better — and often, it looks like real magic. But my biggest takeaway is that AMD FSR is good enough.

For this comparison, I’m going to focus almost entirely on image quality instead of framerate. Both FSR and DLSS get you a lot more frames. FSR tends to get slightly higher frames on average, but DLSS images tend to look better. So it’s not exactly ever a like-for-like comparison. So, for now, let’s take a look at how these technologies render visuals. 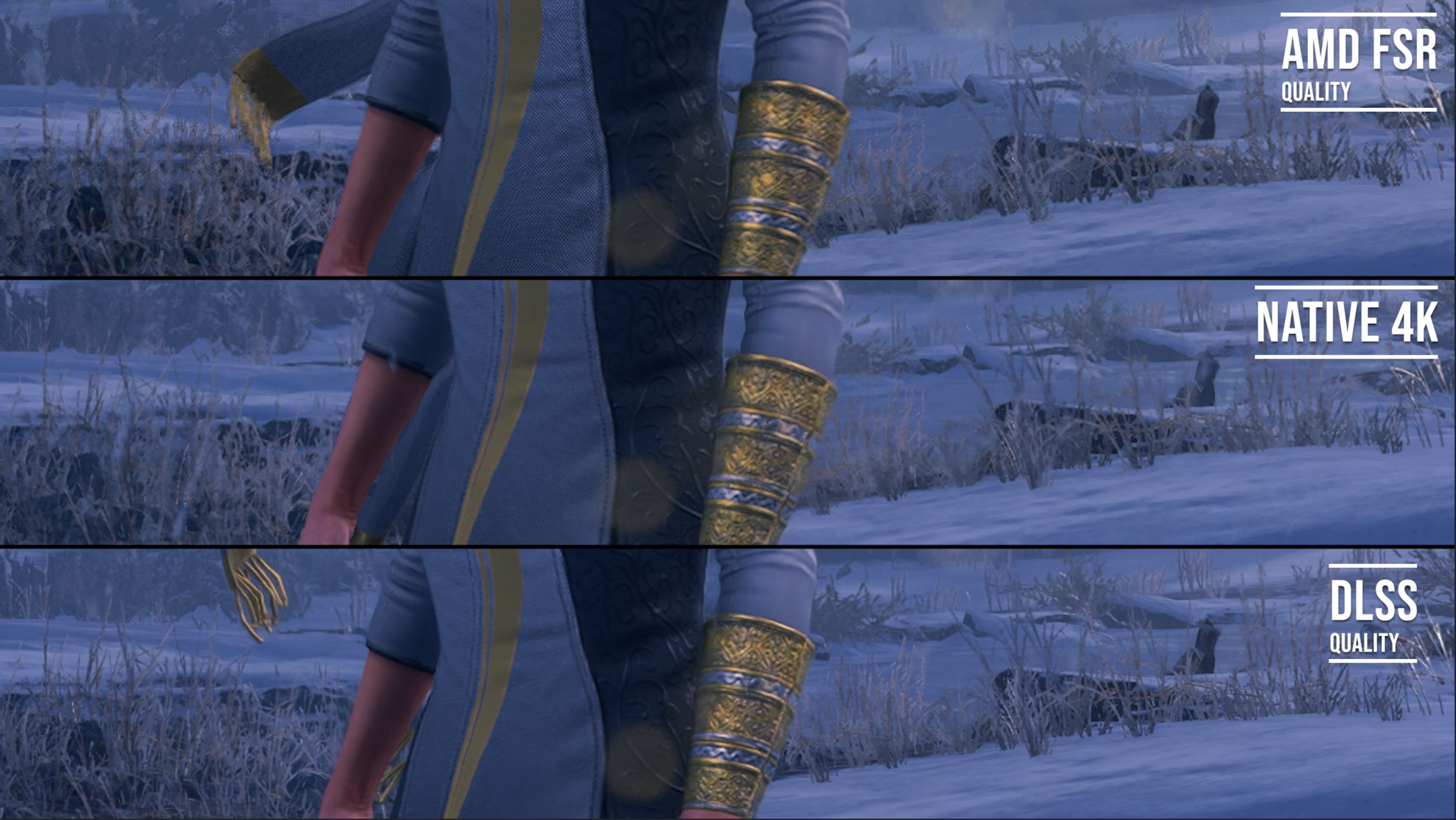 Above: Look at the grass to the left of Ms. Marvel.

In the image above, which you should open in full screen, you can see the difference between native 4K and FSR and DLSS both in their quality modes at 300% zoom. It’s important to note that Quality is DLSS’s highest setting and FSR’s second highest behind Ultra Quality. I’ll compare that next.

If the images all look exactly the same to you, keep in mind that is the idea. I’ll keep repeating that FSR is good enough even if DLSS blows me away when we start diving into the details. If you want to see why DLSS is so impressive, start with the gauntlet on Ms. Marvel’s arm or the stitching on her shirt. If you look closely, you’ll see that FSR blurs those details. The design on the gauntlet is kind of a sludgy mess compared to 4K. But DLSS, meanwhile, actually has even more detail than the native 4K.

And that is DLSS’s secret versus FSR. Nvidia is using machine-learning to re-construct an image using extra, external information. FSR is simply trying to upscale from a lower-resolution image. So DLSS can sometime rebuild its image to look even better than actual 4K while also getting a better framerate.

Another example of this extra detail is in the grass to the left of the character. DLSS looks sharper than native. And FSR looks even noisier with some dithering that makes it look like the image is rendering through a screen door. 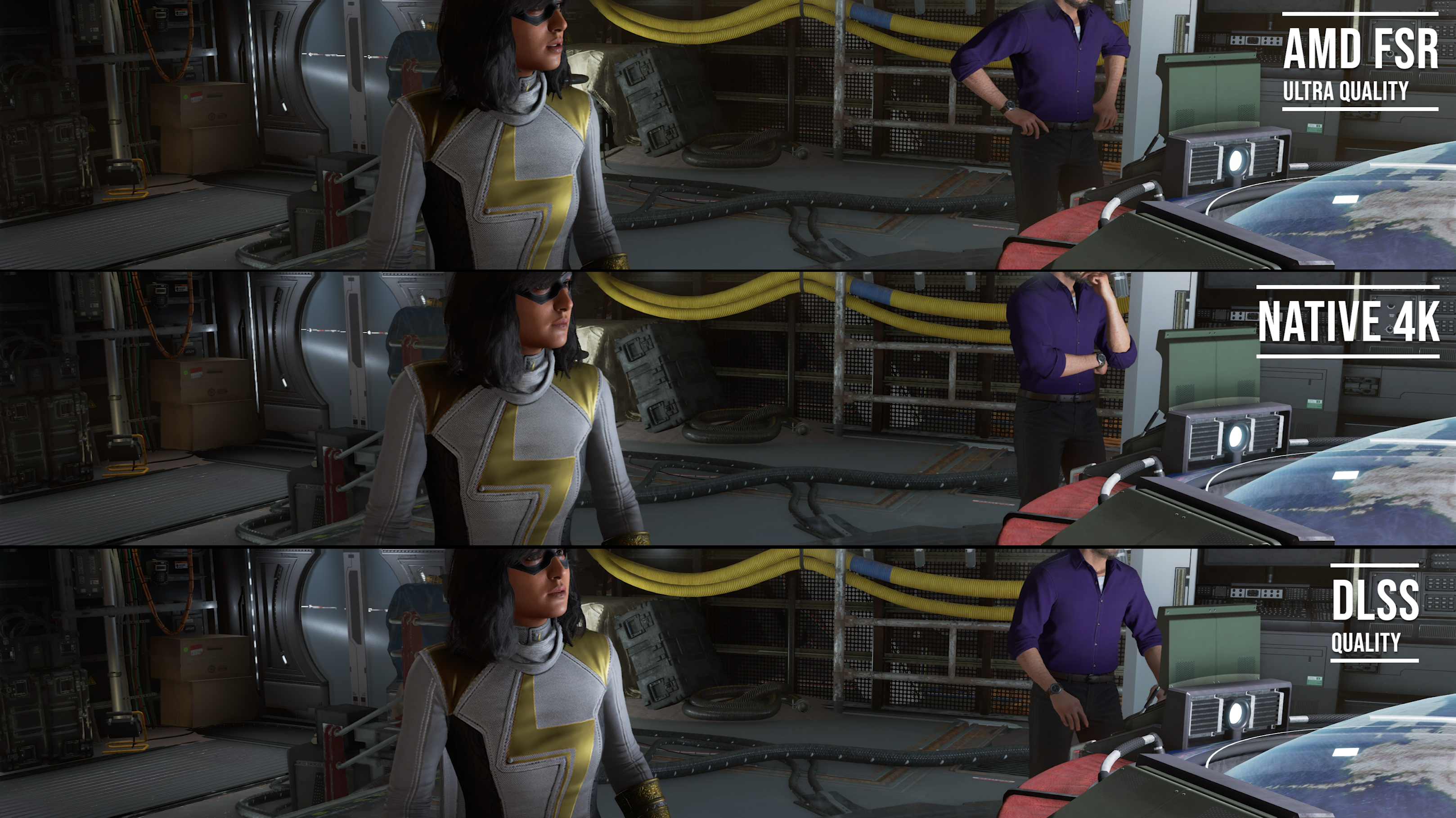 Above: FSR Ultra Quality vs. native vs. DLSS Quality.

At Ultra Quality, FSR is virtually indistinguishable from native 4K and DLSS Quality. I think you can see some extra sharpness in the very fine details in the DLSS version. For example, the lines on the grate on the far left of the frame. Or the label on the box just above that grate. But you have to get in very close to see those differences.

But while FSR and DLSS are difficult to tell apart on their higher settings, DLSS definitely does a much better job of retaining that native 4K quality as you drop down the settings. I would still argue that you’ll struggle to tell FSR Balanced and DLSS Balanced apart during action-heavy gameplay, but FSR is definitely less defined. For an example of that, look again to Ms. Marvel’s stitching and the rocks behind her on the left.

These textures just look slightly more blurry than the other examples. 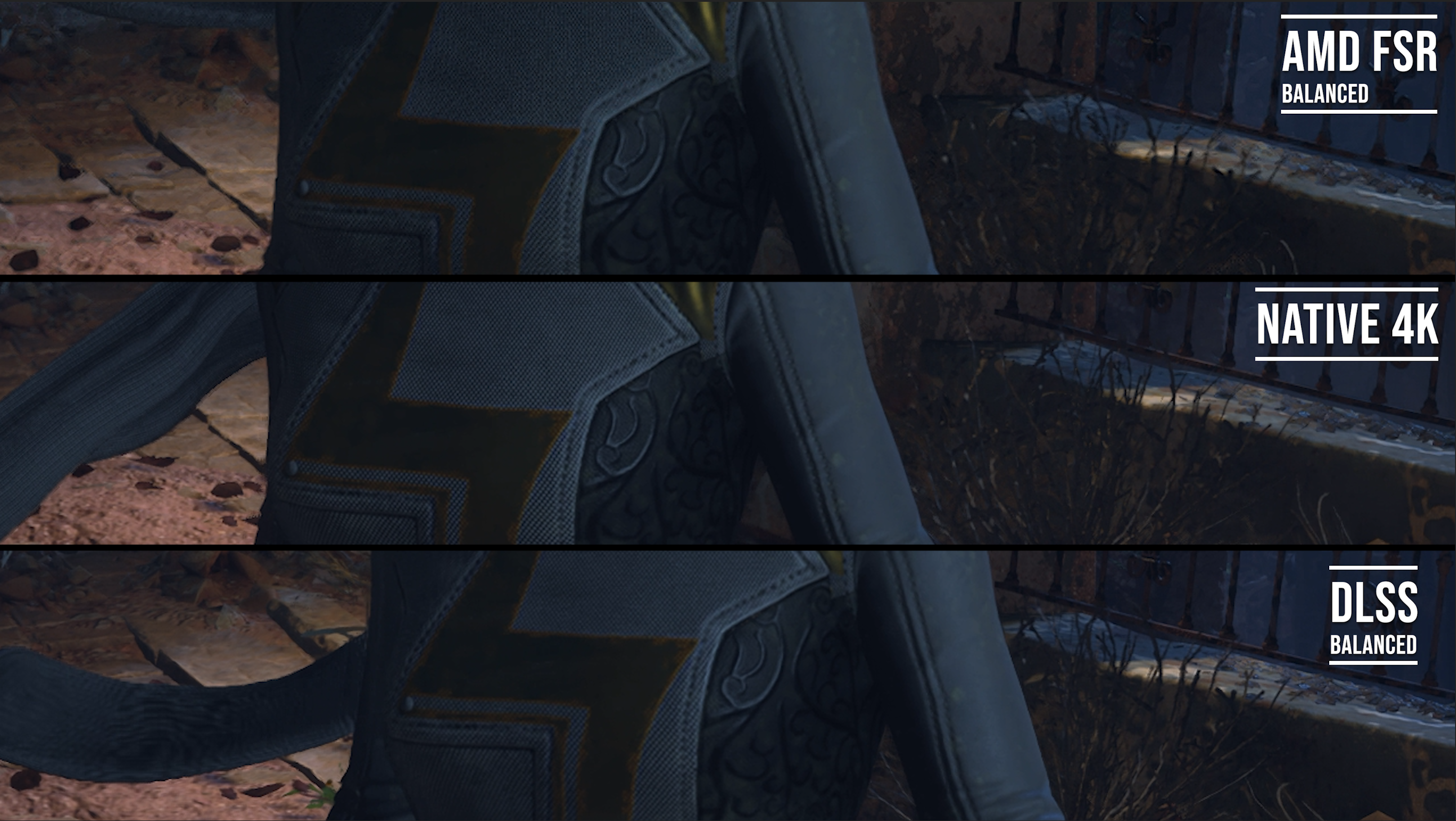 But I get it, you want to know about the framerate. On the Balanced setting, you get about 10%-to-15% more frames per second with FSR versus DLSS. But both are significantly faster than native 4K. You can see some of those details in the image below, but also, you can see how hard it is to tell the difference between the various rendering methods. 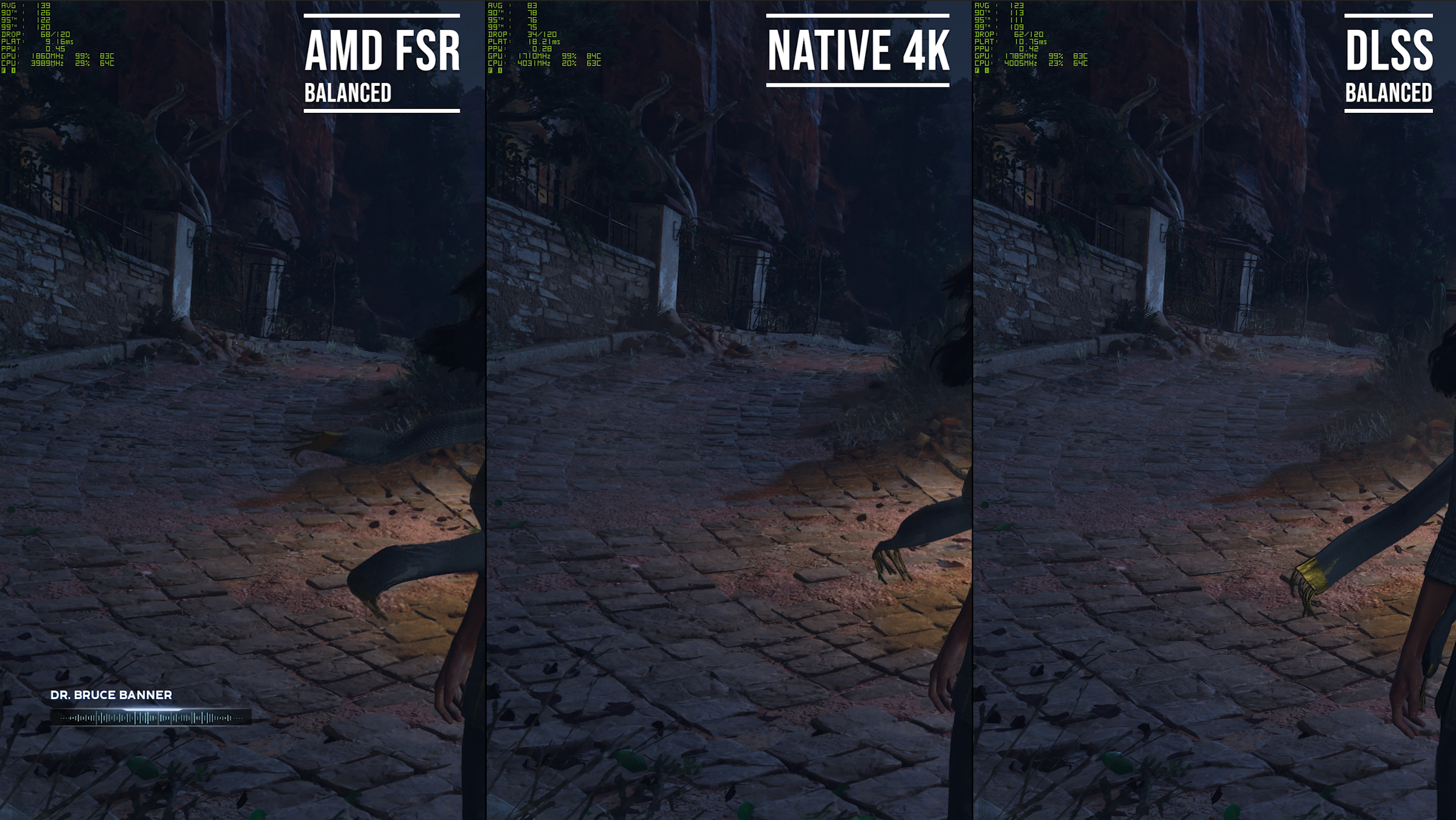 FSR is great, even if DLSS is better

Based on what I’ve seen, DLSS tends to be better, but that is no where near the full story. First, you need an Nvidia graphics card to use it. FSR works on almost any modern GPU. And while DLSS is probably better on lower-powered GPUs, that doesn’t help you if you’re using a GTX 1060.

On more powerful GPUs, where you can get away with using the quality settings for FSR and DLSS, the difference is minimal and you’ll get a better framerate for equivalent image quality with FSR.

But I’ll try to simplify it. If I have DLSS and FSR as an option, I will likely choose DLSS. Even if I need a higher framerate, I would rather turn down DLSS than switch to FSR in most cases. But if FSR is the only option, I would never complain. It’s good enough for me, and I expect it is more than good enough for the majority of PC gamers.

Pokémon Sword Shield: How To Get The Different Versions Of Meowth

Among Us Is Now Available On Xbox Game Pass For PC