Home » News » Before Final Fantasy, Square Made An Aliens Game

Hear the name SquareSoft and your mind is immediately flooded with images of quality, beloved RPGs. Final Fantasy, Secret of Mana, Chrono Trigger, Xenogears, Vagrant Story. But back in 1987—not long after it was founded—the Japanese studio developed something most people seem to have forgotten about: an Aliens game. Launching exclusively for the MSX, this was one of several digital spin-offs of James Cameron's action-packed sequel. But this one had a harder time finding a worldwide audience, as it was only ever released in Japan.

Square was a very different company in the mid-to-late '80s. It had yet to find its niche with fantasy RPGs, and was trying its hand at everything. There was Cruise Chaser Blassty, a curiously named first-person mech battler with RPG elements. (Side note: this was the first game legendary Final Fantasy composer Nobuo Uematsu ever wrote music for.) Alpha was a sci-fi text adventure set in a post-apocalyptic future. King's Knight was a vertically scrolling shooter with a medieval setting. Then there was Aliens: Alien 2. 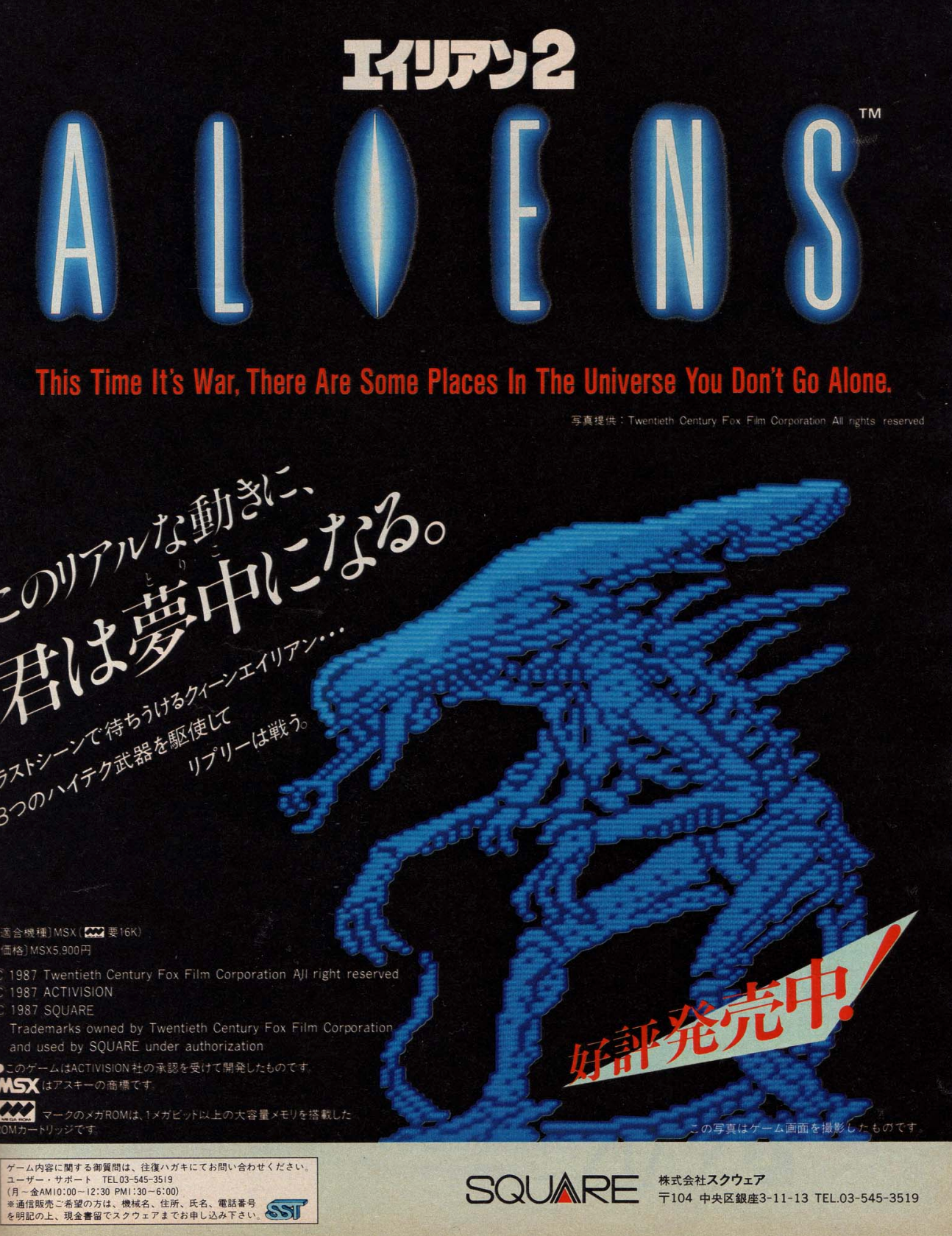 No, I'm not sure why they felt the need to add 'Alien 2' as a subtitle. Perhaps something was lost in translation there. Like most licensed games of the era, Square's take on Aliens is very loosely based on the events of the film. You play as Ellen Ripley, toting a pixelated pulse rifle, and must rescue Newt from the alien-infested colony of Hadley's Hope. This being a game from the 1980s, there isn't much to it. It's a side-scrolling shooter in the most primitive sense, with a dash of platforming thrown in. They loved that shit in the '80s.

As Ripley makes her way across the surface of LV-426 and into the stricken colony, she has to fight off facehuggers popping out of eggs, xenomorphs, and freshly-hatched chestbursters. Occasionally the words 'HUGE HOSTILE BODY APPROACHING' will flash menacingly on the screen, heralding the arrival of a repeating mini-boss: the alien queen. Even in single-colour, low-res pixel form this hulking, screen-filling monstrosity looks intimidating. At least until it moves: the goofy animation makes it look like a drunk uncle dancing.

To Square's credit, there's some impressive detail in Aliens: Alien 2—at least for the time. Kill an enemy and it explodes with a satisfying explosion of green acid blood. Captured survivors hang gruesomely in nests, waiting to give birth to yet more alien spawn. Xenomorphs can climb on ceilings and walls, making them tricky to target. A lot of movie-based games from this period feel like sloppy rush jobs, farmed out to launch alongside a movie, but it's clear SquareSoft put some effort into this one. Hardly a classic, but better than a lot of '80s Alien games. 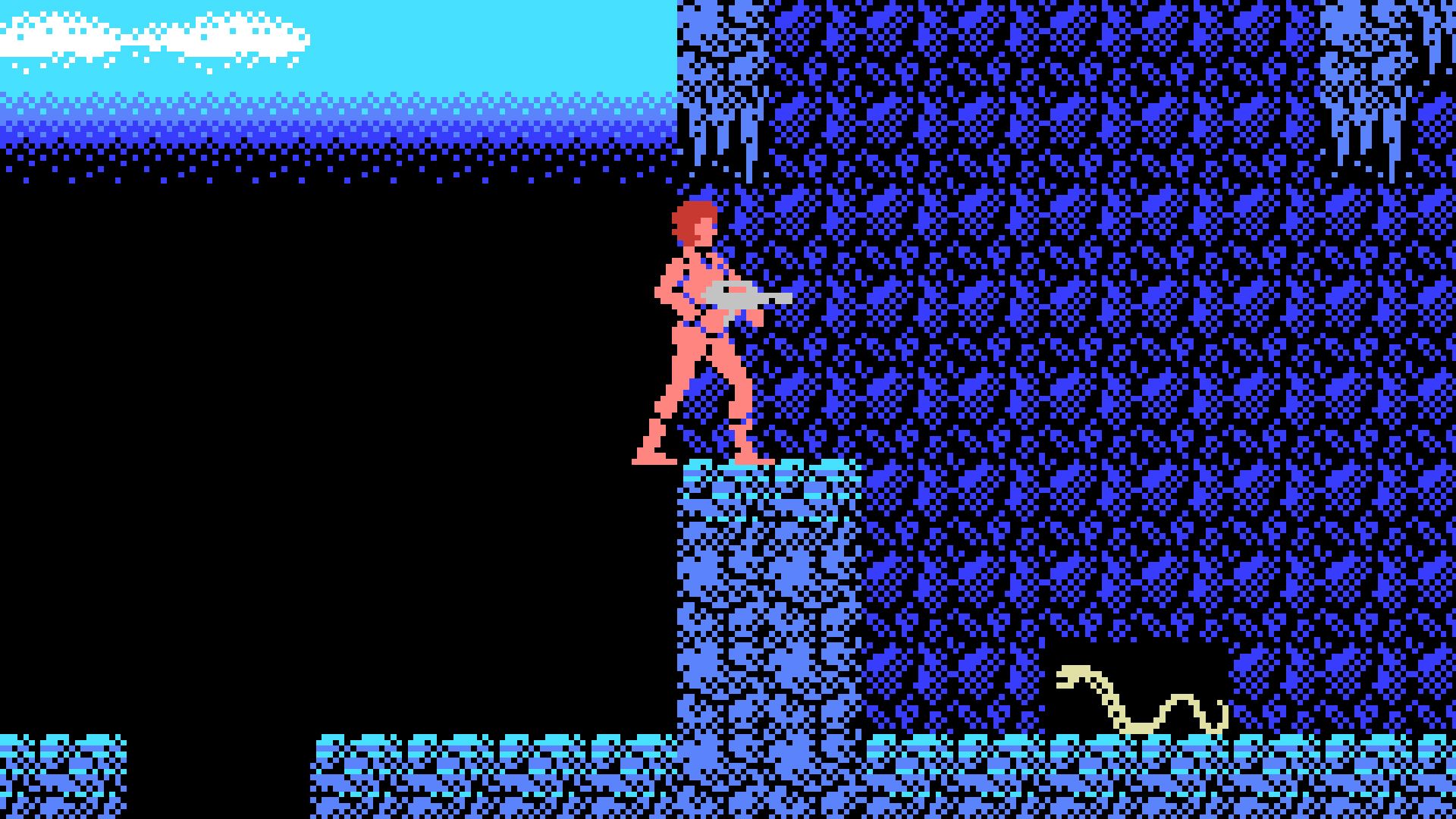 Beat the final level (which only takes around 15 minutes if you don't die too much) and you're rewarded with a cute scene of a reunited Ripley and Newt running into each other's arms. The camera pulls up into the night sky and a text epilogue describes the events of the end of the movie, where Newt, Ripley, and Hicks escape the planet alive, barely, having dealt with the menace of the alien queen once and for all. Just don't spoil this heartwarming moment for yourself by immediately thinking of what happens to them in Alien 3.

Aliens: Alien 2 (I'm still not over that title) isn't exactly a highlight of SquareSoft's estimable back catalogue, but it's an intriguing moment in history for the company. Kingdom Hearts aside, this is a studio that doesn't typically make games based on other IPs. I'm not sure how or why this deal with Fox was made back in '87, but the result is a very decent arcade shooter that is more enjoyable than many other attempts to turn Aliens into a video game. It's baffling that it never made it outside of Japan, though. Western audiences would've loved it.

Battlefield Bad Company 3 coming to PlayStation 5 and the next-gen Xbox?