Blood’s Flare Gun is a sight to behold. With a right click you fling eight fireballs into a crowd of undying monsters, setting their 2D sprites alight as they continue to charge and swing at you, now with literal burning passion. As the flames die down, it’s revealed their demonic flesh has slipped off, leaving behind little more than a skeleton that soon crumbles into a pile of boney dust. It’s a beautiful sight that makes this starter pistol a weapon you’ll cling to most on your two-hour trek through this stylised 1920s boomer shooter.

Your arsenal is pretty standard ‘20s flair – a shotgun you’d find tucked away under the counter at any bar, and a tommy gun no doubt looted off the corpse of a mobster. Run out of ammo and you’ll be storming the gates of hell with a pitchfork, making you a different kind of angry mobster. These guns are great in a pinch, especially when you’re face-to-face with hordes of monks wielding their own, dressed in robes like Hot Fuzz’s angry townsfolk. But I still cling to that magnificent flare gun.

It flipped the pistol archetype on its head, something even revolutionary FPS games of the ‘90s like Half-Life couldn’t manage. In fact, most modern shooters still start you off with a bog-standard sidearm that you’ll quickly abandon in favour of flashier guns, be it Call of Duty’s Ray Gun or Fallout’s Fat Man. It’s safe to say that the flare gun still stands out, because rather than firing off the equivalent of nerf pellets, making it an obvious starter gun best saved for small critters, it remains important right until the credits roll. It doesn’t accomplish this by being a powerful hand cannon, but through killing enemies in a unique way that no other gun, no matter how much better, can. 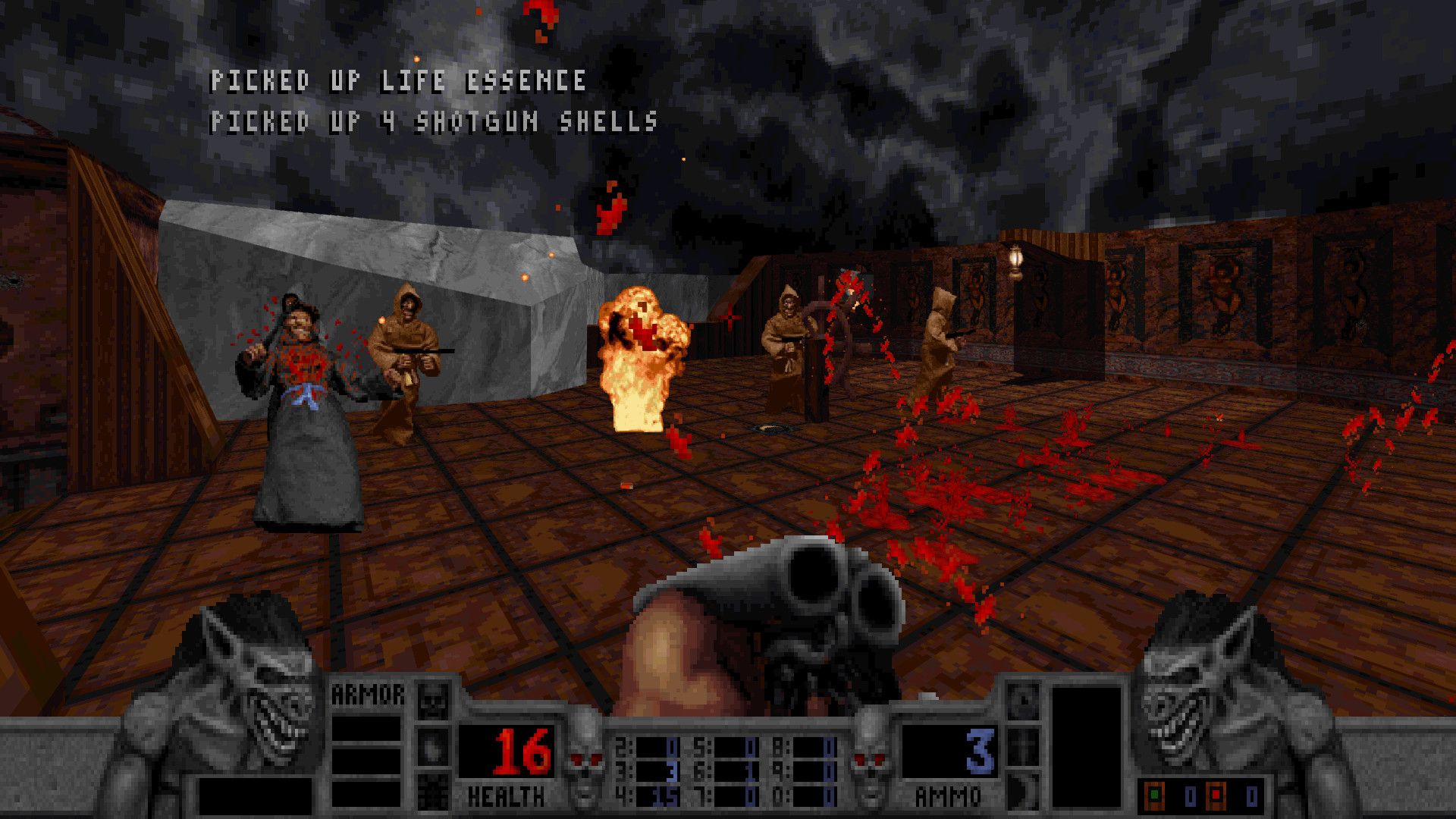 From start to finish, Blood has two enemy types – those that get back up and those that don’t. You either have to knock their heads off (which you can then kick around like a football), or set them on fire. Cue the flare gun. This gives it purpose, a purpose that never lets up no matter how far through the game you are. But given its status as a starter weapon, it comes with an important trade off – it can hurt you. If you use it in close quarters combat, firing off balls of fire into crowds with no wiggle room to retreat, you’ll find yourself getting washed away in those very same flames.

These are moments when you’ll pull out a pitchfork and prod at their heads until they pop clean off, or mow them down with a tommy gun to give you space for the flare gun, giving your arsenal a synergistic flare (wahey) rather than adamantly sticking with one weapon. All of this is done with a comparatively smaller selection than most FPS games, the flare gun acting as the glue that keeps everything together.

Blood understandswhat makes the FPS genre great, and it isn’t minute balancing to ensure every weapon is on a level playing field, or that you have to gradually get better and better gear to keep momentum. It’s the joy that comes from taking down hordes of enemies before watching their pixelated flesh crumble into ash. It’s a shame we haven’t seen many starter guns this experimental and unique since Blood, but it only serves to make it that much more fun to dive into, even 26 years later.

Games Inbox: Is Gran Truismo 7 still worth getting?