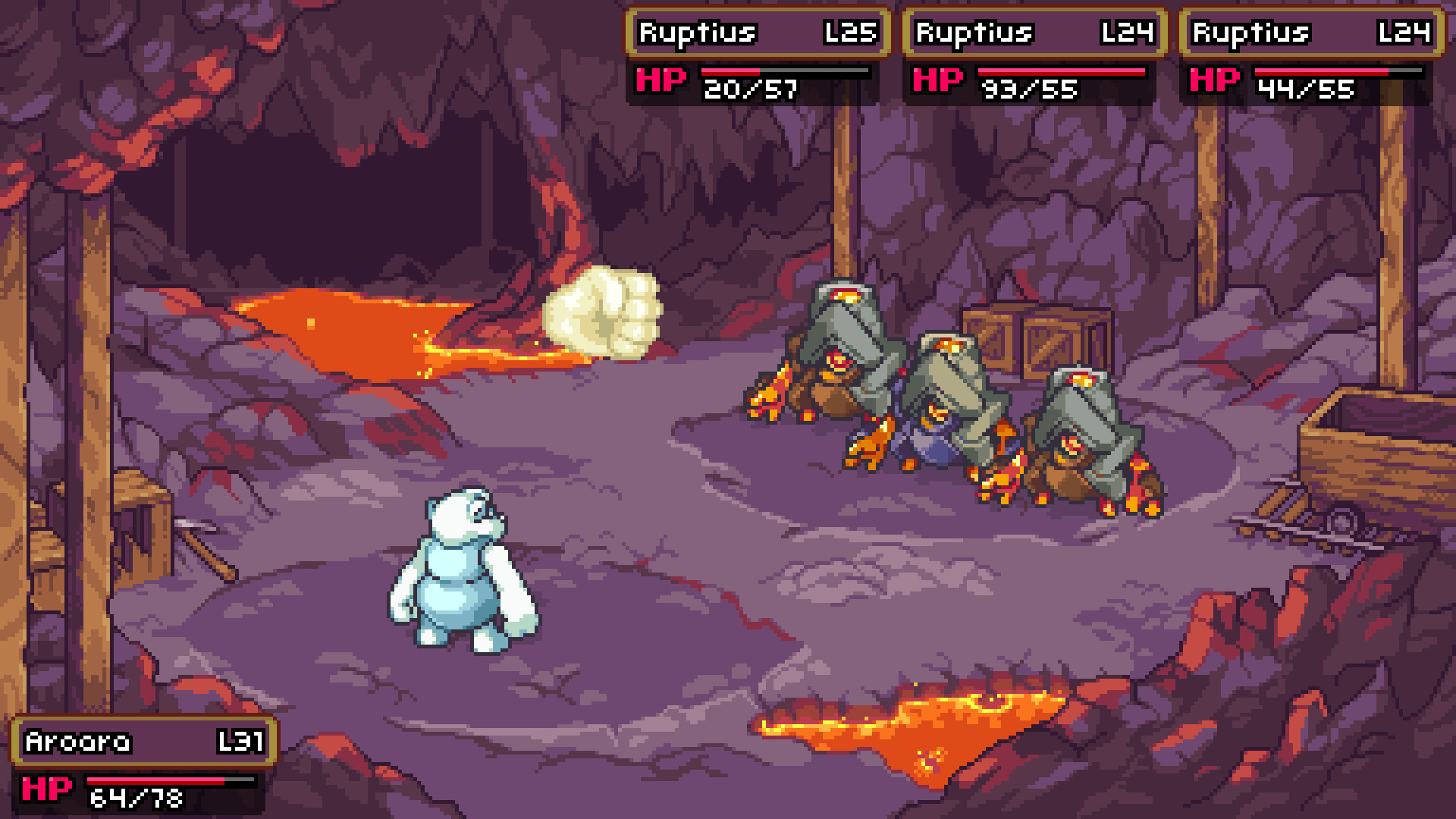 Now that Pokémon Legends: Arceus has taken some reserved leaps towards rewriting the formula, the next mainline Pokémon outings – the recently announced Scarlet and Violet – feel destined to be divisive. But while many scream for innovation and growth, from a franchise that’s clung to its core formula for decades, there’s just as many who mourn the move away from the accessible simplicity of the traditional mechanics.

Coromon is aimed squarely at the more conservative Pokémon fan, with a game that looks and plays like a late era Game Boy Advance title. Coromon is upfront about its Pokémon inspirations and knowingly emulates the battle mechanics, structure, and whimsy of Nintendo’s juggernaut. There are elemental weaknesses, monsters to evolve, and one-liner spouting trainers to battle, and it all starts on the same note of leaving your mother’s house for the grand adventure before you.

You might be wondering why no one’s contacted the lawyers already, but Coromon scatters just enough unique touches of its own to side-step Pokémon’s shadow. The first you’ll notice is the art style, which feels closer to the vibrant warmth of Stardew Valley than the top-down Pokémon titles. The 2D monster sprites are much better animated, with more variation in battle backdrops to match the area you’re exploring – from woodlands and electric laboratories to swamps.

There are also some subtle differences in the mechanics. As you level-up monsters through experience points, a separate potential meter fills to upgrade individual stats like attack, defence, or HP. It’s a minor inclusion but, for those who enjoy digging into the deeper aspects of the turn-based meta, it affords a greater level of personalisation over your team.

Your attacks are tied to a stamina bar instead of Pokémon’s PP system. Whereas that system limits attacks based on a set amount of uses, in Coromon each move costs a certain amount of stamina to execute. Once your stamina is depleted, you’ll have to rest for a turn (or consume an item) to replenish your stocks, leaving you vulnerable to attacks.

As such, the rhythm of Coromon’s battles feels slightly more strategic in that you’re encouraged to use powerful attacks sparingly to maximise the most efficient use of your stamina gauge.

Coromon feels designed for those who relish these small details. There’s an expanded equivalent to Pokémon’s Shiny variations, with Standard, Potent, and Perfect permutations of each monster to track down, each with different colour schemes. Coromon also does a far better job of explaining these intricacies than Pokémon does, directing you to a library which outlines the complexities of battling, type advantages, and new mechanics as they unfold.

Similarly, the quality-of-life improvements are tailored to combat frustrations of yore, like a stink ability to temporarily stop random encounters, a teleportation system from the outset for fast travel, a toggle to quicken the dialogue, and an option to permanently run.

This makes the old design ethos more palatable to a modern audience, although if you’re after something drastically different, you will be disappointed. Coromon is still very derivative at its core, with many locations, puzzles, and dungeons reminiscent of Pokémon and other Japanese role-playing games from the Game Boy Advance era. It’s a well presented throwback, with some neat touches, but for better and worse, it’s a very familiar experience.

That includes the monster designs (since, like Pokémon, they’re also largely based on real animals) but plenty are still memorable, especially the later evolutions. They’re less cutesy and more intimidating compared to most monster-catching titles, best showcased in each starter Coromon’s final evolution, which all have comically jacked-up physiques. With around 120 in total, there’s plenty of monster variety too.

While there’re varying difficulty options, Coromon’s default setting is no pushover. The adventure is structured around six Titan bosses, each preceded by a dungeon with trainer battles and some fun puzzles to conquer.

These multi-phased boss battles are essentially damage sponges which often require you to restructure your team entirely – to capitalise on a weakness or plan status-altering attacks to survive the long game. To some they may sound like a chore, but they give Coromon a tougher edge that many fans have wished Pokémon itself would adopt.

Coromon might not win over anyone who’s already exhausted by the traditional Pokémon role-playing experience, but for everyone else this is a charming remix of those core principles, purposefully designed for enthusiasts of the genre. If you’re after a throwback fix before Pokémon Scarlet and Violet, you’ll find Coromon scratches a familiar itch and even does a few things better.

In Short: An appealing riff on the Pokémon role-playing formula which, while a little too safe, has enough small deviations and improvements to justify its existence.

Pros: Charming art style and presentation. Multi-phase boss battles are a welcome twist. Large amount of customisation for your party and accessibility options.

Cons: Very derivative of Pokémon’s core mechanics and structure, with only minor additions to the formula. Feels very familiar.