Crisis Core: Final Fantasy 7 Reunion is unapologetic in its operatic tributes to the original Final Fantasy 7. In what can only be described as peak George Lucas fashion, Zack comes tumbling down into Aerith's church quite like Cloud will do so several years down the road. And so Crisis Core's plucky and excitable hero meets one of the FF7 series' overarching heroines face-to-face.

Chapter Four's a hefty one. What begins as a charming, if awkward, introduction between major characters escalates into a large combat sector back 'home' at the Shinra Building. We've got a lot of ground to cover, SOLDIER, so let's get moving.

Meeting Aerith And Catching The Thief 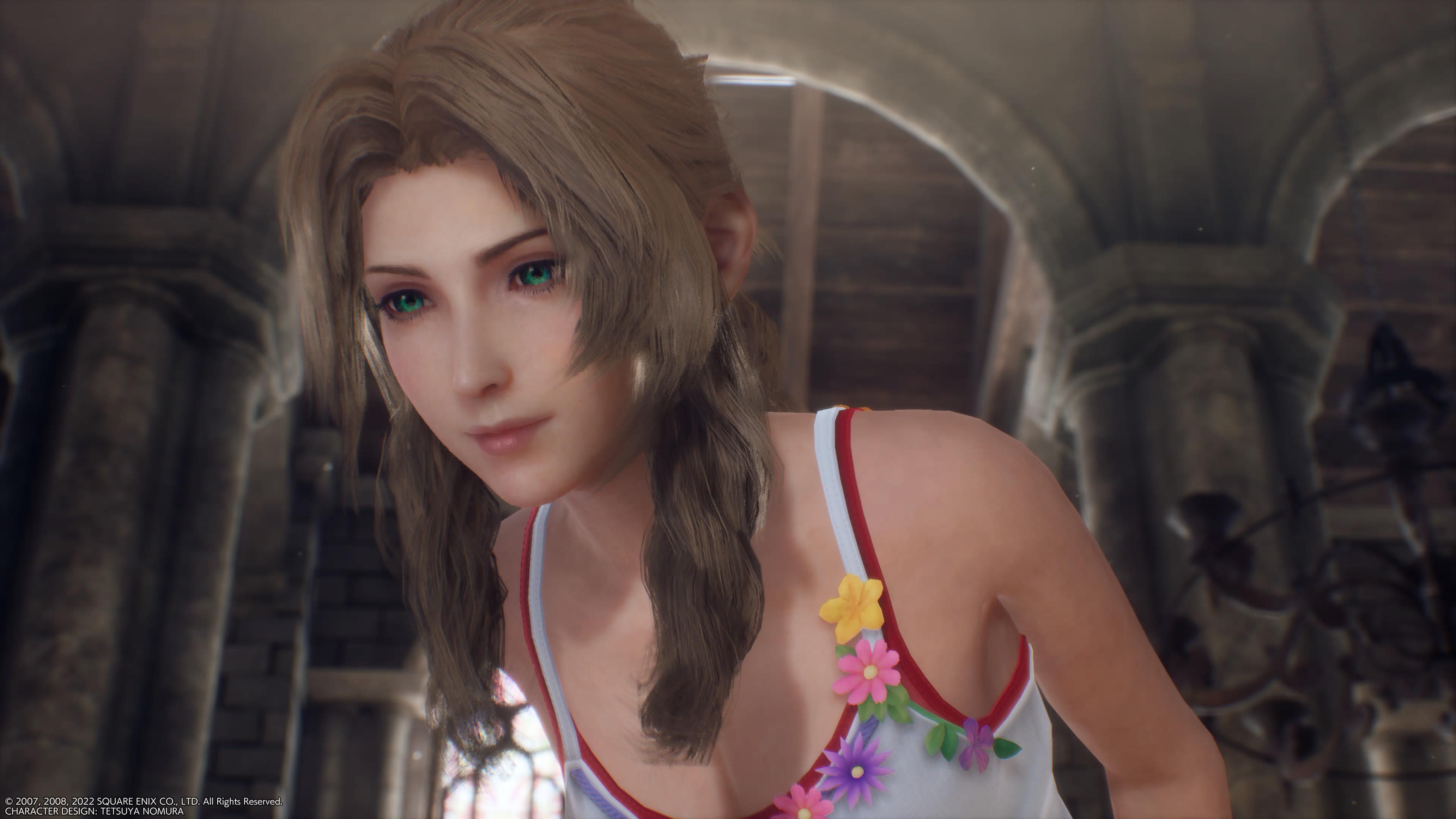 The first few scenes are all talk, so enjoy Zack and Aerith's bizarre initial chemistry, and tag alongside her en route to the market after they've departed her church. Aerith's AI here is a bit erratic, so don't be surprised if she scolds Zack on more than one occasion for either failing to keep up, or moving too quickly… even if you feel like you've done neither of these things.

Once the pair arrives at the market, a kid snatches Zack's wallet, which leads us to our first real interactive segment of the chapter. You only need to converse with a few of these decidedly unhelpful NPCs in the area before Aerith is hesitantly willing to move forward, but we recommend telling her to wait, and chatting with everyone.

That's because the more thorough Zack is here, the better Aerith will perceive him, which elevates her affection level in subsequent scenes throughout the game. There's little by way of tangible reward for this, but it tracks with the overarching canon, right? Aerith clearly had a real thing for the guy, as FF7 players know. Plus, it's cute. So, yeah.

You should also make Zack as gullible as possible — keep giving potions to the boy who's clearly pulling one on Zack until you've handed him at least five, as each one raises the affection rating. For the girl who is totally also pulling one on our guy, keep choosing to 'wait a little longer' ten times, for the same reason. Word clearly gets around after: Zack's dense, but he sure is kind. 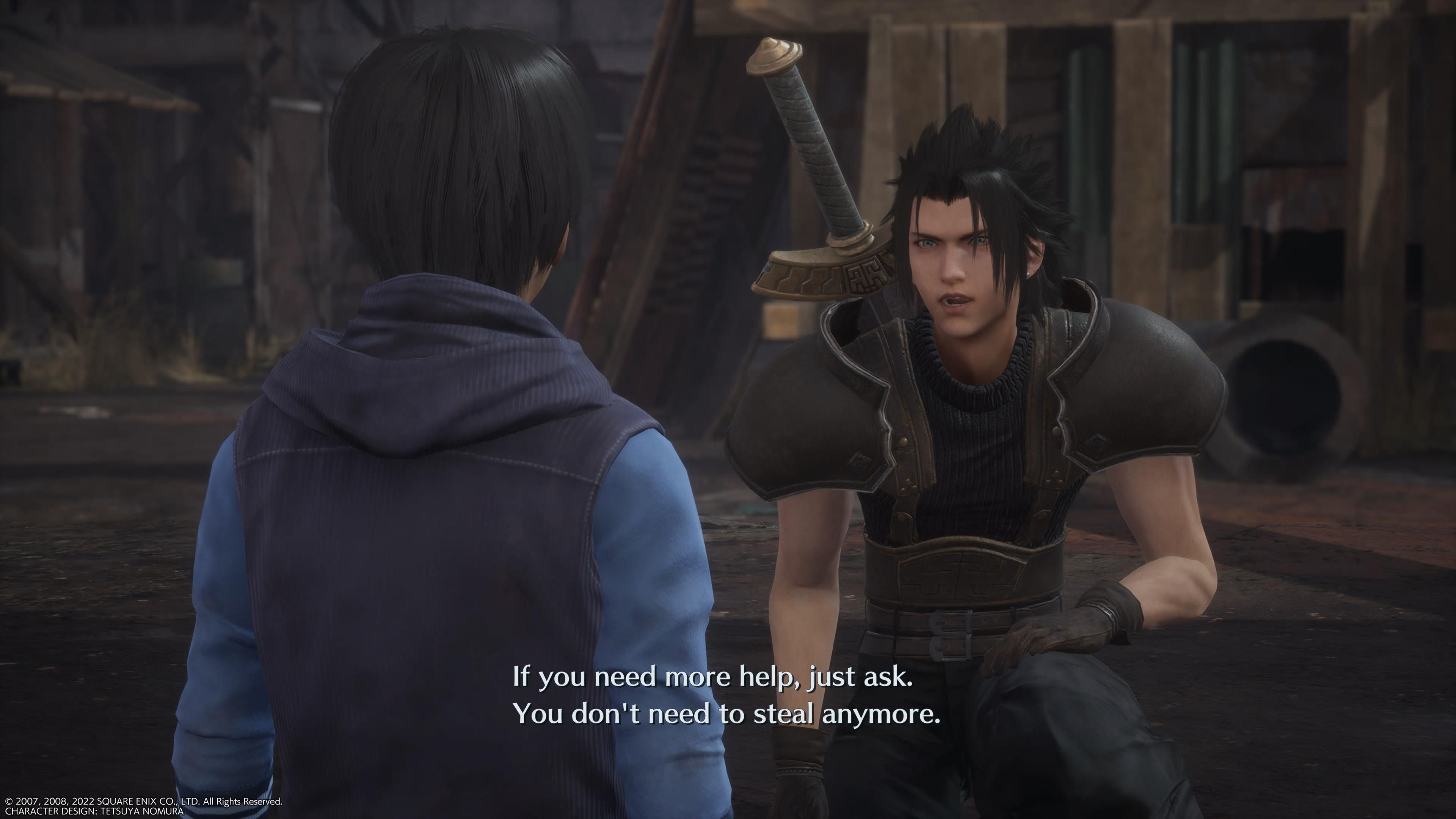 Once everything's said and done, Aerith brings the kid out into the open. Agree to eradicate the worms outside the gate, which really shouldn't cause you to break a sweat; they're a cinch. Return to the boy, grab that wallet, and get started on the next segment of Chapter Four.

If you haven't done the newly-unlocked missions yet from the Mission 7-2 chain, get going with them. You'll be able to give Zack two more accessory slots, as well as begin adding items to Materia Fusion. This is huge stuff, and will make the remainder of the game less challenging, guaranteed.

The Date With Aerith 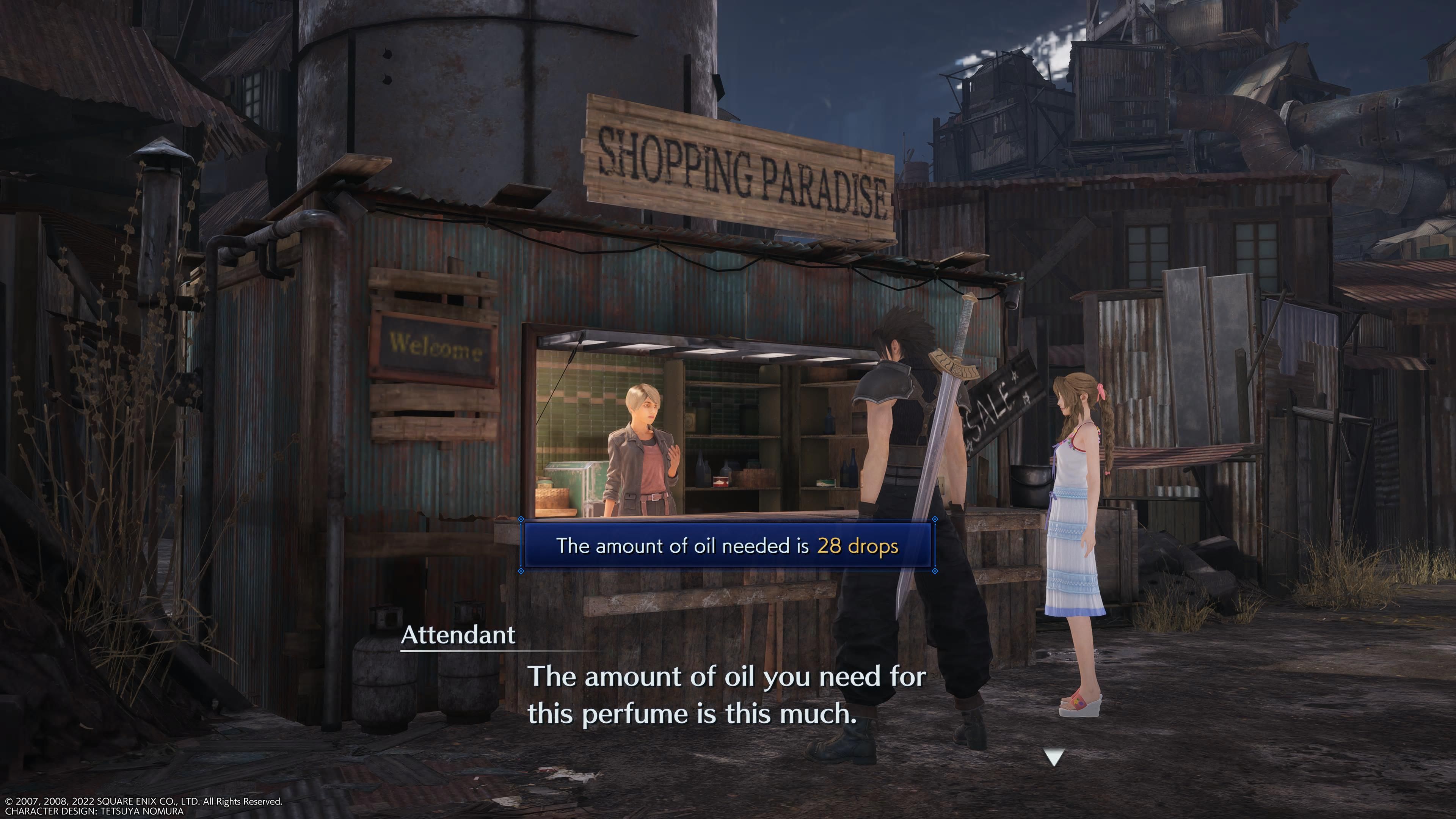 While the main goal here is to head to the park, there are three key interactions with the now much-nicer residents here in the market. Each involves a mini-game, and each mini-game can not only earn you rewards, but — again! — raise Aerith's feelings toward Zack. These three NPCs offer the following activities:

Ordinarily, we'd go into full detail on each of them right here. As it happens, however, we already have a guide covering every mini-game in Crisis Core: Final Fantasy 7 Reunion, including these. Rather than reiterating what has already been written, we invite you to make the most of this fun point in the story by checking it out (and bookmarking it for later mini-games as well!). 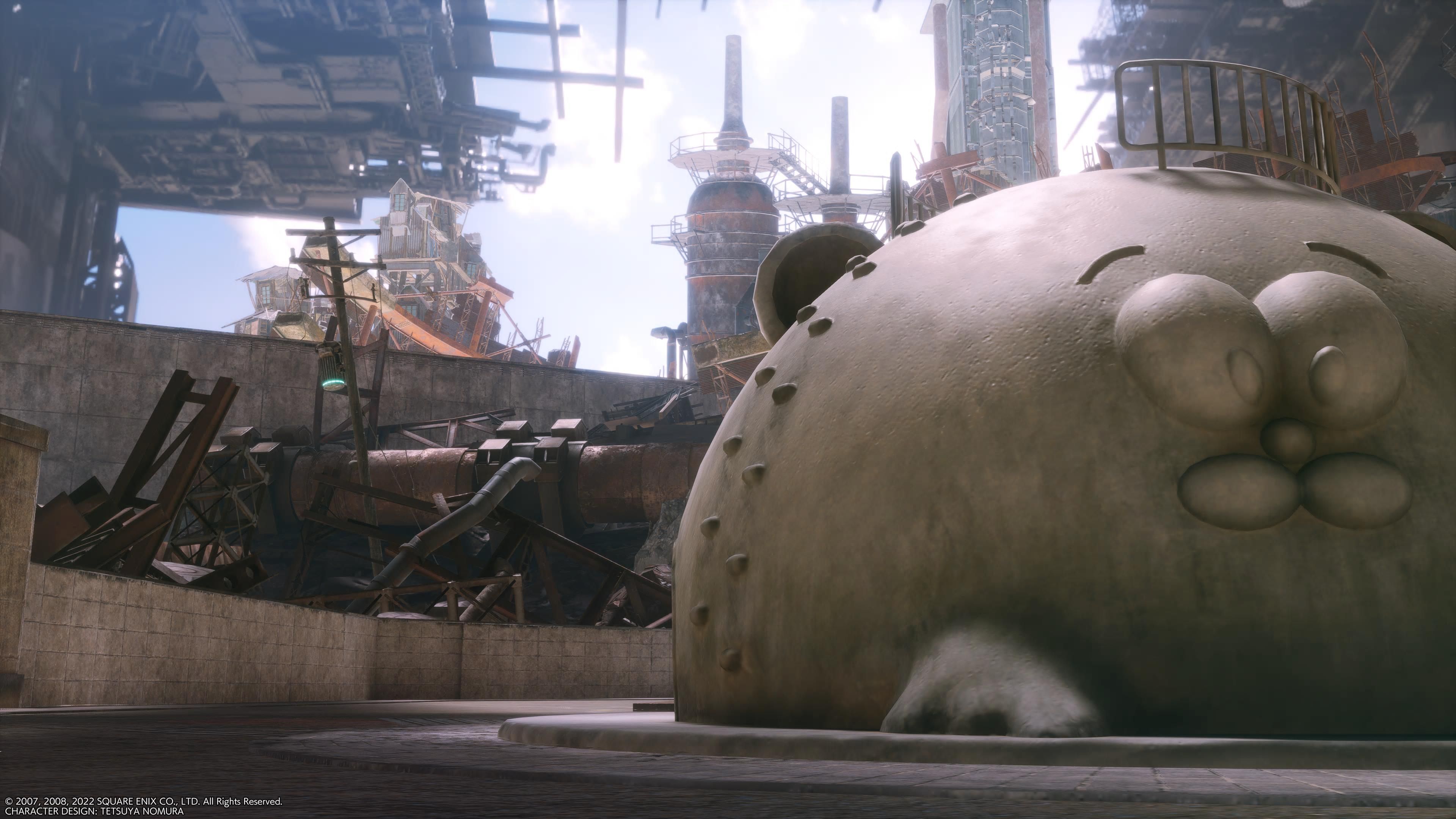 Follow through with the sequence of dialogue over at the Sector 6 Park, when Zack gets a call. It's time for some serious business out on the highway. 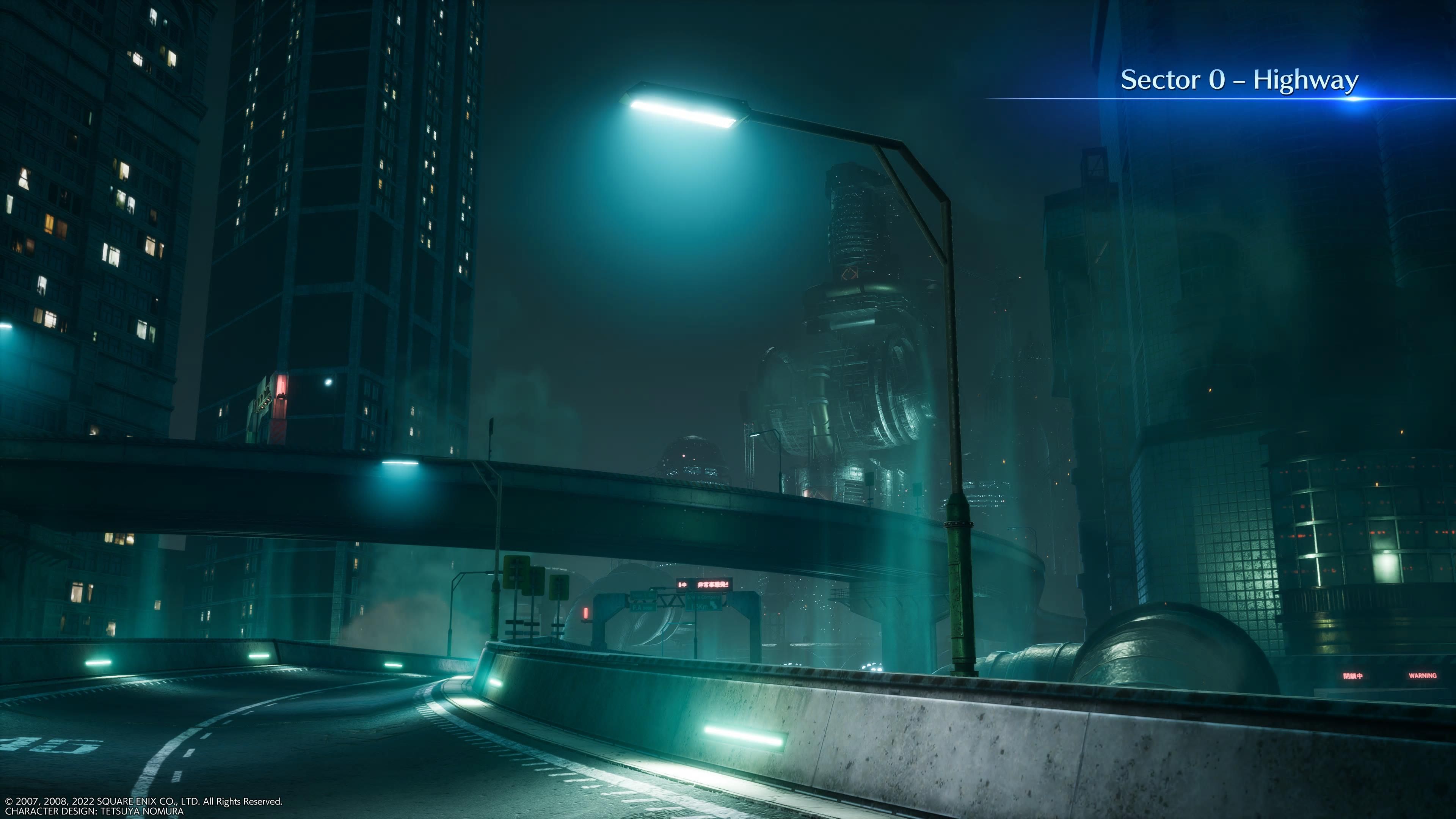 Most of the fights Zack encounters en route to the Shinra Building here on the Sector Zero Highway aren't worth writing home about, but the one issue to look out for is that, eventually, you'll be facing up to six of this G-Assailant foe at once. Aside from their knives, there's nothing much here that can really hurt you, but when there are this many of them, it can be difficult to dodge them all.

Our advice? Don't worry too much about it. Avoid what you can, but heal up when needed. The G-Assailants go down fast. The G-Warrior who appears thereafter is another story, with higher HP and deadlier attacks. But there's really nothing here you've not seen before; just take care not to become overly reliant on magic spells, lest it cast Silence. If that happens, you can, of course, wait it out and get back to casting; but frankly, G-Warrior's defenses aren't very high, so regular attacks work just fine. 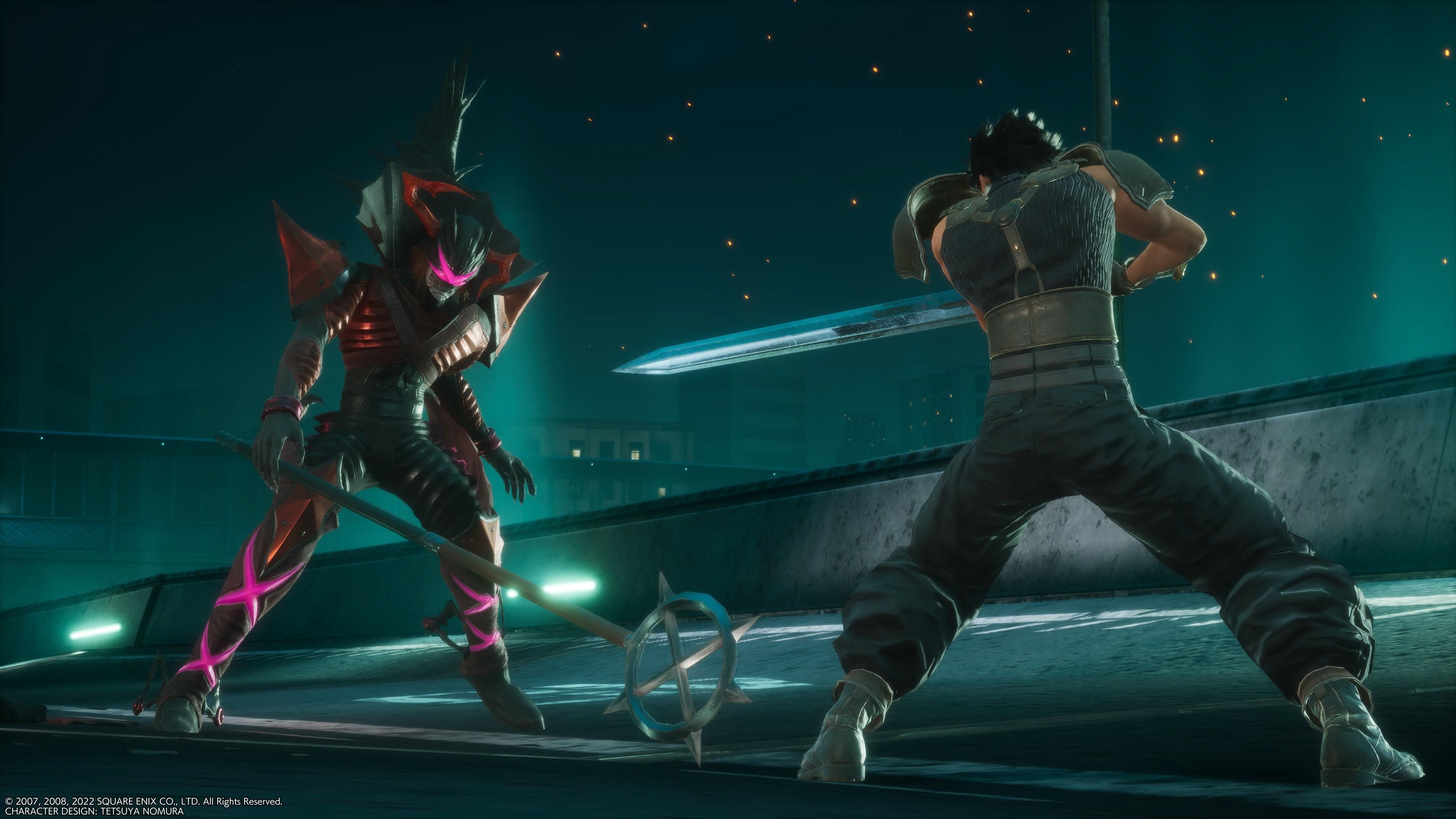 Nice of Angeal to give Zack a lift into the Shinra Building. Save your game here, and ignore the path that leads to a bunch of doors. They're locked, but we'll get to plundering here in a moment. For now, follow the critical path marked on your mini-map, emerging from an elevator to reach Hojo, whose safety is now Zack's paramount concern. Poor kid. 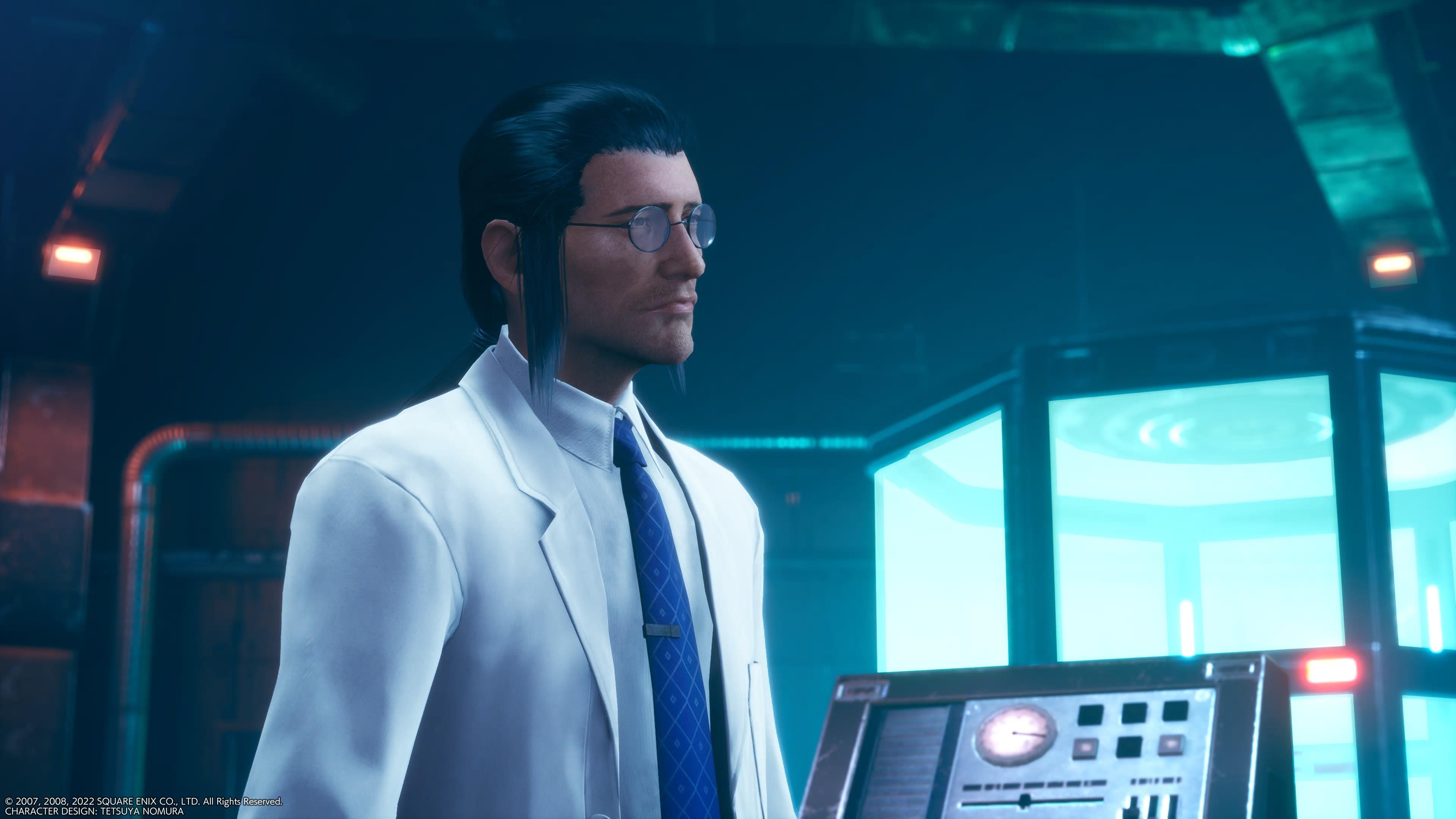 You'll now have four experiments to partake in, and while the notion of partaking in anything Hojo ever has in mind is indeed a risky one, we're going to do it, anyway. There are four buttons to press throughout Hojo's laboratory, so let's press them all, starting with the button on the device to the left of Professor Hojo. This is pretty easy to grasp; time Zack's interaction as close to the countdown hitting zero as possible for 100 SP. You'll get fewer points for lesser performances. Repeat as desired.

Near the elevator is the second button on our list. Zack's briefly warped away, or… something, and has to fight a bunch of worms using a different Materia lineup than you'll be accustomed to. Thankfully, these are the same lowly worms you fought earlier this chapter, so if all else fails, just whack them repeatedly with your sword, and they'll go down. 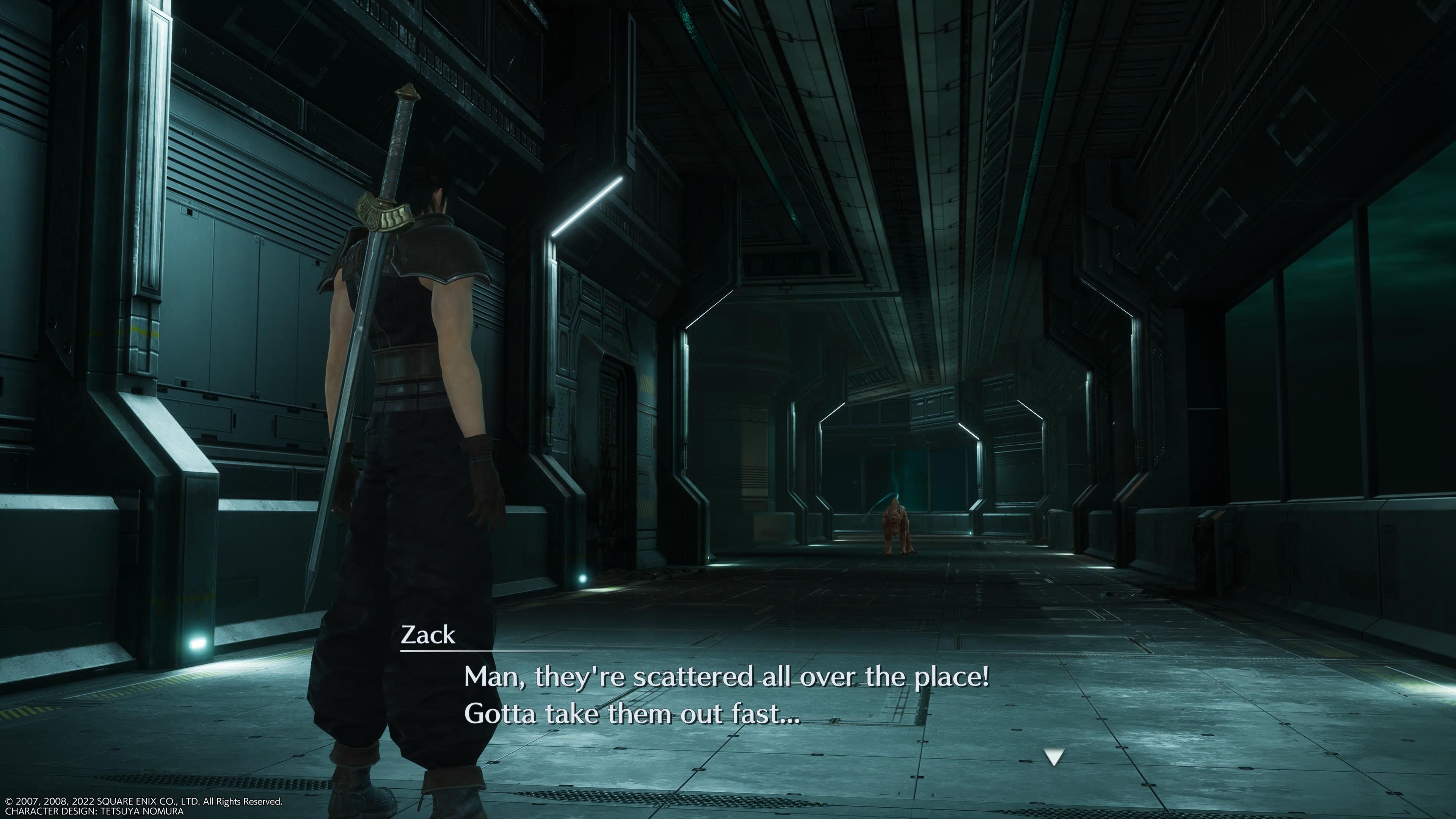 The remaining experiments are the most interesting ones. Near the big pod, press the button, which releases panther-like Experiment 97s on the floor below. The floor in question here is precisely the one you were unable to get loot from behind a bunch of closed doors from earlier, which means it's time to put things to rights.

You have to use the Steal Materia to acquire Jail Keys from each Experiment 97 before slaying it if you want the prizes tucked behind the doors. Note that it's entirely optional to do so, but if you ignore the valuables, your only gain from any of this is a bit more experience points and a few extra lines from Hojo. Definitely grab those goods. 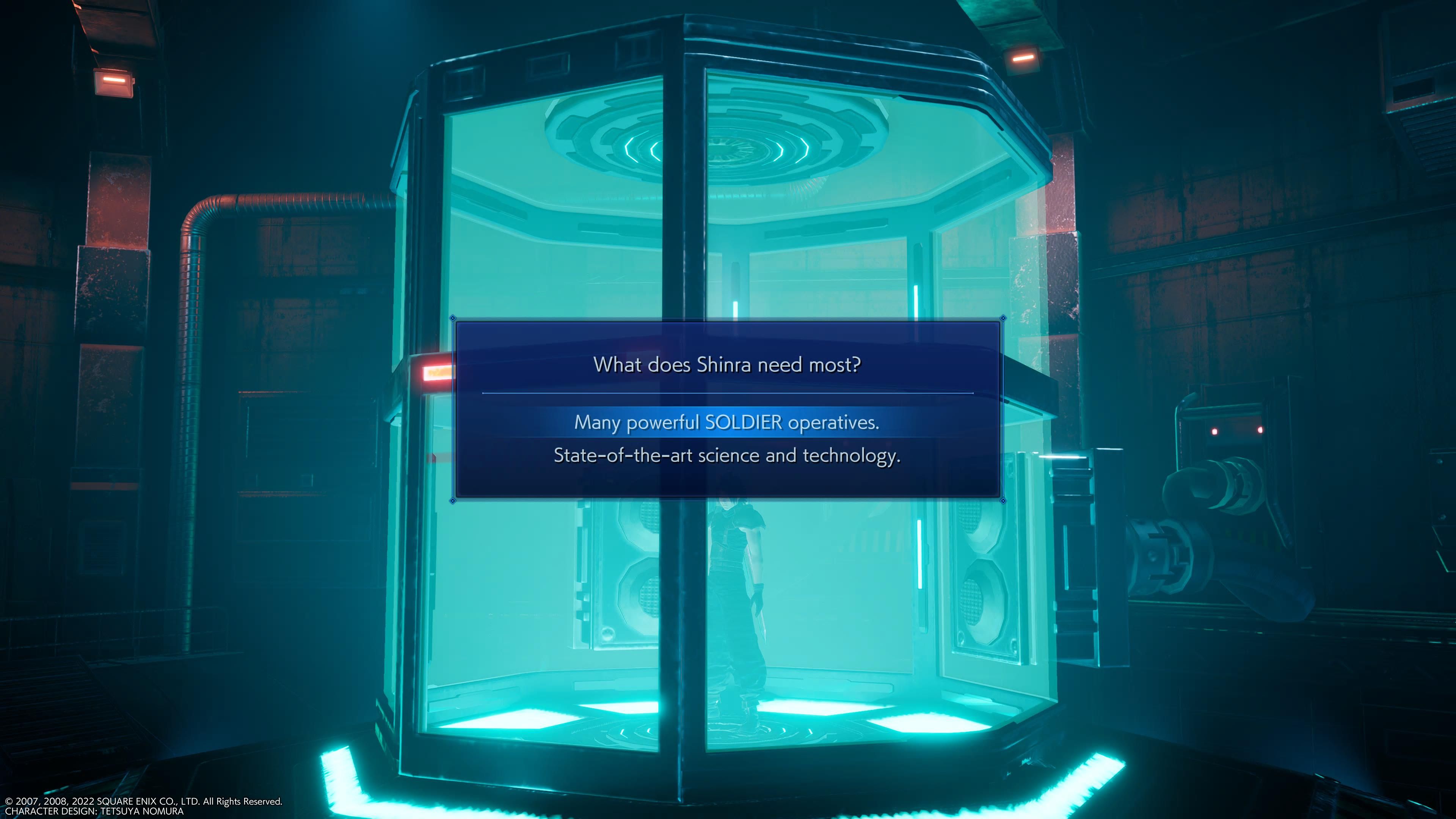 Lastly, interact with the big pod itself for a quick questionnaire that can affect how much SP Zack gains from Hojo upon completion. You can choose to be truthful to how you perceive Zack's thoughts here, which will net you some SP regardless. But there is an optimal path, that will earn you more with each answer, so for those who seek the optimal gains, here's what to pick:

With all four of these done, chat with Hojo again, this time accepting his proposition. Watch the explosive story bits that follow, which will bring Chapter Four to its finale in a boss battle against none other than… 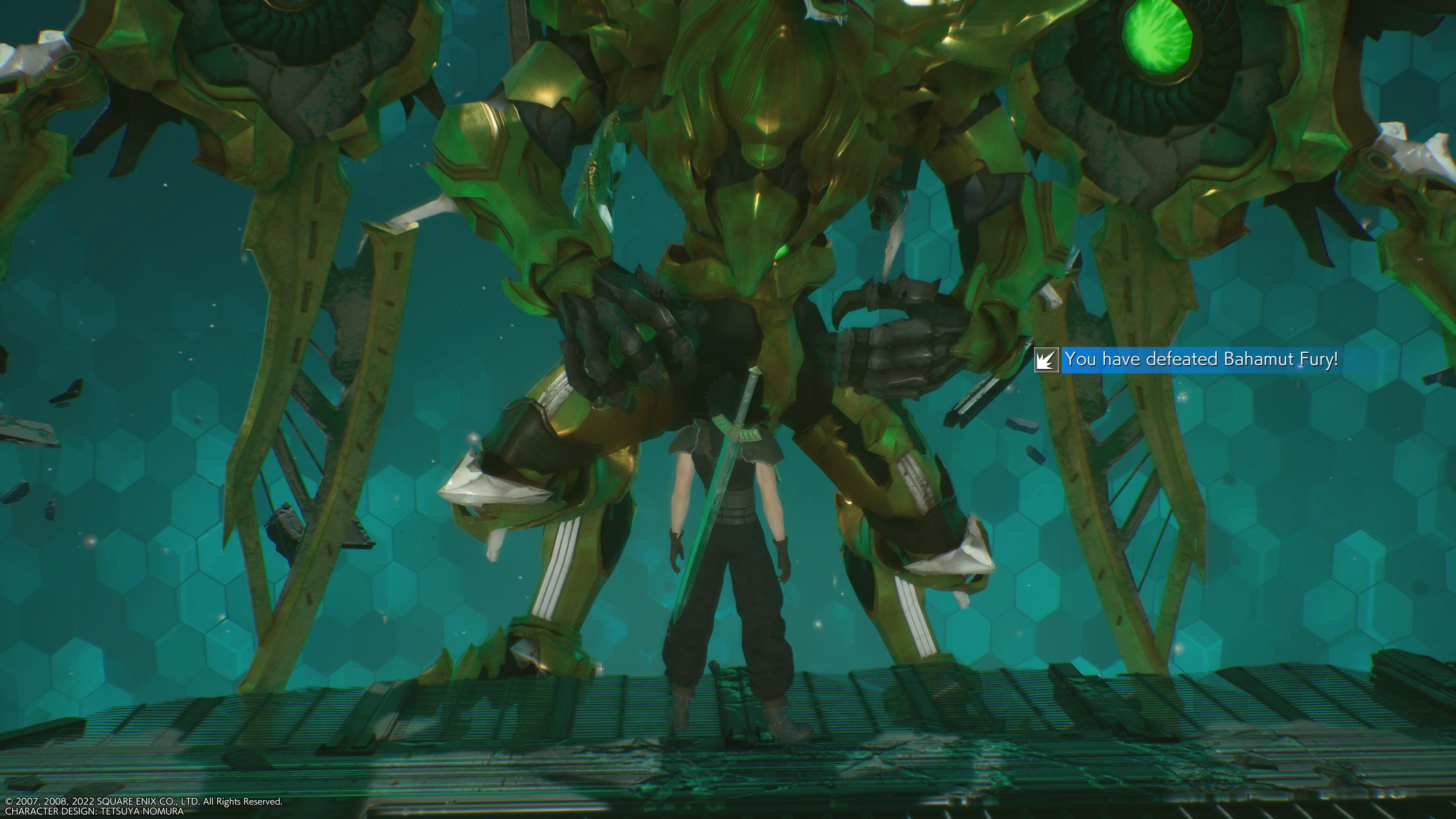 There's a slim chance that you've already rushed through Yuffie's optional mission chain, in which case, you've fought this big guy already, and at full power. If that's the case, however, you're drastically overleveled, and there's no sense in reading further. Just bash Bahamut Fury, furiously, and win.

For the rest of us, we recommend Regen to keep Zack's HP up, and if that's not an option, have a healthy supply of Hi-Potions (or Potions) to make up for it. Magic in general is not going to put much of a dent in Bahamut Fury, so you need to stick to physical attacks and AP-based moves.

Bahamut Fury's close-range attacks aren't the easiest to dodge, but you'll probably get into enough of a rhythm to look out for at least half of them. They're simple swipes to the left and right, as well as a tail attack that seems to trigger far less commonly, at least in our experience.

On the other hand, the rather lavishly-animated Exaflare is quite powerful against an average-level Zack at this point in the game, hence why Regen is so wonderful if it's available to you. If not, just get ready to heal up with items and/or Cura/Curaga immediately. Don't think about jumping back in for counterstrikes post-Exaflare; you likely won't have the hit points to spare.

There's a nice caveat to all this; following the amusing little 'sorry Aerith, bit busy' dialogue that led into this boss fight, Aerith's on Zack's mind the whole way through. Heightened emotions in her direction means you'll hit her Healing Wave Limit Break more frequently than any other, which helps further the very much mandatory healing duties here.

Modern Animation Is Right To Confront Our Collective Generational Trauma