Home » News » Cuphead: The Delicious Last Course – How To Defeat The Howling Aces

The Howling Aces will likely be one of the final boss encounters you face in Cuphead: The Delicious Last Course. On paper, this boss battle isn't the toughest of the expansion. However, this is a battle that actively interferes with your ability to control your character. We imagine a number of people are going to struggle greatly with this phase of the battle.

Thankfully, while your footing may not be stable while fighting against The Howling Aces, we can provide you with some of that much need stability by way of some effective strategies. And hey, if that final topsy-turvy phase is just too much for you, we can even show you a way to avoid it altogether. 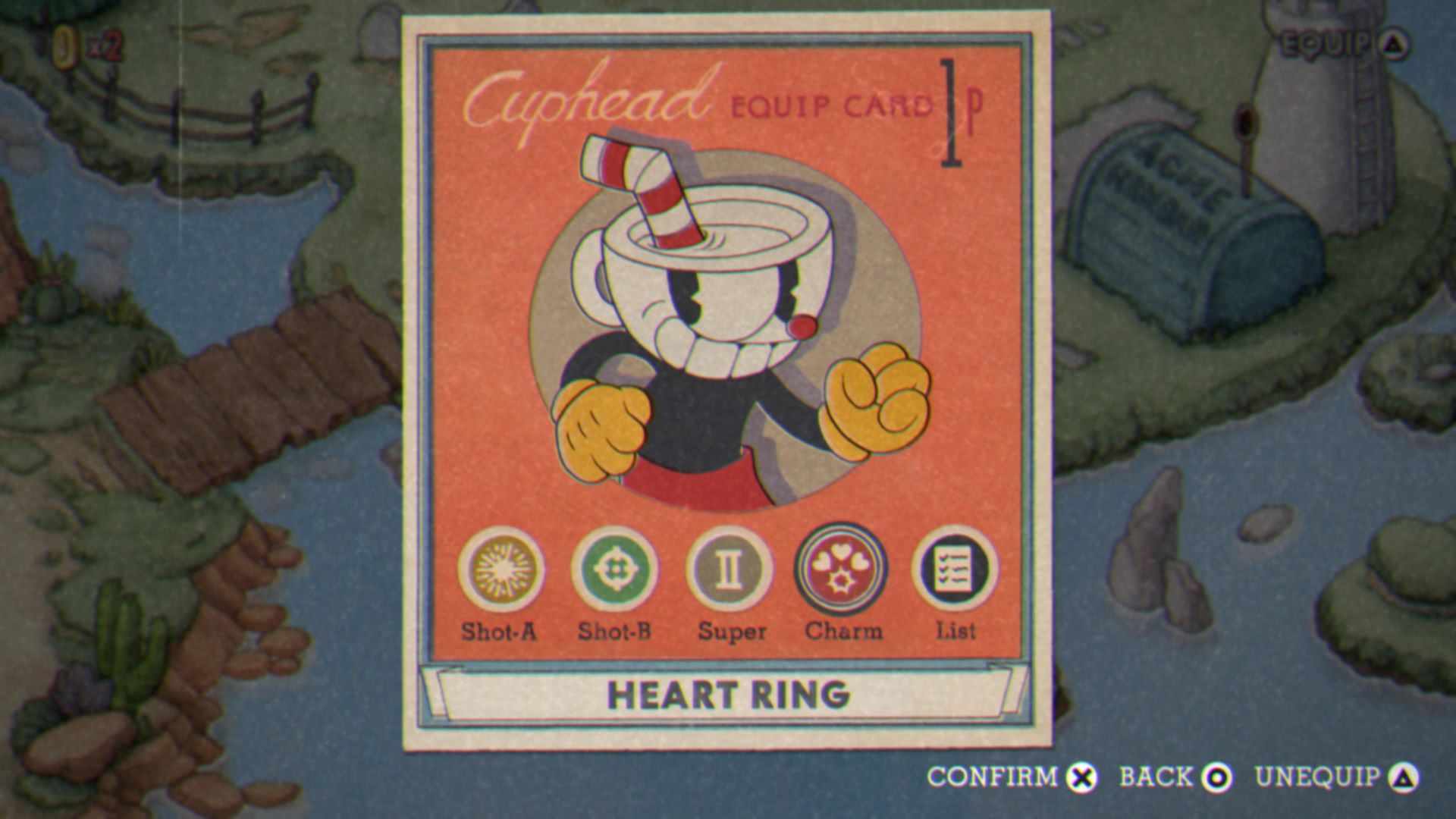 For this battle, you will want to take your heavy-hitting weapon of choice (we recommend the charge shot), and the classic Chaser shot. The Chaser is fantastic for this battle, as there are sections where you will need to dedicate an inordinate amount of brain power to dodging, and aiming is going to be difficult to manage on top of that.

We also recommend bringing the Heart Ring. There are a ton of easy-to-parry attacks, so you will be able to get the full three extra hearts effortlessly. Also, you may want to use the second super for this battle. It may come in handy during the final phase.

Phase 1 – How To Beat Crossbones The Bulldog 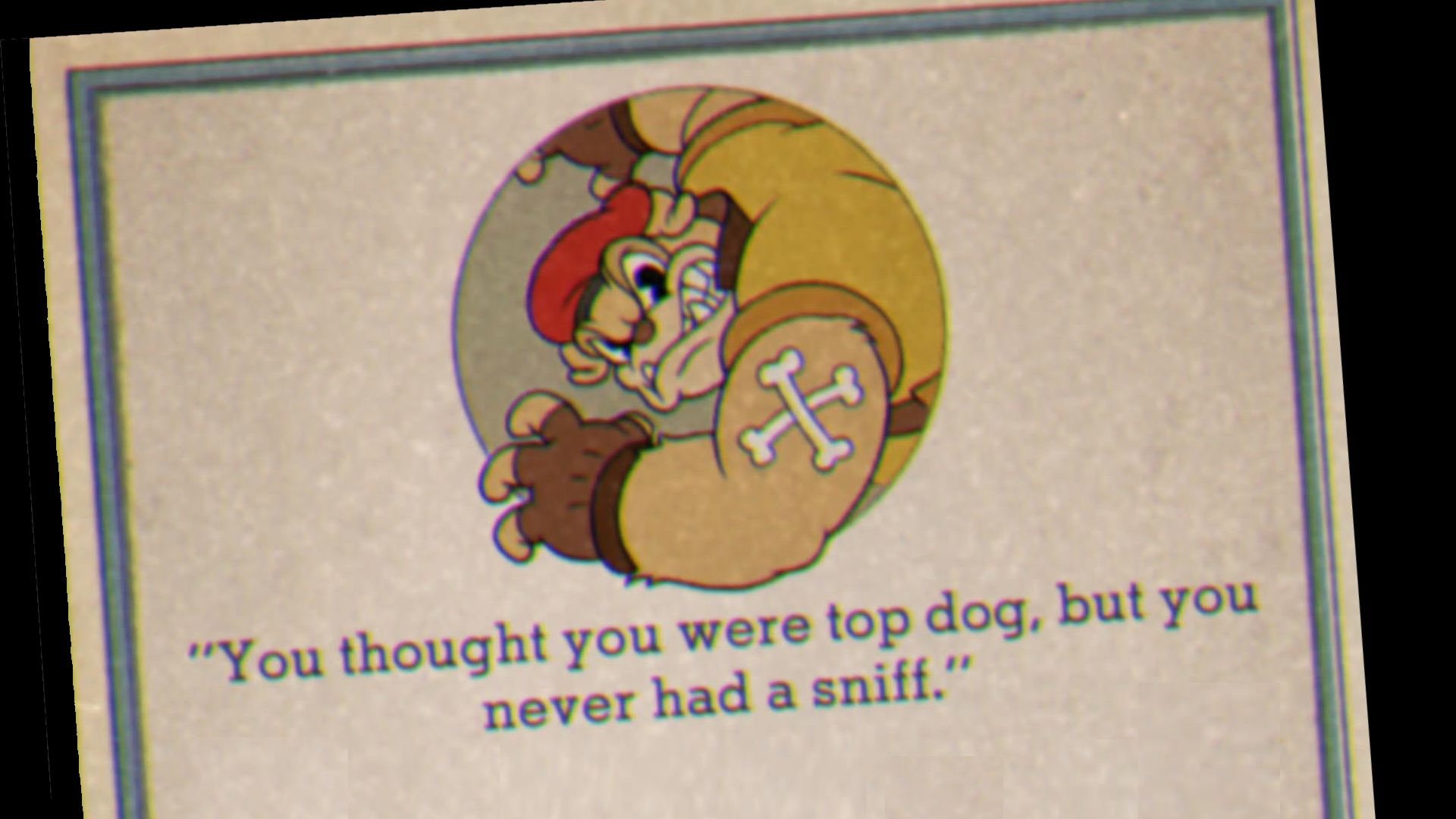 Your first opponent will be the Howling Ace's Bulldog pilot. Due to his tattoo, we're just going to call him Crossbones. Good ol' Crossbones will jump out of his plane, and off-screen, every time he is going to attack. One thing to note is that you are in control of your plane. Stepping onto the left wing will make it travel left, stepping on the right will make it move to the right. Often, it is best to try to stay in the center. 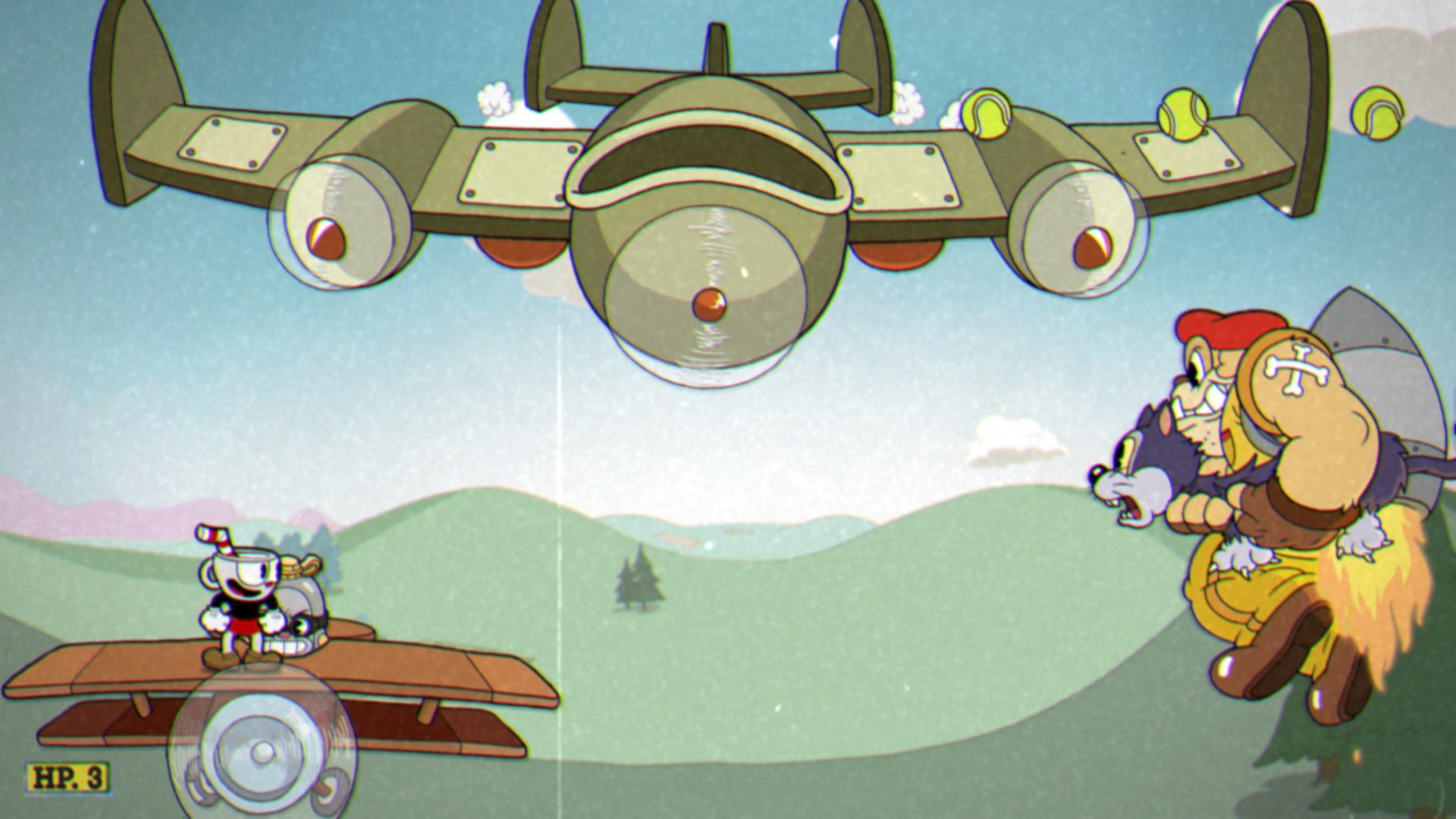 If he pops his head out from the side of the screen, you know he is going to fire three balls of yarn from a cat. These yarn-based projectiles are actually quite quick. We recommend that you dash over them, but in a pinch, you can duck them as well. You will be able to hit him with at least one fully charged shot during this attack. 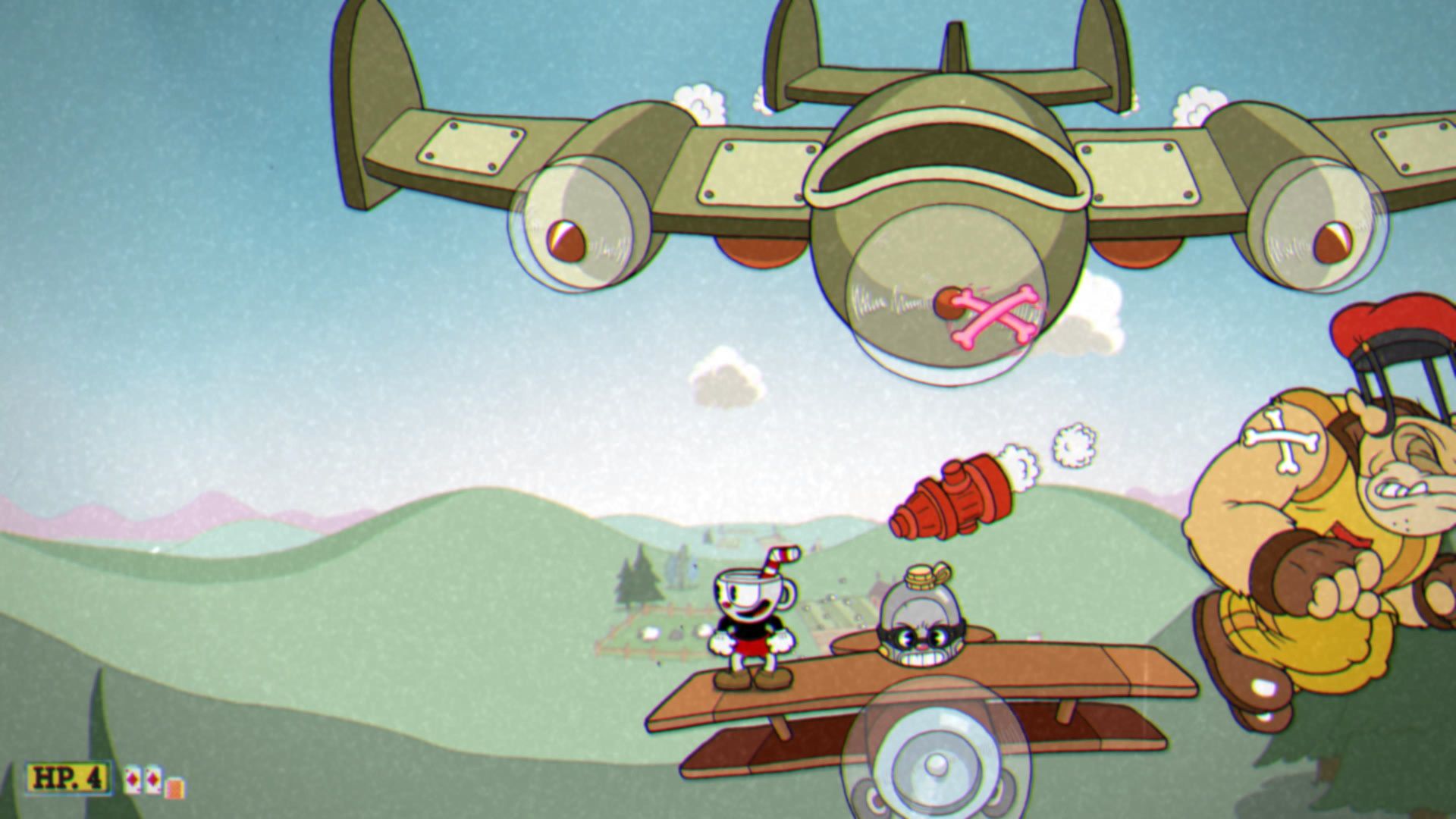 If Crossbones floats down from the sky, then he is going to fire boomerang projectiles from his tattoo. These always come in threes. At least one of them will always be pink. Sometimes, two of them will be. We strongly recommend parrying any pink boomerangs on the way back, as the boomerangs return from low to high (which means that your parry won't put you in the path of the next projectile). You should be able to hit him twice with a fully charged shot as he floats down. 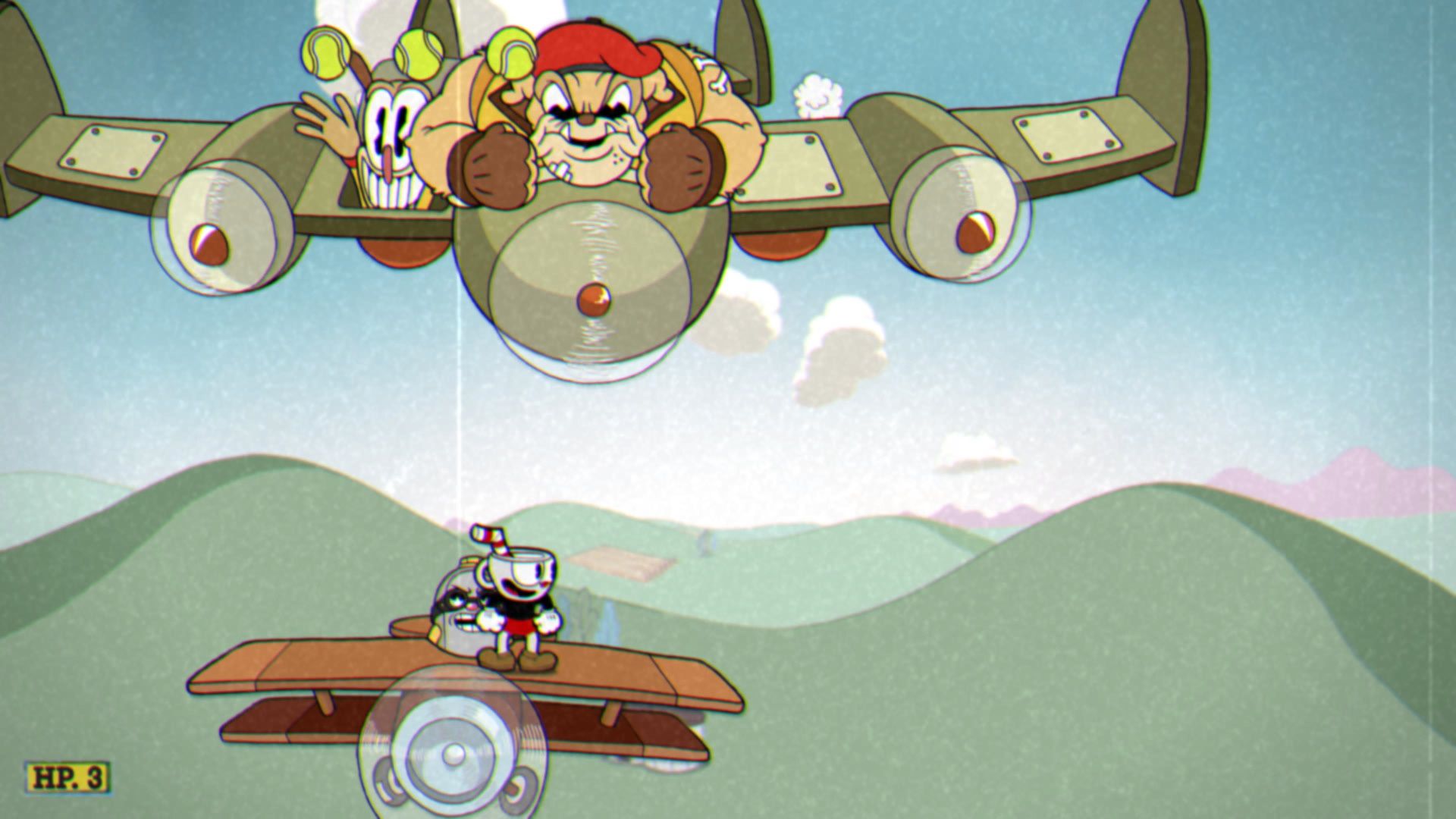 Throughout the battle, you won't just be contending with Crossbones, you will also have to deal with a barrage of tennis balls which are thrown by one of his crew members. There are four hatches, and the tennis balls can be thrown from one of the dogs in any one of those hatches. So look out. These aren't a real issue at the beginning of the battle, but they can absolutely be a problem if you are stuck crouching under some yarn balls, or trying to dodge a boomerang. 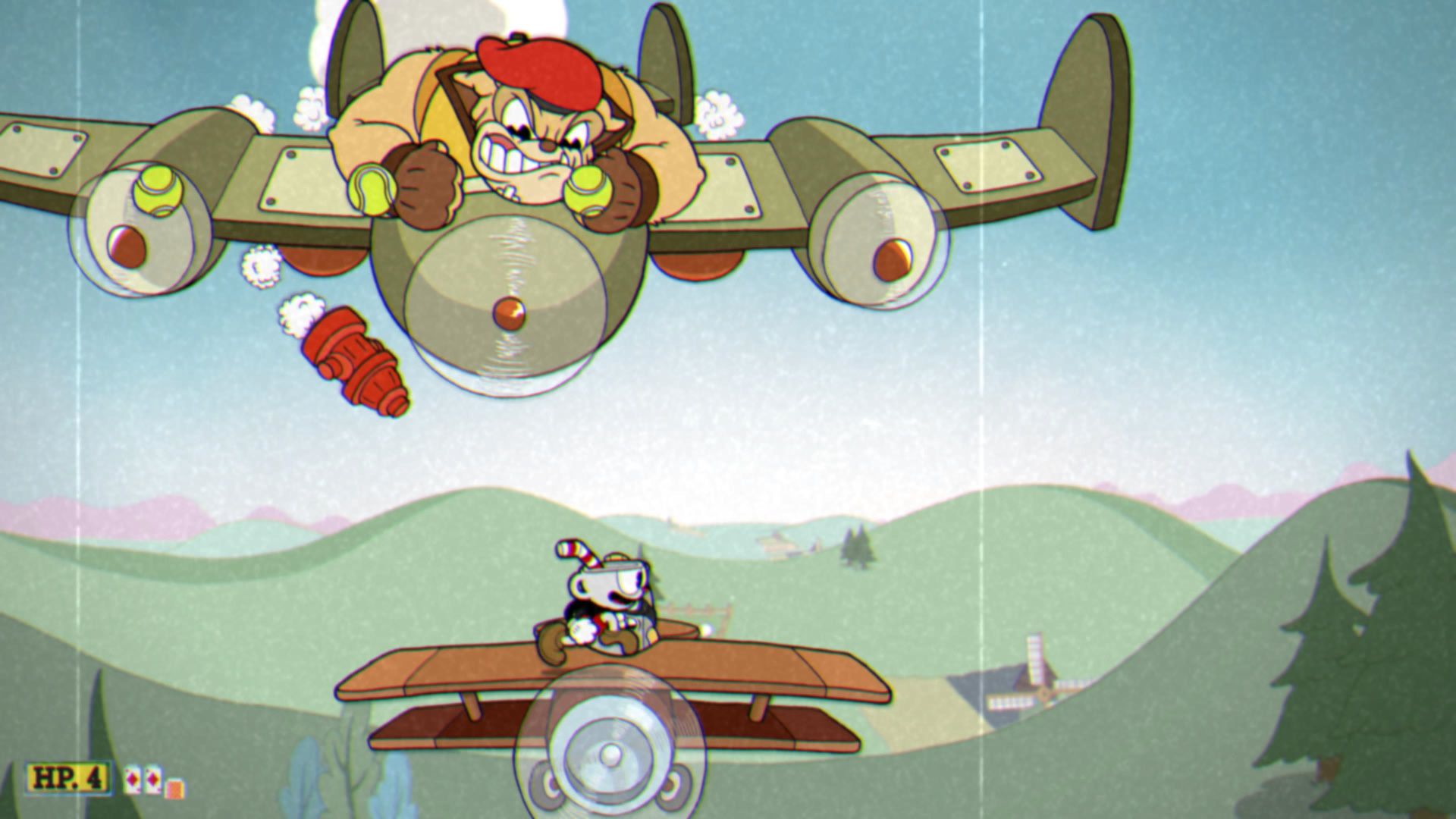 Once Crossbones is wounded, a number of heat-seeking fire hydrants will start entering the screen. These are slow-moving, but they will never quit. So, make sure to take them out before they become too much of an issue. Thankfully, they aren't particularly durable.

Phase 2 – How To Beat The Rocket Pack Pups 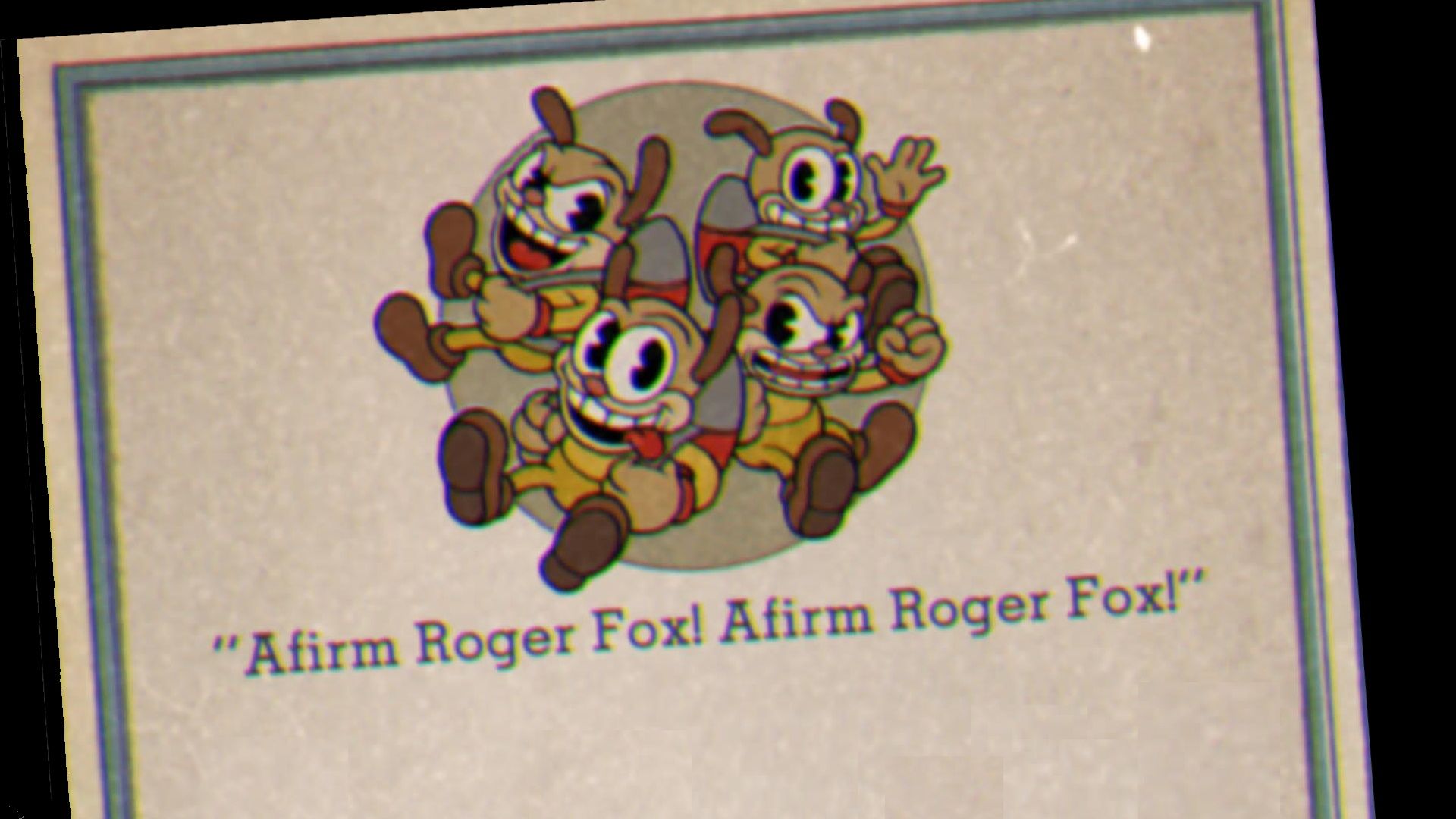 Once you take care of Crossbones, you will then have to deal with the support crew (the ones who were tossing those tennis balls at you). The four puppers will circle you counterclockwise. As they do so, they will bark letters at you. Your best bet is to simply position your plane in the center of the screen, switch to the Chaser weapon, and focus on dodging the letters while the Chaser does the rest of the work. This should take care of these doggone dogs.

Phase 3 – How To Beat The Captain Of The Howling Aces 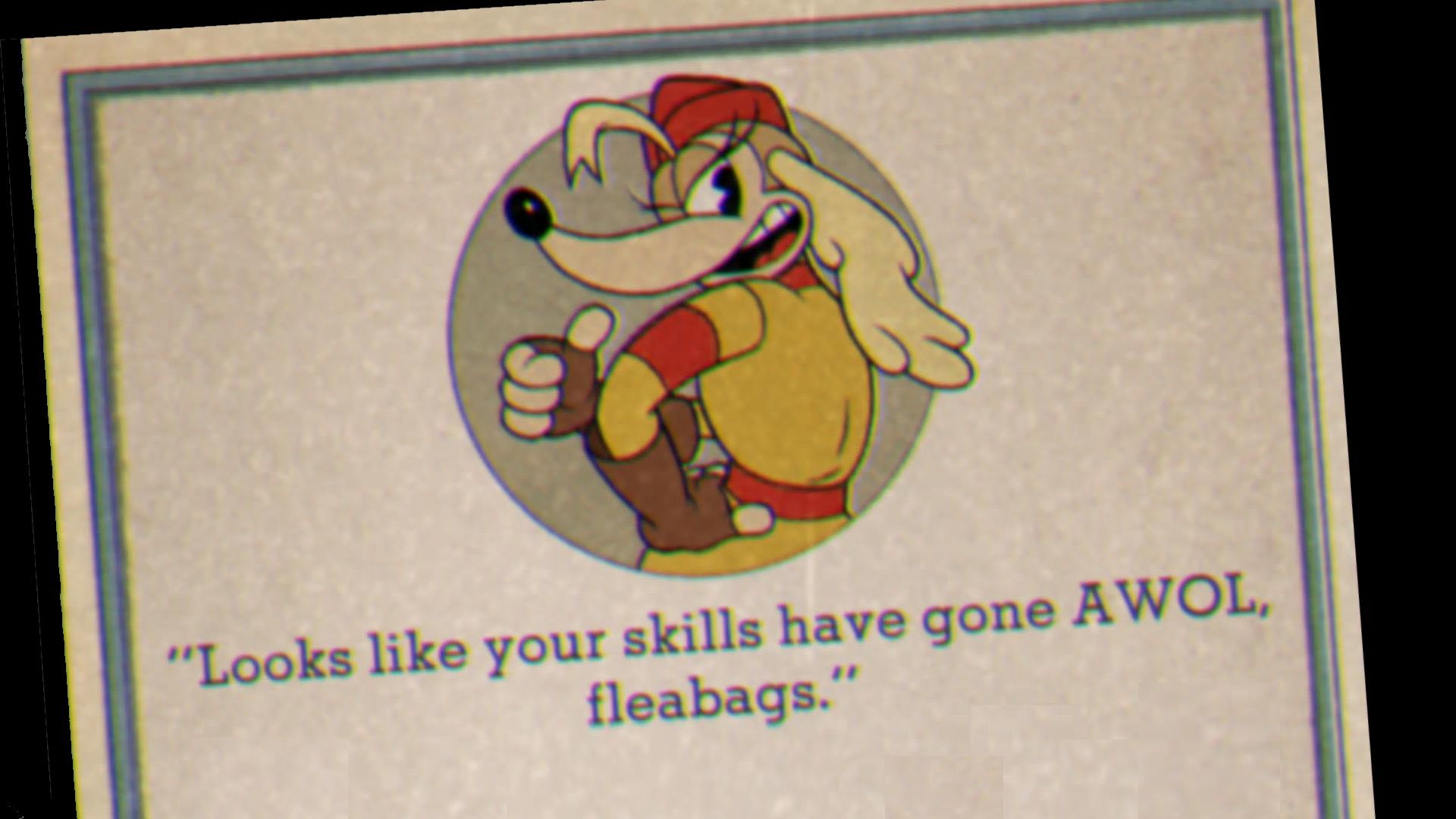 At the beginning of this phase, lasers will come out of the side of the ship to shoot you. The path of the laser will be traced before it fires, so just make sure to be somewhere else. Ideally, you will get a few shots off on the laser canons. The third laser will always come from the side and produce a pink laser. This is parriable! 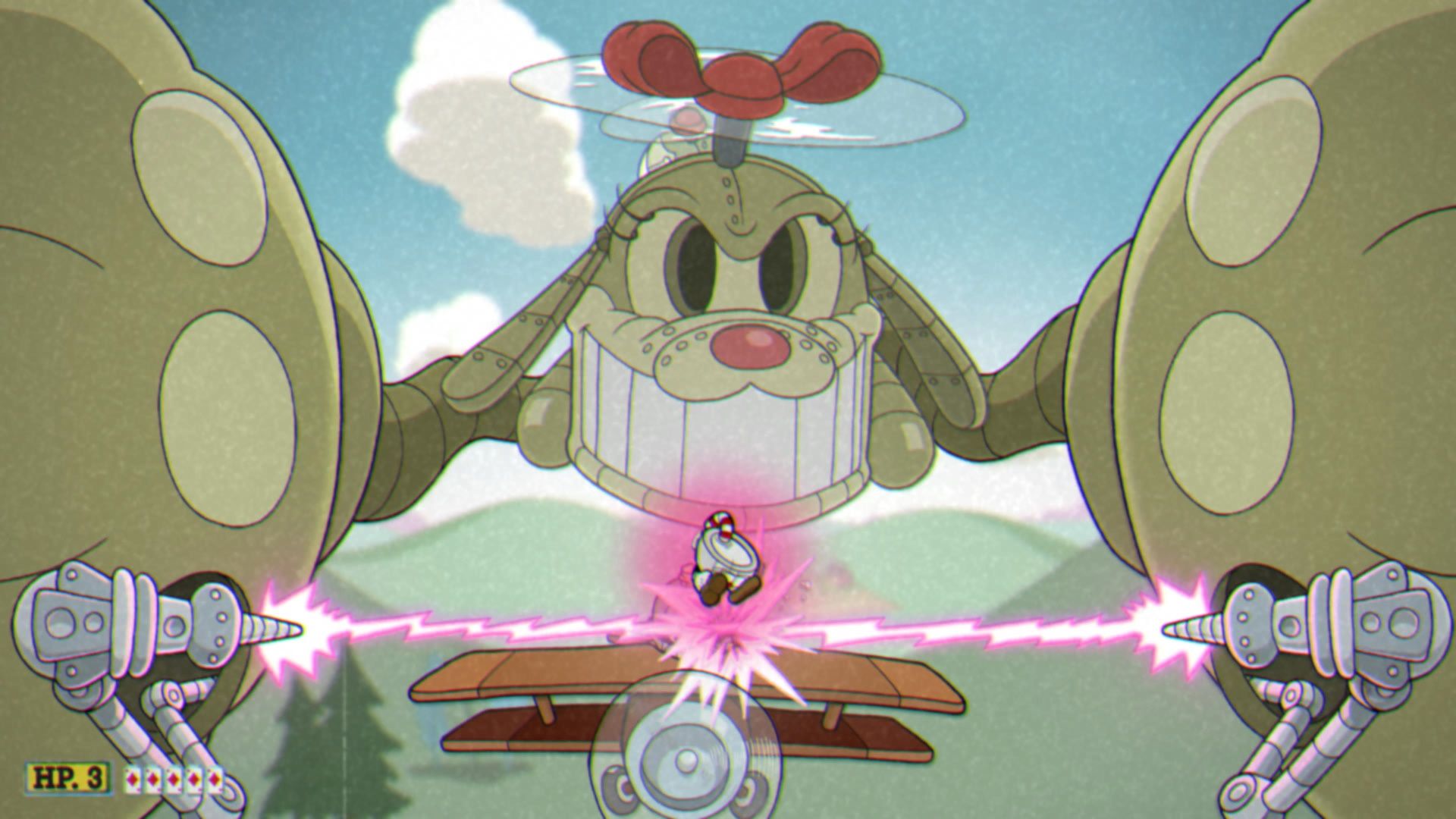 Now, the Captain of the Howling Aces is going to flip your perspective. When she does so, your control scheme will flip with it. Steel yourself for this. The first time around, your perspective will shift ninety degrees. This will not affect your control scheme. Switch to your Chaser weapon and prepare to dodge some dog dishes. If the dish is red, you need to jump over it; if the dish is yellow, it will travel over your head. 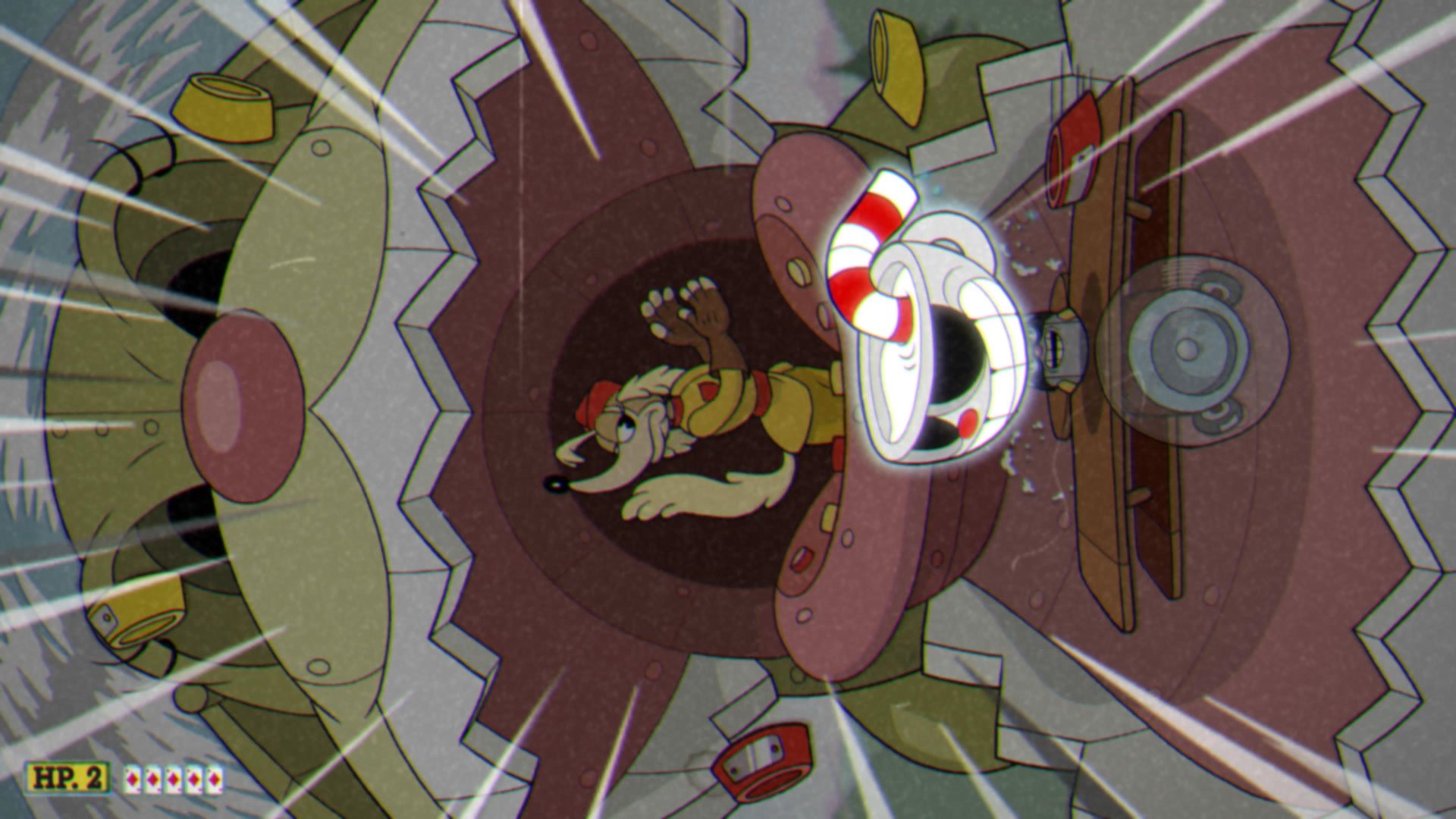 Next, the screen will shift another ninety degrees. You will officially need to press up to duck now. This is confusing, but you almost have her at this point. The dog dishes operate in the same way. If you wind up getting yourself into a pinch, you can use your invincibility super to make it through. The screen will keep tilting ninety degrees until you finally beat her. Just keep shooting and you will find victory!

How To Unlock The Alternative Phase 3 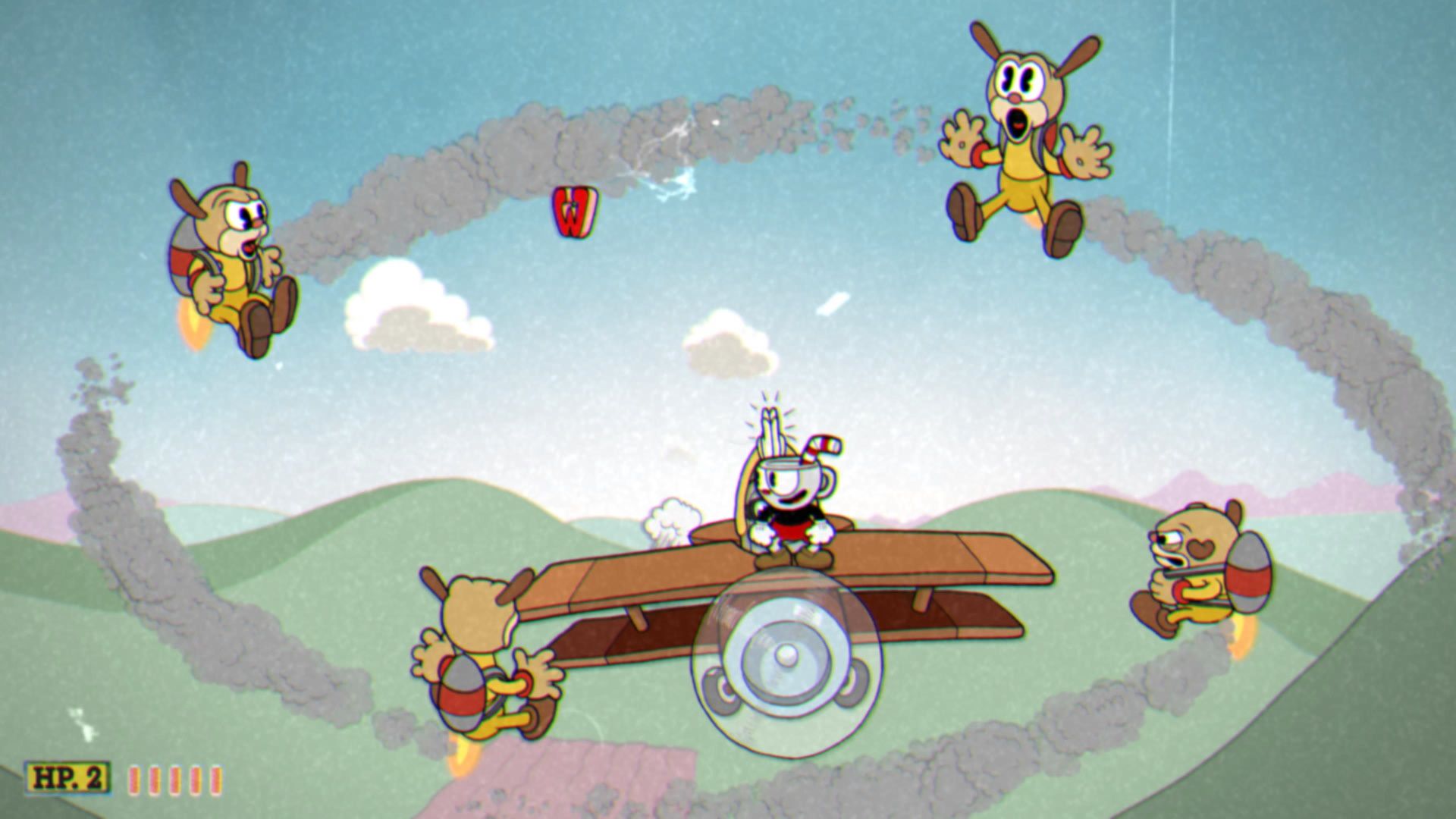 If you just can't stand to deal with your controls being flipped around, this is your alternative. In order to access this secret phase, you will want to shoot the dogs in the second phase of this battle, until black smoke starts coming out of all four of their rocket packs. Once you do this, you will transition into the secret final phase of this fight.

This means you won't be able to use the Chaser against them, as you won't be able to choose who you fire upon. Instead, shoot each dog with a fully charged charge shot. Then, follow up with a single uncharged shot. The best way to do this is to focus on them one at a time, so that you don't lose track of which dogs you have hit with a fully charged shot.

Here you will deal with two attacks: a pineapple, and one of those heat-seeking fire hydrants from the first phase. While this sounds easy enough, here is where it gets tricky. The pineapple is more dangerous when it is shot, so you are going to want to do everything in your power to not shoot these. Obviously, this means that weapons like the Chaser are quite simply out of the question. Shoot the crew members to minimize the amount of pineapples on the screen. 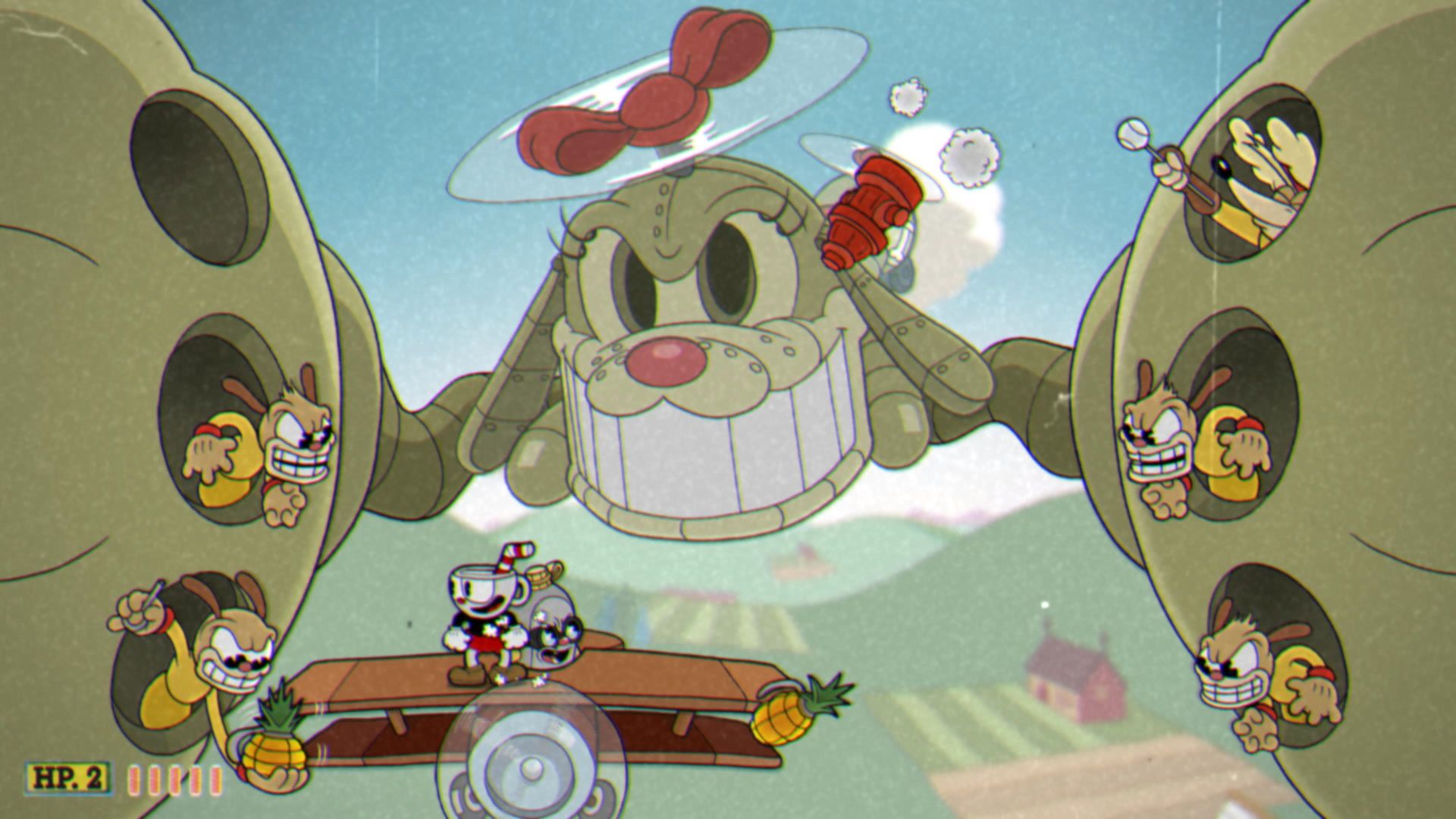 You are going to need a weapon that is accurate so that you can shoot the fire hydrants, but not the pineapples. Also, and this is important, when you aren't shooting fire hydrants, you need to be hitting the Captain, as she is your primary target here. Dealing damage to the rest of her crew is only good for making them retreat temporarily. Your best bet for dealing with this phase is to use the Charge shot or the Converge. Both of these weapons can hit at a distance and are easily aimed. Twist Up isn't a bad choice either, as it will attack the entire side, but it isn't as good at hitting the fire hydrant out of the air. 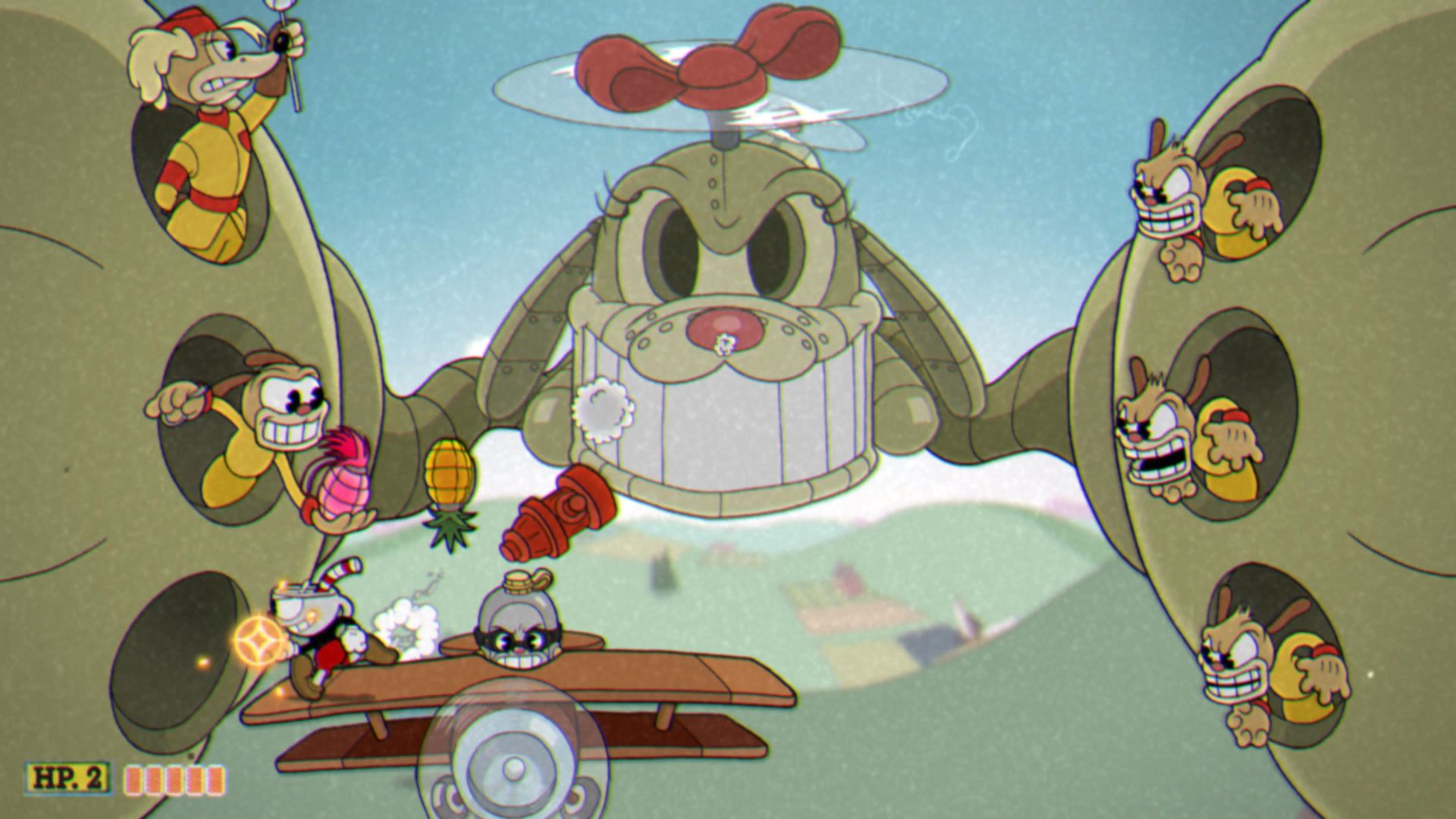 It seems like the Captain of the Howling Aces has more hit points here, as this battle takes quite a bit longer. Just hit her with your beam super when she is in range of it, and build your super meter back up by parrying pink pineapples, and you will eventually take her out. This method avoids the controller wonkiness, but is much more of a battle of attrition. 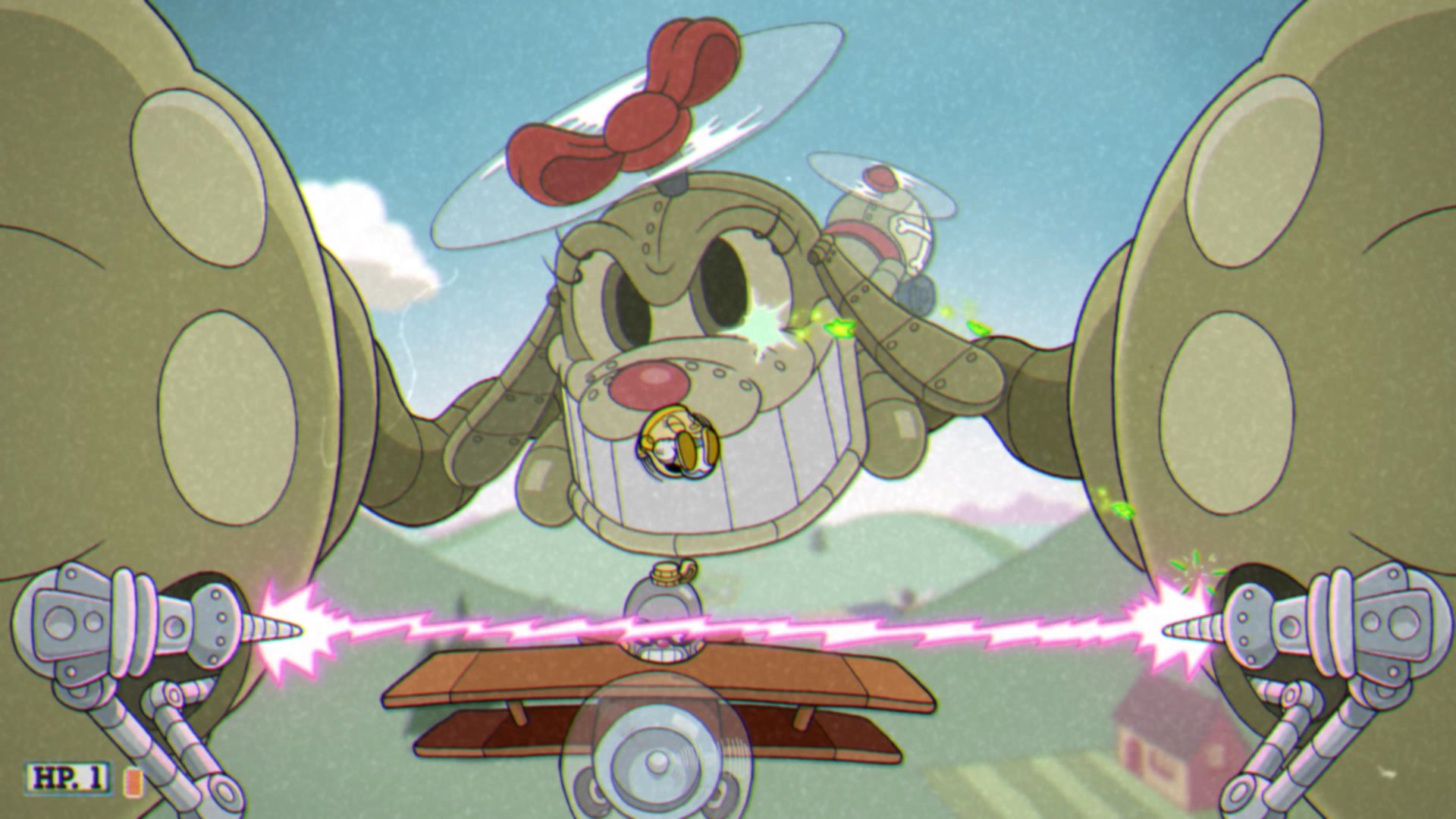 Ms. Chalice is able to fight The Howling Aces quite proficiently. Her jump arch is extremely effective at clearing obstacles, and she can use her double jump to bail herself out of trouble midair. Her air mobility is especially good when fighting the Captain, as she is able to easily keep above the dog dishes. 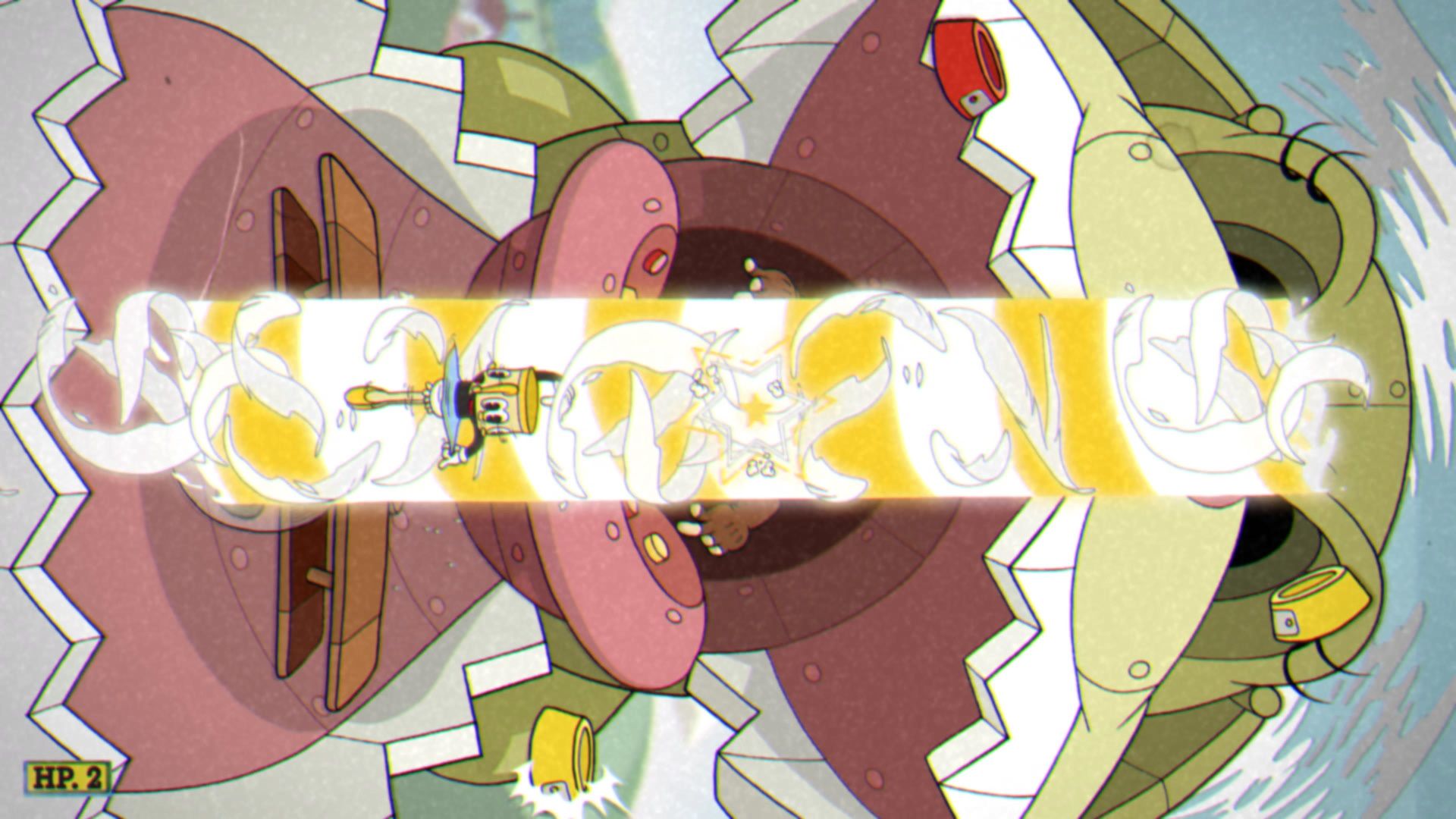 Her version of the beam super is even a vertical pillar. Which makes it ideal for fighting the captain (who appears directly above you). The only disadvantages she has is that she can't equip the Heart Ring (because her Cookie takes up the charm slot), and she isn't able to parry the pink laser in the final phase (though he can just double jump over it and wait it out in the air). All-in-all, we would say she makes this fight a lot easier.