Oceiros, the Consumed King, is a side boss in Dark Souls 3. Oceiros guards the shrine located in the garden situated beneath Lothric Castle. He holds Ocelotte, who appears to be an invisible child, in his hands and has a staff that he uses to attack you. He was once the King of Lothric and was obsessed with experiments relating to the royal blood.

Oceiros himself looks blind, as his eyes sockets look empty. Defeating him is not mandatory, but is required for a few endings. Here is all you need to know about Oceiros, the Consumed King. 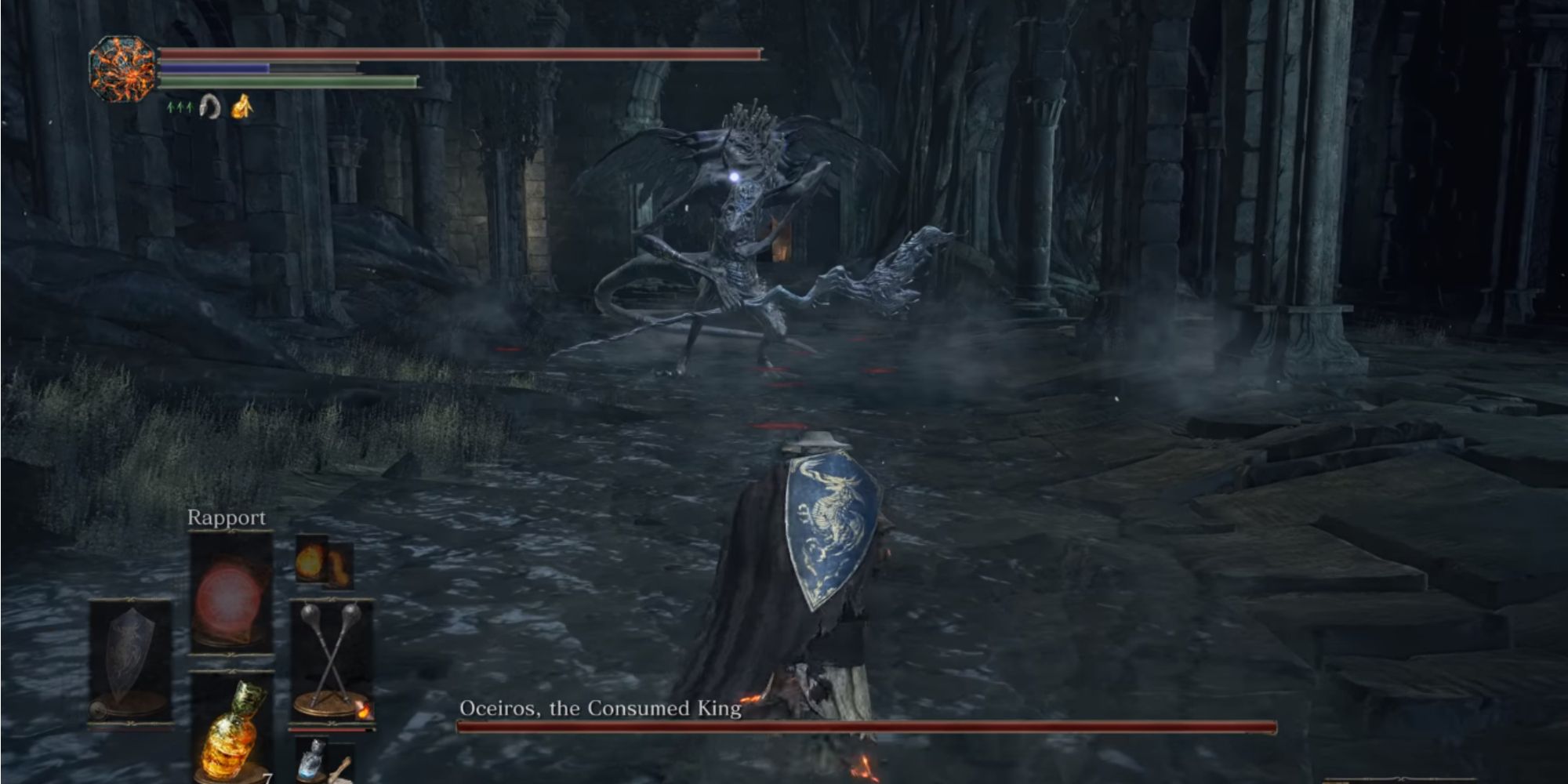 Oceiros, the Consumed King, is located in Consumed King's Garden. The boss is optional if you are aiming for the "Link the Fire" ending. However, for "The End of Fire" ending, you will heave to defeat this boss.

For this fight, you can summon Hawkwood, the Deserter. His summon sign is outside the boss arena near the two Knights. Defeating the boss will get you 58,000 Souls and Soul of Consumed Oceiros. You can transpose the Soul for a spell or a weapon at Firelink Shrine. Acquiring Soul Transposition does require you to beat Curse-Rotted Greatwood. 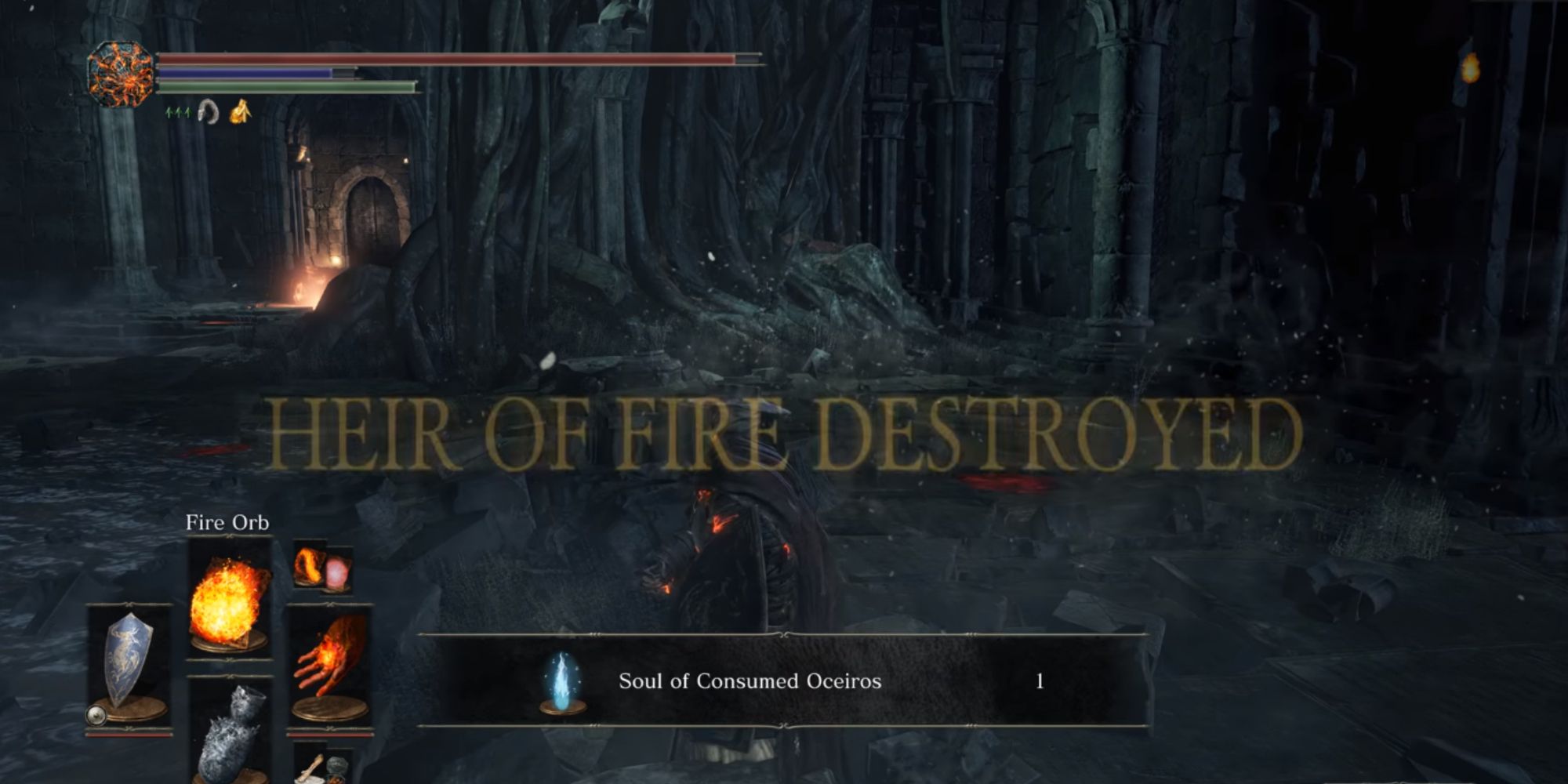 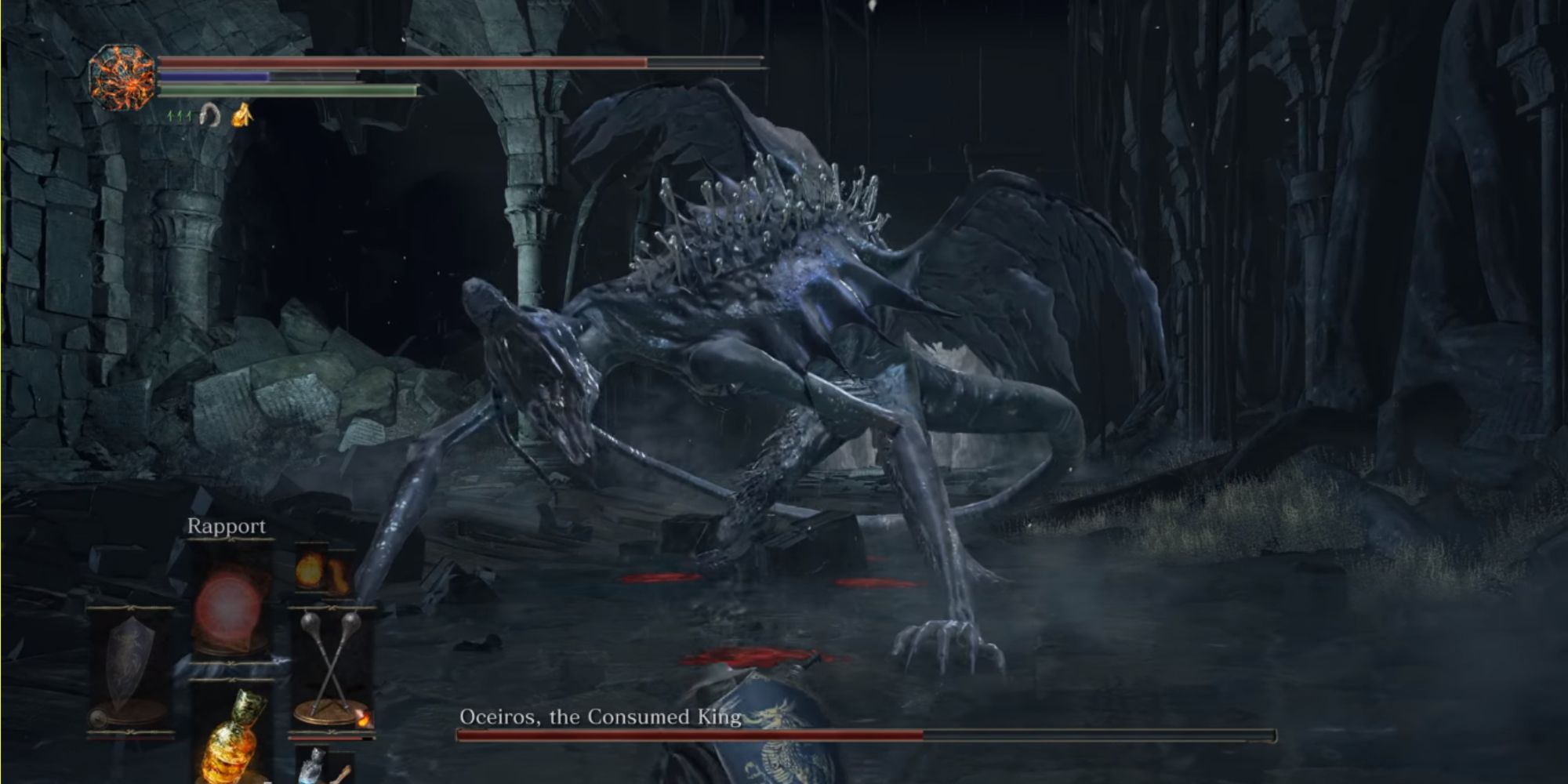 Oceiros, the Consumed King, has two phases. In the first phase, the boss uses his staff while holding Ocelotte. During the second phase, the boss goes down on all four limbs and charges at you like a beast.

The boss uses his staff to do a vertical bash.

Oceiros leaps back and performs a vertical bash.

The boss sweeps his tail, trying to knock you down.

Oceiros leaps back and freezes the area below him.

The Consumed King raises his staff and jabs it at the ground. This causes a large AoE mist to start generating around him.

The boss starts to use his hand to swipe at you multiple times.

Oceiros charges at you like a beast, which deals severe damage.

The boss flies and starts to blast crystal magic on the ground.

Oceiros lets outs a crystal breath in front of him, which causes your Curse bar to go up. The boss can follow this with a spin attack. 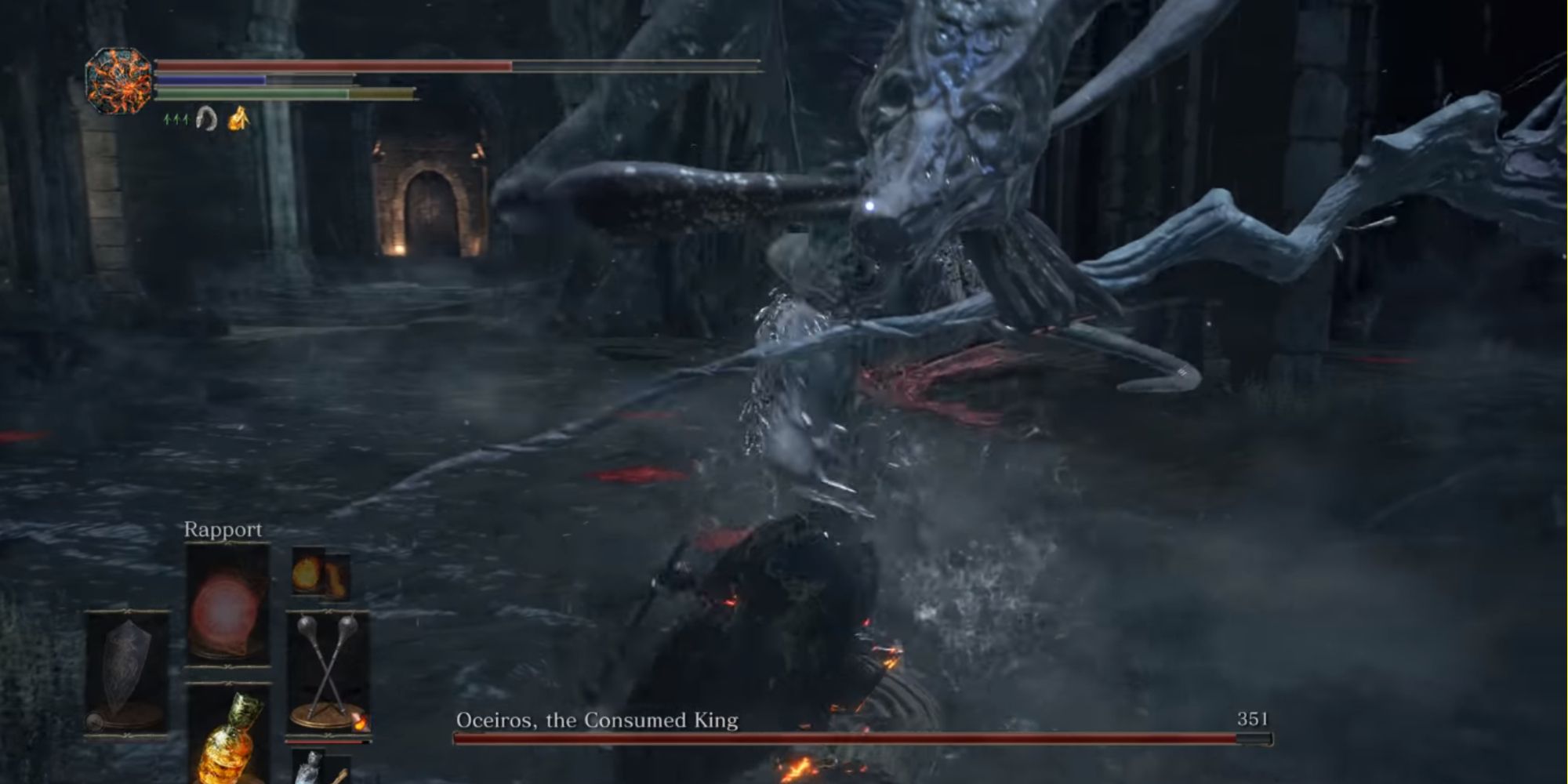 Despite the boss looking terrifying, especially in the second form, the boss fight is quite easy if you get down to the essentials. In the first phase of the fight, the boss does not have many variations in his attacks. Most of the time, he will be talking to his invisible child, making the fight more interesting as you try to listen to him.

The best way to attack him as a melee class is by staying under him and attacking his crotch. This will ensure that you dodge his attacks and get decent damage in. However, his Leaping Bash is an attack the boss uses if you stay under him a lot. He jumps back and bonks you. Be wary of his poking the ground with his staff animation, as this causes a large AoE.

You will hear a baby's scream that will trigger the second phase. The boss will go down on his four limbs, and his attacks will change. Oceiros becomes more aggressive and does not talk anymore. Blocking his attacks in the second phase is not recommended, as he can break your shield and stagger you because of the combo slashes. The boss also starts to fly and breathe crystal breath in the area below. This is easy to avoid but will not give you much of a chance to attack as he flies far away.

Try to dodge his charge by rolling sideways. This attack does serious damage, so it would be best to dodge this every time.

For Pyromancers, the first phase of the fight is quite easy. However, the real challenge begins in the second phase when the boss moves around a lot. You will need to stay at mid-range all the time, so that you can lob constant Fireballs at the boss when his attacks end.

If you are playing as a Sorcerer, the whole fight will be extremely difficult. Including the fact that you are also ranged like the Pyromancer class, you will have to keep at a distance at all times. On top of that, the boss has high magic resistance compared to other stats. This makes the boss tankier towards your spells.

Throughout the fight, long cast spells, regardless of their damage, are not useful — especially in the second phase, where the boss can blindly charge at you while you are casting. The only time a long cast spell might be useful is when the boss is transitioning into his second phase.

The boss is quite weak against Frost, so if you have the Ashes of Ariandel DLC, and have already acquired the Snap Freeze spell, you can Frostbite the boss for quite some damage.

Genshin Impact Is Twitter’s Most Discussed Game Of 2021, Surprising No One

Ban PewDiePie petition: Should YouTube’s biggest star be banned from the site?