The Gunner dwarf class in Deep Rock Galactic is for gamers who prefer shootin' over lootin'. He is the character that hits the hardest, carrying a mini machine gun everywhere he goes. This is the tank of the three dwarves. Instead of using smart calculations and skills, you just hold the trigger toward whatever is bothering you and your team.

While the Gunner is quite simple on the outside, there are various weapons and tools he can use to his advantage to help the team mine and win. All weapons and support tools in the game are useful and hit hard, but only some of them are going to make assignments a breeze when collaborating with others. 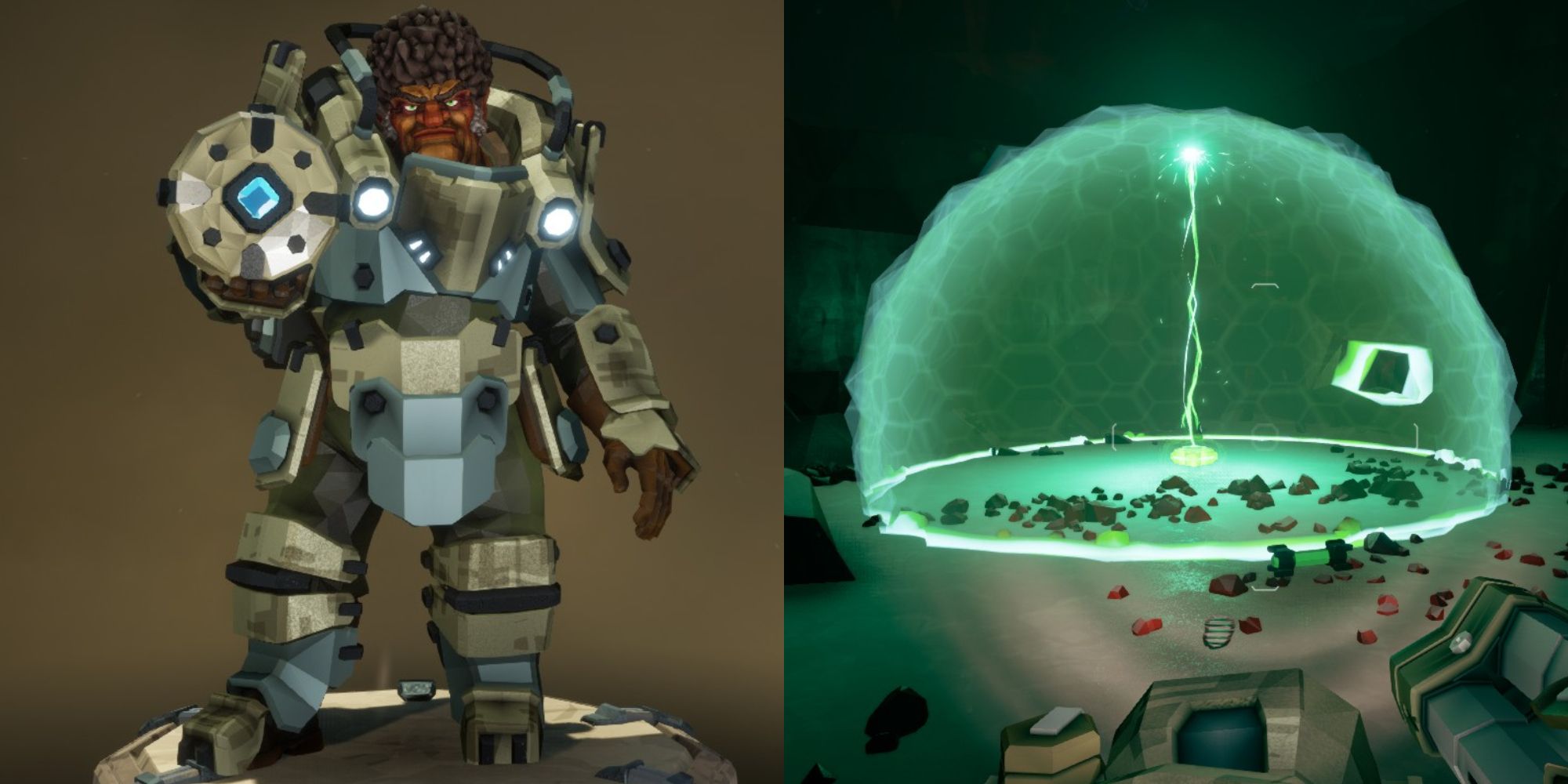 Support tools in Deep Rock Galactic are useful contraptions for the whole team. The Gunner's support tools consist of the Zipline Launcher and the Shield Generator. From day one, Scout's Grappling Hook has worked far better than Gunner's zipline. Though Scout's version of cave travel is solo-use and not for use of the team, it is more practical and quick. Setting up ziplines as Gunner requires methodical thinking, as specific terrains are randomly generated, and not every wall or cliff can support a zipline. While using the zipline, travel is very slow. The Zipline Launcher is only useful when the objective is in one single area, like repairing Liquid Morkite Pipes, instead of when the objective is to traverse through the entire cave and collect items.

The Shield Generator is useful in every situation for the entire team. The Gunner is the tank of the group, but with this generator, he can support Scouts and Engineers who may not be as strong as him. The Shield Generator activates a protective globe when thrown. When standing inside, you and your team's shield bar above your health bar will regenerate quickly. That's not all. The regenerative globe blocks a lot of attacks and attempts to repel enemies. This is perfect for saving downed players in a tough fight or just for general team support or life-saving moments.

Benefits of The Shield Generator

The Best Gunner Weapons To Use 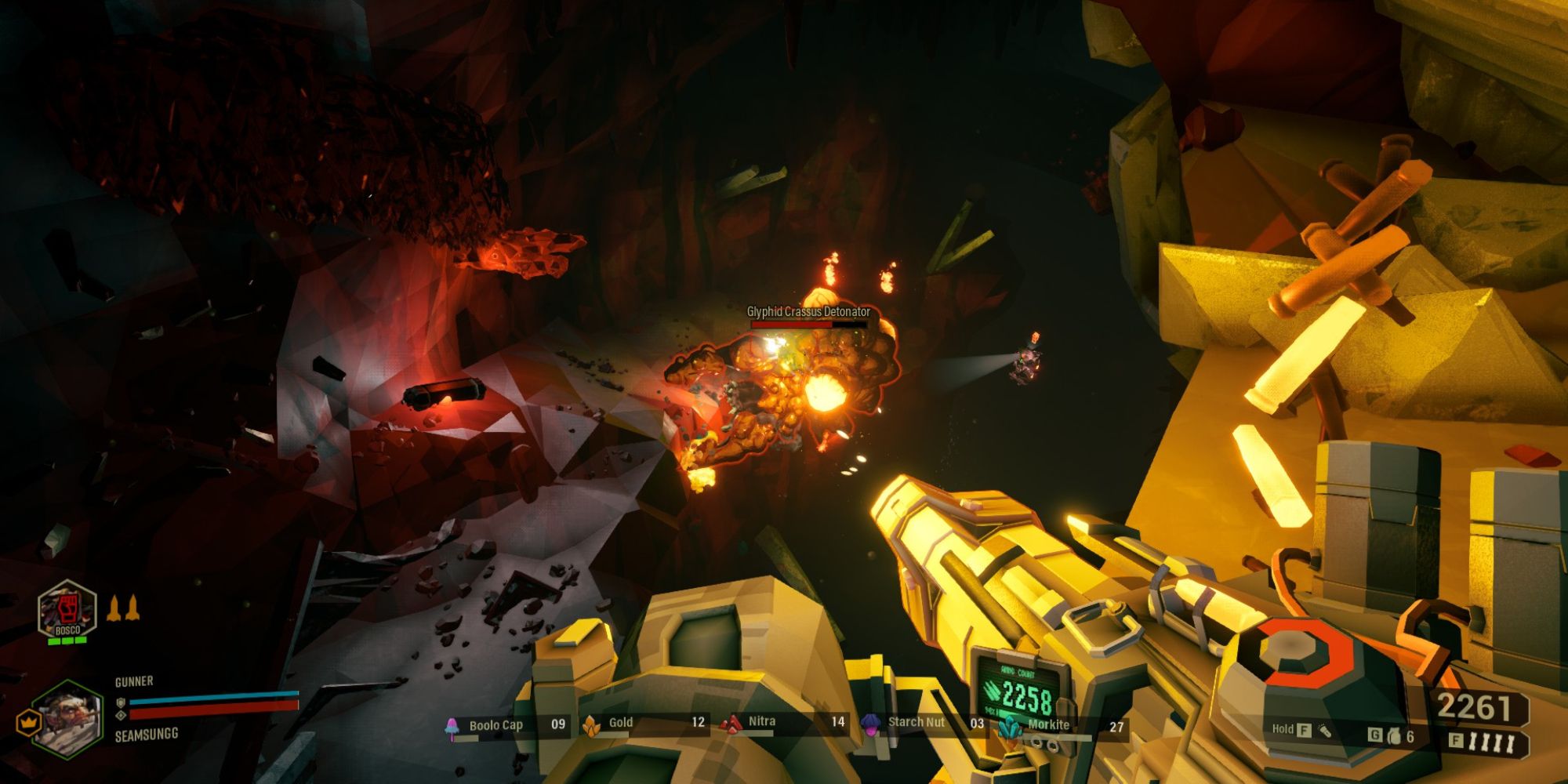 The Gunner's default loadout includes the Lead Storm Powered Minigun, Bulldog Heavy Revolver, and Sticky Grenade. By leveling up your Gunner dwarf using the Assignments terminal in the Space Rig, you can unlock various new weapons to play with. Ghost Ship Games has introduced a free-of-charge Battle Pass that adds new weapons each season. These new seasonal weapons can also be unlocked through the Assignments terminal and will give your Gunner's arsenal some variety.

By completing the weapons Assignments, you can earn two more heavy primary weapons, the Thunderhead Heavy Autocannon and the Hurricane Guided Rocket System. You may also unlock and purchase another secondary weapon, the BRT7 Burst Fire Gun, and two more grenades, an incendiary and a cluster grenade.

The best primary and secondary weapons to use as the Gunner are the Thunderhead Heavy Autocannon and the BRT7 Burst Fire Gun. The default minigun fires fast, the speed is unmatched, but the autocannon in question hits way harder. The loss of rate of fire is not that large in comparison. With a heavy-hitting single-shot main weapon, you'll want something speedy as your secondary weapon. That's the difference between secondaries Bulldog Heavy Revolver and BRT7 Burst Fire Gun. The revolver hits heavier, but the burst fire gun is quickest. At the end of the day, when going against bosses and strong foes, you'll want your primary weapon to hit the hardest. Smaller, common enemies in Deep Rock Galactic always come in large groups which makes your secondary weapon has a high rate of fire an advantage.

All grenades are epic and useful in a fight. They explode, for crying out loud. The Sticky Grenade is less useful, though, because it requires aiming at a good placement and hoping it goes off in time for the horde. Incendiary Grenades are always fun and can be used here, but the Cluster Grenade is clutch. The Sticky Grenade requires good placement and patience, the Incendiary Grenade has good AOE but will only go off if it touches the ground. Otherwise, it will bounce off of objects and not go off. The Cluster Grenade creates multiple small explosions upon landing and provides a stronger wow factor with a harder hit.

To unlock the Cluster Grenade, you must reach Gunner level 10.

The Best Perks To Use For Gunner 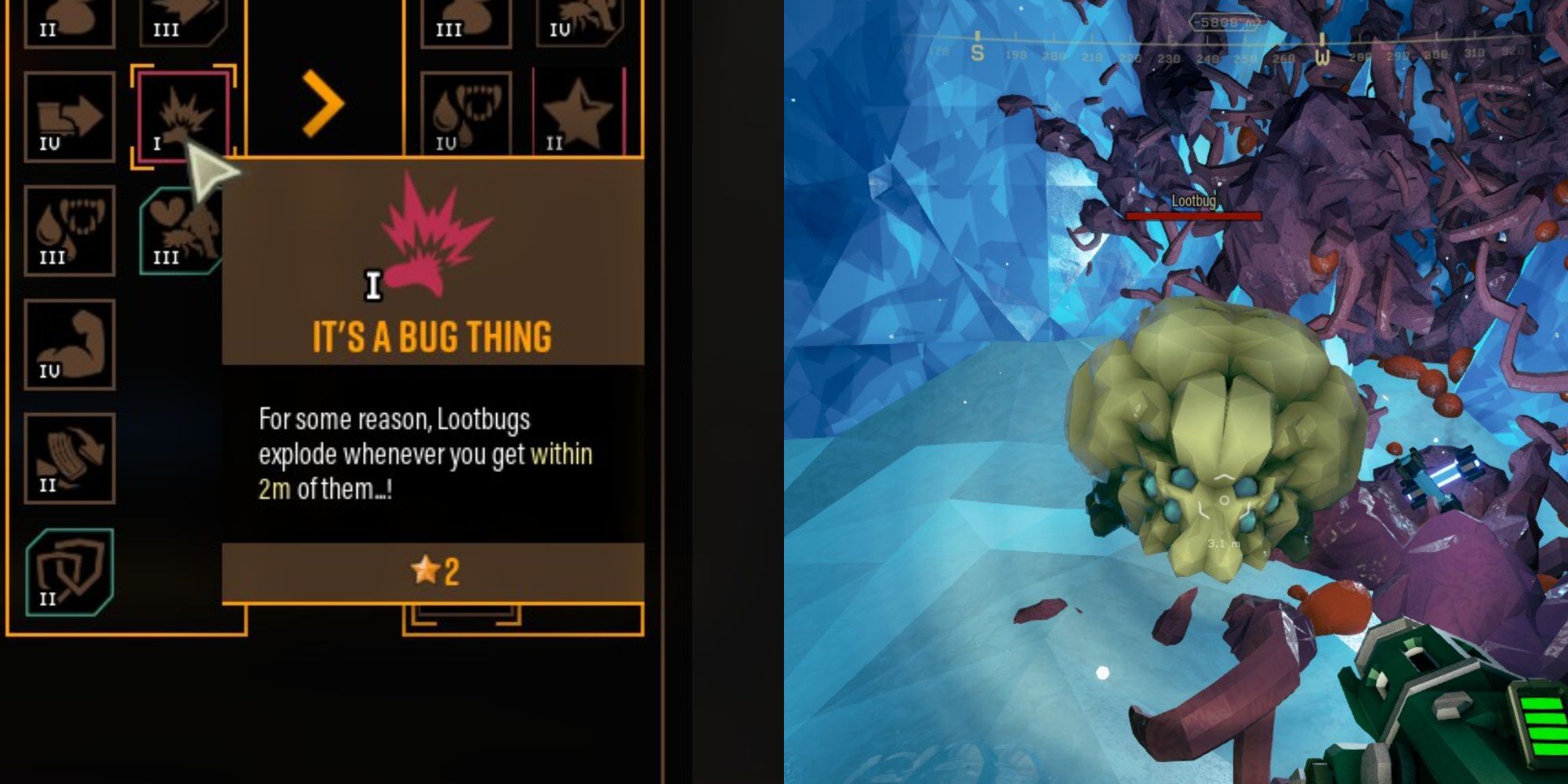 Perks are unlocked by accessing the computer in the bedroom pods you spawn inside in the Space Rig. Perk Points must be accumulated to buy new Perks and Perk Slots. These points are received by completing casual Milestones as you play the game. You can equip up to five Perks through enough leveling up. Perks are powerups and buffs that will help you and your team of hardy dwarves complete objectives with greater speed and strength. The recommended perks below for the Gunner class allow your dwarf to remain strong in battle and not have to worry about smaller concerns.

Friendly fire is a deadly thing in looting and shooting games. Especially if you're playing a fun-loving dwarf that has access to a minigun. Gunners are probably the first people to be guilty of friendly fire due to the amount of firepower and rate of fire they have. With this perk, you and any teammate you're with taking and receive 50% less damage from friendly fire. This way, you won't have to worry about downing teammates while going ham and defending objectives.

It's A Bug Thing

This perk makes it so that Loot Bugs automatically explode when near you. Loot Bugs drop a ton of useful Gold and Nitra when killed, but you have to take your attention and ammo away from the objective to seek them out. The Gunner is who you rely on to expend ammo on tough enemies, not Loot Bugs. With this perk, you'll be able to get that extra money and Nitra quickly without even realizing it. Gunner's having this perk equipped become even more valuable and dependable to the team.

Being the tank of the group, you must get resupplied exponentially well above all other characters. With the highest tier of the perk Resupplier, you can use the Resupply Pod 50% faster. The Resupply Pod will also replenish up to 25% more health than usual. After resupplying, your weapons will be automatically reloaded. This beefy perk will allow Gunners to get back to battle quickly, especially if there's a boss fight happening. 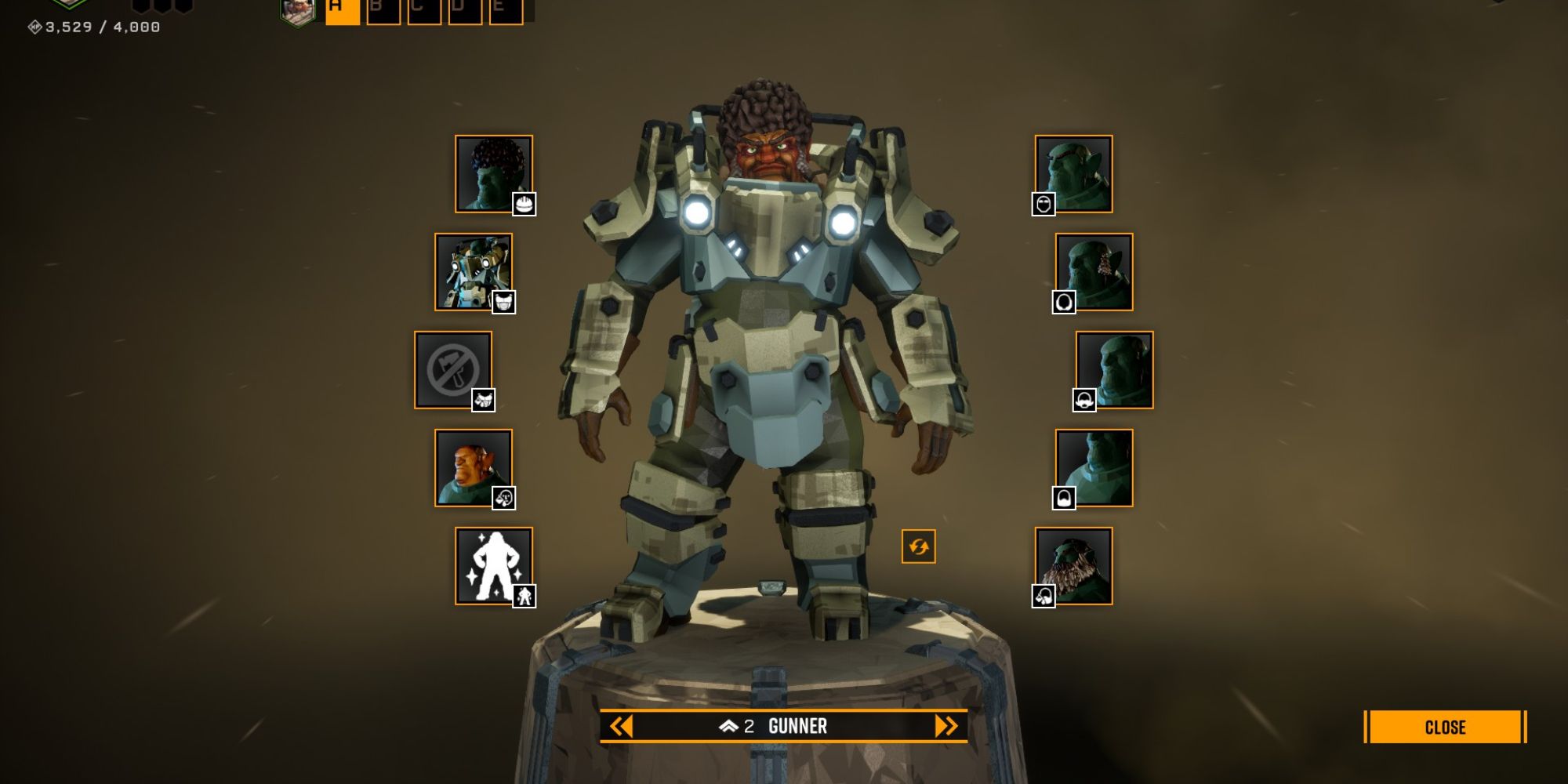 Scout and Engineer are mobile classes that access hard-to-reach areas and collect complex objective materials with ease. The Driller provides solutions to puzzling generated caves and hidden loot. The Gunner is the brawn of all four dwarves. His job is to take down difficult enemies and keep the heat off the objective and the rest of the team so that the collective can complete the mission together without risking too many lives.