Elden Ring has thoroughly impressed us with their vast panoply of bosses, but their array of dragon bosses are definitely ones to remember. Conceptually designed and executed beautifully, there's none more awe-inspiring than Ancient Dragon Lansseax. A dragon that can strike the fear of God into you, Lansseax takes a page out of Sekiro's Divine Dragon.

Ancient Dragon Lansseax is, undoubtedly, quite the challenge to overcome. In order to effectively defeat this draconic, four-winged behemoth, we are giving you an extensive outline on how to triumph over Lansseax. 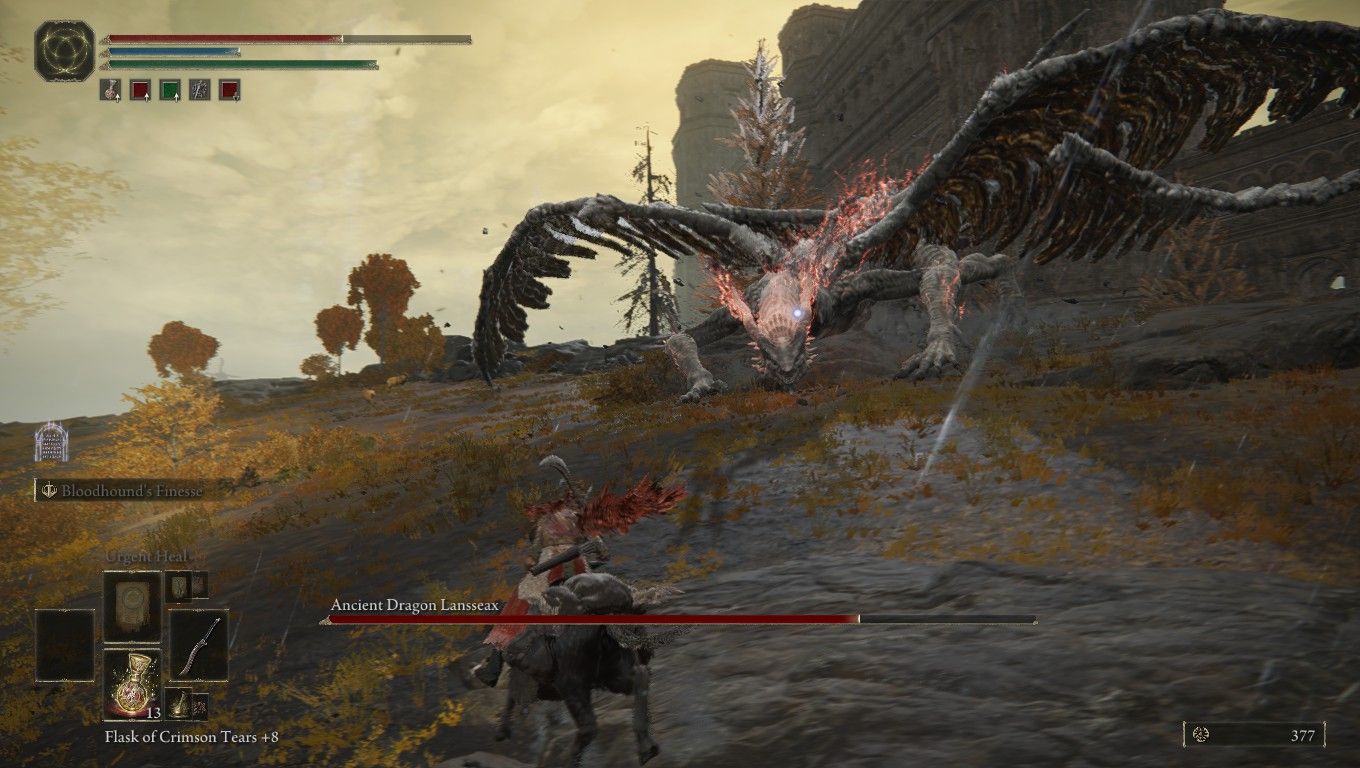 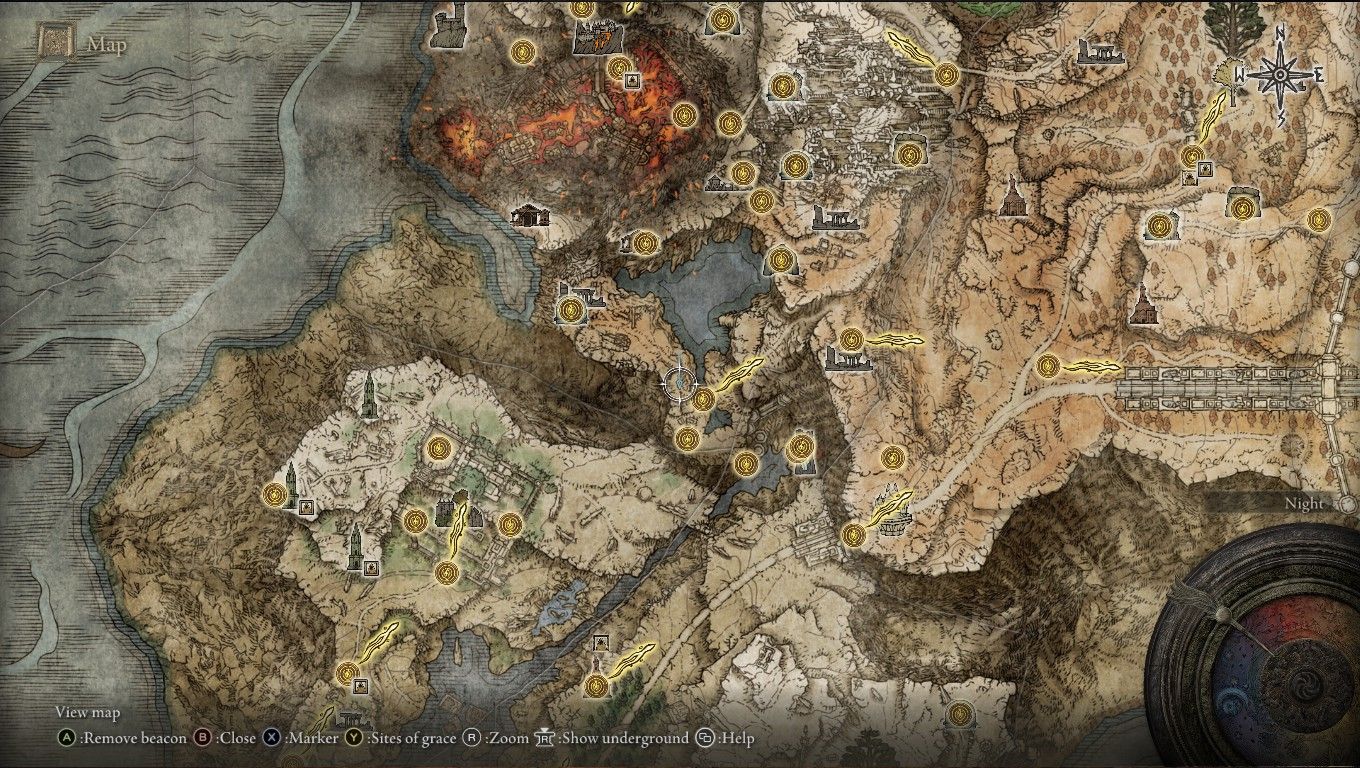 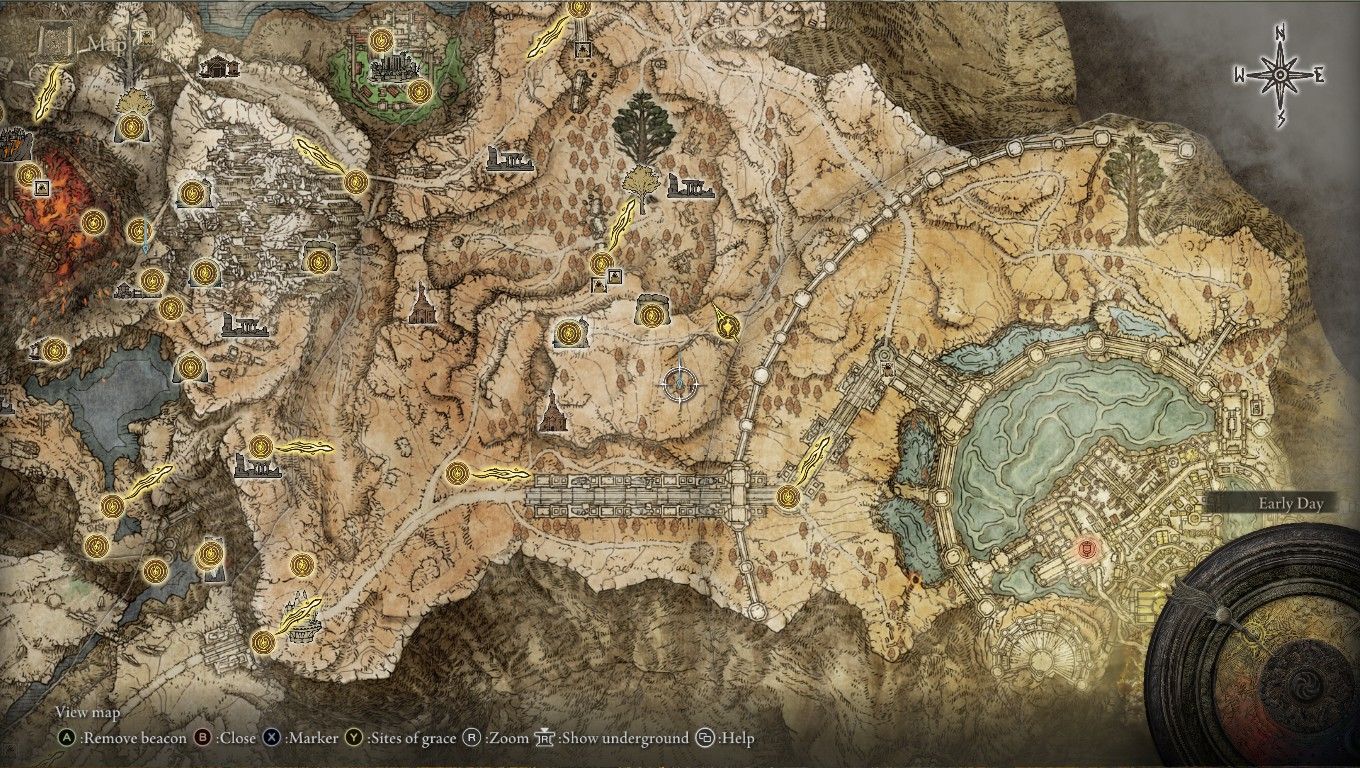 Like one other dragon boss in the game, Ancient Dragon Lansseax will first swoop in near Abandoned Coffin Site of Grace in Altus Plateau, before disappearing after you deal about 10 hits. You might have forgotten about Lansseax until you get closer to the walls of Leyndell, Royal Capital, above the Rampartside Path Site of Grace. Lansseax dives from the sky, but the dragon does not have a full health bar. Despite this, Lansseax's HP is still substantial.

For this fight, it is highly recommended to use Torrent. Lansseax has both massive AoE attacks and heavy-hitting melee attacks. You will need Torrent to make a quick escape from Lansseax's immense range. So make sure your weapon is scaled up to a +7 and equip some Rowa Fruit to keep Torrent alive for the duration of the fight. 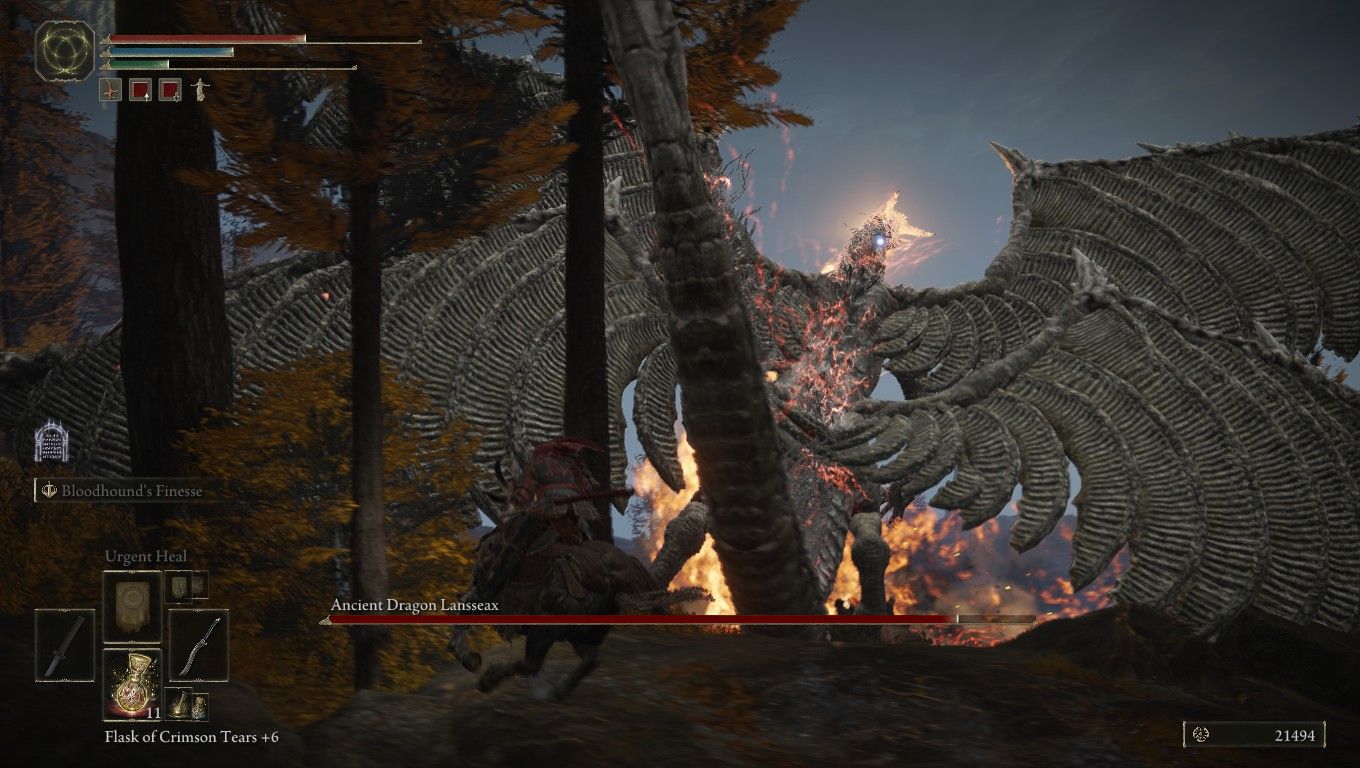 Ancient Dragon Lansseax's attacks are both distinct and deadly. Aside from the same attack mechanics found in other dragon bosses, Lansseax is defined by her fire breath and red lightning attacks. Without further ado, here is a full rundown of Lansseax's range of attacks. 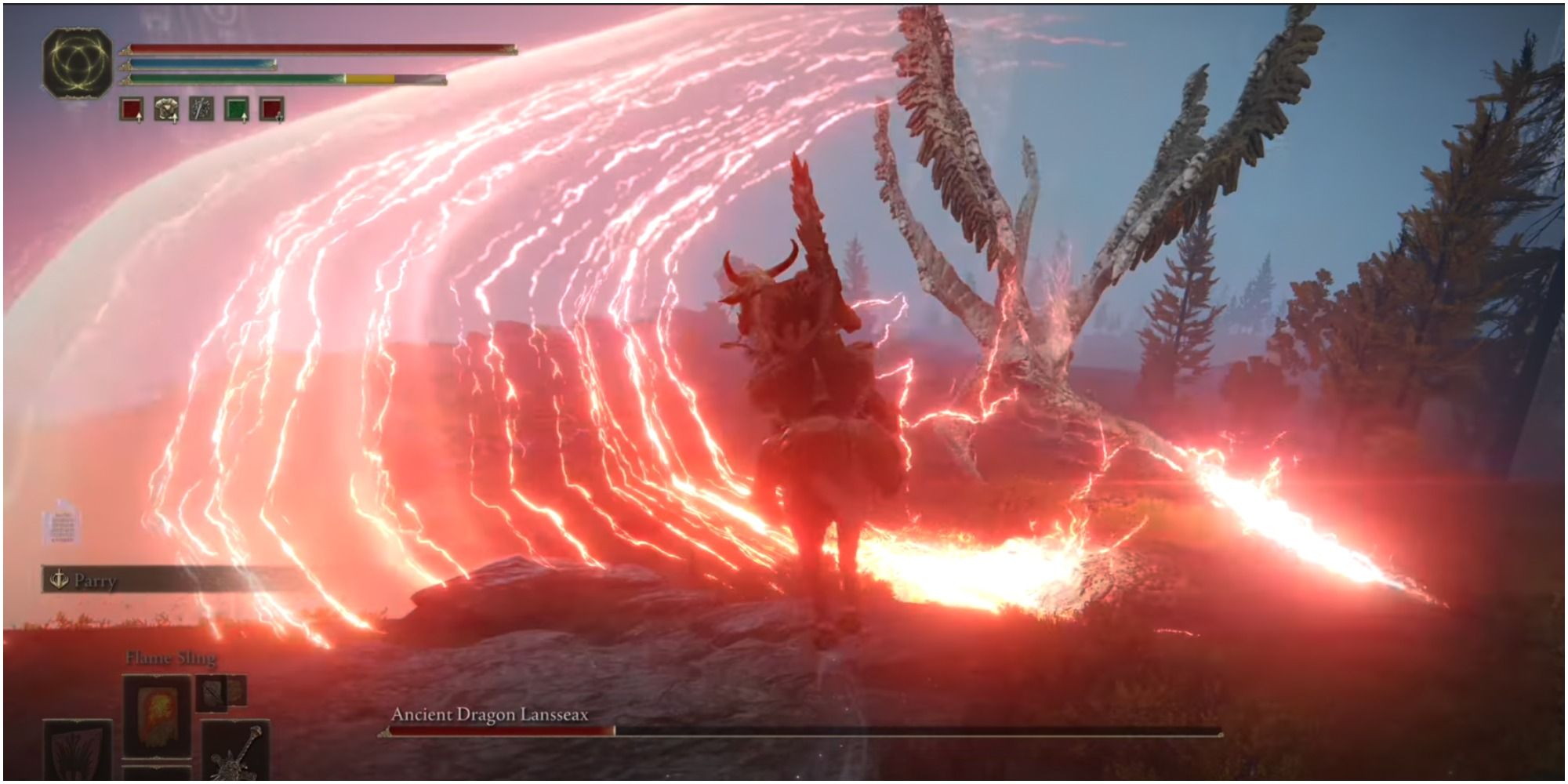 Perhaps Lansseax's most notable attack, she uses her glaive to slice a wide, devastating arc down toward the ground. 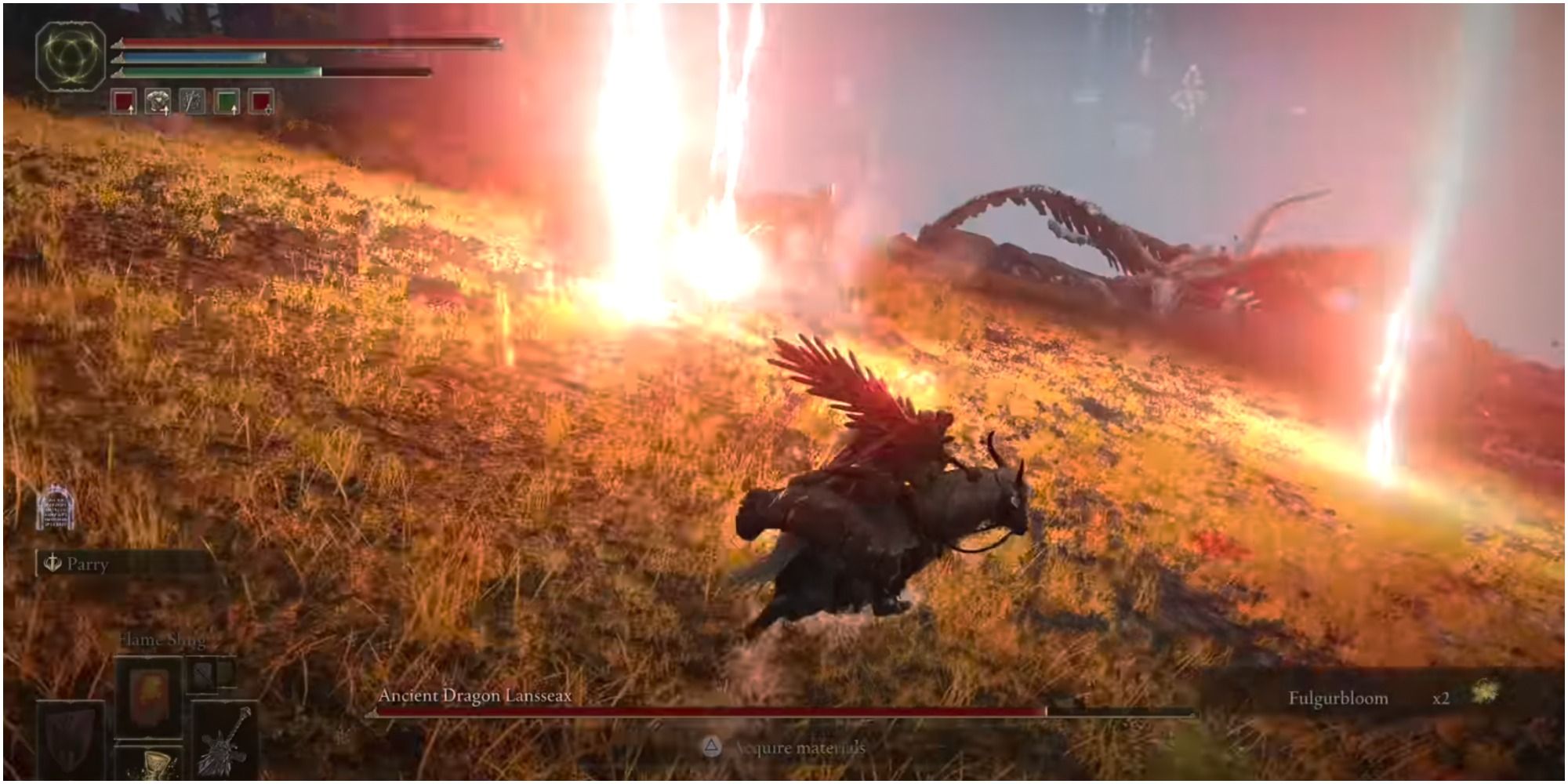 Lansseax rears up from the ground with a scream, which causes golden spots to dot the ground and red lightning showers to appear.

Counter: Using Torrent, manoeuvre around these glowing spots to avoid the lightning shower. Also, continue to keep an eye on Lansseax's movements. 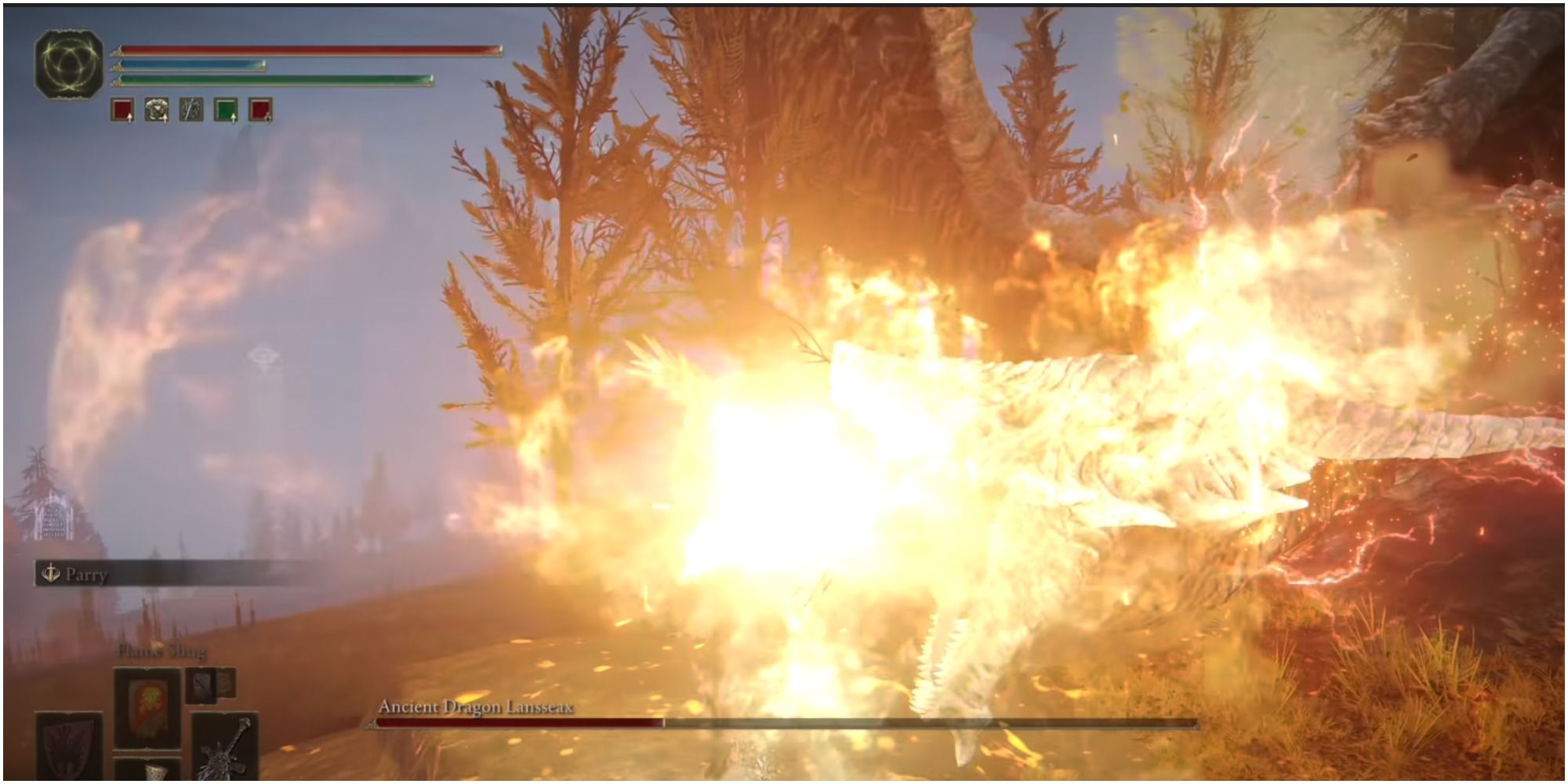 Like any other dragon, Lansseax has her fire breath attack. Either she unleashes it on the ground or does so from the air.

Counter: Roll or ride away on Torrent toward the opposite direction of the fire's trajectory. 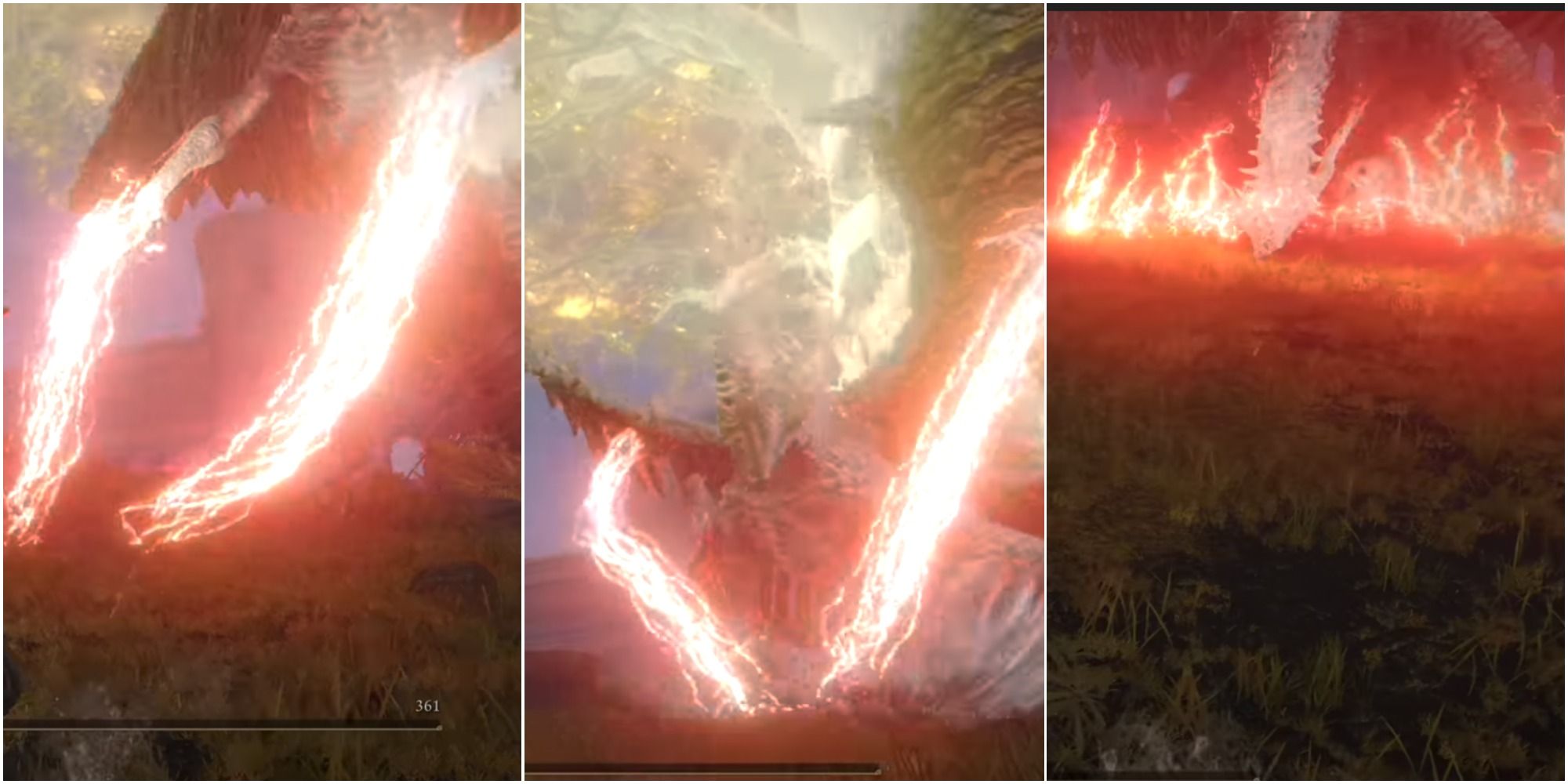 Lansseax will raise her claws from the ground and a bright streak of lightning will follow. She then slams her claws, causing a flurry of red lightning to erupt along the ground.

Counter: Gallop away from this attack's wide range. 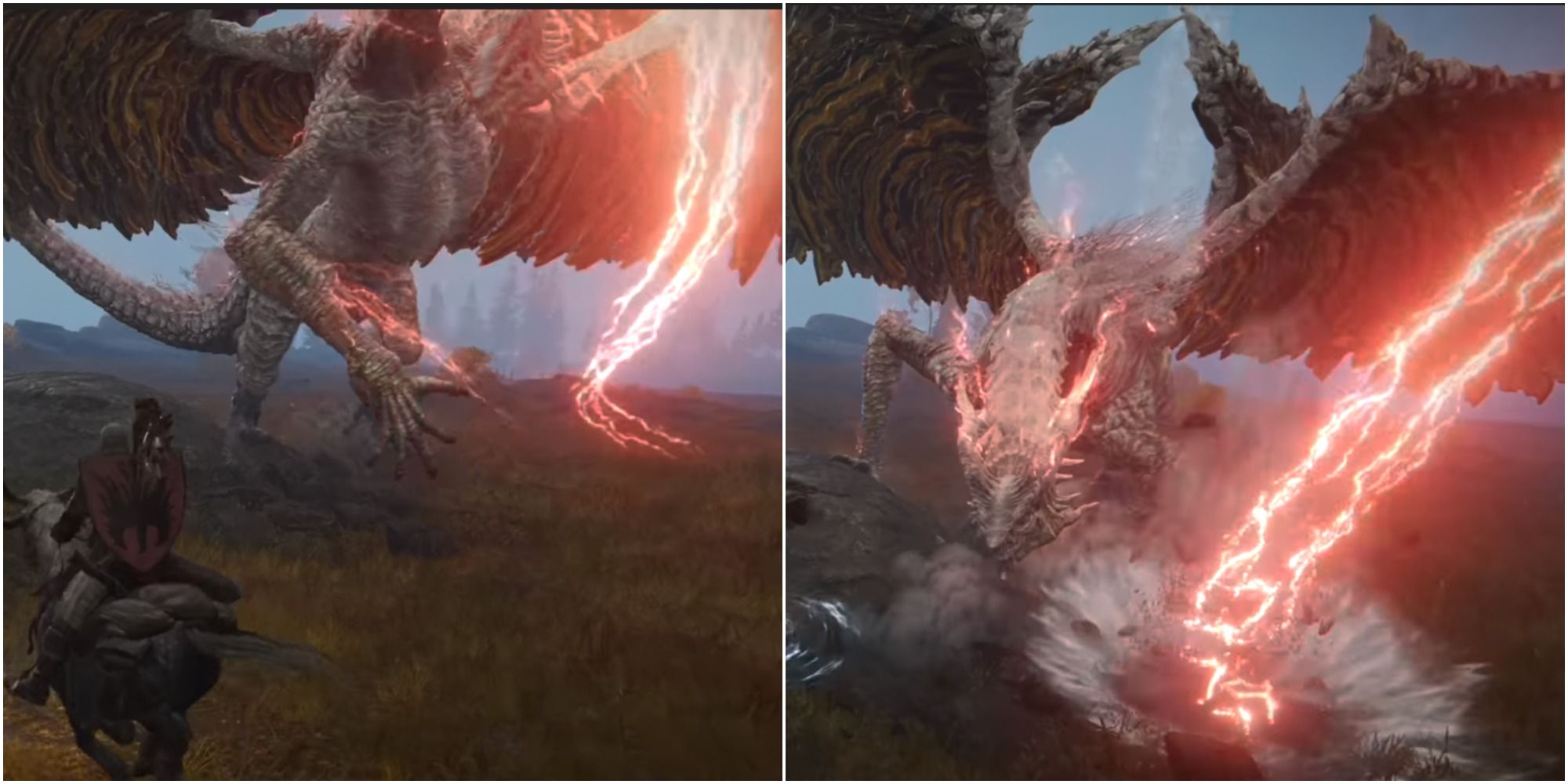 Using only one claw, Lansseax raises her claw before slamming it down.

Counter: If you're on foot, roll twice to the side. But if on Torrent, gallop in the opposite direction of the attack. 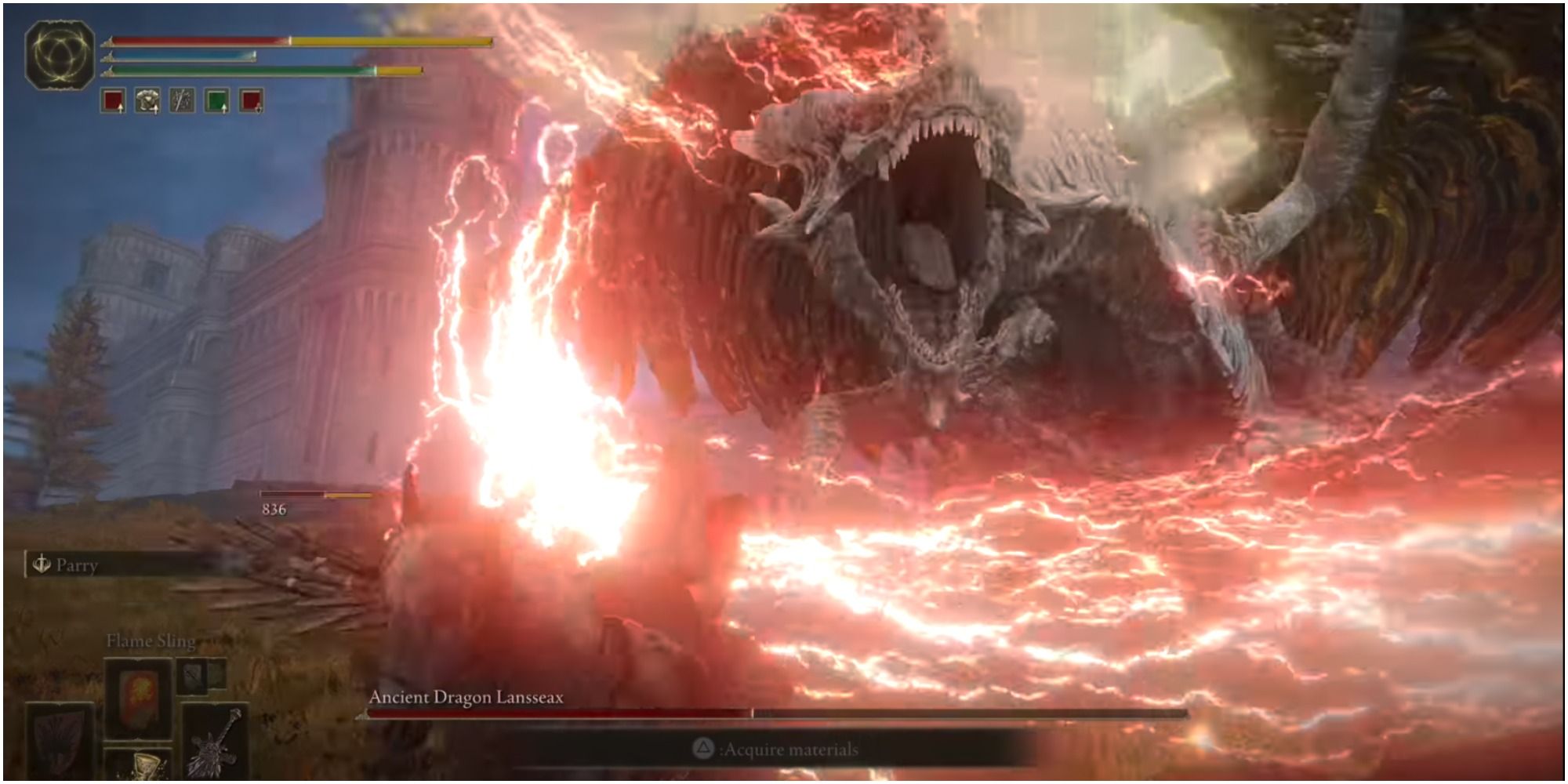 A more aggressive version of the prior attack, Lansseax swipes her claw at you, leaving a flurry of red lightning that deals further damage.

Counter: Roll inward or stick to Lansseax's back legs. 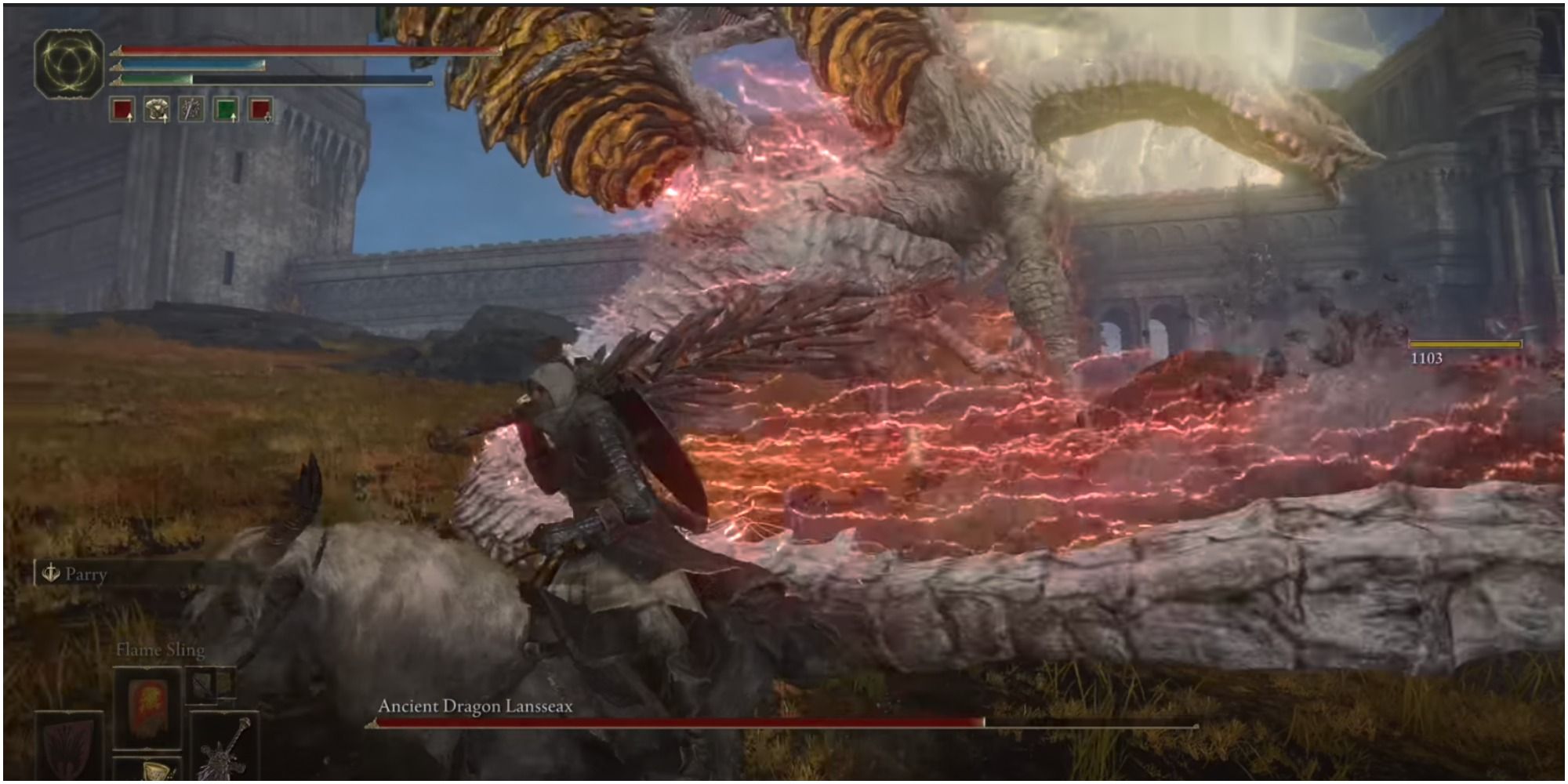 Lansseax will turn and do a full sweep with her tail.

Counter: Perform a double jump on Torrent or roll back out of range of her tail. 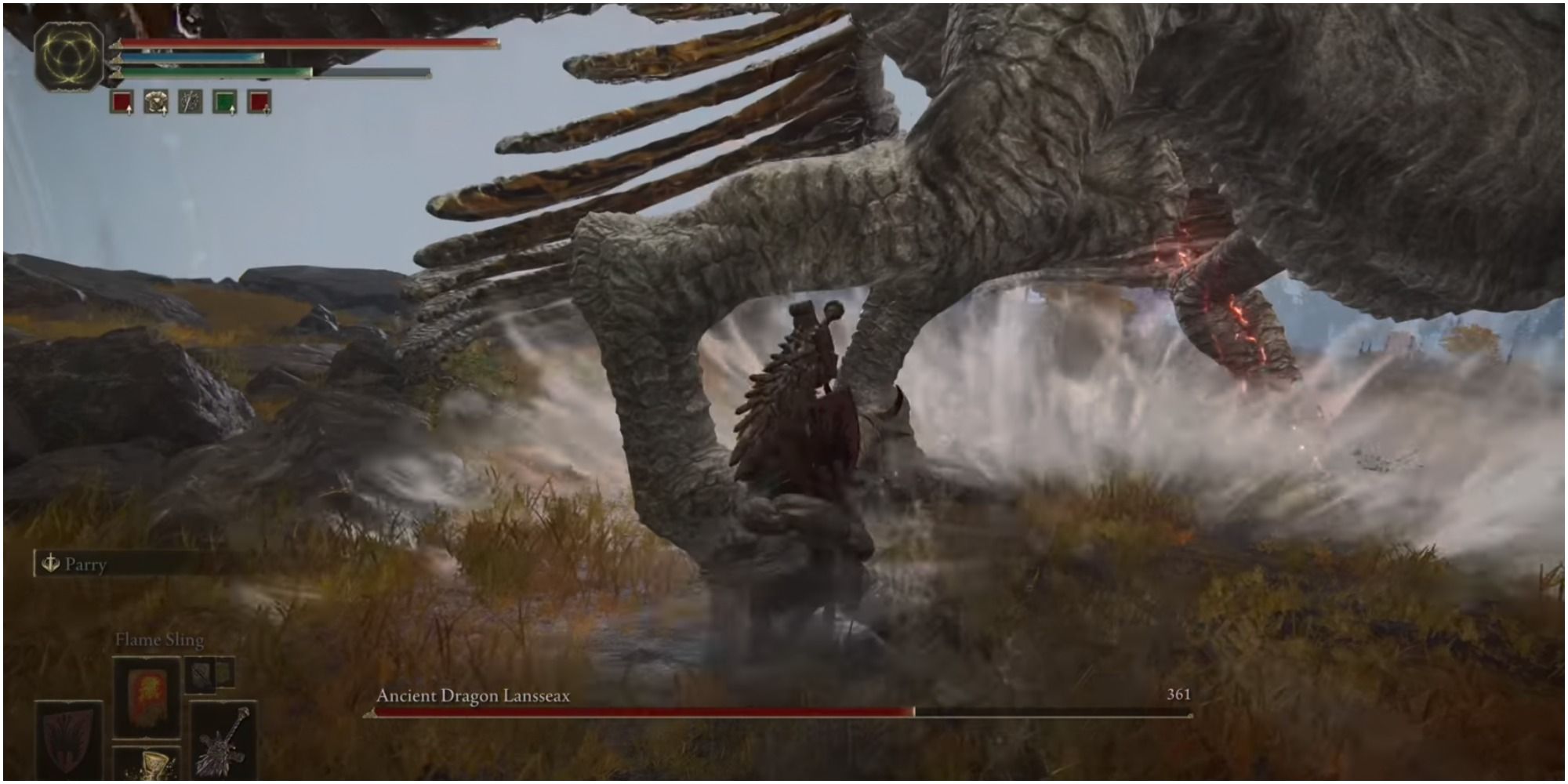 Lansseax will beat her wings thrice, causing damage each time.

Counter: Gallop away from this attack as soon as you notice her standing still and moving her wings. 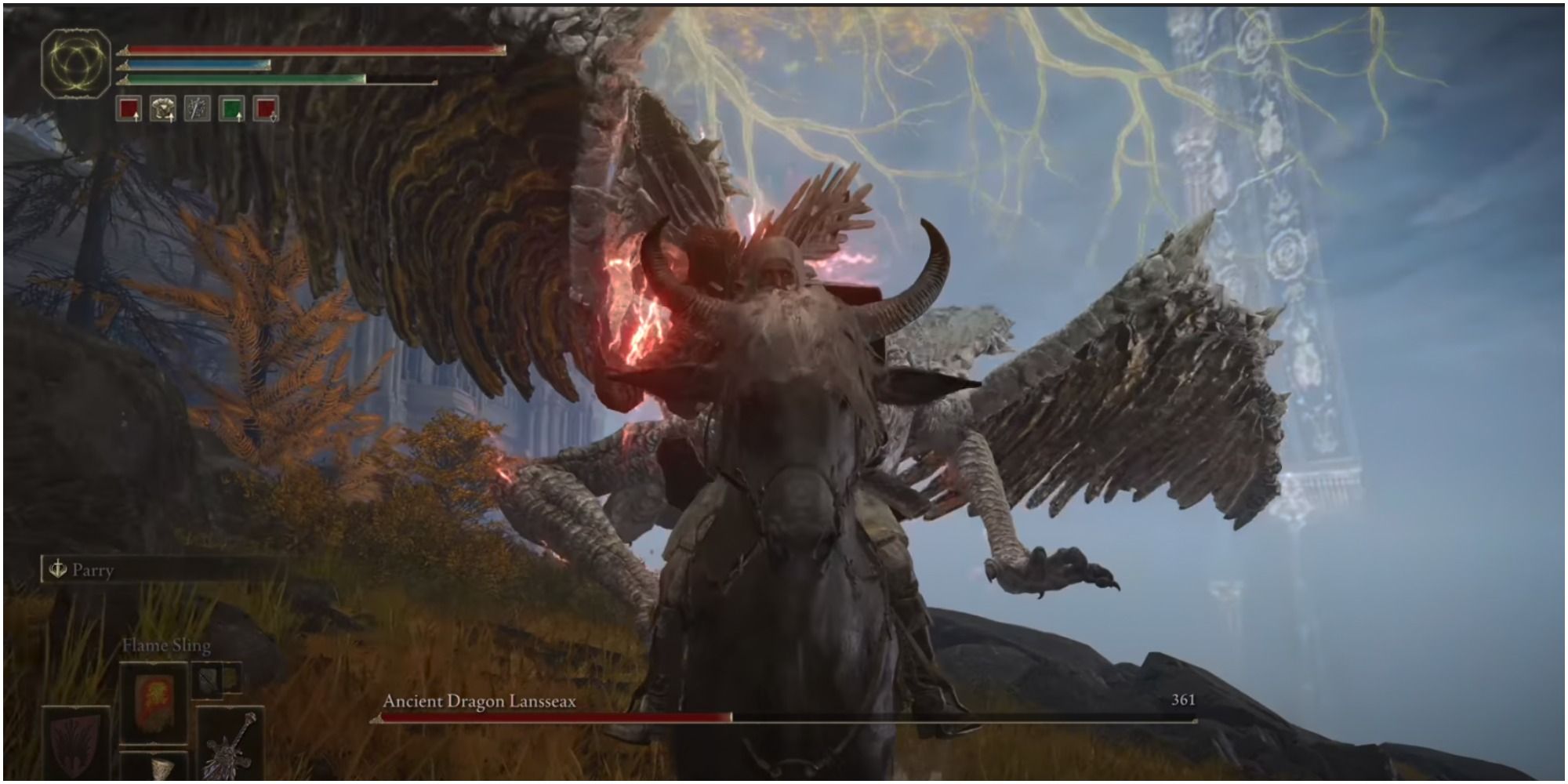 If you're opting for a frontal on-foot attack, she'll most likely swipe her head with her maw open to bite you.

Counter: Roll to the opposite direction of each bite or simply gallop away on Torrent. 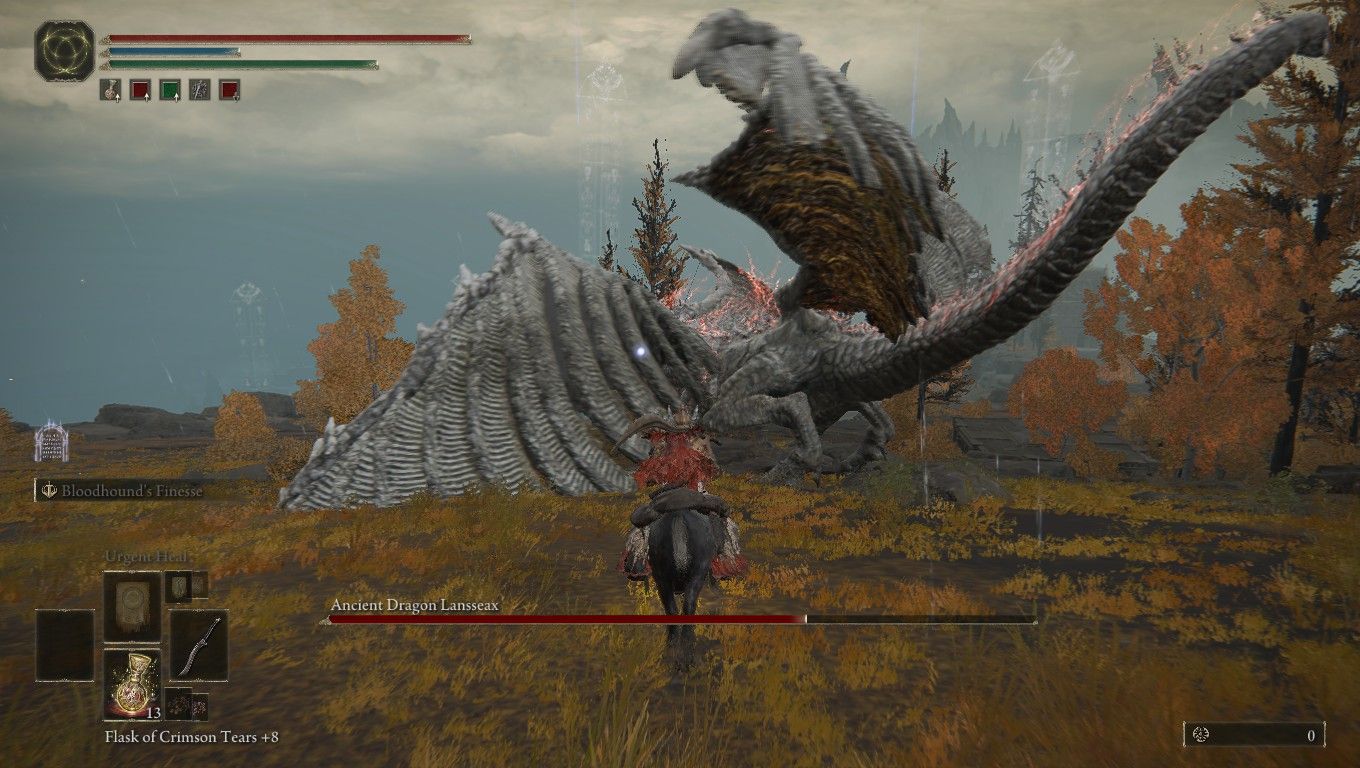 There are two differing battle strategies you can use to tackle Lansseax once and for all. This dragon is immune to a large variety of attacks but is vulnerable to immense, physical attacks, as well as hits to the head. For both melee and ranged combatants, as mentioned before, it is highly recommended to keep Torrent's whistle handy or fight entirely on horseback. 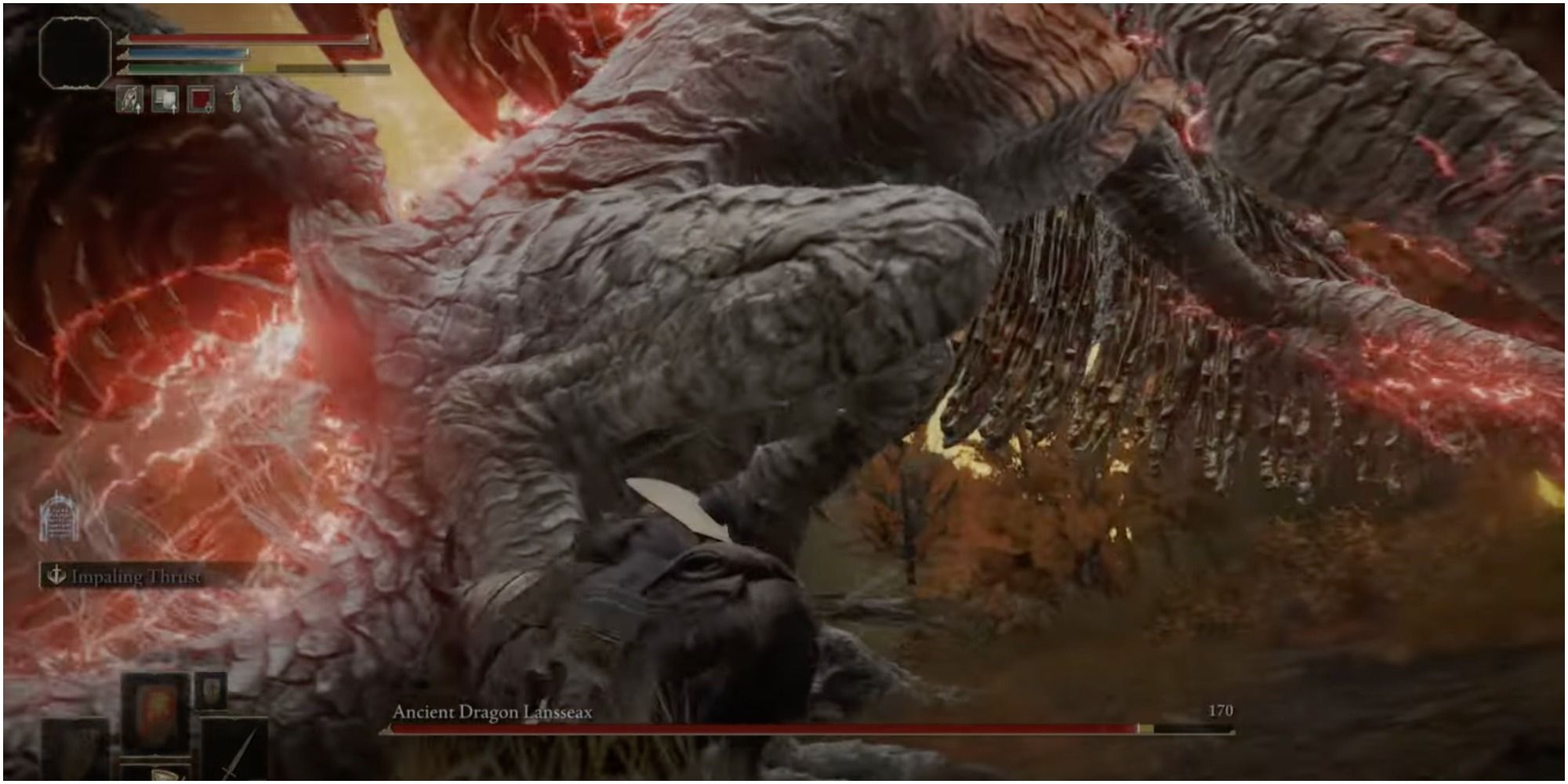 For melee combatants, arming yourself with a weapon that deals great physical damage is best. For example, using Moonveil Katana +6 or Bloodhound's Fang +7 is powerful enough to defeat Lansseax. Using heavy blades like their Colossal Swords-type weapons will be helpful for inflicting massive physical damage. You can consider using Grafted Blade Greatsword or Starscourge Greatsword (if you've already defeated Radahn). As for Ashes of War, using Seppuku on your blade will do amazingly against Lansseax.

As for Spirit Ashes, tanky summons is definitely the ones you should look out for. Mimic Tear is a Spirit Ash you should consider that could distract Lansseax while you inflict damage.

It is best to stick to Lansseax's back legs since Lansseax's frontal attacks are simply deadly. However, you can't always stick to her back legs since some of her lightning attacks could spread to her hindquarters. Keeping out of range while swooping in for a couple of hits is always best when it comes to FromSoftware boss fights – especially for Lansseax. 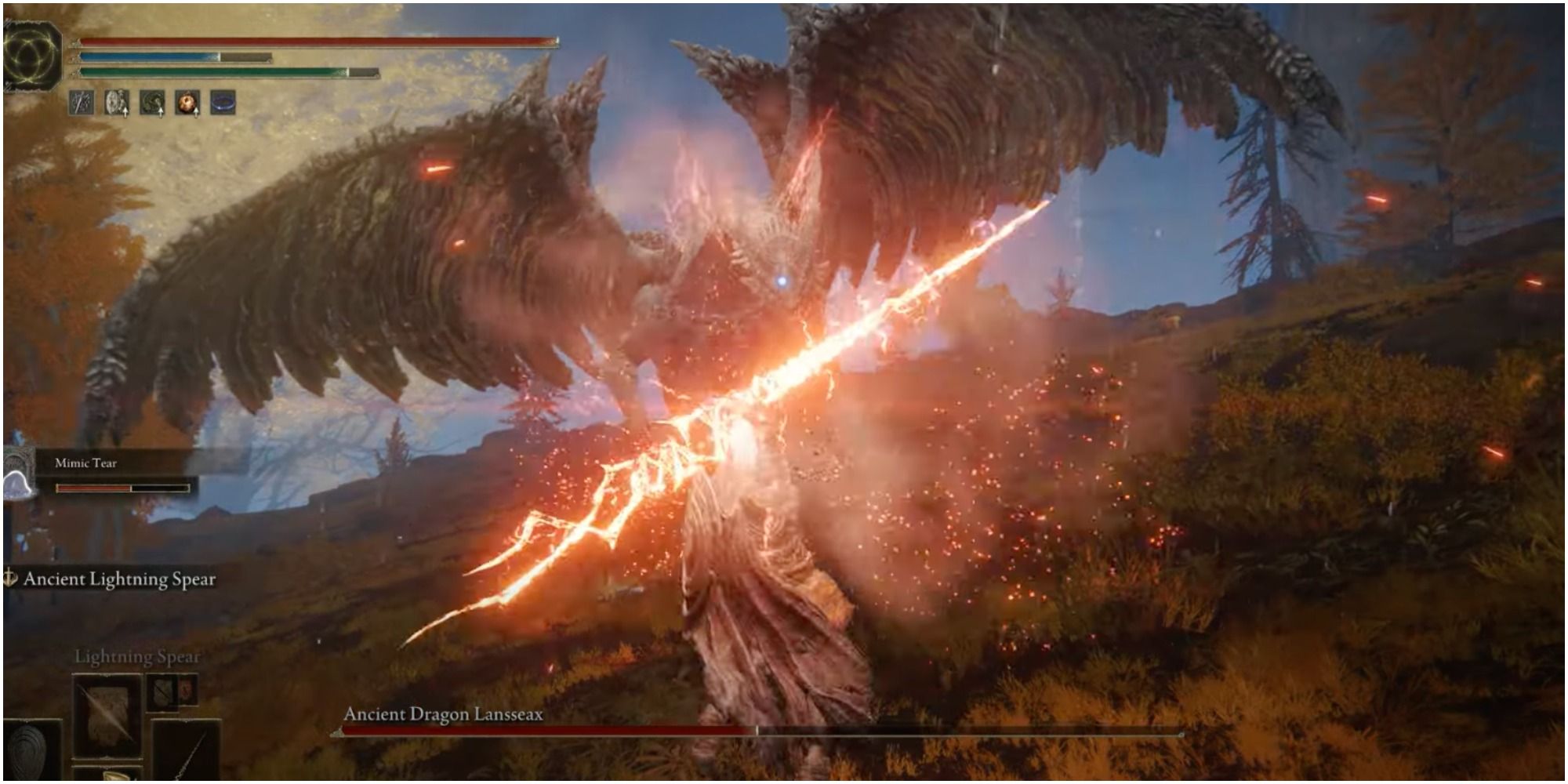 Although you might think a ranged strategy is more advantageous than melee fighters, Lansseax can make up for that distance frighteningly quickly. So, using sorceries that inflict immense physical damage is recommended. You can never go wrong with Rock Sling and Comet Azur, but you can also think about using Shard Spiral or Great Glinstone Shard.

You can actually cheese Lansseax during the first encounter by setting off Poison Mist whilst hiding. Equipping Opaline Bubbletear in your Flask of Wondrous Physick combinations will boost your defensive capabilities in this chaotic fight. Again, using the Mimic Tear summons is recommended to keep Lansseax's eye off of you.

New I Expect You To Die, Resolution MR Projects Spotted