With a respectful apology to those teddy-like Moogles, there is nothing more iconic to the Final Fantasy brand than the Chocobo. Are they cuddly companions or oversized chickens? The answer, of course, is yes.

Chocobos made waves in Final Fantasy 7 for their availability as racing mounts and professional breeding stock. Players could visit the Gold Saucer, the game's flashy entertainment district, to partake in all the fun. It's only fitting that Final Fantasy 14, an endless celebration of Final Fantasy's past, present, and future, would also have a Gold Saucer.

All that riding and racing is back and better than ever. Given FF14's perennial popularity, it's a sure bet more franchise fans are discovering the thrills of Eorzean Chocobo racing all the time. Raring to get started on the racetrack? Give yourself a competitive edge — take a few moments to read our guide.

How to Unlock Chocobo Racing 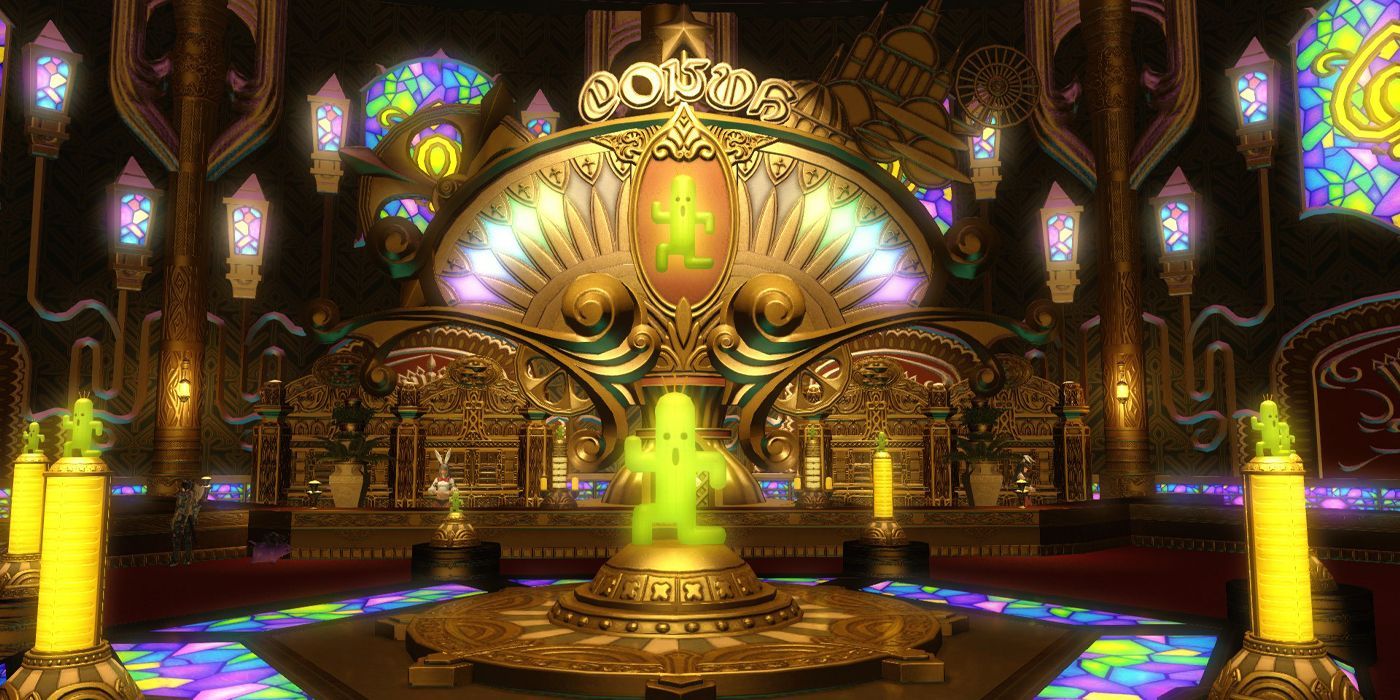 Before you can meet your bird and say the word, you must be granted access to the Gold Saucer itself. Thankfully, this happens fairly early into A Realm Reborn, so you'll have hundreds of hours to soak in the sights going forward.

Players must complete their region-specific envoy quest. These are essentially the farewell quests for the very first stretch of the game's story, and they vary in nature because there is one each for Gridania, Ul'dah, and Limsa Lominsa, respectively. Your role as envoy will bring you to the other two major starting cities in an official capacity for the first time.

Once you've fulfilled your role in the matter — you'll know you're ready because the next main story quest unlocked is "Call of the Sea" — head back to Ul'dah and walk southeast a bit from the Ul'dah Aetheryte Plaza. Speak with a Well-Heeled Youth who will provide you with a new quest called "It Could Happen To You" at (X:9.6, Y:9.0).

Per the quest's guidance, meander your way to the Airship Landing, where you'll now be able to fly out to the Gold Saucer. Your arrival soon prompts another quest at (X:5.3, Y:8.0), "World of Wonders," which is really just a fancy way of saying you're being given a tour of the Gold Saucer's many splendors.

Traipse to Chocobo Square to initiate "So You Want To Be A Jockey" at (X:6.1, Y:4.8). Because you do want to be a jockey. Right? Good, so get a move on to Bentbranch Meadows in the Gridanian region, soak in a cutscene, and get yourself back to Chocobo Square. It's time to ride. 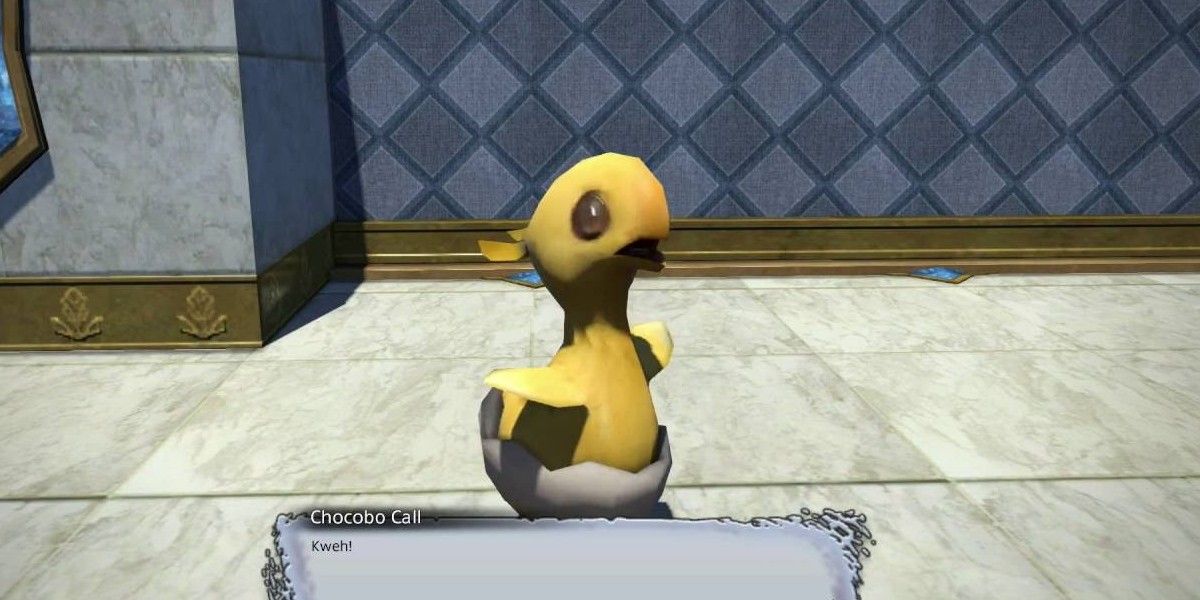 Now exchange that Fledgling Chocobo Registration you snagged from Bentbranch for your very own racing Chocobo. The game cleverly provides hundreds of potential word combinations for naming your Chocobo, which gives players a decent shot of having a relatively unique name without allowing the trolls of the internet to saddle their poor birds with references to certain dates and associated smoking rituals.

The good people of Chocobo Square will now instruct you to complete a training course. This course should serve to familiarize you with Chocobo racing's controls, as well as a general sense of what it's like to ride your beloved chicken across the track.

Since so many players own FF14 on PC, and the controls are fully customizable as such, we'll refrain from listing things out verbatim. The most important thing to understand right off the bat here is that holding accelerate throughout an entire race is a bad idea.

Your Chocobo's stamina gauge is rather like how much fuel a car has left in its tank; running out mid-match means stuttering exhaustedly toward the finish line. Needless to say, you'll lose any real race. 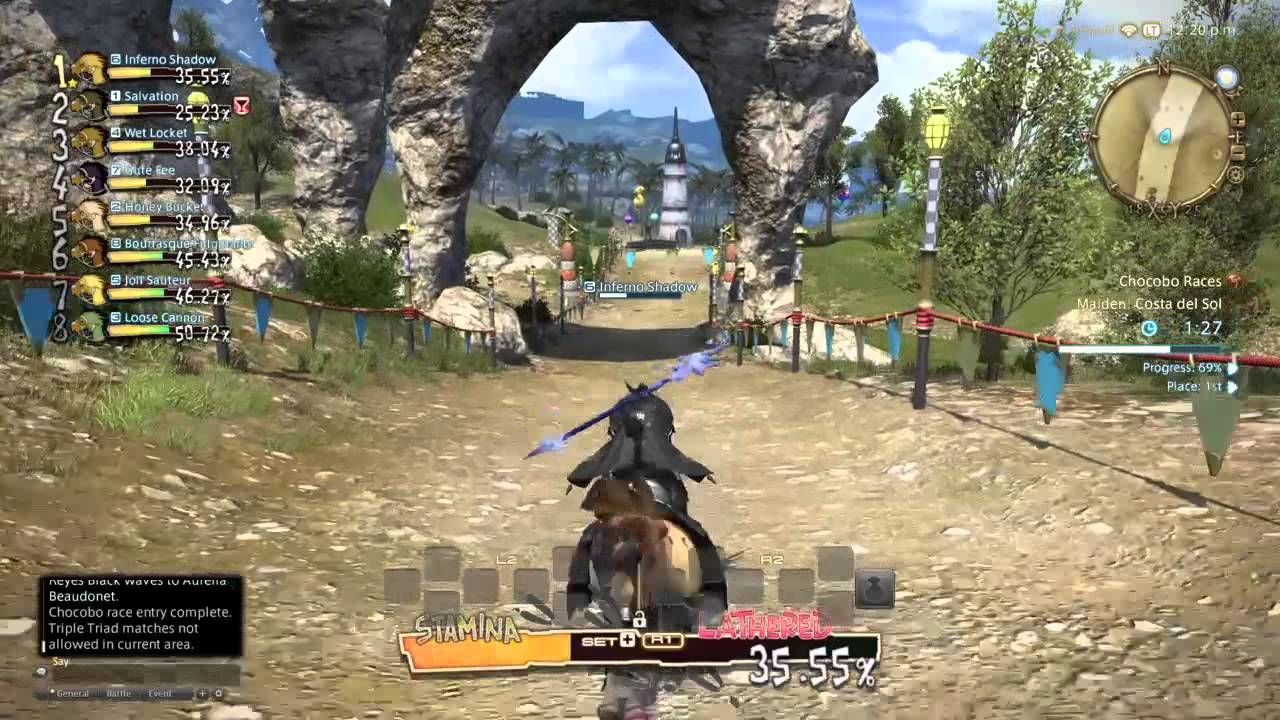 Time to get technical. Final Fantasy 14 is a crunchy game, with crunchy numbers and mechanics; Chocobo racing is no different. There are systems within systems and it's easy to get lost. But, as with most things FF14, a little bit of knowledge is often all you'll truly need.

Chocobos range in rank from one to 50, though it's worth noting that they can be retired at 40. (More on that later.) Chocobos rise in rank through completing races, so there's no secret formula involved here. Each rank hike elevates five randomly-selected stats by one percent of the potential maximum. Your Chocobo will also learn an ability (this, too, is randomized) at rank ten.

Rating is fundamentally similar to rank — it rises in tandem with the rank-related stat increases. Rating dictates the level of challenge available. Higher ratings open the doors to tougher races, so you can think of the whole thing as Final Fantasy 14's Chocobo advancement shtick.

Abilities are nifty (and at higher levels of play, invaluable) automatic assets. Chocobos learn an ability at rank ten. Alternatively, you can purchase an ability outright from one of the vendors in Chocobo Square. A second ability is acquired through breeding, so if you're just starting out, don't worry about that bit.

You will no doubt notice that there are variances in the effectiveness of certain abilities. These variances are tied to the level of multi-level abilities, such as Choco Cure I, II, and III. Furthermore, some abilities are passive, whilst many others can be manually employed during a match. The differences between the two are fairly obvious — you can't exactly attack another chocobo with a boost in awarded experience points per race. 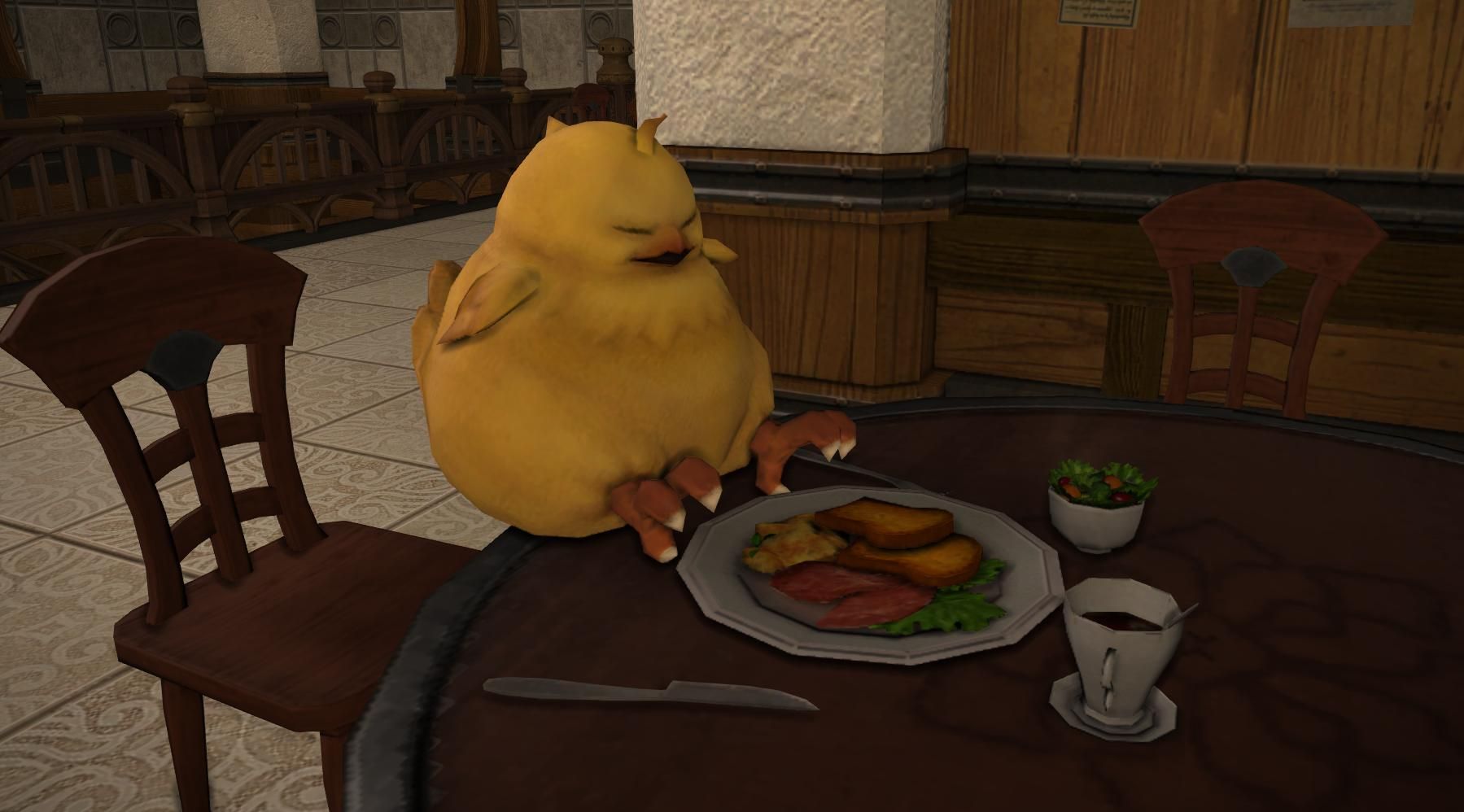 Make sure to feed your Chocobo between rank-ups. The feeding sessions are stockpiled, which means if you miss a few chances during training bouts, don't worry. Your (especially hungry?) bird will be ready for a feast.

Feeds come in five distinct types, one per stat, and each type has three tiers. Frankly, there's no good reason not to splurge on the highest grade of feed whenever possible. These can be purchased for 1,345 MGP in Chocobo Square.

Pedigree is, without exaggeration, the reason why players breed Chocobos in the first place. Pedigree ranges from one to nine. That starter Chocobo of yours is going to have a lowly rating of one, but that's OK! Once a Chocobo is retired at rank 40 or higher, it is eligible for breeding.

You can breed your retired Chocobo with a Chocobo of the game's choosing; later on, when you have multiple retired birds, it can be, well, politely requested that they shack up on your behalf. Increasing pedigree is easy, if time-consuming. The pedigree of the newly-hatched Chocobo will be equal to the pedigree of the lower-tiered parent plus one. As such, expect your first breeding session to bring forth a Chocobo with two pedigree. So on, so forth.

What's the point, anyway? That's simple: higher pedigree equals higher maximum stats. Each successive tier is treated to a whopping 40 more maximum points in each stat. To put this into practice, and thus illustrate why this is so important, a one-star first-pedigree Chocobo (otherwise known as your starter) will have maximum stats of 100. A three-star ninth-pedigree Chocobo multiplies all that by five to a colossal 500.

That is one robust raptor. 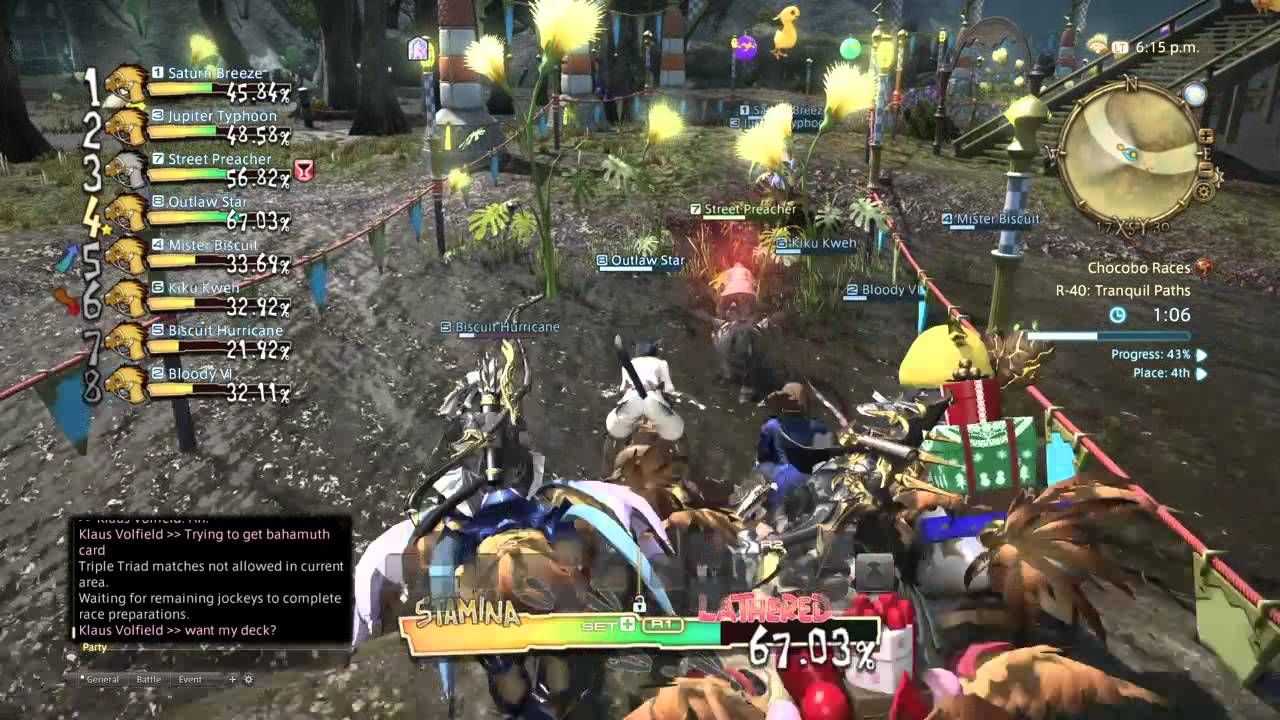 There are three racetracks: Sagoli Road, Costa del Sol, and Tranquil Paths. Players can select a specific track or just let the Duty Finder queue choose whichever one's most available. Either way, registering for a race is not unlike registering for any other duty.

Each track has its quirks, but they all share several things in common. You'll spot colored panels at set points, so it's important to understand what's up with these. Strictly speaking, blue and green are good. Red and purple are bad. To be specific about it, blue panels grant a short burst of speed and green panels restore stamina by six percent. Red ones reduce stamina by 15 (!) percent; purple ones cast Heavy for five seconds, which reduces speed significantly while active.

You won't see them at first, but once you've progressed far enough in the ranks, hazards will begin to spawn as well. These come in varying forms, including blatant monstrous foes. Just do your best to avoid them.

Weather is also worth mentioning. There are several "flavor text" descriptors like Sunshine and Clear Skies, but cut through the jargon and pay attention instead to the three overarching categories: Fair, Foul, Neutral. Chocobos have weather preferences, so while there is no real way to choose the conditions you're getting yourself into at the start of a random race, be ready to either thrive or suffer accordingly.

The differences aren't huge, but to present an example, a Chocobo that prefers foul weather will have a speed increase of five percent during rainstorms and the like. Every bit helps.

Last but by no means least, treasure coffers confer special items. If you've ever played Mario Kart, think of these as those question mark cubes everyone rushes to grab. If you haven't, er, think of it some other way. And know that you're a rarity among gamers.

So, how to win races. That's the most important question, right? Here are some guidelines worth bearing in mind as you devise your strategies. 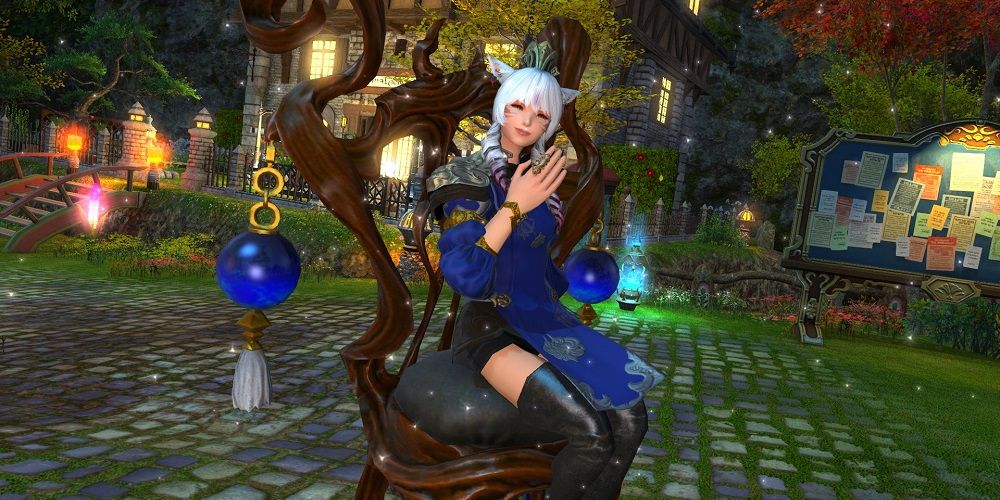 Some among us race for the thrill of it, breeding for the best and satisfied with it all purely on account of fun. But if that's all there was to this, Final Fantasy 14's Chocobo jockeying wouldn't exactly be a major event in the minds of the many.

As players complete races, a burgeoning new category called challenge races will be unlocked. Challenge races have MGP rewards, which means all those lovely expensive treasures like the Archon Throne seen above can be yours. Abilities are also received, and there's even an exclusive barding for completing them all. Check it out below.

How to overcome audio obstacles and improve engagement in video conferencing