The world of Final Fantasy 14 is changing, and it’s all thanks to its remarkable players. The in-game environment is no longer simply setting the scene for your Warrior of Light’s antics, but has become a new canvas for the community to stretch its creative muscles. Free Company housing is being used to design areas beyond the scope of what was intended, unleashing the likes of roleplaying venues, theatres, and cultural buildings.

A couple of months ago, I visited the Eorzean Aquarium. This project was helmed by Fruity Snacks, who, with the help of a few friends, put together an impressive venue that houses every single in-game fish. At the time, Fruity expressed his wish to create a network of museums and cultural venues in the game, and as part of this, he recently unveiled the Nature Museum on Malboro.

“There are only four items that you can use for ‘rocks’ in the interior of your house – with two items being added in 6.2. It’s difficult to make a lot of exhibits that you’d expect in a natural history museum that tell the stories I want to tell with so few rocks. Overall, I think this was a good start, though! I’ll be continuing to toy with the design of the museum over time, really trying to hone in on what I’m really, really after. When I’m ready to move on to a larger build, it’ll happen.” 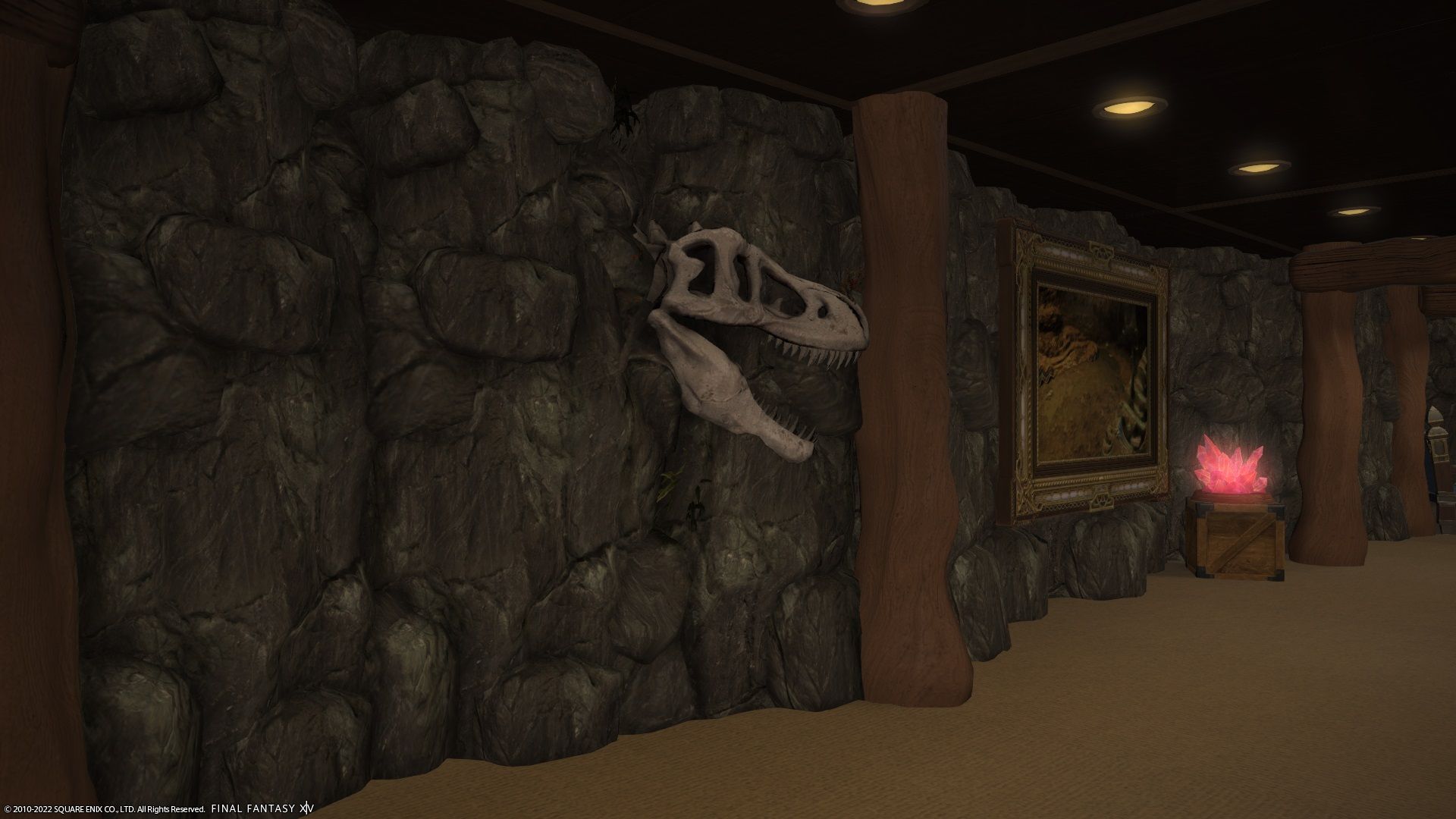 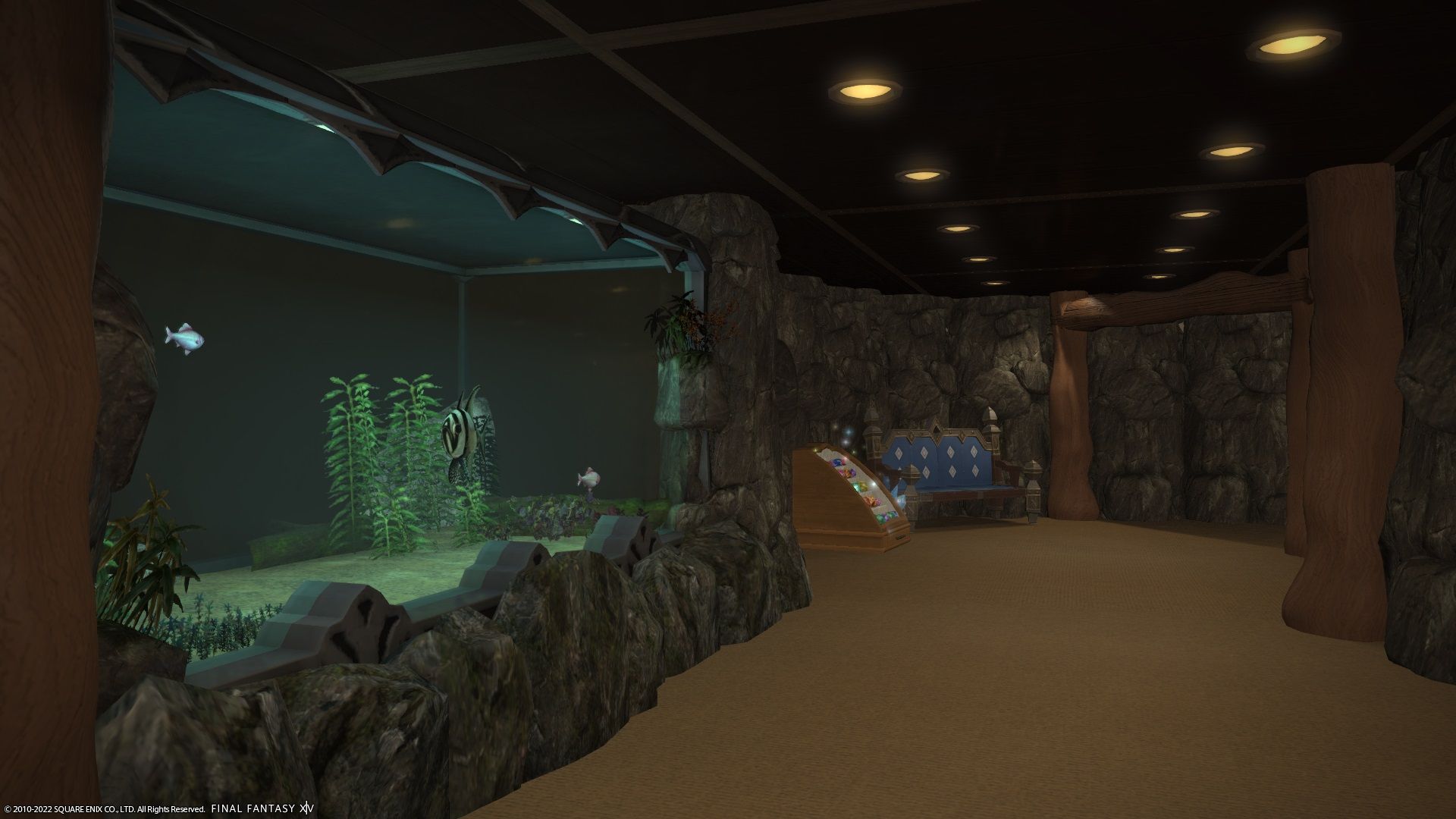 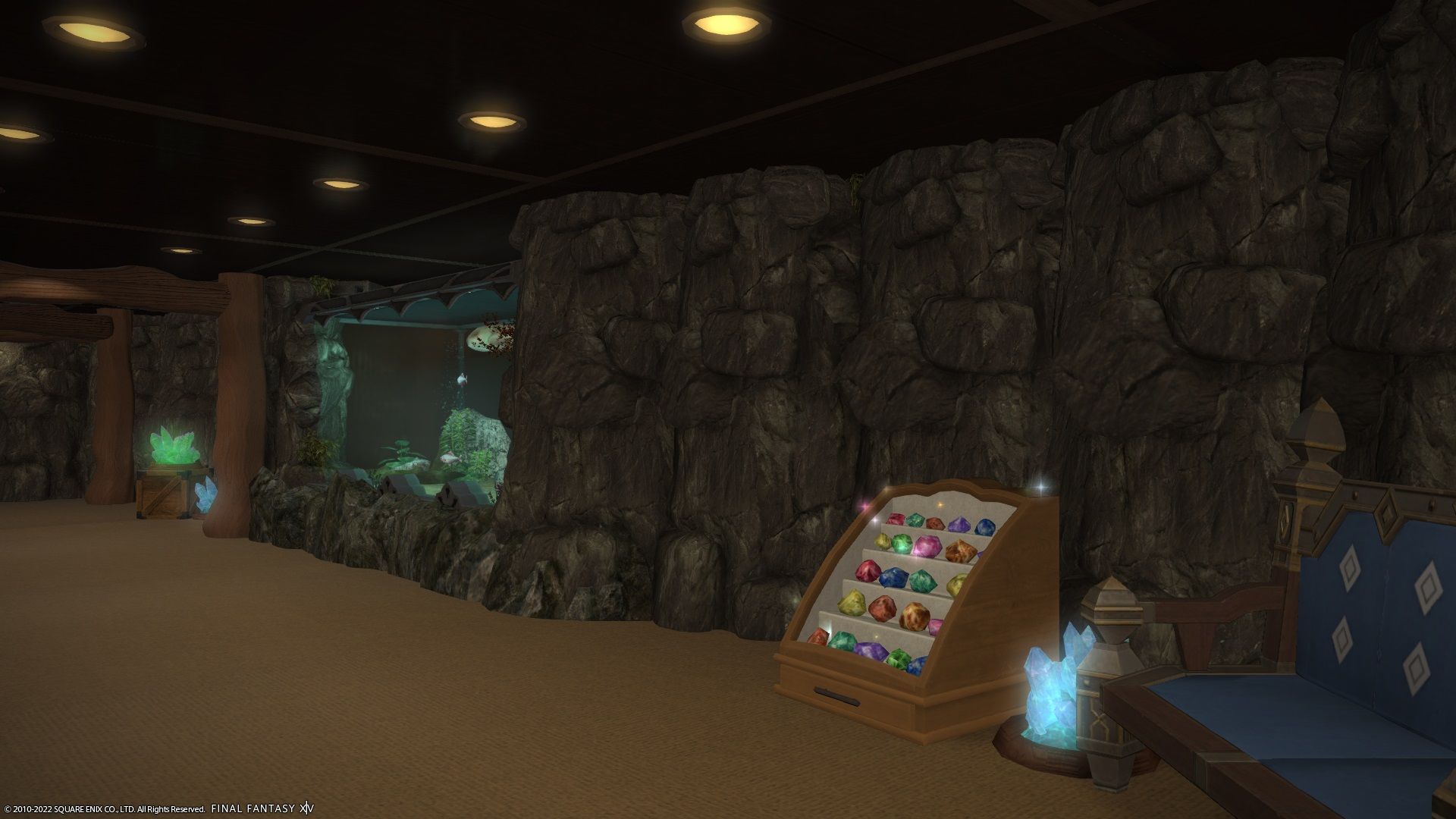 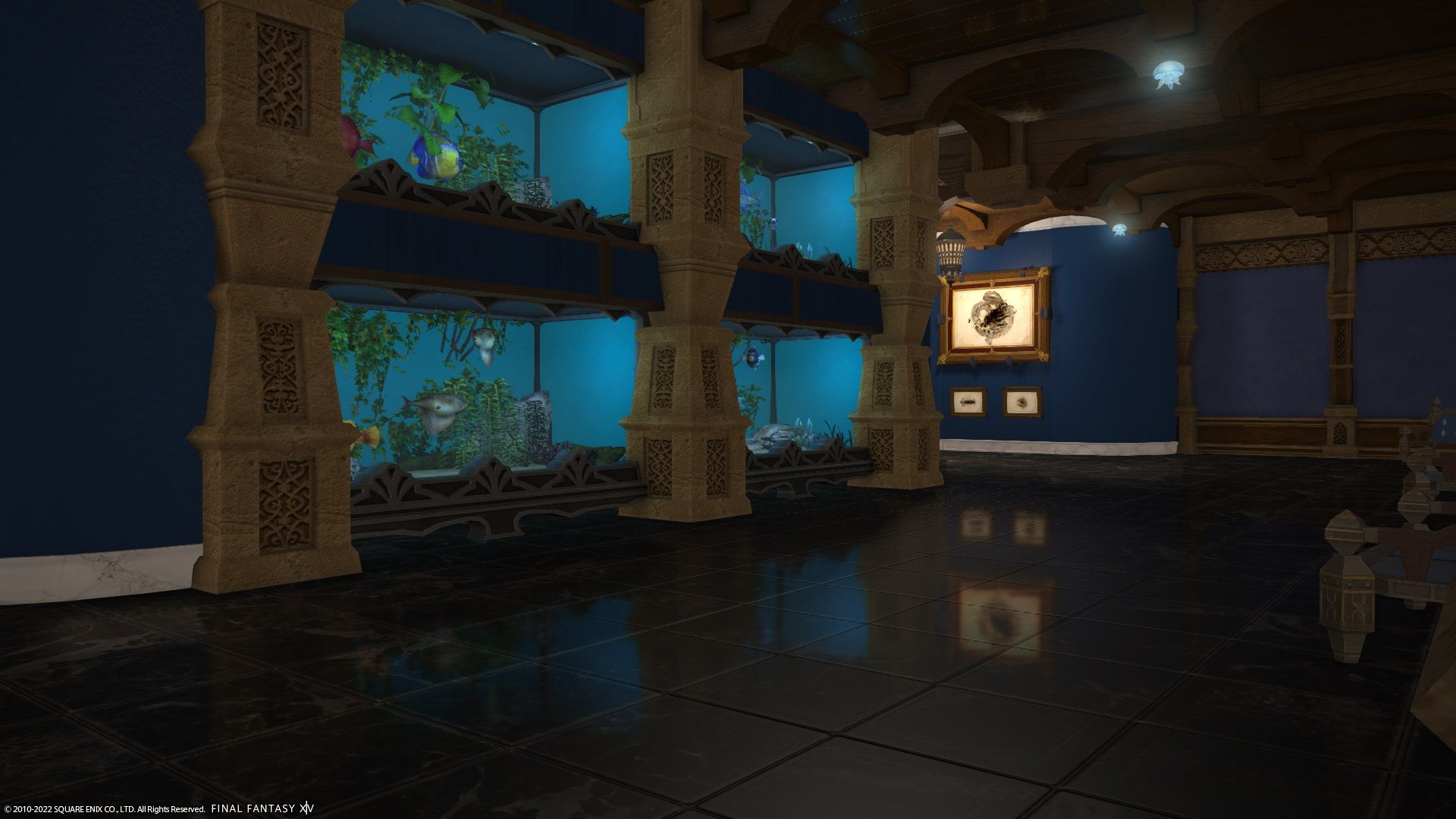 Fruity purchased the plot in late August and spent a couple of weeks building the museum before opening its doors to the public on September 11. It features a stunning conservatory area that displays every organic plant-based housing item in the game, excluding things you need to grow or morbols. The basement includes what Fruity refers to as ‘The MegaTank’, which is eight Tier 4 aquariums built to appear as though they are large floor-to-ceiling tanks. There’s also a cave room complete with fossils in the wall, which Fruity plans to tweak in the future by adding Flagstone Lofts – a housing item that is currently far too pricey to source.

“Since I had a rough idea of what I wanted to do, it was pretty quick to put together and get a list of what I wanted,” he says. “I did have some help from the Eorzean Aquarium Staff. Every indoor waterfall was crafted by Lucerna, the resident ‘Tataru’ of the Aquarium Staff. If you need something sourced, she’ll be able to get it for you – just like Tataru. Other donations of some submersible-only drops were made as well. On top of that, I had a lot of design feedback from the staff, which really helped shape the Nature Museum.

“The struggle with the build was achieving my housing goal of ‘using all the space.’ Large houses have a ton of space, and not really a proportional amount of furnishing slots. So it was really challenging to build out a layout that utilized every room and area of the house while still providing enough detail to sell the ‘use’ of that room. I just really do not like cutting off space in houses and will aggressively do what I can to make sure every square inch of usable space has a purpose. That was a difficult challenge to overcome with this build. Not sure I nailed it, but I’m happy with the result.” 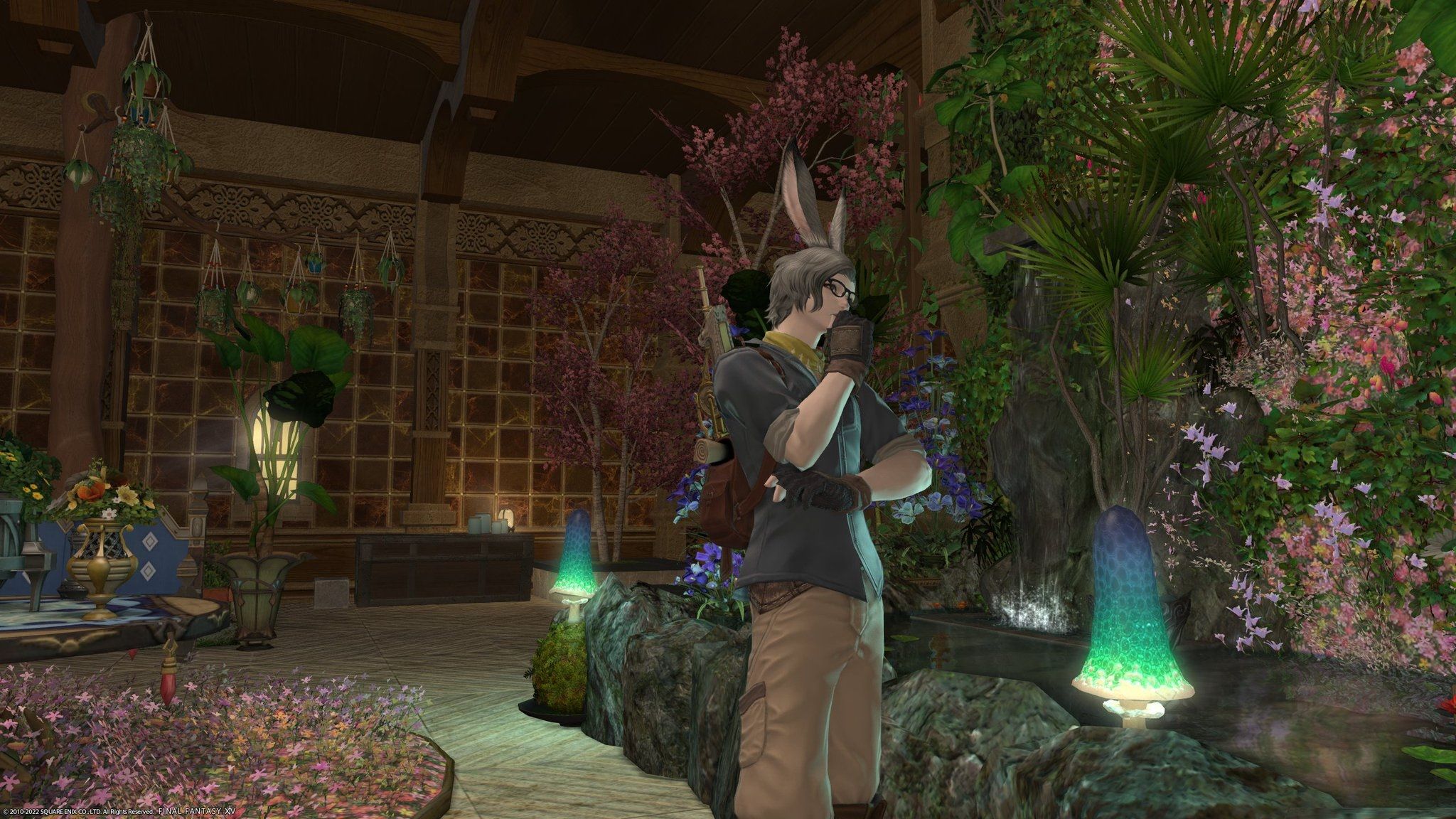 Fruity explains that he aims to help add something fresh to the community venue scene in-game. Most venues, especially on Crystal Data Center (where Fruity is based), are RP venues such as clubs, bars, and casinos. While these venues are well-loved by the player base, Fruity wishes to introduce more general and cultural locations and add more variety.

“When people joke about Crystal being the RP/casual server, it’s always referencing the imbalance of venues and the themes around those venues. Even if these clubs/bars/casinos/etc. weren’t the majority, they definitely are made out to be the only thing on Crystal. The Party Finder Other channel is 95 percent advertisements for clubs, casinos, bars, etc. You stand around in a major city on any server, and you see the advertisement shouts for these venues more than FC recruitment shouts. It paints a picture that everyone has a bar/casino/club/etc.

“So a big reason as to why I am so into making museums/cultural venues is to help break that idea people have about venues in this game and be like, ‘hey, we’ve got venues for those who don’t like that stuff too.’ If we can move the balance even a little bit on Crystal, then I can show that it’s possible throughout the whole game. On top of making space, I want to support people making the general/cultural venues and give them a huge spotlight and a microphone to let them do what they want to do. The Eorzean Aquariums and Nature Museums have really given me an opportunity to do that, and I hope to bring about a new wave of general venues.” 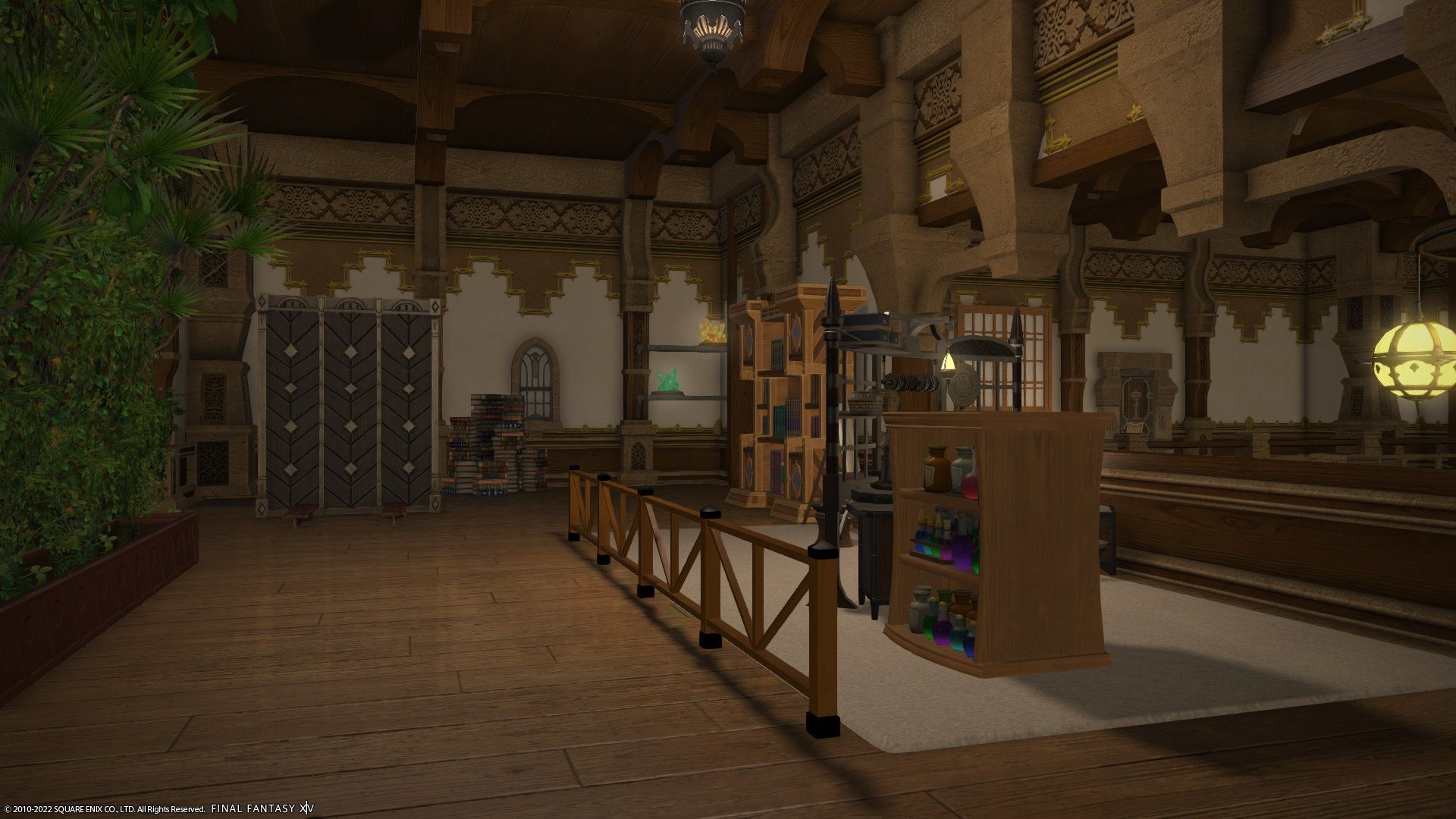 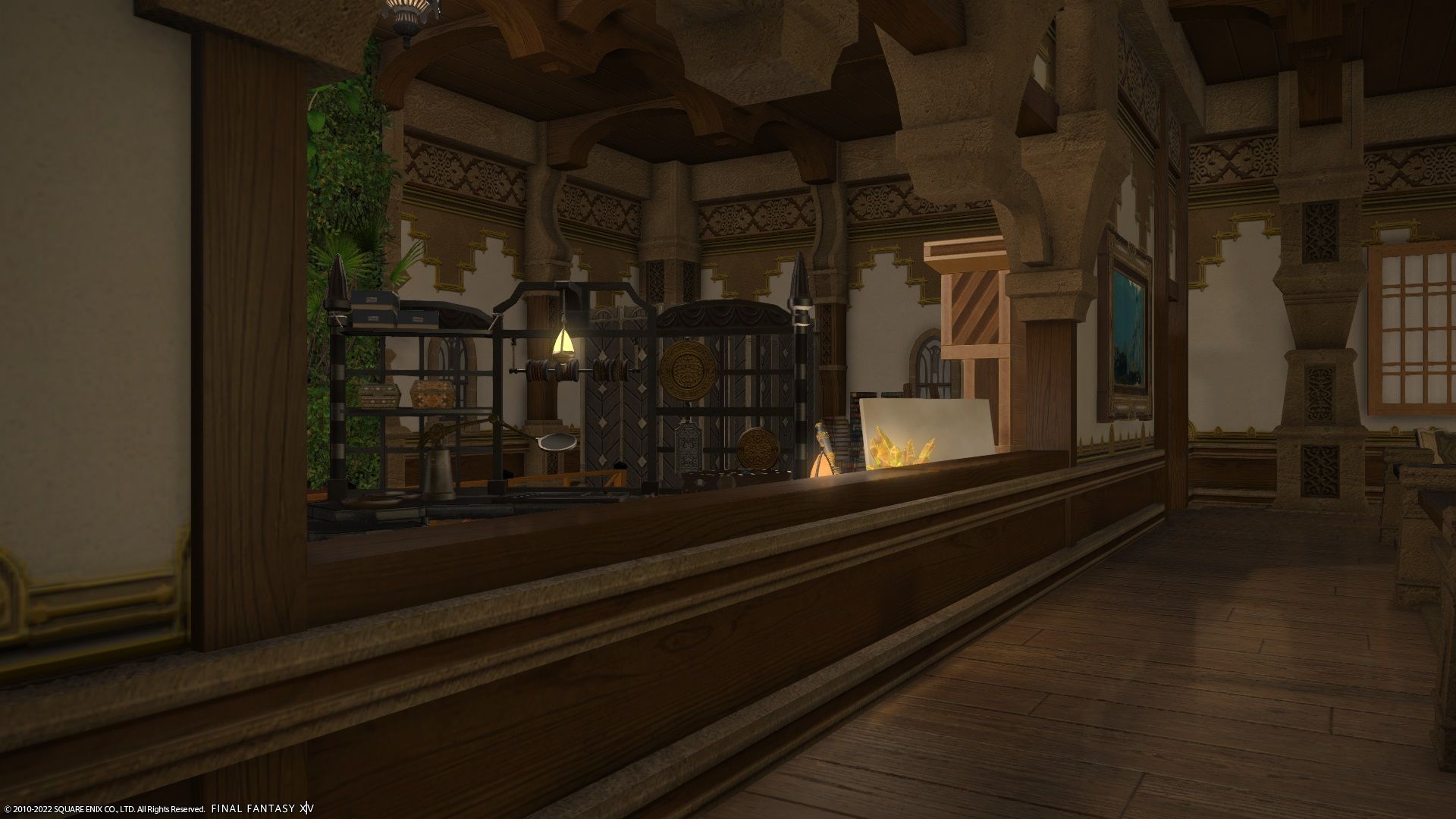 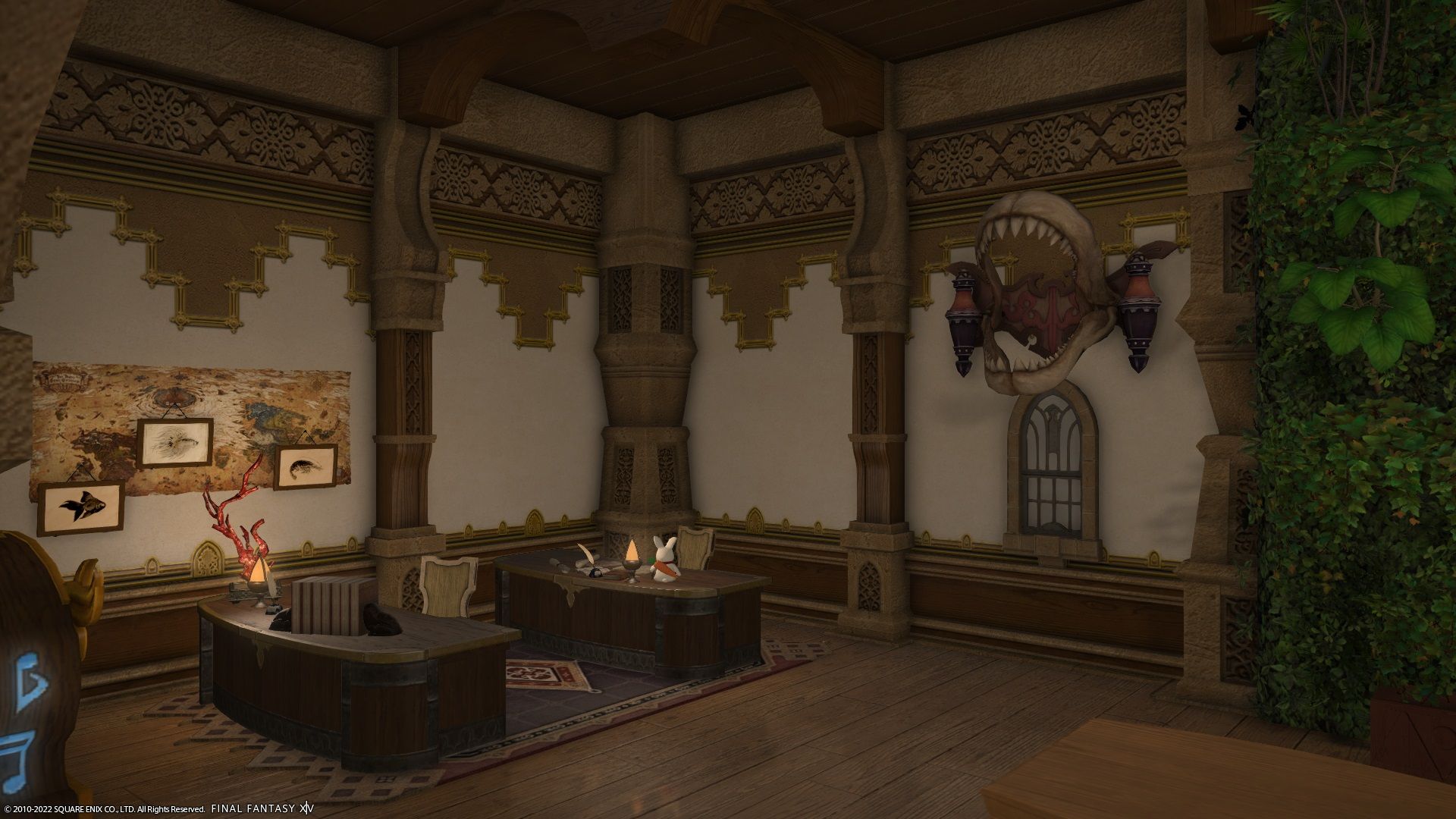 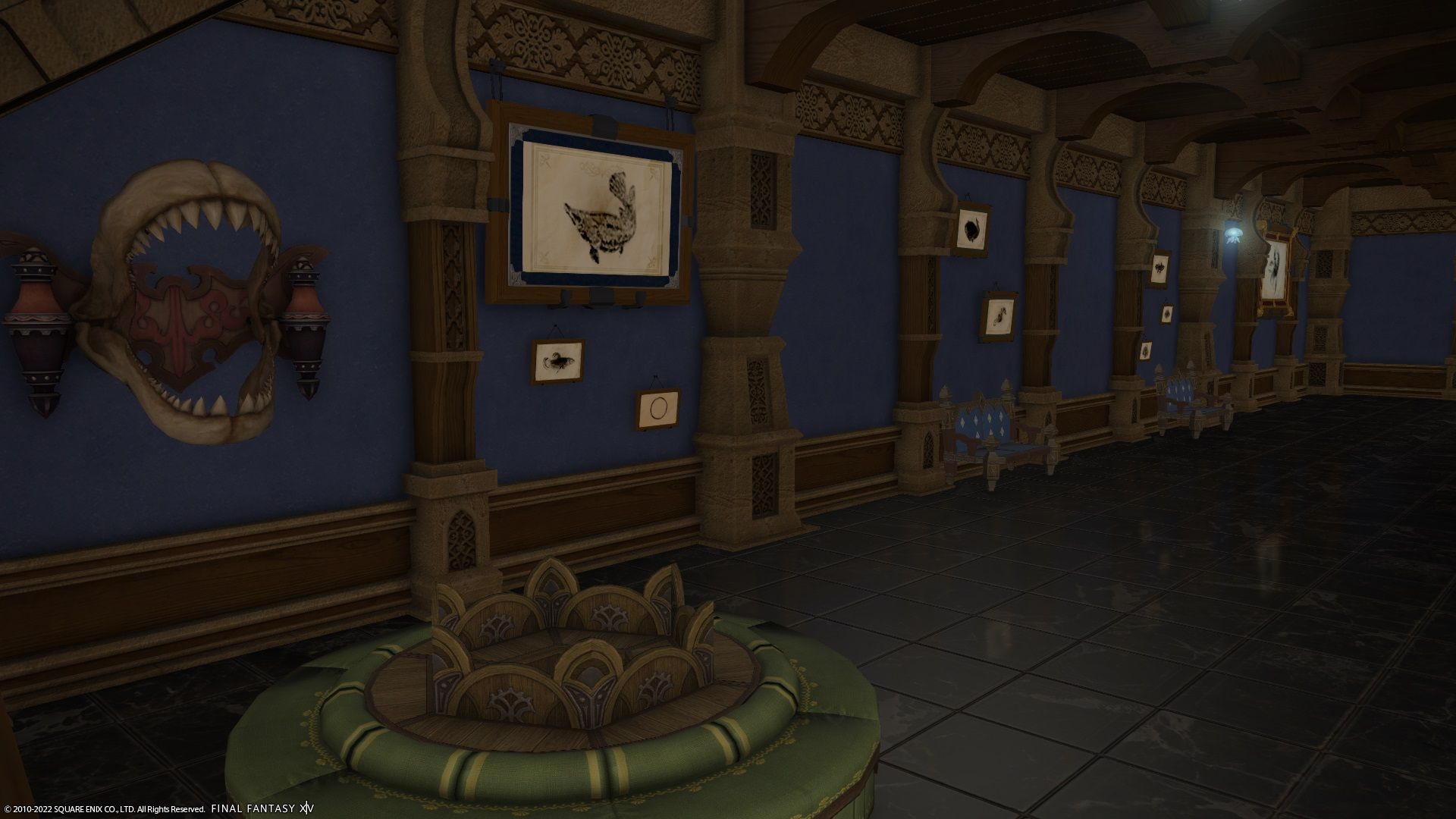 The great thing about the cultural venues that Fruity is championing is that they help to raise awareness about some of the game’s lore that players so easily overlook. The aquarium has set rooms dedicated to different areas in the game and the fish that are native to each. At the same time, the idea of a fully-fledged Eorzean Natural History Museum could teach players some of the little-known facts about our favourite virtual world.

“The FF14 team and localization teams put in so much effort and passion into the world and story of Eorzea that it’s a waste not to look into it,” Fruity explains. “There’s a story for everything, and those stories are connected and referenced. It’s only in the past few months I’ve started really digging into the lore of the world, and just when you thought you’ve hit the end of a storyline, there’s something else to provide more of it in some random sidequest in the Crystarium or Outer La Noscea. By giving a chance for that lore to be surfaced in thematic ways – like in museums – it just makes it that much easier for people to see it and be exposed to it and hopefully appreciate it.”

There are currently four active museum projects that Fruity and the Eorzean Aquarium team are helping with, most of which will be on Diabolos. Fruity also encourages players to visit the Japanese Data Centers, which are also home to plenty of inspiring museum venues. 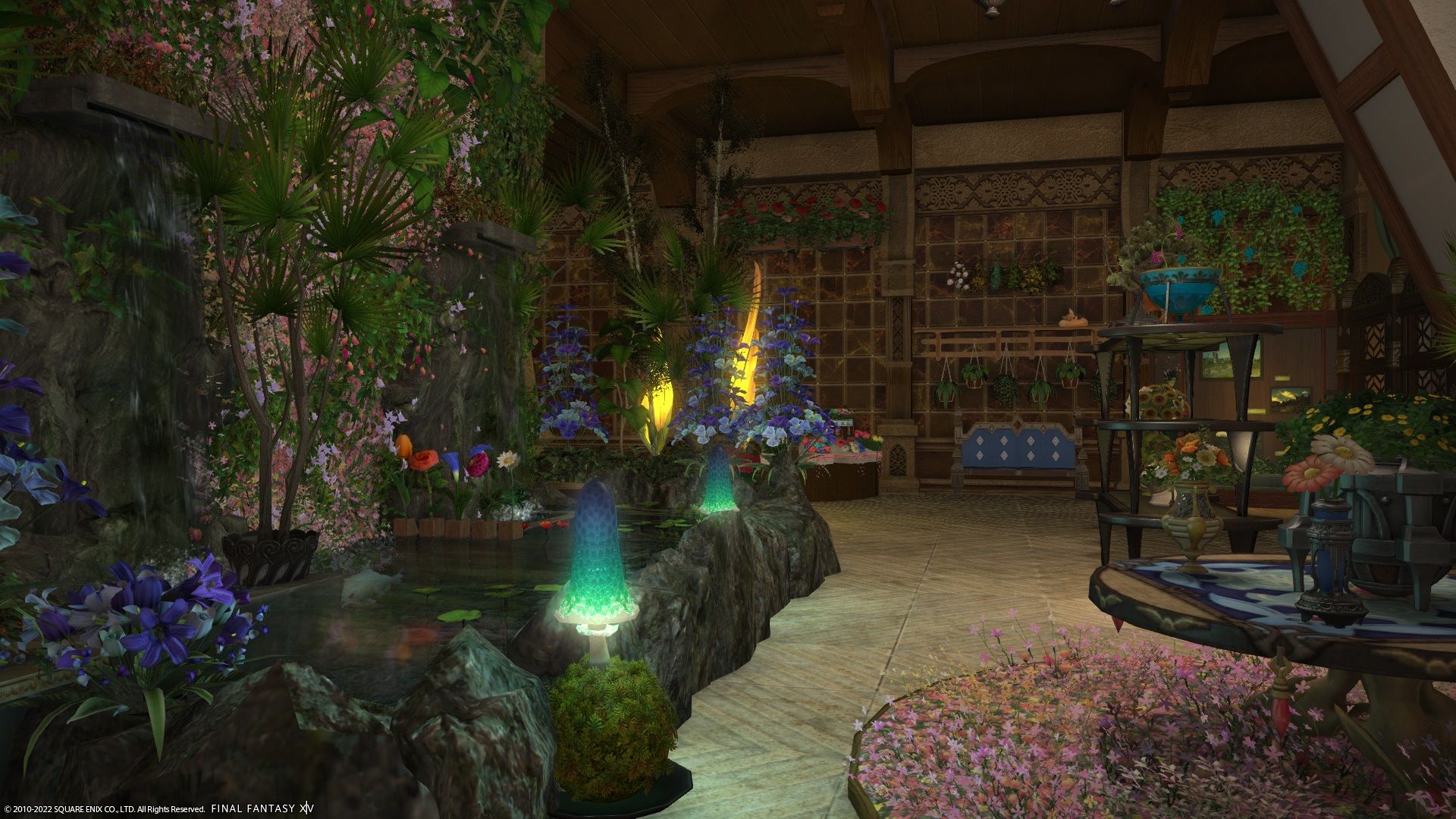 “The big thing that I’m leading now is a project we’re calling FishFest,” Fruity says. “During Lunar Con in July, a lot of people were interested in all the fishing panels we were doing, and LunarCon attendees started joking about FishCon. The joke’s on them, I had already started planning and thinking about FishCon well before LunarCon, and now it’s finally coming to fruition. We’ll be doing a two-day event devoted to fish, fishing, fish-themed things across all of Crystal. It’s really going to be a festival of fish for any player to come and enjoy. There will be something for everyone. FishFest will be happening early next year with more information and dates in a few months.

“Beyond that – maybe I’ll build a planetarium and do planetarium shows. I wanted to do that for the Nature Museum, but the game systems don’t support what I want right now, so it’s back to the drawing board. Maybe that’ll be part of a larger, more expansive Natural History Museum – who knows!”

You can follow Fruity on Twitter for the latest updates on any projects he’s working on. Don’t forget to visit the Nature Museum and Eorzean Aquarium, which are always open!

Warner Bros. Games Is No Longer For Sale

PlayStation Has Filed A Patent For Adaptive AI