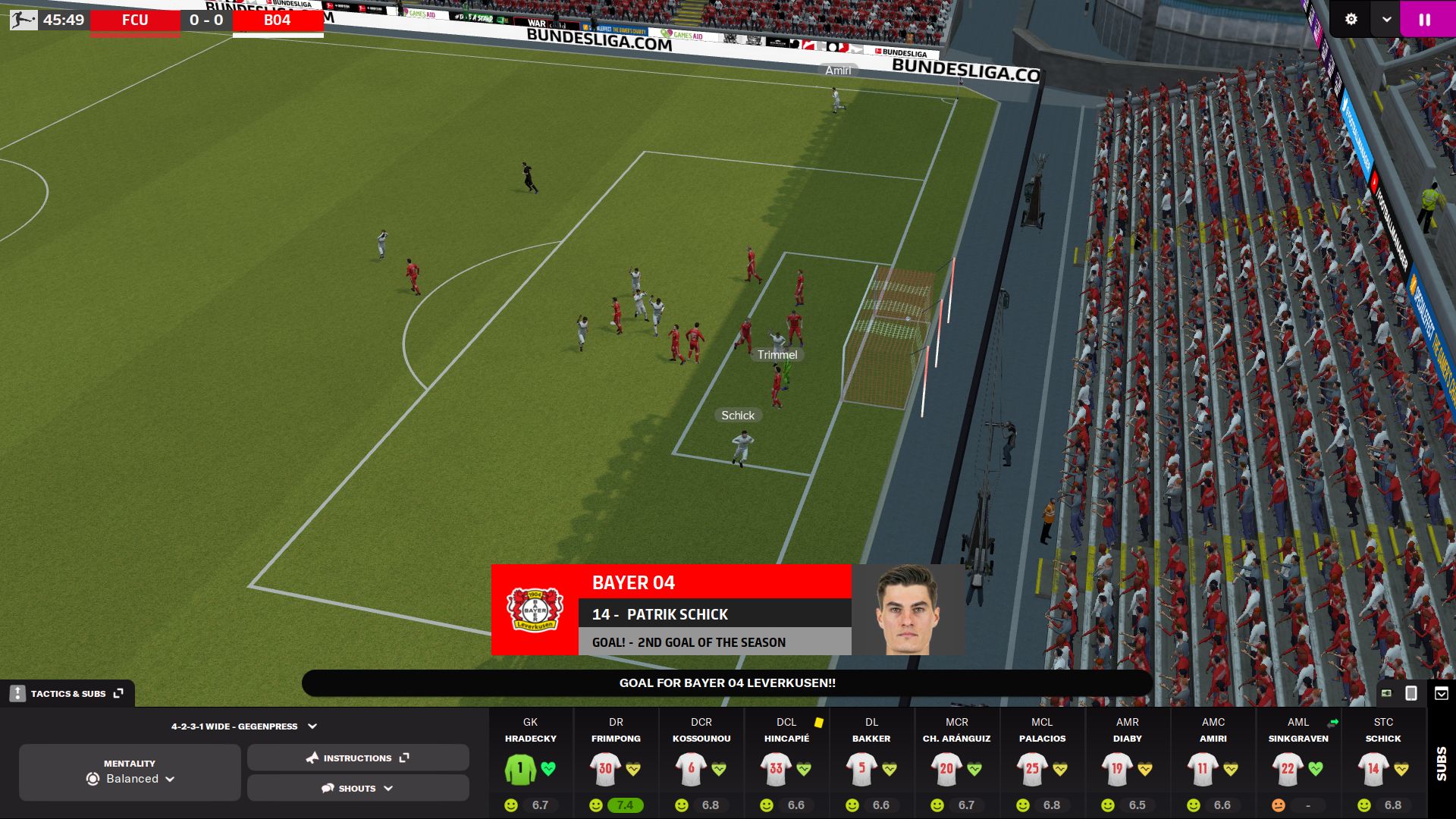 It’s fair to say that making a video game during the pandemic is not an easy task. It’s also fair to say that we’ve used the pandemic as a caveat for many of our reviews in the last 18 months and although we’re not sure when it might be officially retired, now feels like a good time to view new games through a different lens.

Releasing an annual sports game is tough and last year was acknowledged as one of the hardest on record. But putting the pandemic, which many agree was superbly navigated by developer Sports Interactive, to one side, generating buzz around a game that, broadly speaking, has the same purpose, same mechanics, the same look, and the same goals, requires a level of creativity and dedication to the craft that few studios can match.

Speaking to the team at Sports Interactive, it’s clear the changes that were forced upon the company during the pandemic led to an evolution in workplace culture that has had a significant impact on the development of Football Manager 2022.

Working in ‘feature pods’ this time around meant the developers were able to move between different areas of the game, bringing expertise to features that might have become a bit stale. Nic Madden, senior producer for the match engine, this year spent time on the Data Hub (more on that later), and speaks of the company ‘arriving a bit later to the agile party’, but that this helped ‘break down barriers’ and meant the whole team worked as one on multiple features.

It’s undeniable that the last couple of years have been commercially successful for the games industry, even as the process of developing games became harder than ever. Some adapted well and some studios struggled. And though last year was a success story for Miles Jacobson and his Sports Interactive team, the grind never stops when it comes to yearly titles.

Particularly when almost every metric of success was obliterated by Football Manager 2021 sales. In January 2021, it hit 1 million activations, a new record, and one that came with a scarcely believable retention rate of 900,000 active users. By August, the title had sold its 2 millionth copy, and by September it had seen over 1 billion goals scored, 446 million matches played and over 8 million seasons completed.

Numbers are a huge part of Football Manager. Almost everything you do has a numerical signal attached to it and although that might not be to every football fan’s taste it’s interesting to see how real world football is becoming more data driven, seen through the rise of metrics like expected goals and the universal uptake of data scientists working within clubs.

It’s something that gets the cogs turning for CJ Ramson, QA lead for match AI who told us that whilst the aim is to make Football Manager as realistic as possible, balance is required. As he put it: ‘For the Man United vs. Liverpool game, one of my Man United mates said ‘I would have saved and reloaded Football Manager at half time, there’s no way I’m having this’.’

Aspiring to find a blend of realism with unpredictability, that separates football from every other sport, feels like an impossible pursuit. It is though, as the Sports Interactive team put it, what drives them on year after year.

Much of what is added to Football Manager comes from a yearly wishlist on the Sports Interactive forums. This acts as a launchpad for each iteration of the series and can range from total rewrites of things like press conferences and onboarding new playable leagues to something as simple as adding rainbow flags to the 3D match engine’s stadiums (something they have implemented this year).

‘The number of requests from the forums alone really drives the development of the game. As an example, this year a feature was included in FM22 from 14 years ago – that’s the level of attention that is dedicated to the contributions from fans of the series.’

Some features can take years to be implemented, however. The new animations in Football Manager 2022, along with overhauling the team pressing triggers in the match engine, have taken three years to come to fruition. Such a key component of modern football had fallen behind the times and needed to be dragged into the modern world, but now it’s something the team are justifiably delighted with.

One of the big ticket features this year is the Data Hub. For those of you who love diving under the hood and studying numbers, this is as layered an approach to statistical modelling in football as has ever been seen – in fact it makes this Football Manager the most stat heavy so far. Whether this is a good or bad thing is up to you but it runs in line with real world adoption of stats and drives home the thirst for in-game immersion we’ve heard so much about.

This won’t be for everyone. In many ways that’s the beauty of a game, so full of depth and layers you can play and manage your team to whichever style suits you. You might find press conferences boring and send your assistant out to meet the press each week but you can pore over your xG and distance covered per 90 stats until you’ve gone cross-eyed.

There’s also a pocket of Football Manager players (estimated to be around 10% of the current player base) who still persist with the top-down, bird’s-eye 2D view for their matchday presentation (including this writer). For those of a certain vintage it transports you back to mid 2000s Football Managers but this year might tempt that 10% to 3D modelling. With it, games feel more responsive, with smoother transitions and more accurate ball trajectories.

Compare this to the charming but blocky movement we’re accustomed to since switching to 3D and you appreciate the progress being made. It’s still not quite there though and the prospect of watching your games in an engine akin to something like FIFA feels like a long way off, but Sports Interactive aren’t standing still and that’s why people keep coming back.

For the uninitiated there is a Football Manager sub-culture obsessed with regens (the newly created made-up players that appear in your academy year) that might well be some of the most influential fans on the forums. For this group a new feature like the Data Hub is probably not overly exciting, whilst the reworked youth intake preview screen is the stuff of dreams. It’s a tiny change, and only a visual one, but getting a graded ranking of your incoming prospect whets the appetite like nothing before it.

As we worked our way through the seasons in the beta, one thing became clear with Sports Interactive themselves – there is an insatiable quest towards perfection. They know that cannot be achieved but maintaining such high standards across so many disciplines has led to breakthroughs year after year.

Whilst it takes hours and hours for most Football Manager players to notice the smaller details, the real reason most gamers flock to the game is to right the wrongs of real life. If your team is floundering, a session of Football Manager can make it all feel better.

Managing Newcastle United and their endless pot of gold will be a popular choice this year, fans of the Toon Army or otherwise, and that taps into what makes the game great. Superstars pitching up somewhere you’d never even dreamt you’d see them. And that’s what makes immersion so vital to the success of Football Manager.

Football is data driven, so Football Manager 2022 has to be. Staff meetings don’t happen over emails, they happen in an office, so that happens in the game too. The transfer window is full of nonsense, rumours, and agents flogging clients for whatever they can get. So that is in Football Manager 2022 as well.

Why suspend reality when you can create a game so true to life that people are willingly spending months and months of time in your world?

There are of course elements of Football Manager that even the brightest minds struggle to energise. For all the work around press conferences and more contextual questions and answers, and introducing body language options last year, speaking to the media remains unspeakably dull.

Media duties are an enormous part of the modern game of football but that doesn’t prevent them being about as interesting as paint drying. If there is an obvious answer to this conundrum we’d provide one but press conferences are inherently dull processes. In many ways you have to applaud Football Manager for so accurately recreating them and finding thousands of new lines of text to at least make them feel fresh.

Training is another area that fans see and know very little of and whether intentional or not, that remains the case in Football Manager. It’s another essential component of running a football club but, just like press conferences, feels ready for an overhaul.

If you zero in on the most important aspects of managing a football team, Football Manager 2022 has nailed it. Transfers are much more accessible and you have a far greater feel for what it would take to complete a signing, whilst the greater role given to player agents adds immersion too. Transfer deadline day is now much more in line with the frantic and chaotic scenes we grew up watching on Sky Sports News and it really feels like a great deal can be struck with time running out.

Matchdays are as detailed as ever and the aforementioned animations give the game a greater sense of realism, whilst the little touches around stadiums and in the dressing room make your club really begin to feel like your club. Reworking staff meetings turned out to be a real bonus – you now have the opportunity to meet your coaching team in one big meeting room.

And that’s not even touching on the various user interface enhancements, the quality of life additions and just how smooth and crisp the game feels. It’s come a long way from the bland colour schemes the series was founded on and the sluggish processing speeds that led to floods of complaints on the forums all those years ago.

Ultimately, the evolution of Football Manager hinges on that word ‘immersion’. The Sports Interactive team’s mission is to make a game that makes you leave this world and live in theirs and with every passing year they achieve that. Pre-orders for Football Manager 2022 have already eclipsed last year’s numbers, suggesting fans of the series continue to buy into this journey. Which is amazing really, now that the world has reopened and people can go outside and do things other than play Football Manager.

Football Manager 2022, more than any entry that has come before it, feels so true to living the life of an actual manager, that after playing for a while you’ll be sprucing up your CV and applying for real-life managerial vacancies. And everything we have heard about the studio’s future plans suggest we’ll be saying something similar next year.

In Short: Sports Interactive have done it again. The match engine roars into the modern era with significant and overdue AI tweaks, and whilst there are still some stale features the game feels deeper and easier to navigate than ever.

Cons: The elephant in the room is still press conferences and training, two of the most dull (but necessary) features in the game.

Doctor Strange Will Be In Spider-Man 3