“Let’s get started by building a furnace,” says the little goo-creature, pickaxe slung casually over its shoulder. And I feel it’s at this point I should warn you: Don’t listen. Don’t mine the rocks and don’t construct them into a furnace. Flee from the goo-creature as if the devil’s at your heels.

For if you don’t, if you construct that furnace, you will find yourself blinking blearily at the sunlight starting to stream through your window, and you will look at the clock in disbelief, and you will swear and think “I really have to go to bed.” And then you will continue harvesting rocks, because the siren song of Forager is powerful, and you are weak.

Forager borrows from so many genres it’s hard to summarize succinctly. I’ve tried, and I’ve rewritten this intro about a dozen times now, but describing one aspect invariably shortchanges another and trying to encapsulate the whole at once is impossible. Why? Because the reason Forager works, the reason it’s so addictive, is that every time you think you’ve seen everything it adds a new element—until 15 or 20 hours in it doesn’t, at which point the spell is broken. 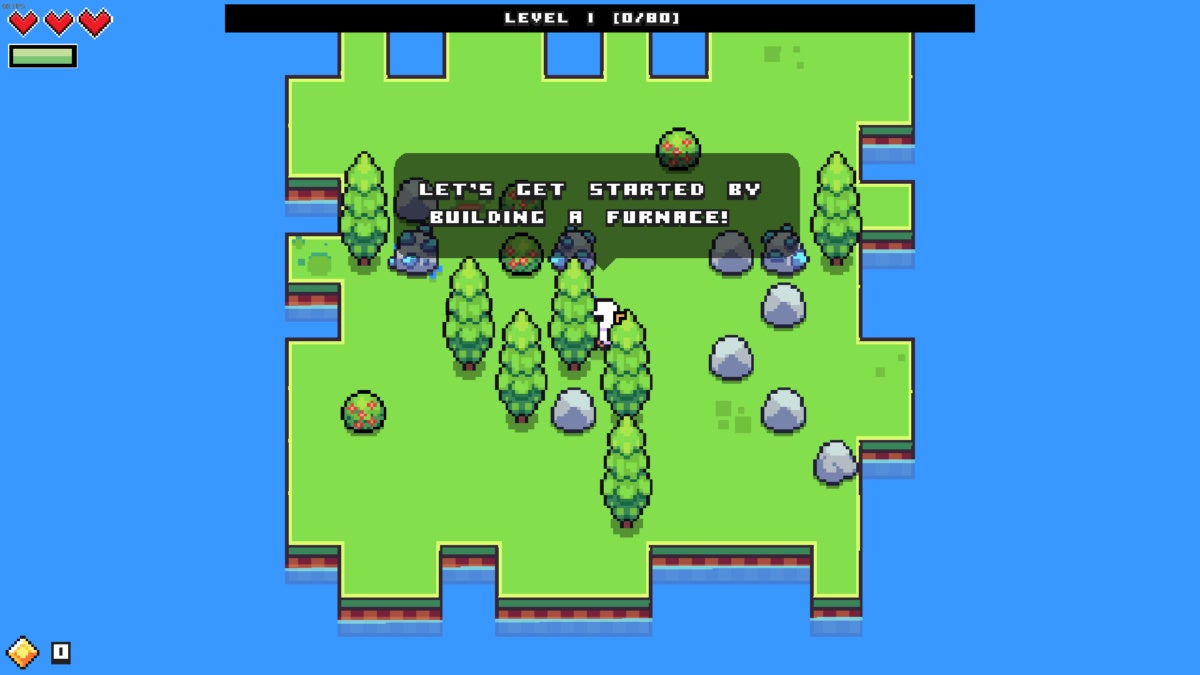 It starts like any of a million post-Minecraft games: On an island, dotted with rocks and trees. You harvest stone to build a furnace, then use the furnace to refine stone into bricks, use the bricks to construct a forge, use the forge to create a better pickaxe that harvests stone faster, and so forth. It’s a familiar loop.

But there are two catches. First off, you gain experience for each resource you harvest. Mine an ore deposit? Chop down a tree? It all contributes to the omnipresent bar at the top of your screen, charting the progress to your next level. Leveling allows you to purchase entirely new skills, which are split into four main categories: Industry, Economy, Magic, and Foraging.

Some upgrades are straightforward, bolstering how many resources you harvest. The majority add entire new loops to Forager though, stacking system upon system, an ever-increasing number of plates for the player to keep spinning. 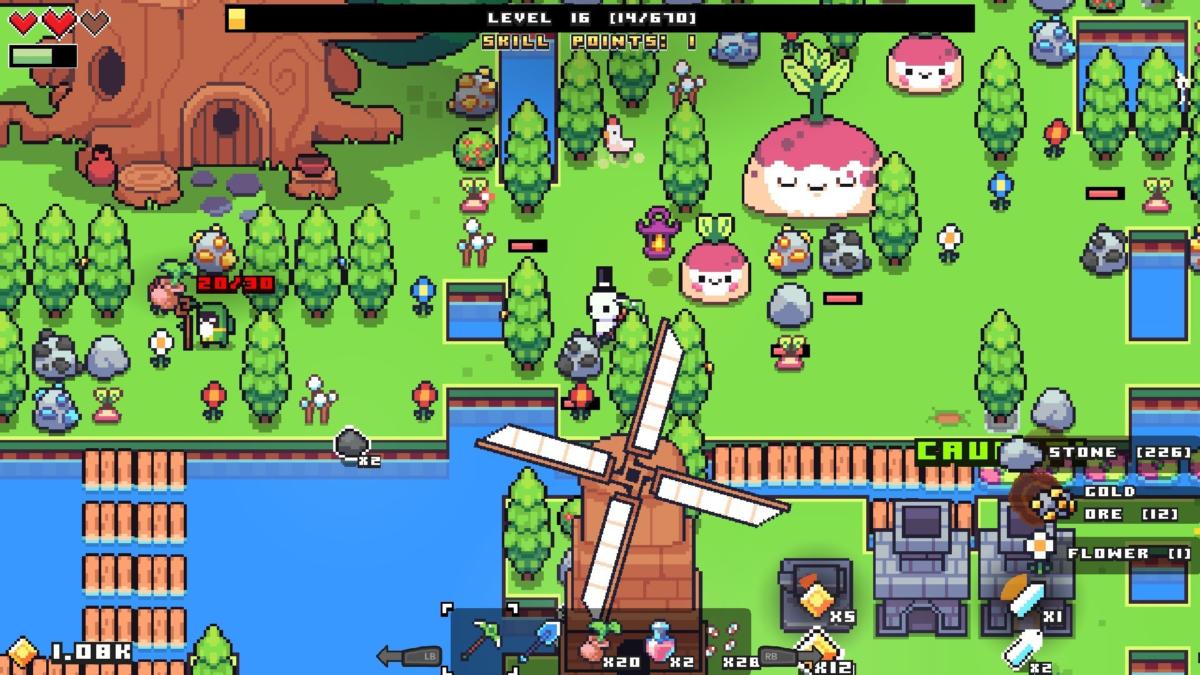 Which leads us to catch number two: Forager self-describes as an “idle game that you want to actively keep playing,” which is fairly apt. Everything is on timers, both seen and unseen. Resources appear on the island at a steady rate, so you never run out. Mined the last iron deposit? Wait 10 seconds and a new one will probably appear in some random spot. Rarer materials are less predictable, and early on the major bottlenecks are simple items like cotton, which takes a while to grow but is essential for clothing upgrades.

The solution’s to simply dump more time into Forager, either actively or not. Leave the game running, go grab a snack, and when you come back the island will be covered in rocks and trees and chickens to harvest. There you go: An idle game you want (or have) to keep playing.

And over time, the idle game aspect ramps up to the point it takes over large amounts of busywork. Forager keeps adding plates for the player to keep spinning, but it’s also excellent at automating certain plates as you go.

Starting out, your only means of accumulating coins is refining gold ore into gold ingots in a furnace, then ingots into coins at a forge. But eventually in the Economy branch of the skill tree you’ll unlock Banks, buildings that automatically generate coins at a fixed rate—and generate coins faster if you place them next to each other. Now it’s an idle game. 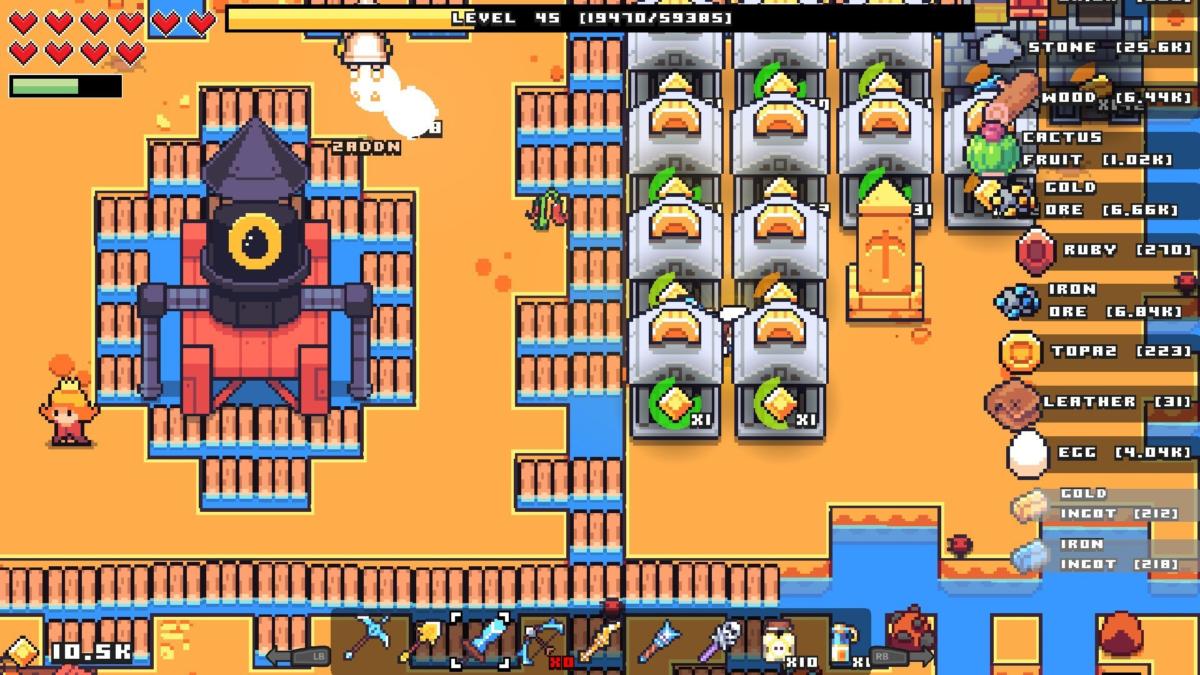 Active to passive. That’s the hook in Forager. And I don’t mean to imply that Forager’s stumbled on some magic formula here. This progression is a fixture of the survival-crafting genre as well, a la Subnautica, and has an offshoot in games like Factorio and Satisfactory.

It’s great at rationing its power fantasy as well. With few exceptions, the skills you unlock upon leveling often change Forager in fundamental ways. And since you can level in any order, this ends up shaping your game over time. I ignored the “Magic” quadrant for hours, only to find out that you can use scrolls to speed up how often specific resources appear, which explained why I was stuck hunting for Nightshade for so damn long. Meanwhile I was stockpiling coins like a gooey Jeff Bezos, having gone deep into the Economy quadrant. 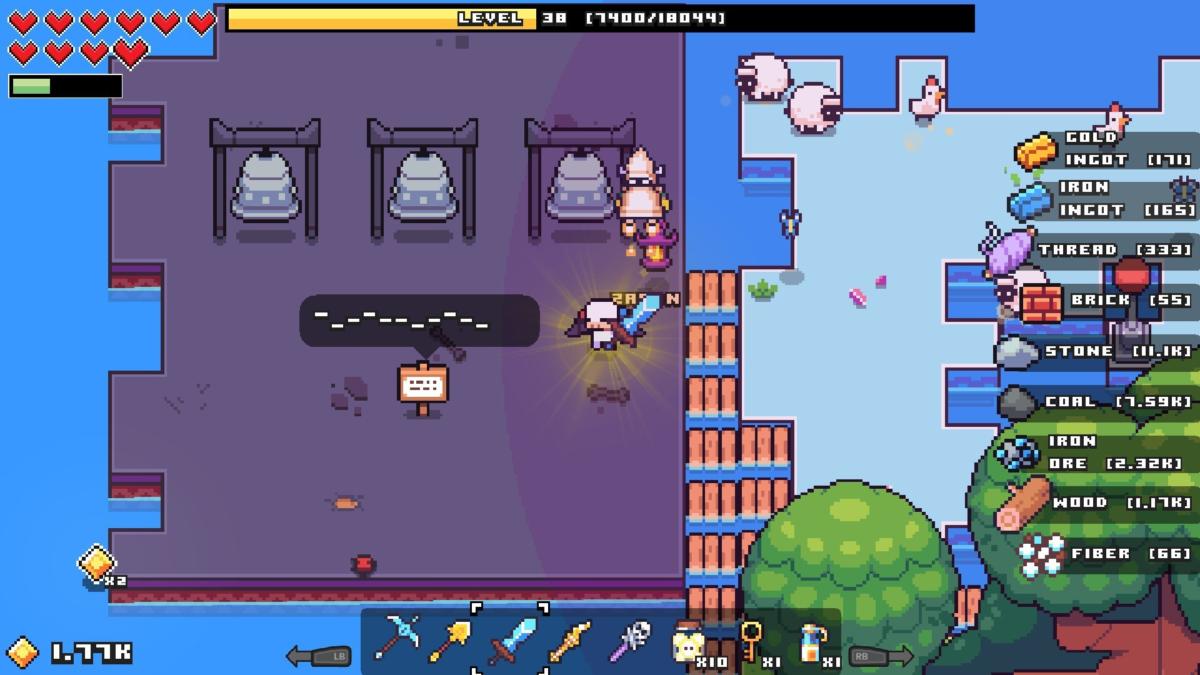 And the real excitement, which I haven’t even discussed yet, is that Forager’s archipelago expands over time. You start on a single small island as I said, but you use coins to buy new islands, eventually acquiring 49 in total.

Islands span five different biomes—Grass, Desert, Winter, Graveyard, and Fire—each with their own unique resources. This is obviously important as you progress. You might see a recipe call for “Demon Horns” for instance, and only hours later realize you had to reach the Fire biome to actually see demons.

But islands are also one-of-a-kind, each with a unique gimmick of some kind. There’s an old druid for instance who wants tree saplings, and a princess who requests flowers. There are also short environmental puzzles, bells that need to be rung in the right order or spikes that need to be avoided. A few even have full-blown Zelda-like dungeons, complete with boss enemies at the end. 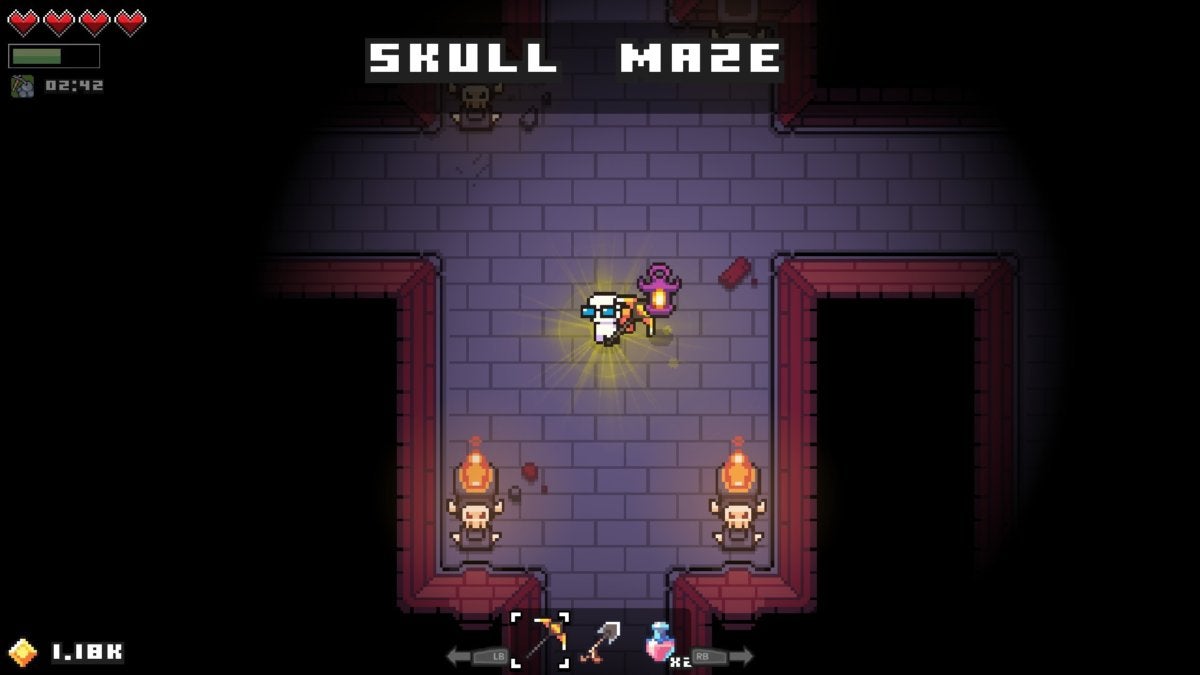 I played until I’d unlocked every skill and finished every island, because that’s what really keeps you engaged in Forager. Those two elements combined. For 15 or 20 hours there’s the promise of something new, a secret to uncover if you just spend a few more minutes mindlessly harvesting resources or waiting for your banks to mint more coins.

Then it’s over, and you stop—and you’re left with this emptiness, this feeling of “What did it all mean?”

The answer of course is nothing. Forager is junk food. It’s so nakedly a game about filling up bars, truly an idle game that does its damnedest to keep you minimally engaged. And I’m not entirely sure how I feel about it, now it’s finished. Did I have fun? Or did I just feel compelled to keep playing, victim to my own baser instincts? I honestly couldn’t say.

It’s a weird feeling, that compulsion. And again, not one that’s unique to Forager. With Civilization we joke about “One More Turn,” and I’ve felt similarly unsettled at times coming up for air after Cities: Skylines or Universal Paperclips or even bloated story-driven games like Assassin’s Creed. Hell, it’s percolated into other mediums, when we talk about binging Netflix shows. There’s something disturbing, realizing how easily entertainment can manipulate us.

Forager simply does away with any pretense. It’s incredibly successful at what it does, and by that judgment I’d recommend it. That said, I was relieved when I finally hit max level and the bonds broke. I Alt-F4ed and uninstalled it.