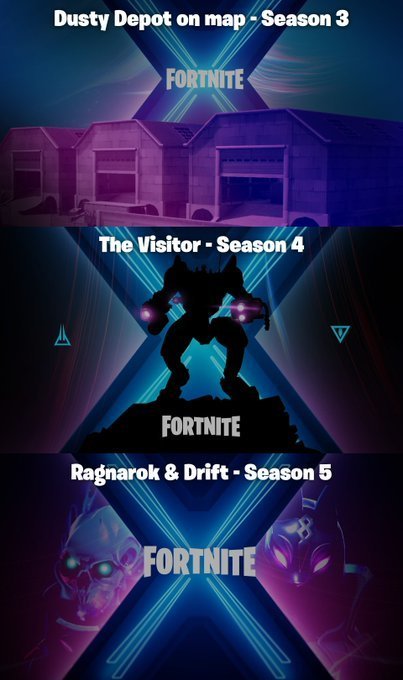 It’s also worth carefully considering what each poster teased in the caption.

The first teaser poster was telling players to “think back”, illustrated by the Dusty Depot location that was wiped out at the start of Season 4 by the meteor.

Then the second teaser teased that players should “look forward”, but somewhat strangely also contained a logo that looks like the exact same insignia on the shoulder pad of the Visitor skin, also from Season 4.

As if that wasn’t confusing enough, the most recent teaser poster, released yesterday, simply said “twist time” and appeared to show, what we think, could be alternative skins for two of the more popular skins in seasons gone past.

As alluded to, there doesn’t seem to be any cohesive theme forming, other than, something time travel-related and that’s just too mind bendingly complicated to try and think about.

I mean did you watch Avengers Endgame? It’s that, ten-fold.

If it wasn’t confusing enough, Fornite’s worldwide creative director at Epic Games, Donald Mustard, has changed his Twitter location (commonly changed to reflect and tease some big in-game event) to a series of digits.

What any of this could mean is quite simply, anyone’s guess.

But with Fortnite Season 10 set to get underway tomorrow, one hopes that today’s final Twitter teaser poster helps bring together all these complicated theories and clues into something more explainable.

Tune in at 3pm BST for the last Teaser reveal and hopefully a few more answers to those all-important questions.