Home » News » Genshin Impact: How To Defeat The Perilous Trail

The story is one of the major attractions in Genshin Impact and Perilous Trail is a part of it. The quest dropped in the Version 2.7 update, and it unveils many hidden secrets about The Chasm, which was also a very anticipated area ever since the start of the game since it had its name etched on the map but no one could get there until Version 2.6.

As revealed in the version trailer, the quest involves Xiao, Yelan, Yanfei, and to everyone's surprise, Arataki Itto and Kuki Shinobu! It takes you to a secret domain where you work alongside all of these characters to find out more about what happened in the great battle 500 years ago. It's one of the most emotional quests in the game.

How To Unlock Perilous Trail 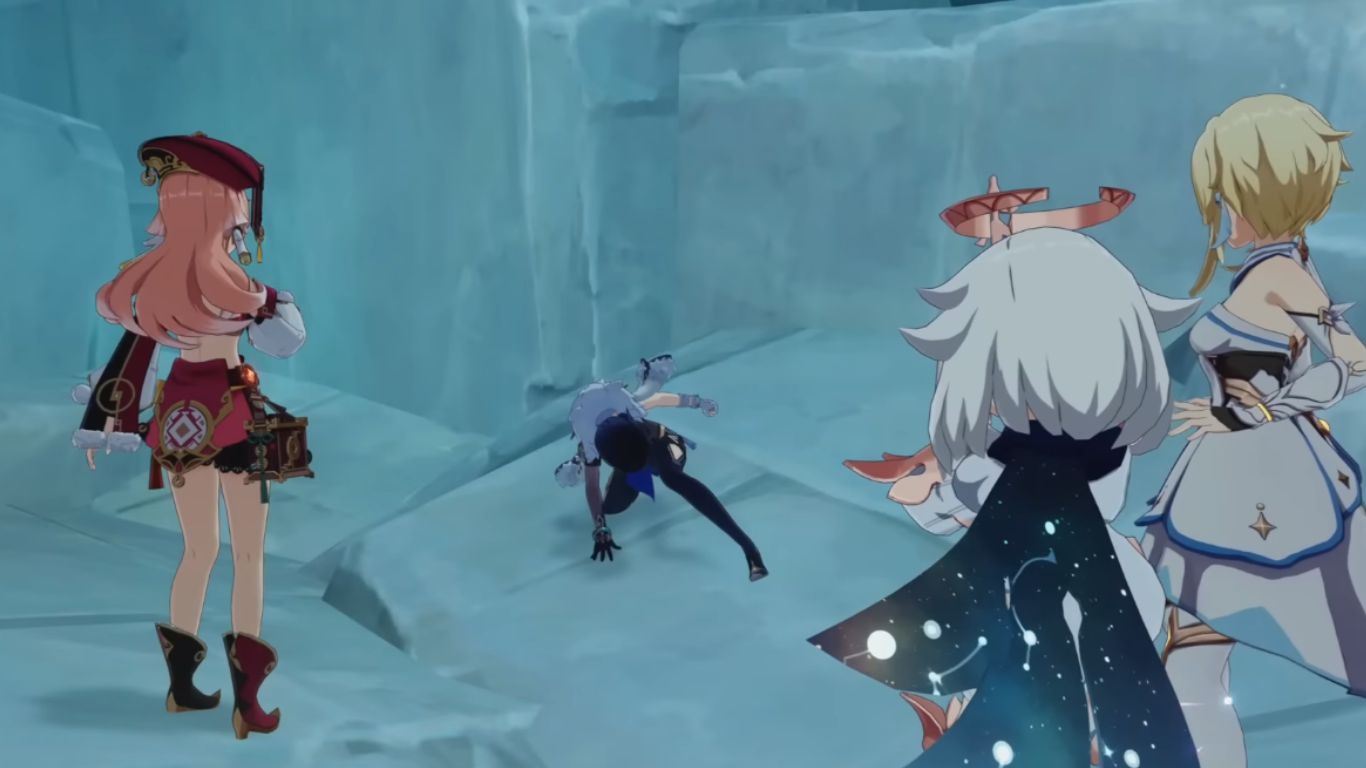 Perilous Trail is a part of the 'Interlude Chapter' section in the Archon Quests. To unlock this, Travelers will need to finish Chapter I – Act III of the Archon Quest. However, the story quest of Arataki Itto and the second story quest of Raiden Shogun are also required, which means that you need to finish the archon quests in Inazuma as well. Finally, the main world quest in Chasm 'Wherefore Did the Spiritstone Descend?' needs to be completed to unlock the Perilous Trail.

As this is one of the Archon Quests and contains a bunch of secrets about the world of Teyvat and the great war 500 years ago, this guide will avoid as many spoilers as possible so that players can enjoy the full experience while doing the quest with a little help for the puzzles in it. It's a unique quest surrounded by different domains that contain particularly challenging puzzles. 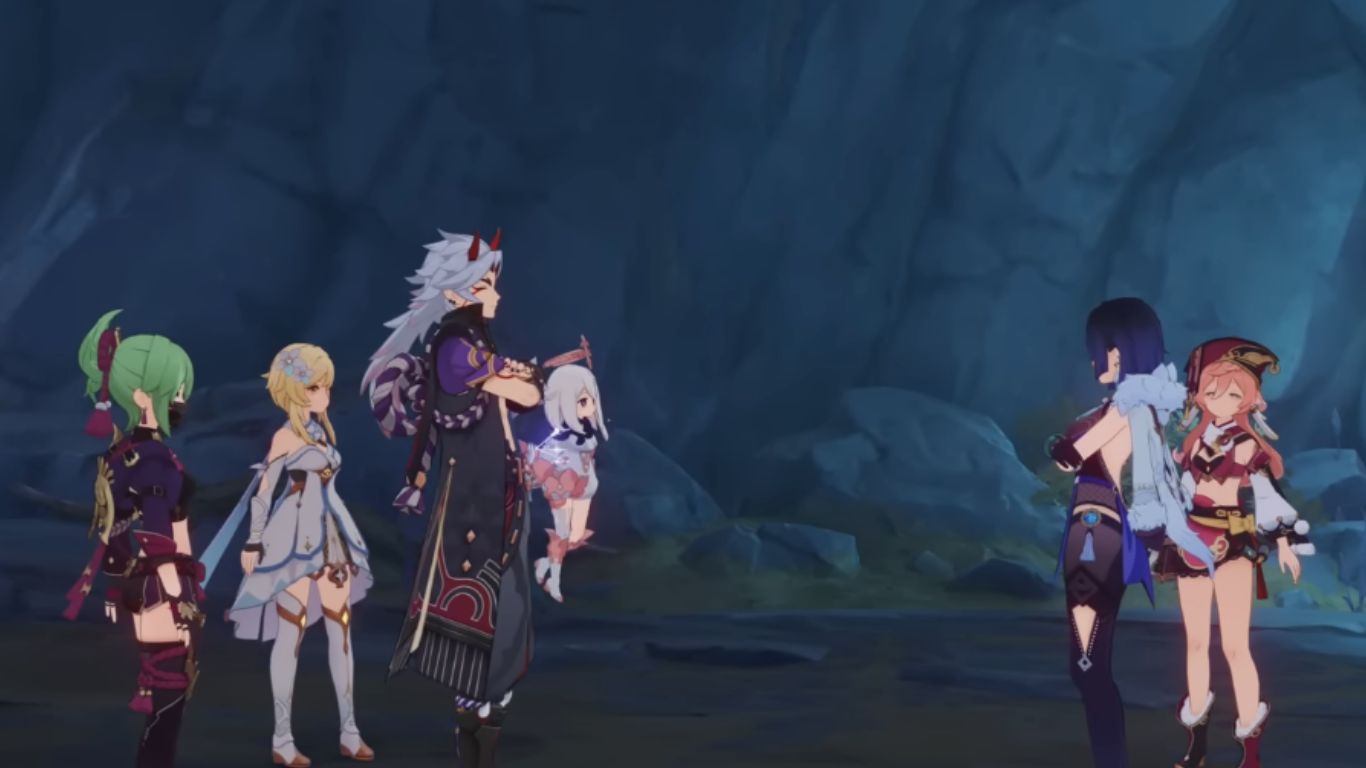 As soon as you start the quest, the game will ask you to head deep into the Chasm to meet Yanfei outside the area where you fought the Ruin Serpent in the World Quest. Yanfei will ask you to not tell anyone that she's here, which sounds extremely suspicious at first. Later, you realize that she's just trying to hide from Itto. This part will also introduce you to Kuki Shinobu for the first time.

After lying to Arataki Itto, you will head to the middle of the area to talk to Yanfei. This is where Yelan comes in and Itto also joins after finding out that you lied to him. Itto and Yelan get into a heated argument that makes the Geo character slam the already fragile ground in anger. Without a chance to react, everyone falls into a hole that seems very deep.

After a lot more dialogue, you also meet Xiao for a brief moment outside a domain entrance. This domain looks similar to the domain for the fight with Raiden Shogun in her second story quest. This is the end of the first part of the quest, after which, you're supposed to enter the domain called 'Chamber of Twisted Cranes' in search of an exit. 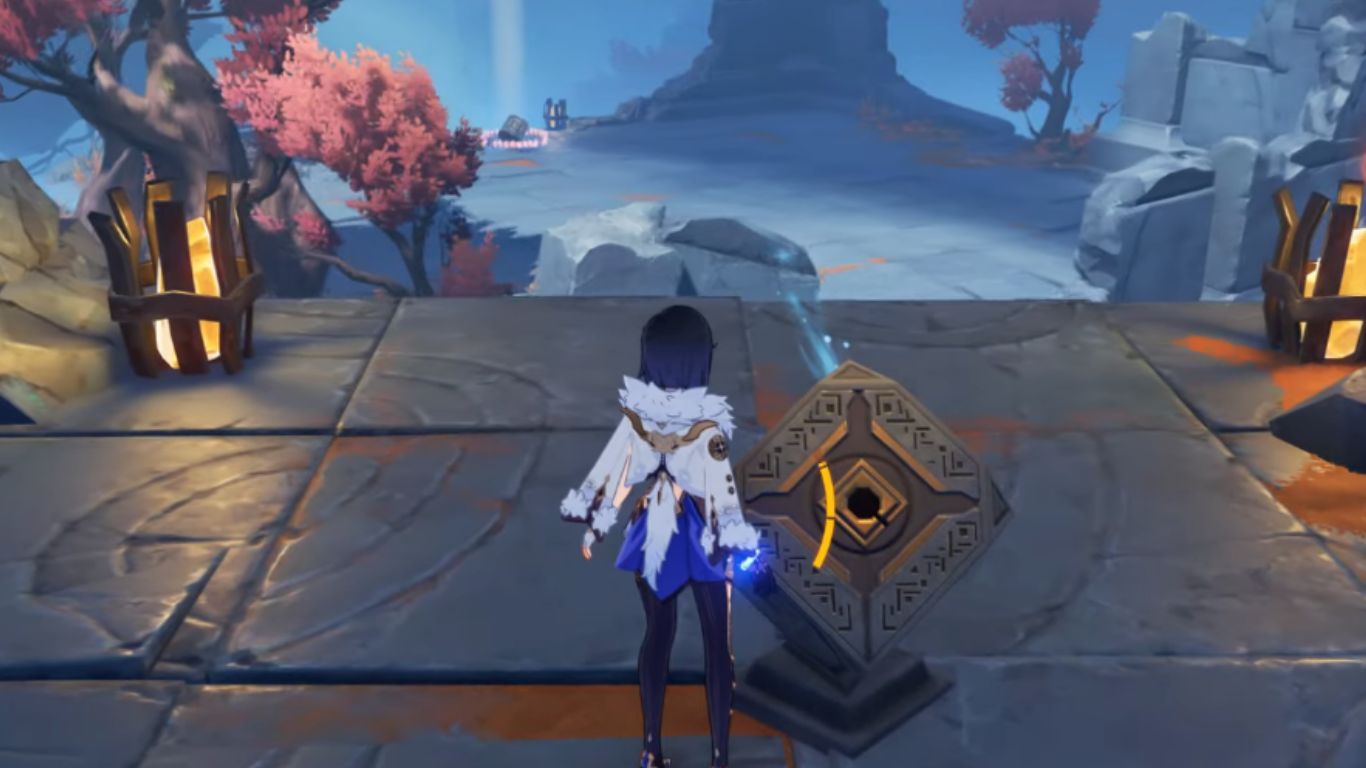 Before entering the domain, you will see the game recommending you to use a Hydro character in it. While there is no requirement to do so, this quest is centered around Yelan, so it would be great if you can pick her or any other Hydro Character to deal with the Pyro enemies.

The domains in Perilous Trail, including this one. feature unique mechanics that are extremely well-designed. As soon as you enter the domain, you will see a mechanism on your right that you can activate to rotate the platform in front. This will open a staircase that is only visible when you get close to it. Head to the next platform and fight the Pyro slimes that spawn.

Upon defeating the enemies, the next mechanism will unlock. Activate it and head to the next platform, and then you will see some Hilichurls to your right. Defeat them and claim the Exquisite Chest that spawns. After that, interact with the mechanism three times. Once you've done this, you will see a similar mechanism on the floor in front of you blocked with a red aura facing you.

Now, head over to the platform where you defeated the slimes and interact with the mechanism there to rotate the platform in front by 180 degrees vertically. Head to the newly opened platform, kill the enemies, activate the mechanism, go to the next platform, and finally defeat two Geovishaps to unlock the exit of the domain.

Upon exiting the domain, you will realize that it didn't actually lead to the exit but back to the place where you started (duh, it wouldn't be that easy now, would it?). After a few dialogues, you will be asked to talk to Itto, Yanfei, and Yelan to finish this part of Perilous Trail. 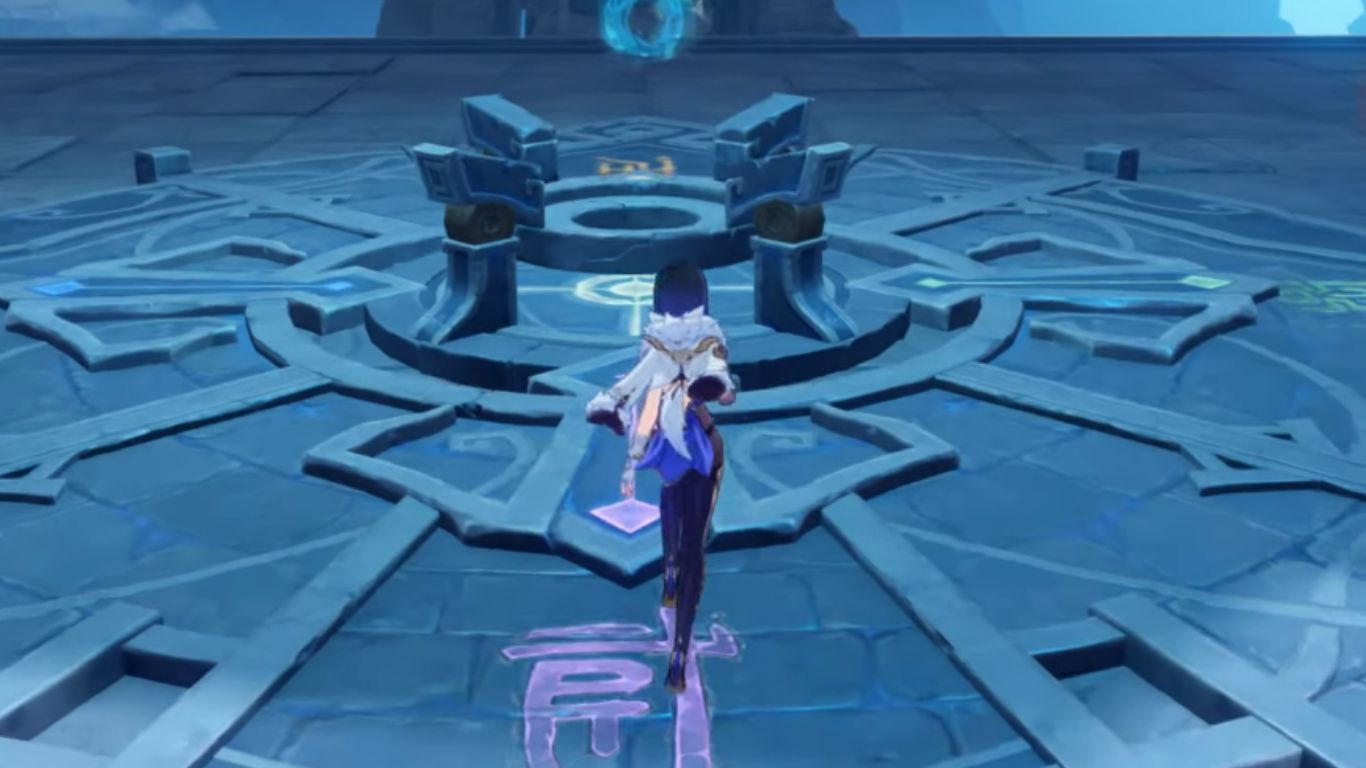 After finishing the first part, you need to skip a day to start the next quest. As soon as you do that, the next cutscene will automatically begin where Yanfei will figure out an important secret about the space you're currently in. Once you talk about the disparity in everyone's comprehension of time, Yelan will join in and say that she might have found something.

Following Yelan will unlock a new portion — enter this to find a new opening for another domain called 'City of Hidden Runes'. The element suggested by the game for this one is Geo (Itto Supremacy). Once you've entered the domain, there will be a big mechanism in the middle of the platform except… you can't do anything with it. All you have to do here is remember the symbols on any one side of the platform.

Once you've done that, interact with the blue vortex in front of where that symbol is facing. You will be taken to the platform perpendicular to it. Here, you have to step on every symbol that looks like the one you just memorized. Once you've stepped on all of them, defeat the enemies that spawn and interact with the lasers in the middle of the platform. 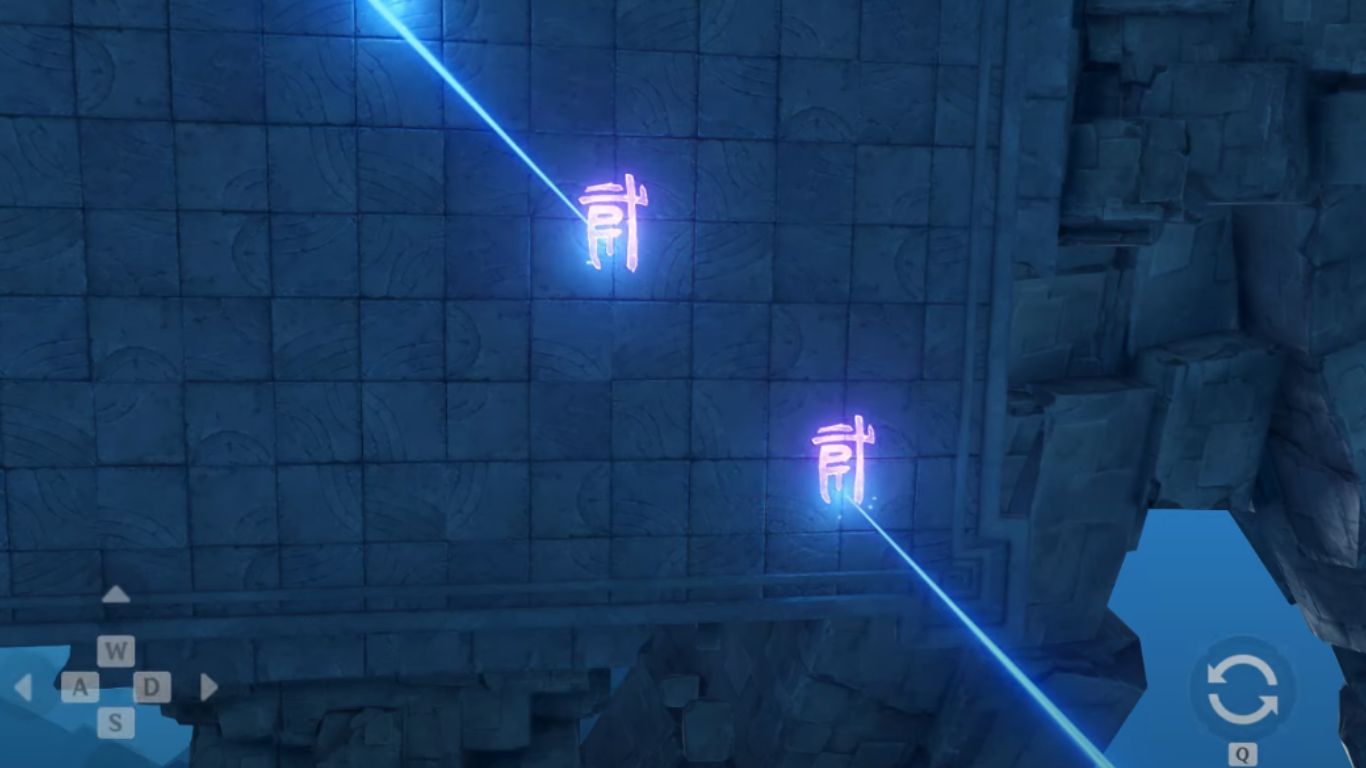 Upon doing so, you will be taken to a screen where you will see four symbols on another platform and a set of two mechanics containing two lasers each. These lasers can be rotated and moved anywhere on the platform, but you can't change the distance between them in any way. All you have to do is set the lasers in a way where they shine upon all four of the symbols, and you're done with a quarter of the puzzle. Repeat the same with all the other platforms.

After finishing all four platforms, you will unlock a hole in the fifth platform which is directly above the first one. Head over to it to trigger a cutscene with more lore and go down the hole once you're done with it. After exiting the domain, you will be greeted with a special door that shows different things depending on the person opening it. When it's the Traveler's turn, you will be taken to another space where you have to interact with another similar hole to go back and meet the rest of the characters again.

After you're done with this area, more secrets will be revealed about the space and Yanfei will also help you find Xiao and bring him to join with the rest of the team for the final part of the quest. Skip another day after finishing this quest to follow up to the End of the Line.

End Of The Line 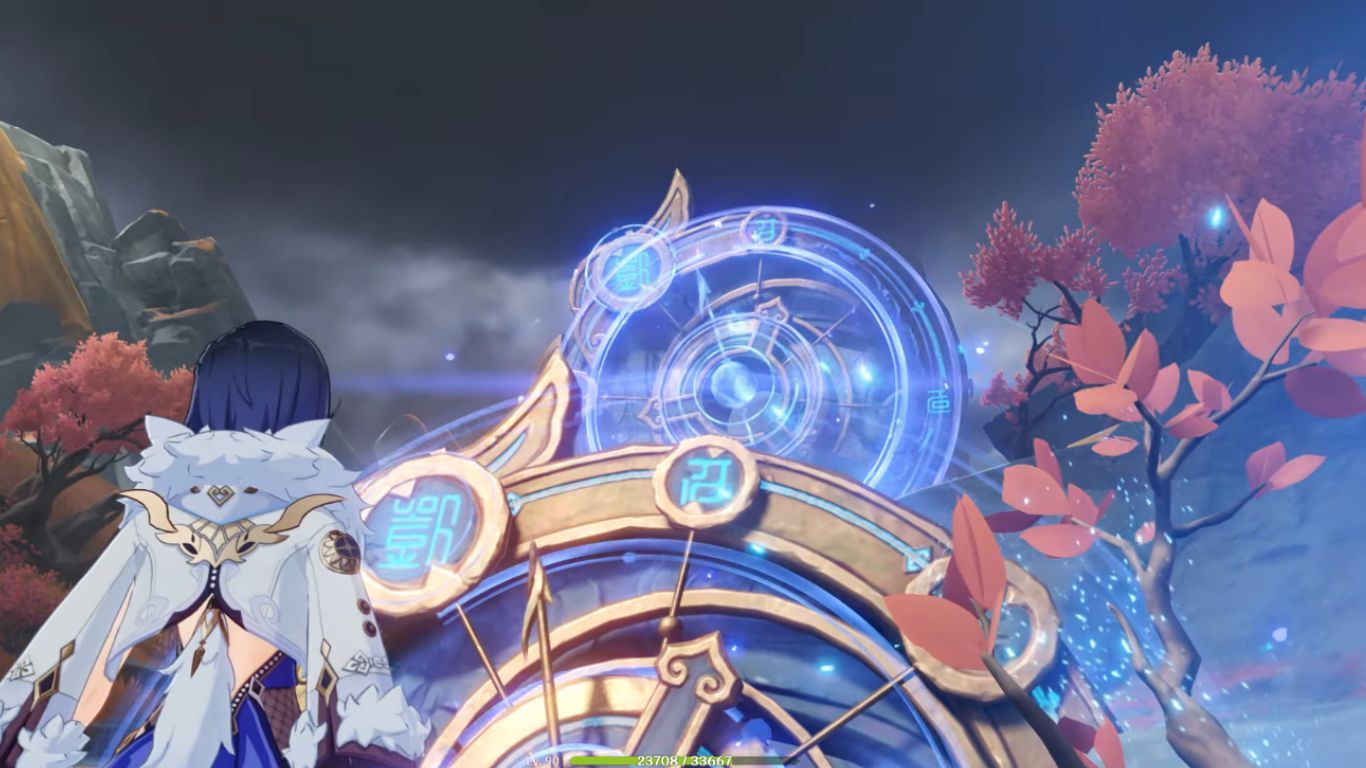 After skipping yet another day, you will begin the final part of the Perilous Trail, and the longest, most puzzling one at that. Start the quest by talking to Xiao and you will learn a few more secrets about the place including the reason for Yelan and Xiao being a part of this story. After a while, both of them will get into a debate because Xiao suggested that he can sacrifice himself for the others.

Arataki Itto shifts the attention to himself to stop the debate and ends up punching the wall again which actually opens a new part inside the space you're in. Head over to the new area and enter the Realm of Snaring Illusions domain where you'll make use of all the knowledge you've gained. Here's how you can beat this final challenge in Perilous Trail.

There are three notes scattered across the platforms with Yanfei's, Yelan's, and Xiao's memory. You instantly find the fourth one when you enter the next platform. Make sure you collect all of these notes as they have quite some lore in them.