Spider-Man: No Way Home is now less than two weeks away from hitting theaters. Everyone attached to the movie has effectively dedicated the last few months of their lives to hiding as much as they can about what might well be the most anticipated movie in MCU history. Sony, Marvel, and Disney went ahead and let everyone know villains from other Spider-Man movies will be returning, such as Doc Ock and Green Goblin, but still won't say anything about other Spider-Men.

Any hint that Tobey Maguire and Andrew Garfield might fight alongside Tom Holland in No Way Home has been jumped on and dissected by Spidey fans. That's why when the Twitter account for The Graham Norton Show tweeted a movie poster for No Way Home showing three Spider-Men as opposed to just Holland, it sent the internet into something of a tailspin.

Holland and Zendaya, who plays MJ in the MCU, were guests on this week's show. The image was shared to advertise their appearance in the same way that a poster for The Witcher's second season was posted to flaunt that Henry Cavill would always be on the show. Whoever picked the three Spidey poster obviously didn't realize the mistake they were making when they hit tweet. 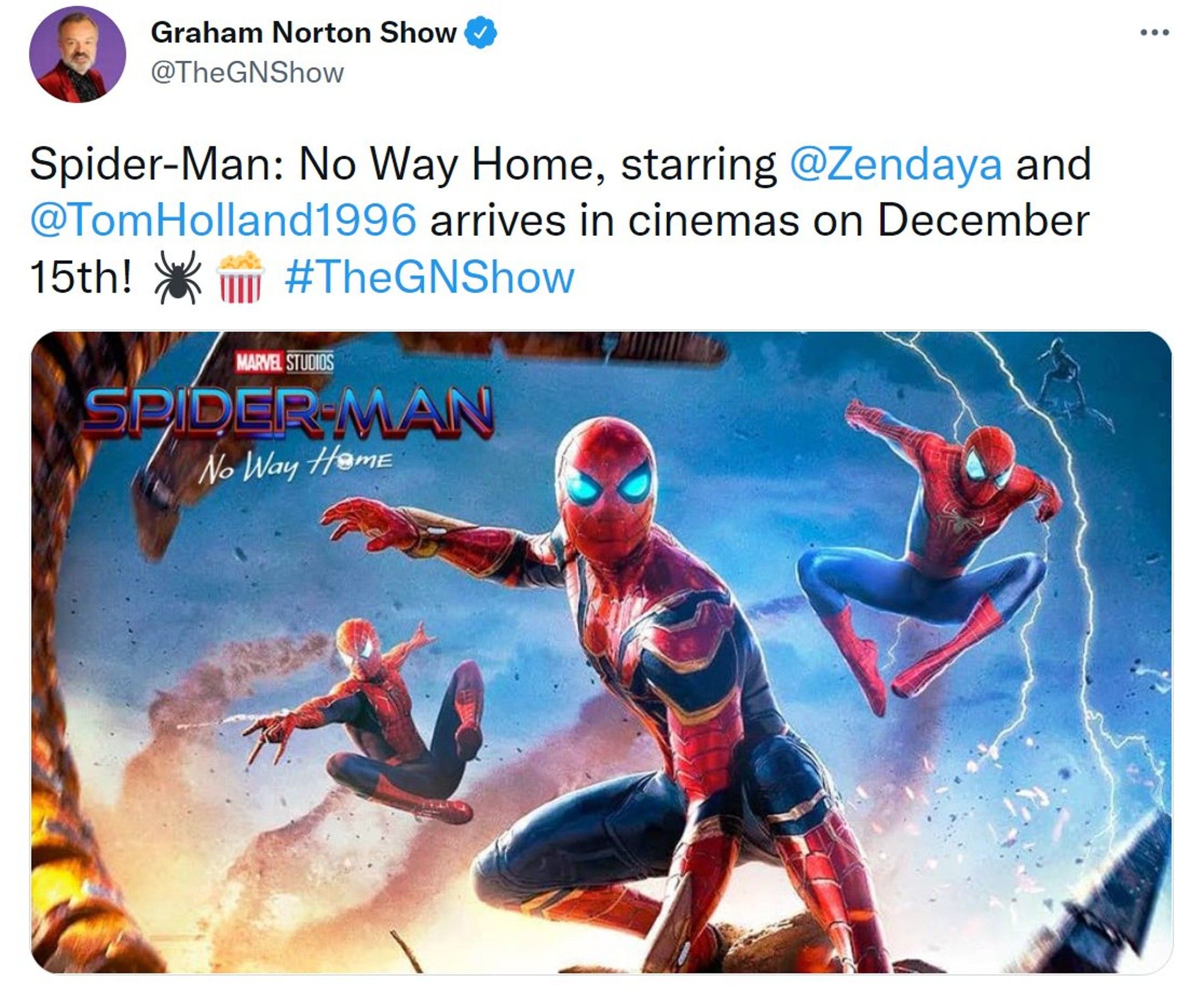 It's not as big a mistake as it seems at first glance, though. Although the tweet has since been deleted, you can check out a screenshot of it above courtesy of Small Screen. It doesn't take much studying to realize the poster in question isn't official. It's a piece of fan art the show's social media manager has seen and thought “that'll do” not knowing the consequences of posting such an image in an official capacity would have.

Maguire and Garfield's Spider-Men have been added to the image. In fact, Maguire's web-slinger doesn't appear to be Maguire at all and is actually a picture of Spider-Man from Insomniac's hit PS4 game. Don't pout too much that this was just another red herring. There was some actual good news for Spider-Man fans to dine out on this weekend. The first trailer for Into The Spider-Verse 2 dropped, revealing its name and that there will be at least one more movie in the series to come after it. Plus only 11 days until No Way Home and we find out whether Garfield and Maguire are in or not. Let's be honest though, they probably are. Otherwise who was punching Lizard in that trailer?