Home » News » Hands-on: Jedi: Fallen Order plays like Uncharted with lightsabers, but we haven't seen enough of it

But I digress. Point is, we saw Jedi: Fallen Order today—first a public EA demonstration, then a slightly longer behind-closed-doors demo. You might as well watch the public demo, which features protagonist Cal Kestis fighting (and sneaking, and clambering) his way through an Imperial base on Kashyyk. It’s about 15 minutes.

Our non-televised demo added a bit to the front of that sequence, wherein Kestis takes over an AT-AT and pilots it down a narrow canyon. I can see why it was cut from the public demo, because it had some significant frame rate issues. There’s plenty of time to polish and optimize—I merely mention it because this demo was also open to the public, and I’m sure someone out there will write a Reddit post about the stuttering.

Anyway, this sequence began with a very Uncharted setpiece, Kestis swimming towards a pair of AT-ATs as they plod along, then scaling the outside of one by way of conveniently placed moss and vines. It’s the least interesting part of Fallen Order to my eyes. I tired of these mechanics halfway through Uncharted 4, maybe earlier, and Fallen Order feels about a decade behind on this trend.

Respawn does draw on its past for some nifty wall-running segments. That said, nothing in the demo looked as inspired as Titanfall 2’s factory level. Maybe it’s just the change from first-person to third-person that makes it feel less fresh? I’m not sure. 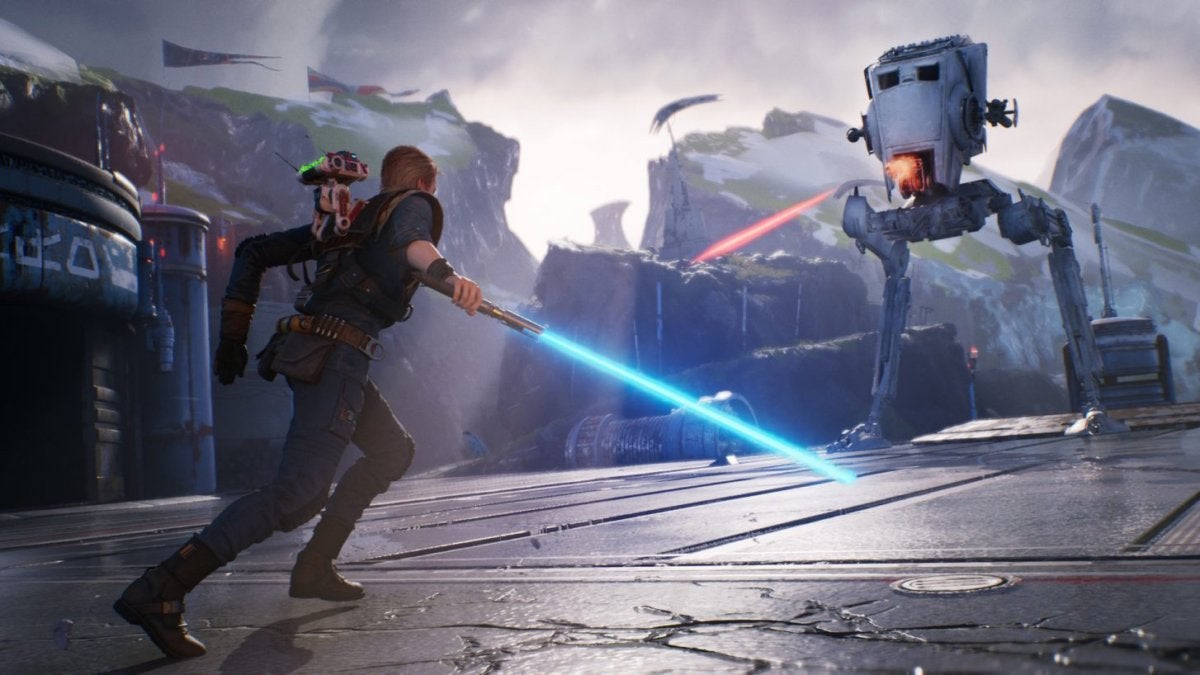 This promo image shows a smaller AT-ST instead of the larger AT-AT vehicles in our behind-doors demo.

Upon summitting the AT-AT, Kestis swings inside and kills a bunch of hapless Scout Troopers. I’ll say this: The behind-closed-doors demo looked a lot more fluid than the public demo. I could’ve imagined it, but it definitely felt like the person playing was better at chaining moves together, mixing up the lightsaber and dodges and various Force powers.

There seems to be a Sekiro-esque “Poise” meter in combat—which is appropriate, given the original Star Wars was inspired by Samurai sword duels. Aside from that it looks a lot like Force Unleashed though. That’s not necessarily a bad thing, but I was surprised how immediately familiar Jedi: Fallen Order looked, as if I’d played some version of it twice before. Fallen Order even packs in those environmental “puzzles” where you use Force Push to knock over a platform, or use your lightsaber to chop through some dangling cables. Square peg, meet square hole.

And our square protagonist Kestis being a bland nothing in both April’s cinematic trailer and today’s demo didn’t help either. He’s easily the least interesting character from what we’ve seen so far. Hell, his little helper droid—which scuttles on and off his back like a crab—has more personality.

The aforementioned AT-AT piloting segment was the weakest part of the package though. It reminded me of Call of Duty’s ill-advised vehicle segments circa Black Ops, either on-rails or so choreographed it might as well be. And long, too. With a narrow view limited to the AT-AT’s cockpit, sitting slightly behind Kestis, we merely marched forward and shot, marched forward and shot, for what felt like an eternity but was probably three or four minutes tops.

Maybe it feels better to play, but it looked boring. The audio was fantastic, explosions reverberating dully off the AT-AT’s chassis and the score swelling at climactic moments. There’s no momentum to it though, nor the sense of impending doom that usually accompanies seeing the AT-ATs from out the outside. From inside, it’s just slow. When it exploded and we finally got back on-foot, I felt relieved.

Not to say the on-foot sections seem incredible. Jedi: Fallen Order hasn’t really hooked me yet—which isn’t to say it looks bad, just “fine.” Given Respawn’s focus on the story, I’m expecting that to be the strongest aspect, the piece that makes me put up with the traversal mechanics and so forth. Or maybe it’ll be the combat, which also looks like it has potential even if it’s a bit too reminiscent of Force Unleashed. And Game Informer published some other intriguing details today, like space travel occurring in real-time rather than cutting to a load screen. That could be cool! 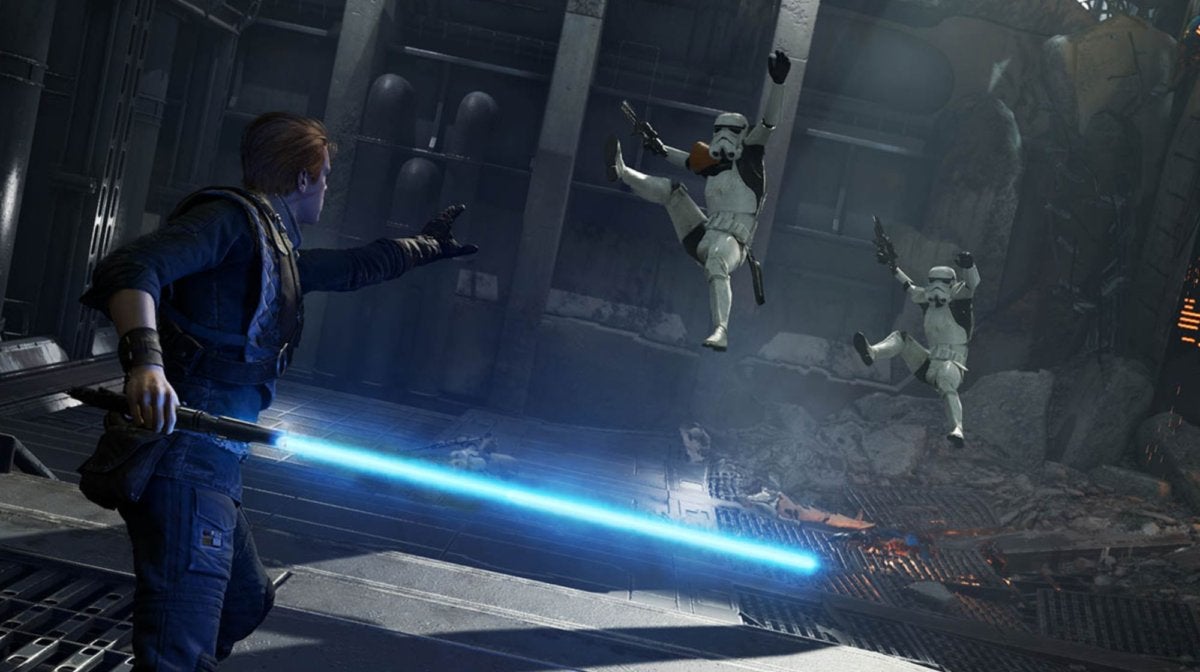 But we didn’t see any of that today, and I can only judge what I’ve seen. In particular, we haven’t seen enough of the story and of Kestis himself. Jedi: Fallen Order hinges on him and his arc, and so far he’s got the charisma of a certain sand-hating Jedi. (It does admittedly get everywhere.)

With Mafia III’s Aaron Contreras listed as lead writer and pinch-hitter support from Chris Avellone, I’ve got high hopes. Forest Whitaker’s presence is promising as well. I can’t tell which way it will go though, and after Star Wars: Battlefront II’s mediocre campaign I don’t want to over-promise—and I thought Janina Gavankar’s performance carried that story. I don’t have faith Kestis can do the same.

We’ll see. I’d certainly love Respawn to have two wins in the same year, cementing their worth for EA lest they be unceremoniously shuttered like so many before. Nothing I’ve seen says Jedi: Fallen Order is in trouble or anything—but nothing screams “One of 2019’s best games” either. It’s likely to sell well either way, because Star Wars, but I’d be pleasantly surprised if it skewed towards the Knights of the Old Republic end of the Star Wars game canon and not the Battlefront II or Kinect Star Wars end.

In any case, this is just the start of E3—or not even, if you take EA’s “We’re not affiliated with E3, we just happen to occur the same weekend” tack at face value. We’ll be bringing you more previews and press conference coverage all week long, so stay tuned.

FIFA 20 DOWN: Server status latest as FUT Birthday is announced