Home » News » Hitman 3: How To Get Silent Assassin, Suit Only On Berlin

On the Berlin level of Hitman 3 the Silent Assassin, Suit Only challenge requires you have to kill at least five of the ICA agents without being compromised, killing anyone else, having any bodies found, and without changing out of your iconic suit. There are a lot of options for attempting this challenge, but this guide will run you through the quickest and easier method to complete it.

You won’t need any shortcuts or special weapons to complete this guide, although it is recommended that you take a silenced pistol with you to destroy some cameras along the route. You’ll also need a throwable object for one of the kills, but there are loads to be found around the level. And don’t worry if you forget, this guide will lead you to a crowbar if you haven’t found anything. 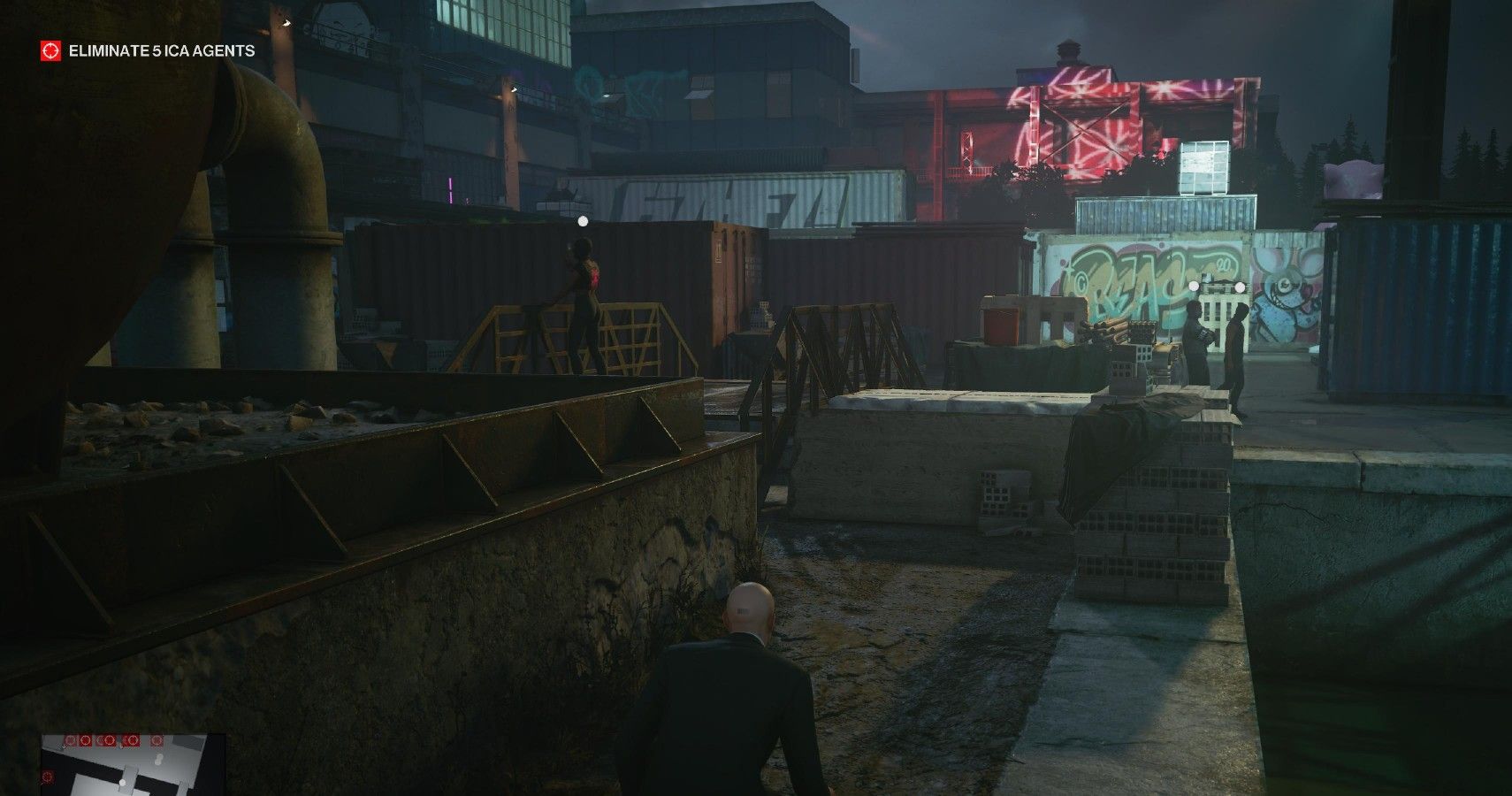 Starting at the radio tower, head down the hill to the club warehouse. Instead of helping the man find his ‘medicine’, hop over the barrier at the far end of the carpark and enter the canals area. You will be trespassing here, so be mindful of everyone milling around. Sneak past the lone smoker on the bridge, looking out for the occasionally patrolling staff member and head towards the shipping containers.

Another smoker paces in front of the door, but you can slip past her and through the window when she has her back turned. From the window, take the white door, then the red door to get deeper into the club. The route is fairly clear and shouldn’t take you past any guards or staff members that might see you. After passing through a shipping container, go through the white door at the top of some steps and you should find some rat poison on the floor near a white chair. Take that and head out the door on the far side to enter the Chill Area of the club. You’ll no longer be trespassing, but there are two ICA agents that overlook this area so be careful.

Head towards the tables near the door to the club proper and look out for an unaccompanied red cup of water. Use the rat poison to spike the drink and then head over the canal bridges towards the toilets. There will be a delivery driver on the phone nearby, but he should be secluded enough for you to subdue him and hide his unconscious body in the nearby box. Pick up his scooter keys then wait by the toilets. 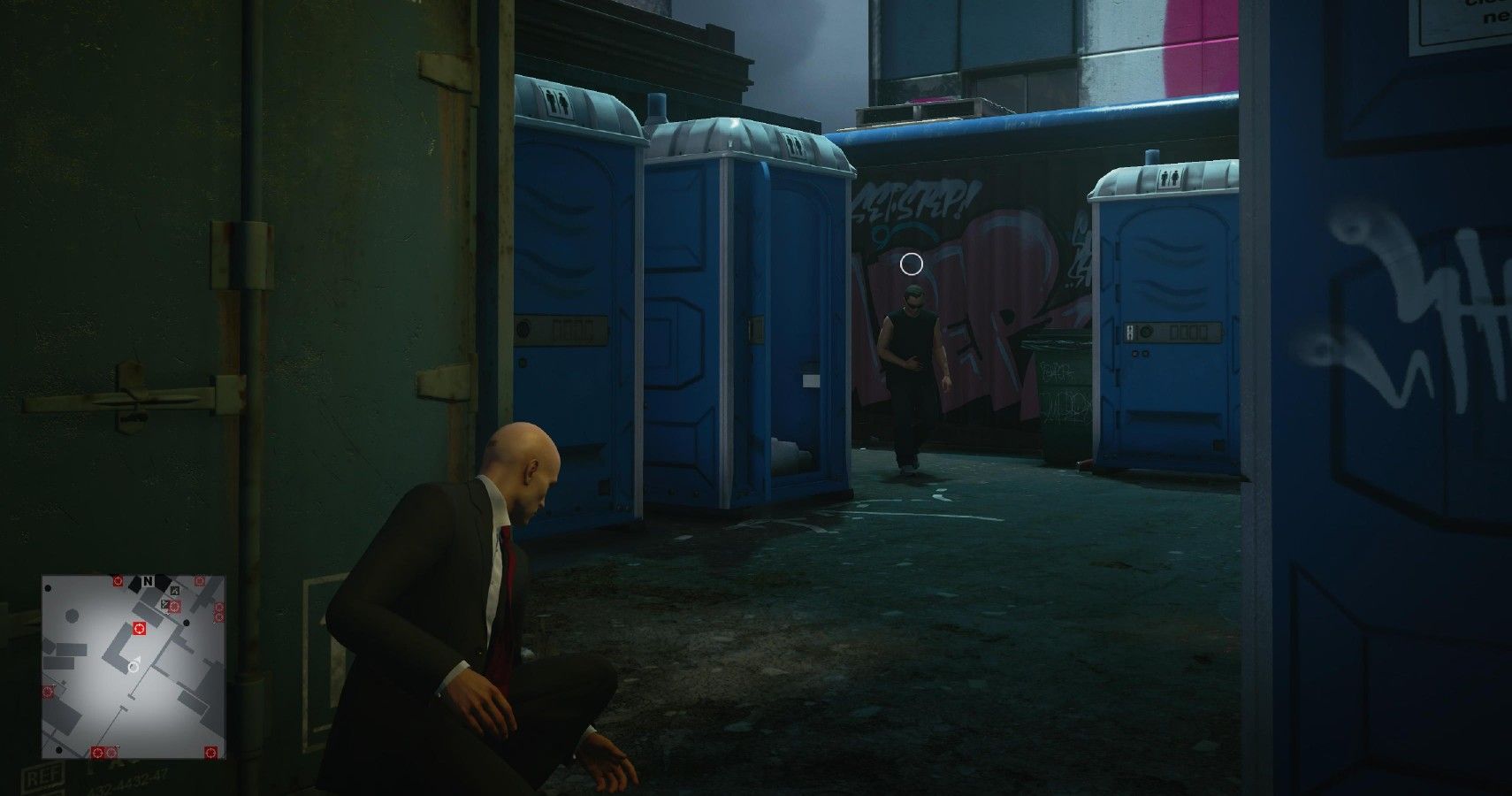 Soon enough Agent Davenport will take a drink from his water then come stumbling over here to throw up. Once his head is down the toilet, feel free to drown him or dispatch him in whatever way you see fit. No one else should come this way, but you can dump his body with the delivery driver just to be safe.

With the first kill down, you’ll want to climb up the shipping container near where the delivery driver was on his phone, then climb up a second one to make it onto the balcony. You’ll be trespassing again as soon as you climb up the first container so be on the look out. Once on the balcony head for the left side door, be careful of the camera overhead. You can disable it with your pistol or avoid its green grid as you enter the door.

On the other side of the door you’ll immediately see a window looking into a small security room with two or three bikers in it. Two of them do small circuits of the room, the third comes and goes, but is actually Agent Rhodes in disguise. Wait for him to lean on the window you’re looking through, and for the other two bikers to look away. When the moment is right, subdue him and you’ll drag him through the window and out of sight. Make sure to grab his weapon if it didn’t come with him so that it doesn’t alert anyone. Snap his neck to finish the second stage of this mission. You can leave his body where it falls, no one should come this way to find it. 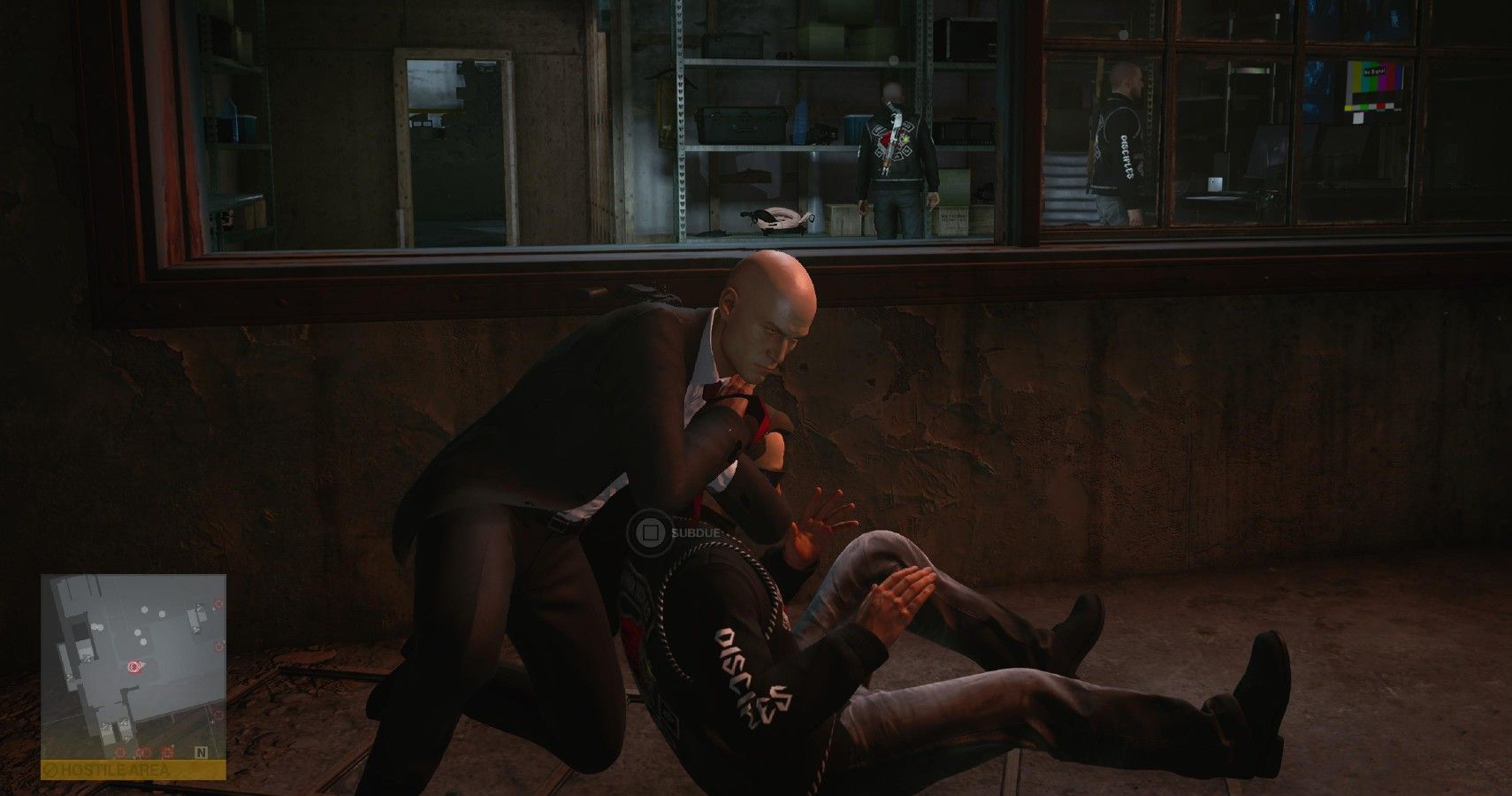 If you act quick enough, you can run straight through the security room while the other bikers are still looking in either direction. If not, wait for another opportunity before silently sneaking through the room and around the corner in the distance.

Follow the corridor around the grow room until you come to a stack of crates, climb up and onto the grow room roof. Be careful of the patrolling biker on the catwalk above, but once he moves past the stairs, you can come up and subdue him without getting spotted. Leave his body here, or drag it around a corner if you’re nervous. 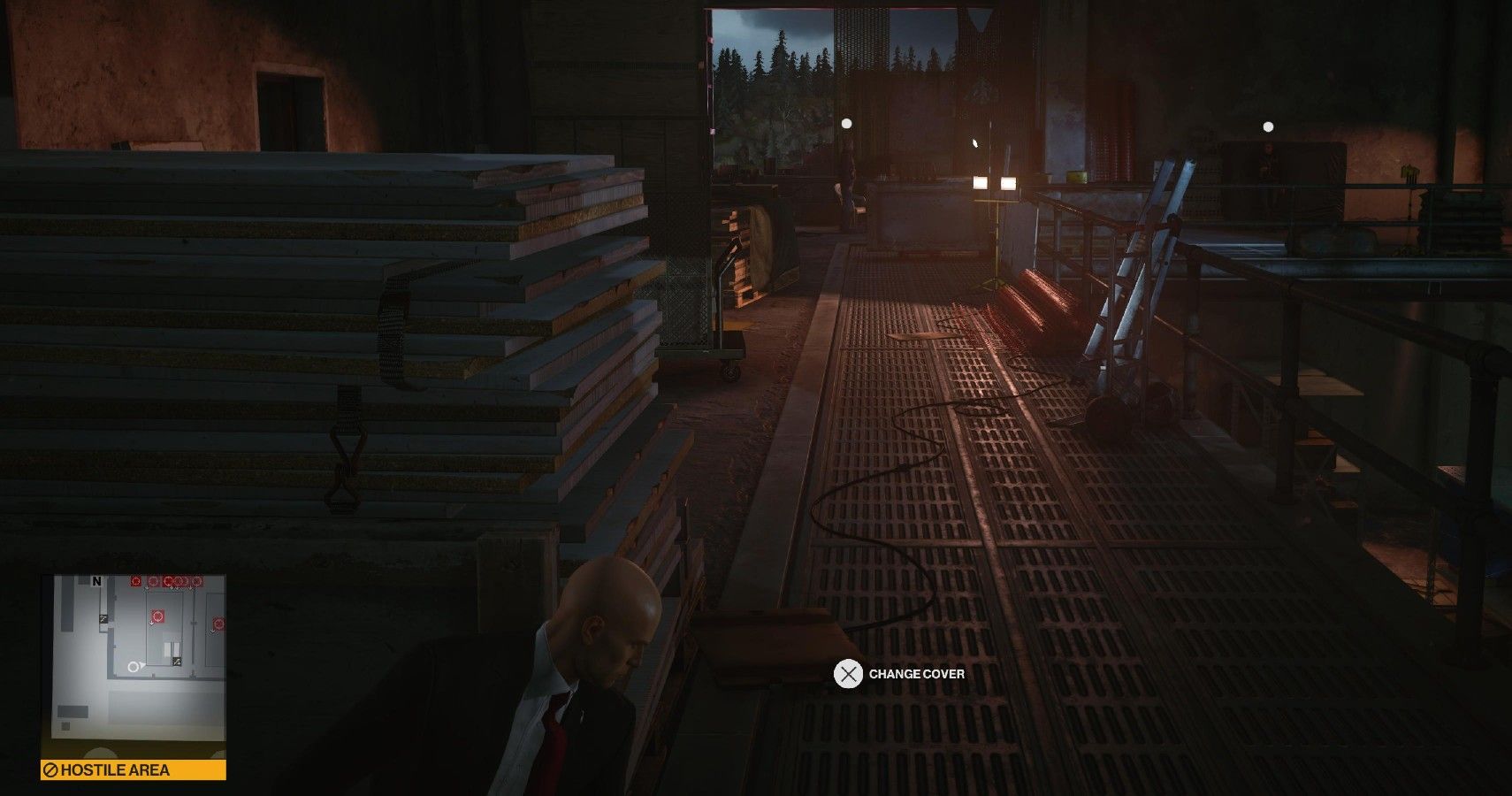 With him taken care of, take the doorway to the left that leads to a generator at the far side of the building. Two bikers will be patrolling near the opposite windows. Wait for one of them to come towards you before turning off the generator. This will cause him to investigate so quickly move back over to the railing to avoid being detected. Once he is fiddling with the generator, subdue him and leave him there. The other biker is in fact Agent Termaine. He will be constantly checking his sniper rifle, but occasionally turn around so be careful when you make the approach to kill him, but there shouldn’t be any other witness left to worry about.

With three dead you’re over halfway there, and the last two are nice and easy. Now is also a good time to pick up a throwable object if you haven’t already. Head back the way you came, and down the stairs onto the grow room roof again. Drop down next to the stairs, making sure to stay out of sight of the camera, and grab the crowbar lying on the table. Follow the corridor around the grow room again to climb back onto the roof and onto the catwalk again.

Looking away from Termaine and his sniper rifle you should see a small window that leads to another room, climb through and you’ll be near the top of a long staircase. Use the skybridge to head over to the club rooftop and take a left. Around the corner you should see a smoker leaning against a wall. If there isn’t anyone around use the throwable object to knock him out. You can hide his body around the corner you came, or in the nearby stairwell. Agent Green patrols this area, and soon enough he should be leaning on the barrier near where the smoke was. Kill him however you want but do not push him over the ledge, as the body will be discovered before you can leave. Although no one else should find the body, there are plenty of hiding spaces around if you want to tuck it away. 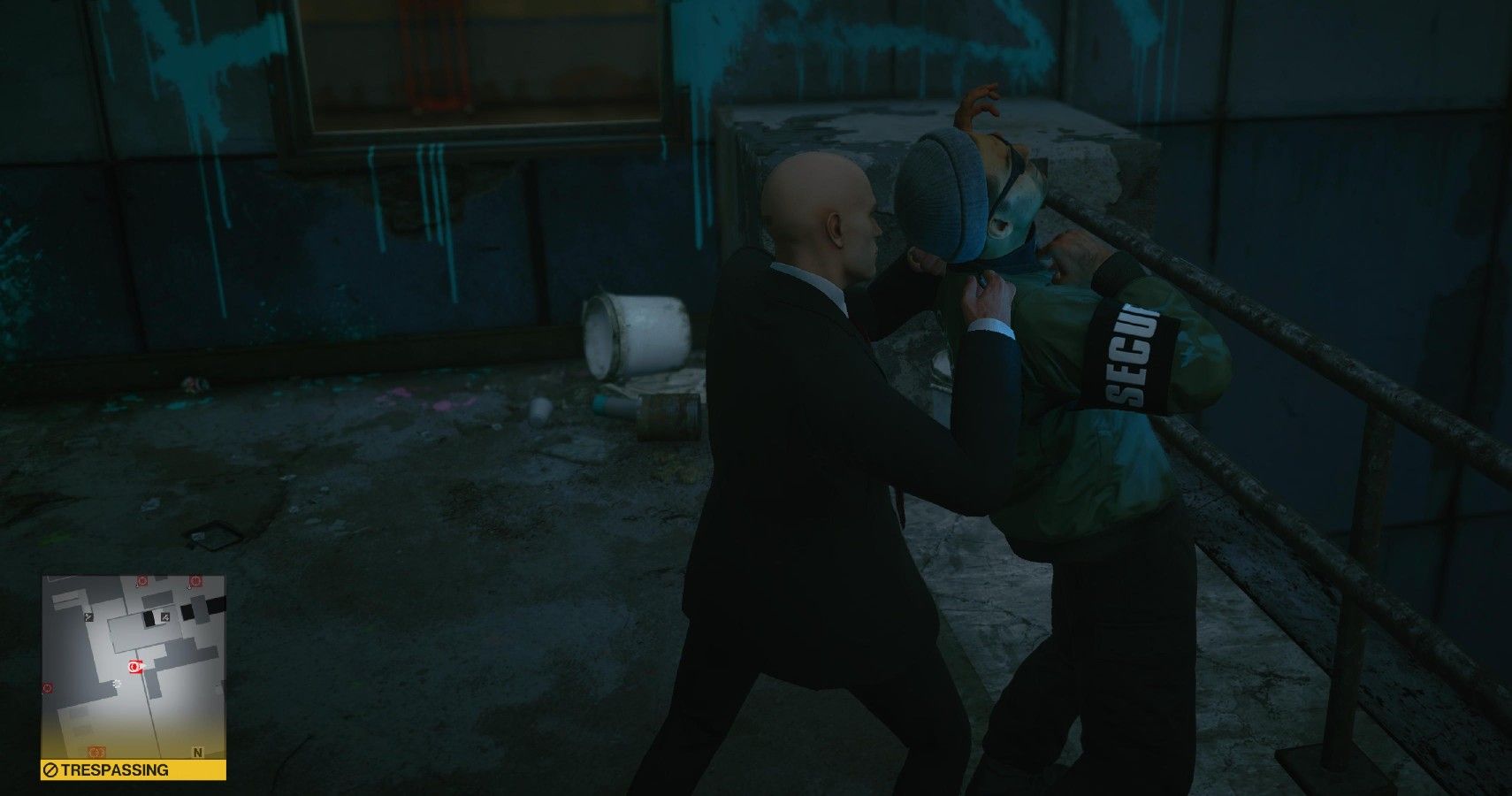 For your final kill, you’ll want to retrace your steps back over the skybridge. Head down the staircase on the far side until you reach the ground floor. The door leaving is a shortcut, but it opens from this side so if you haven’t already opened it you’ll now have completed that challenge, and unlocked it for next time too. Once outside in the Back Entrance area you’ll want to immediately turn around and head towards the crane.

Agent Thames patrols this area alone, but two groups of two watch out from the gate and further up the road. An accidental kill doesn’t count as a discovered body but it does cause other guards to break from their normal routes and routines so it’s better if you don’t drop the concrete on Agent Thames while he’s under the crane. 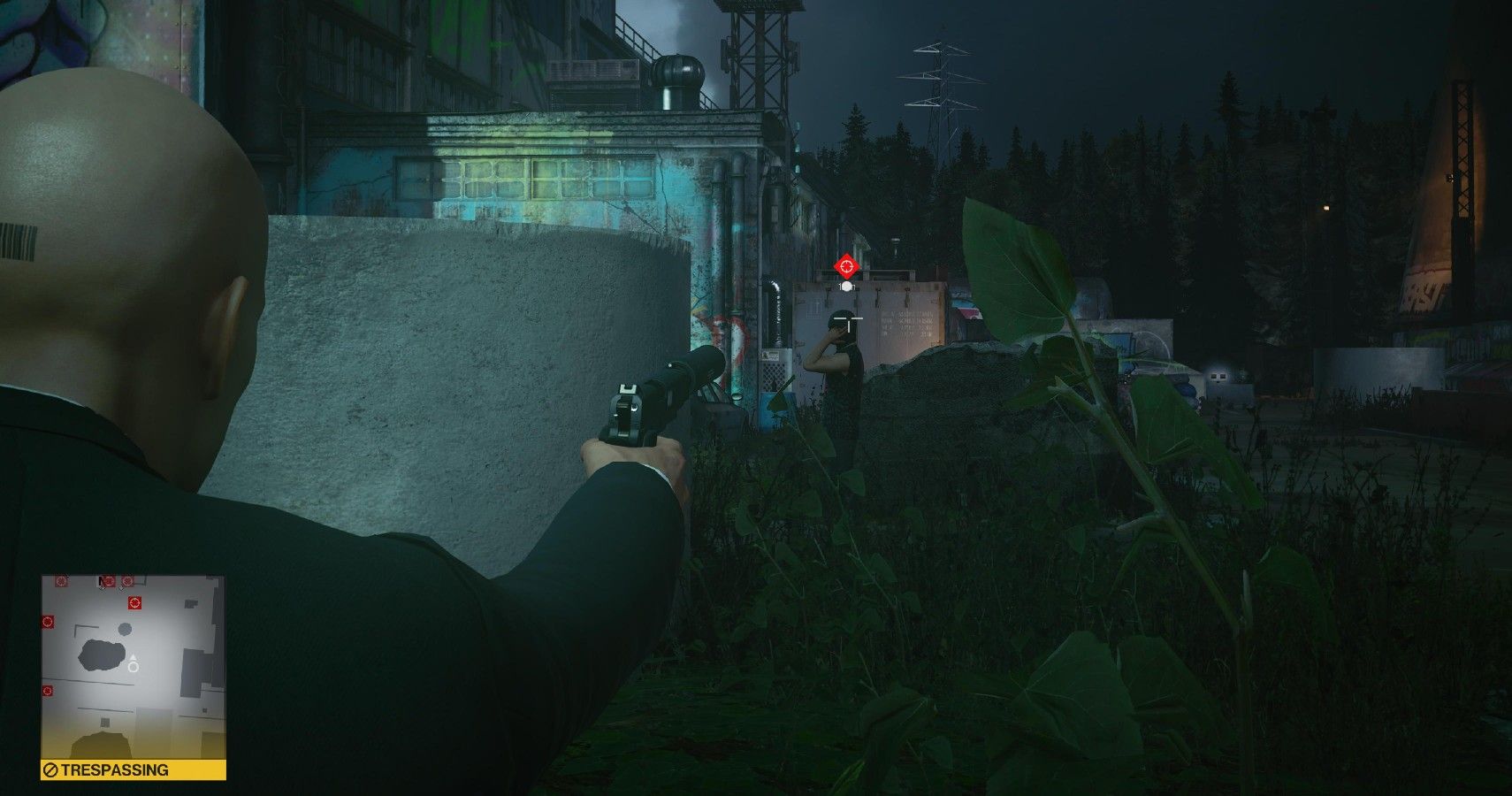 Instead, you can catch him unobserved by waiting for him to look towards the door barrier. A headshot is an effective means to kill him, and you can get quite close using the overgrowth along the righthand wall to conceal yourself.

With your fifth and final target killed, the ICA will give up the hunt and start fleeing the scene. Unfortunately, that means that several will come this way to leave past the road barrier Thames was just looking down.

To make sure they don’t find the body can hide it in the grass you used to get close, but this isn’t necessary. If you immediately head for the stairwell you used to arrive in the Back Entrance area, you should spot the Delivery Driver’s scooter parked just in front of the door. If you remembered to grab his keys when you knocked him out at the beginning of the mission, you can almost immediately leave the mission.

With that you can make sure no one finds any of the bodies, and should have unlocked the Silent Assassin, Suit Only Challenge during the debriefing afterwards. 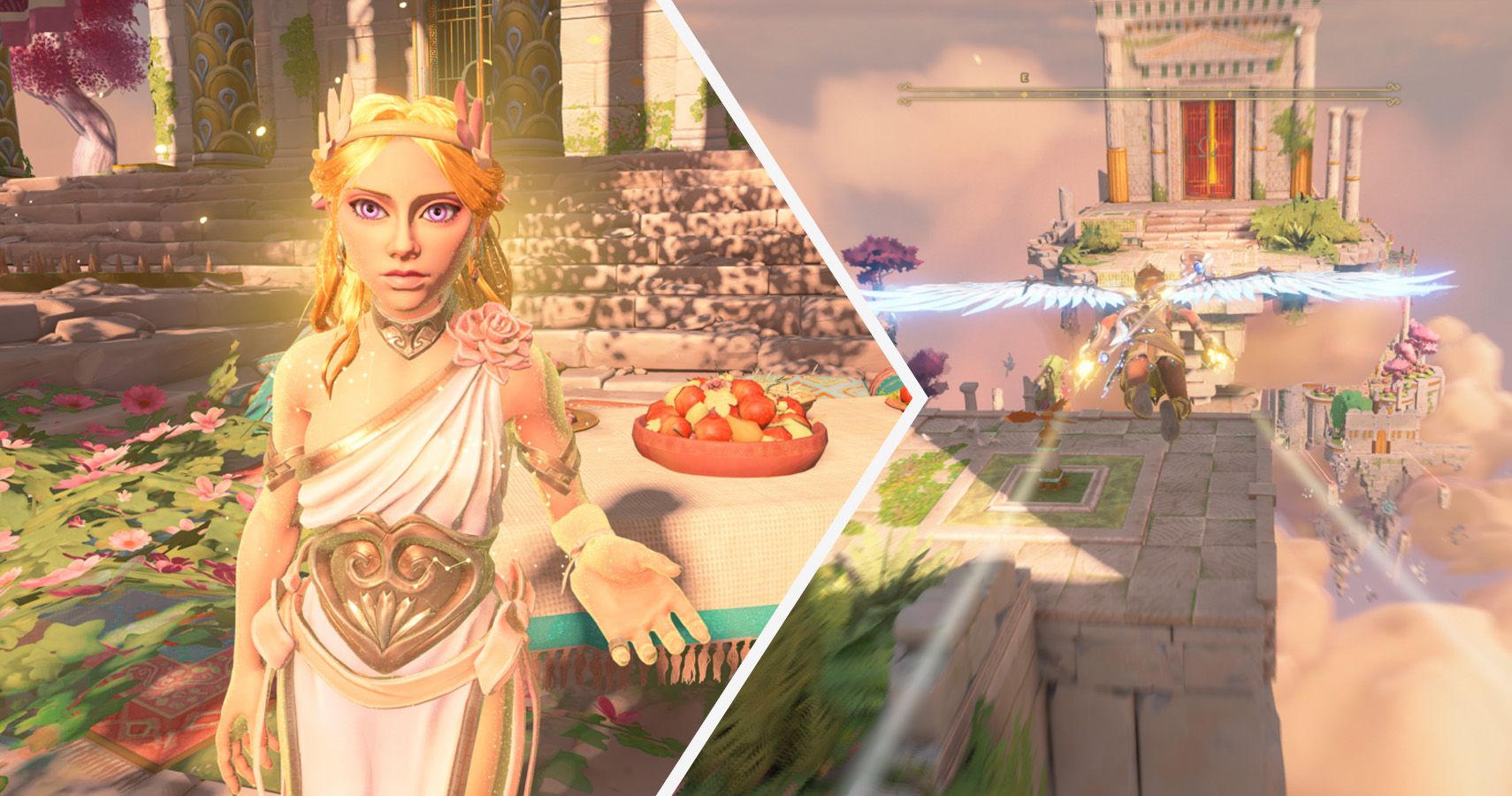 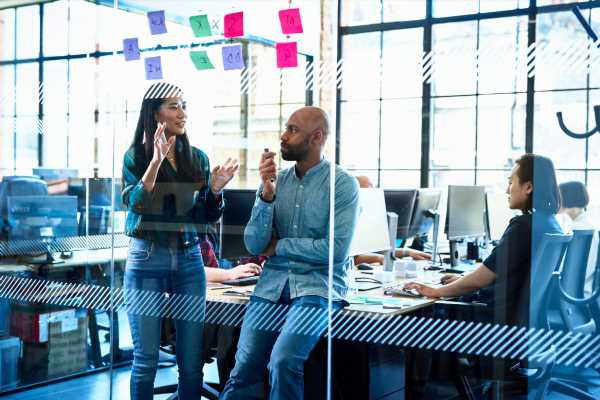 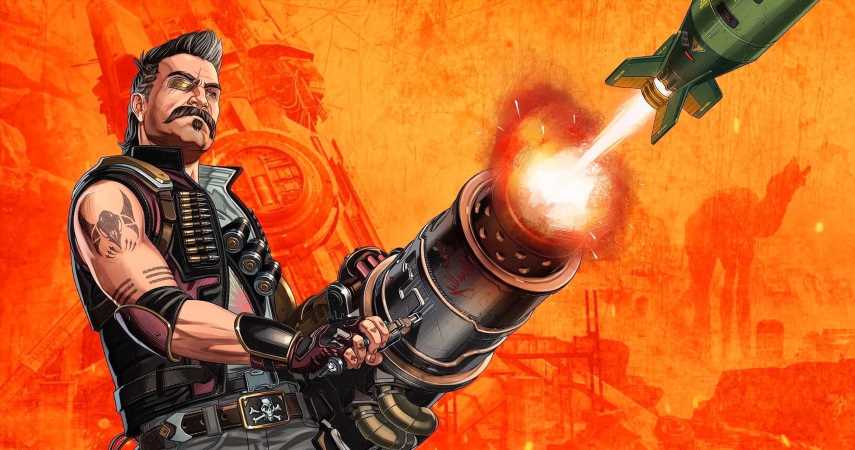