Escape rooms aren’t exactly a new thing, but the way people experience them is changing. What used to be the simple concept of guests locked in a room solving clues to find the key has been reinterpreted to fit different genres and gameplay styles. Halloween now sees many horror escape rooms pop up, challenging guests to escape a serial killer’s basement or other chilling location. Chicago’s Board Game Cafe will have two teams on separate “spaceships” work together in a joint escape room. Then there’s “Hunt A Killer” which is a mystery you can solve from the comfort of your living room.

Hunt A Killer is a subscription box service that sends you clues to a murder every month. The scenario is that a private investigator recruits you and your friend group to solve a murder in small town Illinois. The P.I. sends you clues in the box, everything from newspaper clippings and police reports to a map of the fictional town where the murder took place. A new episode comes once a month, culminating in a six-month “season” arc like a crime drama. 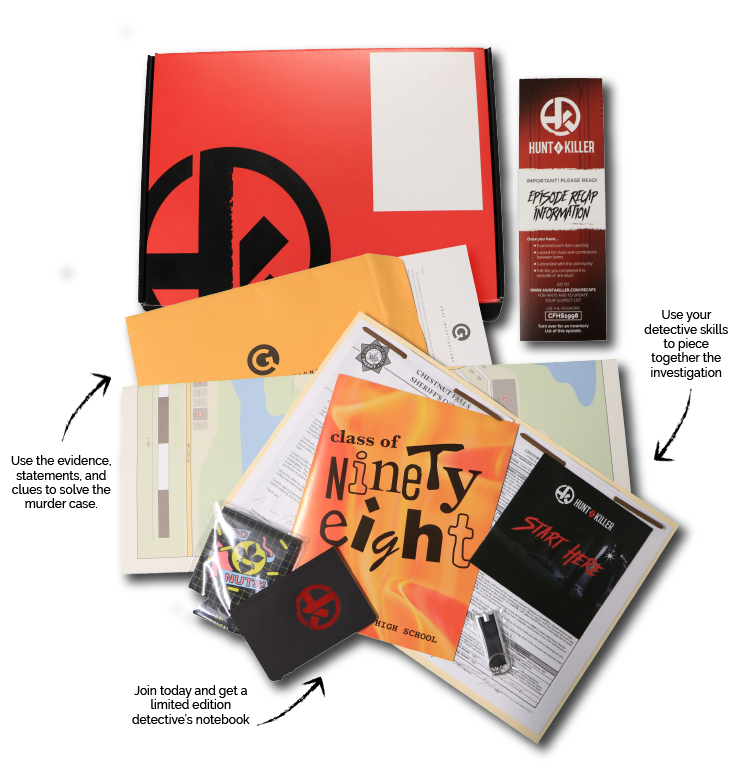 The best part of it being a subscription service is that you can play it on your own time. The presentation of escape rooms can be impressive, no doubt. But getting a group of friends to all agree on a date and time can be a challenge. Fail to fill a full group and you might get paired with strangers. The strangers might not communicate or take to puzzle-solving well. Then there’s always that whole talking to strangers thing. Blegh.

While Hunt A Killer cannot bring the environment of an escape room to your home, the clues still maintain a level of theatrical quality. The team behind the game includes “true-crime aficionados, writers, artists, and game designers” who worked together to recreate authentic-looking police reports and other evidence.

All that said, there is one big thing to worry about. Many user reviews seem to indicate that Hunt A Killer is an investment. You can’t really just try out the first box. In order to actually see the killer brought to justice, and thus see your sleuthing pay off, you really have to do the whole six month season. That can put quite a price tag on the experience.

The good news is that Hunt A Killer is running a holiday special at the moment. Those who sign up for the six-month or year long packages will receive a holiday gift. If you’ve got cash to spare and a loved one who loves escape rooms, Hunt A Killer might be a great gift idea. It beats trying to solve a riddle with a nice-but-clueless family who can’t even understand a basic shapes puzzle.

Microids Announces The Adventures Of Tintin For PC And Consoles