I’ve got some friends who love the Earth Defense Force series, but I’ve always turned my nose up at it. Every trailer I’ve seen has made them look like the worst bargain bin PS2 game your grandma accidentally bought for you in 2002, and in fact, that’s kind of what the series started out as. In the early 2000s, Japanese company D3 Publisher would contract any studio it could to make generic versions of popular games and release them as budget titles. These low-budget, unrelated games were released in a series called Simple, and very few of them ever made it outside of Japan. Simple 2000 series Vol. 31 AKA Monster Attack, released in 2003, was the original Earth Defense Force, and the naming conventions didn’t get much better from there. It was followed by Global Defense Force, Earth Defense Force 2017 (in 2006), Earth Defense Force 2025, Earth Defense Force 4.1: The Shadow of New Despair, and finally Earth Defense Force 5. And I thought Battlefield’s titles were all over the place.

Call me a snob, but I never paid much attention to the Earth Defense Force games, which dropped the budget price as soon as they made their way to the west with Earth Defense Force 2017, AKA EDF 3. At the behest of my strange friends, who have been nothing but enthusiastic about the series for years, I picked up EDF 5 during the most recent Steam Sale. I can now confirm two things: EDF is as bizarre, low budget, and janky as it looks, and also, it’s kind of great.

When you launch EDF 5 you’ll immediately be confronted with a menu that assaults your eyes and throws your mind back to an era of gaming long before anyone understood the importance of aesthetic UI. I wish I could give it the credit of being designed purely for the sake of utility, but it doesn’t have that going for it either. The menus in EDF 5, much like the rest of the game, are either a prank, or an unwanted throwback to the early 2000s, when games were made by a small group of people, so sometimes the entire group was missing some essential skills.

You start by picking a character class, then a weapon for both of your two slots. I went with the jetpack wearing Wing Diver and jumped right into the most aggressively annoying tutorial I’ve ever experienced in my life.

Unlike the rest of the game, which takes places in large open cities and other outdoor environments, the beginning of EDF 5 has you running back and forth through a series of tunnels flanked by a group of soldiers who – and I’m not exaggerating here – never stop talking for a full 15 minutes. And I don’t mean exposition or plot set up either, I mean the most inane and pointless banter you’ve ever heard in your life. You don’t get a single moment of peace while you walk from one end of the tunnel to the next, shooting giant ants with a gun that makes no sense (you click once and the entire magazine empties out). It’s just five NPCs telling each other not to get killed by the ants and wondering where they all came from over, and over. They never take a breath, they never shut the fuck up. I almost refunded. 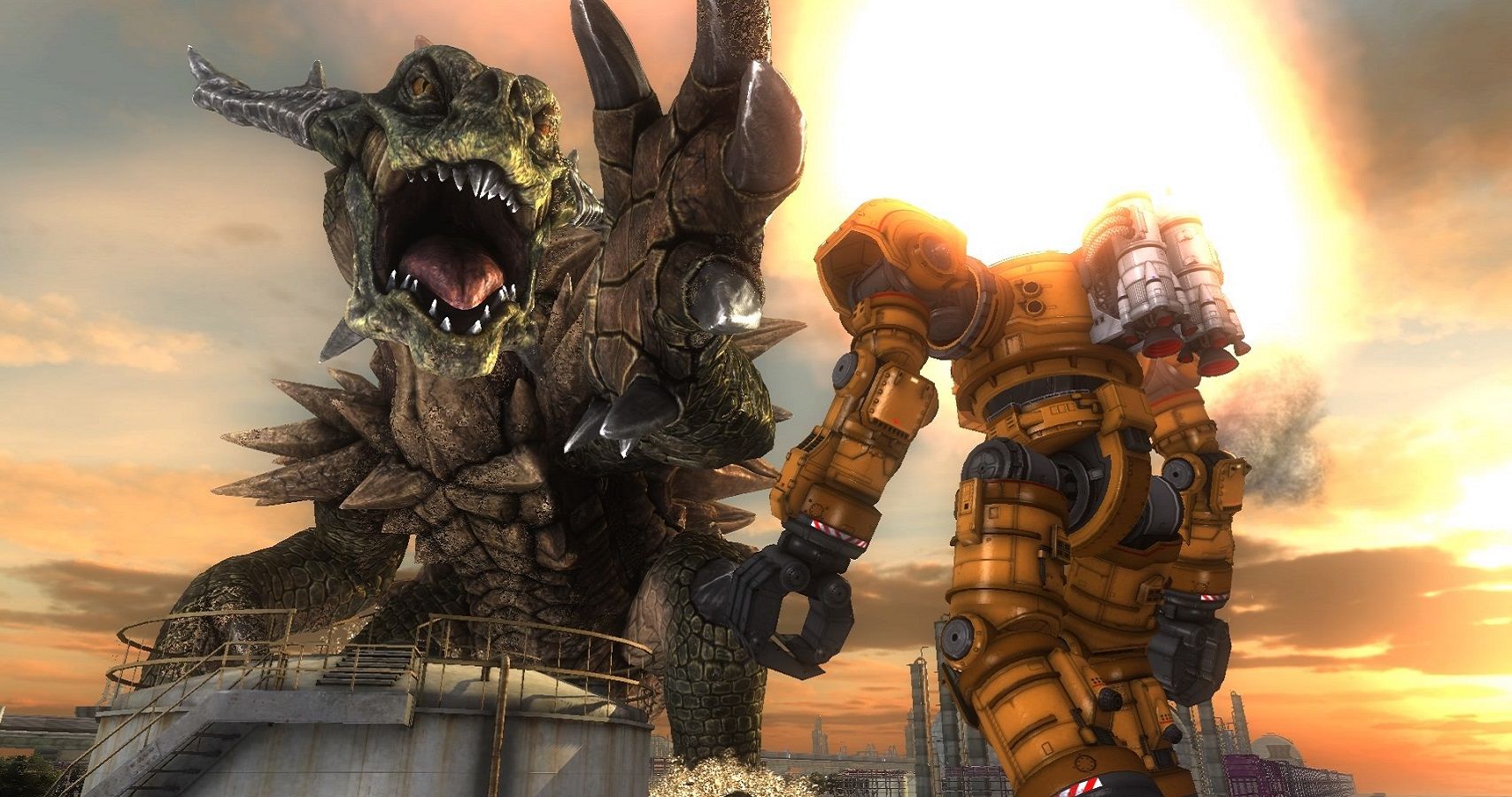 Meanwhile, the game isn’t teaching you anything. There are green boxes and red boxes that spawn from the dead ants, which disappear when you get close to them, but there’s no telling what they’re for. As I mentioned, the weapons don’t work like any other guns I’ve used before, and the jetpack is just as unwieldy. I don’t know where we’re going or what I’m supposed to do, and I just want to murder the soldiers with me and uninstall the game. I begin to think this is all a big setup to make me lose my mind when I start shooting at the soldiers and they start even more.

The mission ends and I’m rewarded with several dozen new guns, and suddenly everything starts to click into place. There are a lot of guns on EDF 5, and most of them have unique and complicated mechanics to learn. I picked two that sounded interesting – a mid-range energy weapon called the Thunder Bow and a close combat weapon called the Dragoon Lance – and started the next mission. I’m so glad I didn’t get a refund, because moments later I fully understood what makes EDF so great.

Mitch Hedberg had a joke about how great rice is when you’re really hungry and you want to eat 2000 of something, and I think the appeal of EDF is similar. Every mission after the first one places you in a big open area like a city or a military base that is besieged with thousands upon thousands of giant insects, which would be alarming if not for the fact that you are the world’s greatest exterminator. Your weapons give you the power to decimate rows of bugs like Moses parting the Red Sea, or obliterate hundreds of them in a second with an explosion so devastating it would cause earthquakes on the other side of the world. Every inch of the map is crawling with spiders and ants the size of semi-trucks and you can squash them as easily as if they were regular size. Between missions you’re rewarded with piles of weapons and upgrades so you can keep experimenting and working out new ways to wage war. There are so many to choose from that even after dozens of missions I was still finding new things to try. Pretty soon, all the things I didn’t like about EDF started to become what makes it so great.

EDF is a lot more self aware then you’d think from the trailers, even considering its a game about shooting bugs with a missile launcher. Those obnoxious soldiers that never shut up stick around, but eventually you can’t help but laugh at their absurd dialogue. There’s not a lot of plot beyond ‘these are aliens and they’re invading us’, but the constant stream of voice lines tells a more interesting story of xenophobia so deeply ingrained that the soldiers are still convinced this is must be a terrorist attack even after flying saucers dump out of a mothership and start firing laser beams everywhere. As you battle you watch UFOs fly down to the surface and offload an endless stream of giant insects. You can hear the soldiers yelling “Which country is doing this!?” over and over. There’s some really bad translation errors too, and I’d like to think the English voice actors read them anyway because they understood the characters are meant to sound ridiculous.

EDF 5 maintains its legacy as a budget title on every level. It looks 20 years older than it really is, it’s awkward and clunky to play, the UI is a disaster, and I don’t know this for a fact, but I’m pretty sure the rain sounds are from an ASMR YouTube video. It’s exactly as cheap as it looks, but I finally understand the charm in that. I’ve never played anything like Earth Defense Force, and I can’t believe it’s a real game.

Metal Gear: Survive's Wanderer Gets Put In Its Place: Your Shelf