This is not an official review of Yakuza 0, nor is it an official review of Yakuza Kiwami. It can’t be. The former released on PC last August, making this writeup more than six months overdue—or four years, if we time it to the original PS4 release. Kiwami’s PC port is only a few weeks old as I write this, but I just finished Yakuza 0 this week and have only managed to put a few hours into the follow-up.

That said, I can’t believe it took me so long to give this series a shot.

Okay, maybe it’s not that surprising. The Yakuza series is coming up on fifteen years old now, but until last summer’s Yakuza 0 port the games had been primarily released on PlayStation (and uh…Wii U, of all places). And from talking to friends who are longtime fans, the early games were rough. The core was there, the key elements that make the series so special, but it hadn’t quite gelled yet. The first two games to hit PC are modern Yakuza experiences, of a sort. Yakuza 0 is a prequel made a decade after the fact, and Yakuza Kiwami is a remake of the original game in the same engine as 0.

So yeah, maybe if I’d tried Yakuza back in 2006 I would’ve walked away. 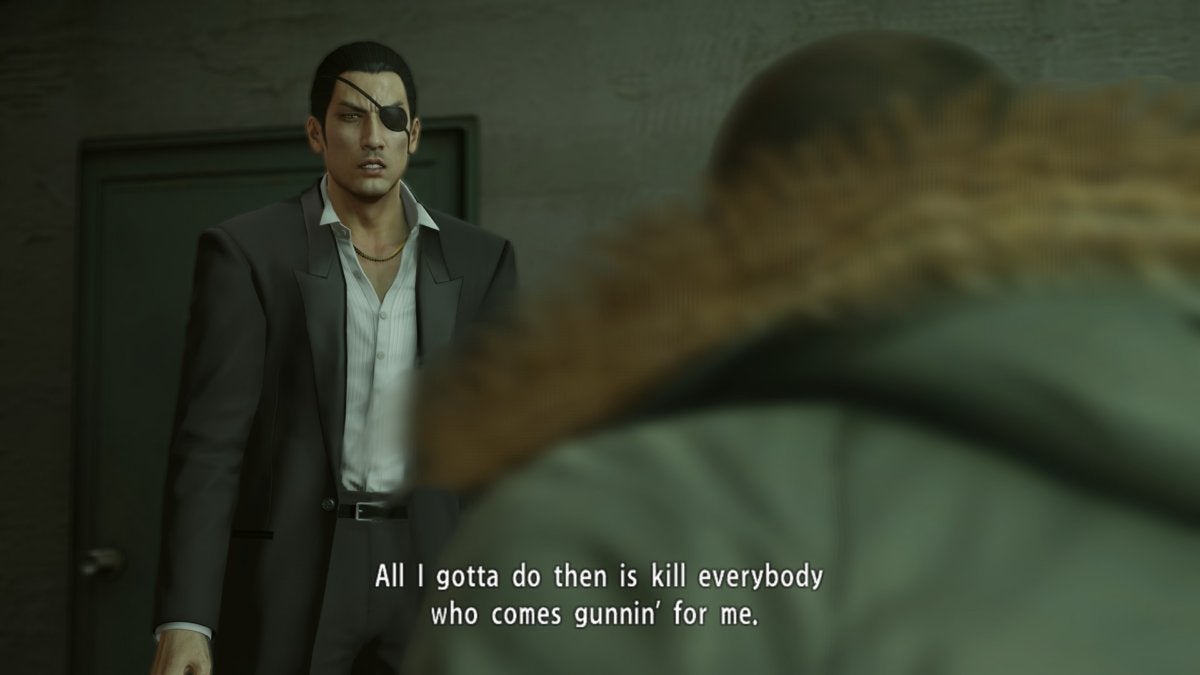 What a phenomenal work this is though. The series as it stands stretches from 1988 (in Yakuza 0) all the way through 2016 (Yakuza 6). It primarily follows one protagonist, Kazuma Kiryu, from his earliest days as a mobster across three decades of his life and the challenges he faces. And it also, by extension, follows the evolution of the city he calls home—Kamurocho, modeled after Tokyo’s Kabukicho district.

That consistency is what makes Yakuza so fascinating to me, so far. I make no secret of the fact I think well-defined characters are infinitely more interesting than the blank slates used by most RPGs. What makes The Witcher 3 a masterpiece is in part Geralt’s narrow worldview, one that sometimes forces the player out of their comfort zone in a way you don’t get with the generic Good Option/Bad Option/Neutral Option paradigm. It’s a game where leaving someone to die can be the right choice for Geralt even if it’s not the right choice morally.

Yakuza is not a choice-driven game. Kiryu’s story plays out primarily in lengthy cutscenes, and it’s set in stone. This is a playable movie, not a role-playing sandbox. 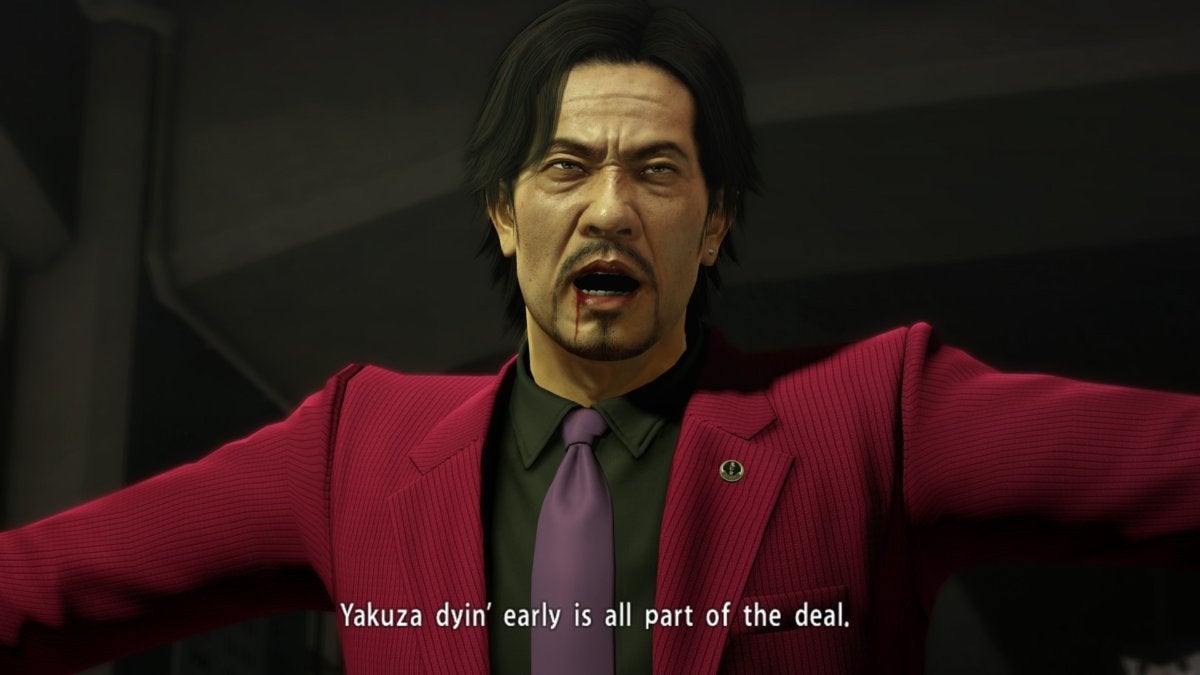 But wow, what a story. The stakes feel small, at times. Yakuza 0, if you had to describe it, is a story about a real estate dispute. There’s an empty plot of land in Kamurocho, and a mob-backed building project can’t commence until the owner is found and dealt with. This is not an existential threat. The world goes on, oblivious. Even in Kamurocho, the discussions are more about progress and the changing face of the neighborhood, less about the battles being waged behind the scenes.

Hell, Kiryu is little more than a bit player in the story. He’s entry-level yakuza at best, a kid in his early 20s. Nobody’s heard of him. Nobody quakes in fear when Kiryu comes around. He takes clothing advice from his friend Nishiki, is very fond of karaoke, and lives by a strict (albeit sometimes questionable) moral code.

Small stakes, small character. But the real estate crisis isn’t small to Kiryu. It’s a life-changing moment, putting into motion events that will define him for years (and games) to come. By telling us this story through Kiryu’s eyes, it takes on that world-ending characteristic. His stakes become our stakes, and suddenly you find yourself hanging on every word about the Empty Lot and its mysterious owner, and the backroom politicking of Tachibana Real Estate and the rogue Dojima Family. 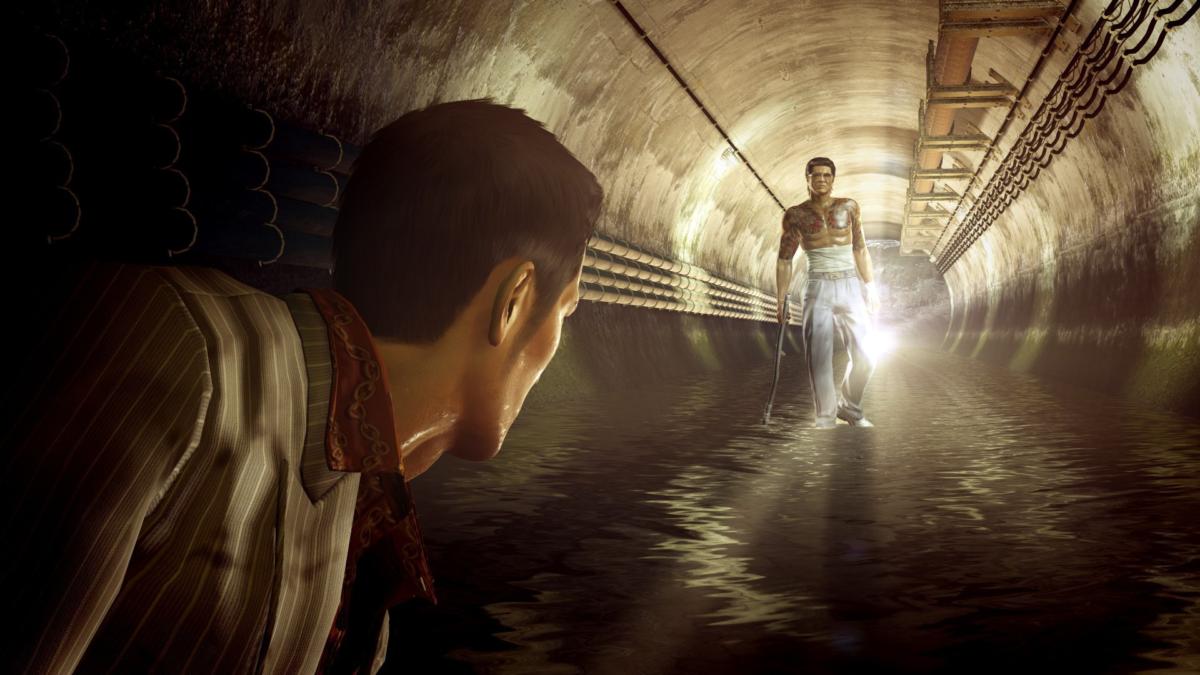 It’s some of the most skilled storytelling I’ve seen in a video game, and that’s why I can’t believe it took me so long to give this series a try. I care about storytelling in this medium. It’s the element I find most interesting, and in my years working here we’ve given Game of the Year primarily to those that advanced interactive storytelling—What Remains of Edith Finch, The Witcher 3, Wasteland 2, et cetera.

Yakuza 0 is right up there. There was a lot of padding in the 50-odd hours I played. There are a lot of side stories that go nowhere, and both Kiryu and fellow protagonist Goro Majima have a time-consuming grind of a subplot that added hours onto my completion time. The character arcs are incredible though—watching Kiryu go from some naive try-hard to a man who knows himself and his values, watching Majima’s ennui turn to passionate rage and then to a sort of manic sadness.

And the rest of the cast, they have the same depth. The swaggering lieutenant Kuze starts as a one-note foil for Kiryu but ends up a weirdly sympathetic man with his own skewed code of honor. Awano, another lieutenant, reckons with the fact that he gave up his values for a life of luxury. Sagawa, Majima’s main antagonist, takes on almost a father-figure role in the end. 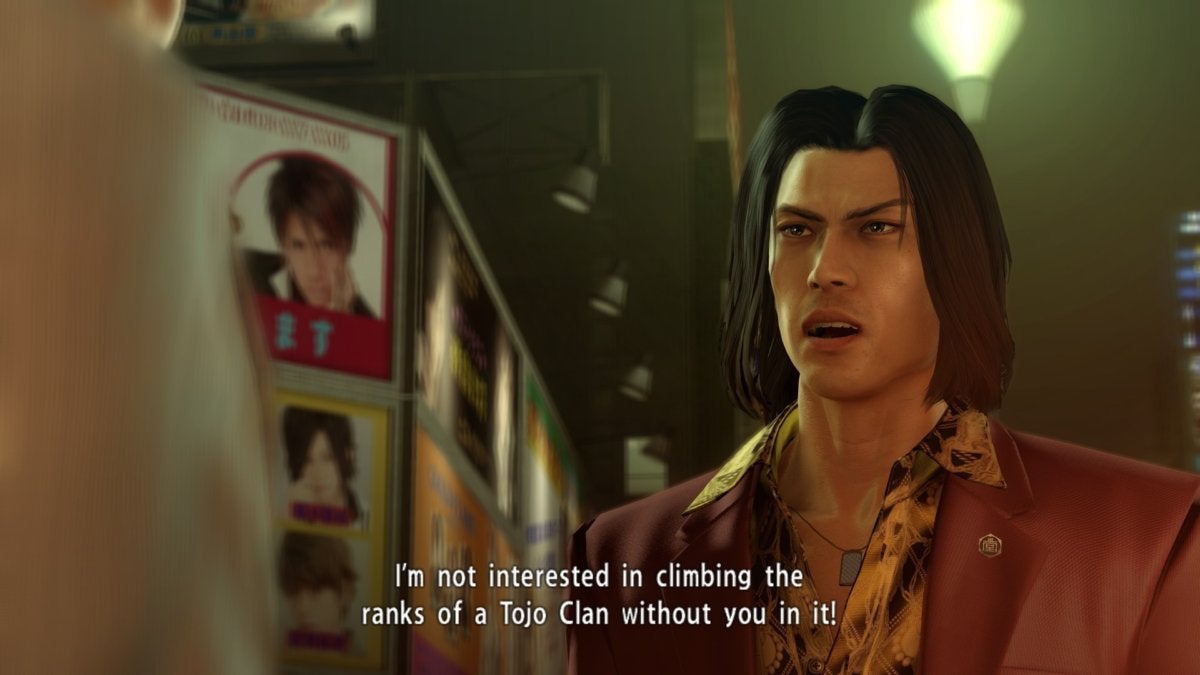 I’ll admit, I started playing Yakuza because I heard so much about the weirder/sillier elements. Kiryu, for instance, becomes a real estate mogul in Yakuza 0, snatching up properties across Kamurocho. Notably, you can recruit managers into your company, and one of the potential managers you unlock is a chicken. A chicken named Nugget, for that matter. I remember hearing that and thinking “Well damn, I have to play this now.”

And even after 50 hours, I never grew tired of Majima’s “Breaker” combat style, an ultra-stylish form that was part-martial arts, part-break dancing. It’s equal parts absurd and overpowered, and I miss it now that I’ve moved on to Kiwami. 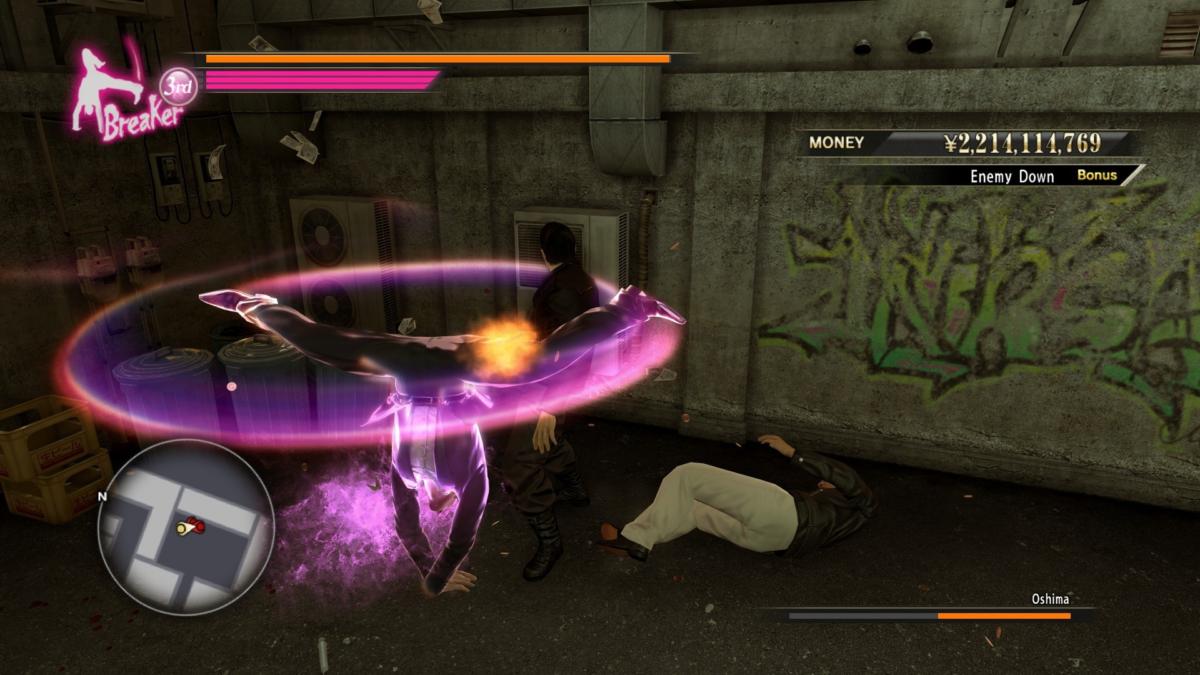 When I look back over my screenshots though, so many are of emotional story beats—betrayals, or two old friends forced into conflict by outside circumstances, or people coming to terms with grief. There’s more character development in Yakuza 0 alone than most studios could manage in a seven-game series. And again, it’s not just Kiryu’s arc, or Majima’s. Plenty of games build up an interesting protagonist, given enough time. Yakuza’s cast numbers dozens of characters though, and even a lot of the B- and C-tier players are handled with a care that belies deep affection.

That affection extends to the world as well. On the one hand this slice of Kamurocho is very video game-y. I remember opening the map at the start of Yakuza 0 and being like, “That’s it?” It’s maybe five blocks in each direction, a pittance compared to the sprawl of something like Assassin’s Creed: Odyssey. And yet Yakuza 0 feels somehow more real, with its cramped convenience stores, its food carts and restaurants, its back-alley bars and concrete-ridden parks and karaoke dens.

I was even more delighted when I loaded up Kiwami and realized it was the same map, only years later—wandering around, seeing which stores had changed, which had stayed the same, what replaced a certain Empty Lot. With video games, there’s often this sense that reusing old assets is “cheating,” and yet here it helps ground the series. It makes Kamurocho feel even more real, seeing it age through the decades just as Kiryu ages, the two intertwined in each other’s stories. 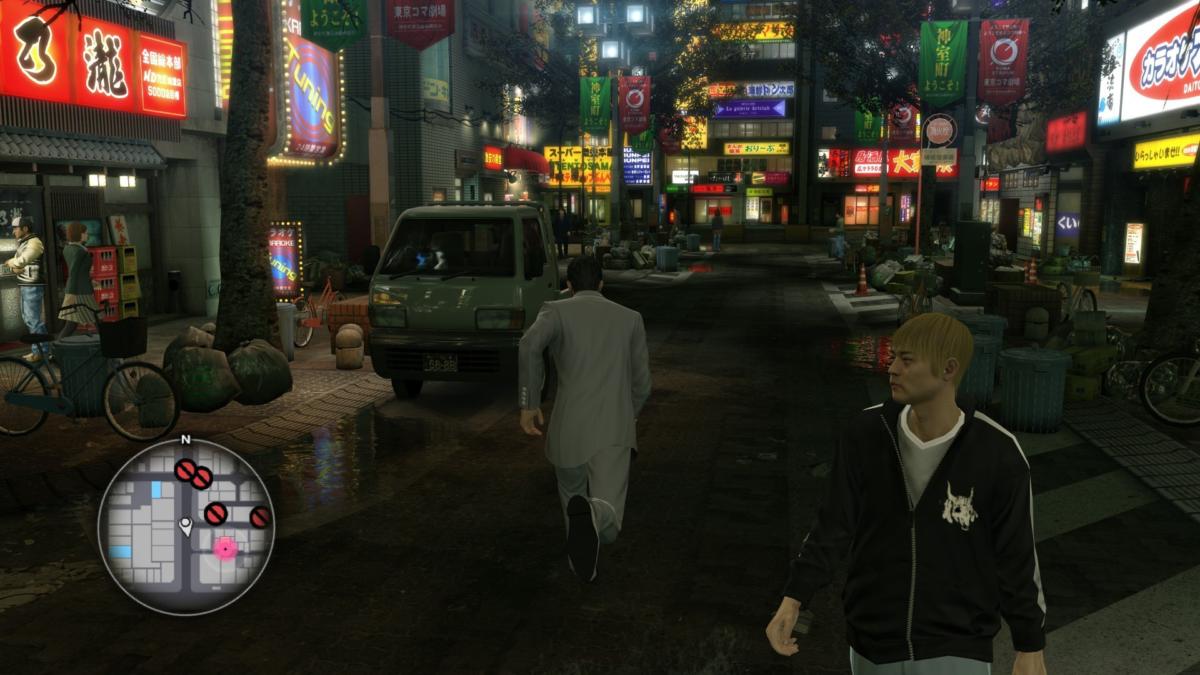 We so rarely get that digital nostalgia, that ability to “revisit” a place we’ve never actually been but remember like an old vacation. BioShock Infinite did it with Rapture, and The Elder Scrolls Online did it with Morrowind, but it’s still exciting when it happens, when a setting becomes a character in its own right. Kamurocho is one of those places, and it shows in every single detail crammed into its cluttered streets.

So yeah, perhaps this isn’t a traditionally structured review per se, but it is as strong a recommendation as I can give: Go play Yakuza. I’ve heard both Kiwami and 0 are good places to start—Kiwami if you think a shorter and more focused experience has a better chance of hooking you (and if you want to understand a few references when you eventually play the prequel), 0 if you want to play chronologically.

Either way, give it a shot. The series isn’t perfect by any means. Combat gets tedious, Yakuza 0’s save system is a bit of a pain, the side stories are definitely hit or miss, and I will never understand how to play Mahjong. But it’s an incredible reproduction of a time and a place. Few series have demonstrated this much care for their world, or the people who live in it, and it makes Yakuza an experience to be treasured.