The catch is that there are no clear directions for starting this quest. Your Adventurer's Tome gives a small hint that you must "help the Flamekeeper Gherdia to contain the Magick Eruption and repair the damage". There are far more prerequisites to picking up this quest than even the Adventurer's Tome hints. Let's take a look at every prerequisite quest you will need before completing Return Trip. 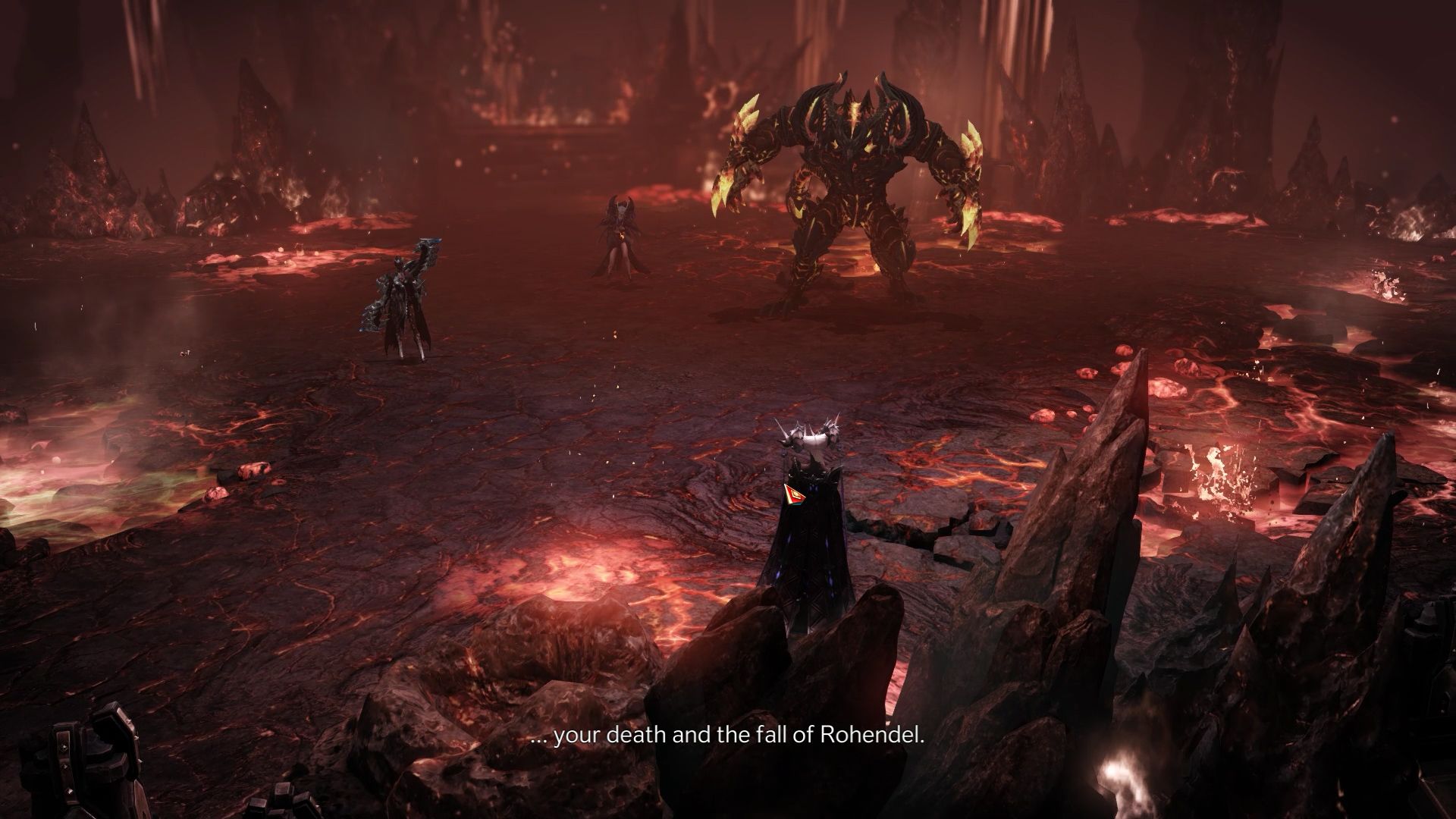 Even if you complete all the other prerequisites in this questline, you will not be able to accept Return Trip until you have completed Ratik. This is the final quest in the Rohendel main storyline, which is completed after conquering the Phantom Palace dungeon and speaking with Queen Azena after you have waved to the crowd of cheering citizens outside the Sunkeep.

Start Tower Of Thanks 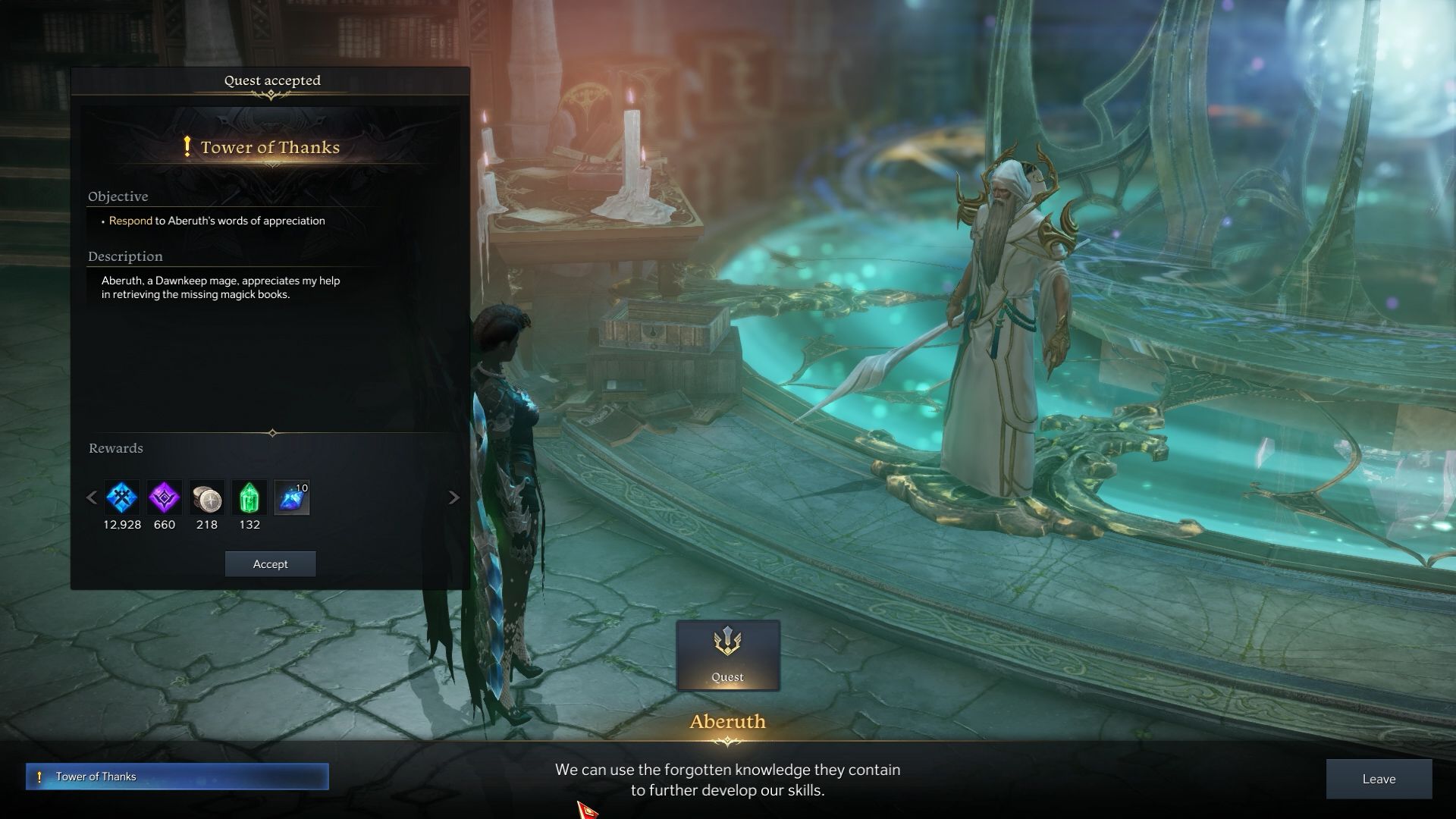 The next prerequisite to picking up Return Trip is a quest called the Tower of Thanks. Except, much like Return Trip, this quest has no apparent start NPC. This is because before you can accept the quest, you must first complete a series of miscellaneous fetch quests involving hidden magical books scattered throughout Rohendel.

These quests can be completed in any order. The only catch is that, should you have stumbled across these books in the wild, you likely would have no idea they were related without having found the first.

A Strange And Magical Book 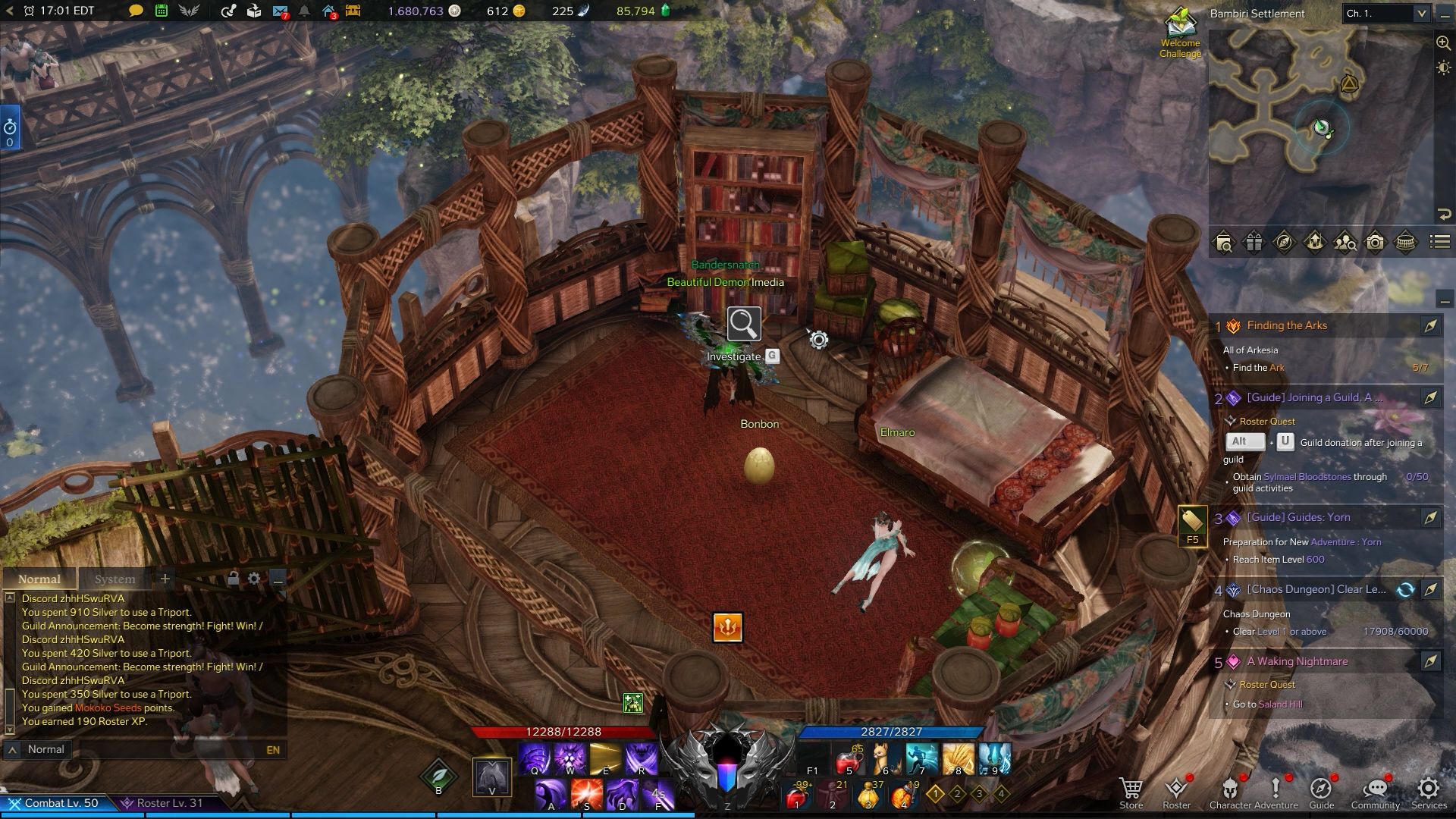 The Book Of Time 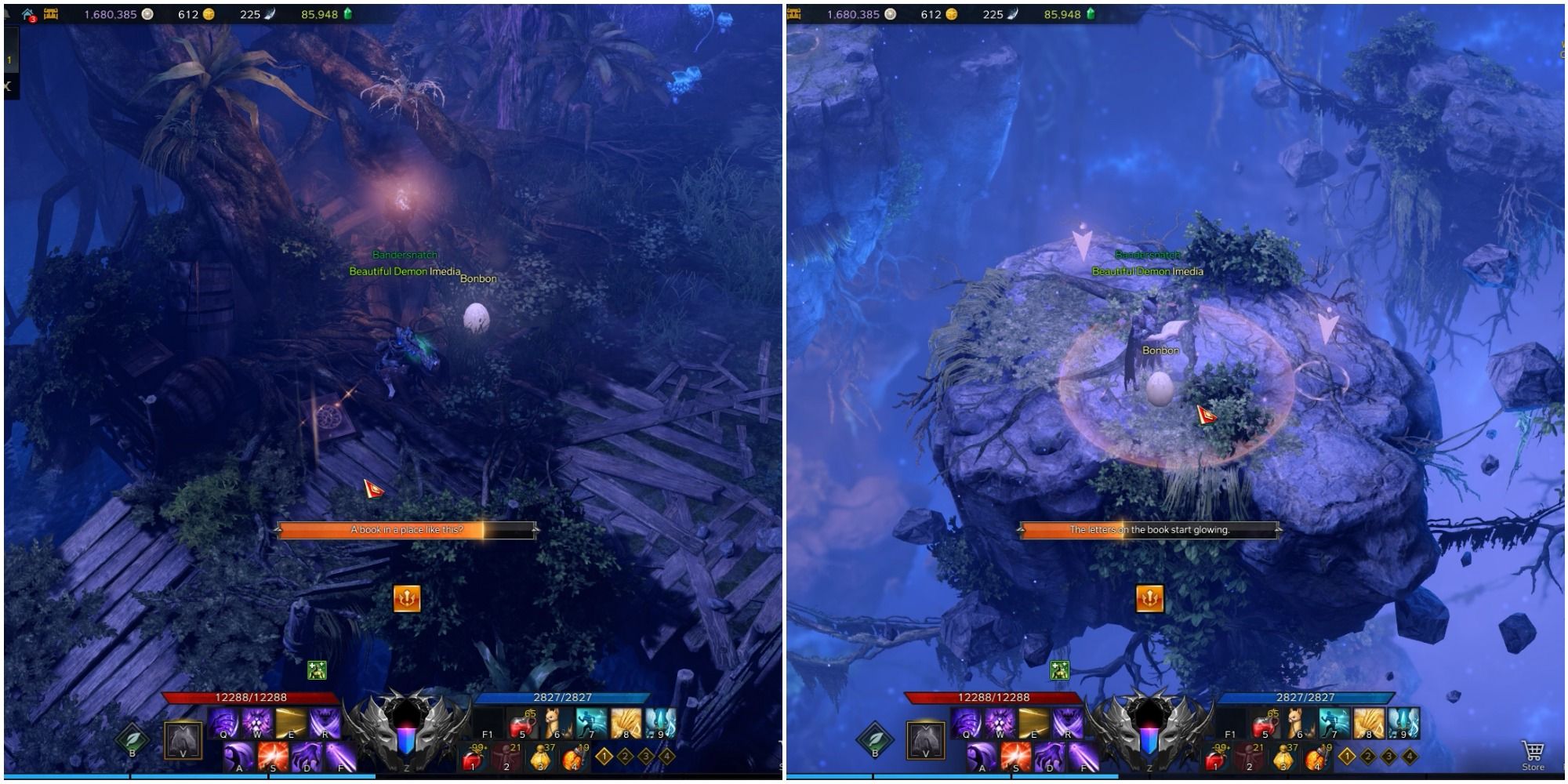 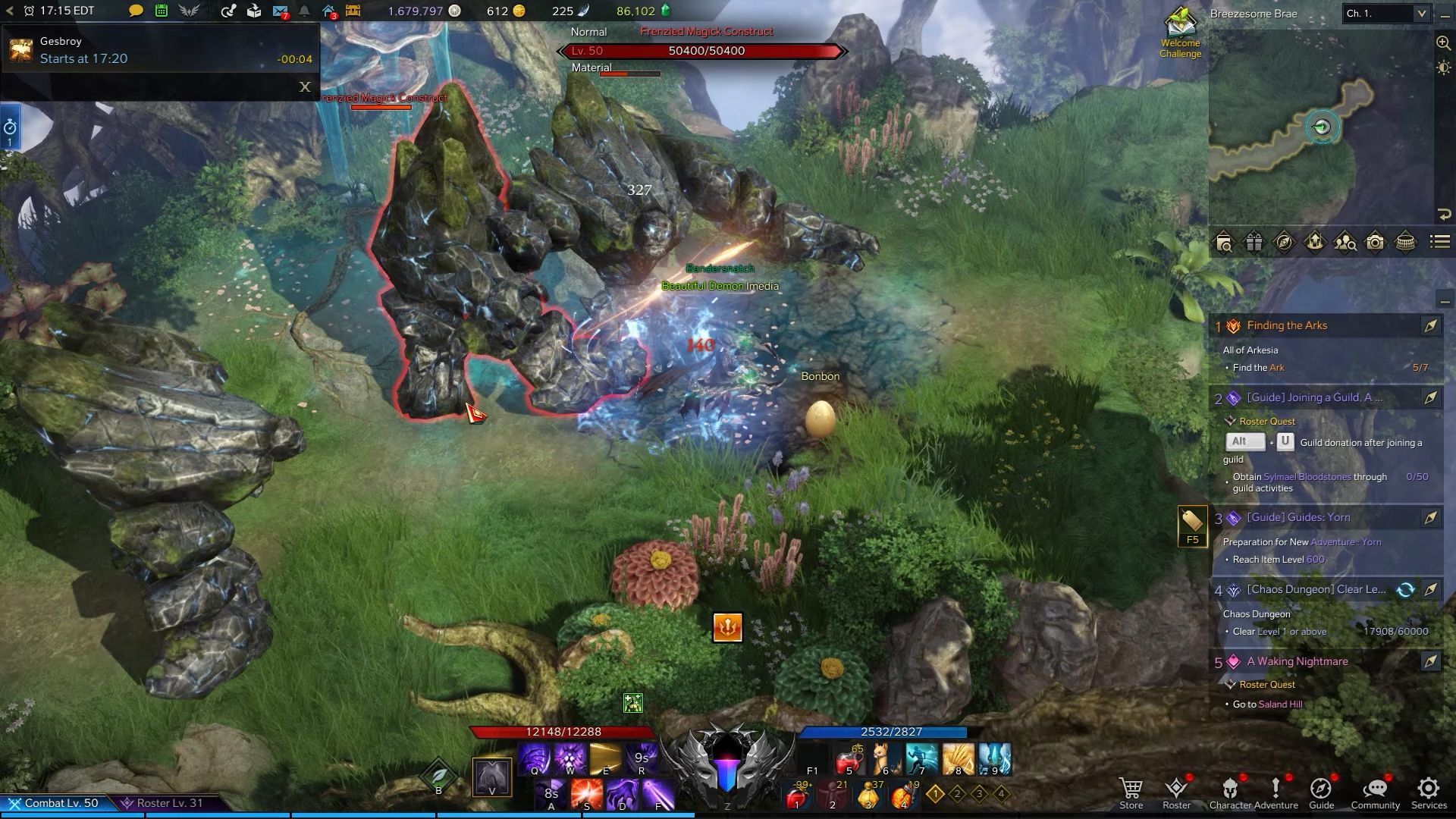 The Grimoire In The Fire 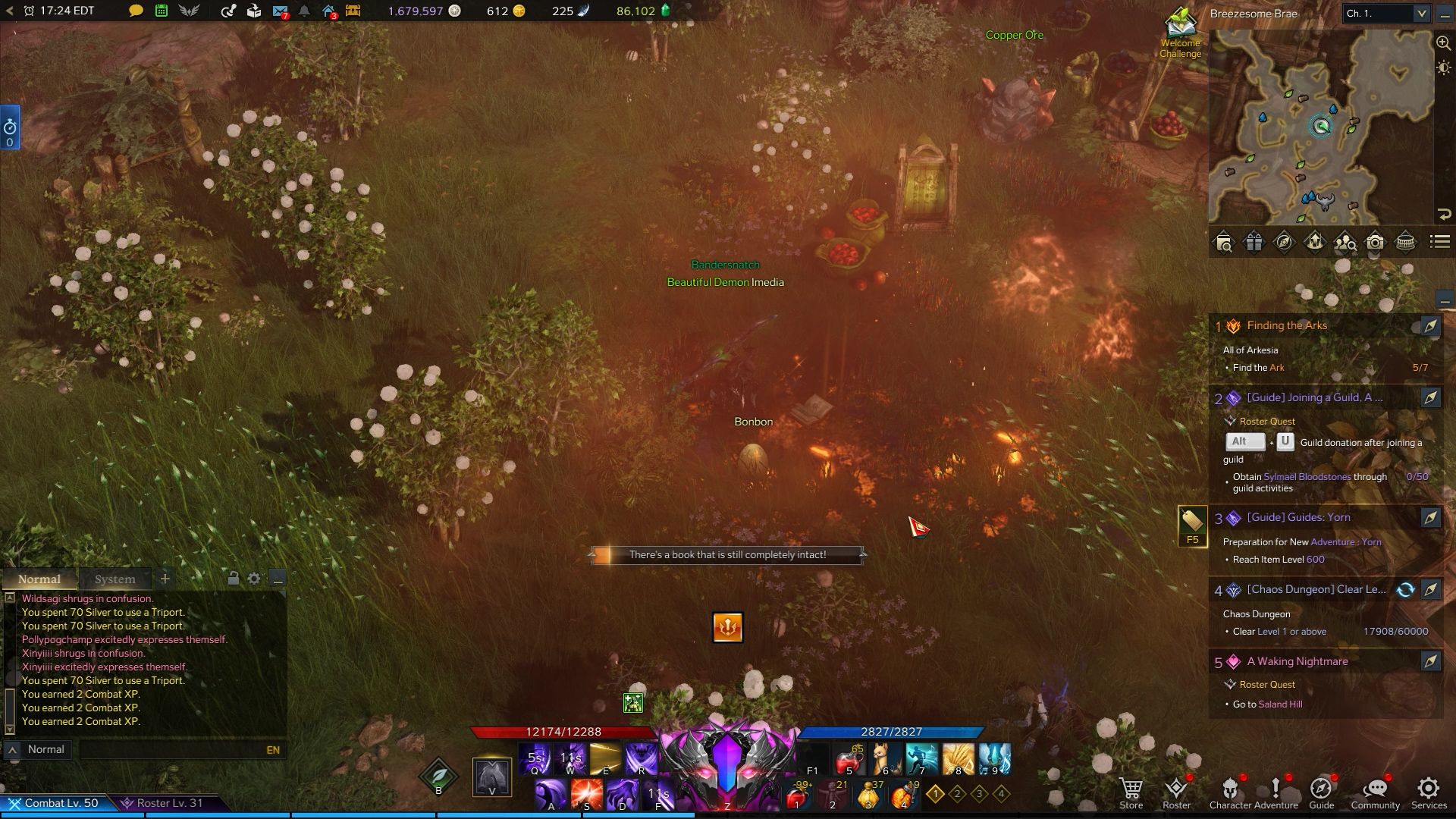 The Book Of Harmony 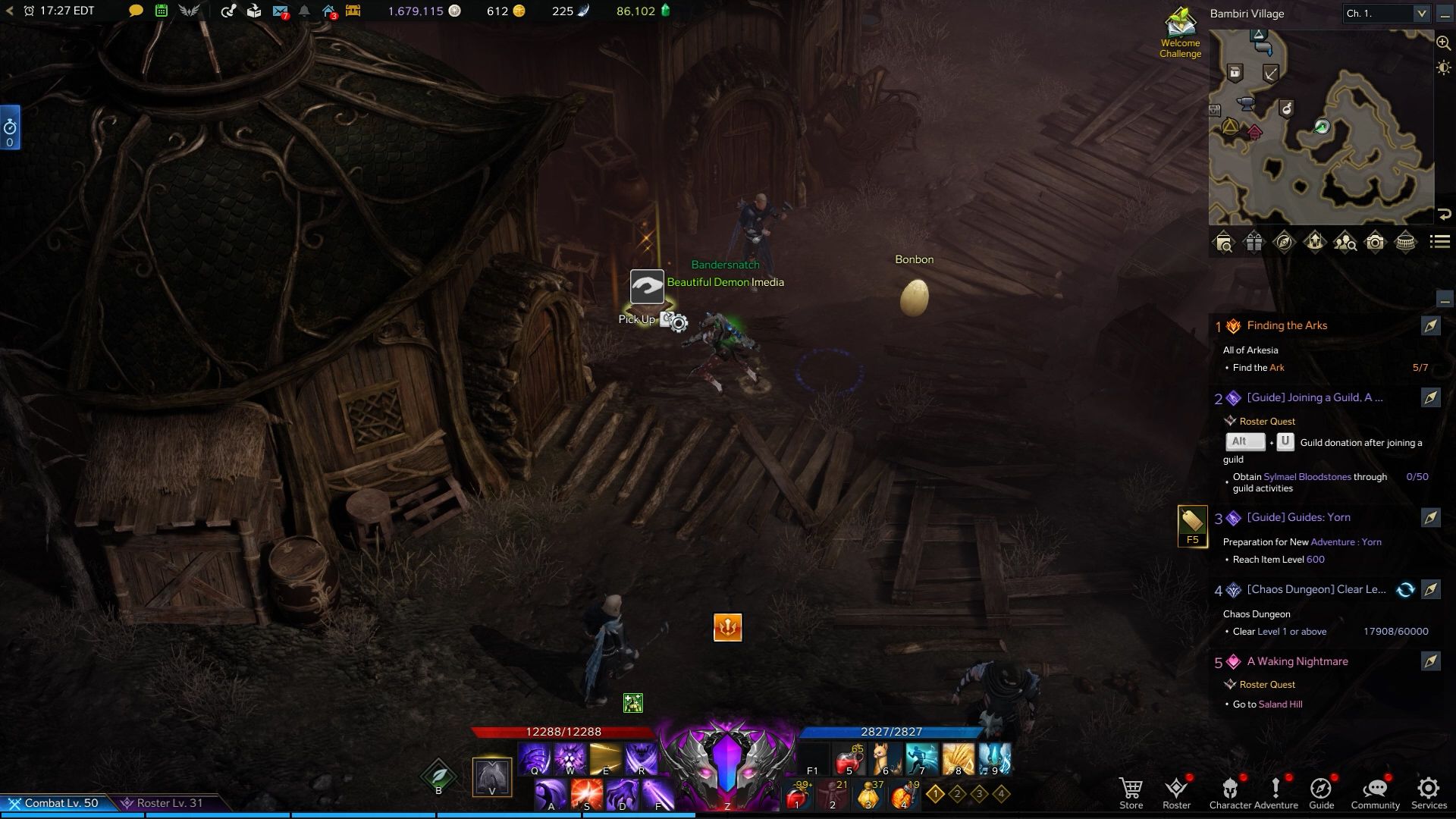 Complete Tower Of Thanks 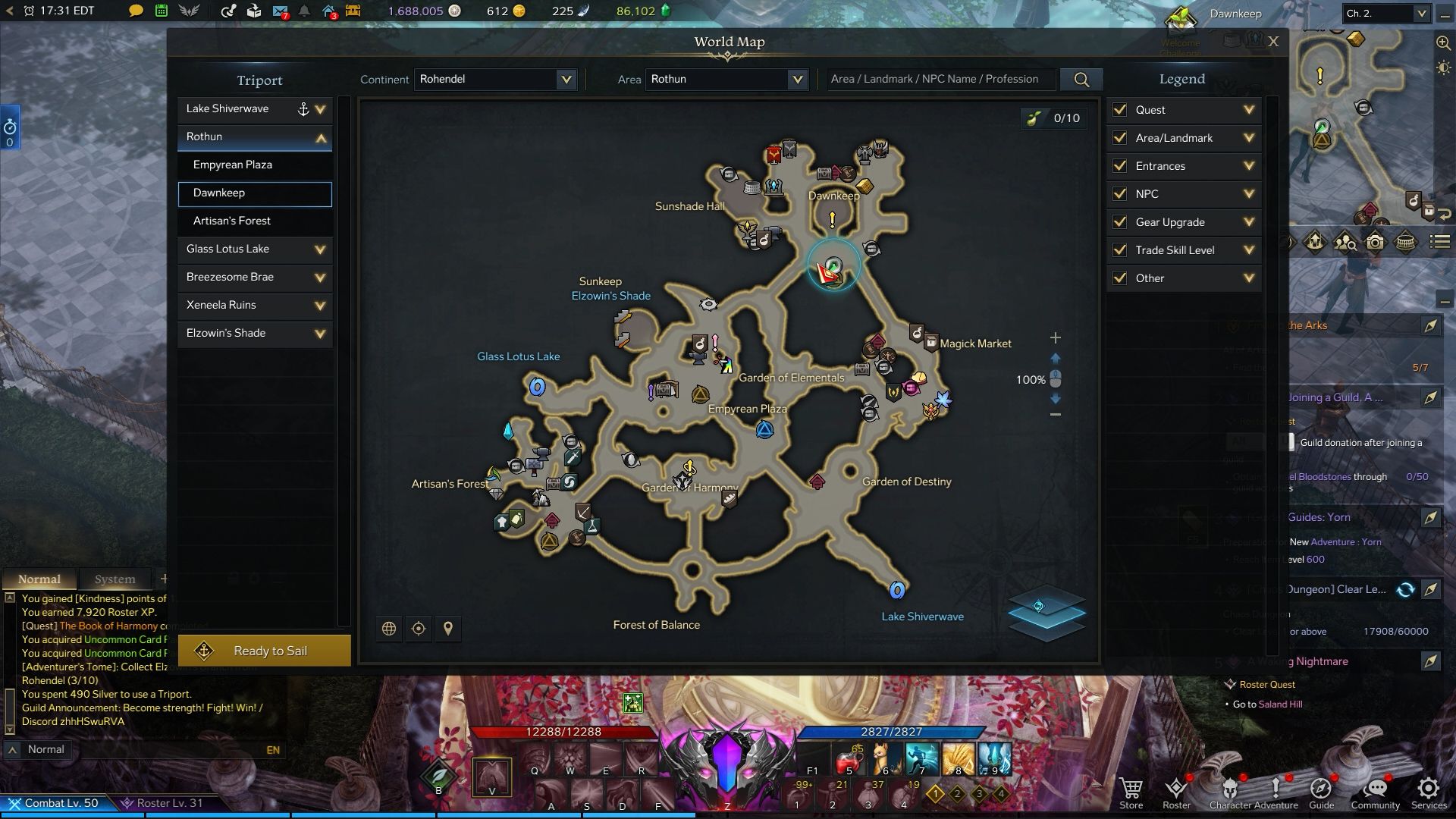 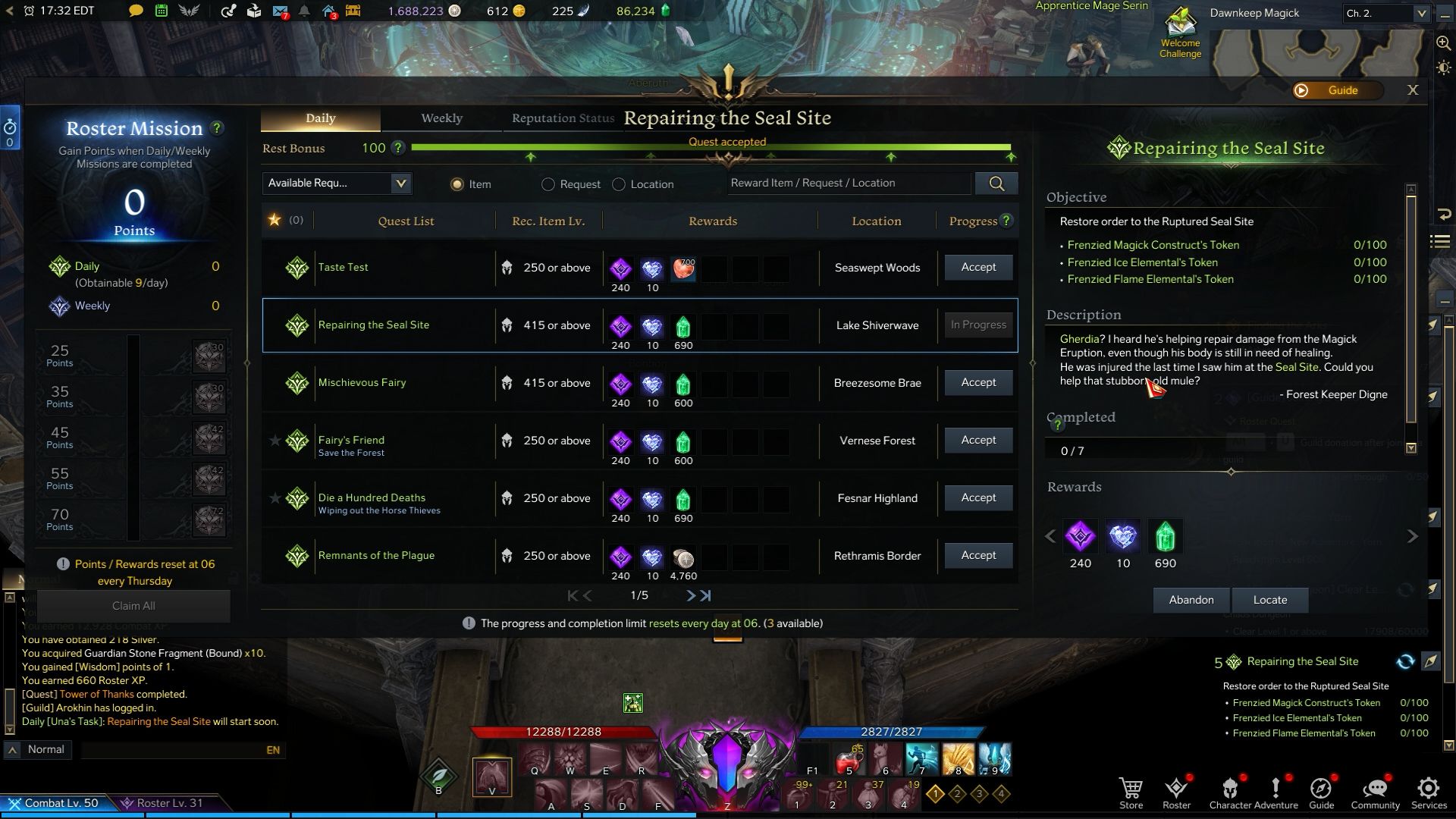 The second big prerequisite quest for obtaining the Return Trip quest is to Repair the Seal Site.

This is a daily Una’s Task that is completed in the Destroyed Sylvain Settlement area of Lake Shiverwave. It involves helping Flamekeeper Gherida defeat the three types of Magick Constructs that spawn there, just as the text in the Adventurer's Tome hinted.

You can access the Una's Tasks menu under the Adventure tab in the bottom right, or by pressing Alt + J.

However, to truly "repair the seal site", you will need to complete this daily and turn it into Gherdia seven times. The seventh time you turn this Una's Task in, Gherdia will thank you for making the site stable. At this point, he will offer you the Return Trip quest. 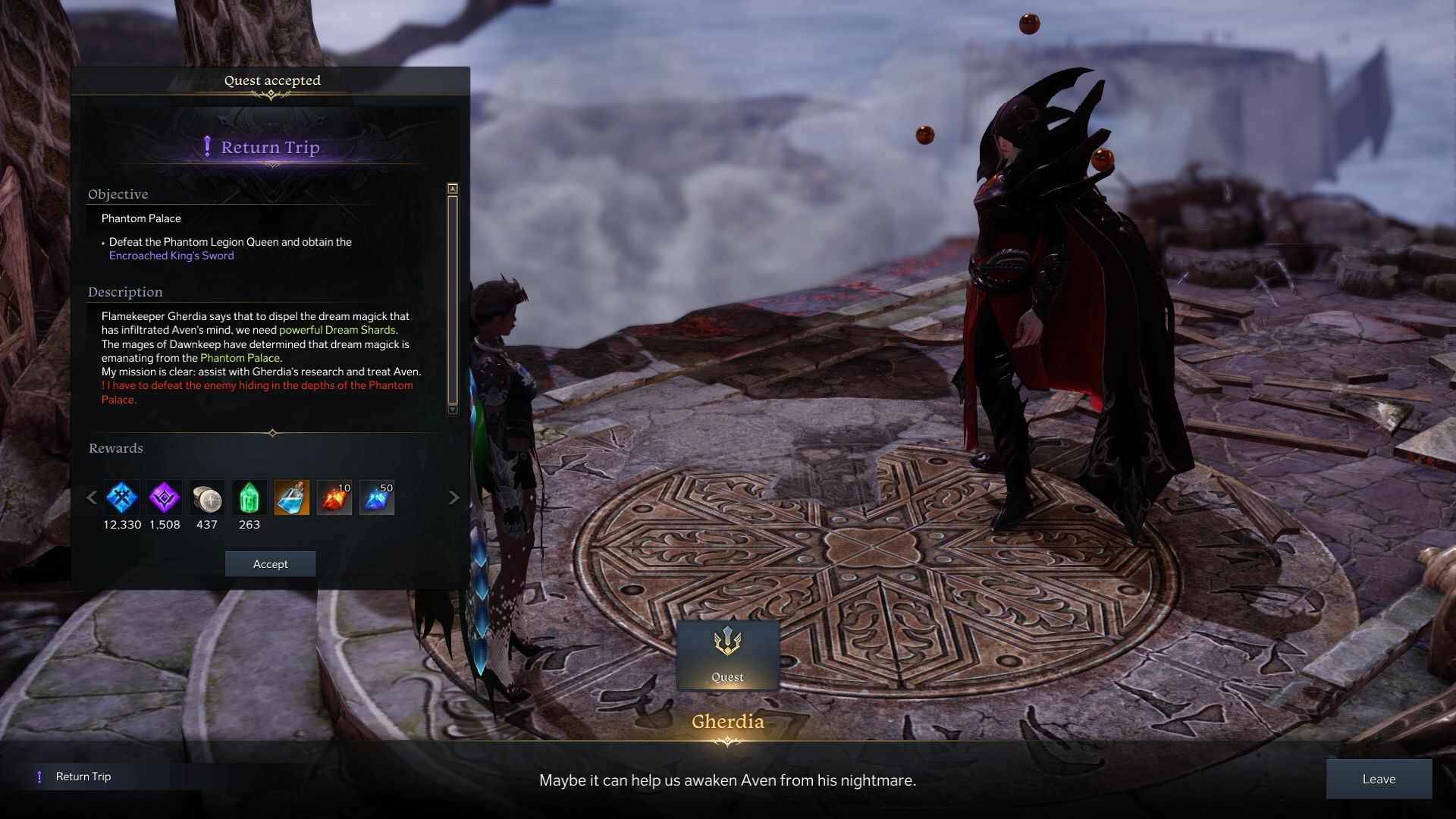 According to Gherdia, now that the seal site is stable, the last step in curing Aven of his curse is to kill the Phantom Legion Queen and obtain the Encroached King’s Sword from her.

Now, the Phantom Palace Gherdia mentions is not the Abyssal Dungeon. It is the same one you already did, back in Elzowin’s Shade. You can enter on normal or hard, but you will need to do this dungeon again to reach the Phantom Legion Queen and loot the Encroached King’s Sword. You can leave immediately after this by playing the Song of Escape sheet music and still keep the sword.

After you get the Encroached King's Sword, talk to Gherdia again. He will make some medicine to bring to Aven. Travel to Aven’s house in the Sylvain Residence of Lake Shiverwave to give the medicine to the Injured Aven.

Once the medicine is administered, Aven will recover from his curse. Speak with Turan and Aven, and the quest will be completed. 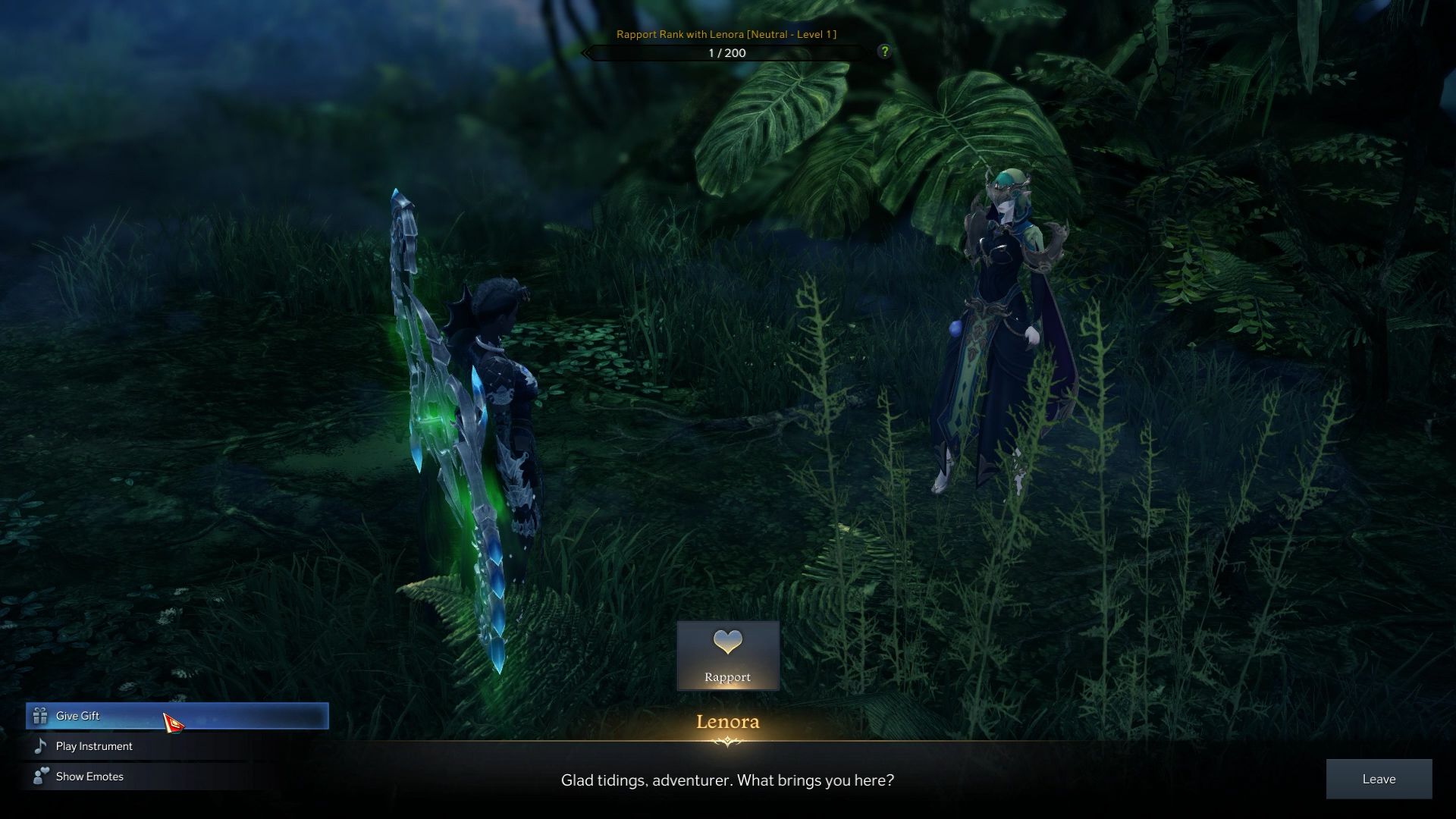 Immediately after completing Return Trip, some text should appear on-screen which says that Lenora wants to meet with you. Now Lenora is unlocked as a Rapport NPC, and you can find her by the East Stardust Forest Triport in Elzowin’s Shade.