Life has found a way with Dinosaur-themed decks in Magic: The Gathering. These powerful prehistoric decks are all about ramping out some of the strongest creatures in the game as quickly as possible. The whole deck isn’t all Dinosaurs, there is plenty of space in Commander decks for all sorts of cool cards to help your Dinosaurs take the game.

Sending your prehistoric creatures at your opponents can be risky. There are all sorts of combat tricks, board wipes, and other powerful creatures to stop your personal Dinosaur army from winning the game. There are plenty of options to power up your deck, but these are some of the best cards you can include for your Dinosaur-themed deck. 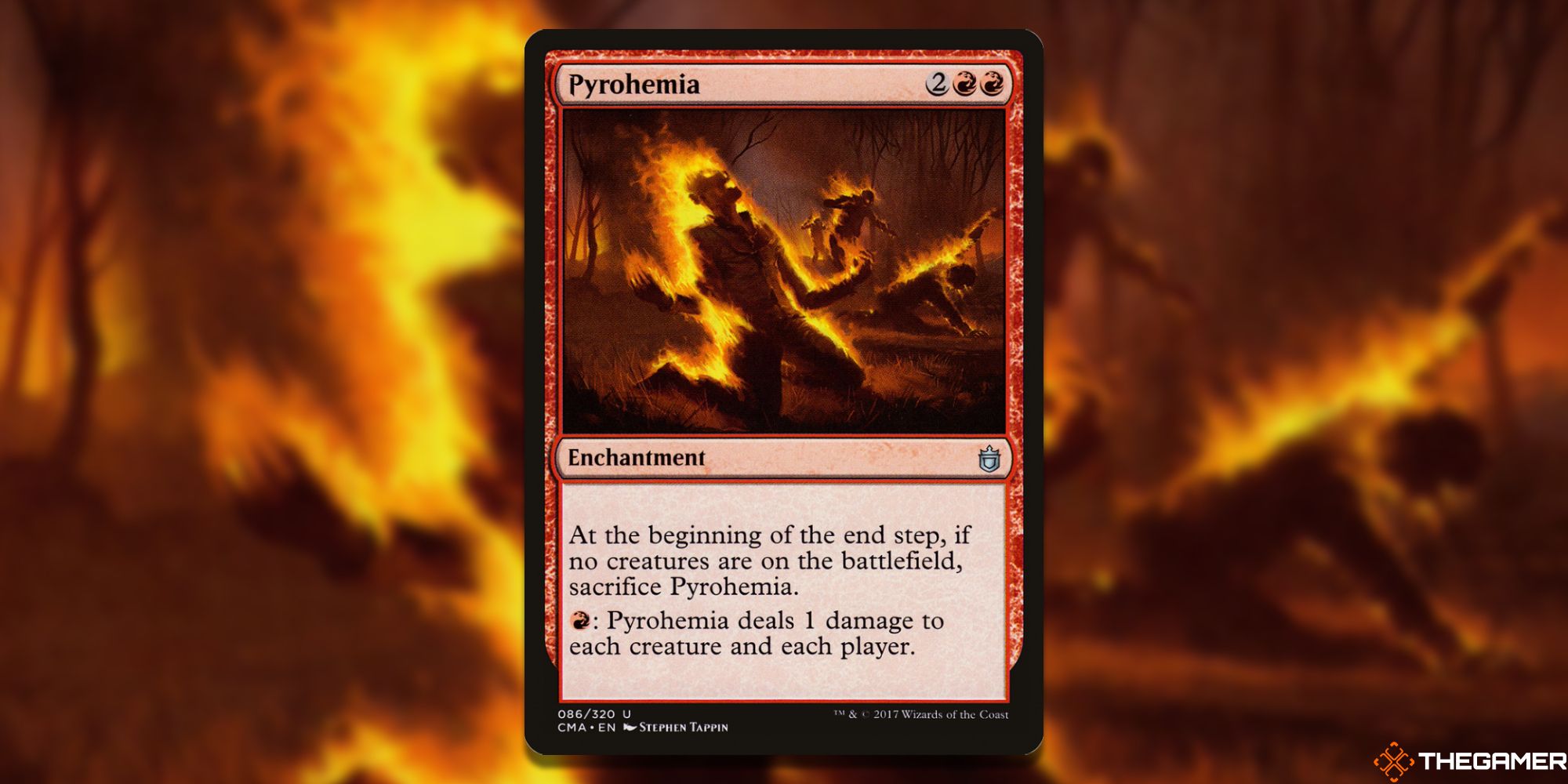 One of the more iconic features of Dinosaurs in Magic is the enrage ability. This ability has your Dinosaurs perform unique abilities when they take damage of any kind. Even better, is when the creature survives the damage, potentially letting you do it again the next turn. Pyrohemia lets you spend just one red mana to deal one damage to everything, your Dinosaurs included, triggering all their enrage abilities, picking off any creatures with at least one toughness, and slowly whittling away your opponent's life totals. 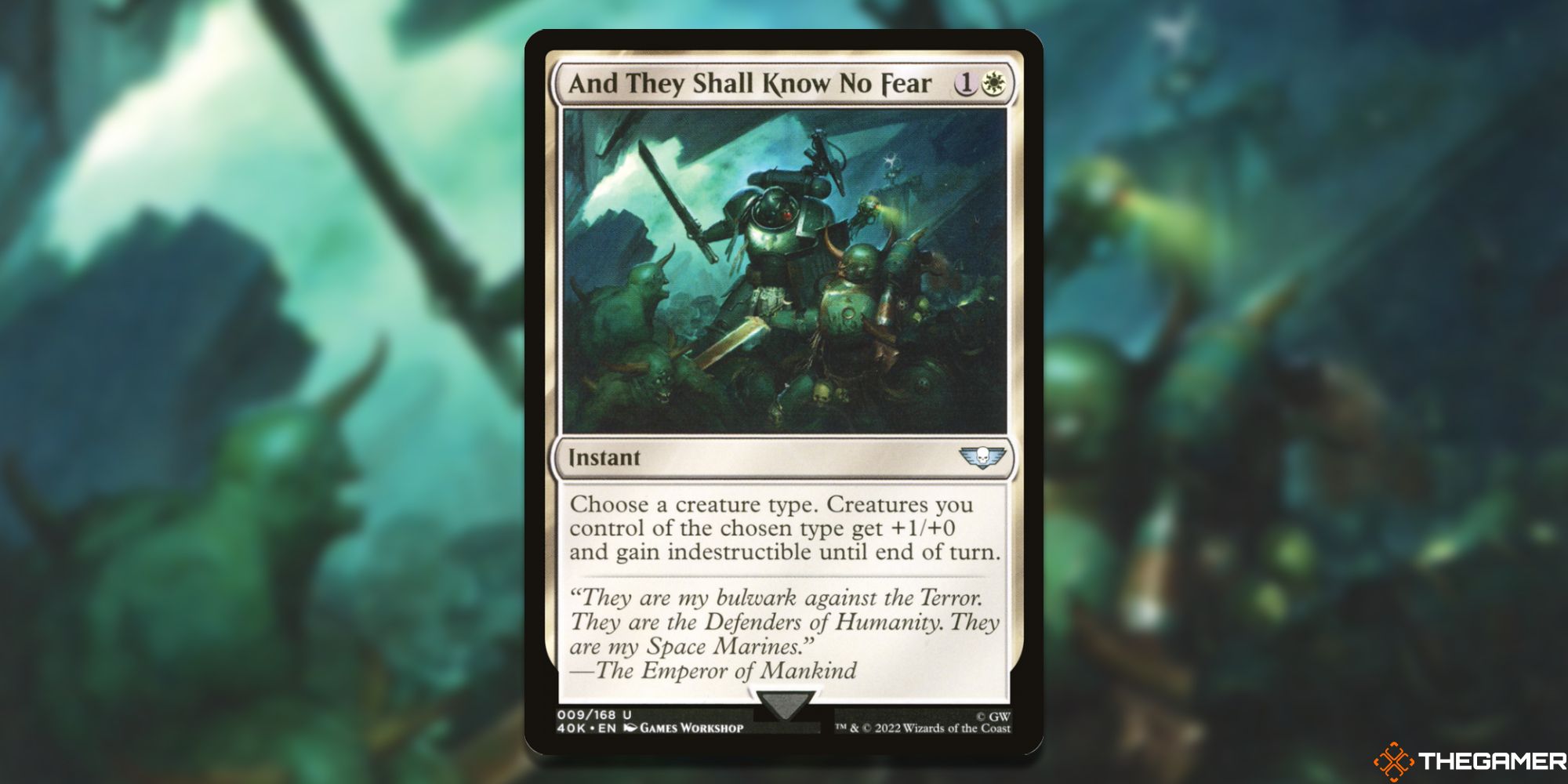 Most creature-based decks have one glaring weak point, their battlefield. Once all your Dinosaurs are subjected to a board wipe, you’ll likely be out of creatures to play. That’s why cards like And They Shall Know No Fear are vital in keeping your creatures alive and in play. And They Shall Know No Fear doesn’t just let your creatures dodge a board wipe, it can also be used to block an incoming attack. Giving your creatures indestructible and +1/+0 helps them trade up against your opponents while ensuring they stick around to clap back. 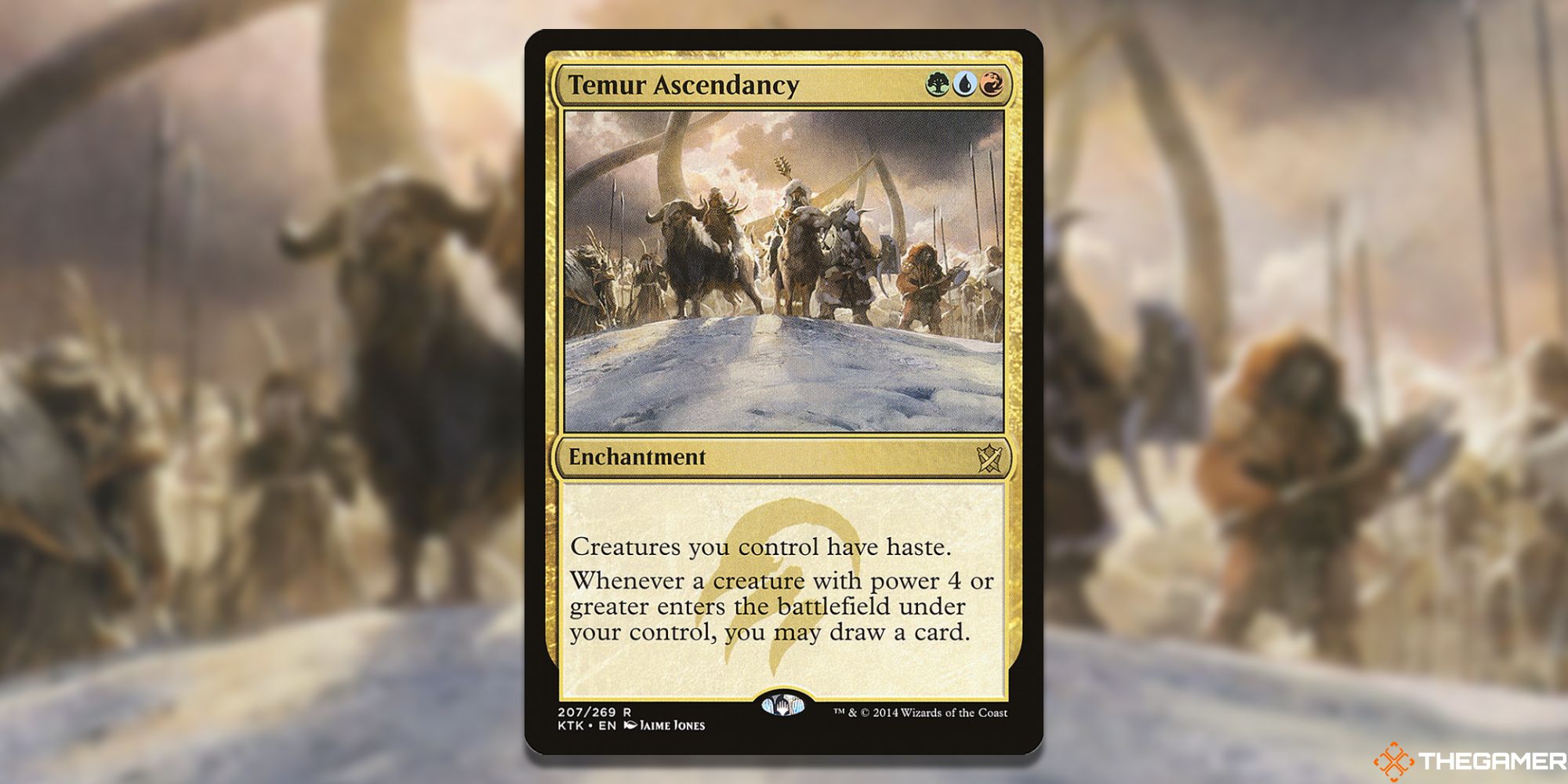 Depending on which commander you’re running, Temur Ascendancy can be a huge asset to your Dinosaur army. For just three mana, you give all your Dinosaurs haste, letting them attack in the turn you play them. As if that wasn’t enough, Temur Ascendancy draws you a card whenever you play a creature with power four or greater, refilling your hand and helping you dig for more Dinosaurs. The majority of Dinosaurs in Magic are fairly beefy, with lots of power to match their high casting costs, and Temur Ascendancy rewards you for playing them. 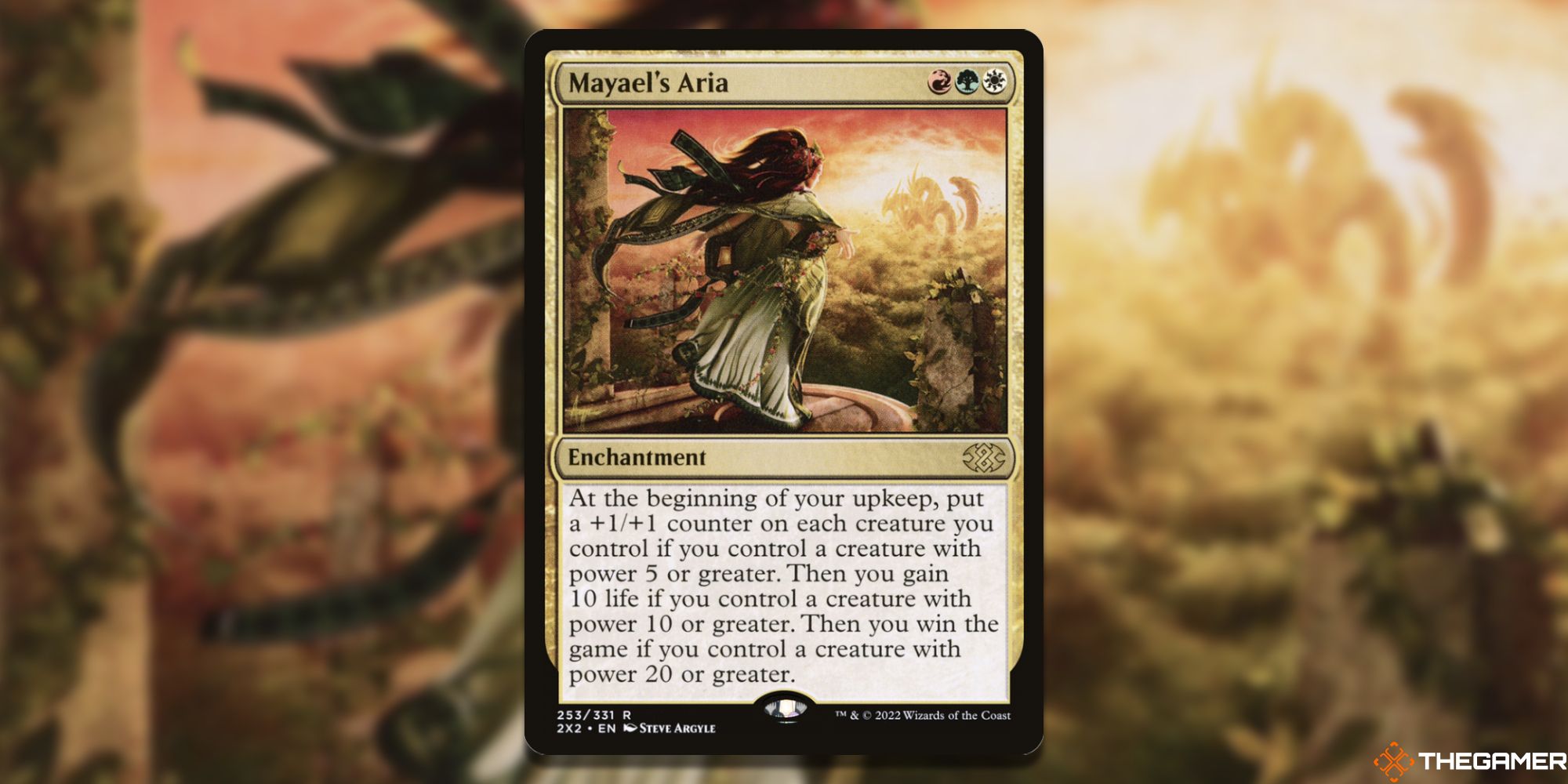 Another three-mana enchantment, Mayael’s Aria has three separate clauses that will trigger at the start of your turn. You do need a creature with power five or greater in play before you can start placing +1/+1 counters on your creatures. The next tier after a power five creature is one with ten power, gaining you an extra ten life.

While it might not happen often and might place a target on your back if you get close to reaching it, Mayael’s Aria does provide an alternate win condition if you are in an impossible situation against an opponent. 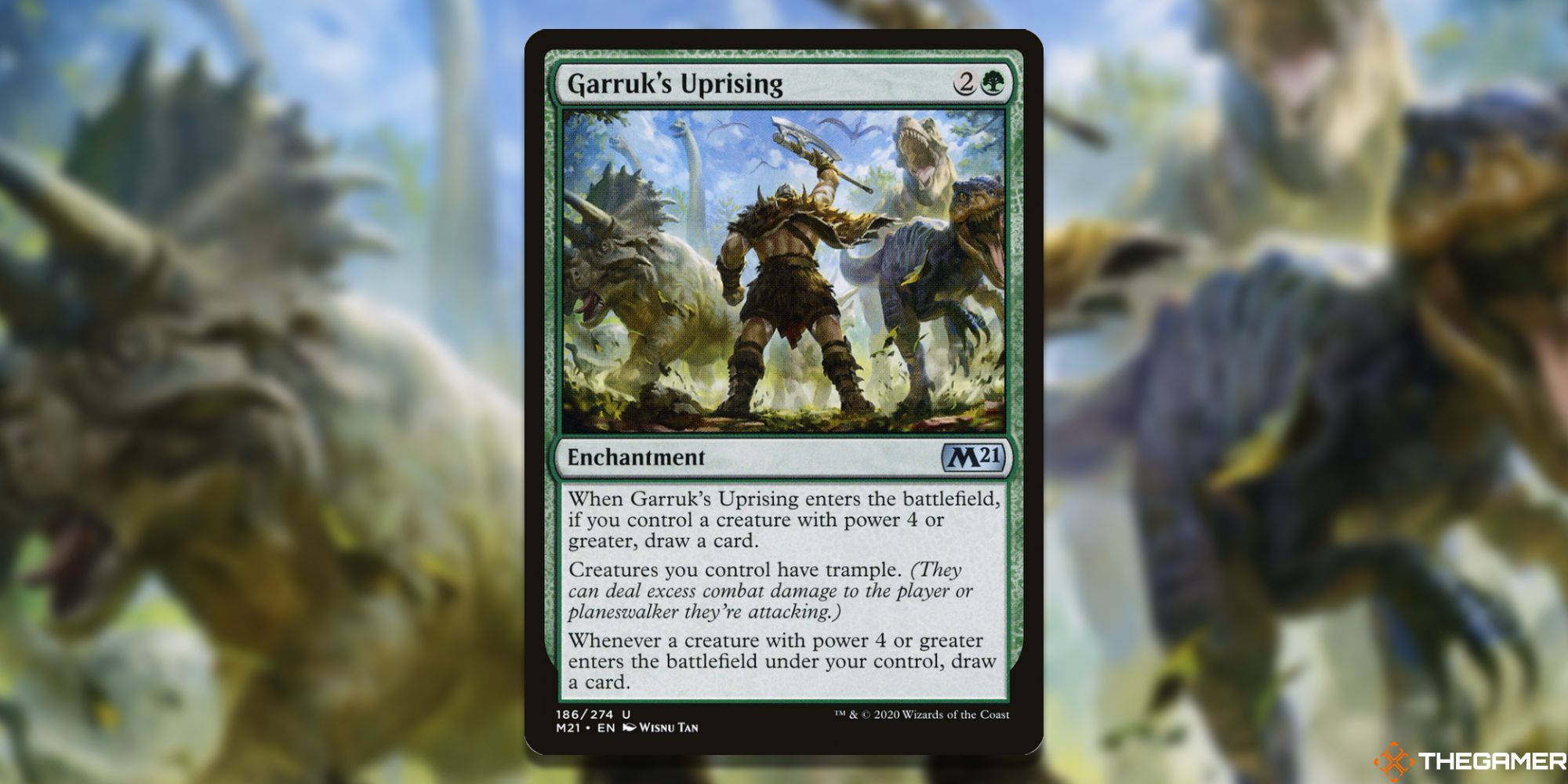 Garruk’s Uprising draws you cards and doesn’t stop as long as you keep playing creatures. This uncommon enchantment starts off by drawing you a card when it enters the battlefield, so long as you have a creature with power four or greater in play. Then, you keep drawing cards every time you play a creature with four or more power once Garruk’s Uprising is in play. Garruk’s Uprising comes with an incredibly powerful ability to give all your creatures trample, something that Dinosaur decks desperately need to send damage over your opponent's smaller blockers. 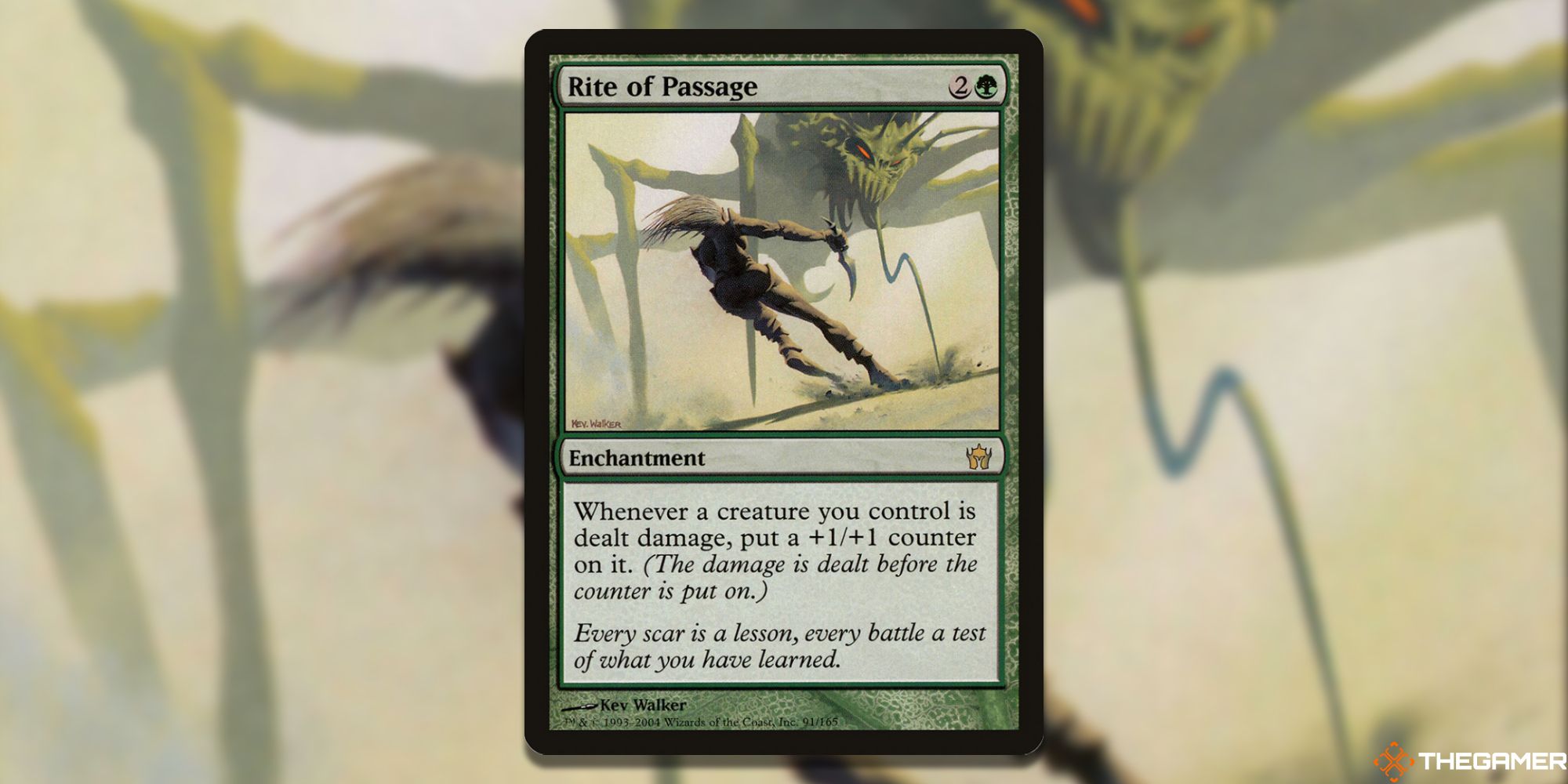 Rite of Passage feels like it was built specifically for Dinosaur decks, given the amount of synergy it has. On the surface, your creatures grow larger every time they survive combat or other types of damage, which is still pretty good, but playing Rite of Passage with a few other cards can turn your Dinosaurs into a huge threat.

Rite of Passage works particularly well when combined with other Dinosaurs that deal damage like Marauding Raptor, which deals 2 damage to a creature when it enters the battlefield under your control. It also combos well with another card on this list, Pyrohemia, turning every one point of damage into a +1/+1 counter. 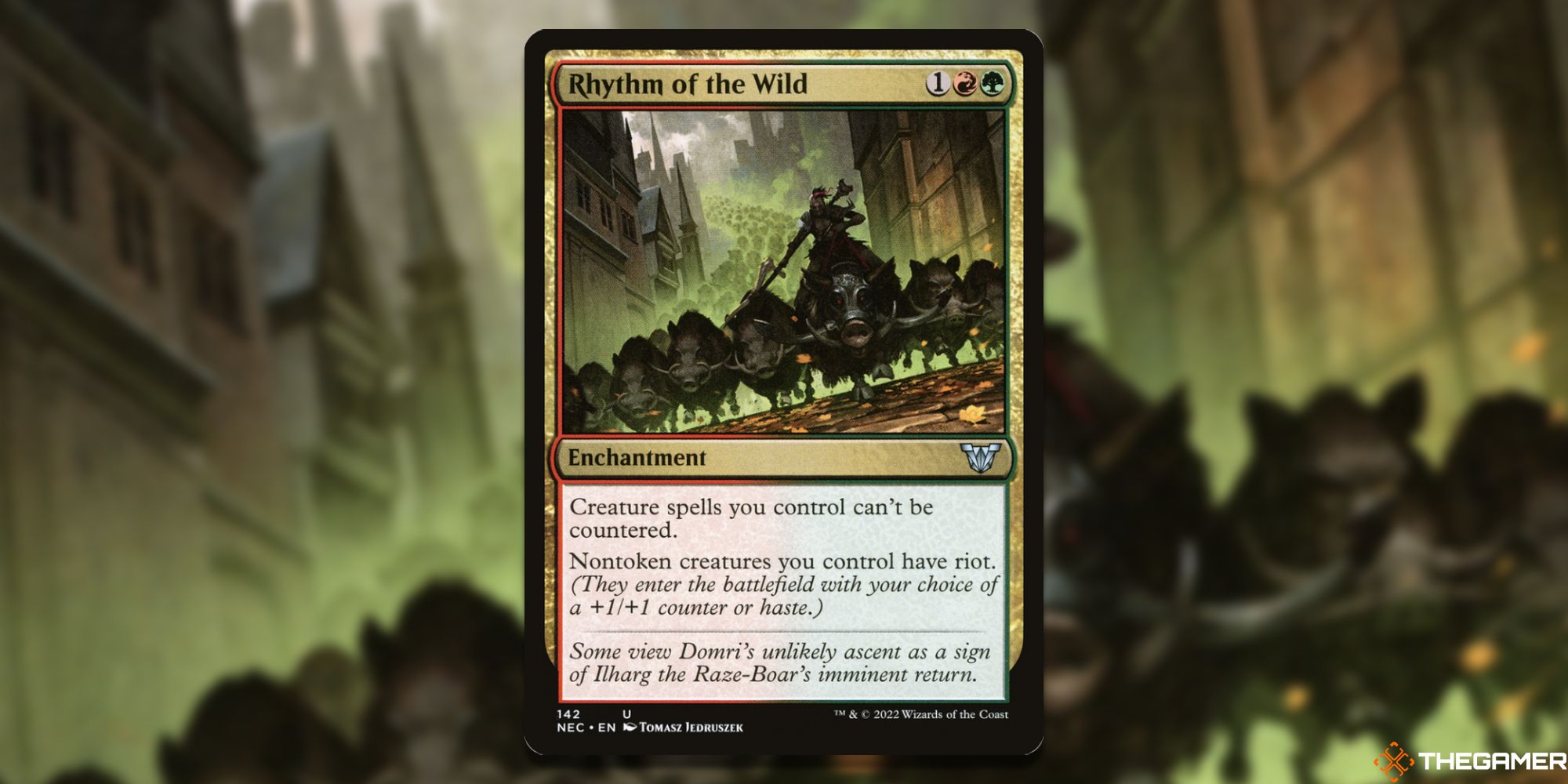 If you’re playing a Dinosaur-themed deck, you’re going to want to be attacking the turn they come out. With Rhythm of the Wild, you can give them either a +1/+1 counter or haste, either helping your Dinosaurs scale past your opponent’s creatures or letting them attack immediately. As an added bonus Rhythm of the Wild prevents your opponents from countering your creatures, which can be one of the most soul-crushing experiences in Commander. 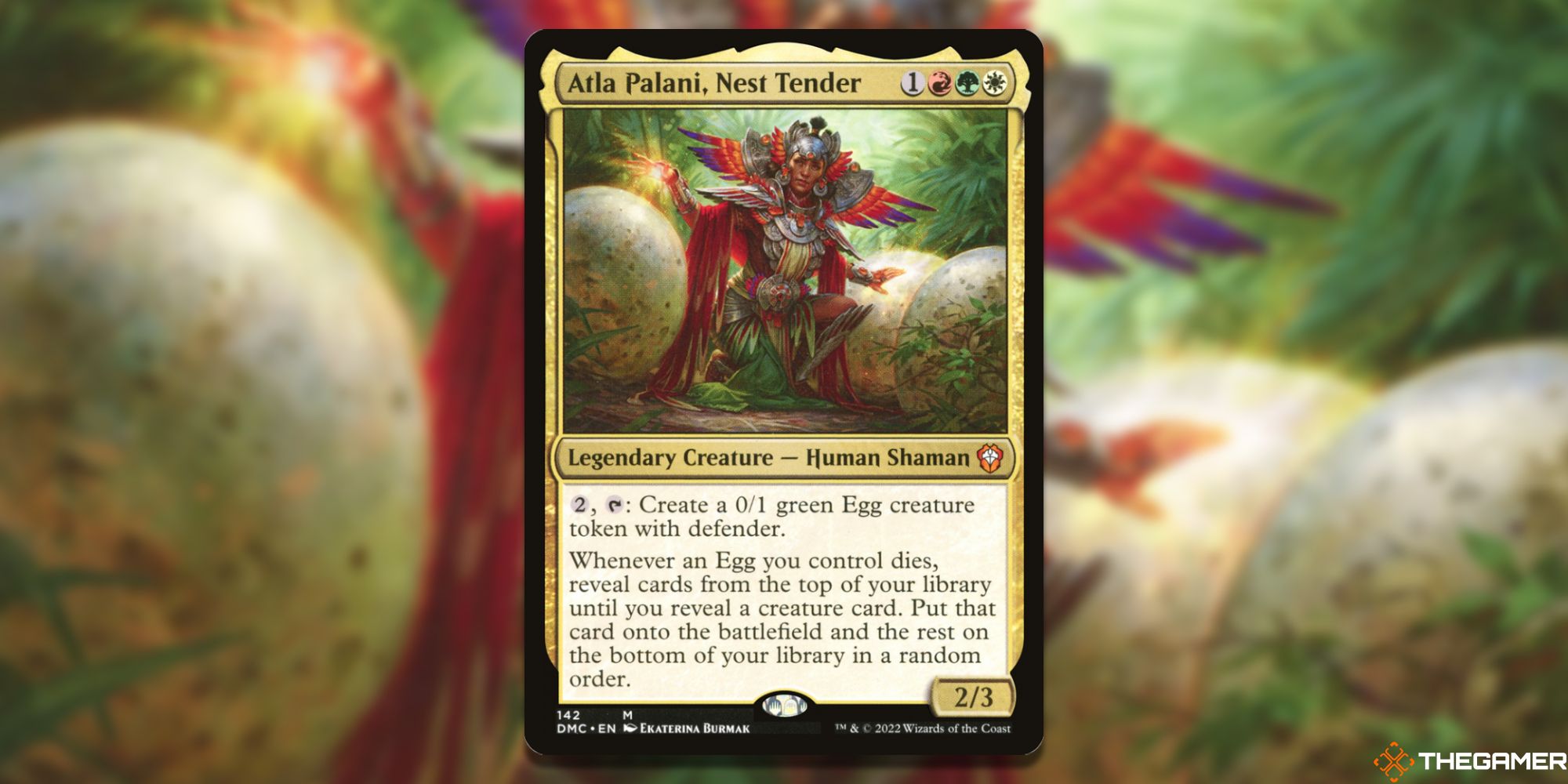 Often found in the Commander slot, Atla Palani, Nest Tender is a fun and sneaky way to get your Dinosaur cards into play for free. For just two mana you can start making Egg creature tokens. Then, once those tokens are destroyed you start revealing the top cards of your library until you find a creature and put it directly onto the battlefield. With cards like Sense’s Diving Top, you can manipulate the top three cards of your library to try and pick what Dinosaur you’re going to reveal first. 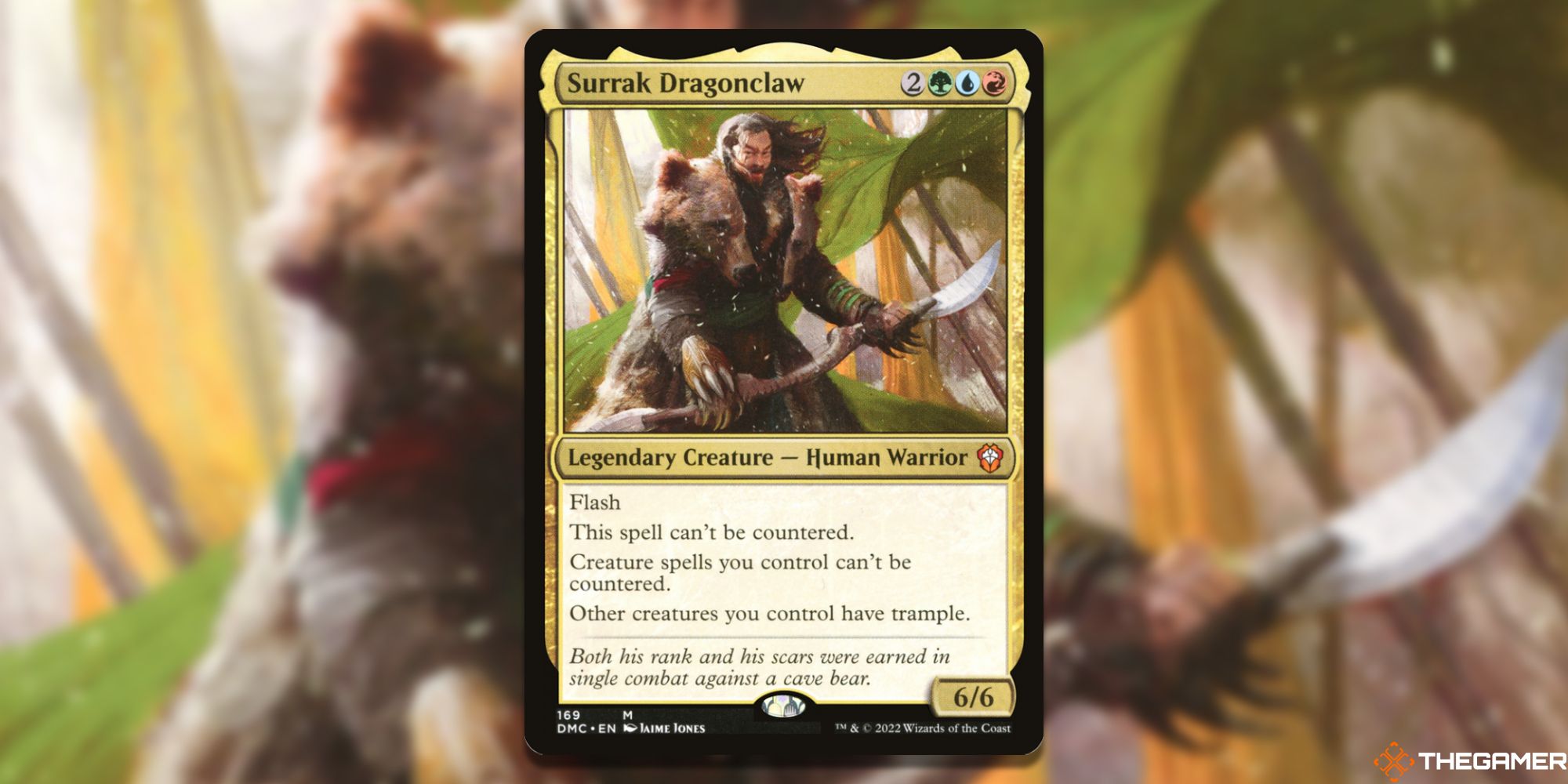 While Surrak Dragonclaw isn’t a Dinosaur, it does a lot of work to keep them safe. It combines the abilities of two cards on this list, Rhythm of the Wild and Garruk’s Uprising. With Surrak in play, none of your Dinosaurs can be countered, giving you the space to drop all your massive creatures safely. Then, with your creatures safely in play, they all gain trample, preventing your opponents from simply blocking them with a small 1/1 creature. 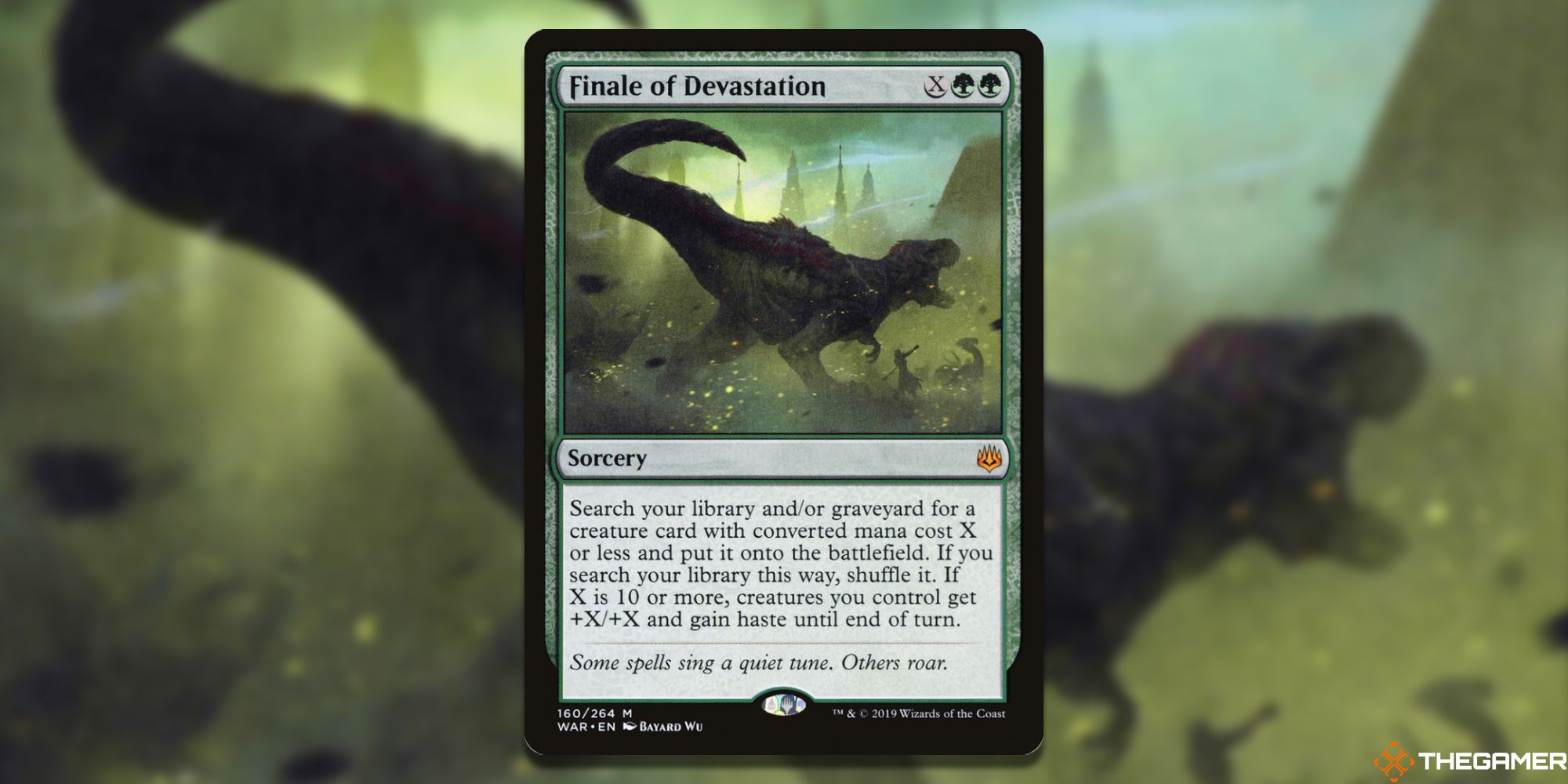 If you’re sitting on a bunch of mana and want to end the game in a turn, Finale of Devastation is one of the best cards for it. Finale of Devastation lets you search your library for a creature with a mana value equal to X, where X is the amount of mana you put into the spell’s cost, and put it directly into play. The real power is when you’re able to pump ten or more mana into it, buffing all your creatures and giving them all haste for the turn including the creature you searched your library for.