Home » News » Magic The Gathering: What Are Cycles?

One of the most underappreciated elements of Magic the Gathering's design are cycles. They help give sets an identity by linking together specific cards, or provide a solid mechanical foundation for the rest of the set to build upon.

They're not a mechanic like Adventure or Foretell (cycles are unrelated to the mechanic cycling), but knowing what cycles are can still help your understanding how Magic and help you to become a better player. With lots of different kinds of cycles already in the game, here is everything you need to know. 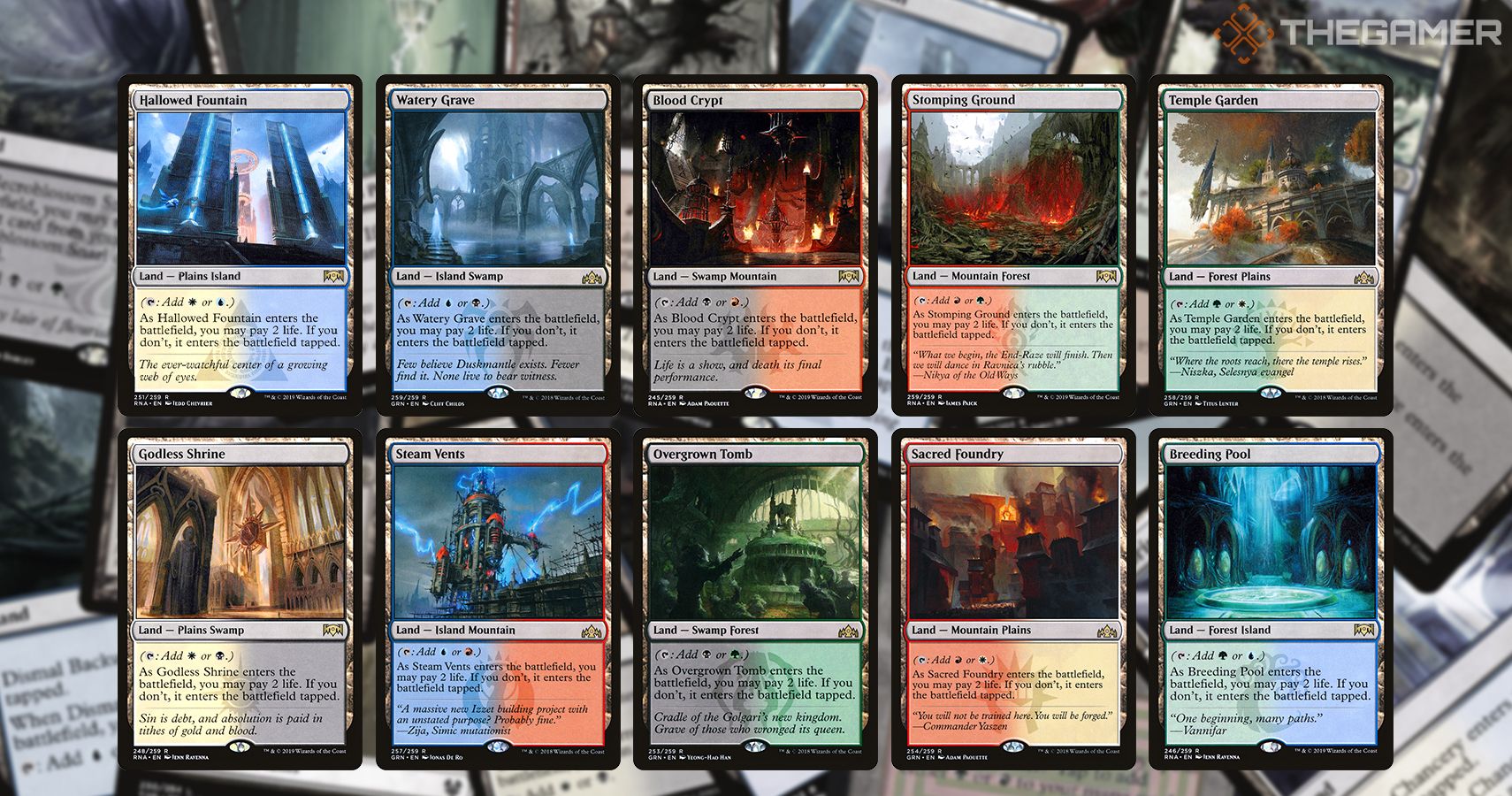 Cycles are individual cards that have some sort of connection with each other. The connection might be a mechanical or thematic similarity, while they differ along some axis of Magic's design, such as colour, rarity, creature type, abilities, or even power and toughness.

Cycles aren't a strictly-defined thing in Magic. Sometimes they can be cards that are identical in all but that one way (such as the Ravnican Signets and the colours of mana they produce), while other times it might be a lot more vague or uncomplete. A cycle doesn't have to have fully exhausted all potential variations of its theme to be a cycle, like how the Inscription cycle in Zendikar Rising only covers three of the five colours.

They don't even have to all belong to the same set – cycles are sometimes started in one, and then aren't finished until many years later. These are known as Mega- or Mega-Mega Cycles.

What Are Horizontal Cycles? 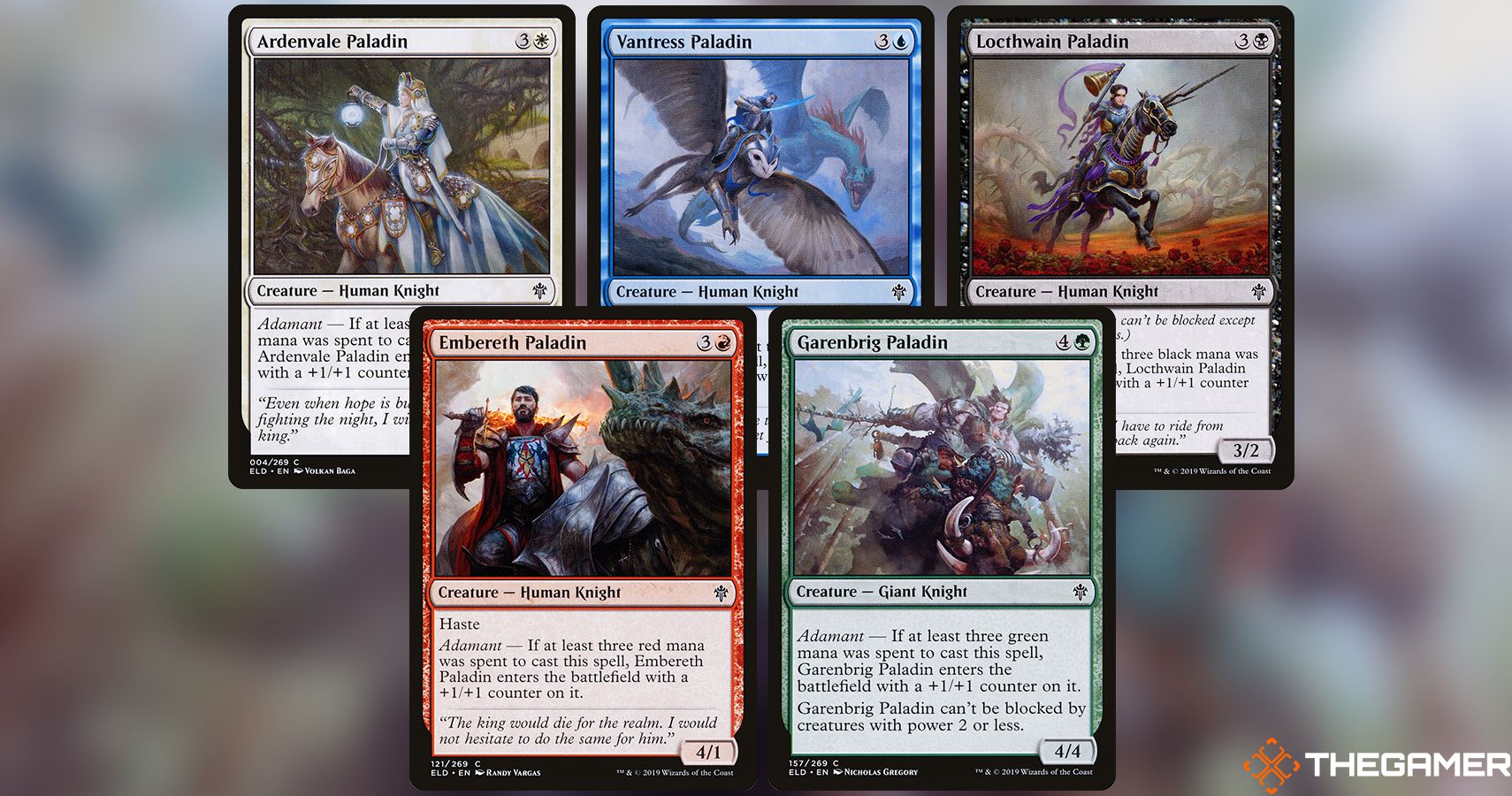 The most common type of cycle is a Horizontal Cycle. These are a group of cards that spread themselves across any number of the five colours of Magic, but still have some other kind of linked theme. For example, the Paladin cycle of Throne of Eldraine are a group of five Human Knights with the Adamant keyword, and includes the white Ardenvale Paladin, the blue Vantress Paladin, the black Locthwain Paladin, the red Embereth Paladin, and the green Garenbrig Paladin.

Horizontal cycles might use colour pairs (like the Ravnica Guildgates or the Strixhaven college Command spells), or even three or four colours in sets like Ikoria: Lair of Behemoths or Guildpact. Ikoria's Apex cycle featured five creatures (Brokkos, Illuna, Nethroi, Snapdax, and Vadrok) who each had Mutate and occupied their own three-colour colour identities, while Guildpact's Nephilim cycle had five Nephilim creatures who each had four of the five colours, each missing a different one.

By far the most common horizontal cycle, though, are the humble basic lands. Plains, Island, Swamp, Mountain, and Forest are five cards who each do the same thing (make mana), with the key difference between them being the colour of mana they produce.

What Are Vertical Cycles? 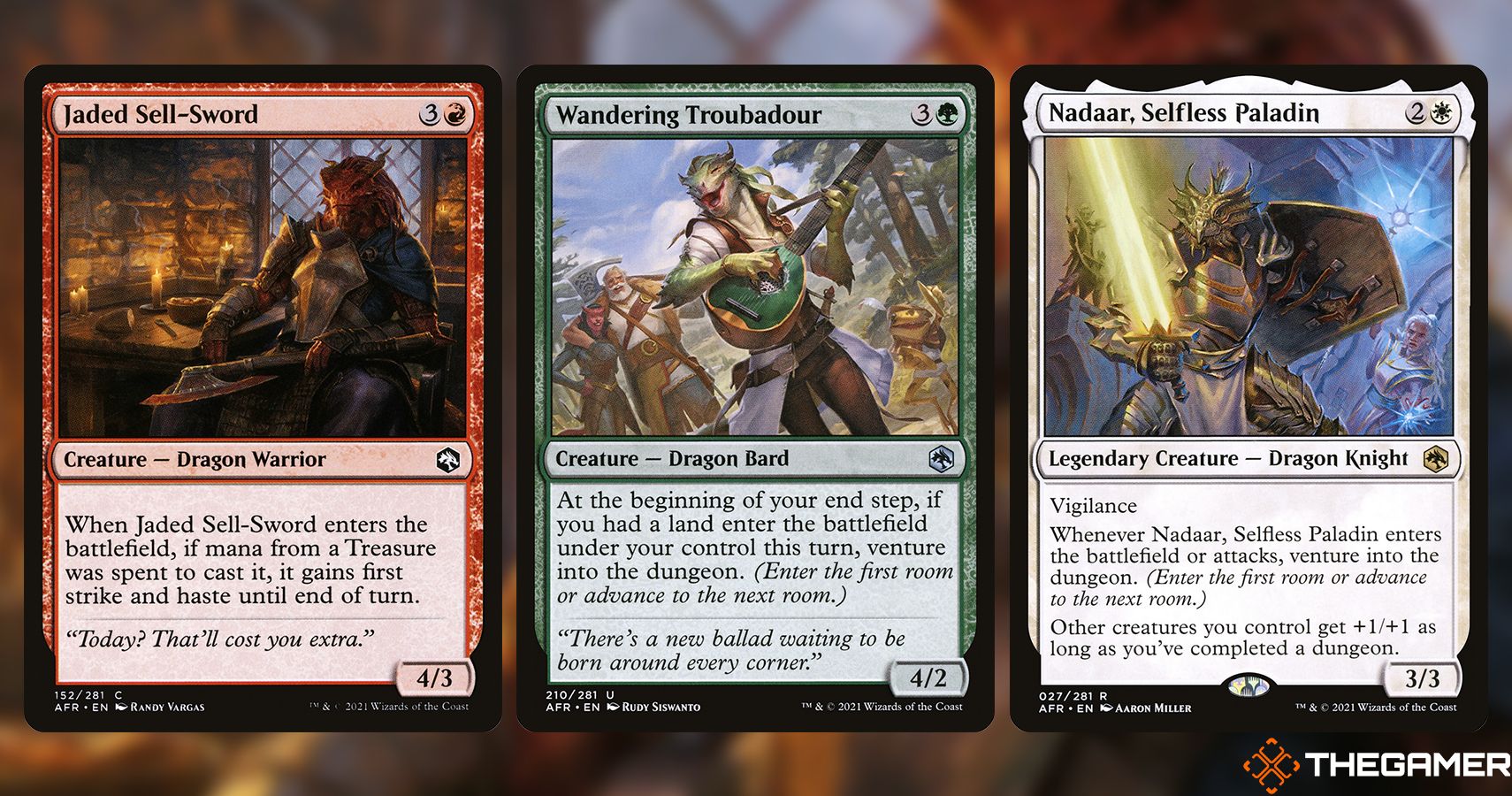 Vertical cycles are similar cards that use rarity to differentiate themselves instead of colour. These are less common than horizontal cycles, but still happen fairly frequently.

Vertical cycles can be more difficult to identify, and sometimes may feel completely unrelated from each other. In Dungeons & Dragons: Adventures in the Forgotten Realmjs, Nadaar Selfless Paladin, Wandering Troubadour and Jaded Sell-Sword are a vertical cycle simply because they're dragons without flying.

Other times the cycle might be clearer. Magma Opus, Creative Outburst, and Elemental Masterpiece from Strixhaven: School of Mages are a mythic rare, uncommon, and common red and blue instant or sorcery that can be discarded to make a treasure token. 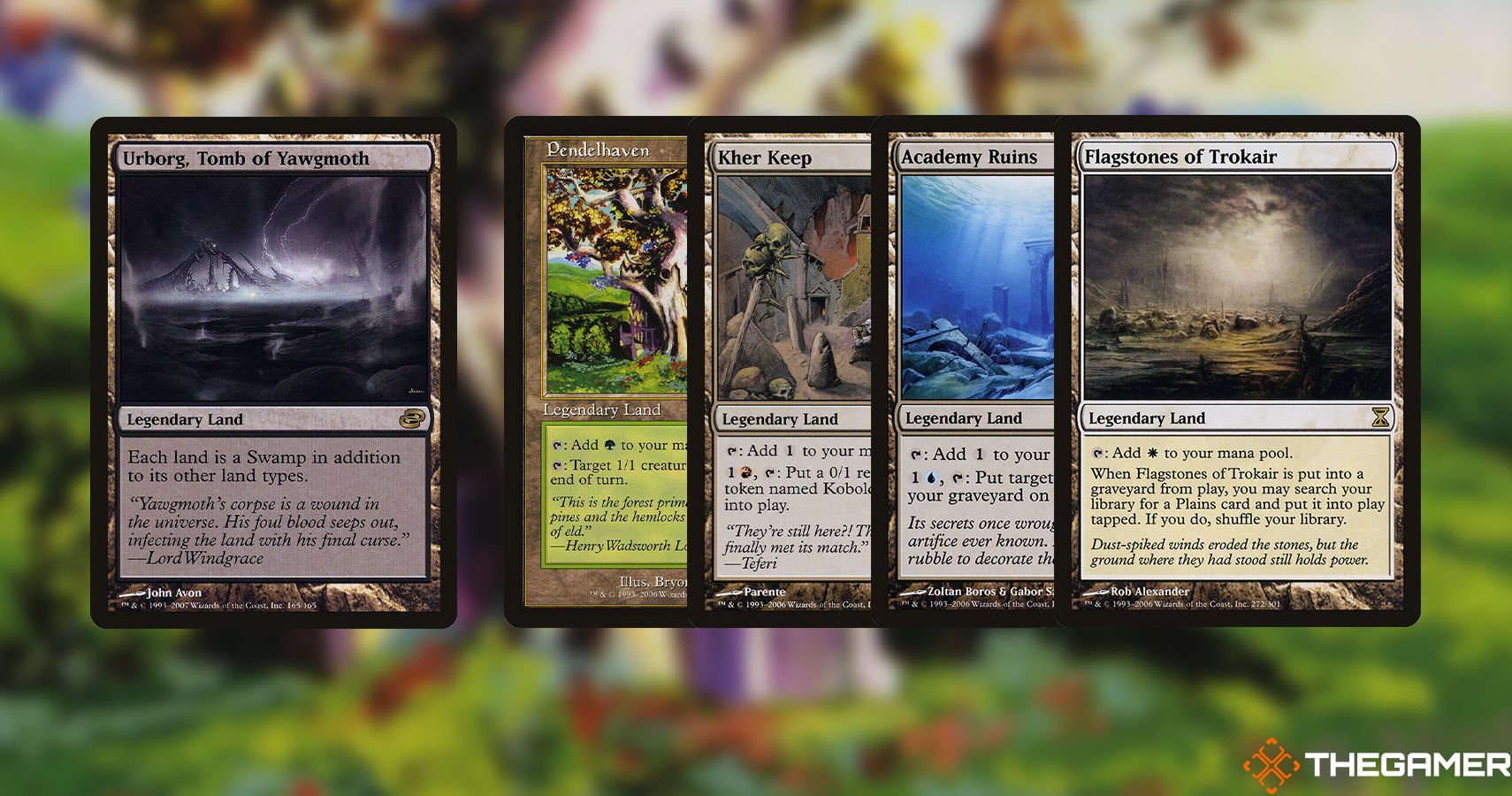 As mentioned, sometimes a cycle might be started in one set and finished in another. Depending on which sets are involved, these kinds of cycles are called Mega and Mega-Mega Cycles.

A Mega Cycle is a cycle that is started and finished within the same 'block' (an older term describing linked sets designed to be drafted together, like the Kamigawa sets Champions of Kamigawa, Betrayers of Kamigawa, and Saviours of Kamigawa). A good example is the Dominarian lands from the Time Spiral block (Time Spiral, Planar Chaos, and Future Sight): Flagstones of Trokair, Academy Ruins, Kher Keep and Pendelhaven were all introduced in Time Spiral, before Planar Chaos completed the cycle with Urborg, Tomb of Yawgmoth.

Blocks aren't a thing anymore, though, and so the chances of getting any new mega cycles is very slim. Mega-Mega Cycles, on the other hand, have cycles that are completed in a completely different block to the one they started in, which means they can still happen (and do more often now that every set is considered its own block). In Avacyn Restored we got Avacyn, Angel of Hope, Bruna, Light of Alabaster, Gisela, Blade of Goldnight, and Sigarda, Host of Herons, each costing two white mana and another colour. The cycle wouldn't be completed for another eight years, when Liesa, Shroud of Dusk was added in Commander Legends (and then Liesa, Forgotten Archangel in Innistrad: Midnight Hunt). 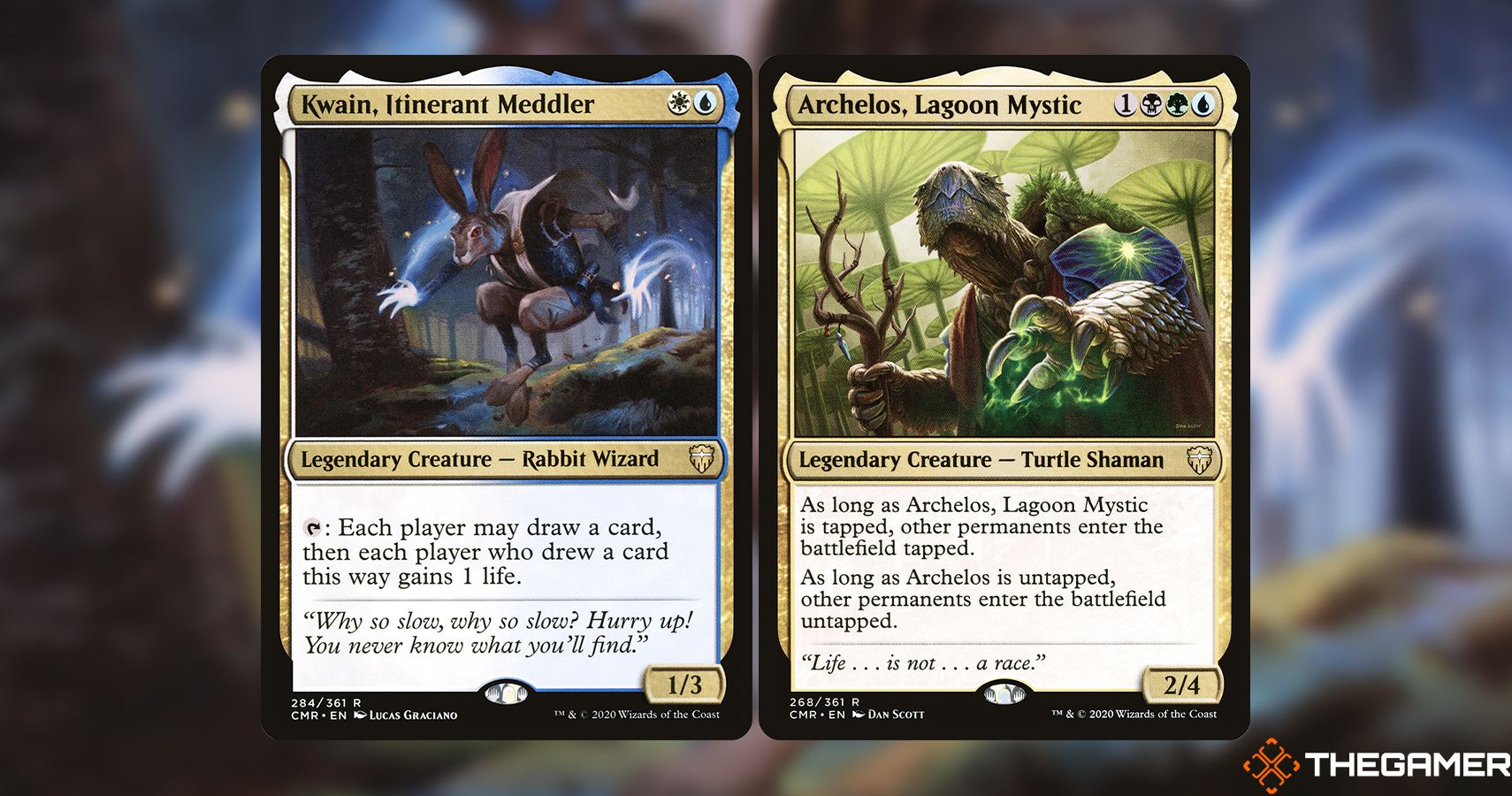 Despite only being two cards, pairs are still considered cycles by most of the community. These ones can be a lot trickier to pin down, as only two cards makes identifying a pattern between them more difficult.

However, pairs are also sometimes some of the most thematically satisfying cycles. Archelos, Lagoon Mystic and Kwain, Itinerant Meddler from Commander Legends are a pair who, on the face of it, are completely unrelated – they only share one colour, are different creature types, and do very different things. And then you realise they make up a riff on the old fable The Tortoise and the Hare, and it all comes together.

Note that pairs and partners aren't the same thing. Partners have a more direct and clear mechanical dependence on eachother, and so Magic doesn't tend to consider pairs like Shibraz the Skyshark and Brallin, Skyshark Rider as a cycle.

What Is The Point Of Cycles? 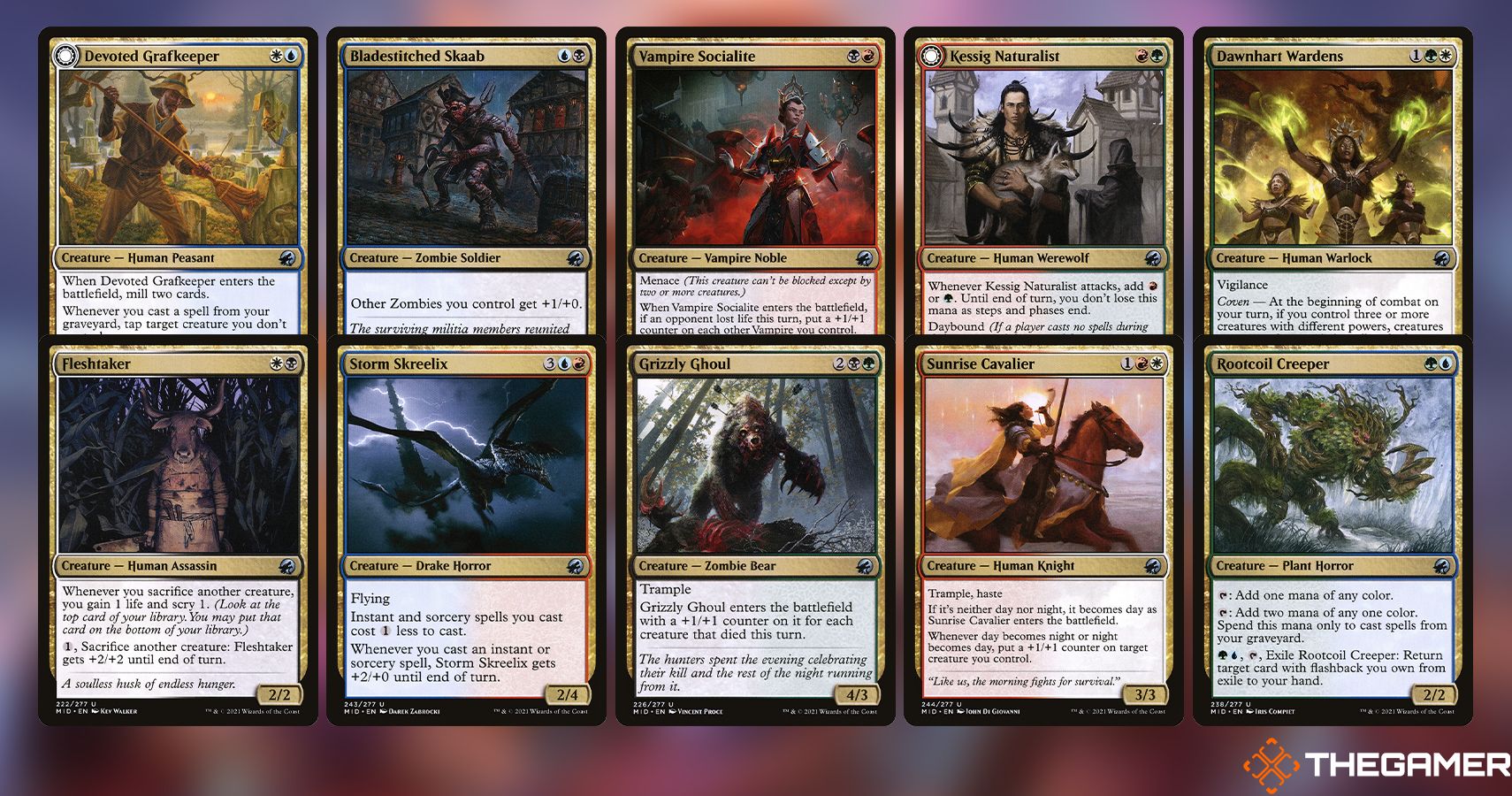 Cycles most cycles have no mechanical impact on the game, and you're not really expected to run all the pieces of a cycle in one deck. There are exception, of course, such as Urza's Mine, Power Plant and Factory making up the powerful 'Tron' archetype.

But cycles still do serve a purpose. They help build the themes of the set, like the Time Spiral land cycle showing how the time rifts were destroying Dominaria, or the Eldraine Paladin cycle highlighting the style and nature of each of the courts. Cycles give Wizards a chance to give the player a wider look into a certain aspect of the world and explain something that would be difficult to do on a single card.

They can also work as signposts for that set's draft archetypes. By having a cycle, Wizards can showcase what each colour is supposed to do in that set. They provide a starting point for someone drafting a set – pulling a Baldestitched Skaab in Innistrad: Midnight Hunt suggests blue and black are the colours of Zombies in the set, while pulling a Dawnhart Wardens points you to Humans instead.

A PVP Crash Bandicoot Game Is Happening, Sounds Like A Bad Idea

The Story Of Seasons: Friends Of Mineral Town Remake Is Coming To PC And Switch