Home » News » Magic The Gathering: What Are Silver-Border And Acorn Cards?

Parody sets have been a long-running thing in Magic the Gathering, ever since the launch of Unglued in 1998. These cards are whackier than normal, using new mechanics that often play on things outside the game to make an unpredictable and very different experience.

With such weird cards being printed, Wizards of the Coast has had to find ways to make sure people don't accidentally put a card with Denimwalk (can't be blocked by a player wearing denim) or Art Menace (can only be blocked by creatures with two or more characters in their art) into their normal Magic decks. For that, we've got silver borders and the brand new 'Acorn cards', recently announced to be coming in next year's Unfinity. Here is everything you need to know about them, including what formats you're allowed to play with them in.

What Are Silver Border Cards? 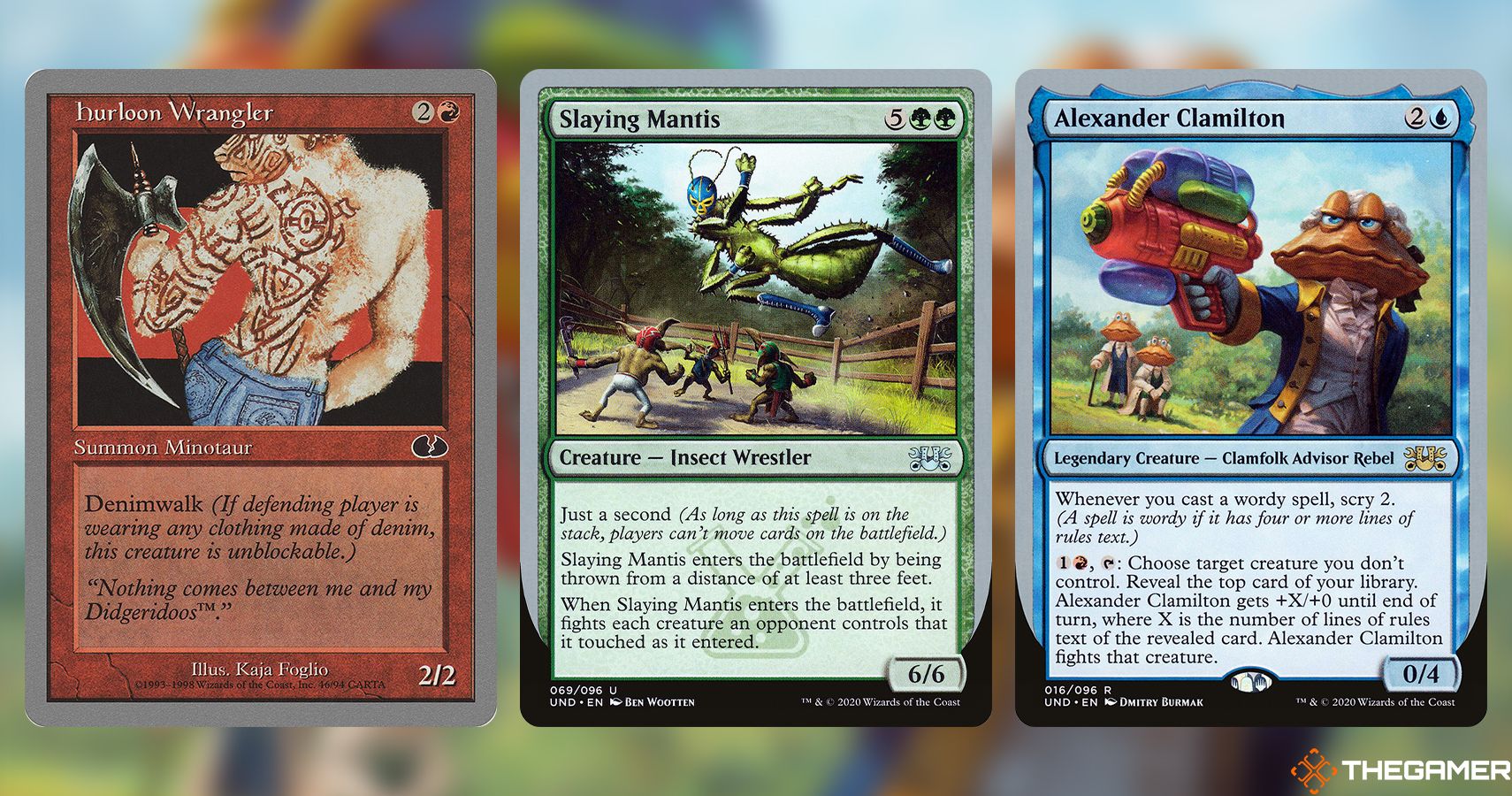 Up to Unsanctioned in 2020, all cards in Un-sets (Unglued, Unhinged, Unstable, and Unsanctioned) were printed with silver borders, to differentiate themselves from main, non-parody Magic cards. A number of commemorative cards have also been given silver borders, like the yearly Holiday cards given out by Wizards of the Coast.

More than an aesthetic choice, though, silver borders have a specific meaning. Any card with a silver border can't be played in any Magic format outside of Un-set constructed or Un-set draft (in other words, unless you're explicitly playing with silver-bordered cards, they're not allowed). This means you can't take something like an Alexander Clamilton or an Ass Whuppin' into Standard, Modern, Vintage, Legacy, Pauper, Pioneer, or any other format.

There is one exception to this rule, though: Commander. Though silver-bordered cards are banned in Commander by default, part of the format's appeal is in allowing you to play with cards if the table agrees to it. Many people make silver-bordered Commander decks and have fun with them, just make sure you've cleared it with your playgroup before bringing out your Our Market Research Shows That Players Like Really Long Card Names So We Made This Card To Have The Absolute Longest Card Name Ever Elemental (an actual card that exists).

The only colour borders legal in the main Magic formats are black, the most common, and white, which was used in older Magic sets to denote if a card was a reprint.

What Are Acorn Cards? 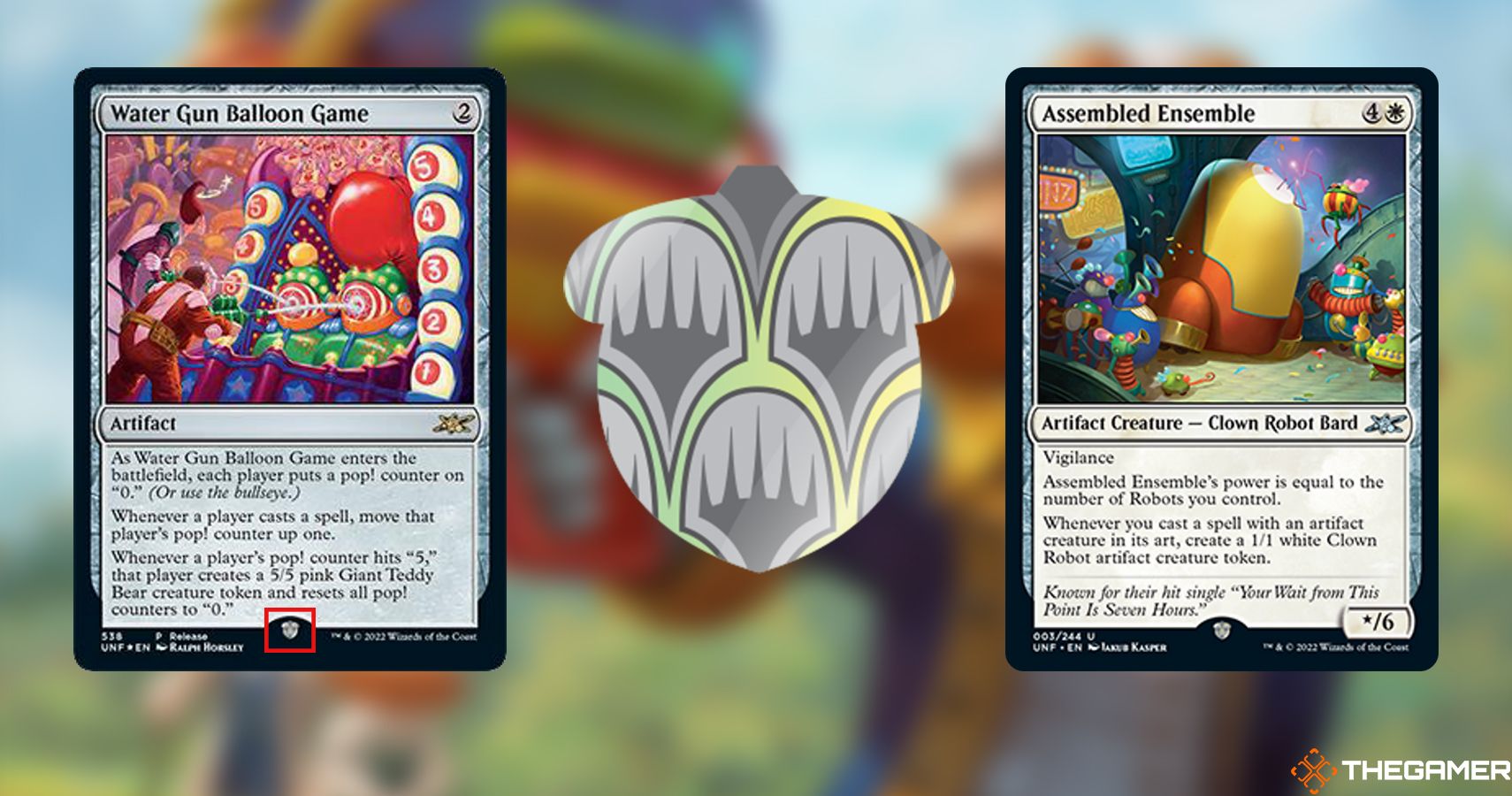 With the release of Unfinity in 2022, Wizards is trying something very different. Instead of having the entire set have silver borders, there will be a mix of black-border cards legal in Commander, Vintage, and Legacy, and "Acorn Cards", which are not.

Any card with an acorn-shaped holo stamp at the bottom is, functionally, a silver-bordered one. Just like silver-bordered cards, these are considered too zany for normal Magic and are banned from most formats. Any older Un-set cards being reprinted in Unfinity will have their silver borders replaced with the acorn stamp, just like Water Gun Baloon Game from Unhinged.

For all intents and purposes, acorn cards are the exact same as silver-bordered cards. Any older card that specifically references silver borders in its text, like Border Guardian or Gimmie Five will be errata'd to also include acorn cards. 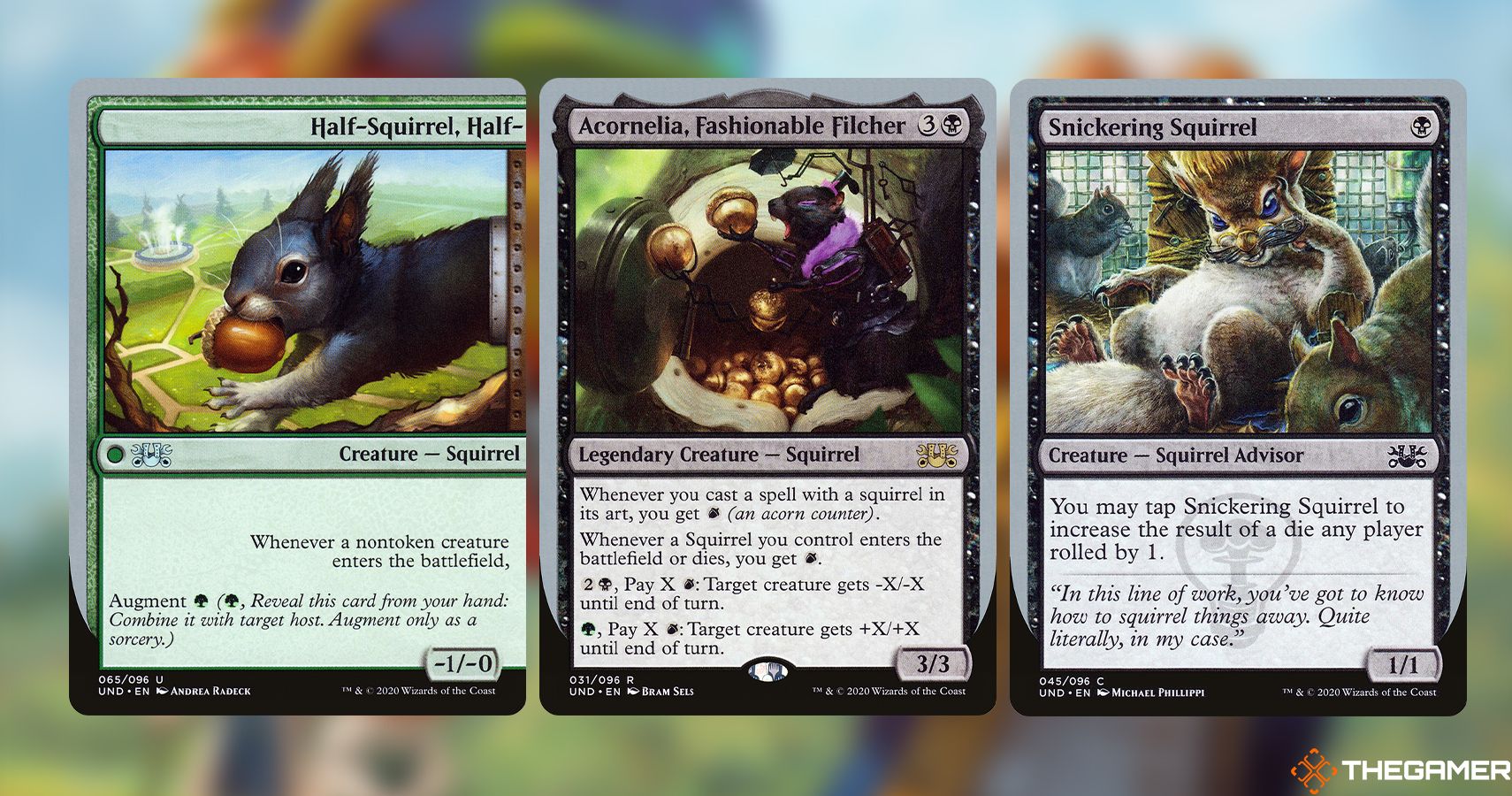 Although acorns may feel like a random choice to denote a formerly silver-bordered card, squirrels have been the unofficial mascot of Un-sets.

In Unstable we had the card Earl of Squirrels, which had the Squirrellink keyword to make Squirrel tokens whenever it dealt damage to a player, and the artifact Steel Squirrel, while Unsanctioned had the Half-Squirrel, Half- augmented creature, Snickering Squirrel, and the squirrel Commander Acornelia, Fashionable Filcher – who made acorn counters whenever a card you cast had a squirrel in the art.

Squirrels are a hallmark of Magic's lead designer, Mark Rosewater. Un-sets are primarily his creation, and he has led the design on every single one, including Unfinity. Because of that, acorns can be seen as an oblique reference to him as well.