Home » News » Minnesota Is The Dark Souls Of America

Hello, faithful readers, enjoying your balmy spring weather? I certainly was – until Mother Nature decided we were due another reminder of what state we live in. I’m writing today’s column from home today, because we are once again buried under a foot of snow and the office is closed. I don’t want to exaggerate the situation, but a penguin delivered my mail today! I tried to ride a tauntaun in to work, but it collapsed in my front yard! My freezer is collecting unemployment checks! That last one doesn’t even make sense conceptually, but I don’t care because it’s snowing in April and the old rules don’t matter anymore!

It’s easy to rag on Minnesota’s weather, but the truth is I love this crazy state. I love actually having all four seasons, even if their timing is a little super-duper wonky. It certainly beats the Groundhog’s Day-like weather monotony of California (also, the massive fires), or decorating a palm tree for Christmas. Minnesota is for nature lovers, and the older I get, the more I appreciate being able to unplug from our internet overlord and be surrounded by trees and parks and weather and wild turkeys (yes that’s a thing). But appreciating nature also means solemnly acknowledging its ability to kick our assess anytime it pleases.

In this regard, Minnesota is remarkably tricky, always coming up with innovative new ways to torture test us during winter. When I was kid, Minnesota winters couldn’t wait to just dump a ton of snow on us in November. I even remember trick or treating through the snow on Halloween one year. I was set to go as Frankenstein, but my block head was made out of cardboard and colored with a black magic marker, which wouldn’t have stood a chance against the wet, slushy precipitation (and yes I know it’s technically Frankenstein’s monster, but I already told you the old rules don’t matter anymore so SHADDUP!). Thankfully, my mom came up with an ingenious solution: a protective shower cap, towel, and soap-on-a-rope turned me into Frankenstein…taking a bath. The potential disaster of a soggy-headed Frankenstein was instead replaced by a dull din of embarrassment – what the hell is Frankenstein taking a bath for anyway? In his winter jacket much less! Is he some sort of extreme never-nude? It makes no sense, ma! But I guess conceptual incongruencies don’t matter when it snows in October, either.

In recent years, Minnesota’s winters have taken longer to get going – having snow on the ground at Christmas feels like a 50-50 shot now. But not even climate change can stop Minnesota’s frozen fury! It just delays it a little. Secretly, I’ve always delighted in the naïve optimism of my nonnative co-workers and out-of-state interns when February rolls around and they think winter is more or less done. That’s what Minnesota is banking on! Just when you think it’s over – or actually about three weeks after you think it’s over – this state hits you in the face with another metric ass-ton of fresh powder. Suffice it to say, it even got me good this year.

I didn’t wear a jacket to work on Monday – I even rolled down my car windows on the way to the office! When I got home, my wife and I walked a few blocks to a nearby park and played freaking TENNIS. We laughed about how we’ll have to wear shorts next time because it’s so nice out and we’re both so bad at tennis that running down errant shots was really working up a sweat. Turns out we’re also bad at checking our weather apps, because two days later I looked out my window in the morning and saw this. 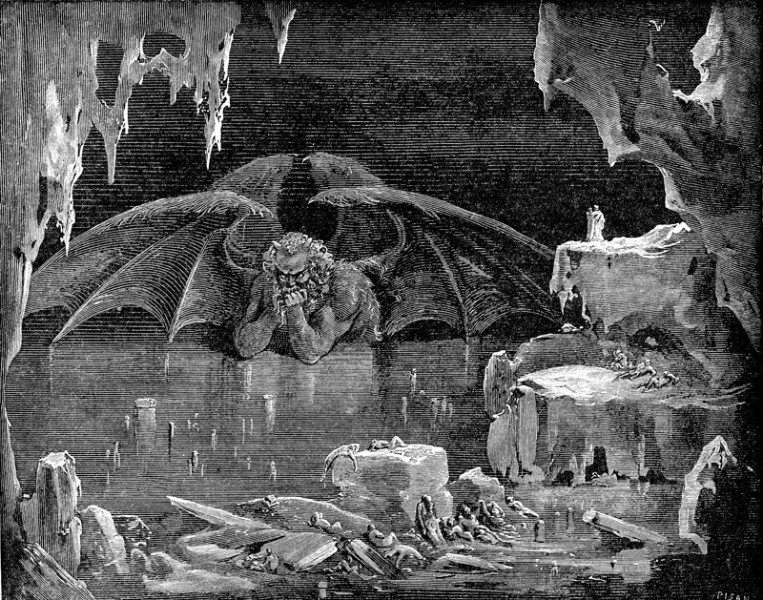 Well okay, maybe not exactly that, but pretty damned close! Winter is back! We just got over winter! How is it back already?! Did I reverse-hibernate like some kind of screwed-up Bizarro bear? Wait, would that just be a polar bear?

If you’re still waiting for me to tie all this back to video games somehow, forget it – it’s too damn cold! I already had to trudge out into the icy tundra to take that picture for you (the header image, not frozen Satan), and the blizzard-force winds blew a bunch of snow up the back of my shirt! And just to once again drive home how absurd all this is, after my wife and I got done playing tennis two days ago, we stopped at Dairy Queen for BLIZZARDS. It’s like the Lincoln-Kennedy coincidences, only COLDER.

Oh, fine – just so I can say I did my job and collect my paycheck, here it is: Like Dark Souls, Minnesota has a way of continually crushing you with its sheer power and apathy for your very existence, and it’s up to you to glean some kind of deeper meaning out of your perseverance and continued survival. Also like Dark Souls, I will crawl out of my home when all this snow finally melts and yell “Praise The Sun!” until the neighbors call the cops.

Enjoy your spring weekend – or, if you also live in Minnesota, stay warm.

Funny To A Point is Jeff Marchiafava’s column that celebrates the random, humorous, and downright stupid things that make gaming so much fun. It runs bi-weekly on Fridays.

GreedFall 2 Is Inspired By Knights Of The Old Republic