The Obscura Operation Commander deck features Kamiz, Obscura Oculus as the commander, which is one of the best cards with Connive from Streets of New Capenna. While The Obscura color combination (blue, black, and white) is more commonly seen with a control deck, Obscura Operation is more of a midrange deck that relies on creatures to win the game.

Because of its reliance on creatures and the fact that it boasts 22 creatures with some kind of effect upon dealing damage, a few of the cards being recommended are looking at adding extra turns. Kamiz will remain the Commander because he’s the best overall choice for what you will want this deck to do. Which is keeping Connive as a focal point and profiting from the damage effects your creatures have. 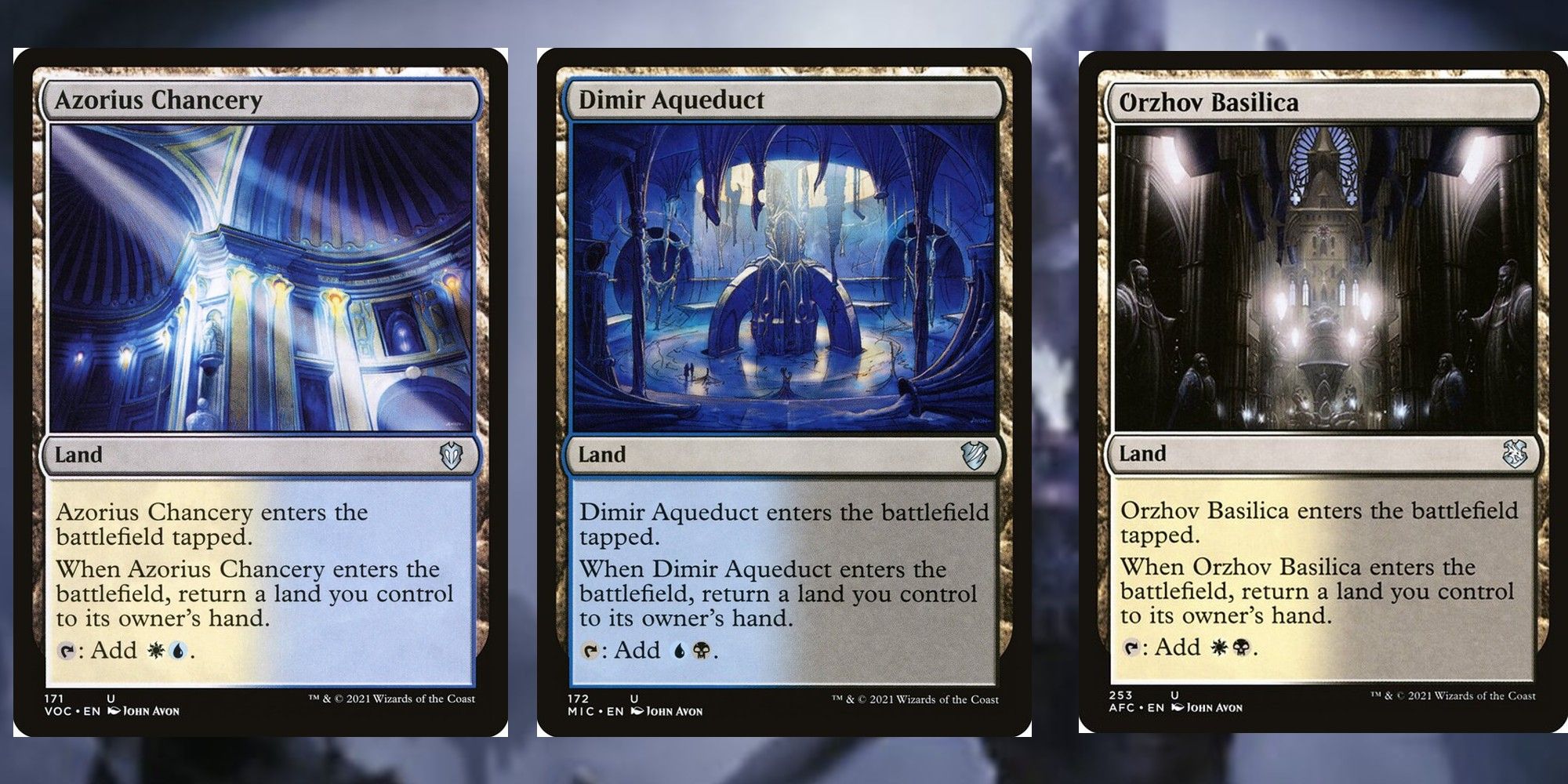 It’s hard to talk about upgrading a deck without speaking on its manabase. Some of the best lands to add to this deck will be the bounce lands from the original Ravnica block. They come into play tapped and require you to return a land in play to your hand, but once you untap with them, they produce two mana for the price of one. Chancery gives you a blue and white, Aqueduct produces a blue and black, and Basilica grants you black and white mana.

Pro tip: tap a land in play for mana before returning it to your hand. 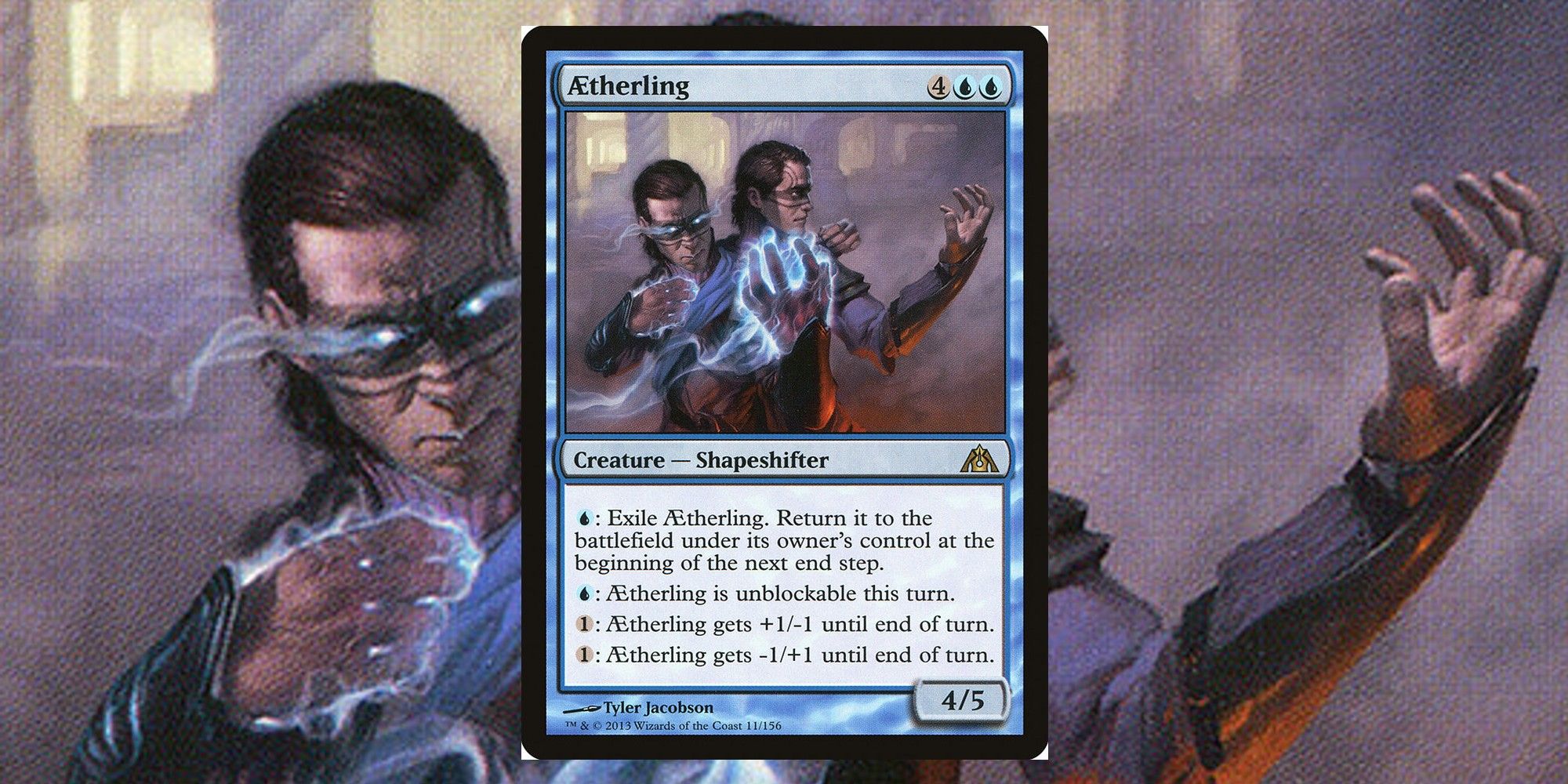 Aetherling is an excellent creature to have work with Kamiz because he’s easily getting damage in. For a single blue, you can make Aetherling unblockable. And for extra measure, you can pump him multiple times for optimal damage — even more if you used Kamiz’s Connive ability on him.

Also, he is great for blocking with his high defense and ability to pump. If your opponents try to remove him from the field, good luck because there’s an ability for that too. 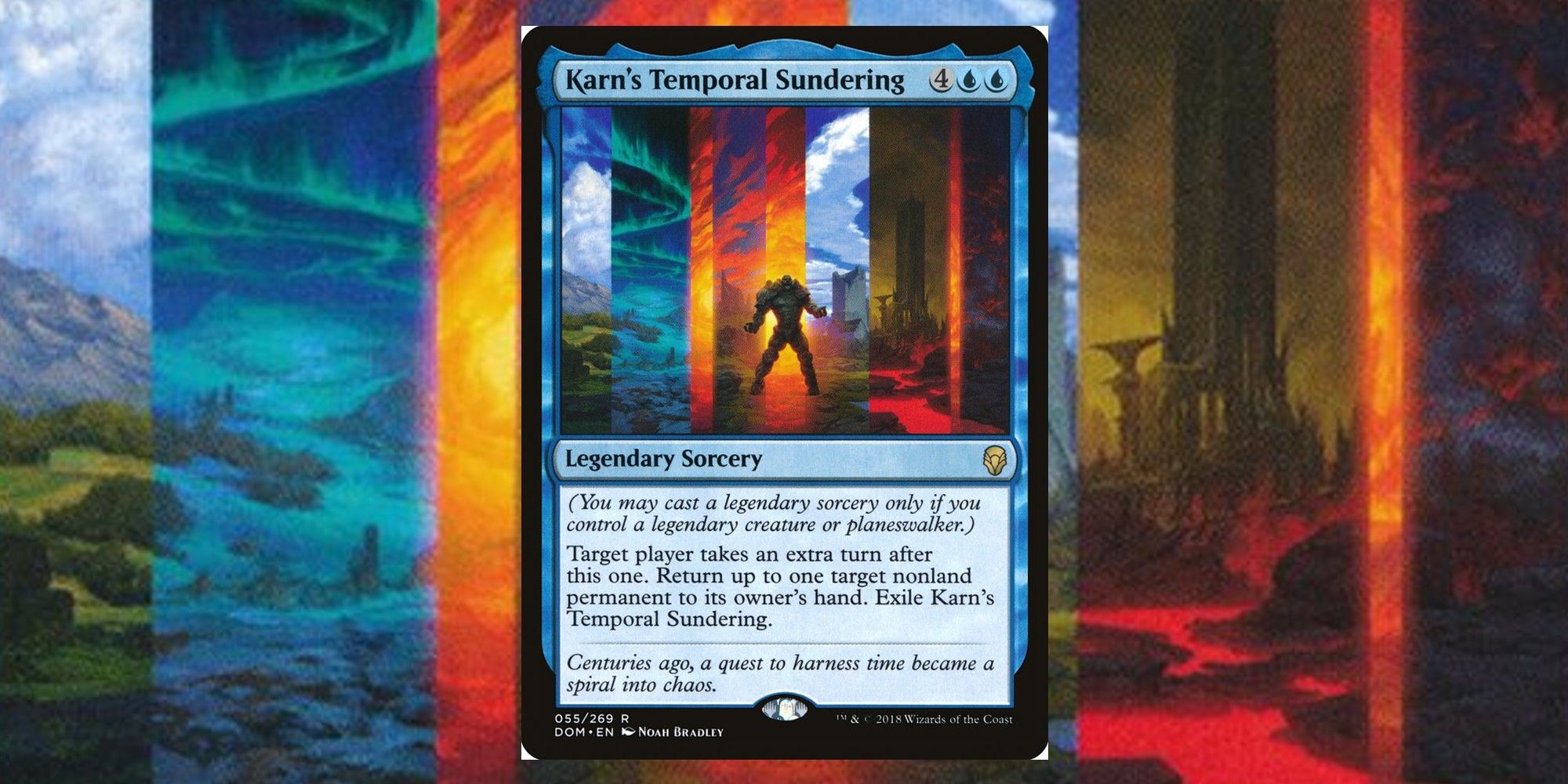 As previously mentioned, extra turns are going to be a focus of this deck. One of the best cards, especially on a budget, for taking an extra turn is Karn’s Temporal Sundering. As long as you control a legendary creature or a planeswalker, which is easy to do in Commander, you can return a nonland permanent to a player’s hand and take an extra turn.

Temporal Sundering allows you to clear something pesky from the board and take advantage by having an additional turn. Alternatively, you can return something of yours to your hand that might have an “enter the battlefield” trigger. For six mana, that’s a huge swing in your favor. 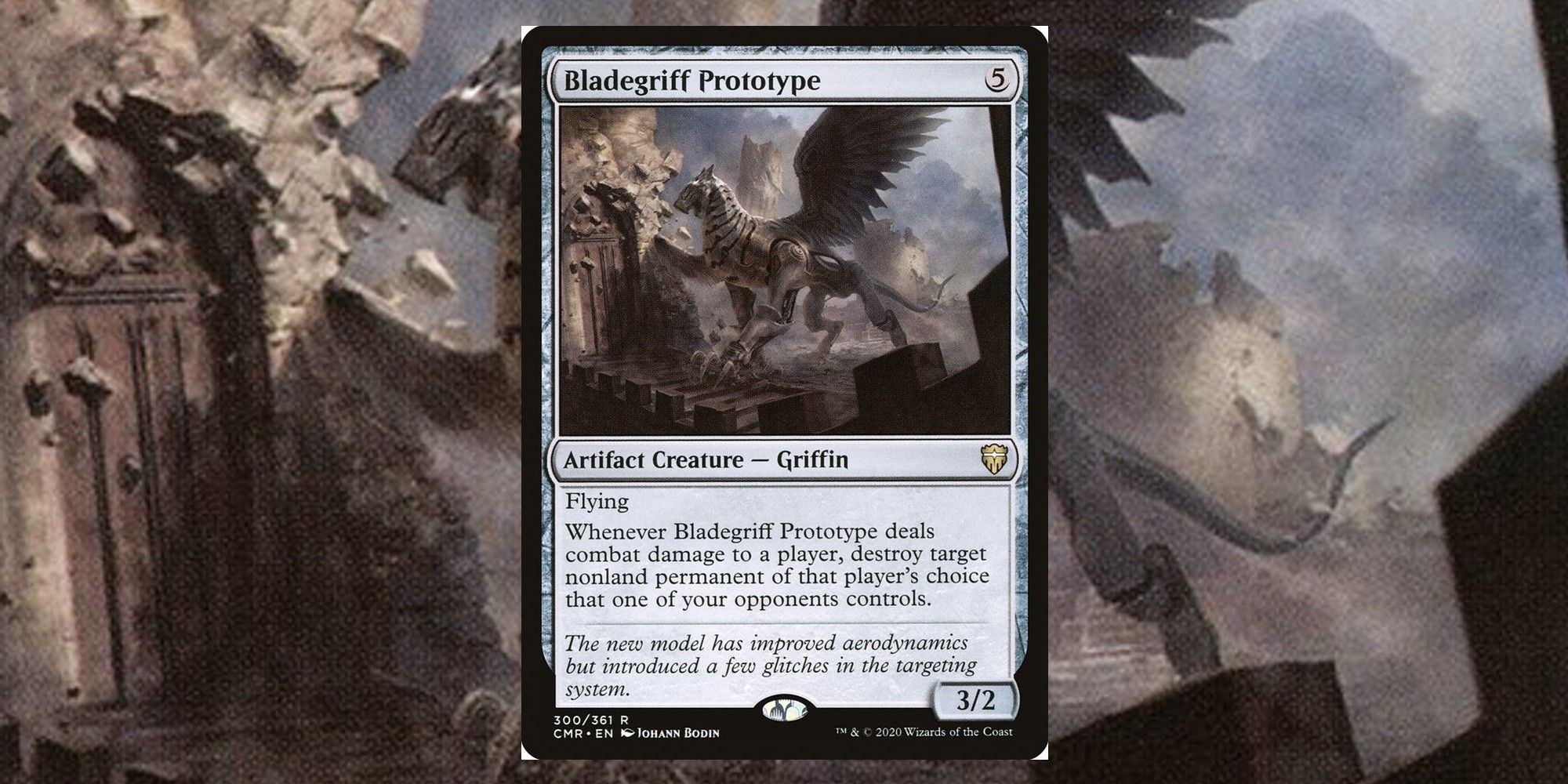 We want creatures that have a damage trigger because we’re looking to take extra turns. With something like Bladegriff Prototype, you’re sure to have your opponents quaking in their boots. Of course, they get to choose the permanent that gets destroyed, but in a game of Commander, that’s not typically an easy choice.

Bladegriff Prototype has evasion already with its flying, but if that’s not enough, Kamiz can make it unblockable to ensure it deals that damage. It’s only hitting for three, but the damage isn’t the goal here. Your goal is to maintain control of your opponents’ field. 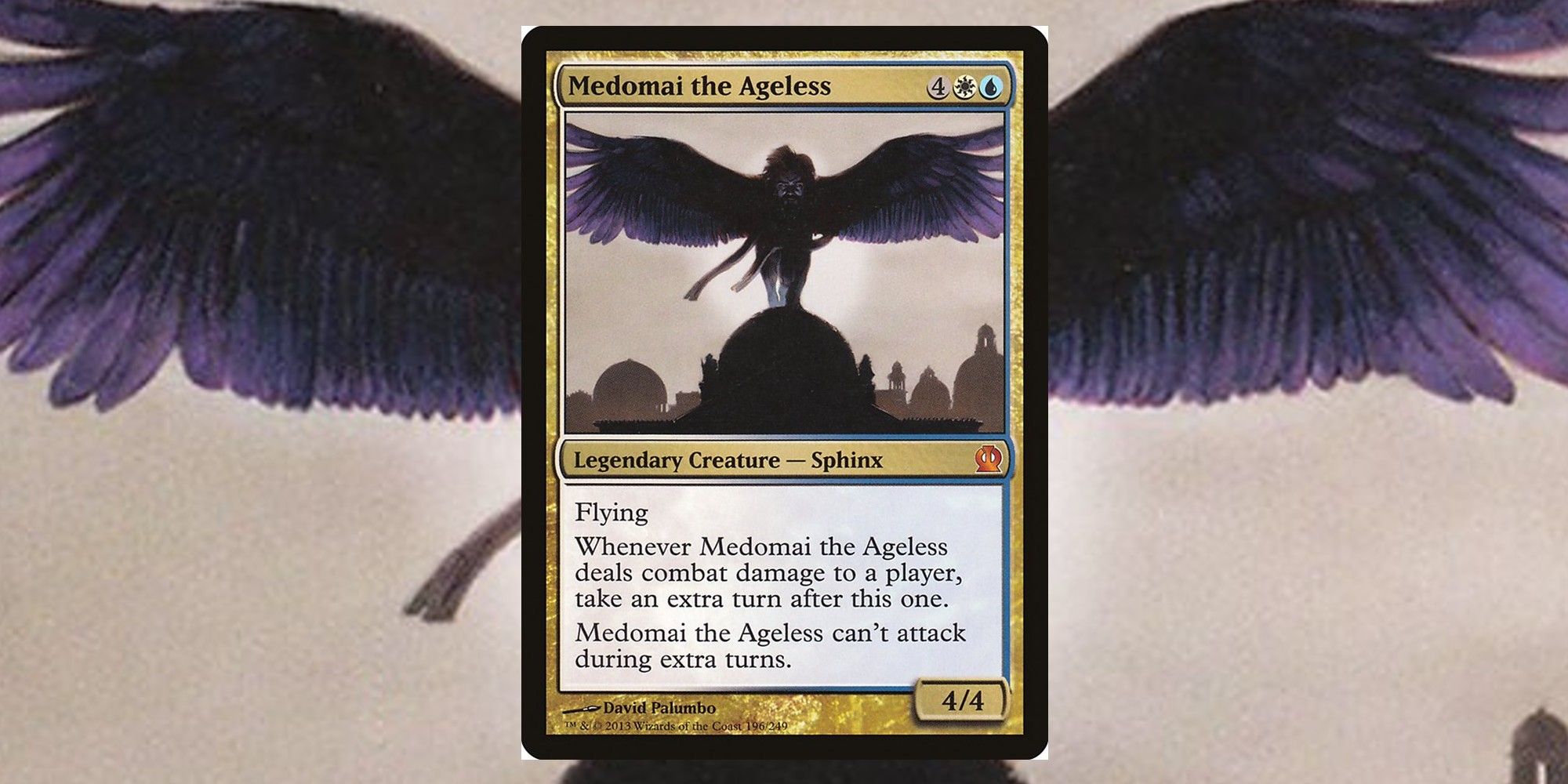 Has it been mentioned that your goal is to take extra turns with this deck? No? Well, Medomai the Ageless will grant you an extra turn if he deals combat damage. He might not be able to attack on any additional turns you have, but he is a good source to repeatedly get more turns.

Again, coupled with Kamiz’s ability to give a creature unblockable, Medomai is almost assured to get through to deal his damage. It’s worth noting that it’s not just the turns Medomai gives you that he can’t attack on. It’s any extra turns. Even the one from Karn’s Temporal Sundering.

5 Part The Waterveil Adds An Attacker To The Field 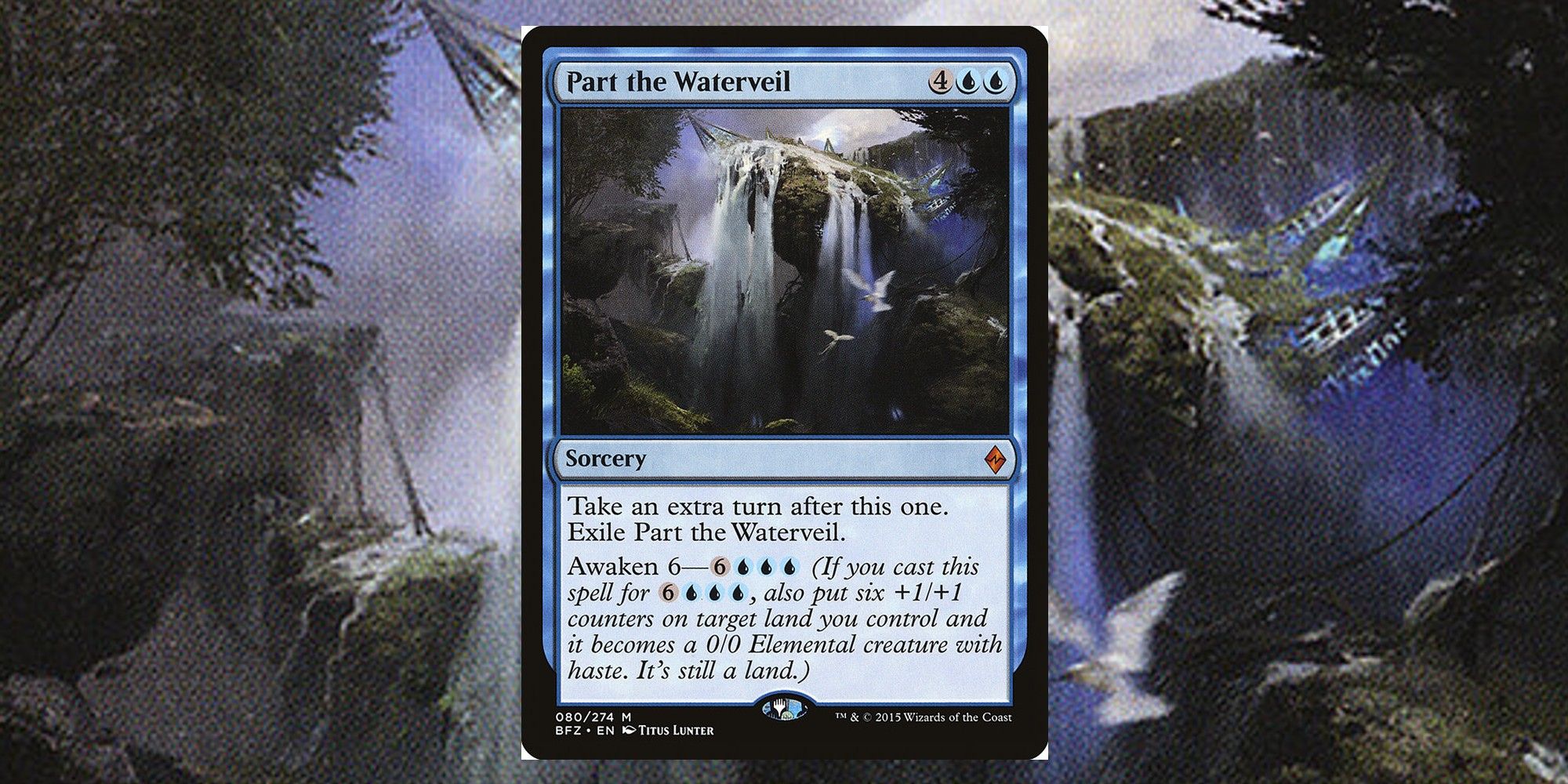 While this card is here because of the extra turn it gives you, another draw to Part the Waterveil is its Awaken mechanic. If you cast this for its Awaken cost, it gives you an extra turn as well as a new creature on the battlefield.

Awaken turns a land you control into a creature with haste and a number of +1/+1 counters on it. In Part the Waterveil’s case, six. This allows you to potentially attack twice as long as there are profitable attacks. 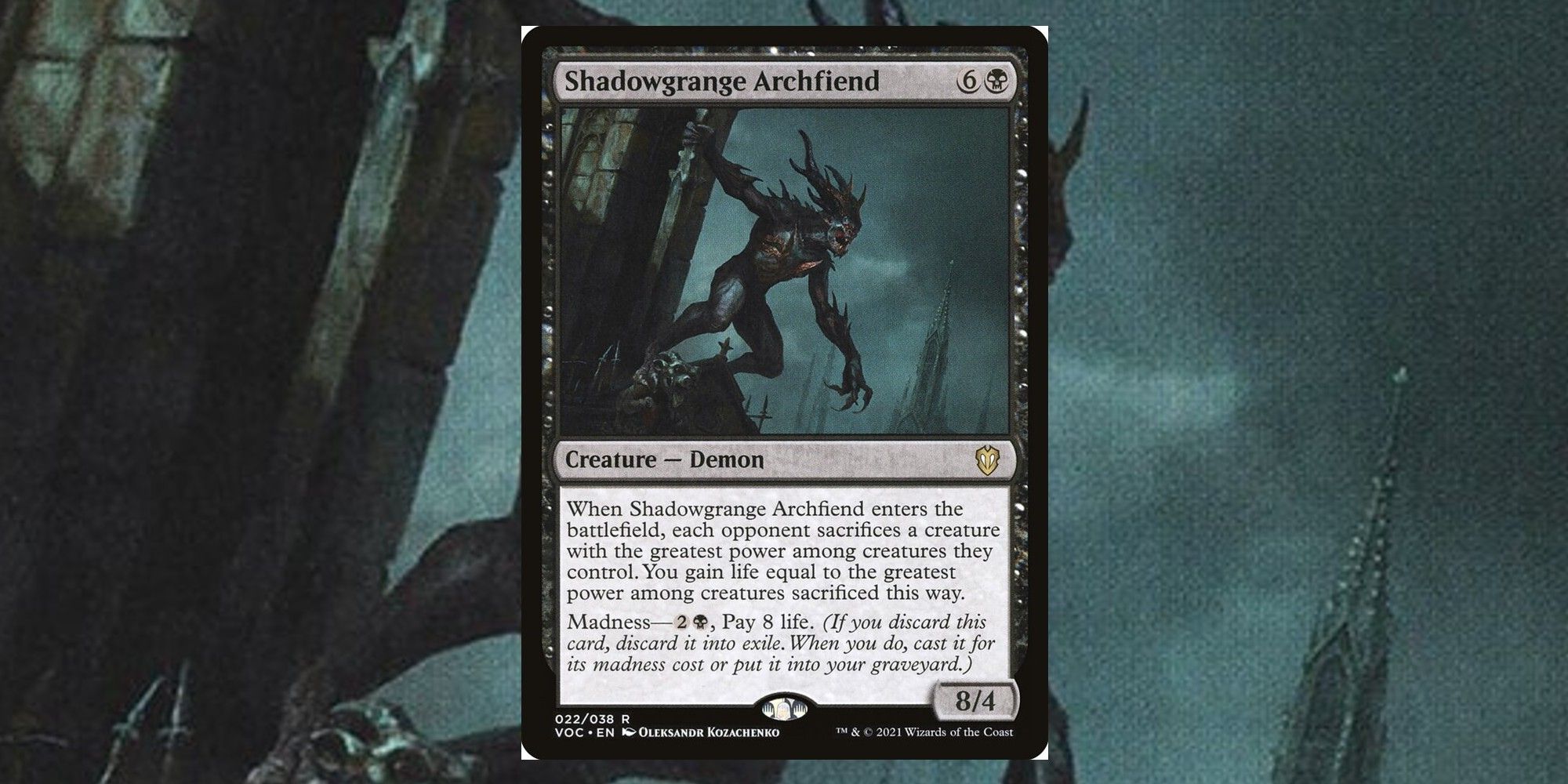 Seven mana is a little steep for a creature. Well, not in a game of Commander when mana rocks and other ramp spells are at your disposal — it’s easier to cast something that costs seven by turn three. Don’t be fooled, black has some excellent ramp spells for Commander. Luckily, Shadowgrange Archfiend comes with a Madness cost that allows it to be played at a discount.

Eight life might seem like a lot, but Archfiend’s ETB trigger can easily gain that life back. When he enters the battlefield, he gets rid of your opponent’s biggest creature and you gain life equal to that creature’s power. And not just one opponent, but all of them. He's like a homing missile.

3 Dream Trawler: A Sphinx With Card Advantage And Evasion 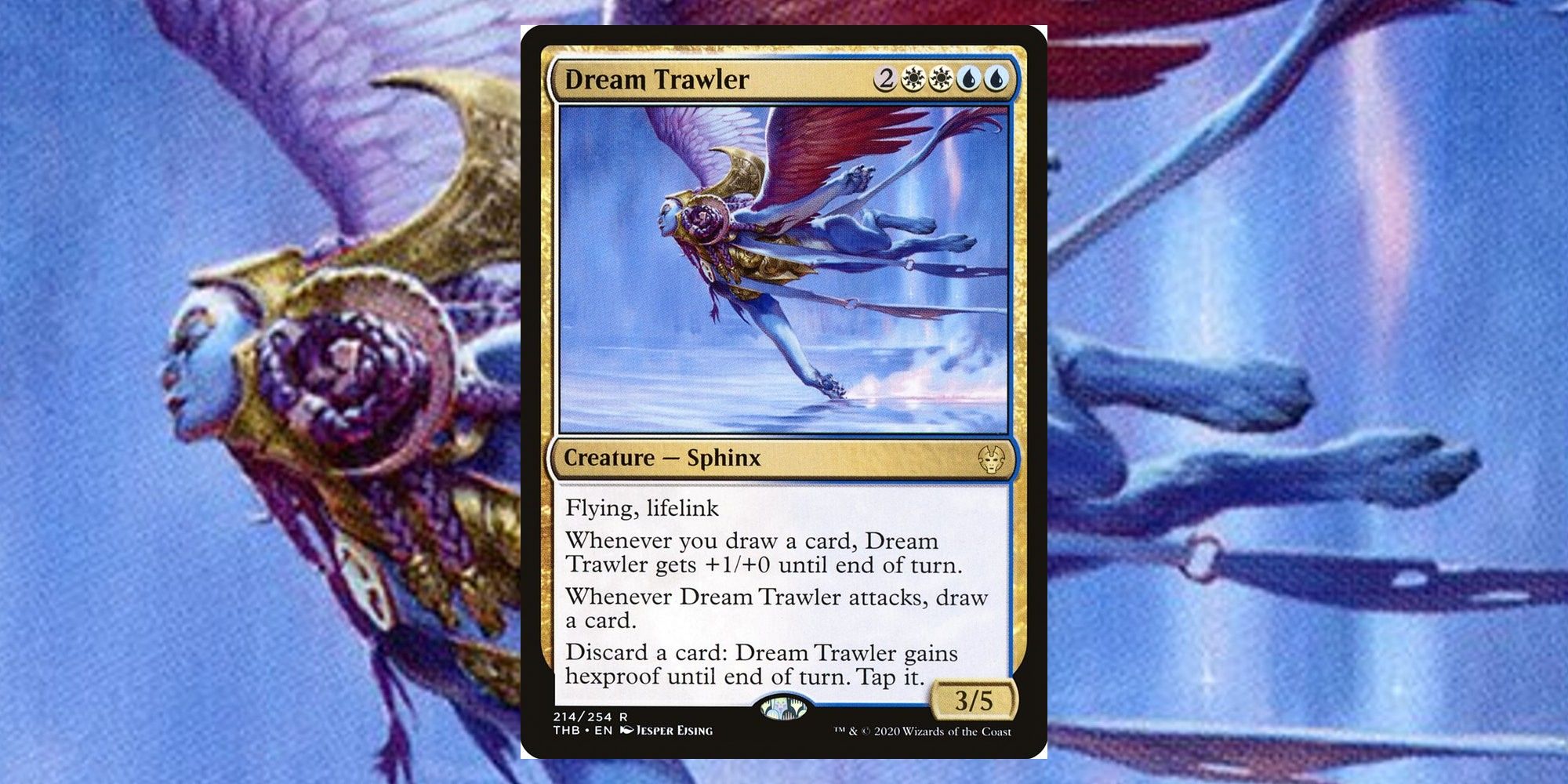 Dream Trawler was quite the force to reckon with when it was in Standard. In a deck like this, where Connive is a focus, it will be equally punishing for your opponents. Every time you draw a card, its power gets buffed +1. It draws you a card every time it attacks. Between your draw step and Dream Trawler attacking, that’s two cards. Throw Connive into the mix with any additional draw spells you play and this is one beefy sphinx.

Not to mention it receives hexproof to protect itself by discarding a card. When your spells are drawing most your deck, ensuring your hand will always be full, Dream Trawler isn’t going anywhere unless it’s because of a board wipe. 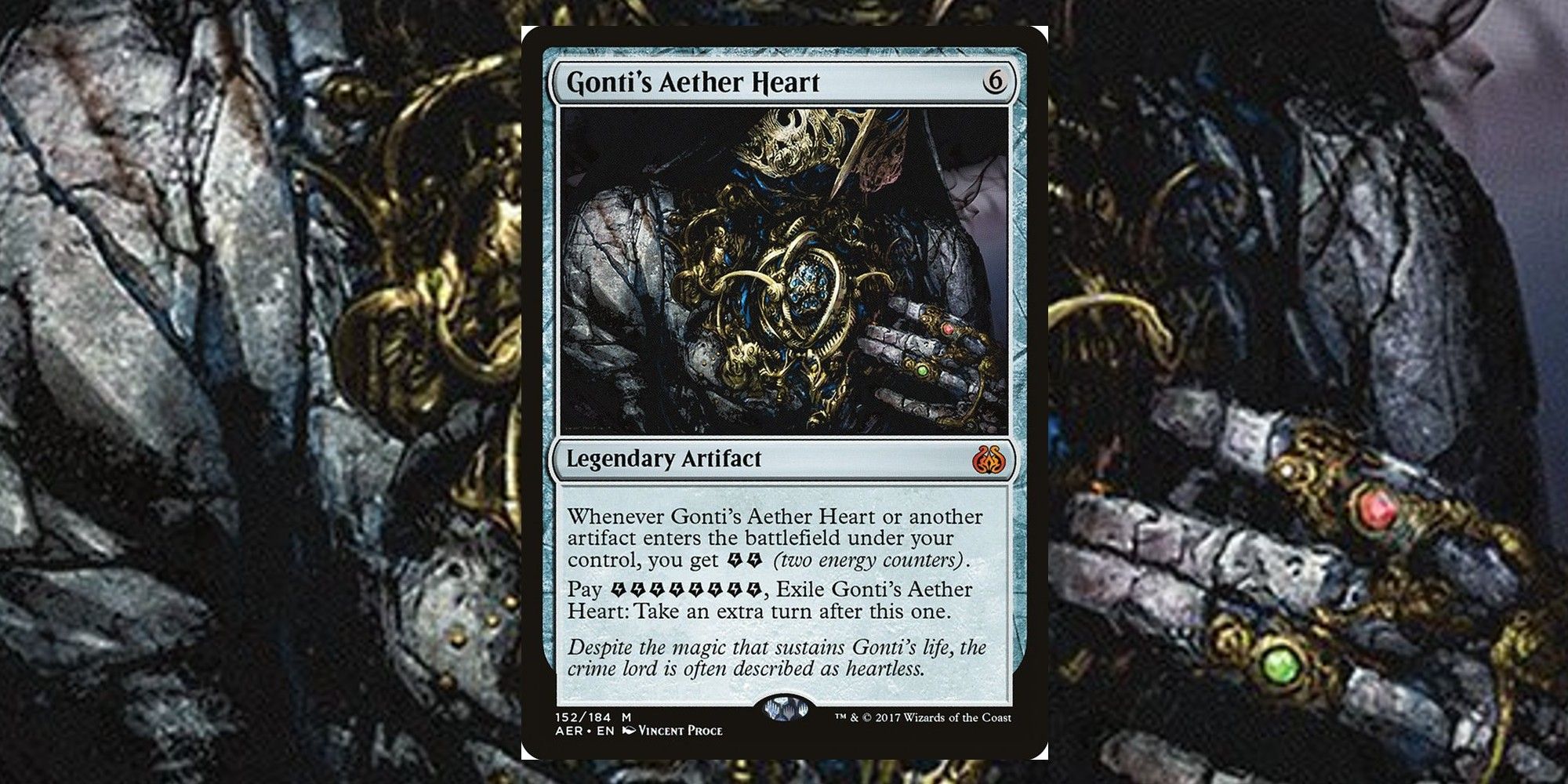 It’s no Time Vault or one of the other strongest extra turn cards in Magic: The Gathering, but Gonti’s Aether Heart gets the job done. It gives you two energy whenever an artifact enters play under your control. Once you have eight energy, you can exile the heart and gain an additional turn.

Alternatively, you can keep Gonti’s Aether Heart in play for a bit to gather up energy if you have any other cards that play with the energy mechanic. Something like Aether Hub is a common card used in Commander as it allows you to spend energy to add mana of any color to your mana pool.

1 Wonder Grants All The Evasion 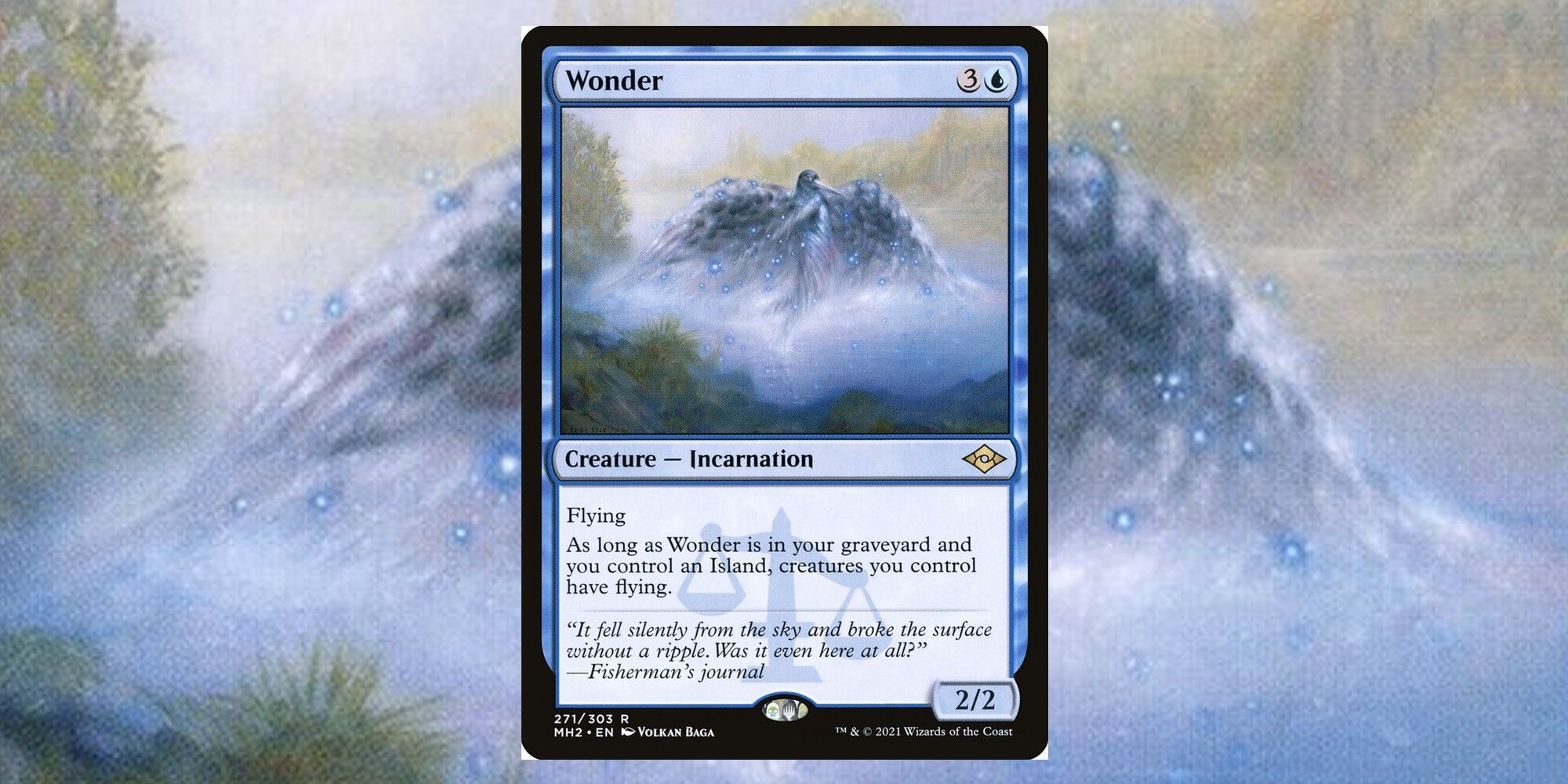 Evasion’s importance can’t be stressed enough in a game of Commander. In Magic: The Gathering in general, a creature with evasion is crucial because it increases your chances of dealing damage. Flying is just one form of evasion and Wonder is an excellent source of it. Get it into your graveyard and all of your creatures have flying. As long as your opponent doesn’t exile your graveyard or remove Wonder from it, they will have flying for the rest of the game.

Pew finds 69% of Twitter’s most prolific users are Democrats