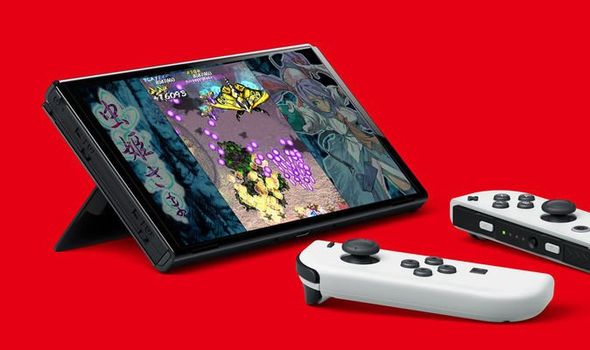 After months of speculation, Nintendo announced the new and improved Switch OLED Model earlier this week.

The new Nintendo Switch OLED Model will launch alongside Metroid Dread on October 8.

The headline new feature is the OLED display, which features more vibrant colours, as well as a higher contrast compared to the current Switch and Switch Lite.

While the console is similar in size to the current model, fans will benefit from a larger 7-inch display.

Unfortunately, however, it’s not all good news, especially if you’re a fan of shoot ’em ups.

The Nintendo Switch has a vast library of new and classic arcade shooters, including recently released CAVE shmup Mushihimesama.

Thanks to a device known as the Flip Grip, fans can play supported shooters in vertical-mode, just like the arcades.

Sadly, according to Flip Grip creator Mike Choi, the device doesn’t appear to be compatible with the Switch OLED Model.

“Due to the lack of the back cents the Flip Grip registers against, the OLED model is NOT compatible, at least from my initial observation.”

On the plus side, the Switch OLED Model features other improvements, such as a wider adjustable stand for tabletop mode and a LAN port for improved online performance.

With 64BG of internal storage, the Nintendo Switch OLED Model can hold more games – although you’ll probably still need an SD card if you download lots of games.

Finally, Nintendo has confirmed that the Nintendo Switch OLED Model will feature improved audio thanks to the beefier speakers.

Elsewhere, the stylish new console will launch with a brand new colour scheme, as well as the classic Neon Red and Neon Blue set-up.

Fans will be able to purchase a white model, complete with white Joy-Con controllers, a black main unit and a white dock.

Judging by the recent launches of the PS5 and Xbox Series X, it’s worth getting in early if you want to secure a console at launch.

Unlike the Switch Lite, the OLED Model will support both handheld and docked gameplay, meaning it can be played at home on the TV, and on the go.