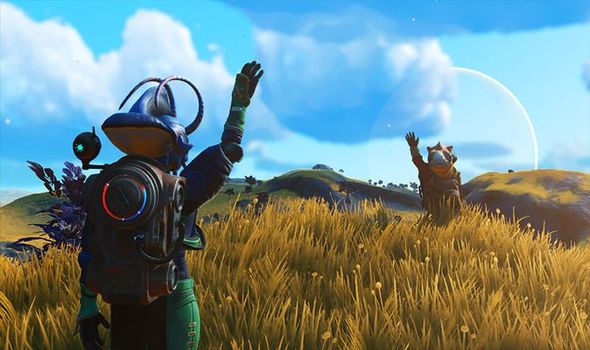 As you can see from the patch notes below, the huge new No Man’s Sky update makes hundreds of changes to the game.

Graphics and performance has been improved, with speedier loading times, reduced memory and optimisations all coming into play.

Elsewhere, players will be able to quickly find friends in multiplayer, and even take part in new missions.

You can check out the full No Man’s Sky update 2.0 patch notes below…

• No Man’s Sky is now fully playable in virtual reality.

• Many interactions have been given special VR-only options, including: grabbing plants and other collectables with your hands; physically opening the cockpits of ships and exocraft; piloting starships directly with a VR stick/throttle; and punching objects to cause damage.

• Introduced special VR menus: including controlling Multi-Tool options via a menu embedded on the in-world Multi-Tool; and browsing the quick menu and inventory via a personal wrist-mounted display.

• OpenGL has been replaced by Vulkan. Many players, particularly players with AMD graphics cards, should see a performance improvement.

• Added level-of-detail mesh optimisations to the majority of in-game assets.

• Adaptive and Triple-Buffered V-Sync are now selectable from Graphics Options.

• Players with more than one GPU can now select which is used from Video Options.

• Many graphics settings no longer require a restart to apply.

• Added support for full rebinding of PC controls via Steam and OpenVR.

• Added the option to remove button holds and make all non-destructive clicks instant.

• Added the ability to summon the Space Anomaly to your location from anywhere in the galaxy.

• Significantly expanded and reworked the interior of the Space Anomaly.

• The Space Anomaly now serves as a hub, bringing together all the Travellers who are onboard regardless of their physical location in the universe.

• Removed orbs from the game and replaced them with fully simulated other players, met ambiently as you explore.

• The network player cap has been raised to between 8 and 32 depending on platform and current location.

• Added a new teleporter to the Space Anomaly. This teleporter allows players to visit the base of any other player currently on the Anomaly with them, as well as highlighting featured bases from the community.

• Moved multiplayer mission selection to the Nexus, a new hub area in the Space Anomaly.

• Added an interface for quickly finding other players to join on multiplayer missions.

• Multiplayer missions now warp players directly to the mission location as they leave the Space Anomaly.

• Added the ability to display a custom player banner, adjustable at the Appearance Modifier.

• Player graves in multiplayer games will get reset to the current player’s system when returning to single player.

• A new save icon is used in multiplayer to highlight that while progress is saved, the player’s current position is not.

• Reworked the story missions to integrate Nada and Polo’s journey better with the story of Artemis.

• Reworked the tutorial and much of the early game mission flow.

• Added new and unique visuals for new NPCs aboard the Space Anomaly.

• Added an NPC to the Space Anomaly who will exchange a different product for nanites each day.

• Added an NPC to the Space Anomaly who will exchange milestone progress for nanites.

• Added an NPC to the Space Anomaly who will exchange different categories of discovery data for nanites each day. 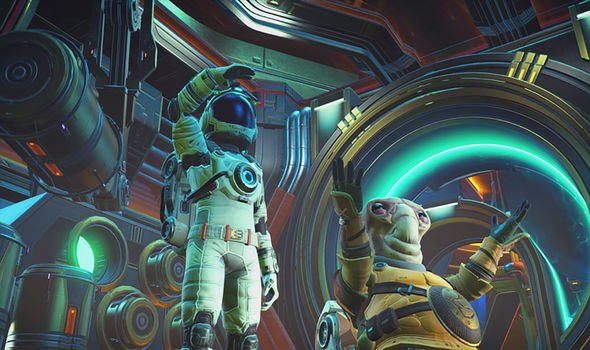 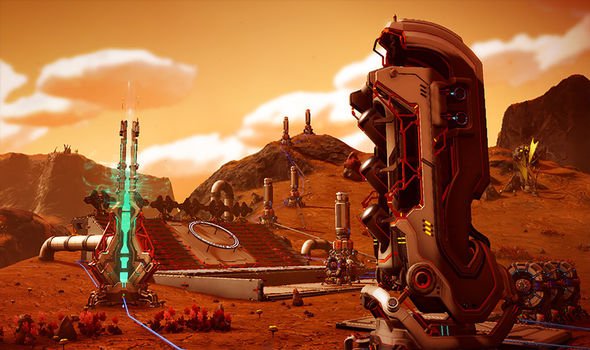 • Added a tech-tree style display for all the technologies, products and other recipes available in the game.

• Added technology and base part research stations to the Space Anomaly, allowing players to browse the full tech tree, plan their upgrades, and purchase new technologies with nanites.

• Tweaked the visuals of HUD and compass markers for improved clarity and consistency.

• Adjusted the behaviour of compass markers while in the ship to better reflect the reality of navigating 3D space.

• Improved the UI for comparing and purchasing ships, Multi-Tools and freighters.

• Added a warning when trying to swap starships if you still have cargo aboard your old ship.

• Changed text scrolling to a full wraparound rather than a bounce.

• Reduced the amount of bloom in cases that caused photosensitivity issues.

• Improved the visual style and clarity of the Buy/Sell filters on trade screens.

• Improved the icons used to display the class of ships, Multi-Tools, and other purchasable items.

• The icons for summoning other ships in your collection now accurately reflect the appearance of those ships.

• Updated the visuals for the in-cockpit ship screens.

• Significant improvements to the chat box, including the ability to choose whether messages are sent to your group or the entire system.

• Moved substances, products and technologies to their own ‘Catalogue’, separate from the Guide.

• Increased the size of icons in the Catalogue.

• Improved the appearance of the dialog / NPC speech UI.

• Mission notifications / objectives are no longer hidden by the build menu, inventory or refiner screens.

• The Galaxy Map has been totally overhauled for clarity and visual style.

• NPCs can now walk around their environments and interact with environmental elements.

• Players can now sit on chairs.

• Improved the camera handling when sitting in a confined area.

• NPCs will respond to gestures performed by the player.

• Changed the reward sequence for factory interactions to allow players to choose which product recipe they would like to learn.

• Added a range of biome specific interactions for NPCs at planetary buildings.

• NPCs can now choose a chair to sit on, sit down for a while, then continue with their day.

• Expanded the range of NPC moods and animations.

• Increased the richness of text interactions with additional audio, colours and NPC animations.

• Added different text printout speeds for each alien race, giving them their own style of ‘speech’.

• Added a chance for guest NPCs to visit Space Stations, eg the occasional Korvax may be found in the Space Station of a Vy’keen system.

• The Trade Outpost is treated as a building (for the purposes of providing hazard protection), but plays correct outdoor audio ambience.

• Added AutoTranslator technologies to the Exosuit that allow random words to be translated without being permanently unlocked.

• Fixed an issue where }} alien speech brackets would appear on a new line by themselves.

• Alien word learning has been overhauled. Players may direct the flow of language acquisition when interacting with NPCs.

• Players can practice using the words they know when speaking to alien lifeforms and observe the results.

• Reworked the Base Building Menu: improved visual clarity; improved usability; and allowed quicker access to parts, including adding the ability for parts to be in more than one group.

• Day/night cycles are now deterministic and synced between players.

• Significant improvements have been made to the base part snapping system, allowing for faster and more convenient building.

• Added the ability to scale some base parts.

• Added the ability to rotate some base parts around more than one axis.

• Added new power generation base parts: Biofuel Reactors, Solar Panels, Electromagnetic Generators and Batteries. Each offers a different way to generate power for your base.

• Added wiring, allowing you to connect base parts that need power to your generators.

• Removed the manual fueling of many base technologies and replaced it with power grid requirements.

• Added power requirements to existing parts such as lights.

• Added a range of logic gates and switches, allowing for creative control of powered parts.

• Added a new Survey Device upgrade for the Analysis Visor, allowing player to hunt out the optimal spots to place mineral/gas extractors and electromagnetic generators.

• Overhauled the gravity simulation, improving the experience on dead planets.

• Added Short-Range Teleporters. These pads may be placed around your base and wired up to create a network of near-instant transportation.

• Improved the management of base options when interacting with the base computer, including improving the ability to take screenshots of the base.

• Added the ability to jetpack while the Build Menu is open.

• Improved the visual effects of the Terrain Manipulator.

• Unified the functionality of the Message Module and the Communications Station and added a new unique art asset.

• Added new exocraft-sized doors that can be powered to open and close automatically as you approach.

• Improved the visual effects when constructing base parts & technology.

• Overhauled the Analysis Visor. Scanning of flora, fauna and minerals no longer begins automatically, but begins when the player holds a button while looking at the relevant object.

• In VR, the Analysis Visor becomes Analysis Mode. Objects are scanned by aiming at them with the Multi-Tool.

• Custom Markers placed from the Analysis Visor now drop a physical object at the marker location.

• Significantly overhauled the Discovery Page to show a graphical representation of the system, as well as close up 3D representations of all discoveries and long text entries for fauna.

• Made butterflies and other flying creatures much easier to scan with the Analysis Visor.

• Creature markers in the Analysis Visor now display how far away the creature is.

• Fixed an issue where creatures would never poop once they had been scared by a predator.

• Predator creatures no longer target and attack players when they are in an interaction.

• Creatures will no longer attack players who are in their ships.

• Improved the clarity and display of warning icons on predatory or angry creatures.

• Fix for biological horrors not playing their death effects for network players.

• Fix for incorrect fauna level being displayed in the Analysis Visor.

• Added the ability to cook plant and animal products in a Nutrient Processor to produce a wide variety of food. Experient with combinations to create unique and complex foodstuffs.

• Eating food provides a boost to your life support.

• Added bait products, created in the Nutrient Processor, that allow creatures to be harvested for food products. Scan creatures to learn their bait preferences.

• Added an NPC to the Space Anomaly who will judge the player’s cooking ability.

• Improved the visuals of Faceium deposits.

• Added a base part that will attract creatures to your base and automatically feed them.

• Added a base part that will automatically extract milk and other relevant resources from nearby creatures that are ready to be harvested.

• Throwing bait can attract a large number of creatures to one location.

• Creatures that have been tamed by supplying their desired bait can be ridden. Creatures will still attempt to go about their own business, but their routines can be shaped by their rider.

• Upper body gestures may be used when seated or riding a creature.

• The Nutrient Processor and the Portable Refiner now display a marker when they are not placed within a base.

Itch.io Bundles More Than 740 DRM-Free Indie Games For $5 To Raise Money For Racial Justice And Equality