Home » News » Oddworld: Soulstorm revives the series by bringing back Abe and abandoning 20 years of expectations

First came success. With Oddysee a surprise hit, publisher GT Interactive demanded a sequel for the following Christmas. The result was 1998’s Abe’s Exoddus, a stopgap release. Still well-received at the time, it didn’t advance the core Oddworld storyline and was considered a “bonus” game by both developers and fans.

Then came circumstance. Munch’s Oddysee, released in 2001, was considered the true successor to Abe’s Oddysee—the second part of the original five-part plan. But a late-stage deal to make it an Xbox-exclusive saw Munch’s Oddysee essentially rebuilt from scratch in simplified form, rushed to release alongside Microsoft’s console debut.

Then came Stranger’s Wrath. A cult classic, the fourth Oddworld game strayed even further from the original five-part story and essentially used the universe as backdrop for a faux-Western. It also sold poorly at the time, after which Oddworld went dormant.

Finally, came Lorne Lanning himself. He devised the original plan, all those years ago, and he can damn well blow it up if he wants to.

And he wants to. I traveled to Oddworld Inhabitants’ office a few weeks ago to see Soulstorm, and came away with details about what will surely become the most ambitious retcon in video game history, erasing 21 years of established canon and expectations so Lorne Lanning can take a second shot at telling the story he set out to tell in 1997.

“Abe’s back.” That’s how the latest Soulstorm trailer ends, and that’s the key to Lanning’s adapted vision. Soulstorm is a direct sequel to Abe’s Oddysee, or rather to the 2014 remake New ‘n’ Tasty, and it’s also (as the trailer puts it) “The all-new second episode of the Oddworld Quintology epic.” No more different-protagonist-for-every-game. Oddworld is, at least in this reimagined Quintology, the story of Abe, the unwitting slave who sparked a revolution almost by accident. Abe and Abe alone. Sorry, Munch.

“But wait, Abe’s Oddysee already has a sequel. You mentioned it up top.” True enough, and Soulstorm incorporates aspects of Abe’s Exoddus. Both Exoddus and Soulstorm revolve around Soulstorm Brew, an energy drink that keeps consumers stupid and complacent and which becomes the latest target of Abe’s growing insurrection as he liberates those involved in (quite literally) making it. 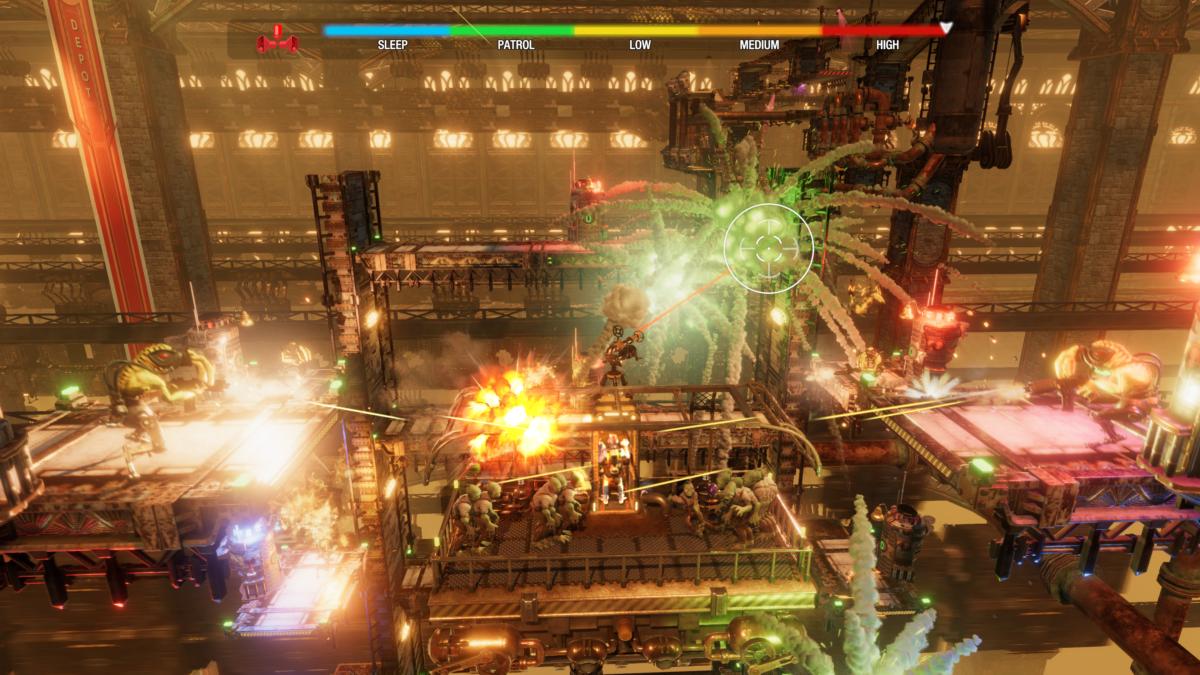 Soulstorm is not a New ‘n’ Tasty-style remake though. It’s not elevating Exoddus from a so-called “bonus” game to a core part of the series. It’s, at least to hear Lanning tell it, grander and more ambitious than that, lifting elements of the original Quintology plan but refocusing them around Abe.

It’s also an evolution of the classic 2.5-dimension Oddworld mechanics, a fact that’s immediately clear when Lanning starts the demo. “Everything you can see in a level becomes playable, even if it’s way back in the distance,” says Lanning, as we start trudging through a familiar Oddworld factory landscape. And there’s a lot in the distance. Lanning calls it 2.9-D, this sensation of added depth in Soulstorm. The factory stretches back four or five discrete layers, with workers patrolling and machinery clanking around. It’s all real, stored in memory and rendered in real-time, and Abe will eventually enter these areas as he progresses through the level.

It’s impressive. It doesn’t change the way Soulstorm plays really, with each area somewhat self-contained. But it’s cool to see them all laid out at the start, and to get a preview of what’s to come later on.

Which is not to say Soulstorm plays like Oddysee. Quite the opposite, really. “We built something we refer to as a scavenger’s economy,” says Lanning, as Abe roots around in a trash can. “He can take what he can buy—Brew, Fizzy Pops, Bubblegum, Lighters—and craft them a la Anarchist’s Cookbook with the collectibles he’s finding, so it’s really more in the revolutionary spirit.” 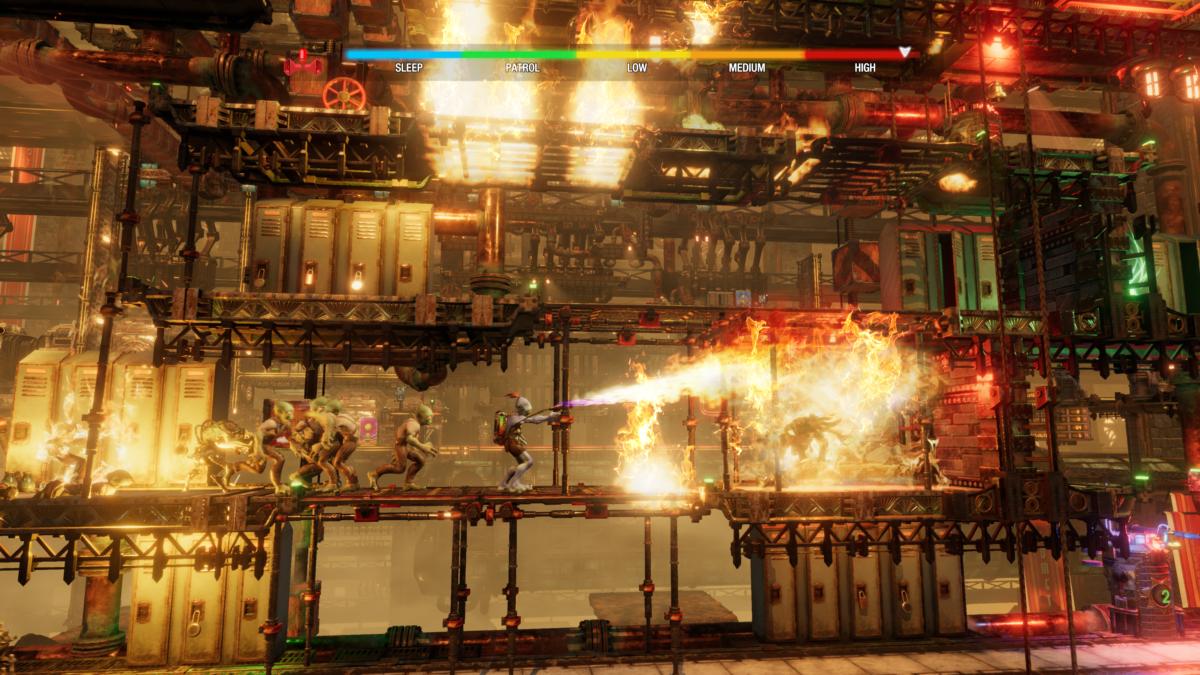 Yes, crafting. And weapons. The system seems remarkably robust, with Lanning showing off at least two-dozen different variants during my demo. Items can be used as-is, so Abe can throw a jawbreaker at a guard to knock him out—or he can wrap one in rubber bands first so it bounces off walls. A fire extinguisher is self-explanatory, but combining an extinguisher with Brew, a lighter, a battery, and a wire will create a flamethrower, for the opposite effect.

These ideas aren’t new per se, but they’re new to Oddworld, in part because most of them became trendy after the series disappeared. Right now the system seems a bit finicky, a bit heavy on micro-managing multiple resources, but it’s still an interesting direction for the series now that the platforming challenges in Oddysee and Exoddus don’t seem like enough to keep people interested.

“We wanted to shift out of the super-tight twitch puzzles, like get underneath these blades that will kill you, and get more to the point where the puzzle is keeping everyone alive,” says Lanning. And on that note, the people Abe liberates are a lot more hands-on this time around as well. “Traditionally your followers were beasts of burden. In this case, we wanted you to feel like you had delicate characters in a dangerous world. Then you can empower them, so you become this dangerous gang.” 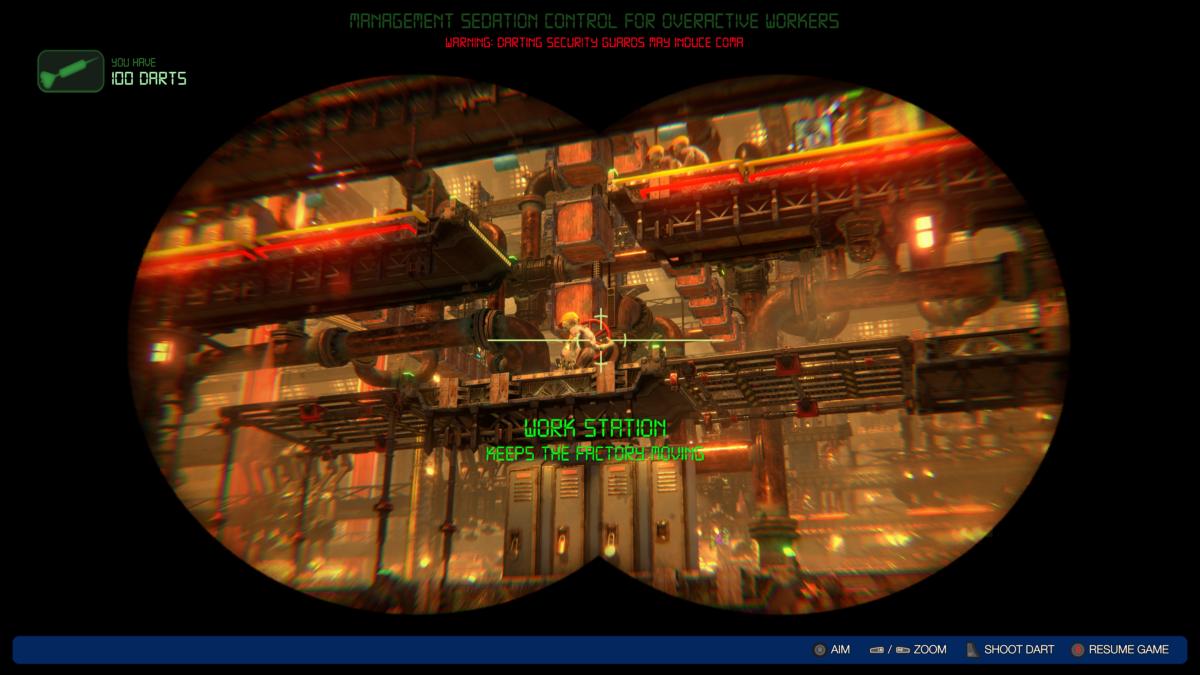 Anything you can craft, you can give to your followers. The result is emergent chaos, as I witnessed multiple times in the demo. Lanning was fond of giving his followers flamethrowers and molotov cocktails, which as you might expect ended up with a whole lot of stuff on fire—enemies and friends alike. A helpful tip: You can give your followers bottles of water, and they’ll try to extinguish any crispy friends with it.

In classic Oddworld tradition, your method of approach also influences how the story plays out. “You can get through the whole game without killing anybody. Not even the bad guys,” says Lanning, “Or you can kill everyone, even the guys you’re supposed to be rescuing, which leads to very different dark or light endings.”

Though it’s also tradition for Oddworld to consider the light ending canon. “We’re not doing the Peter Molyneux thing, like ‘What if I go dark?’” says Lanning. “We want you to go light.” Something to keep in mind for an eventual Quintology, Part Three.

Soulstorm will be divisive I bet, especially to longtime fans who’ve waited nearly two decades for the third entry (reputedly Squeek’s Oddysee) in the original Quintology. I think it’s the right move though. I admittedly haven’t seen much of Soulstorm’s story yet, but was shown the nearly-ten-minute movie that opens the game. It hints at the character growth Abe will go through, from naive and reluctant hero to battle-hardened veteran. That tease alone already pushes the overarching plot forward more than Munch’s Oddysee did.

And that’s ultimately what I want, if the alternative is the story left unresolved. I voiced similar concerns with Darksiders III last year, a series which planned a similarly ambitious series of interconnected games—the first four taking place concurrently, the fifth tying the plot together. And while I loved that idea when the first two games released, six years and the near-death of the series made it seem foolhardy to stick to that plan when Darksiders III released. What if we never get a fourth? Or a fifth?

With nine years between Stranger’s Wrath and New ‘n’ Tasty—and nearly twenty between Munch’s Oddysee and a proper Oddworld sequel—perhaps a bit of focus is precisely what’s needed. Look for Oddworld: Soulstorm to release in early 2020, provided everything goes to plan from here on out.

Erika Mori and Han Soto On Life Is Strange: True Colors At The BAFTAs

A Complete Guide To Dating In Harvest Moon: One World