Pokemon TCG Live is rolling out at last, and with it comes a total reimagining of its long-running predecessor app, Pokemon TCG Online. And although you'll find the same core Pokemon Trading Card Game experience either way, Live accentuates certain aspects to a higher degree than Online, putting them front-and-center and potentially baffling brand-new players in the process.

One such example is the issue of Standard and Expanded format. If you've only been playing the Pokemon TCG for a handful of years (or less), this is a concept you may have fortuitously bypassed in its entirety before now. Let's get you up to speed, so you can build prime decks for either occasion.

What Is Standard Rotation? 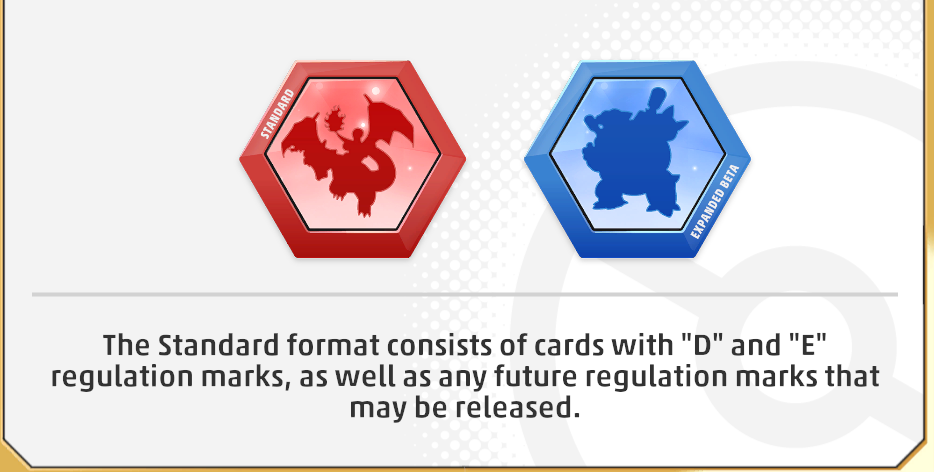 Picture, if you will, a deck comprised of cards from the Pokemon TCG's first ever run: the cluster of cards known as Base Set. Cycle through your precious Pokemon, taking note of their HP, the strength of their attacks, the number of drawbacks tied in with the strongest of them, and the associated Energy costs.

Now, thumb through any deck from between, say, 2002 and 2006. Contrast the Base Set gang with this one, and you'll surely notice that the newer cards are significantly mightier. Base Set cards with 90 HP could be tanks in their own right. Not so in the mid-oughts. The recoil damage involved in your Base Set Chansey card's attack, once been considered situationally worth the pain, is no longer remotely wise.

As you can see, there was a big shift within the first several years of the Pokemon TCG, trending upward. Higher numbers all-around. New forms of cards, like Pokemon ex, were capable of obliterating older fare.

This gradual process, dubbed 'power creep', has steadily continued through the decades. As of this writing, we are at the tail end of the Sword & Shield era of the Pokemon TCG. There are Pokemon VMAX with well over 300 HP. Some can dole out even more damage in a single action. It stands to reason, then, that your beloved Base Set Chansey no longer has a place in what is called Standard Rotation, an annual addendum to formal matches which removes the oldest remaining legal sets.

To be fair, this isn't always just to combat the power creep. Sometimes, Trainer Cards and such from much older sets exit the Standard Rotation for a while by default, only to re-emerge, perhaps with slightly different rules for a modern era, in a newer set that fits the current rotation.

Regardless, Standard Rotation is one of the two core modes of Pokemon TCG Live, and it limits players to whichever sets are presently deemed acceptable for formal play.

Does That Mean Extended Encompasses Every Set?

With due respect to your Chansey, she will never again see the light of day. At least, not on Pokemon TCG Live.

At launch, the Pokemon TCG Live app's Extended format only goes as far back as the beginning of the Sun & Moon era. These regulated cut-offs, even in Extended, serve a logical purpose. It boils down to our earlier analogy. The difference was big enough between the Red & Blue and the Ruby & Sapphire eras, right? While the shift in power is, arguably, not quite as extensive from the start of Sun & Moon to the end of Sword & Shield, it's still there.

In order for Extended to remain viable, it relies upon a routine culling of individual cards — banning them, in other words. You're bound to bump into awkward situations in which, for all its relative weakness, a card from Black & White's days, designed purely for those days, breaks the game wide open from 2019 or so onward.

There are simply too many permutations involved for Pokemon TCG Live to permit an unlimited number of sets in its Expanded ruleset. But your options are widened considerably, and hey, at least you get to use Fairy Pokemon again; they're no longer a thing from Sword & Shield onward!

Mind you, one word in the above passage has some significance worth further discussion over. 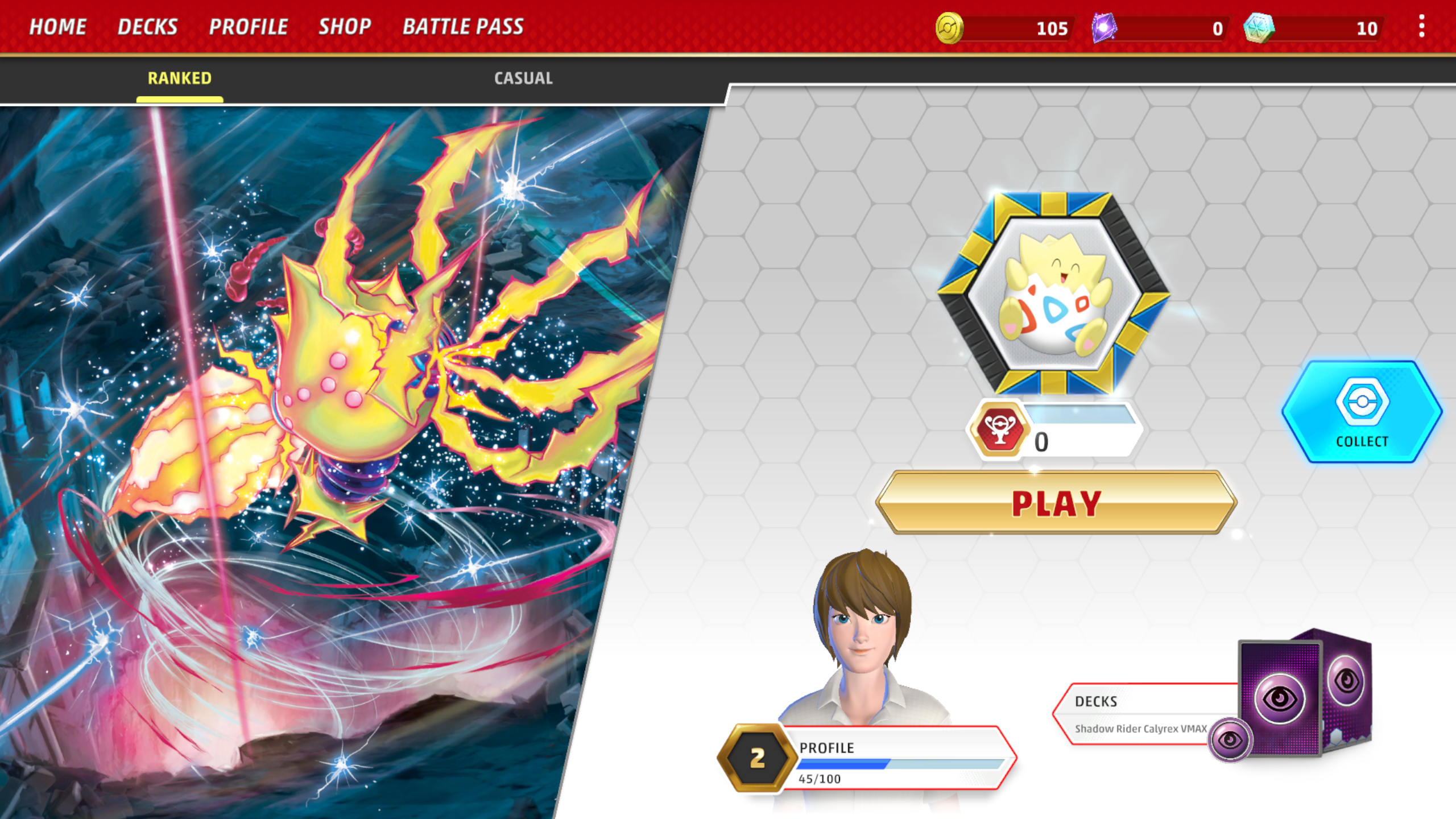 If you've dabbled in Pokemon TCG Online, or you're just hip in the Pokemon TCG scene in general, then you'll know that there's a third option in there called Unlimited format. As the TCG Online app was designed with expansions from the HeartGold & SoulSilver era forward in mind, this enabled players to add any tournament-legal cards to their decks from around 2009 forward.

In reality — that is to say, when two players gather for a match in real life, without digital limitations — Unlimited's reach is universal. Yes, you can toss your Base Set Chansey in there. We wouldn't recommend it, for reasons that should be apparent, but don't let that stop you if you're bound and determined.

As of this time, Pokemon TCG Live does not support Unlimited. This may hold true indefinitely, as The Pokemon Company International will (understandably, to be fair) likely wish to focus on upcoming expansions rather than rather old ones as Live is consistently updated.

Should You Play Standard, Expanded, Or Both In Pokemon TCG Live? 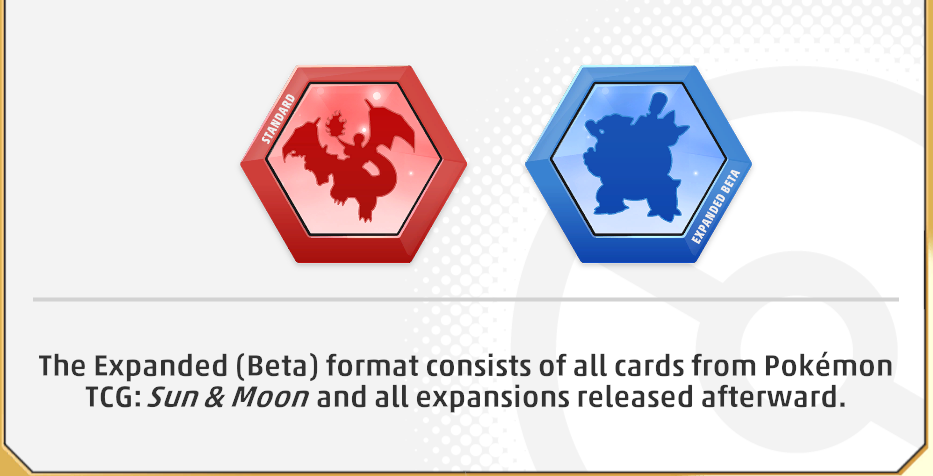 There's no right or wrong answer here, though for our two cents? Both. You'll gain a richer understanding of how the Pokemon TCG has, forgive us, evolved through the generations with Expanded, plus you may find strategies no longer relevant for Standard format that could potentially be retooled and rekindled in future expansions.

Standard, being the resident flag bearer of what's hot in the Pokemon TCG at any given point in time, can teach you to focus more, to hunker down on a less daunting number of cards, and to practice tried-and-true contemporary strategies to see how the pros are upping their game in the here and now. Besides, no card sticks to Standard for longer than a handful of years, so why not get the most out of them while you can?