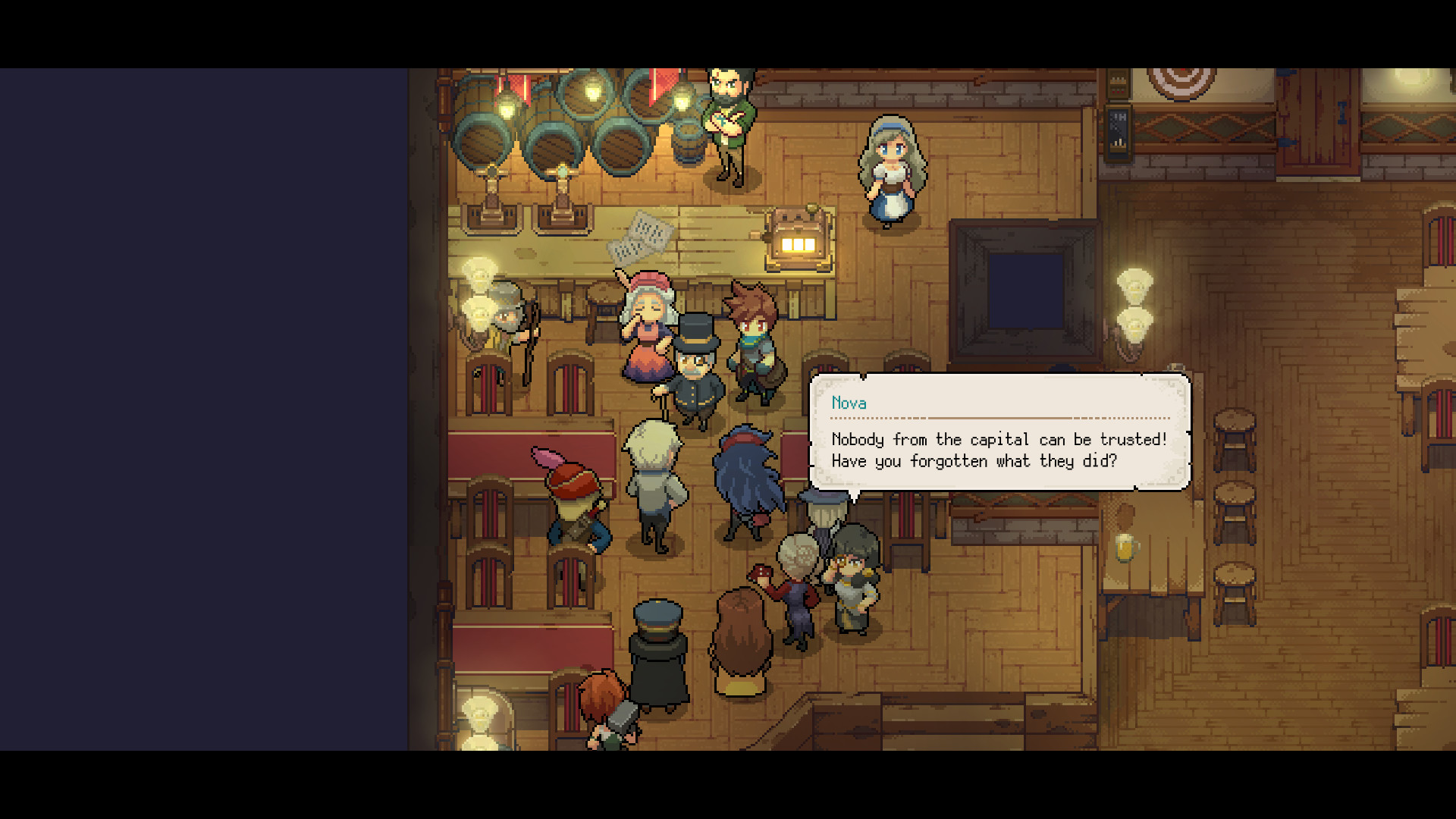 Ultra violence and punishing difficulty are nowhere to be found in this charming, bucolic adventure where you play as a JRPG chemist.

For fans of cottagecore and tweeness, the cosy genre, as typified by Stardew Valley and Animal Crossing, is like coming home. Eschewing violence, bloodshed, and horror – as well as typical action elements like driving, flying, and sports – cosy games instead tend to feature farming, friendship, and purely cosmetic home decoration. It’s a genre where the world is a small welcoming village, and nobody has surface-to-air missiles.

That’s just the sort of place you’ll find in Potion Permit. Its village of Moonbury is more or less what you’d expect from the genre: an isometric cute-fest that includes both people’s houses and businesses. As such, you play a chemist sent from the capital city to help heal the mayor’s daughter, whose illness has baffled the local herbalist.

But there’s a problem. The people of Moonbury have had a bad experience with a big city chemist in the past, and as well as your job healing the sick and injured you’ll also need to work to persuade residents that you’re not some sort of charlatan sent to fleece them of their cash and livelihoods. To that end you’ll be brewing potions but also going out of your way to win friends.

Rather prosaically, you do that by talking to villagers, which increments their friendship bar by a small amount. You can also give them a present, but there’s only one thing you can give to absolutely everybody, and you can only give it once to each resident, so conversation is your most effective tool in talking the town round to your perspective. Raise their friendship bars enough and you’ll trigger a Stardew Valley heart event-style cut scene.

More of your time, though, is spent healing the sick. Your house is built next door to the town’s clinic, and some mornings when you wake up, you’ll be warned by a siren that someone’s in need of your doctorly ministrations. That starts with looking into their complaints, which usually revolve around a ‘weird feeling’ in a particular limb.

Drawing a magnifying glass over the afflicted part starts a brief mini-game (rhythm action, dodging blobs, or Simon-style memory tests), which once completed tells you what potion you need to cure their pain. Mixing potions means filling a blocky grid with ingredients that perfectly match its shape, with no ingredient overlapping or sticking out of the side of the grid. That’s initially very simple, but gets more complex when some potions will only let you use ingredients from specific groups of elements.

Actually getting those ingredients is where you’ll spend most of your time. That means heading out into the wilderness to look for rocks to break, trees to chop down, and herbs to harvest. You’ll also find various breeds of monster, each of which drops a unique potion ingredient. Both monsters and plants only occur in certain areas, and you’ll need to unlock more of these as the story progresses, in order to find more exotic beasts and plants.

Slowly unlocking the game’s landmass and upgrading each piece of equipment you use is as compelling as ever, but unfortunately also proves to be Potion Permit’s Achilles heel, because the process of undertaking all its tasks is just not quite fun enough. Mini-games are overly simplistic and way too easy, and breaking rocks using multiple presses of the hit button is just as stimulating as it sounds, i.e. not at all.

This issue is compounded by the massive amounts of material you’ll need to complete an upgrade. Renovating your cottage’s kitchen to let you cook food demands 325 stone. Cracking blocks of stone takes three or more hits if you’ve upgraded your hammer, and typically supplies six to eight pieces of stone, so you’ll need to spend day after in-game day hammering away at boring rocks to get enough.

But it’s not enough. You’ll also need 1,750 coins and 275 wood. After the first few hours, money is rarely an issue given the flow of patients through your clinic and the ability to sell excess potions, but the wood you’ll need has to be acquired in a similarly will-to-live-eroding manner. Plus, you’ll need extra ingredients because you’re never quite sure what potions you’re going to need on any given morning at the clinic.

Potion Permit gets a lot right. Its visuals are cute and it absolutely nails the earnest dialogue of 16-bit Japanese role-players, which adds immeasurably to the sense of cosy nostalgia. If only it hadn’t also nailed the intense grind needed to complete a lot of those early games, and the tedious over-reliance on fetch quests.

The latter is partially mitigated by the game’s fast travel system, but that also suffers from bugs that render it unusable on occasion. One teleport site next to the game’s fishing supplies shop, which is in a remote corner of the map and yet still a reasonably frequent destination, simply never works. Each time we tried to travel there it would beam the hero to an inescapable area of the map, forcing a restart of the day, in the process losing any progress we’d made.

Potion Permit’s brand of mellow village life provides a similar hit to other games in the genre. There’s also a lot of content to discover, provided you can deal with the cruelly joyless rock breaking and tree chopping you have to endure to get there. If the cuteness is enough to get you over that hurdle, there’s plenty to like.

In Short: A cosy game of potion manufacture, healing, and friendship set in a delightful isometric world, that’s let down by its grinding repetition and some serious bugs.

Pros: There aren’t many games where you play a humble chemist. The devotion to non-violence is a pleasure and the atmosphere and dialogue conjure up the purest form of 16-bit JRPG nostalgia.

Cons: With so much grinding the essential dullness of the activities feel more like penance than fun, and for a game with such simple graphics it has surprising technical difficulties.

Xbox Game Pass For PC Will Soon Be More Expensive

Top Of The Table – Small World Of Warcraft

Have A Listen To PS5’s Menu Music And UI Sounds