After retrieving the Phase Quartz from Blizar Prime, Rivet heads to Torren IV to find the fixer. This is one of the shortest planets in the game, accounting for little more than a detour for Rivet and Clank. Here you’ll find just one armor pieces, two gold bolts, and one spybot. You should be able to easily find all of the hidden collectibles on your first and only visit to Torren IV.

Before we start, here’s a full map of the planet with the location of all of the collectibles marked in case you just want to find them for yourself.

Start by heading straight forward down the path away from your ship. Kill the enemies that spawn until you reach a fork in the road. Head to the right and hold R1 to boost yourself over the ramp. Boost over the next ramp, then run on the wall and grab the swingpoint ahead. Grab the first gold bolt and three boxes of Rartitanium on the other side. Boost down the green ramp to get back to the fork in the road you were just at. 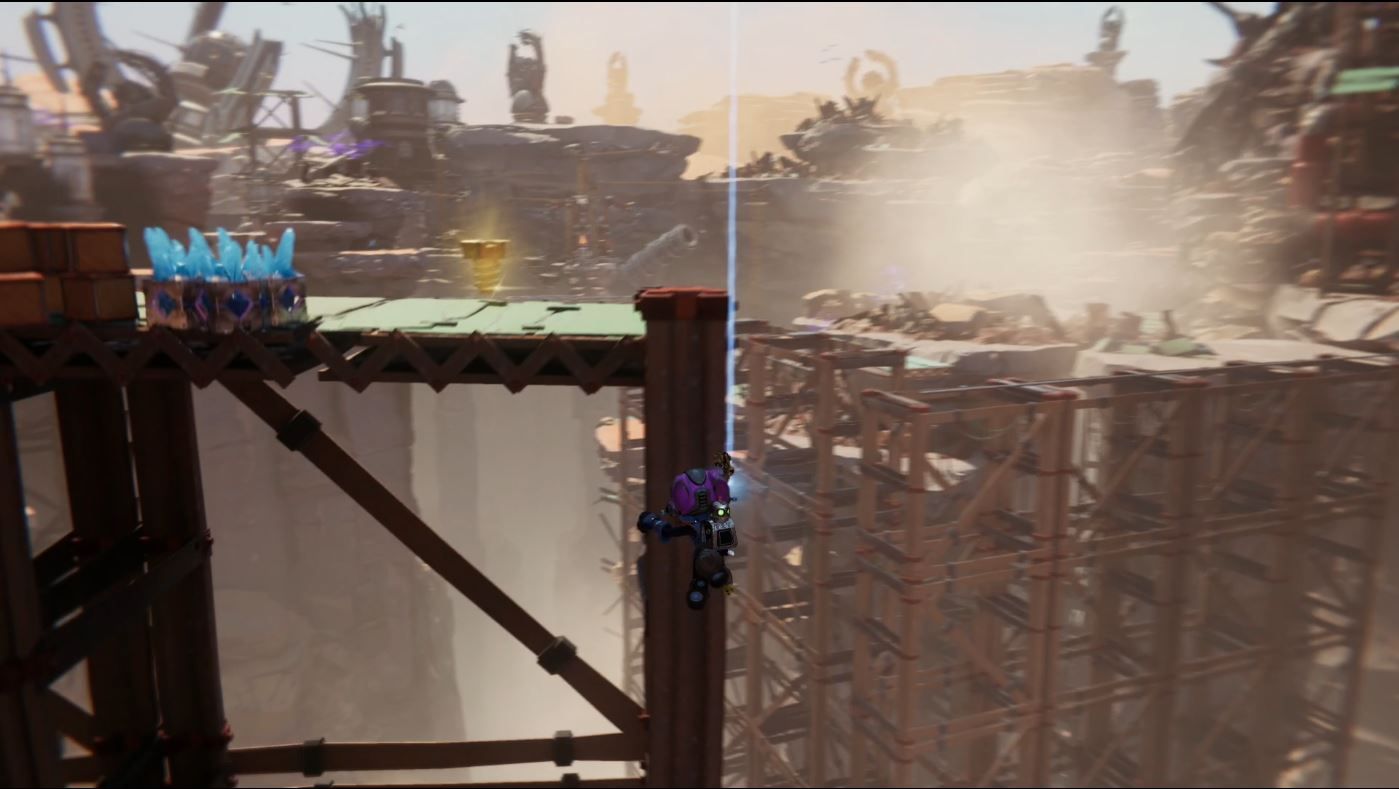 Grab the swingpoint on your right and run along the wall, grabbing yet another swingpoint to fling yourself into Little Junktown. There’s a detour you can take immediately to the right up a ramp. Follow this path until it turns into a spiraling Mag Surface. At the bottom you’ll find the spybot as well as some Raritanium. head back up the way you came.

Back on the main path, head towards Ms. Zurkon and pause for a cutscene where you’ll meet Vullard. When the cutscene ends, jump forward and make your way up the platforms ahead. When you see the Crabs on your left, keep going forward onto the high platform ahead of you to find a Raritanium. Fight the crabs and continue along, pasat the frogs and flies, until you find the grind rail on your right. With your back to the grind rail, walk forward through the round tunnel. On the other side are some boxes and more Raritanium. Head back out and jump on the rail.

You’ll need to jump back and forth between two rails to dodge trains and jump over gaps. When you see the red circular force field, jump on the left rail then immediately pull yourself through the rift on your left. This will bring you to a separate rail where you can collect the second gold bolt. If you miss your chance to pull yourself through this rift you’ll have to come back and do this rail section again once you’ve completed the story on this planet. After you get the bolt, pull yourself back to the main rail when you next see a rift, then continue until you see a swingpoint. Jump onto the slide, ride the trash, and swing back onto solid ground. 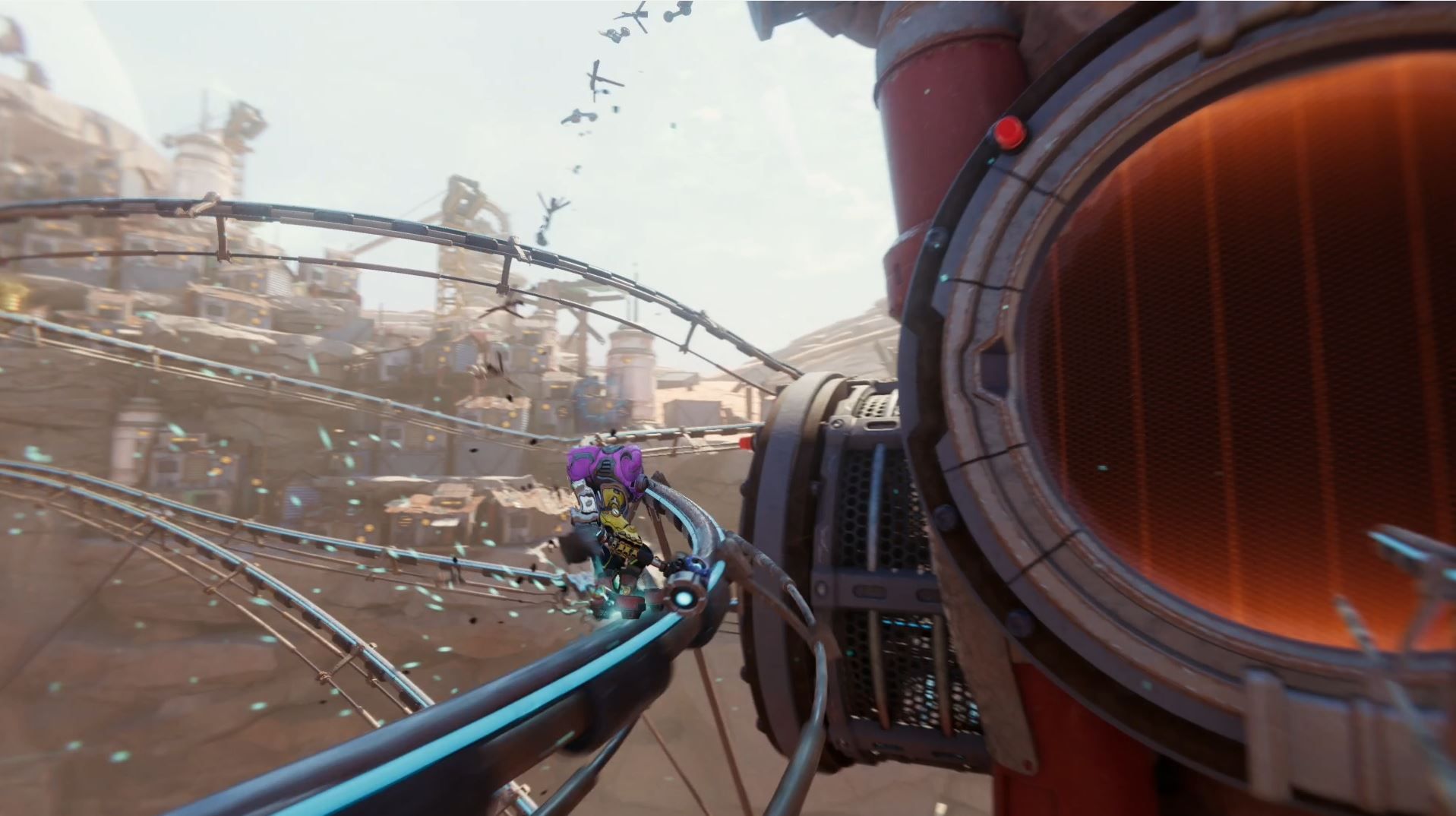 Pierre and his pirates arrive to cause some trouble for Rivet. When the cutscene ends a fight will start that introduced a new enemy type that uses shields. You’ll need to use indirect damage like bombs to get past their impenetrable shields. The Ricochet is one of the best weapons to use against these enemies. If you’re forced to take a direct approach, the Negatron Collider can punch through their shields with enough direct hits. Grab the Rartianium at the edge of the map then activate the switch to unlock the hurlshot upgrade. 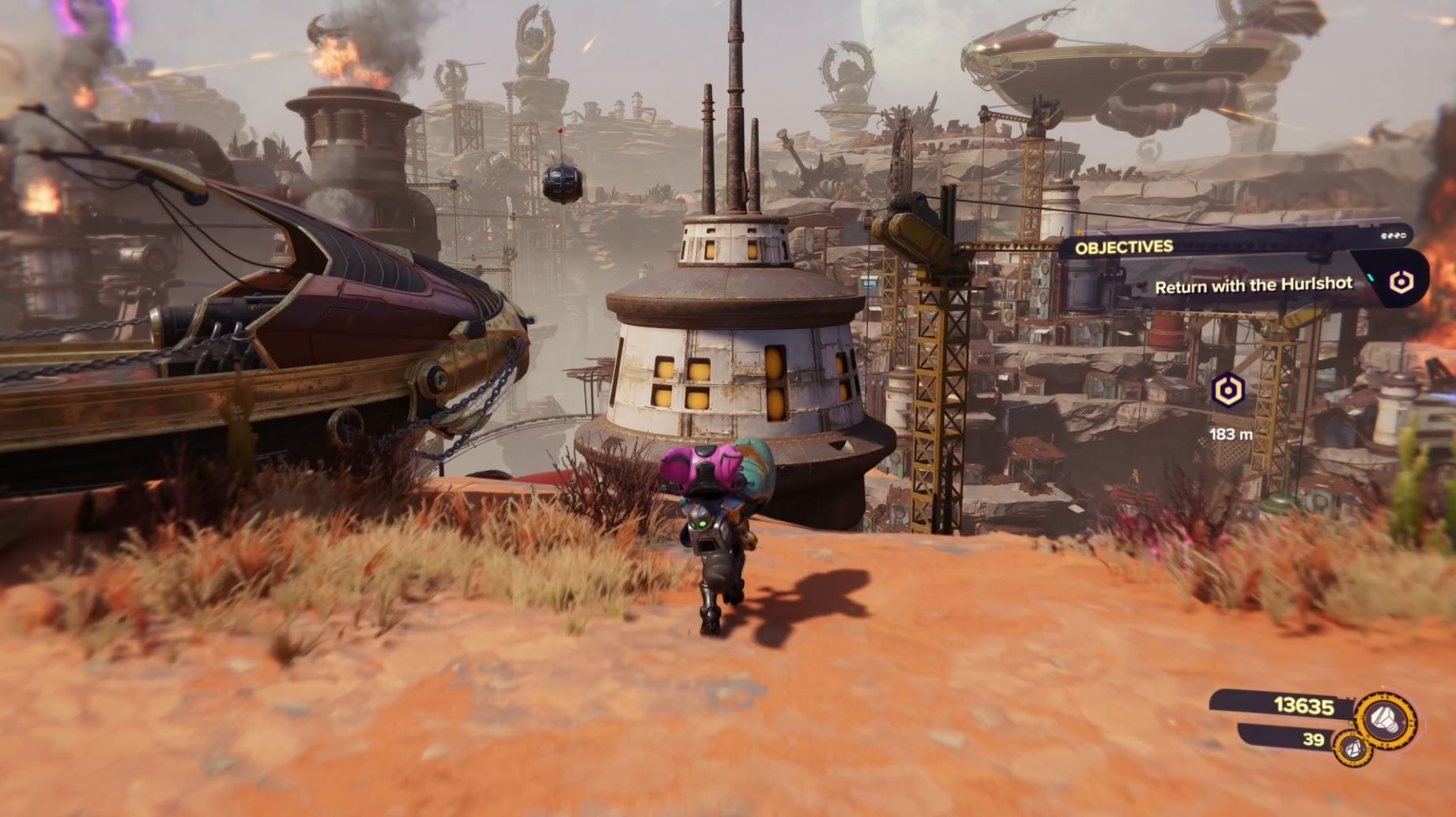 Swing onto the ship and clear all of the enemies, then fight the “Wee” Roger. This mini-boss fights just like Francois at Zurkie’s, so dodge his slow rocket attacks and move out of the way when he tries to jump on you. Once “Wee” Roger is defeated, Pierre will instruct his pirates to destroy the ship you’re on. When the cutscene ends you’ll find yourself back in Little Junktown.

Hit up Ms. Zurkon and pick up the Glove of Doom if you can afford it, then turn around and use the swingpoint with your new hurlshot upgrade to launch yourself onto the island to the northeast. Kill the crabs and flies here as you make you way forward towards a swingpoint. Before your leave, look to your right and you’ll see a portal to a pocket dimension tucked in a small cave.

This pocket dimension features the return of the Skeetle from Sargossa. If you don’t remember how these works, just hit the nest ahead of your with your hammer to spawn the Skeetle, then press triangle to mount it. You” need to press R1 just before you reach the end of every ramp in order to pick up enough speed to launch yourself onto the next platform. 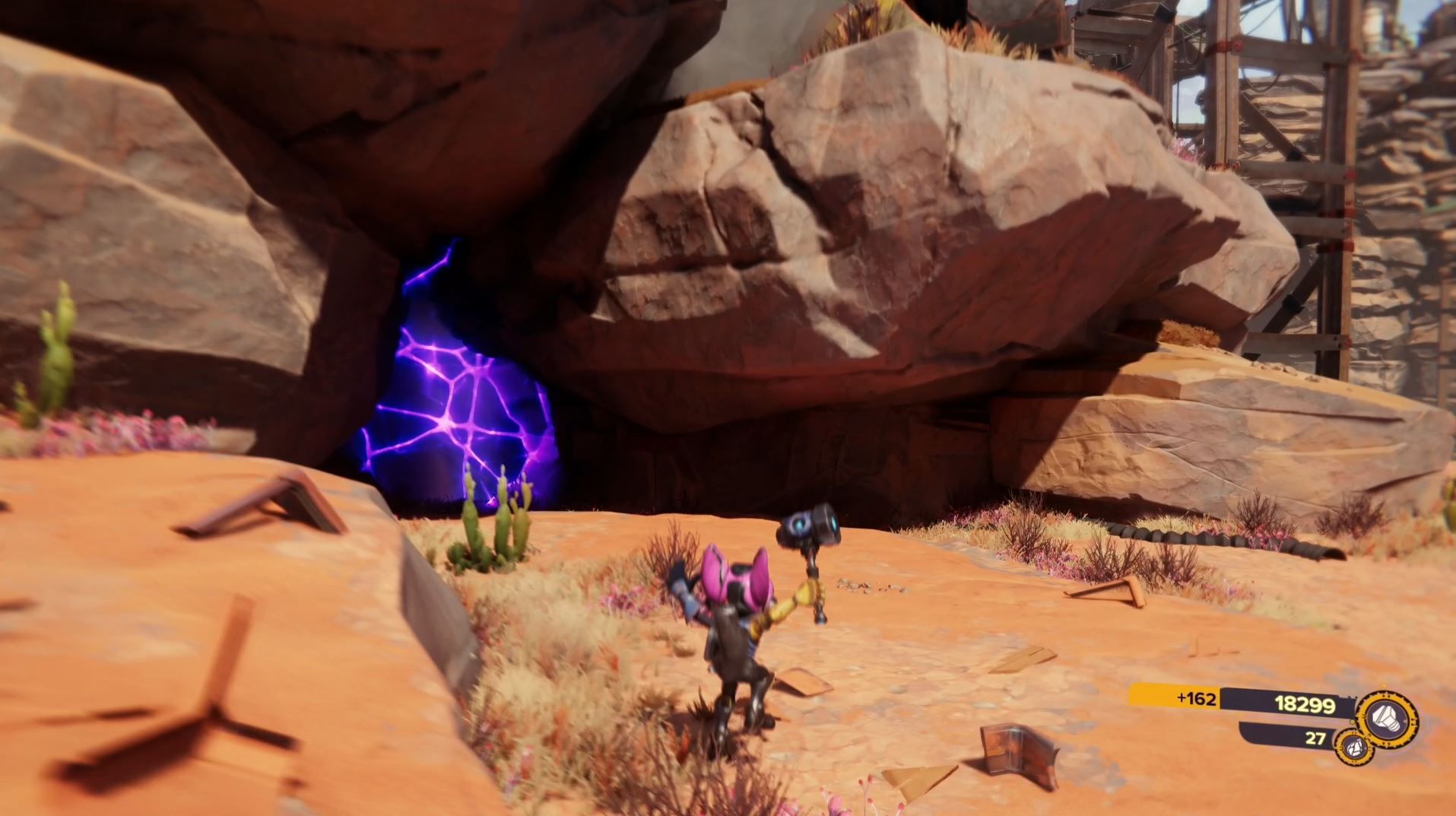 The pat forward starts to the left of the island, wraps around clockwise towards a ramp, then follow a series of ramps going clockwise. When you reach what appears to be a dead end, turn left and you’ll see another ramp. Launch off of a quick series of three ramps and you’ll find your armor piece at the end. Pull yourself through the rift to return to the entrance.

Back on Torren IV, turn right and grab the swingpoint. You’ll need to hurl yourself between two points and land on a long arena where you’ll fight lots of pirates. There are a few rifts scattered around that will help you take the high ground or get away from the swarms of robots if you start to get overwhelmed. Keep an eye on the long range pirates that will spine you with lots of small attacks. You can use some of the high platforms for cover as you fight your way forward.

When you’ve killed everything here, use the yellow swingpoint to hurl yourself over to the next island where “No-So-Wee” Roger is waiting for you. At this point you’ve fought this mini-boss type several times, so just dispatch him with your favorite weapons. When he’s dead, press R1 to launch yourself over the booster, run on the wall, and land on the island on the otherside. 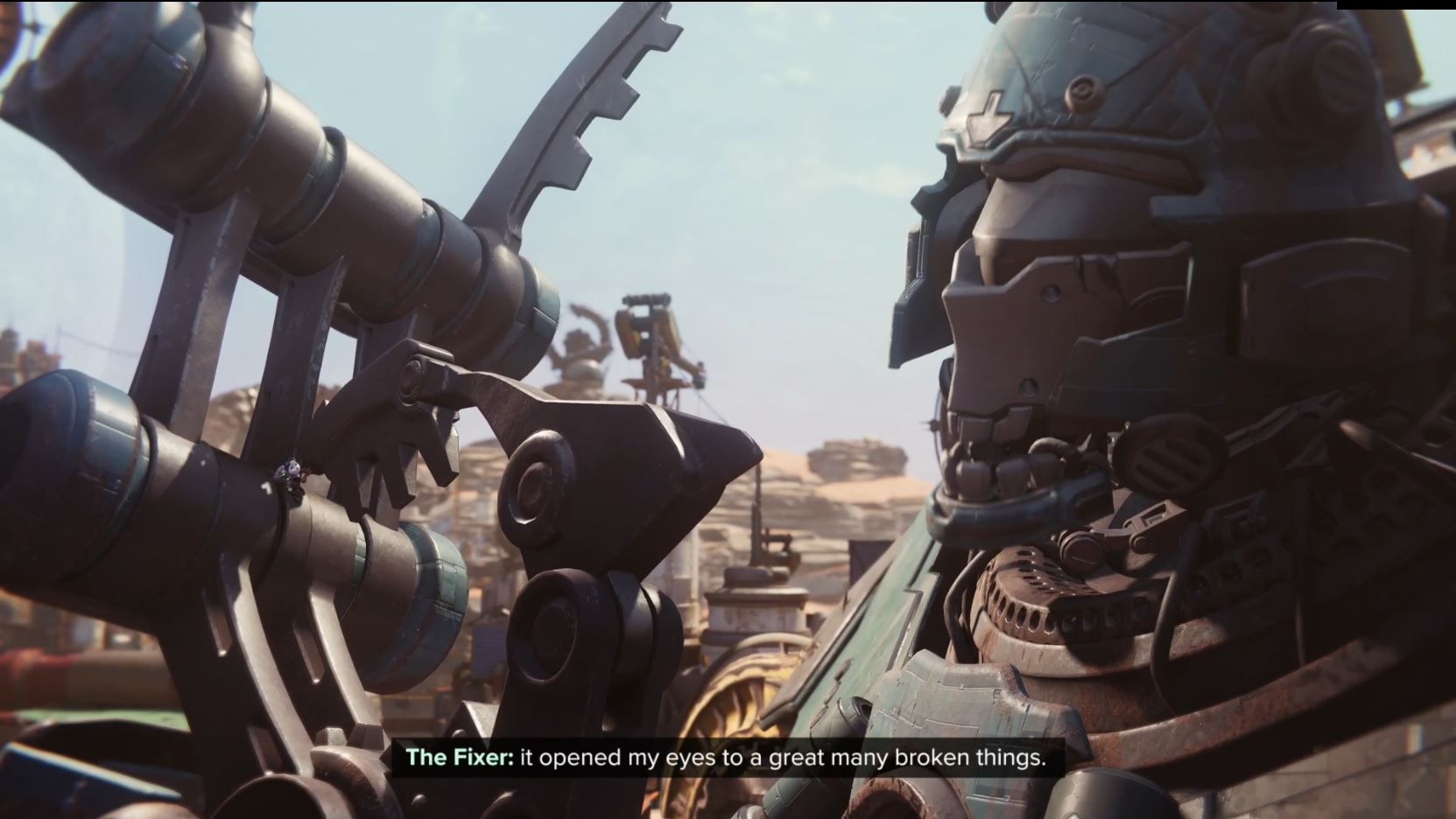 Fight some slime boys here and grab the pile of Raritanium in the corner, then turn around and use the rift to pull yourself back to where you just were. Now, look for the yellow swingpoint and hurl yourself forward from one point to the next until you reach the rail. Swing, run on the wall, and pull yourself through the rift at the end. Grab the Raritanium on your right and activate the switch to reboot the Fixer.

The “fight” with the Fixer is a long sequence of rail grinds, wall runs, and hurlshots. It’s very straightforward but highly cinematic. Make sure you pull yourself through any rifts you see as soon as they turn yellow, and don’t miss the Raritanium scattered along the path. Just hit the crystal with your hammer as you pass by. Eventually, Rivet will get caught by the Fixer, and it’s up to Clank to save the day.

With the Phase Quartz repaired, it’s time to head back to Zurkie’s to finally meet up with Ratchet and Kit.