Rogue Legacy 2 scratches an itch that few games do. It features a gameplay loop where every mechanic feels like it’s building towards progression, providing a worthwhile sense of satisfaction each and every time you start a level and meet your death at the hands of fireball lobbing skeletons and spooky floating ghosts. Even in defeat, you’re moving forward and carving out a legacy that will see kingdoms rise and tyrants fall.

The only game I can think of that even comes close to its level of brilliance is Hades. Supergiant Games manages to outshine this quirky royalist slasher with a phenomenal narrative and characters who have developed lives of their own outside the universe that spawned them. Rogue Legacy 2 understands why the genre has become so beloved while simultaneously building upon it in ways that feel equally challenging and approachable.

I have always struggled with roguelites, partly because I struggle with the idea of starting each new run with nothing, having little to show for the time invested only to have myself murdered by a difficult boss battle or sudden cabal of procedural enemies I had no way of anticipating. Hades and Rogue Legacy 2 still trade in these fundamentals, but they both understand that to become engrossed in the adventure you need something to show for it. 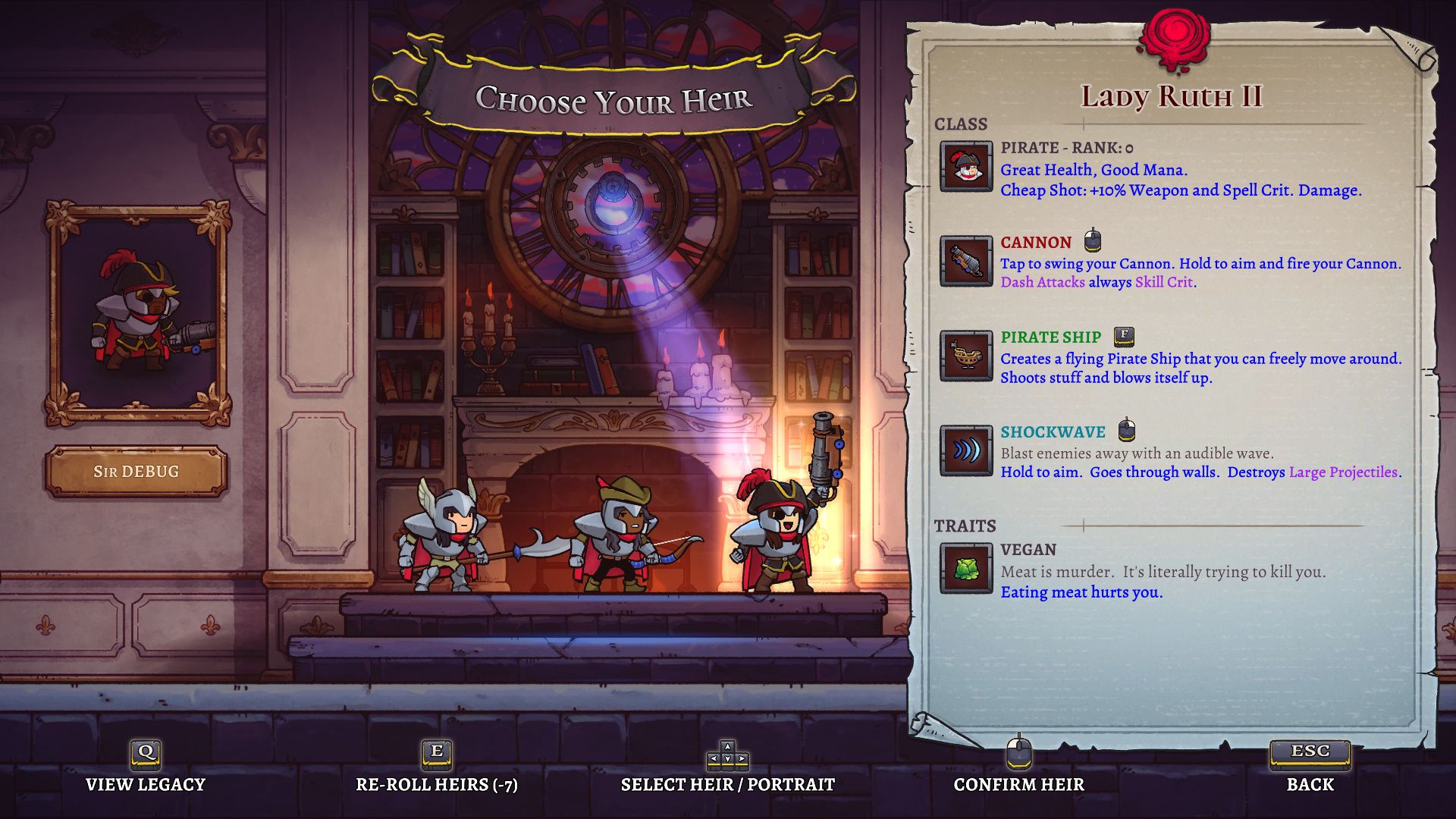 From your very first run it is clear in Rogue Legacy 2 that each death is a step forward. Each enemy slain rewards you with coins, while the majority of rooms feature worthwhile treasures or secrets to discover that heighten your knowledge of what it means to navigate this labyrinthine environment. Obstacles are relatively easy to navigate, while the majority of enemies operate in attack patterns that invite us to learn and take advantage of them with our own repertoire of skills. Nothing feels unfair, and seldom does the game seek to punish you for the hell of it just to showcase how impenetrable this genre can sometimes be.

It’s the opposite, and that’s what makes it so brilliant. Much like Hades, the act of failure becomes something to look forward to. Your run might be over, but you’ll now be thrust back to a hub world to interact with characters and purchase upgrades that will make your next attempt the slightest bit more manageable. Progression might feel glacial at first, but when you start purchasing new classes while slowly increasing individual attributes your power builds up in a way that will soon be very tangible indeed. It’s incredible, and I imagine Cellar Door Games opting for an early access approach for its sequel allowed it to curate each and every part of the experience to ensure nearly all of it elicits satisfaction.

For a sequel coming out several years after its predecessor, the differences between Rogue Legacy 2 and its predecessor might appear rather slight. The gameplay loop is the same, its sense of humour remains unchanged, and even the controls seem near identical. It’s an iterative advancement of what came before instead of seeking to rewrite the rulebook, but let’s be honest its predecessor was excellent in its own right so why change what doesn’t need fixing? Instead it’s a mixture of subtle advancements and worthwhile expansionist elements to environmental design and character classes that lend combat and exploration so much more depth. A complete run of this game feels massive, like you’re embarking on an epic generational journey that will take decades upon decades to complete as you whittle down your quirky family tree.

Rogue Legacy 2 seems to have emerged in a quiet spell and doesn’t have the privilege of launching on Xbox Game Pass or a similar service to attract an immediate audience. But if you’re a fan of other games in the genre or even want to dip your toes in for the first time, be sure you don’t sleep on this one and give it a shot. By all accounts, it’s something special.

How To Play As The Guardian Angel In Among Us