Sackboy: A Big Adventure is a voyage through the realms of the imagination. Across six worlds, you will encounter a huge variety of locations, characters, and creatures, all rendered in the dazzling colours of the Imagisphere. In short, the game is a 3D platformer fan’s dream.

But where there are dreams, so too are there nightmares. In between bouts of platforming perfection, Sackboy’s players will need to tackle the game’s brutal bosses: a series of terrifying guardians who won’t think twice about putting an end to your little life, one pulled stitch at a time. We’ve assembled them all here, a veritable rogue’s gallery, to determine which boss is the baddest of the bad. 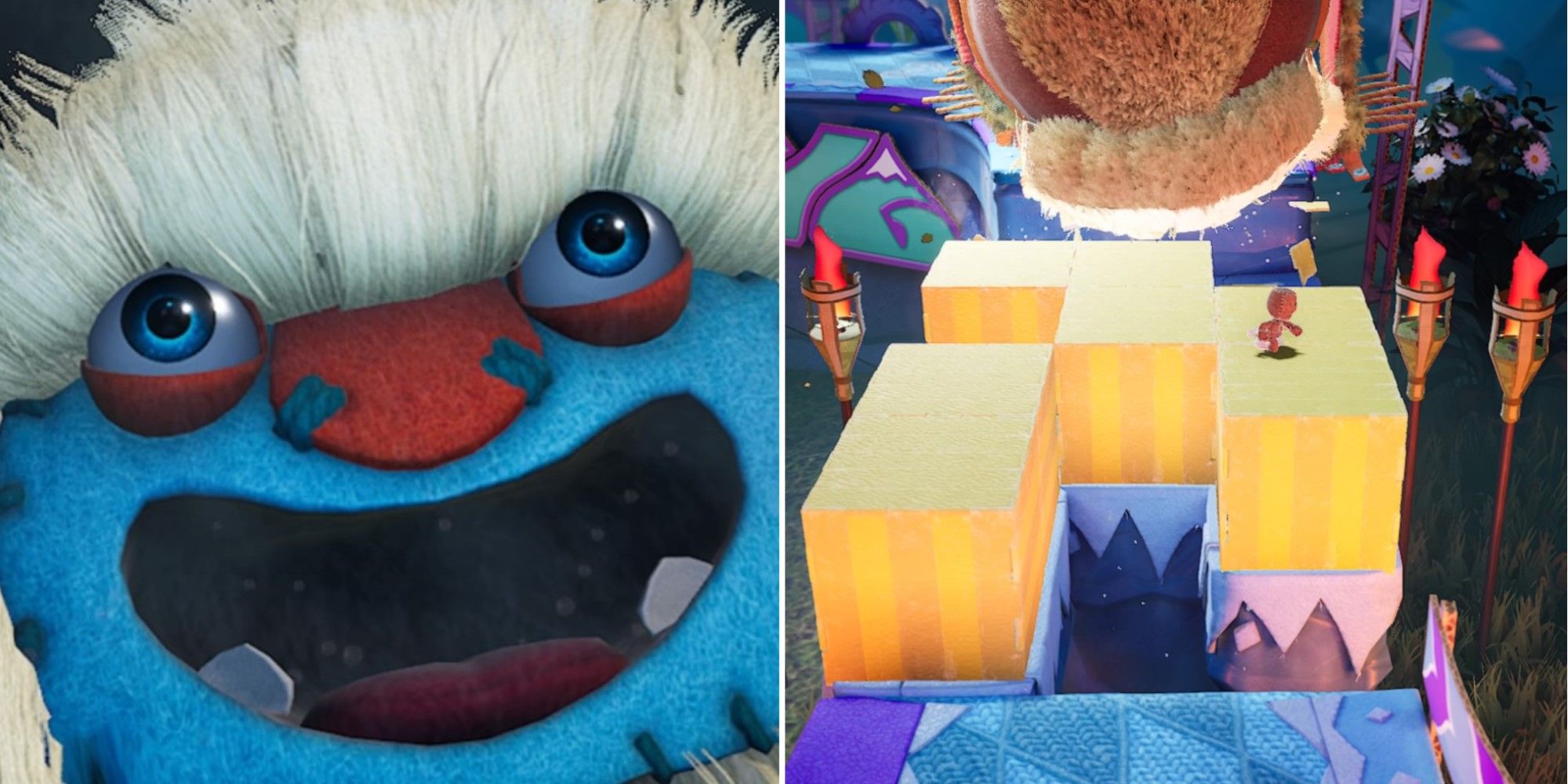 The first boss you’ll face as you scale the Soaring Summit, The Abominable Showman is more of an auto-scrolling platforming section than a full boss fight. The Showman himself even looks quite cheery, as if chasing you in hot pursuit is more of an accident than an act of malicious intent.

That said, he can still prove a challenge for new players, as he represents the first time you’ll really need to hurry up in order to succeed. He also appears unexpectedly at the end of a fairly lengthy level, which can push your endurance to the limit early on. 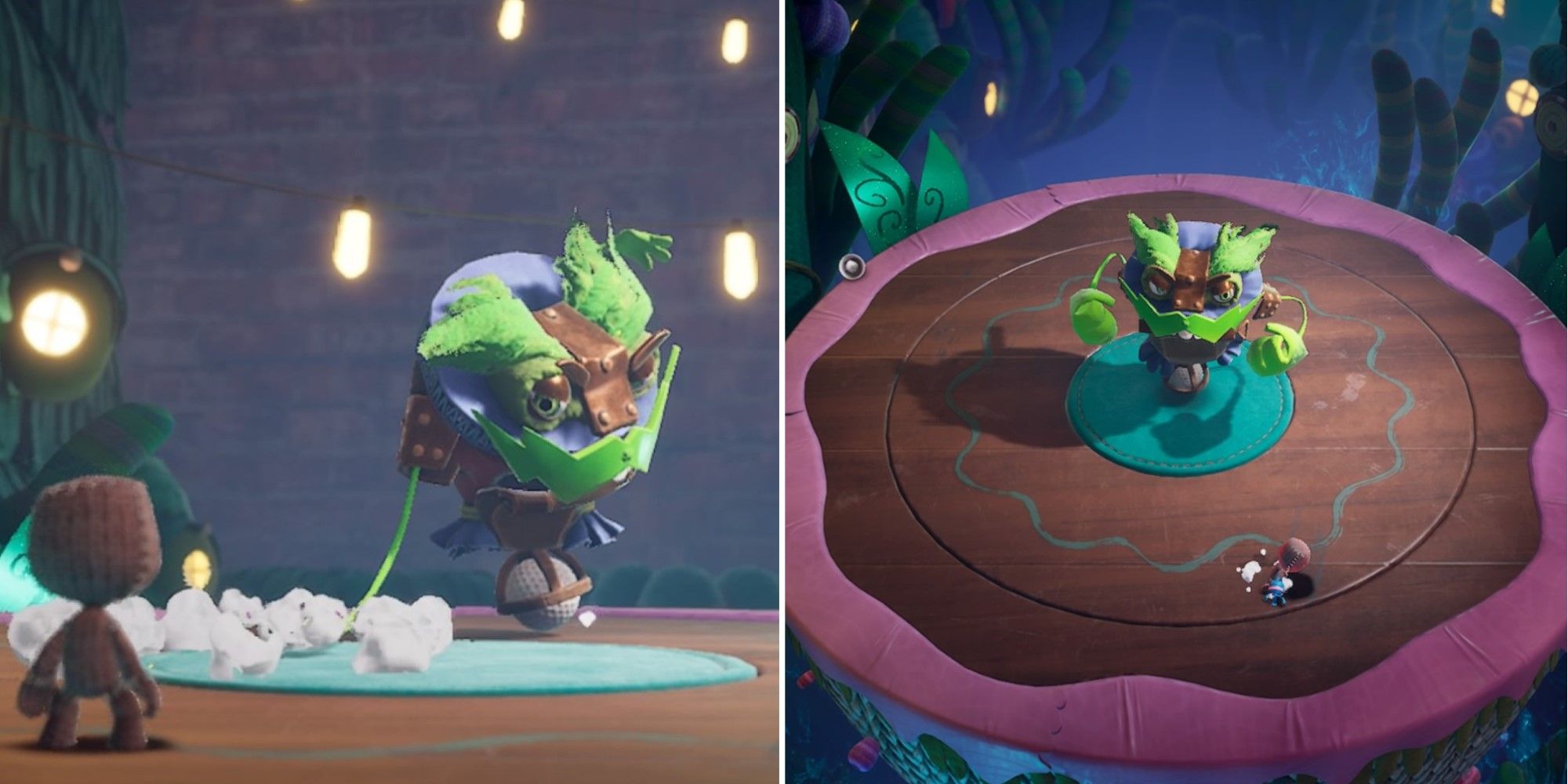 A feisty frog with furious fists, the Ruffled Ruffian can leave you flat on the canvas if you don’t get its attack timings down. Using the Clawgrip to grab the bombs from the side of the arena, while dodging the Ruffian’s heavy downward slaps, the first phase is a chaotic dance.

After a few bomb blasts, things get tricky. The Ruffian starts throwing alternating left and right punches, which can be very difficult to avoid. Once you figure out the pattern, however, you’ll be able to return him to the murky depths from whence he came. 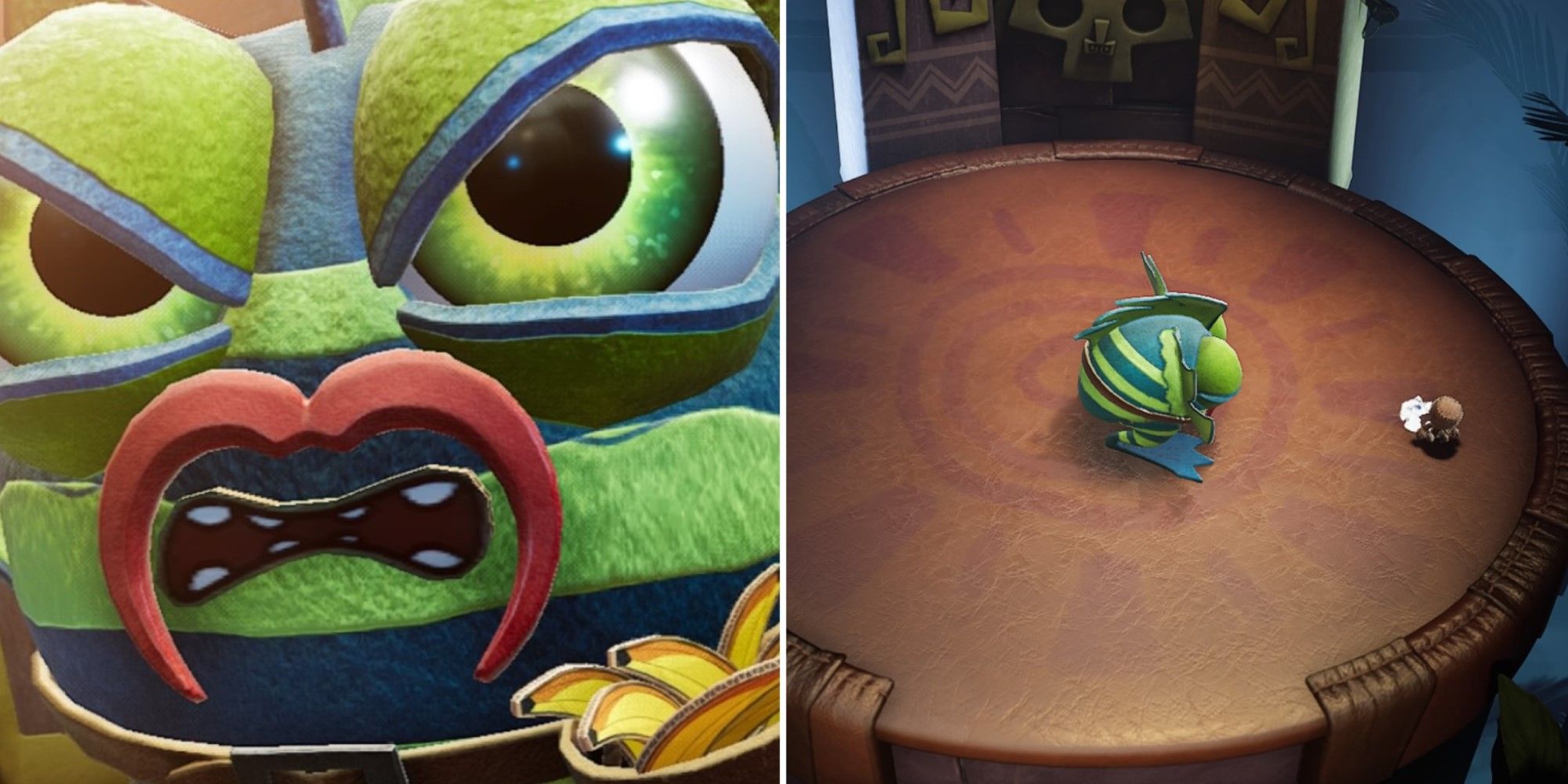 Going Bananas is a tough level on its own, forcing you through a high-speed factory production line with little breathing room. Just when you think you’re done, the Banana Bandit drops in to block your path. He has a fairly simple moveset, but he still puts up a good fight.

This is largely down to the open structure of the fight; rather than requiring you to wait for a window to deal damage, you can punch the Banana Bandit whenever you want. This baits you into getting cocky and going for too many hits, letting the Bandit catch you with his slam, or the resulting shockwave. Patience is key here, and once you learn when his attack pattern ends, you’ll easily triumph. 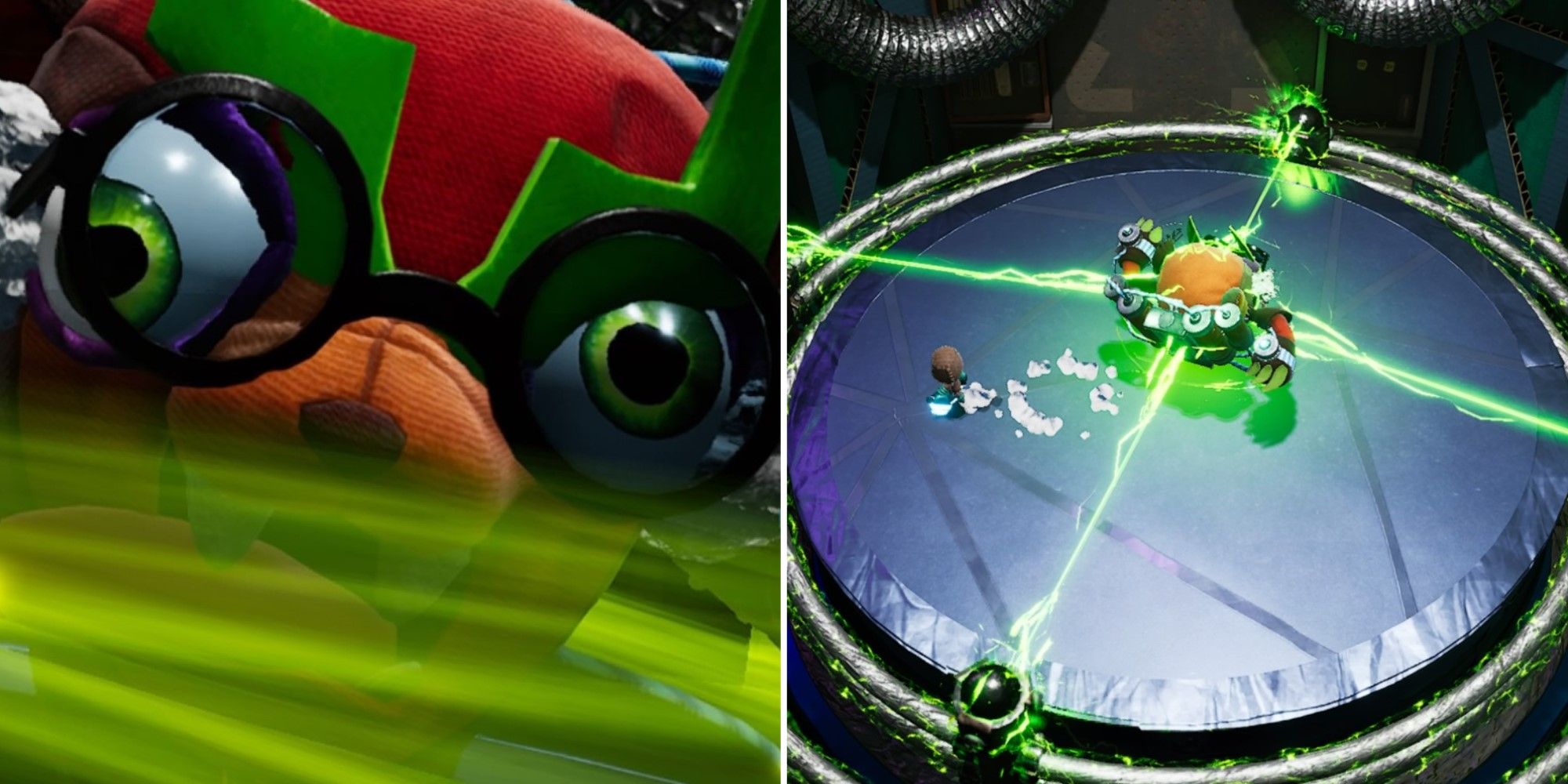 A tricky test of your Plasma Pumps mastery, the Electric Whirlwolf fight is all about dodging laser beams: static at first, then rotating in various patterns. These are complicated by the movements of the Whirlwolf itself, who spins towards you constantly, keeping the pressure on throughout the fight.

You can return the favour, however. The Electric Whirlwolf is vulnerable to shots from your Plasma Pumps for the full duration of the fight, letting you squeeze in quick damage whenever you get a spare moment. This lets you speed up the battle, though the safest approach is to wait until a round of lasers is done and go all in when the shields are down. 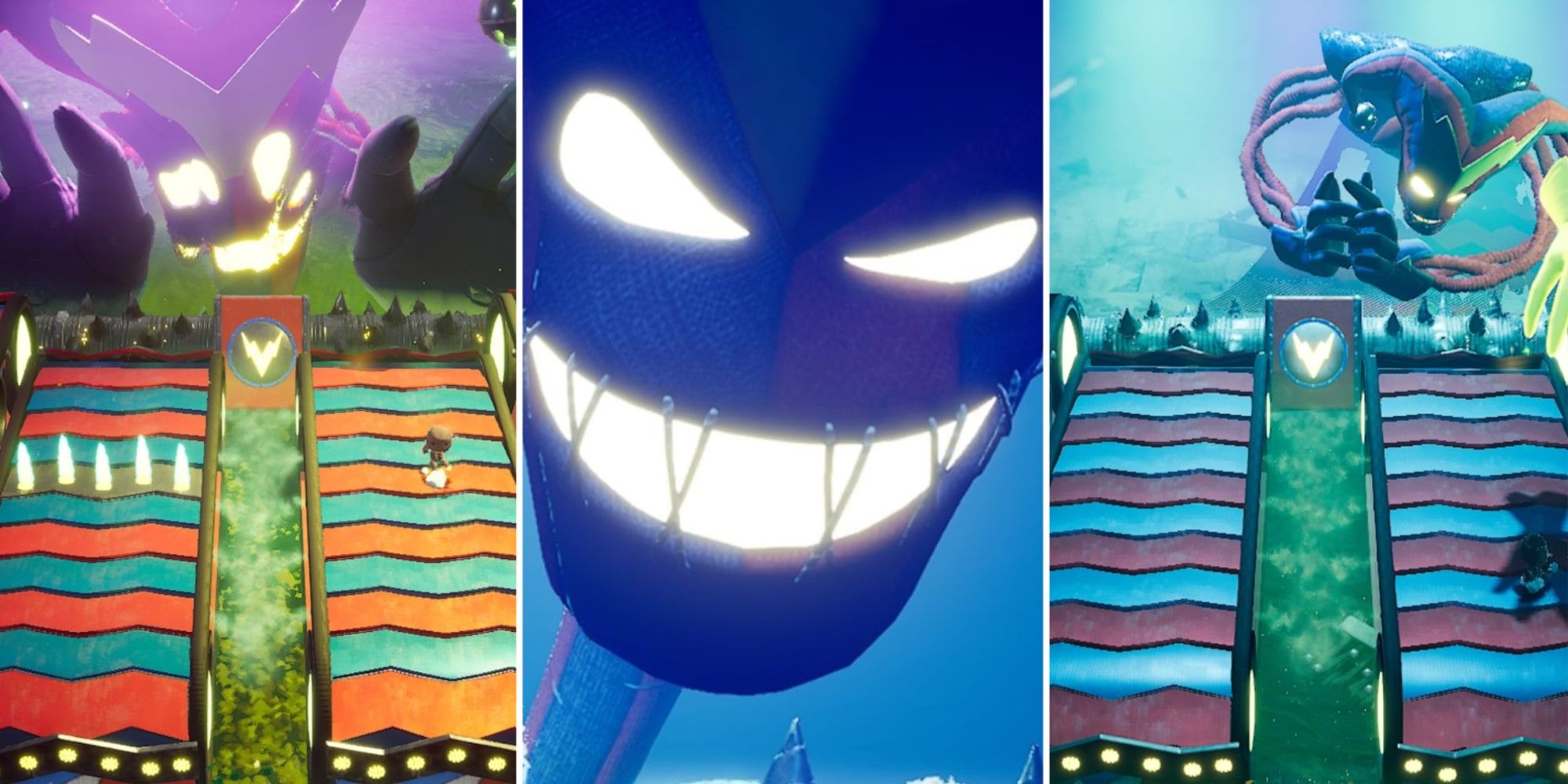 The gleefully evil Vex is a constant thorn in your side for the entirety of A Big Adventure. He appears as a boss in four separate instances, three of which make use of the same core concept: Vex assaulting you with a barrage of attacks while you struggle to keep your bearings on a quartet of treadmills.

Each time you encounter this fight, it escalates in difficulty: more spikes, more directional shifts, and eventually added jumps and rolling spike pillars. The end result, once everything is layered on, is a gloriously hectic battle that puts your precision platforming skills and reaction times to the test. 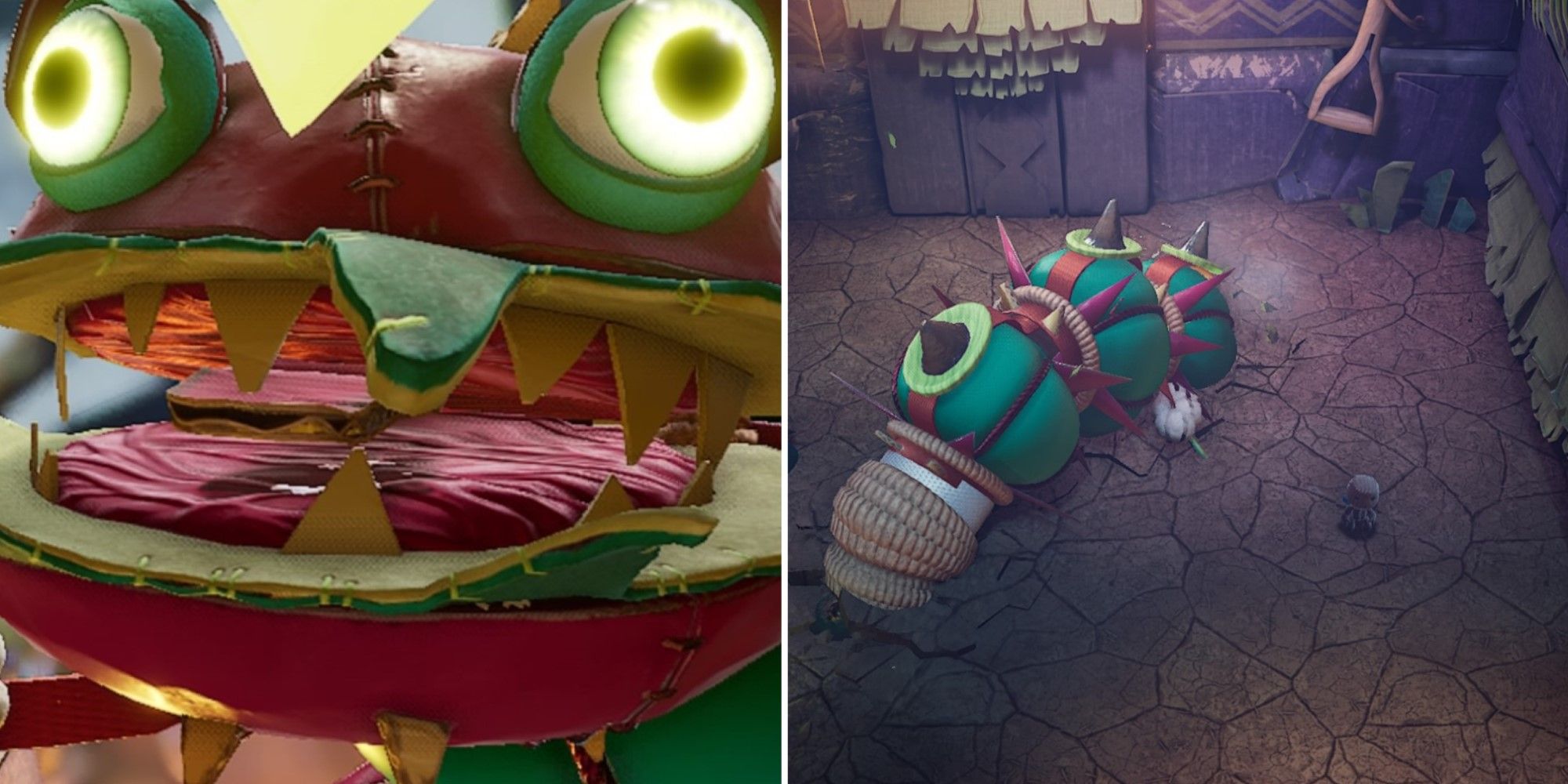 A tried-and-tested staple of the videogame boss lineup, the giant centipede appears in everything from Dark Souls to Super Mario. Sackboy’s take on the concept, the Vexed Mamapede, is the final challenge awaiting you in the Colossal Canopy, and requires precise use of the Whirlitool to bring down.

A lot of the fight consists of avoiding the thorns that appear as the Mamapede burrows below the surface of the arena, then striking with rapid Whirlitool throws during the brief windows when she’s vulnerable. It’s a long fight, since you’ll rarely be able to take out all of her segments in a single cycle, so come prepared to endure for a good while. 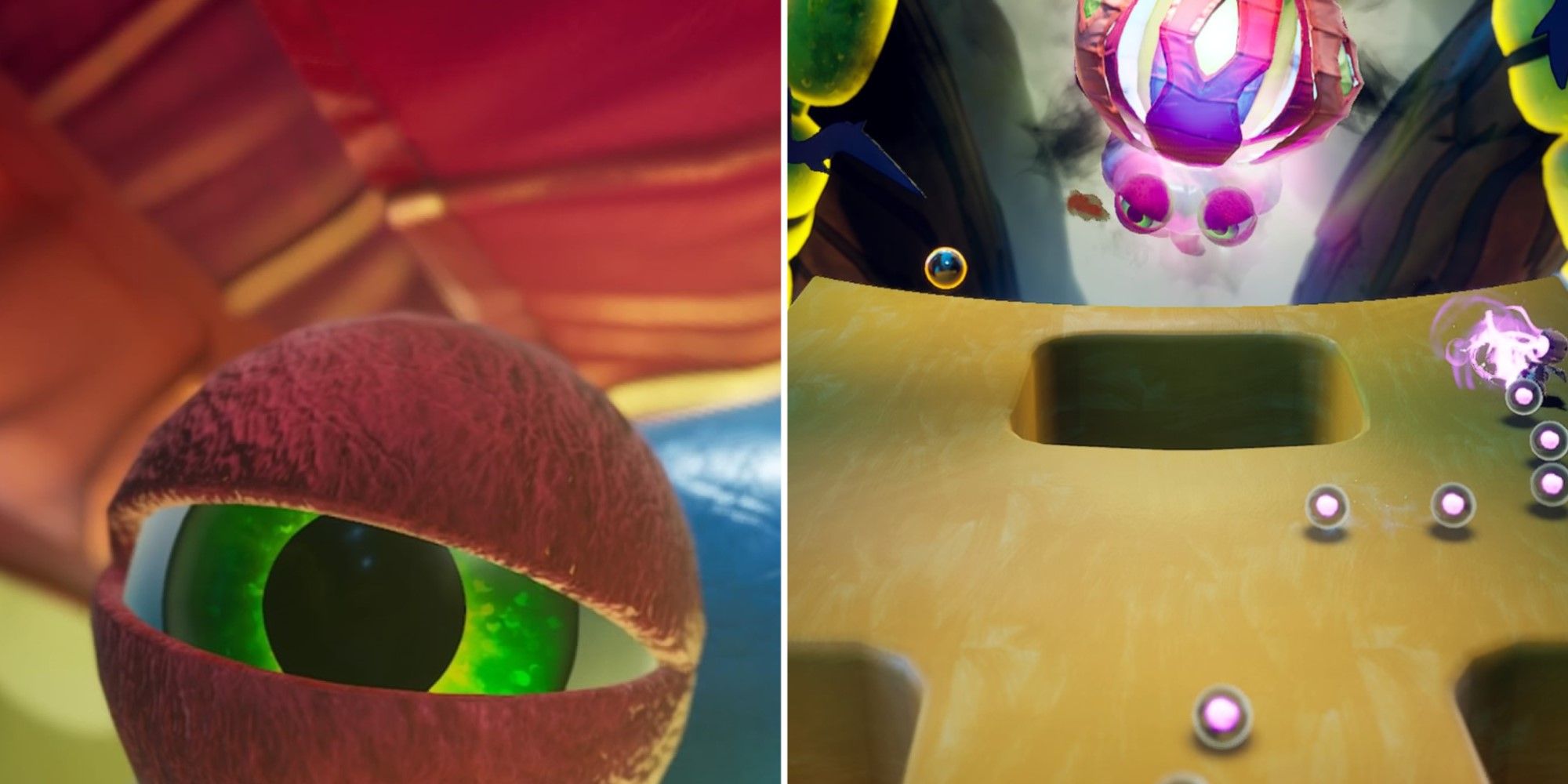 A clever use of the phase light mechanic, The Giant Befuddler pursues you into the screen, shaping the geometry of the level with its aura. It’s a creative take on the chase sequence concept that appears throughout the game, and one that forces you to maintain full concentration to see where the next platforms will appear.

This is a cool way of expanding a non-combat mechanic, that of the phase light, into a boss fight, and also a relentless challenge: the chase begins as soon as you drop into the level, and doesn’t let up until the end, when The Giant has Befuddled itself into the abyss. 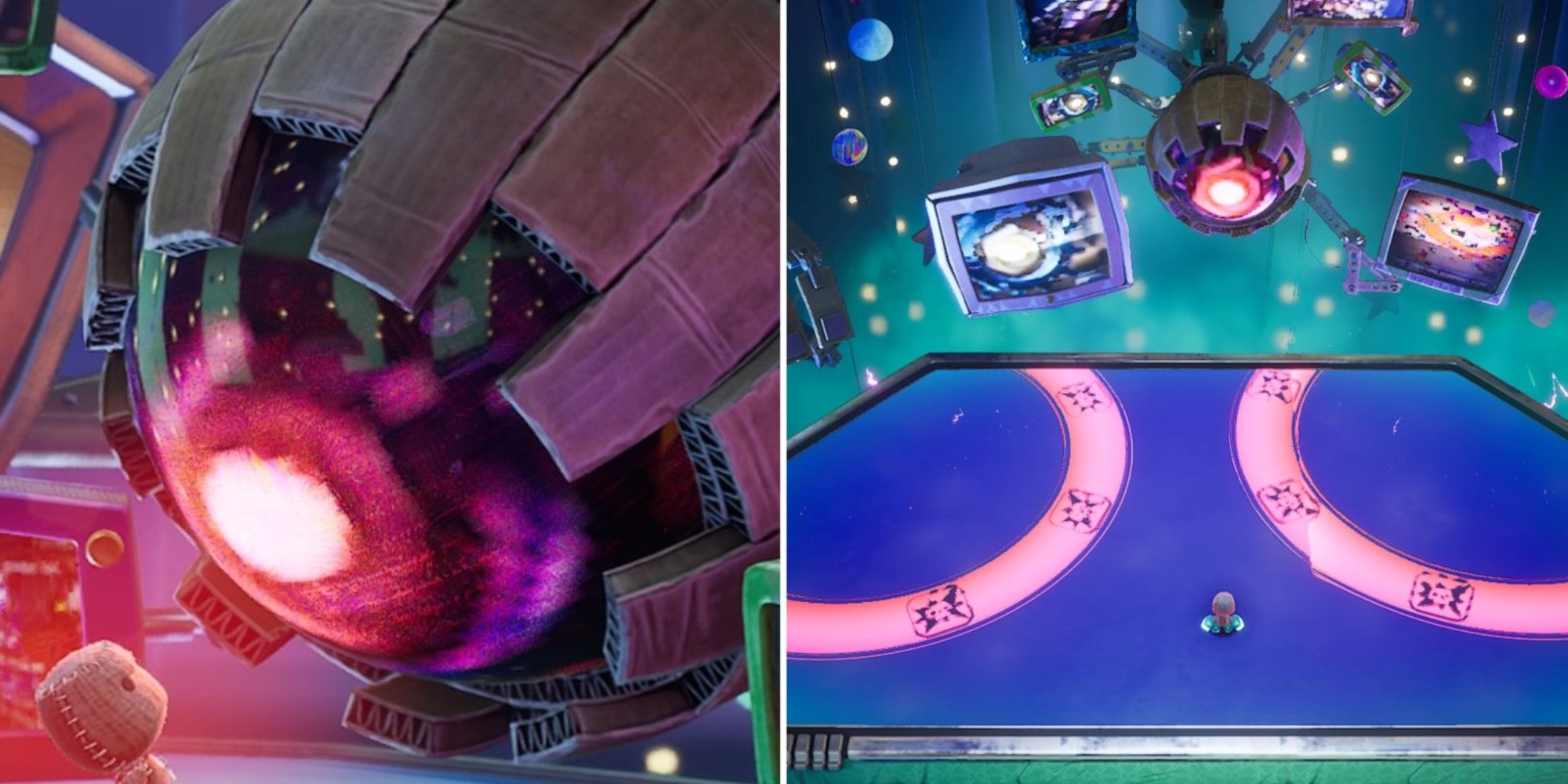 Corrupted by Vex’s dark power, the steward of Interstellar Junction takes a leaf out of HAL 9000’s operating manual and turns on Sackboy. The fight makes full use of the Plasma Pumps, throwing lasers and shockwaves that you need to hover over, while placing pixelated Vex icons in the code as weak points for you to shoot at.

Taking on this boss is, appropriately, like hacking into a computer; you need to press buttons and push lock screen circles on the floor-based UI, eventually unlocking the green monitors where you can deal damage. The fight ends with a flurry of attacks as you scramble to land hits on N.A.O.M.I’s side monitors and core. It’s a thematic and exciting boss that stands as one of Sackboy’s best. 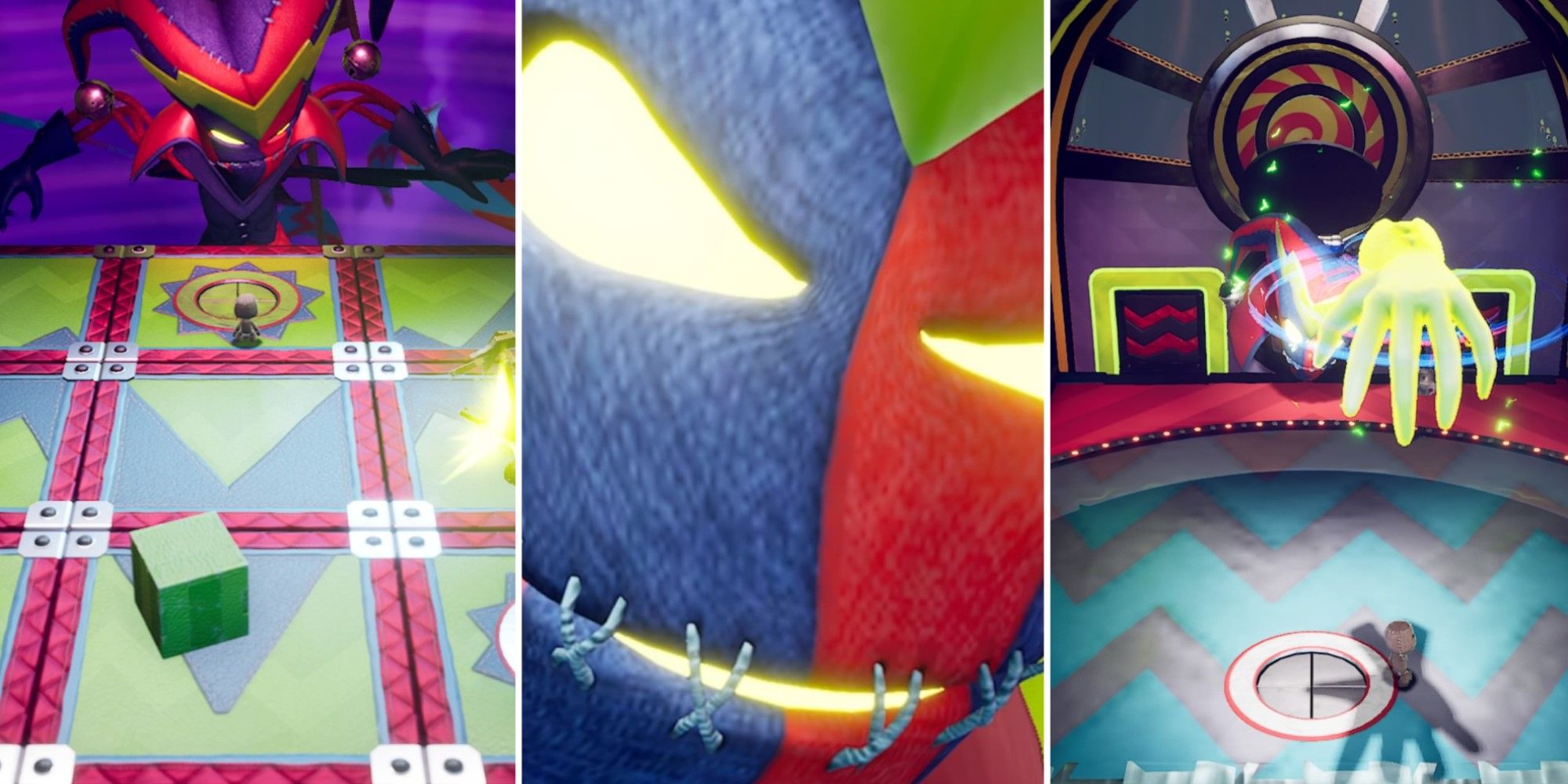 The game’s final boss is also its ultimate test; an epic, multi-phase monstrosity that spans two fights and a platforming section within the Topsy-Turver. Vex is at his most devious here, snapping his fingers to summon spider enemies directly below you, steal lives from your supply, and even transform your co-op partner into an enemy, requiring an attack to transform them back.

This is in addition to the hand slams and enemy summons that Vex employs as standard, both of which are much harder to avoid on the constantly-shifting ground of the final phase. It’s the game’s longest and most difficult boss fight, and it caps off Sackboy’s Big Adventure perfectly.

Ranked: Every The Legend of Zelda Spin-Off Game From Worst To Best