Saints Row suddenly has a lot of empty road in front of it in 2022. It sees itself as one of the big triple-A guns of the world, and by most accounts it is. But in what promised to be a legendary year crammed with Elden Ring, Horizon, God of War Ragnarok, Breath of the Wild 2, Starfield, Suicide Squad, Gotham Knights, and Hogwarts Legacy, it could have been lost in the crowd. Cue delays for Starfield, Breath of the Wild 2, and Suicide Squad, radio silence from God of War, a holiday launch window for Gotham and Hogwarts, and Elden Ring and Horizon already in the rear view mirror, the summer now belongs to Saints Row – it just needs to make the most of its shot. After my hands-off preview, I think it stands a great chance, as long as people are willing to let a few things slide.

Saints Row’s marketing so far has not been great. The initial reveal vastly underplayed how wild and colourful the game is, showing the public far less than the press had been granted access to. Subsequent footage was later uploaded to YouTube, but by that point the tide of public opinion was already swaying against it. That the games new Saints had been labelled 'woke' didn't help, but then people have also complained about Captain America, District 9, Alien, and The Matrix being made woke too. Saints Row has always been woke. Historically, the central character was East Asian, and the cast is widely diverse. If the new game had a sex positive white girl who was always talking about her love for BDSM, we'd all call that cringy, but that's the exact profile of SR3's Kinzie Kensington, one of the most popular Saints ever.

Here's where things get tricky for Saints Row. It feels like it needs to make up ground, and on fun alone, it could get there. This was a hands-off preview, so you're never really sure, but I've sat through enough of these and known the game wouldn't seem any better if it were my hands on the controller instead. From riding around the desert to getting into pyrotechnic gun fights, Saints Row seems like the perfect game to run around causing carnage in, turning off your brain and having a blast. 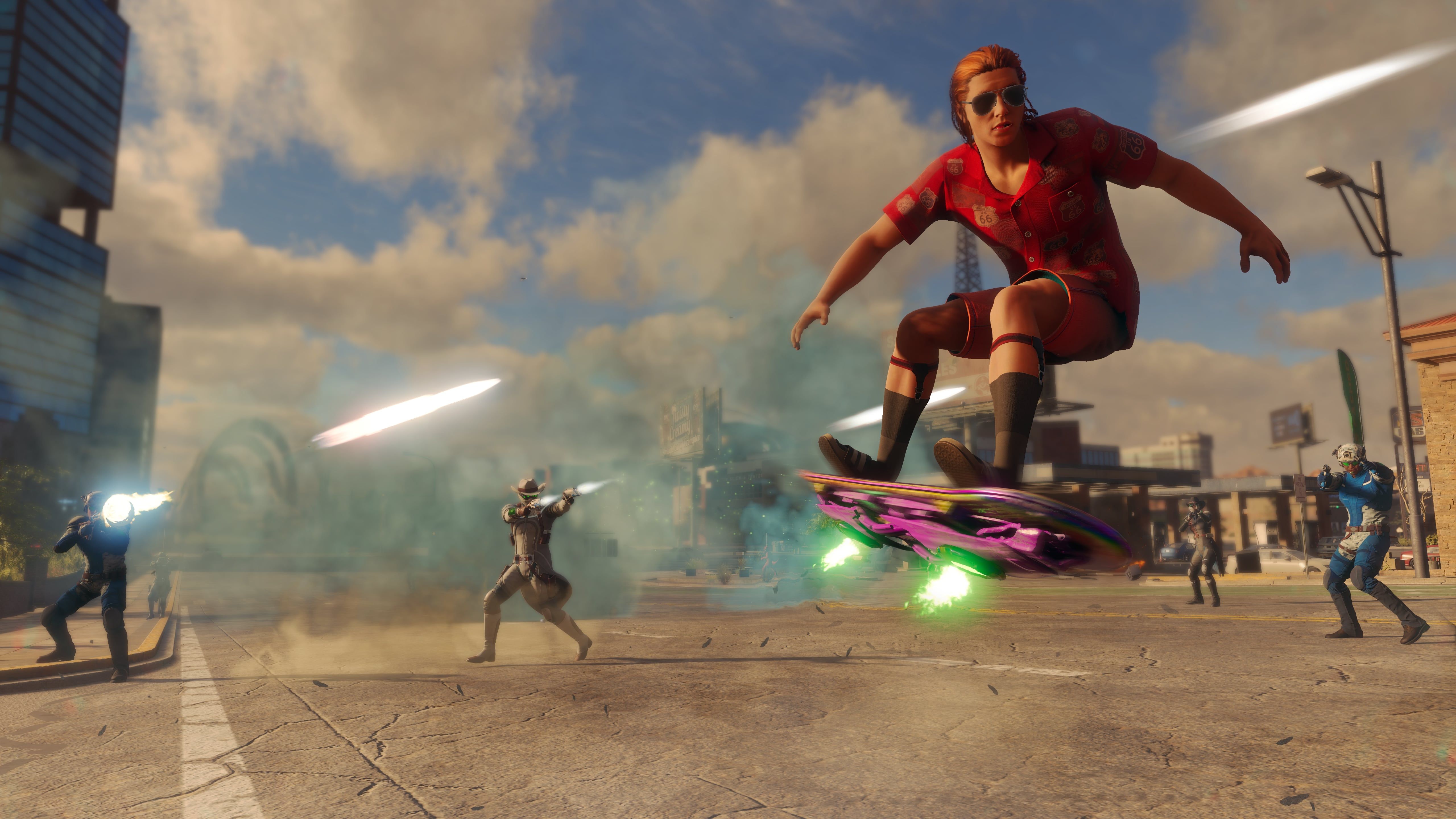 But it looks and seems to play like a game from six or seven years ago, with QTEs, wonky cutscene-to-gameplay transitions, and less sophisticated graphics than gamers have come to accept. Personally, I'm not sure I mind at all – did you not read the intro about all of the huge delays this year? Major delays have become a regular part of gaming, and part of the reason is how unsustainable our current development cycles are as we engineer made up space races to capture the most realistic pupil dilation in our games. I don't think many people really care about that once their thumbs are on the joystick. Saints Row looks set to put that theory to the test, and I hope the fact it doesn't look like people had to sleep under their desk six days a week for eight months isn't counted against them.

In a nutshell, Saints Row is just Saints Row: The Third all over again. In terms of how the game looks, plays, and is structured, it's a sequel that builds on The Third. This is a genius idea – whenever people think of the classic SR tropes, it's things that The Third either invented or perfected. The first two were a little too self-serious, even as you sprayed buildings with trucks full of human effluence, and the fourth overcooked its formula by adding superpowers. It was enjoyable in the moment, but The Third is the obvious building block, and I'm glad the devs seem to have understood that – now I just hope the playerbase can go with it.

This is not just SR3 again though, but more like SR3-2. There's a wider variety of guns with greater customisation, and a range of RPG skill tree-style perks that can be added and removed at will in order to best prepare you for the confines of any given mission. It seems a good balance between limiting your power and letting you always be in control of how you want to play. Since the whole game is playable in co-op, you can even work with a friend to cover the perk spread. 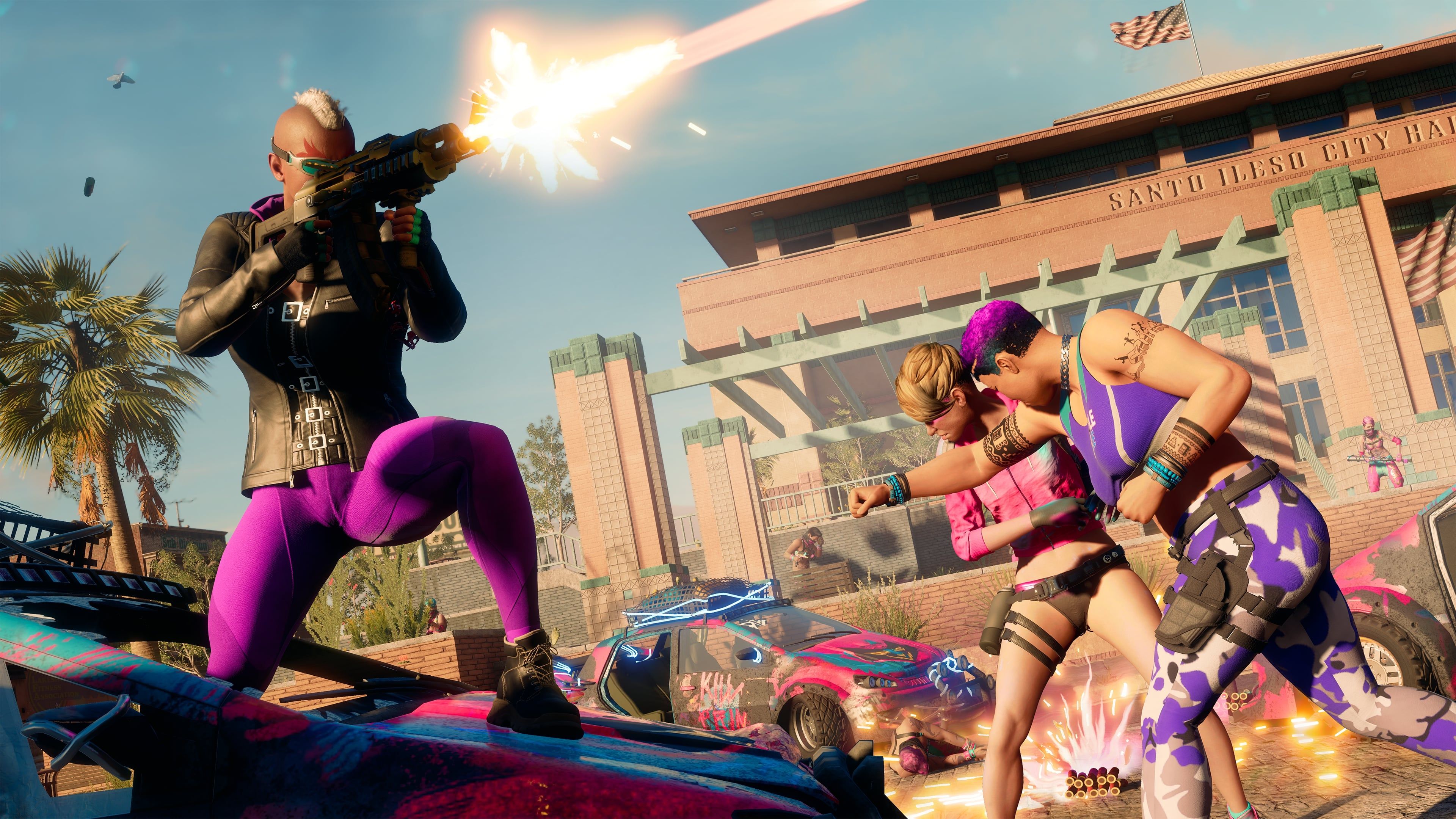 The only thing I saw that particularly worried me was the conversation with the devs themselves. We were told, repeatedly, that there was to be an emotional connection to all of our homies, that this was to be a story with heart. I just didn't feel that, nor do I think the game needs it. The mission we saw the most of involved one of our homies being strapped to (an analogy for) the Hollywood sign, about to be blown up if we don't get there. It's too cartoonish to have any heart to it, too full of quips and beatdowns to feel meaningful. It's not soaked in anger like John Wick, not tinged with sadness and desperation like 16 Blocks. It's more like Deadpool. That's fine – good, even. I have no problem with Saints Row being like Deadpool, I think 3 & 4 are vastly more enjoyable than the first two offerings, but the fact Volition kept repeating the idea that this version was meant to have some deep emotional resonance has me worried there will be a tonal clash further down the line.

My hope is that it’s just a case of telling us what we wanted to hear, or what they thought we wanted to hear, because as we've seen, marketing is not Saints Row's strong suit right now. I can roll with the graphics being a little dated, and the QTE events and other gameplay conventions all being borrowed from elsewhere, but I'm not sure I can take it if this game tries to make me feel something and then gets it all wrong. I do want to highlight that despite most of the game relying on existing (and arguably even outdated) gameplay tropes, the customisation is fantastic, but I'll be writing an entirely separate piece to dive deep into that. 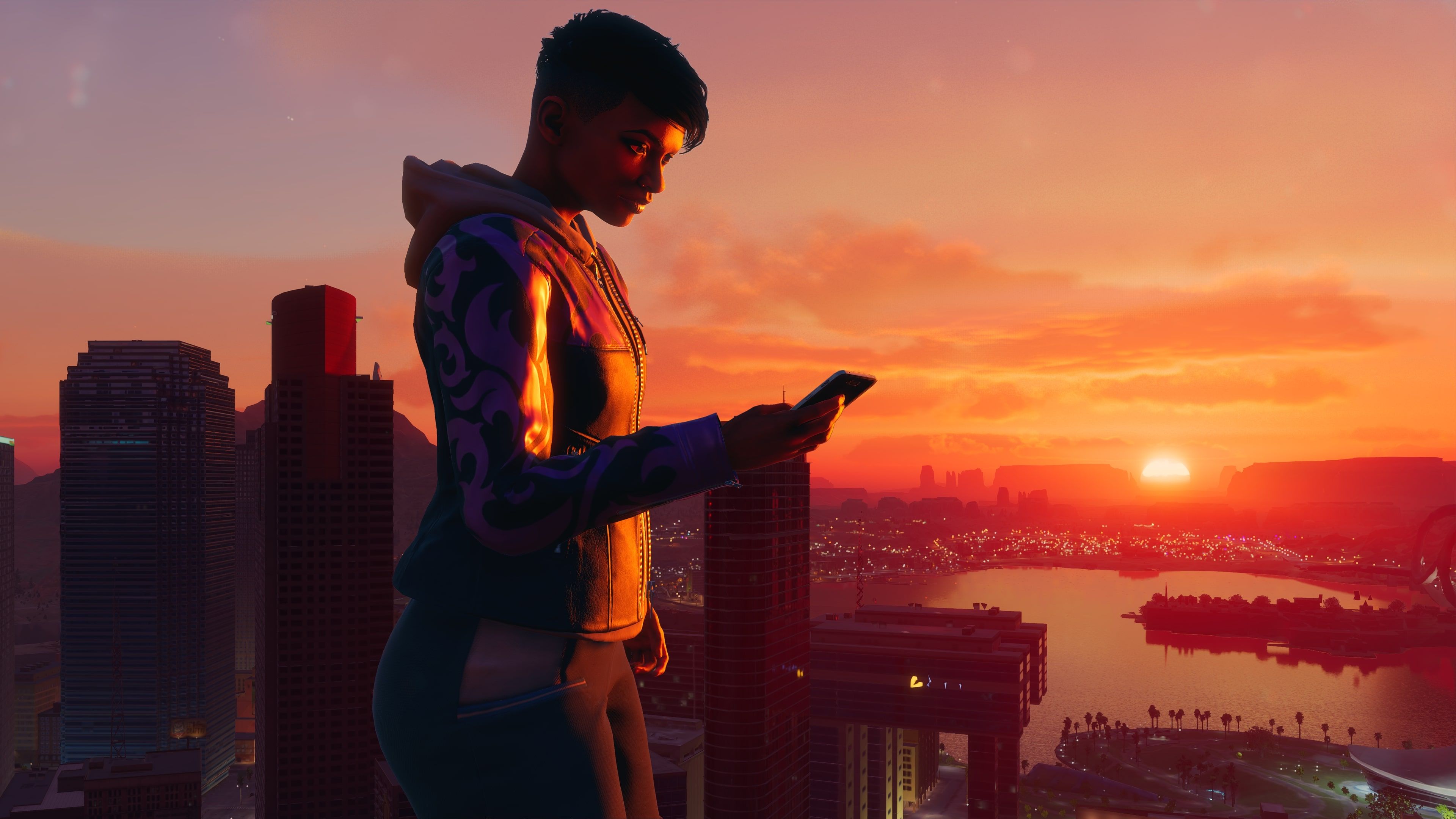 Overall, Saints Row looks like a great Saints Row game, albeit one that might have been more welcome in 2017 where its graphics would be more at home. The doubters who call it 'woke', as if that is some great sin in any case, probably aren't well versed enough in critical thinking to evaluate a game beyond the surface level looks, less shiny than God of War Ragnarok will be. Ironically, those empty-headed fools would probably have a blast with Saints Row, as it looks to be the perfect game to turn your brain off with. Shame those players flicked the switch a little too soon.