Home » News » Scott Pilgrim Vs. The World: The Game: How To Beat The Twins

Two heads are often better than one, and that’s definitely the case when you’re dealing with several of Ramona’s evil ex-boyfriends. In World 5, Scott Pilgrim has to take down not one but two pompous baddies at once. When two Evil Exes crash a Halloween party, Scott once again prepares for battle.

These exes are the twins, Kyle and Ken Katayanagi. As genius inventors and musicians, the pair plan to use all their skills to decimate Scott Pilgrim. Get ready for a legendary battle with the Twin Dragons of the League of Evil Exes. 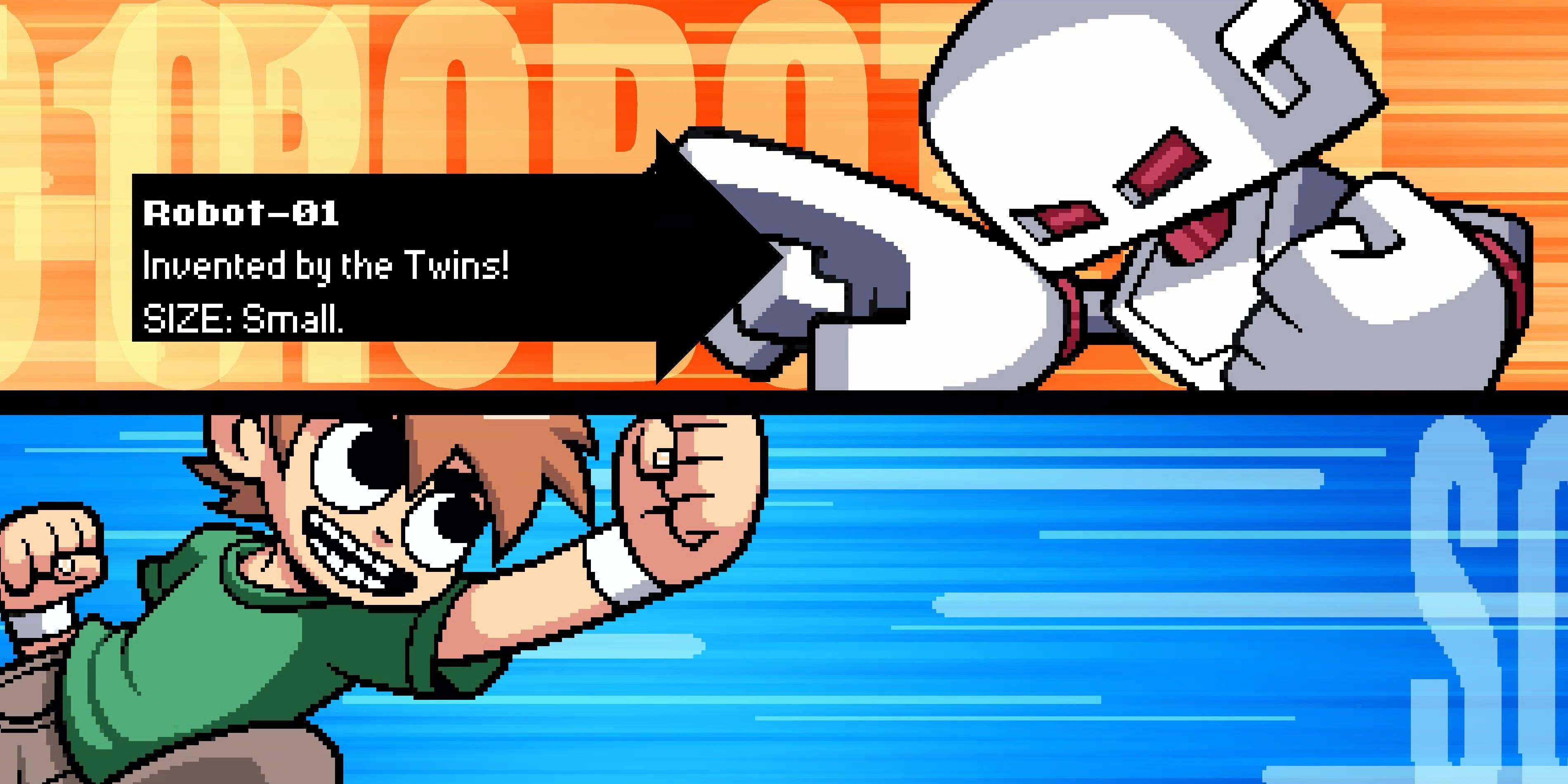 Right after the level begins, Scott will fight a few random enemies. After a brief encounter with some giant disco balls, Robot-01 will crash the party and confront Scott. This is an entirely new enemy, but he fights like most normal foes throughout the previous levels.

While Robot-01 does sport a bit more health than other opponents, this bot isn’t too hard to handle; keep in mind that he’s faster and more responsive than other adversaries. Once he’s beaten, proceed to the Fire Escape and get ready to buy some items. 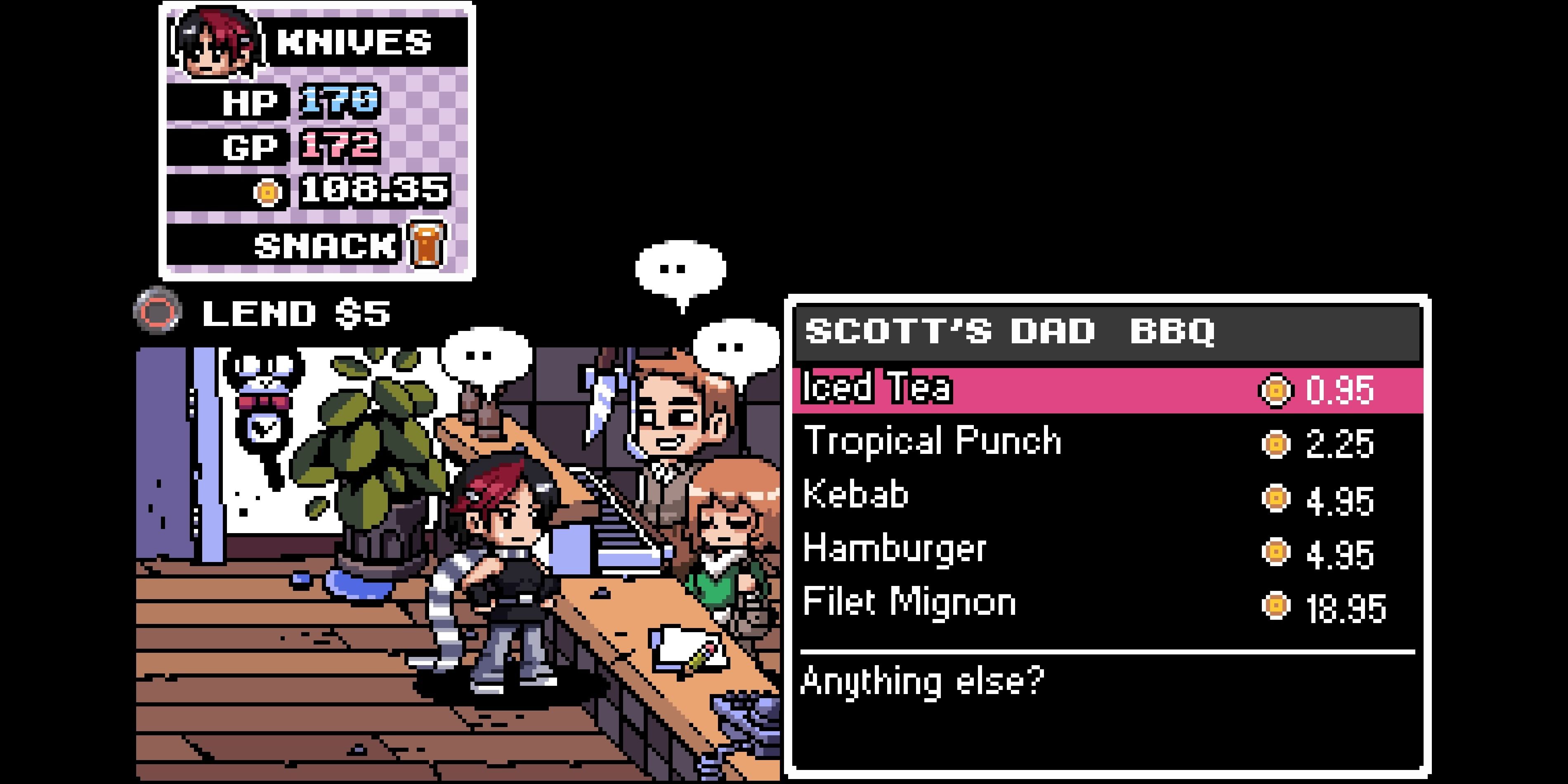 Before heading up the Fire Escape, search for a glass door along the wall outside. There is a secret shop here that Scott’s parents run. Replenish health and improve stats with these relatively cheap items:

Keep in mind that food can be stored in character inventory. These items could be invaluable for upcoming encounters. 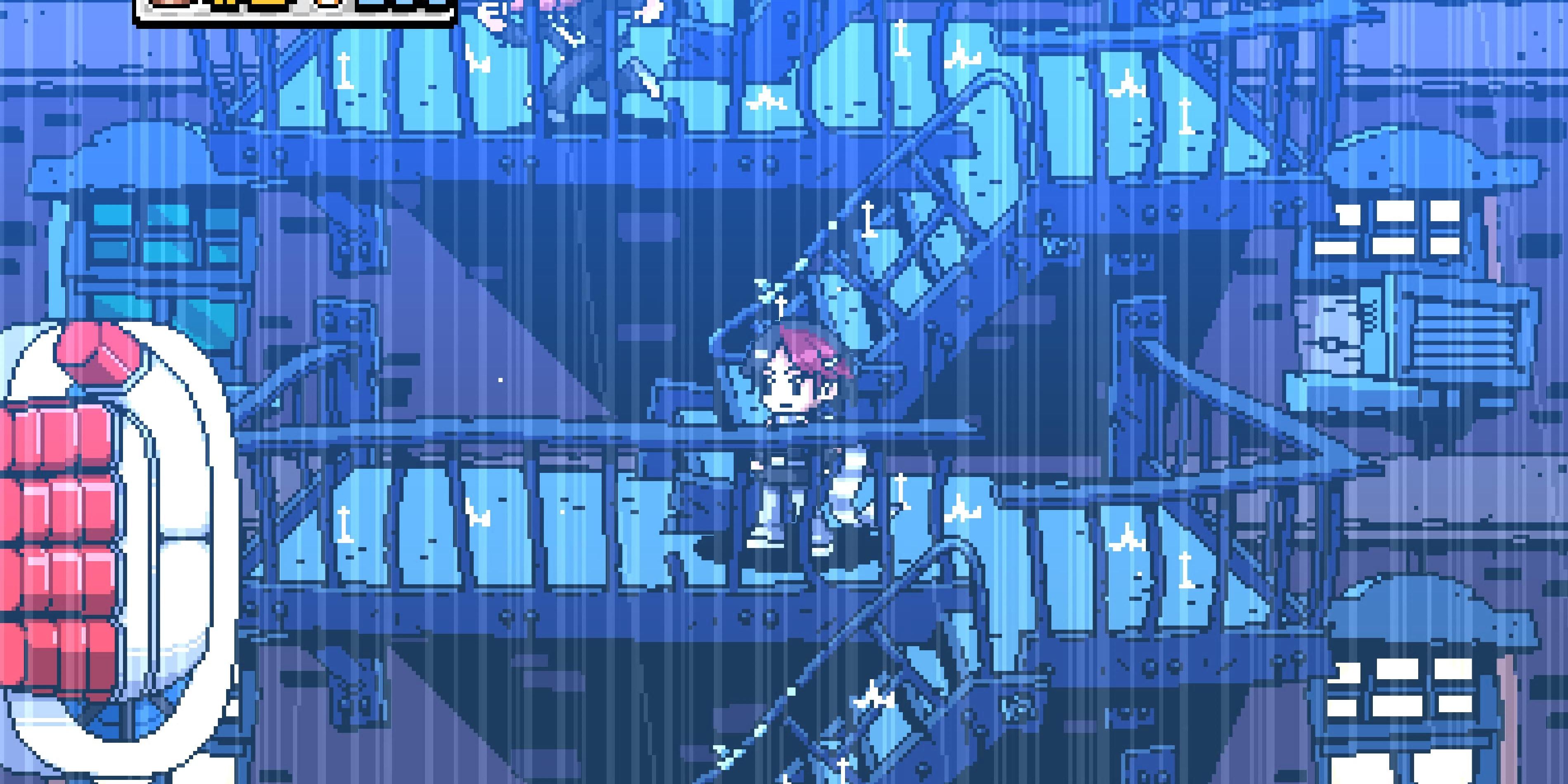 After getting some supplies, head over to the Fire Escape and get ready to run, as the twins have prepared a nasty surprise for Scott and his friends. This segment consists of:

As Scott and his party make their way up the staircase, they’ll see two Giant Robot Fists slowly destroy the Fire Escape. Ignore the enemies standing in the way, as there isn’t time to defeat them individually. Dash past them and let the fists deal with them. Take care not to fall, as doing so will inflict damage. Falling won’t kill Scott or his allies, though. They’ll be transported back to the top of the staircase when they fall. 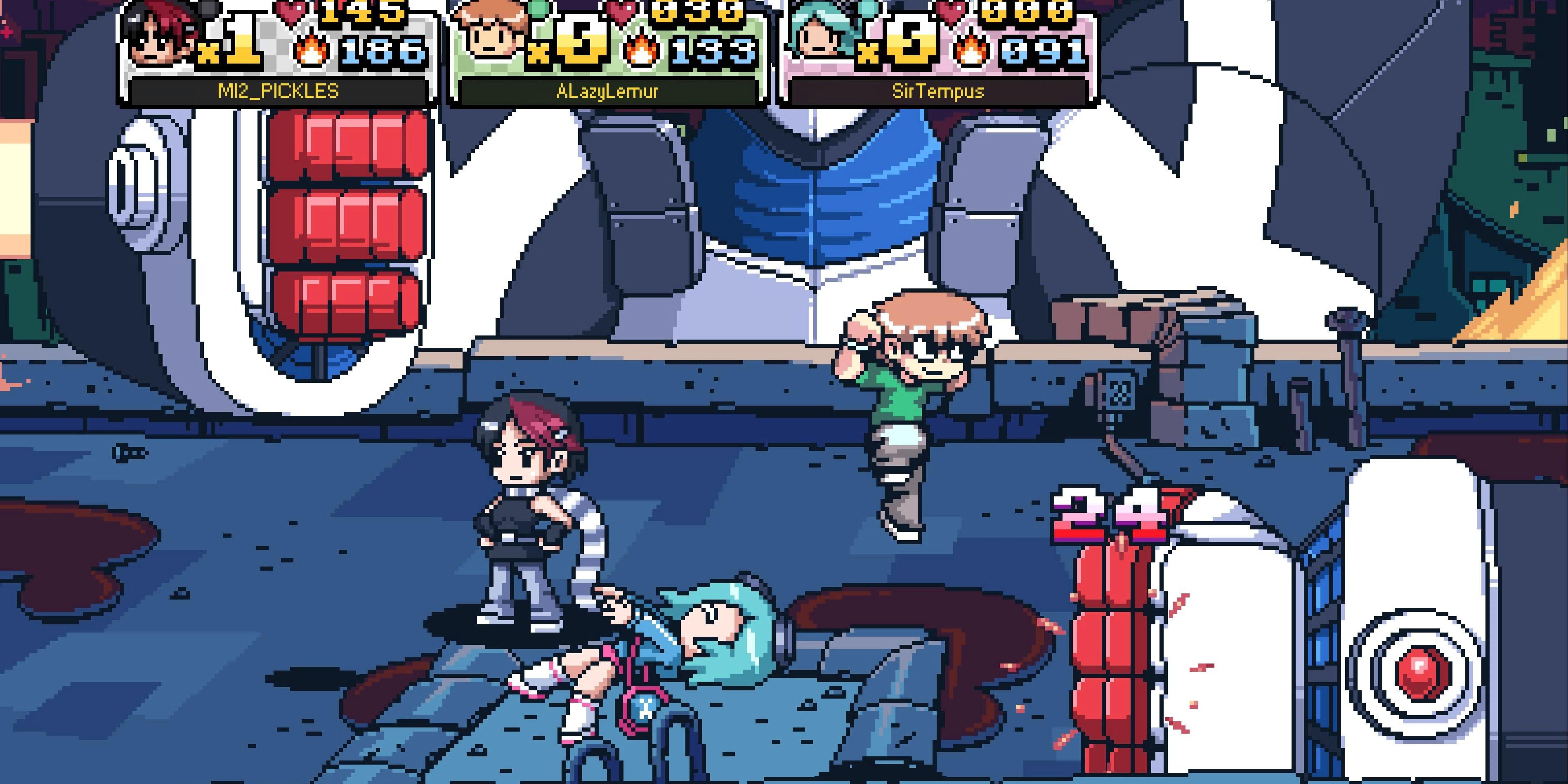 On the roof, the next sub-boss awaits the party. The Twins’ Fighting Robot offers a challenge far greater than that of Robot-01. Be ready for an entirely new set of moves and an enemy that dominates this terrain:

This Fighting Robot is adept at close range and long-range. Players will have to destroy the robot’s arms to incapacitate it. There are only several moves where the arms are vulnerable, those being Giant Fist Smash and Clutch. These two fists will come from the left and right sides of the screen. Both arms will have to be destroyed individually, so focus on one arm at a time.

When the bot’s fists first appear, they’ll slam the ground with the Giant Fist Smash. Be careful as this attack has Area of Effect damage, sending shockwaves out around the fist. Try to stay airborne when the twins use this move, as the ground is the only area impacted.

Attack these arms as they come close, be wary as the Clutch attack will grab and crush Scott, dealing damage over time. Mash buttons to break free from this attack.

When the Fighting Robot is out of reach, he’ll use his Rocket Salvo to rain missiles down on the roof. Avoid the targets that appear on the ground. This move is often used after the Giant Fist Smash, so be prepared.

The most dangerous attack that this sub-boss has is his Laser Beam. The eye of this bot will charge up, glowing blue before it fires a laser. This move covers a large area on the roof. Stick to the far left and right sides of the roof to avoid being hit. 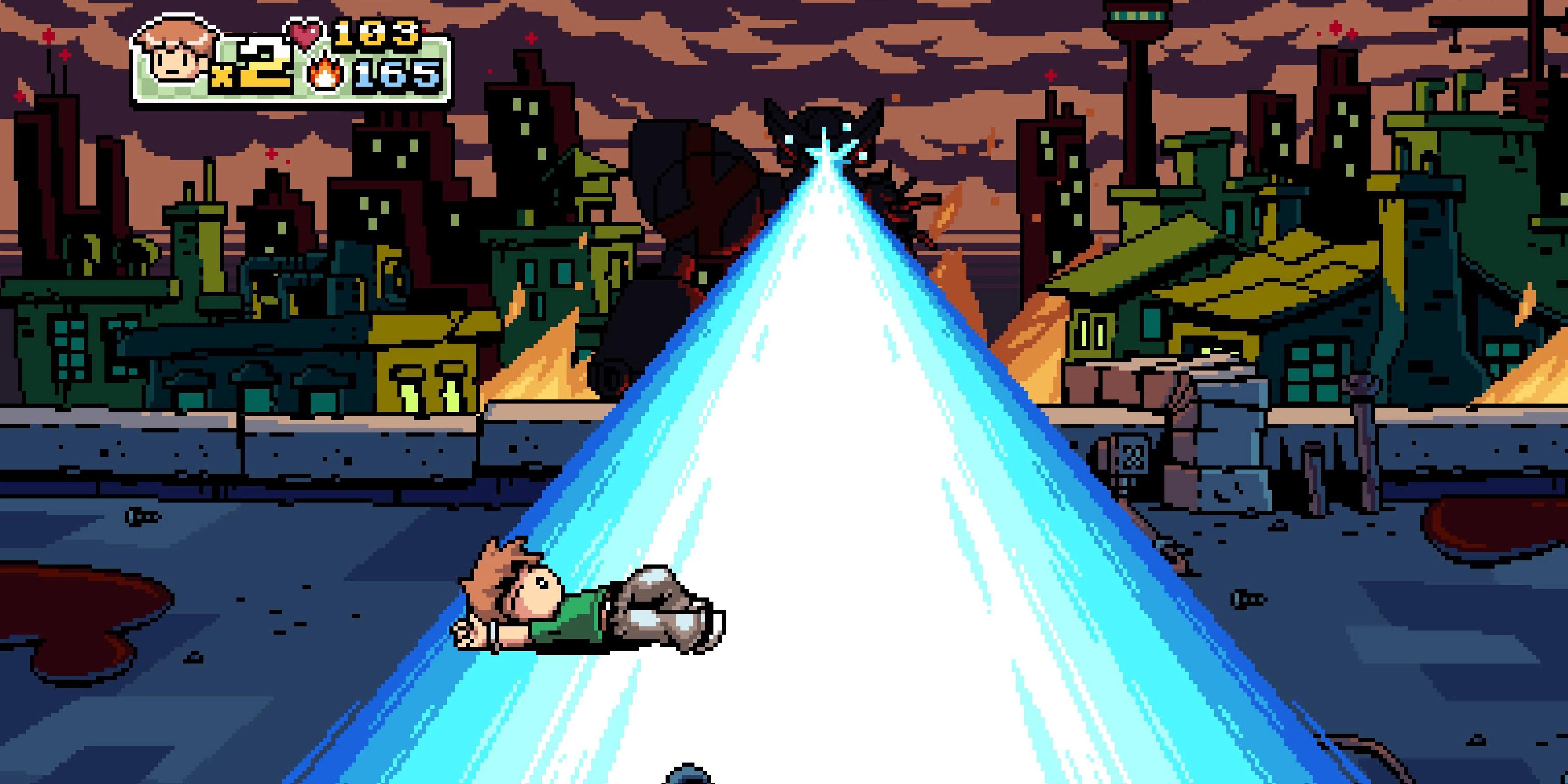 Use these strategies until both arms are destroyed to complete this phase and enter The Dragon’s Den. 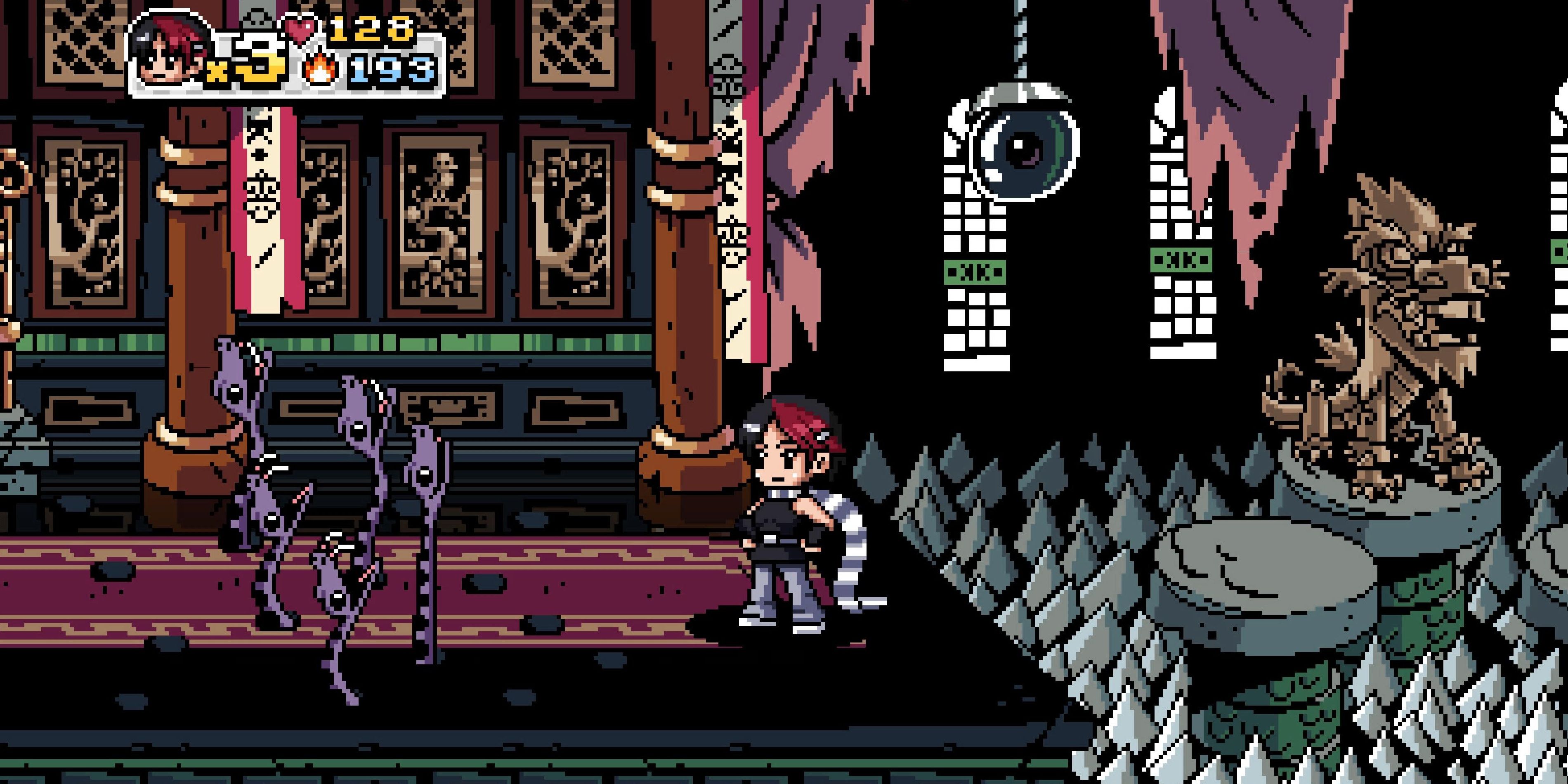 To reach the penultimate confrontation with Kyle and Ken Katayanagi, Scott and his friends will have to make their way through The Dragon’s Den. This mini-dungeon is laden with traps and enemies aiming to widdle health away before the boss fight. Look out for the following obstacles on the road to the Twins:

At the end of the path, there will be a statue with half of each twin. Punch them into place until they meet in the center. The door to the final standoff with the Twins will open up behind it.

Kyle and Ken Katayanagi: Phase One 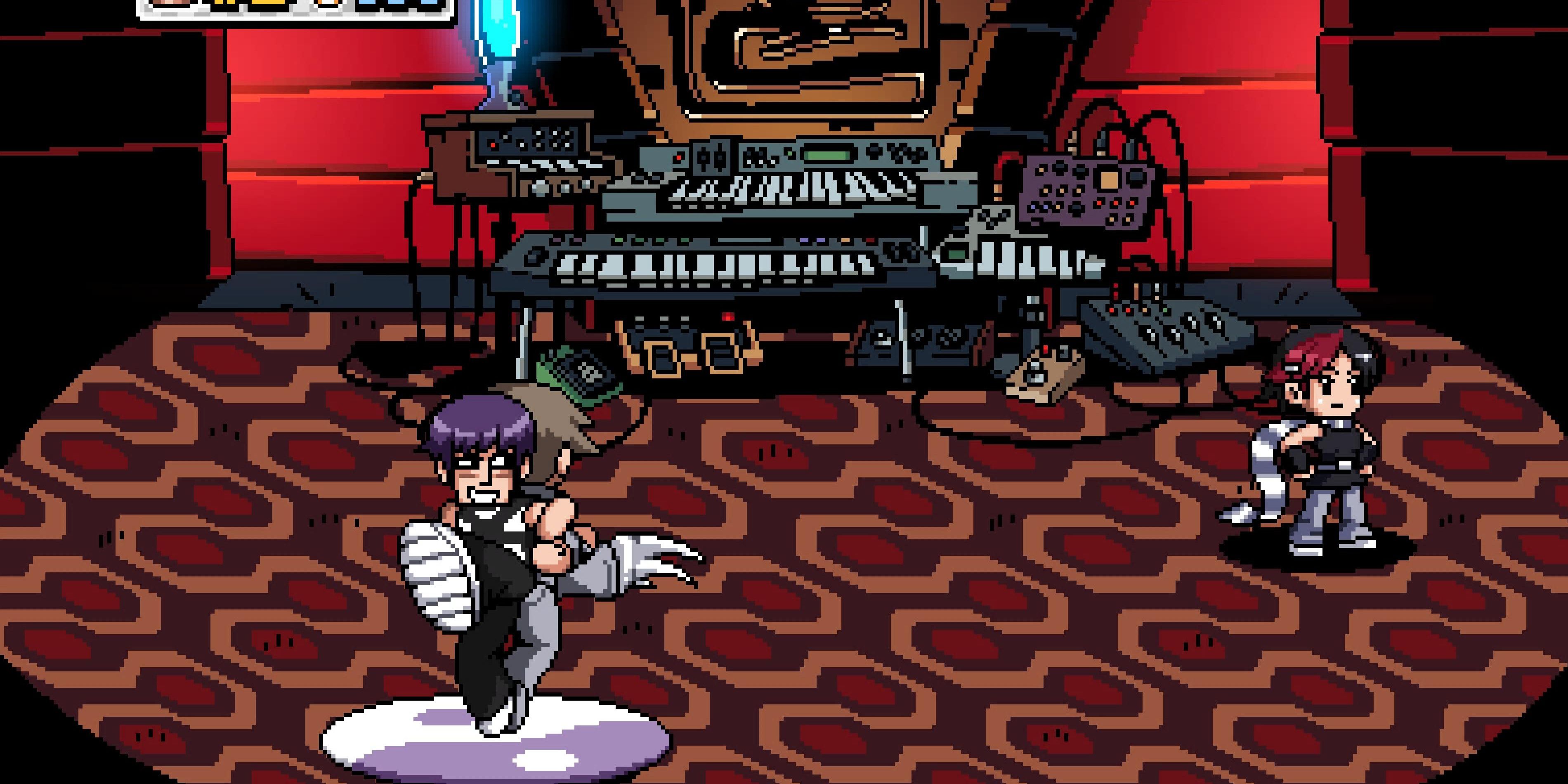 With their robots destroyed and the minions defeated, it’s finally time to take the twins on. Unlike the previous boss fights, this kerfuffle contains two individual bosses. Both Kyle and Ken can move independently, often working together to create some sinister combos, including the following:

Compared to the previous bosses, the move list of these two adversaries is minimal. Don’t underestimate them because of this, though. The two are capable of dealing out substantial damage in succession.

Look out for their Alternating Attacks; the two will take turns dealing damage to lock Scott in a combo. Keep them separated and widdle their health down. Like the boss who came before them, the pair has individual health pools and needs to be dealt with individually.

Be cautious when they are together, as they’ll execute their Twin Dragon Roundhouse Kick. This move will send players flying, stunning them in the process. Keep the pressure on until they’re both glowing yellow. This will initiate the final phase. 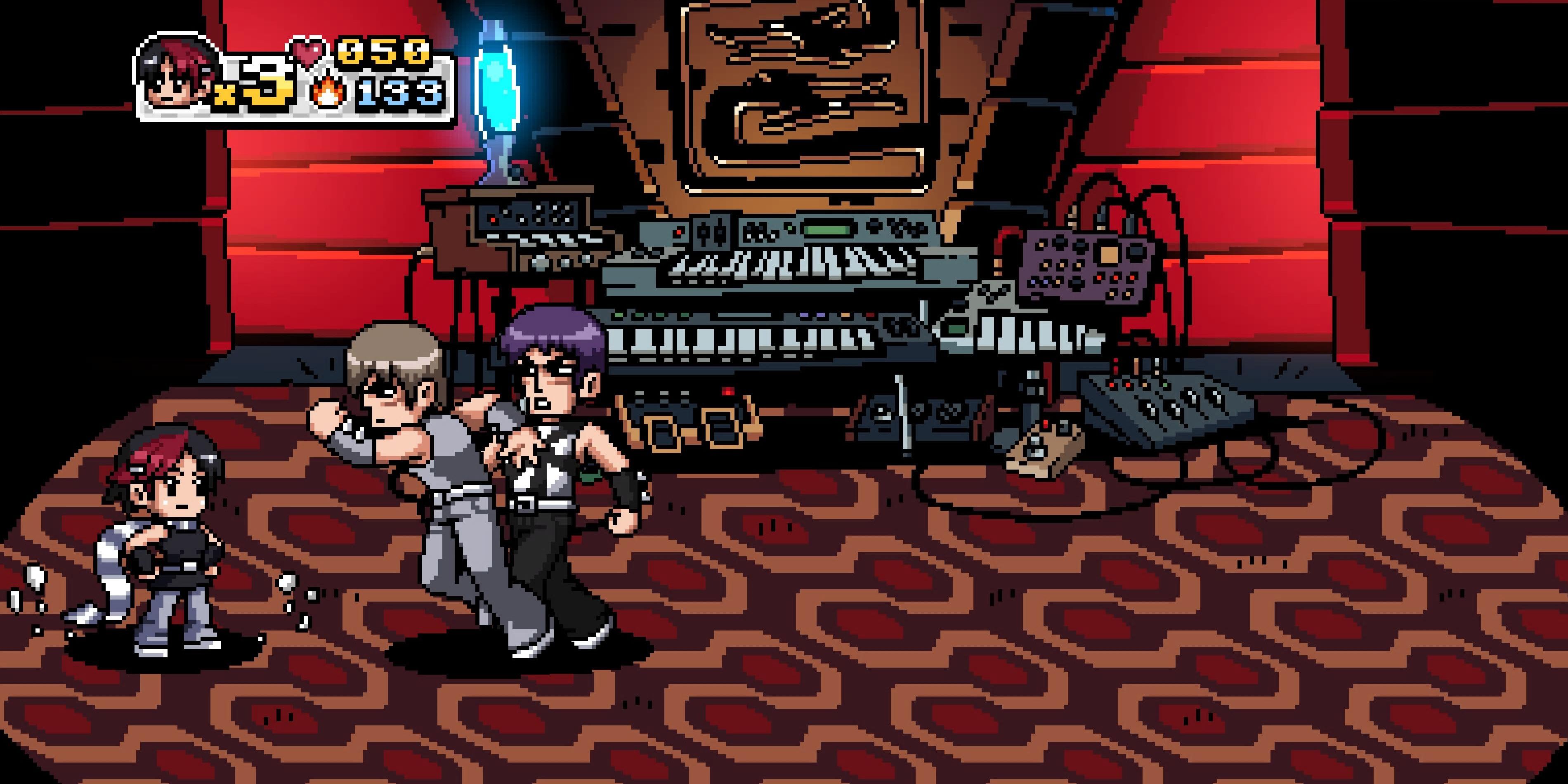 In phase two, there are few changes, but the twins will be more aggressive. This, and failing to KO them simultaneously, will allow one to revive the other. Keep the pressure on and prevent them from aiding each other when they’re down. Congrats! That’s exes five and six defeated!

Next: 10 Tips For Beginners In Scott Pilgrim Vs. The World: The Game 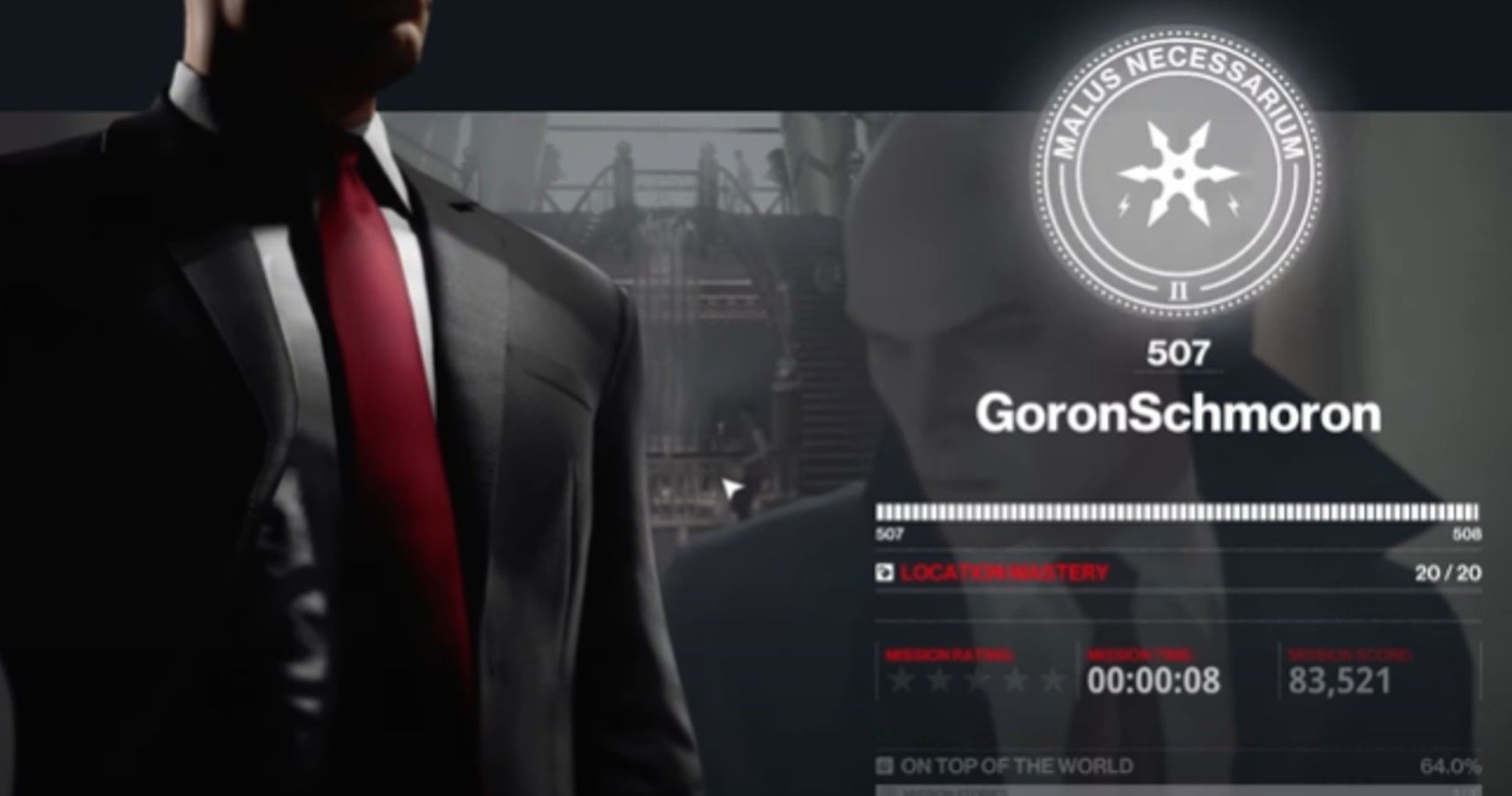