I love a good dungeon crawl. Plunging the depths of an ancient, forbidden place, unearthing its history, battling the evil denizens lurking within, and plundering their treasure. I also love that feeling of emerging back into the daylight, battered and bruised, levelled up, with a sack full of loot (and junk) to sell. You head to a cosy tavern in a nearby town, rest, regroup, and dump your spoils on the counter of some lucky merchant. It's an important ritual in any good medieval fantasy RPG, including Skyrim.

There are just under 200 dungeons in Skyrim, but not all of them are good. For every memorable one there are a dozen repetitive Draugr crypts, Dwarven ruins, or Falmer hives to slog through, with no interesting stories to tell. The level-based randomised loot also means that they can feel anticlimactic too, especially early in the game. You defeat a powerful boss, reveal a comically oversized treasure chest, and excitedly open it, only to find an iron sword with a weak enchantment and 56 gold.

But there's one dungeon in Skyrim that stands above the rest. If you travel to the sleepy town of Ivarstead, nestled at the foot of the Throat of the World, and head to the Vilemyr Inn, you'll meet a fellow named Wilhelm. He's the proprietor of this fine establishment, but his business is suffering. Spirits have been sighted at the entrance of a nearby tomb, and it's making his patrons nervous. "Who'd want to rent a room near a haunted barrow?" he laments, triggering a quest called Lifting the Shroud. 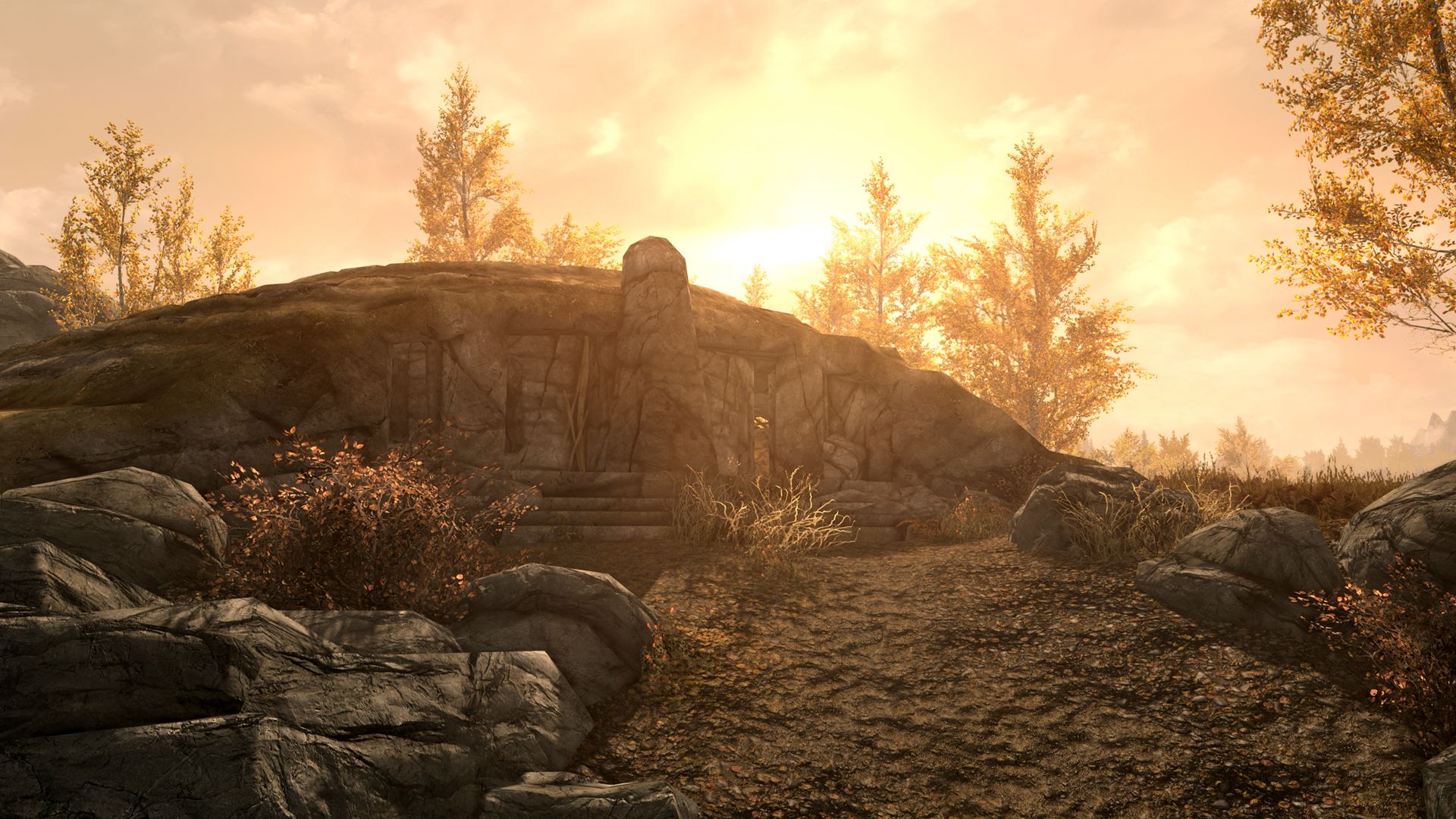 Straight away, you're invested. You want to help Wilhelm, because he seems like a decent guy, but you're also intrigued by what's inside the barrow. It's a great setup for a horror story too. An ancient tomb at the edge of town filled with restless ghosts. Skyrim often struggles to grab you with a compelling hook, especially where its dungeons are concerned, but this story immediately sinks its claws into you. It's the kind of quest that makes you immediately abandon whatever you're doing to pursue.

Not long after entering the evocatively named Shroud Hearth Barrow, you encounter one of these spirits. A spectral figure glowing an eerie shade of blue, watching you from the other side of a barred door, warns you to stay away. Usually these tombs are filled with Draugur, but the stone corridors of this barrow are eerily quiet. You still have to be on your guard, though: there are traps everywhere. You can barely walk a metre without stepping on a pressure plate and triggering some deadly deterrent.

It's clear someone, or something, wants to keep adventurers and inquisitive Ivsarstead locals away from this place. You make your way through a labyrinth of tunnels, dodging flame and dart traps, until you find a small antechamber that someone appears to have been living in. A dark elf wizard, Wyndelius Gatharian, suddenly attacks you. He's glowing blue, like the spirit you saw earlier, and zaps you with blasts of lightning magic. Luckily, being a squishy mage, he's pretty easy to defeat. 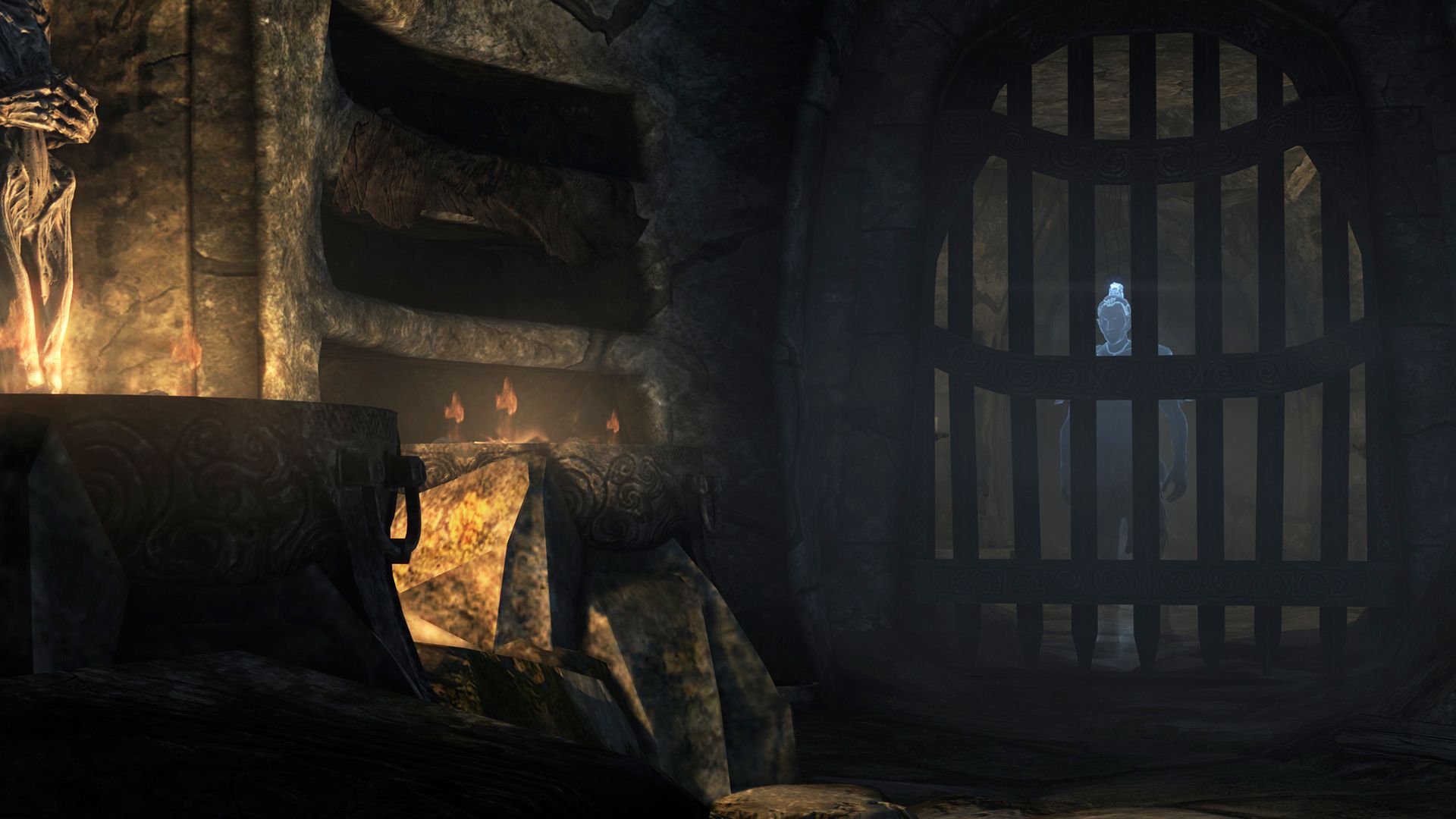 Then the truth is revealed. You find a journal revealing that Gatharian was in fact a tomb robber looking for a valuable artifact, the sapphire claw, in the barrow. To search for it uninterrupted, he used a potion called Philter of the Phantom (a bottle of which you can find nearby) to take on a ghost-like appearance and scare the locals away. But the potion drove him to madness, making him believe he was really the ghostly guardian of the barrow, and that's the tragic state you find him in.

A lot of Skyrim's dungeons are pretty straightforward. You venture inside, kill any monsters, bandits, or animals you find, maybe locate an item, then return to the quest giver to collect your gold. That's what makes Shroud Hearth Barrow so fun and unique. It's a well-paced horror story with a Twilight Zone twist. But there's also another layer to it. When he learns the truth about Gatharian, Wilhelm the innkeeper reveals that he had the sapphire claw all along, and gives you it as a reward.

With it you can access the deeper levels of the barrow and enjoy some more familiar dungeon crawling. There are secret rooms, puzzles, treasure chests, and plenty of Draugr to slay, and in terms of layout, this is one of the more interesting dungeons in the game. You return to Ivarstead loaded with gold, weapons, armour, and assorted junk to sell, and also have the satisfaction of having been told a good story. Shroud Hearth Barrow is the whole package, and I wish Skyrim had more dungeons like it.