Indie video game company Simutronics Corp. recently announced its newest incoming video game Galahad 3093, a mech-based sci-fi arena shooter with a healthy dose of Arthurian legend outfitting its theme. The game is set to launch for PC via Steam and the Epic store, with the release date as yet unannounced.

Galahad 3093’s announcement came via the first alpha Gameplay Reveal Trailer on the game’s YouTube channel, where previously only two teaser trailers were published. The gameplay shows a good mix of mech varieties blasting each other in team arena combat, and in some interesting and not-unfamiliar-looking indoor and outdoor settings. In fact, Galahad seems to have a familiar vibe going overall, as if it has keenly mixed Starsiege: Tribes with Hawken, and that’s not a bad thing at all.

In-game, you’ll be piloting a Lance, “a high-mobility heavy weapons platform” that has become the de facto mech weapon in the year 3093. Each Lance can be configured and outfitted with numerous upgrade modules, allowing you to kit up for almost any combat situation. But even the base standard models are fast and highly maneuverable, allowing you to skid quickly across terrain, or use jump jets to get over and across with style.

Piloting your Lance will be one of several Knights, who have taken for themselves names based on some of the famed Arthurian legends of the Knights of the Round Table. Each Knight has one active and one passive special ability that will affect the capabilities of your Lance:

The greatest part of customization comes in trying out each Knight in each available Lance, and outfitting each Lance with your choice of weapons and other gear such as mines, drones, shield walls, and more. This flexibility allows you to try out many different combat variations to see which ones work best for your playstyle, or can just be used to keep your opponents guessing as to what style of warrior you’ll be from match to match. 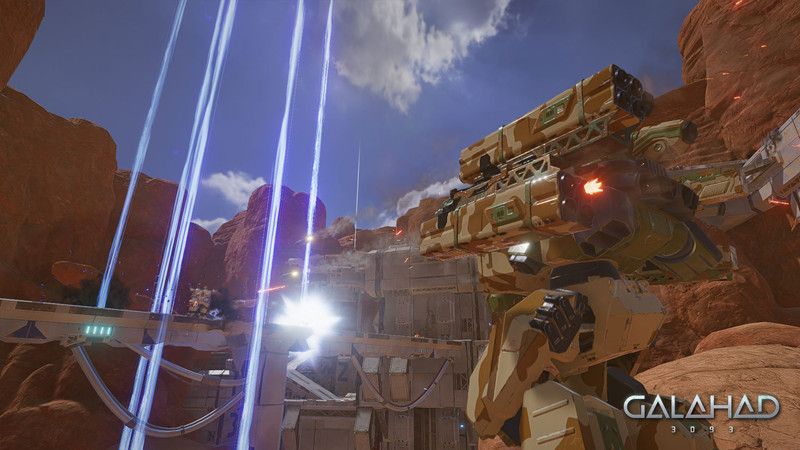