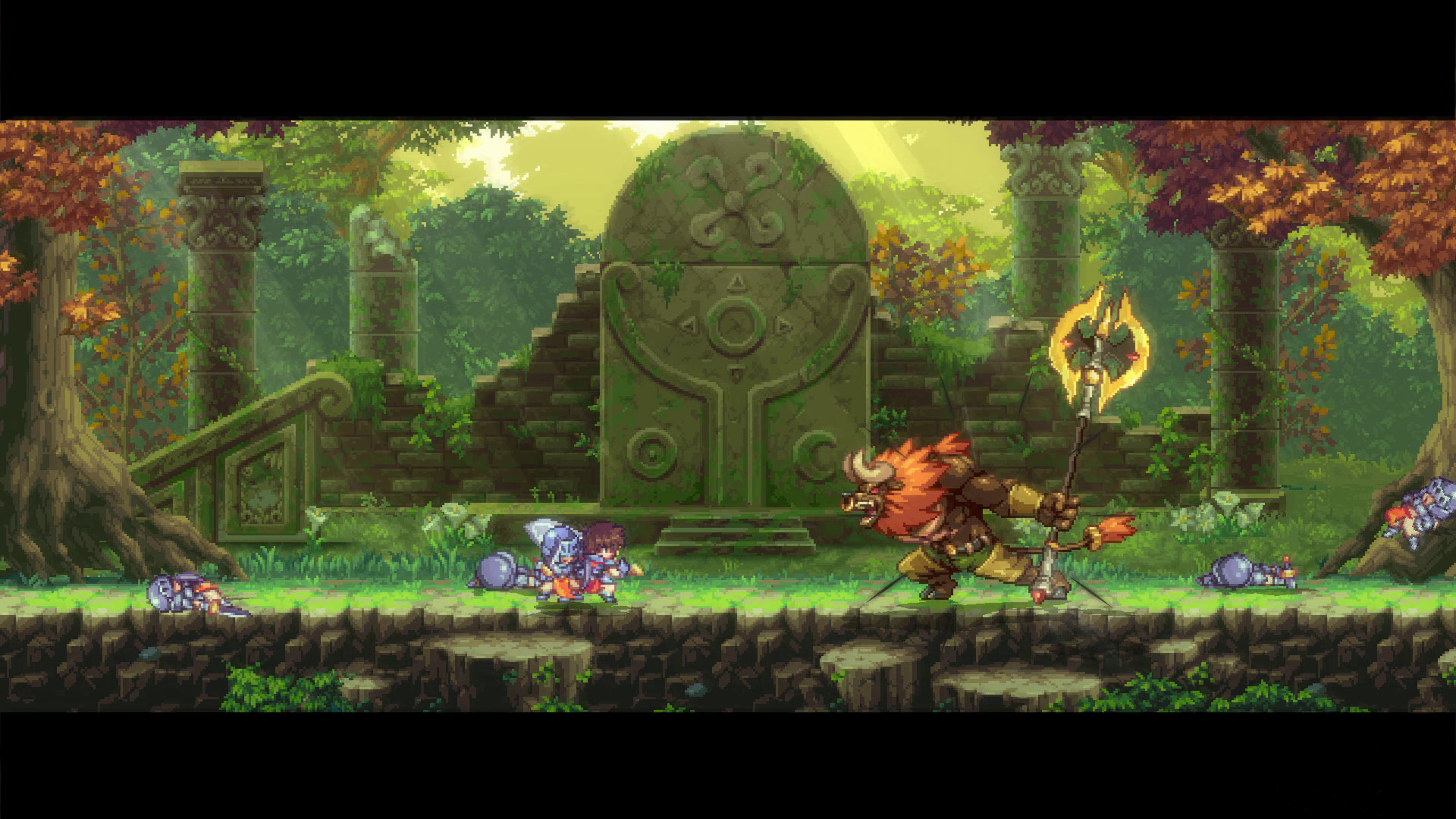 Metroidvania and Soulslike combat combine in this indie action role-player with a touch of 16-bit magic.

There probably isn’t a genre more vaguely defined than Soulslike. There’re some obvious ingredients – such as ‘bonfire’ save points which respawn enemies, highly difficult boss fights, and stamina-orientated combat – but the influence of Dark Souls has become so prevalent in so many areas, from level design to storytelling, it feels like a term barrelling towards redundancy.

By sticking it in the title, Souldiers might be perceived as a pixelated reskin of FromSoftware’s formula. In reality though, along with having a bigger hotpot of influences, the name is a smart sell for the game’s surprisingly meaty story.

In Souldiers, after a stylish opening cut scene, which sets the anime fantasy tone, you’re thrown into a kingdom on the brink of war. After your battalion receives orders to switch positions thanks to a last-minute tactics change, you’re engulfed by an earthquake and greeted by a Valkyrie. To save your lives, she opens a gateway to a land between life and death, where a Guardian promises to restore your group of soldiers to the world with even more power than before.

You play as one of the ‘Souldiers’ who follows the leader, General Brigard, through the gateway to Terragaya, where you quickly encounter the monsters which annihilated your squadmates. At first, it might just seem like contextual flavour to springboard the action, but Souldiers leans on its narrative more than you might expect – in a style which harkens back to the Game Boy Advance or original PlayStation era.

While the Soulslike elements are clear within the first 10 minutes – including a run-in with a difficult boss designed to obliterate you – Souldiers is balanced with classic role-playing sensibilities and Metroidvania design. You’re thrown into a dungeon at the outset, acquiring items like bombs to smash open pathways, solving minor puzzles, and navigating a labyrinth map in pursuit of the boss. It’s an experience which feels instantly familiar, lifted by its surprising mechanical complexity and throwback 16-bit presentation.

A key hook of Souldiers is the different classes which, while not exactly novel, aren’t so commonly applied to Metroidvanias. At the start, you choose between Archer, Caster, or Scout, each with unique stats and abilities. Scouts are skewed towards melee combat; Archers are, as you’d expect, long-range warriors with well-rounded attributes; while Casters have powerful homing magic and low HP. The differences stretch beyond the initial stats too, with individual skill trees hiding unique powers and buffs, like shield bashes or exploding decoys.

The classes feel distinct in action too. Certain enemies, like a wall of spiders, can be steamrolled when you have homing magic spells at your disposal. As the Scout, it’s a far more dangerous proposition, where the best option is often running away, rather than employing the jumping slash routine which leaves you exposed to projectile web attacks.

While running away is a viable option, Souldiers encourages taking on its nasties. Enemies drop cash, health, ammo shards for secondary weapons, and grants you experience points for levelling up. Crucially, combat is fun even without the incentives. Movement is snappy, tactile, and there’s a vast range of moves to engage with – including light and strong attacks, special skills, blocks, dodges, and secondary items like bouncing chemical grenades and hammers.

There’s plenty of distinct enemy types too which, like Dark Souls, can quickly sink your survival odds if you don’t memorise and exploit their attack patterns. An aggressive spin on the Hammer Bros. enemy from Super Mario, for example, will likely leave you begging for the Mushroom Kingdom.

As the debut game from Spanish developer Retro Forge Studios, it’s surprising how dense and well executed Souldiers is. Aside from the gameplay, the 16-bit presentation is rich with detail and flourishes, like spiders crawling over the screen as you ride a cave elevator, or a desert backdrop littered with dilapidated ruins.

After several hours, you’ll come to a bustling town which acts as a hub for weapon upgrades, but it’s full of individually stylised characters which makes the world feel far more vivid and alive than most 2D side-scrollers. Every corner of the screen feels purposeful and pored over, making exploration into new areas a constant delight.

If anything, there’s too much to contend with at times, when it comes to the combat. Souldiers is demanding, even on the lowest difficulty, and in stressful fights it can feel like you’re wrestling with the controls to access health potions, throw items or swap out outfits on the fly for elemental damage buffs. It’s a problem shared by FromSoftware titles, but here it’s heightened by the 2D perspective where there’s less room to manoeuvre and more environmental hazards to navigate.

In the Switch version, we also encountered some noticeable performance issues. There’s slowdown in busy areas, while loading screens and saving takes far longer in comparison to the PC version. The developers have said they’re working on the problems in the console versions (some improvements were made to the stability in the review phase), so it might be resolved in a day one patch – but unless you’re on PC it’s perhaps worth waiting until they’re fixed.

Souldiers might be short on new ideas, and over encumbered with mechanics, but it’s still an impressive blend of Soulslike, Metroidvania, and role-playing game. There’s obvious affection for the various influences and if you’re after a challenging 2D side-scroller, with both modern and retro flourishes, Souldiers is a call to arms that you shouldn’t pass up.

In Short: A well executed and impressively detailed mix of Metroidvania exploration, Soulslike combat, and role-playing style customisation that’s marred only by its demanding controls.

Cons: Even with button mapping customisation, the sheer amount of moves is overwhelming. A familiar blend of ideas, with not much new. Performance issues on consoles.

Cure your quarantine blues in no time with this meditation app