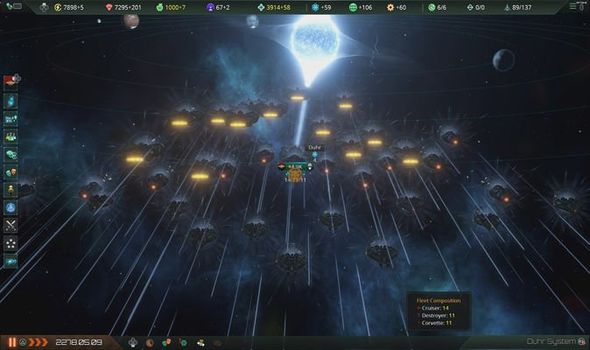 Anyone who has ever wanted to play grand strategy games in the past has usually needed to play on PC to get a chance at trying out the best stuff.

Luckily for those who game on other platforms, things are slowly changing, with more traditional PC titles getting the port treatment.

But this makes the quality of the port very important, especially when you consider how most PC titles have controls customised around a keyboard and mouse.

Right now, we are seeing more pioneering studios looking to make the leap to consoles, even with the long-held belief that people don’t play massive RTS titles on their TVs.

And this is where Stellaris Console Edition comes in, the latest mega PC port that looks to bring something different to the PS4 and Xbox One.

And based on our current time sync, we wouldn’t bet against it being your next console gaming fixture too.

For those who may have never heard of Stellaris, or Paradox Interactive, it’s a 4X grand strategy game that offers gamers the chance to build their very own space empire.

This means exploring the galaxy, dealing with alien civilisations and making sure you have enough firepower to defend your fledgeling people. This isn’t something that is readily available on consoles, making this Stellaris console port important.

And for the most part, Stellaris achieves everything it sets out to do; making it possible to enjoy such a massive experience on your TV.

One of Paradox’s main challenges was moving the Stellaris interface to a controller set up, while also making it possible to track through the layers of data with as much ease as possible.

And there is a lot to keep track of when you take on a game like Stellaris.

When you start the game, your first challenge will be picking a civilization to lead and then sculpting them to certain ideals.

You can also make your own, although I would suggest trying out one of the presets before embarking on that kind of quest.

But the great thing is that you have the option to customise the stuff you want, if you want to do that, providing a great layer of satisfaction.

Do you want to lead a group who wants to dominate the galaxy through war and aggressive expansionism? There’s a Civ for that.

Personally, I find it hard to pass up the chance at leading some smart, sassy-looking Fungoids to the top of the galactic food-chain, but that’s just my own preference.

The important thing to note is that everyone who wants to start playing should be able to find a fit for their own style of gameplay.

And by now you should have learnt that Stellaris is going to be a massive time sink and an enjoyable one at that.

If you’re new to all this then Stellaris will run the risk of bombarding you with information and questions that you might not know the answers to.

But my advice would be just to start a game and go through it with your eyes open and pick up the skills you need with your first playthroughs. 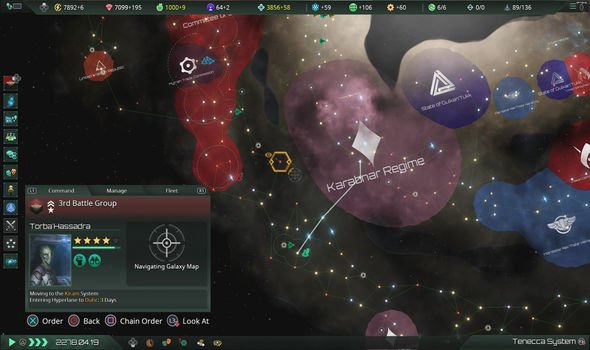 I found myself learning a lot about what it takes to be successful in Stellaris over the first ten hours of gameplay, before being entirely outplayed by another civilisation.

This is down to my own terrible skills at the game, but it also set me up for some major space drama that felt rewarding.

One of the first things you may be drawn to is the big battles you can take part in, as they can prove exciting and devastating.

But that’s just a small part of the Stellaris, which thrives on its many layers to make it an enjoyable, albeit, time-consuming experience.

The start of Stellaris begins with a tutorial that helps you learn the basics and its safe to say that you will keep learning new skills over the hours you play through it.

Much of the early game boils down to managing your resources and trying to make your Civilization thrive away from its home solar system.

The tutorial is handy, but the game’s mechanics are so vast that you probably won’t pick up everything in your first run-through.

This might sound a little strange, but I found it quite easy to end my first game and start another, based on the knowledge I had acquired.

I now know more about the kind of Civ I wanted to lead and how I hoped to build my power in the Galaxy.

That’s why you might want to leave making your own Empire until later.

As with any good empire game, you will find yourself exploring new research, expanding to new worlds and moving away from the micromanagement side of things.

This usually starts to happen when you found your first settlements and explore the regions around you.

Each Civilization has its own strengths and weaknesses, and mine could only handle a small group of settlements to govern. That meant creating new areas that were run by dedicated Governor, who also needed to be recruited and scrutinised.

You set your own goals for the region, and as ever, there are plenty of options to choose from.

This is one of the ways Stellaris starts to peel you away from the micromanagement side of things, while also being able to bend that region to your needs.

This comes in handy when you start rubbing up against other empires, who may not take kindly to your own culture and ways of doing things.

These empires could boast a powerful armada, causing you real problems, or they might be in awe of your advance tech.

Each playthrough will offer different combos, meaning you can’t be sure how things will turn out, even if you have chosen the options of how thing will work.

The fun of working out trade deals and scrapping over vital resources is some of the best parts of Stellaris. You will need admirals to lead your fleets, or scientists to give you an edge in an ongoing tech race.

And how the game looks helps you get into the narrative that you’re building in Stellaris. While things look a little dim when you’re hovering far out in the Solar System, zooming in gives you a much interesting perspective.

You can watch space stations being built, view your vast armies zoom past purple stars while blazing green engine fire. And then there are the satisfyingly detailed galaxy maps that fill up with rival bubbles that you’re itching to pop.

Getting everything right when it comes to defending your empire and making it one of the top dogs in the galaxy is nearly impossible. Some players may find it easy to outflank the game’s AI, but I would expect it would take some time before you find the exact formula to pull this off.

Your strategy will be affected by the traits you initially chose for your civilisation, but I always found that a solid defence was always key to building a good foundation. Giving yourself room to experiment during a playthrough is crucial, and you shouldn’t be worried about speeding things up so that you can learn things at a better pace.

And just when it feels like you have learnt enough to push your way towards one of the many victory conditions, you get hit by an endgame crisis.

This is an event that will change gameplay massively and could include having to band together against a new threat, or watch your own empire hit by something incredibly unhelpful.

This leads to a change that some players will love and others will hate, but it is something at least exploring once to find out. All of this is connected by a control scheme which lucky for strategy fans, works on console.

While the number of options available in the game will always take a while to get used to, Paradox has managed to make them as easy to access and follow as possible, The Outliner option tab can be accessed using the right D-Pad, giving you access to information on your ships and planets.

The left D-Pad opens up the information key to your government, shipbuilding, technology and situation log, which are all easily sign-posted.

This was a major hurdle that needed to be conquered and it feels like Paradox has done as good a job as possible. It can sometimes get annoying if you have forgotten to shut a window and try to click on something else, only to find you’ve sent your ship somewhere by mistake.

But these are only early issues and are easily avoidable when you get into the swing of things. That doesn’t mean that there aren’t other parts of this game that some might find frustrating or hard to enjoy.

The game includes a lot of reading and learning and could put people off in the early stages before things start to get interesting. And while other games have clear landmarks that help you understand that you’re doing a good job, Stellaris manages to keep you in the dark for a long period of time.

Is the start too slow? There’s a good chance that some gamers will be turned off by how much early development is needed to get things going The AI is also another talking point that might keep fans guessing, especially with all the different options available.

With so many things to tweak and adjust, it’s hard to say what makes for an easier start to Stellaris. And that’s without talking about the DLC that is being released on the Console Edition, adding even more content for those who want to try different stuff out.

Some players may find the AI slow and stupid, while others might get caught out by behaviour they thought they had optioned out. It all depends on your current playstyle and how unlucky you can be, things that can be a little annoying after sinking time into a game like Stellaris.

Stellaris gets the most important elements right with the console edition available on PS4 and Xbox One. While not a visually stunning game, Stellaris has its moments when it will suck you into the action of the galaxy.

The control scheme succeeds in holding together an extremely detailed and dense system of management tools that help you build your empire. The start of the game can be slow and the sheer amount of options – designing your own ship and building toward a special research project – can feel overwhelming.

And while the AI isn’t perfect, there are enough options to make it possible to build a playthrough that you most desire. Just for sheer uniqueness, Stellaris stands out from the crowd when it comes to special console games.

Elden Ring: How To Get Smithing Stones