The weekend of a Magic: The Gathering preview season is often a quieter affair than the surrounding days, and Commander Legends: Battle for Baldur's Gate is no different. With the rush of the 80-cards of the first day far behind us, we now had just six or seven new things to look at.

Not that that's a bad thing, though. Preview seasons can be overwhelming, so having quiet spots like this to process everything we've seen is nice. We weren't completely without fun new cards either, as today we have a new counterspell to watch out for, an interesting Azorius (white/blue) group hug commander, and a blue tool for the Ur-Dragon rivals the classic Vedalken Orrery. 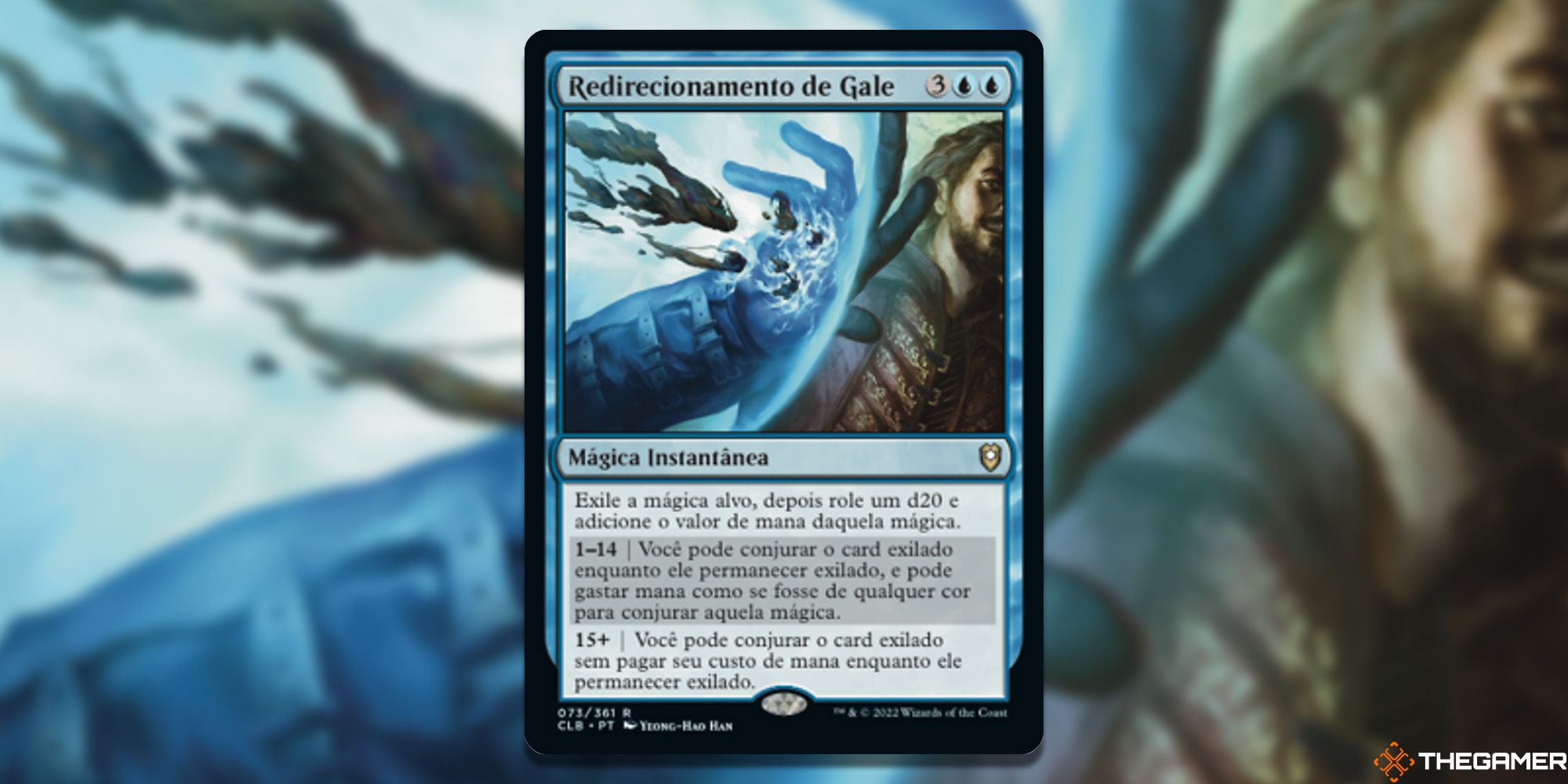 Exile target spell, then roll a d20 and add the mana value of that spell:

1-14: You may cast the exiled card for as long as it still is exiled, and you may spend mana as though it were mana of any colour to cast that spell.

15+: You may cast the exiled card without paying its mana cost for as long as it remained exiled.

A five-mana counterspell in Commander usually isn't worthwhile, but this one has the added benefit of stealing your opponent's spell from them and casting it yourself. It's also potentially better than a spell like Narset's Reversal or Deflecting Swat, because you don't have to decide the new targets there and then, you can just sit on the card until you're ready to play it. Countering a Cyclonic Rift with this would be gnarly.

Hitting the 15+ roll to cast it for free isn't going to be too tricky either, especially in lower power level games with high mana value spells being flung all the time. The catch, however, is that Gale's Redirection doesn't change the timing restrictions of a spell like Narset's Reversal does; if you counter a sorcery spell with it, you'll have to wait until your own turn before you can play it.

Also, remember that it's very unlikely you'll be stealing commanders with this. Though you can counter the spell, your opponent can elect to move it into the command zone rather than exile.

The Council of Four 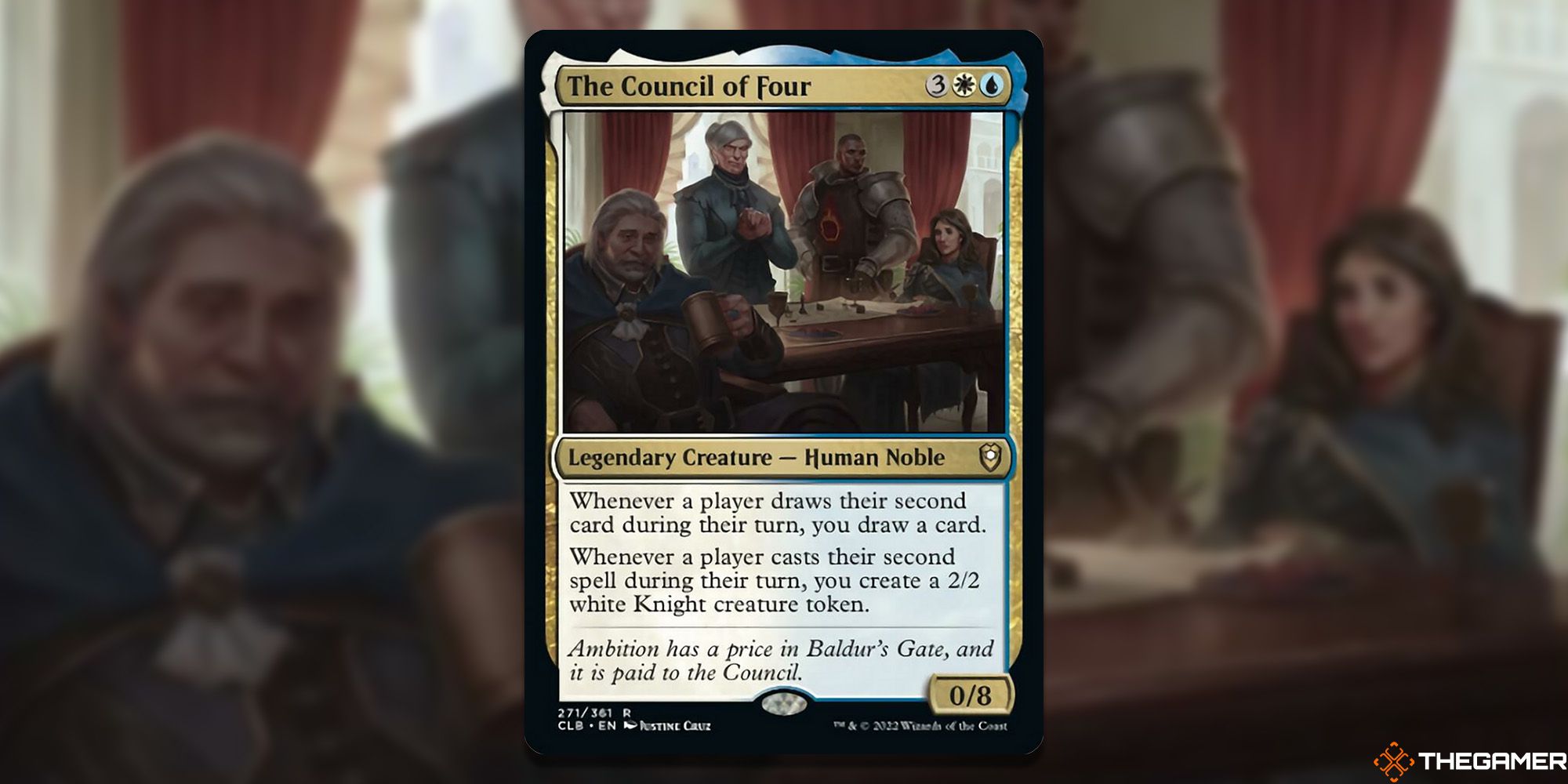 Whenever a player draws their second card during their turn, you draw a card.

Whenever a player casts their second spell during their turn, you create a 2/2 white Knight creature token.

Although this was technically revealed in day four's line-up, time zones meant it missed out in being included then, and it's too interesting to not share.

The Council of Four is a new Azorius (white/blue) commander that rewards you for your opponents drawing cards and casting spells. While you could build it into some kind of hatebears package to dissuade your opponents from doing too much, the real fun would be to take a group hug approach intentionally force your opponents into triggering the Council and giving you a leg up.

Run cards like Howling Mine and Dictate of Kruphix to ensure your opponents draw a second card every turn. How many spells your opponents cast is difficult to control, but Knowledge Pool will usually be enough to get that extra knight each turn.

If you're not planning on running The Council of Four as a commander, it also makes a great inclusion in a toughness-matters deck thanks to its meaty 0/8 stats. Whether it be Arcades the Strategist, or a blue-partnered Rasaad yn Bashir, these four old politicians could become a frightful attacking force. 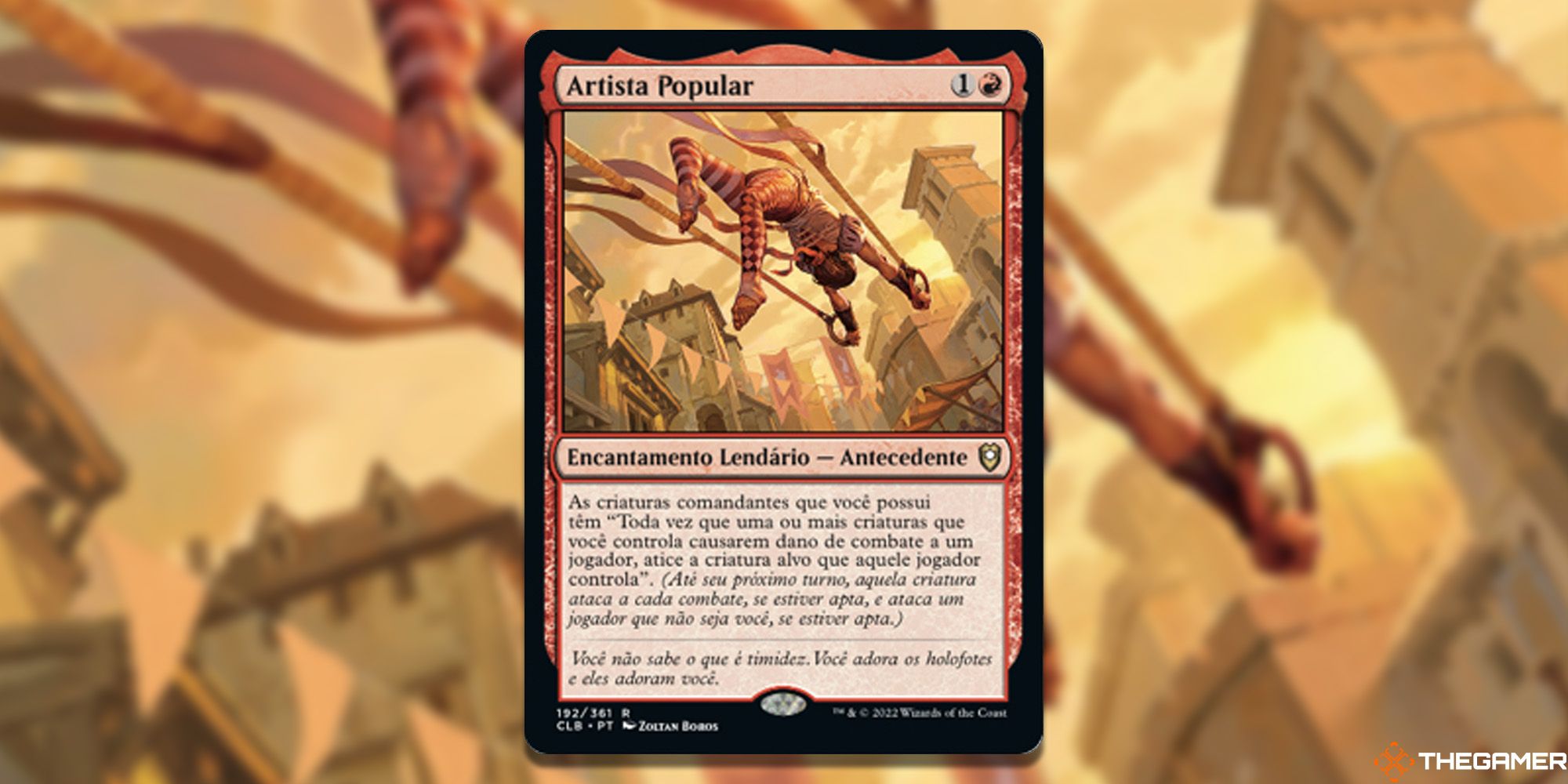 Commander creatures you own have "Whenever one or more creatures you control deal combat damage to a player, goad target creature that player controls".

So far, Backgrounds have been a relatively low-power alternative to having a partnered commander, offering minor effects that require your commander to be in play. Popular Artist isn't going to flip the table when it enters the battlefield, but there's still some utility to be had here.

As long as you're consistently swinging out and dealing damage, you could be goading up to three creatures each turn. It slots very nicely into decks with lots of myriad or encore creatures, such as Duke Ulder Ravengard, as you only need to attack with one creature to hit all three. Run cards like Warchief Giant, Battle Angels of Tyr, Herald of the Host, Banshee of the Dread Choir, Fathom Fleer Swordjack, Rakshasa Debaser, and Trove Tracker as well, to ensure you always have access to either the myriad or encore mechanics. 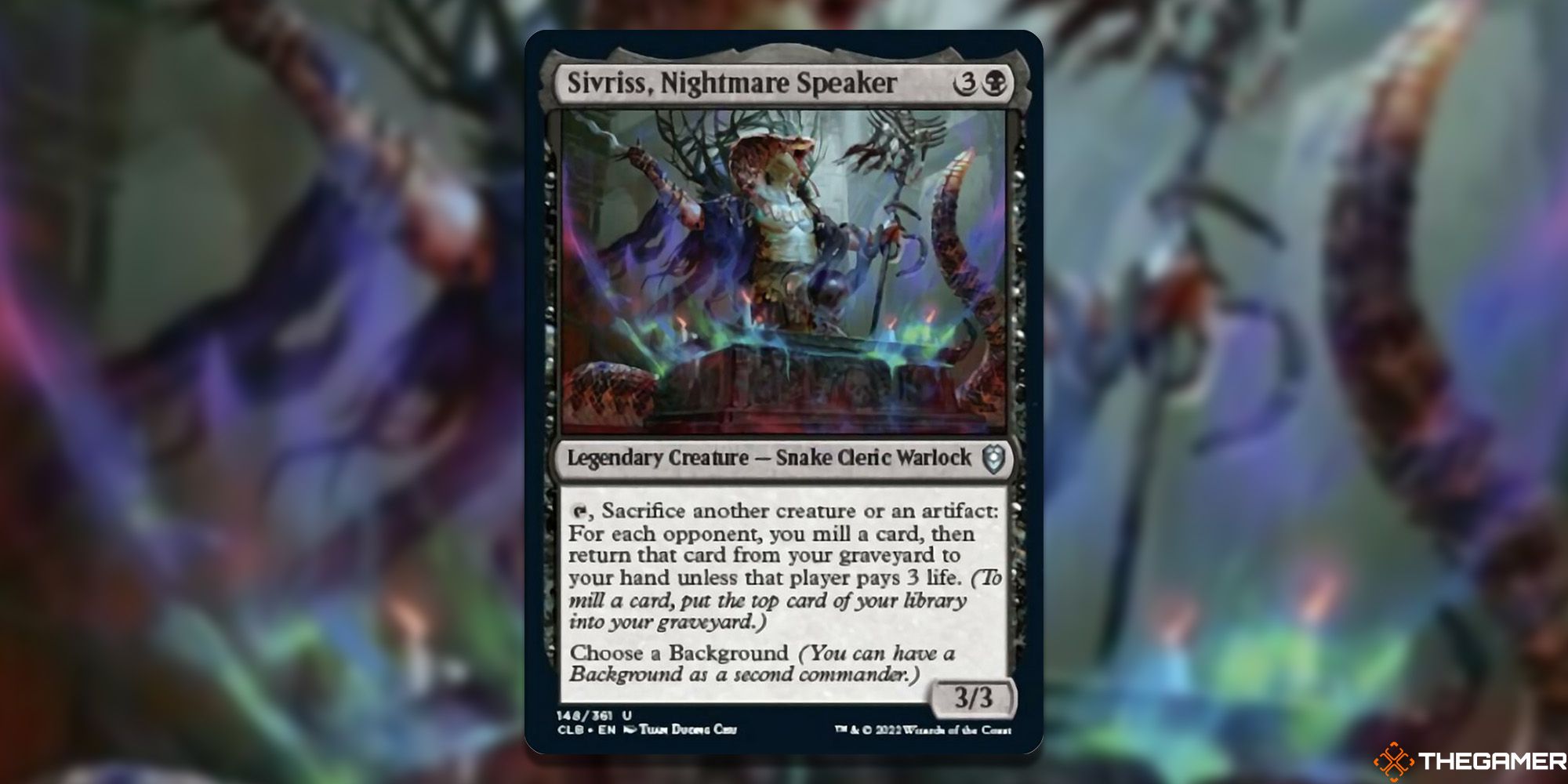 Tap Sivriss, sacrifice another creature or an artifact: For each opponent, you mill a card, then return that card from your graveyard to your hand unless that player pays three life.

This is a really cool mechanic. A once-per-turn sacrifice outlet has some utility, but being able to put a gun to your opponents' heads and let them potentially give you three extra cards is powerful. Three life isn't too much to pay, but in the right deck full of graveyard synergy effects, you could make it so your opponent would rather you draw the card instead.

Being partnerable with a Background also opens Sivriss up to a few impressive combinations. The best is probably Cloakwood Hermit – Sivriss mills the card no matter what, meaning if it's a creature you'll always get two 1/1 Squirrels. Doing so also expands Sivriss to the green/black Golgari colours, which have even more graveyard-loving tools at their disposal. It also gives you access to Seedborn Muse, letting you sacrifice a creature with Sivriss on each of your opponents' turns too.

An alternative is Criminal Past. Though it keeps you locked into mono-black, Sivriss will get bigger and bigger, and your opponents may be more inclined to just give you the card instead. 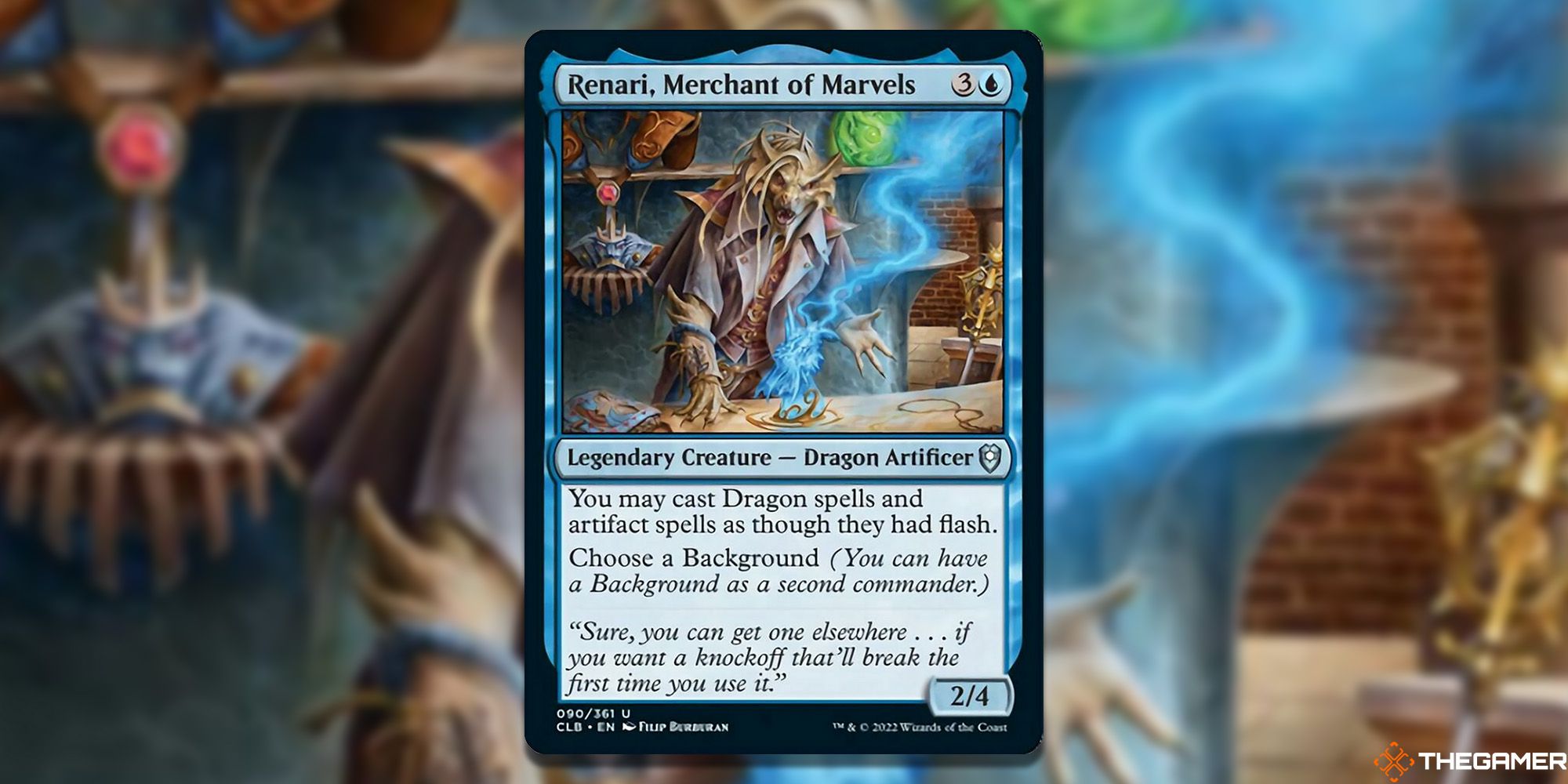 You may cast Dragon spells and artifact spells as though they had flash.

It seems like one of the themes of this set is to introduce a wider selection of Dragon commanders who aren't total powerhouses like the Ur-Dragon, Progenitus, and Tiamat. We've had many weaker Dragons with more humble effects, and, while Renari is one of them, he's pretty scary in his own right.

Casting Dragon spells as though they had flash is fine. It's a good way to surprise your opponents with blockers, and with some clever deck building you could be throwing out powerful Dragons on your opponents' end steps, just to untap and attack with them immediately afterwards. You could do some nasty plays with a Background partner like Acolyte of Bahamut to reduce the first Dragon each turn.

It's being able to play artifacts with flash that's more interesting. Throwing out the Diamonds (that enter tapped) for ramp on your opponent's end step is good, a Nevinyrral's Disk to board wipe is even better.

More critically, Renari will be an excellent inclusion in Ur-Dragon decks as part of the 99. With its larger colour identity and its usual reliance on the rather expensive Vedalken Orrery, Renari helps shore up those instant-speed plays.