George Costanza hasn't accomplished much in his life. In his own words, "I'm George. I'm unemployed and I live with my parents." Not that there's anything wrong with that. But his one unimpeachable accomplishment dates back to his high school days: the time he got the high score on the Frogger machine at a pizza place he and Jerry used to frequent.

So, when Mario's Pizza announces that they're going out of business in the season nine episode The Frogger, George makes an impulsive decision to buy the machine. When Jerry tells him that the scores will reset if the machine is ever unplugged, George comes up with a scheme to keep the machine running as he transports it back to his apartment.

But, when George arrives to move the machine, Slippery Pete, the random shady guy Kramer knows who can do this sort of thing, has worn down the machine's battery playing it on the sidewalk. So, George only has three minutes to get the machine to a new power source. He decides to push it to a pharmacy across the street. 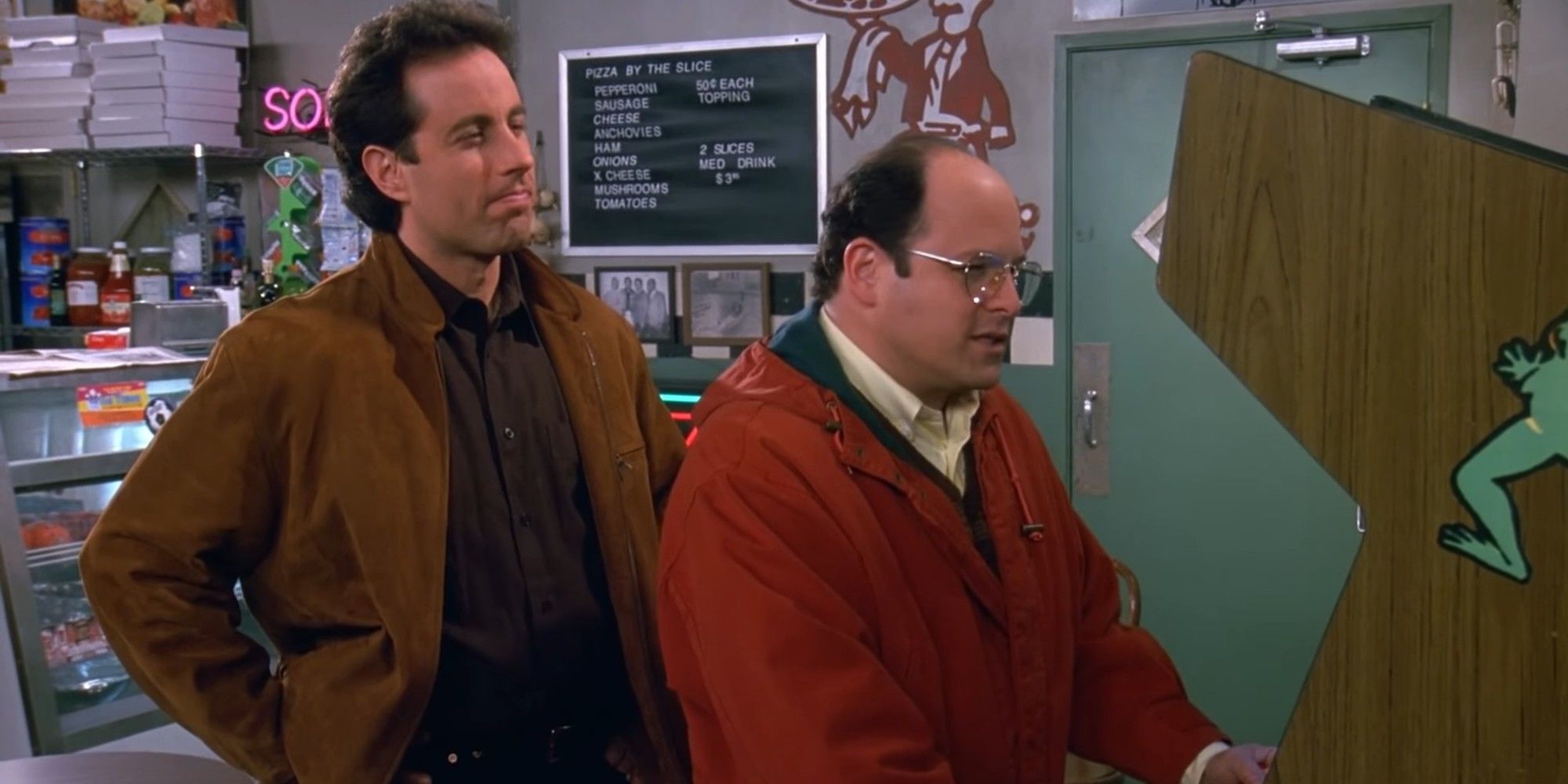 Before he starts to cross, he says, "Wait a minute, this looks familiar." Then, the camera shifts to a god's eye view far over George's head, a perspective that's instantly recognizable as a Frogger screen. As he attempts to transport the machine, he moves forward, backward, and side to side with the same jerky motions of Frogger hopping across the busy road. The joke works, whether or not you’ve ever played a round of Frogger, because we see a kid at the pizza place playing the game earlier in the episode. The episode’s director, Andy Ackerman, gives us a close-up of the gameplay, so even the uninitiated will recognize the callback later in the episode.

Of course, the punchline is that all of this effort ends up being for naught. George reaches the other side of the street, but struggles to get the machine over the lip of the curb. As he's rocking it back and forth, a semi truck appears, honking and bearing down on him. George dives out of the way, but the machine is shattered, a pinata of wood and motherboard fragments raining on top of him.

Knowing all that, you might be asking, “Is this really the best video game adaptation of all time?” Well, I'm being a little facetious with that headline. But, The Frogger is one of the few times a video game's perspective and gameplay objectives have been translated successfully to a non-interactive medium. It works as a joke. It's very funny, especially with George's declaration before his attempt: "Jerry, I've been preparing for this moment my entire life." But, it also takes the audience's presumed understanding of Frogger, and gives George the same objectives, from the same perspective. Whether or not you know Frogger, you will understand what he's trying to do.

Whereas many video game movies make radical departures from the source material to make them work in a filmed medium, this joke only works because it is entirely faithful. George becomes Frogger, and like Frogger, his only goal is to get across the street. And like the green hero, he ends up going splat.