Keeping your villagers fed is something that will occupy most of your time in The Wandering Village. With limited space, water, and manpower, finding enough food to keep everyone alive and happy takes planning and effort. Once your settlement begins to grow, your villagers will demand higher quality food and greater varieties than at the start. Your villagers can be surprisingly picky.

If you're struggling to know which crop to grow and when you should grow them, this guide will help with that. Though that really is just the start when it comes to managing your agriculture on Onbu's back.

The Wandering Village is currently in Early Access on Steam and as such, the content is subject to change. We will update these articles as required.

How To Grow Crops 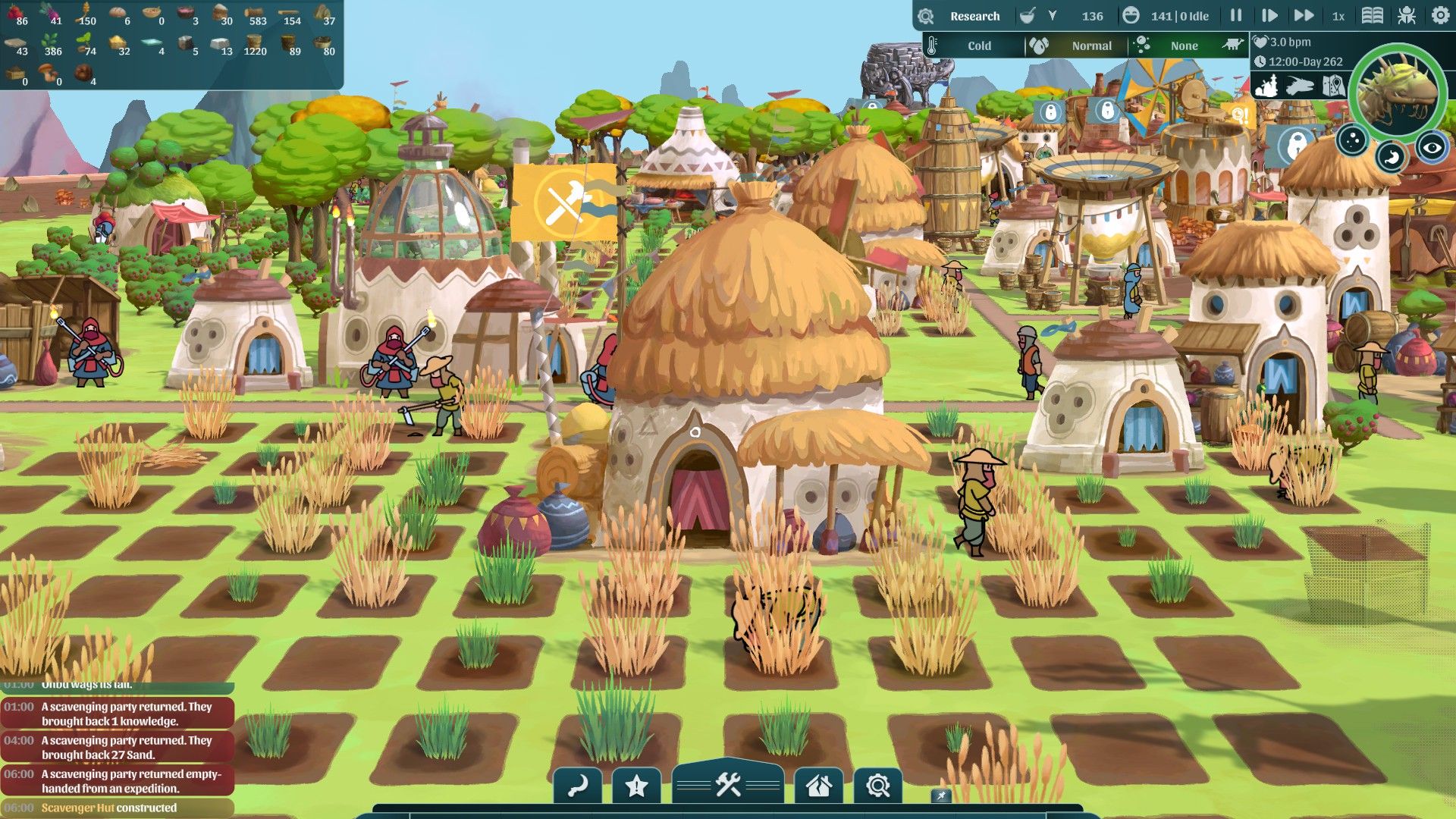 You need to build Farms to get started. These are cheap buildings that don't need to be researched before construction. Once built, you must designate where you want your farmers to plant your crops before they start. You are limited to planting on grassland so give some thought to where you want your fields to be located.

Air Wells and Water Tanks will become an integral part of growing your crops. Those buildings produce and store water necessary for crops to grow if there is enough humidity for them to do so. Make sure to build enough to keep all of your crops watered and to store enough for droughts.

Compost, made at the Compost Heap, is used to fertilize crops at farms, making them more efficient and improving your food production.

Once Onbu starts lumbering through the game's three biomes, understanding which crop to plant and when becomes very important. Your Farms will eventually be capable of plating five different crops that thrive in different environmental conditions.

Growing crops in unfavorable conditions either slows their growth to 60%, stops it completely, or outright kills them, making them decompose instead of grow. For example, attempting to grow corn while the temperature is freezing will see the entire crop fail while growing it in hot weather will allow the crop to thrive.

You can switch crops ahead of time to make sure that you're prepared for the next biome. If your farms are growing cactus and corn and you're heading into mountains, switching to beet and wheat before you cross over will let you harvest suitable crops more quickly.

Each crop's water consumption is also worth paying attention to. While choosing to plant tomatoes in the desert offers more food than corn, it uses three times as much water in a biome where it is already scarce. It may be a good idea to make the switch if you have plenty of water but are running out of food but sustaining it for too long might deplete your water supplies.

The desert is too dry for Air Wells to function. You will need to grow cactus and scavenge from oases to keep your water tanks topped up when you're in the desert. 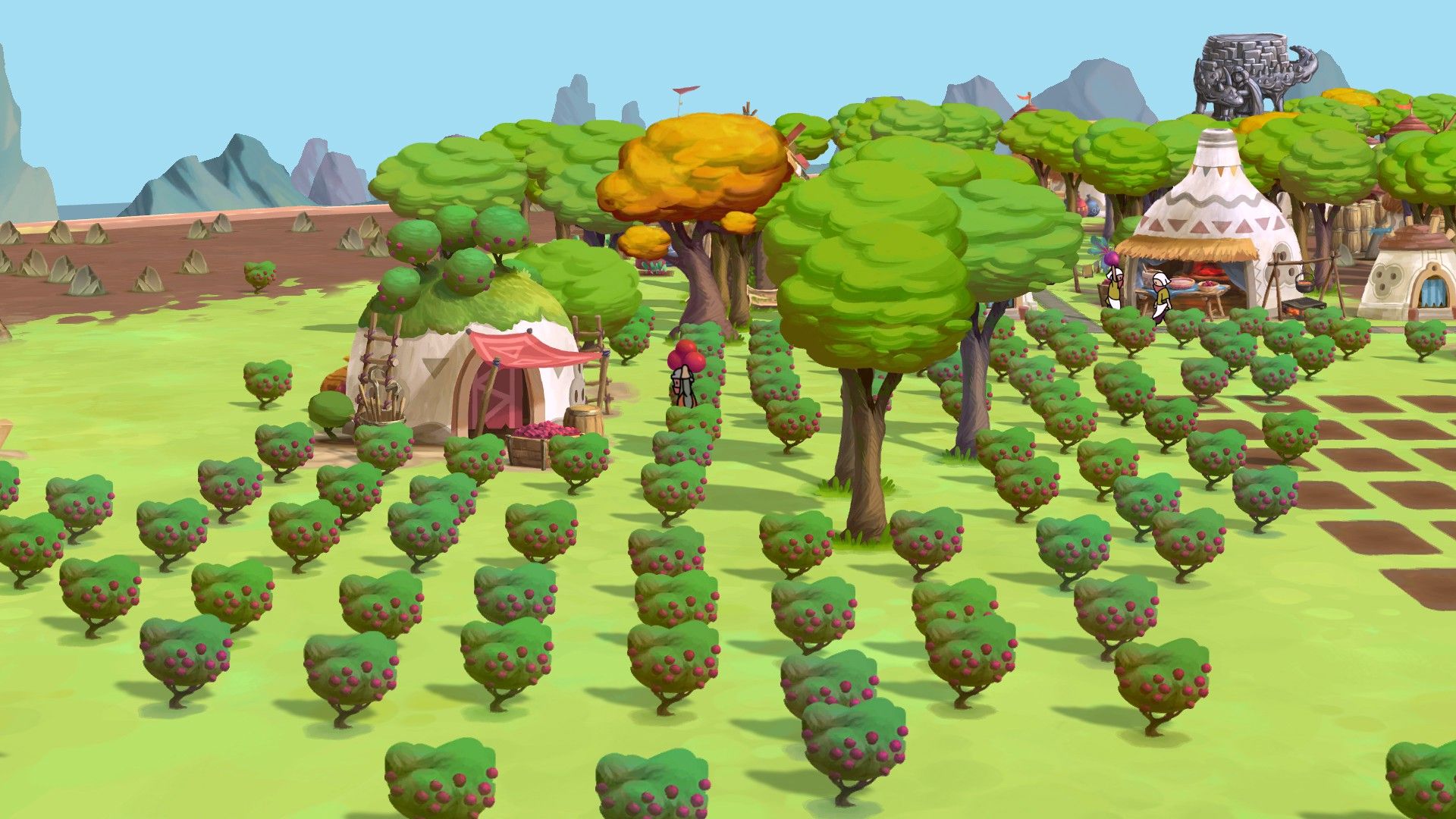 Using Berry Gatherers lets you develop a food source that doesn't require water and is unaffected by temperature. Berries will continue to produce food throughout your journey, albeit not as quickly as crops. The buildings work by harvesting berries from nearby bushes with efficiency rising alongside the number of nearby bushes. Efficiency may be low at the beginning but berry bushes will spread slowly over time. Eventually, your gatherers will be gathering at 100% efficiency.

Berry harvesting is especially vulnerable to toxic plants ruining the crop. You can't just plant more bushes meaning that once an infestation destroys a bush, you can't directly replace it. 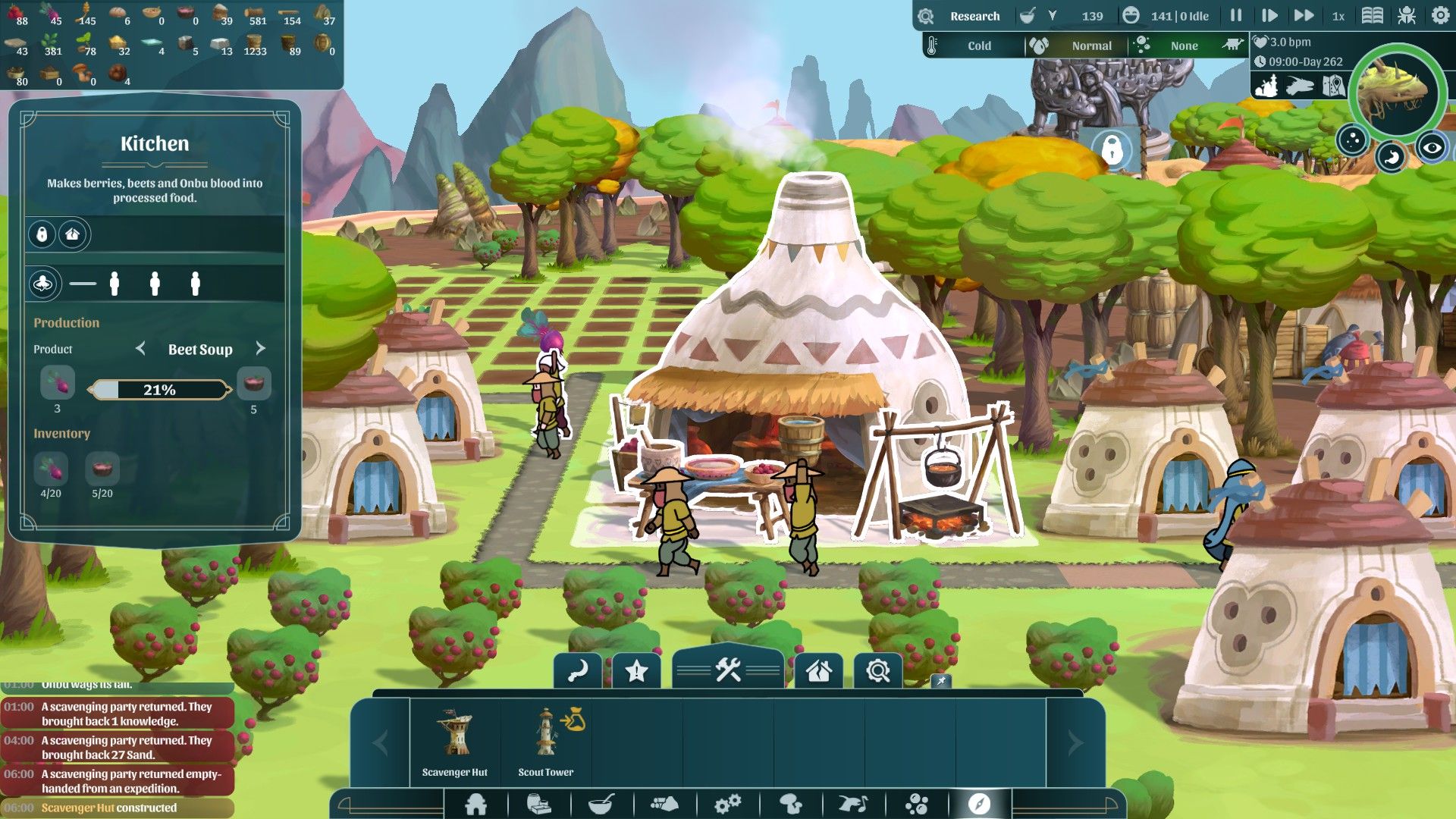 The sooner you research and build a Kitchen, the better. Processed food is of higher quality than its raw counterparts, which is necessary for keeping your villagers happy at larger population sizes. Processing can even multiply each crop's yield by making more food than is put in. It's especially apparent in the following crops:

Growing wheat throughout the journey is a good idea. It can survive in all biomes, barring extreme conditions. It also has the most return per crop harvested but it needs the most infrastructure to run. Instead of Kitchens, wheat must first be ground into flour at a Windmill before being turned into bread at a Bakery. It's a significant resource and research investment to unlock these returns.

Distributing processed food can present a logistical problem for your village. With buildings like Dung Collectors and Scavenger Huts needing to be constructed at specific locations, forcing their workers to travel long distances to get their food can waste valuable time and keep them from working. Food Stands solve this problem by automatically transporting processed food from Kitchens to store. It's a useful for keeping distant workplaces fed efficiently. 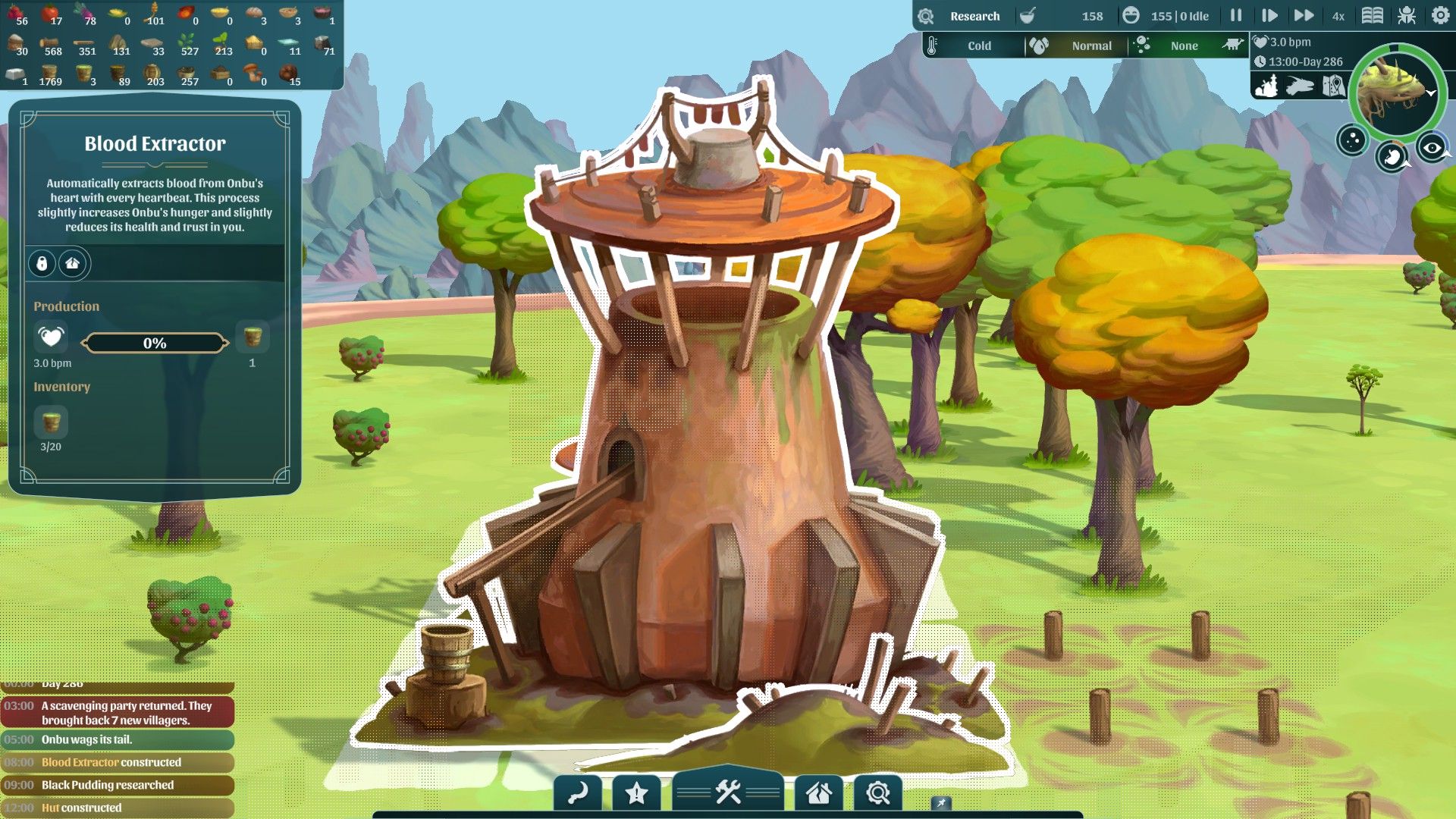 Despite your best efforts, crops can fail and famine approach. In such dire situations, the giant beast you live on may start to appear rather delicious. The Onbu Blood Extractor lets you sate your dangerous hunger by drawing out Onbu's blood to be cooked into Black Pudding. Using it will deplete Onbu's health and reduce trust, but it may be necessary evil to keep the village alive, at least in the short term.

Later in the game, you can even turn blood into water at a Laboratory to survive a drought, should it come to it.