Home » News » The Witcher 3: Blood And Wine – The Land Of A Thousand Fables Walkthrough

There are many interesting locations in The Witcher 3, but the Land Of A Thousand Fables is one of the most unique areas in the Blood And Wine DLC.

How To Beat A Land Of A Thousand Fables 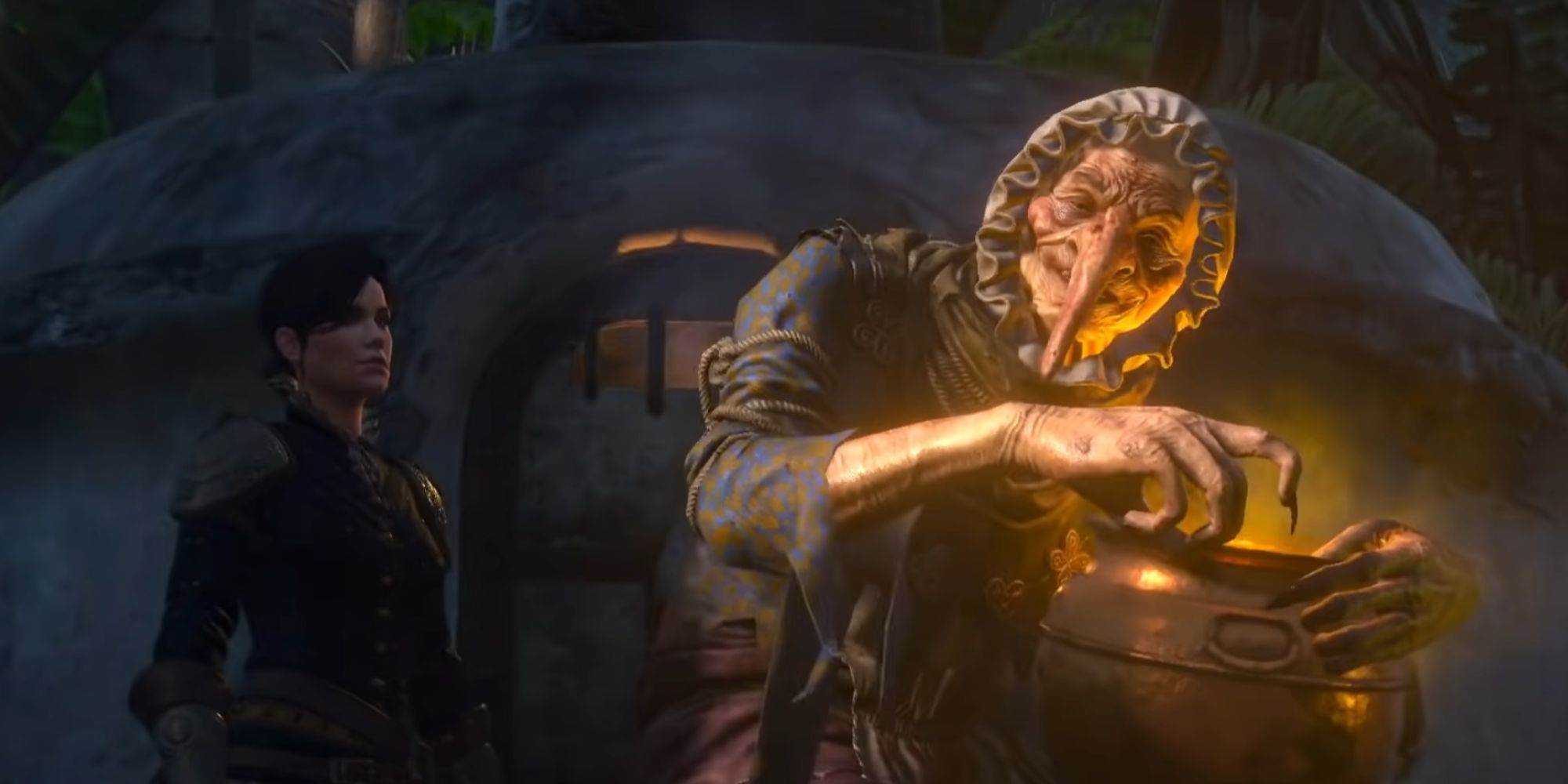 Once you enter the realm, continue walking on the yellow brick road until you come upon a split pathway. Continue to move straight and then take a right at the next turn, which will lead you to a hut. There are a few enemies along the path, but they aren't a major threat.

When you reach the hut, you'll encounter Syanna and the Wicked Witch. You have to fight the Wicked Witch, which is difficult because she flies in the air for most of the battle. When the Witch moves towards the ground to attack you, use your Crossbow or the Aard Sign to knock her out of the air so that you can attack her.

If you manage to ground the Wicked Witch, then make sure to destroy her broom to stop her from riding away. Keep damaging the Witch until you defeat her, at which point you can speak to Syanna after a short cutscene with the character Jack.

Jack mentions beans, so ask Syanna about them. She'll reveal that there are three beans in total, and finding them is the next primary objective of your journey in the Land Of A Thousand Fables. With Syanna by your side, leave the area and get back on the main path. You need to walk through a small ravine, which is home to a few pixies that you can fight. Defeat the pixies and then find the Unicorns ahead of Geralt. You can ride the Unicorn like Roach, so get on it and continue following the main path until you reach a boy by the name of Joss. 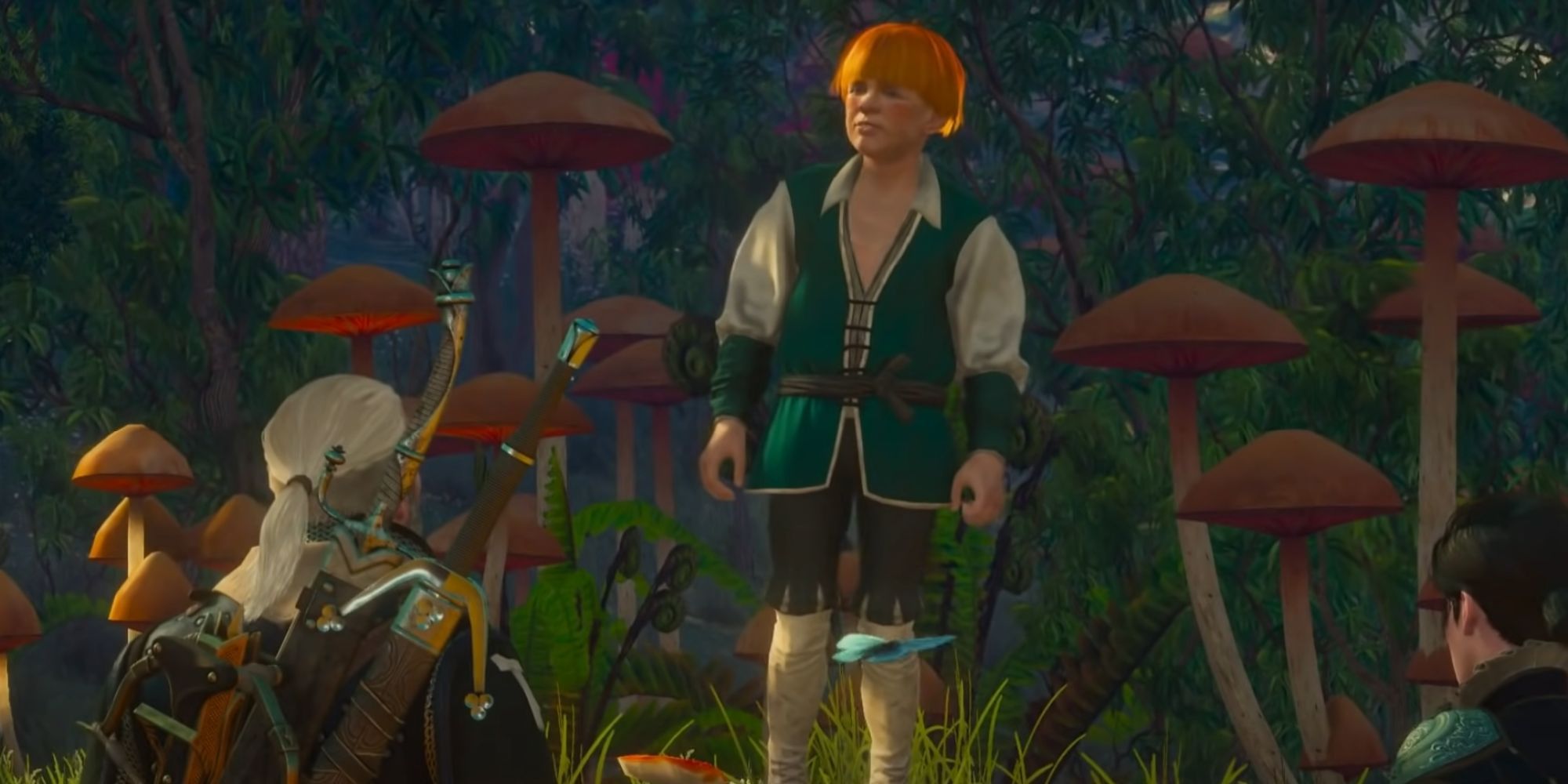 Kill the wolves near Joss and talk to him. After a brief conversation with Joss, you'll learn about the three beans. Since Joss is a liar, you'll need to talk to Syanna to make sense of the things Joss tells you. The first bean is with the Big Bad Wolf, who you can find by continuing along the path on the left side of the large tower and then taking a right at the next split.

How To Get The Red Bean 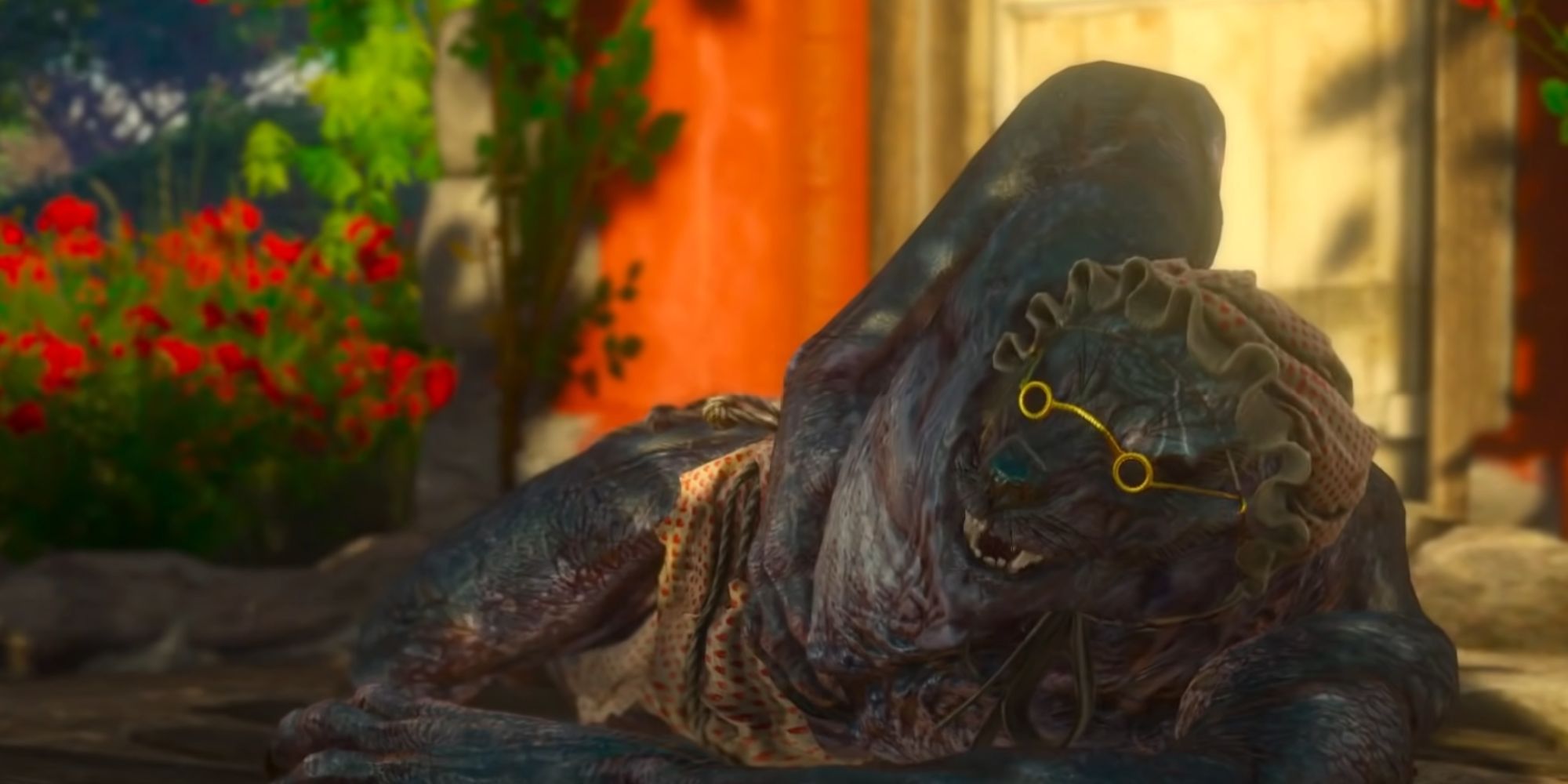 If you follow the previous directions, you'll come across a Red Hut with the Big Bad Wolf. You may notice that the Wolf is hungover, and he refuses the talk until you act out his fairytale with Syanna as Little Red Riding Hood. You need to retrieve the hood before the reenactment can begin, so find the well near the Wolf and jump into it.

The body of Little Red Riding Hood is at the bottom of the well, which is where you can grab the hood. There's a small path you can use to swim back up to the surface. Give Syanna the hood and speak with the Wolf to start the show. Shortly after you start the reenactment, you can kill the Big Bad Wolf and loot the Red Bean from his body.

Speak with Syanna again before continuing to the Yellow Bean; however, the dialogue with Syanna may impact the ending you receive. When you finish talking, leave the Red Hut and head to the tower.

How To Get The Yellow Bean 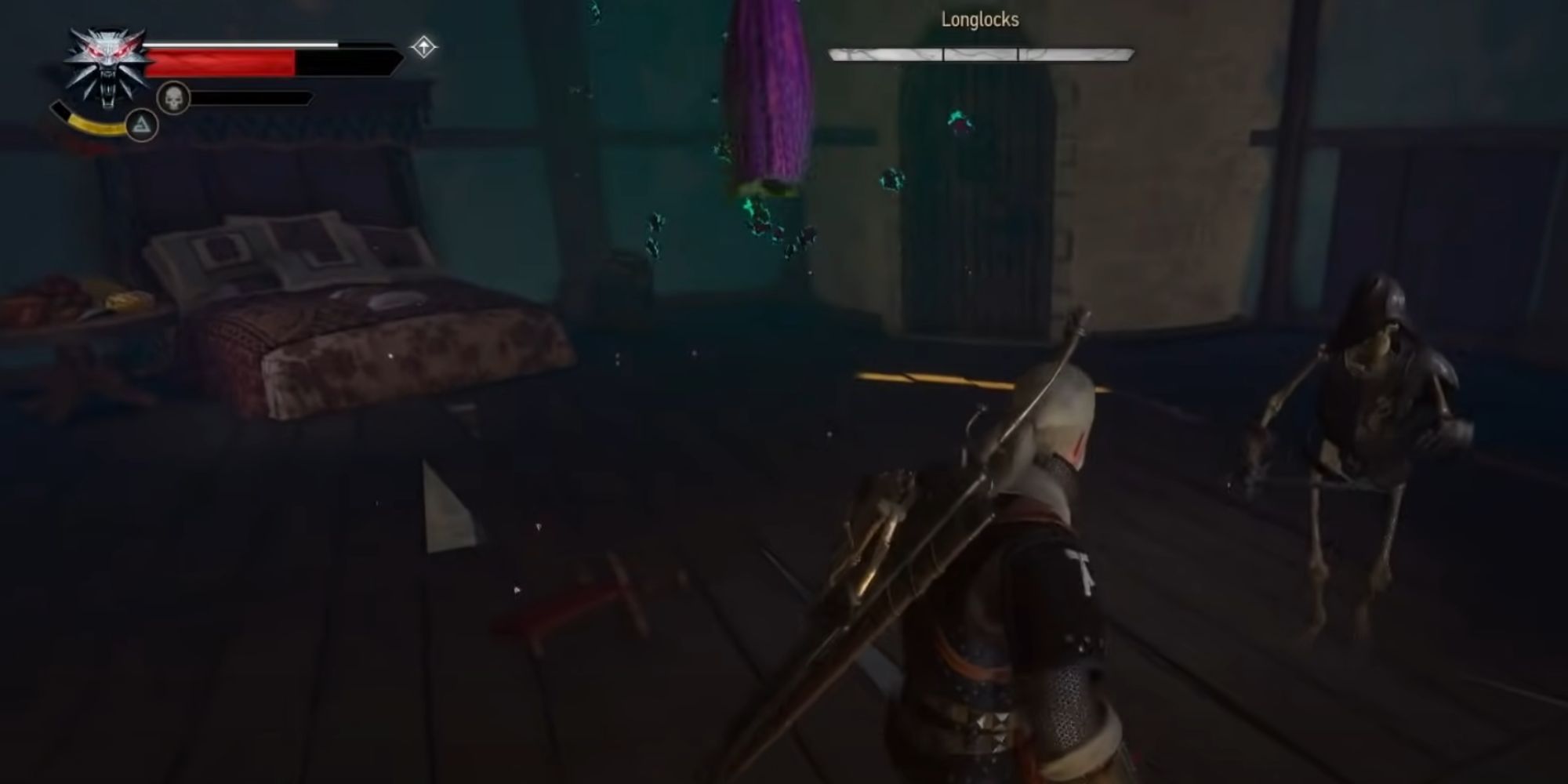 Walk towards the large tower in the middle of the Land Of A Thousand Fables and start climbing it. Syanna won't help you climb the tower, so you have to complete this task solo. Once you reach the top of the tower, you'll encounter a Wraith with golden hair by the name of Longlocks.

The Wraith can regenerate and spawn minions, so focus primarily on her and take her out quickly before she can heal. You can take the Yellow Bean off the pillow once you defeat the Wraith. Climb back down, and you can continue your conversation with Syanna.

How To Get The Blue Bean 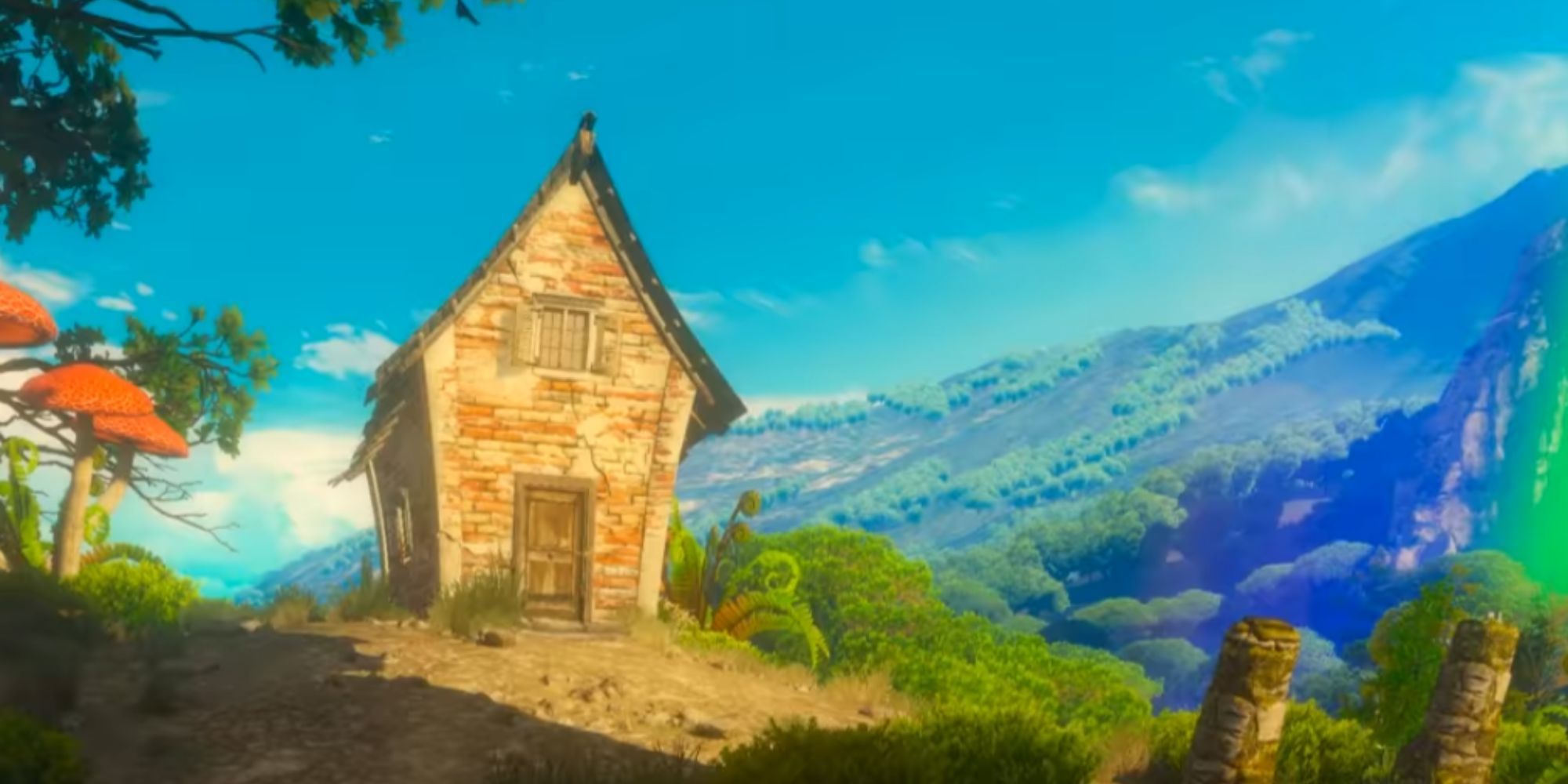 The Blue Bean is the final bean in the Land Of A Thousand Fables. Travel northwest from the tower, and you'll encounter a Brick House. You need to use the Aard Sign to destroy the house, which will reveal three pigs, which act similar to boars. When the pigs are dead, you can find the Blue Bean on the table inside the house and speak to Syanna again for another dialogue sequence.

How To Get The Ribbon 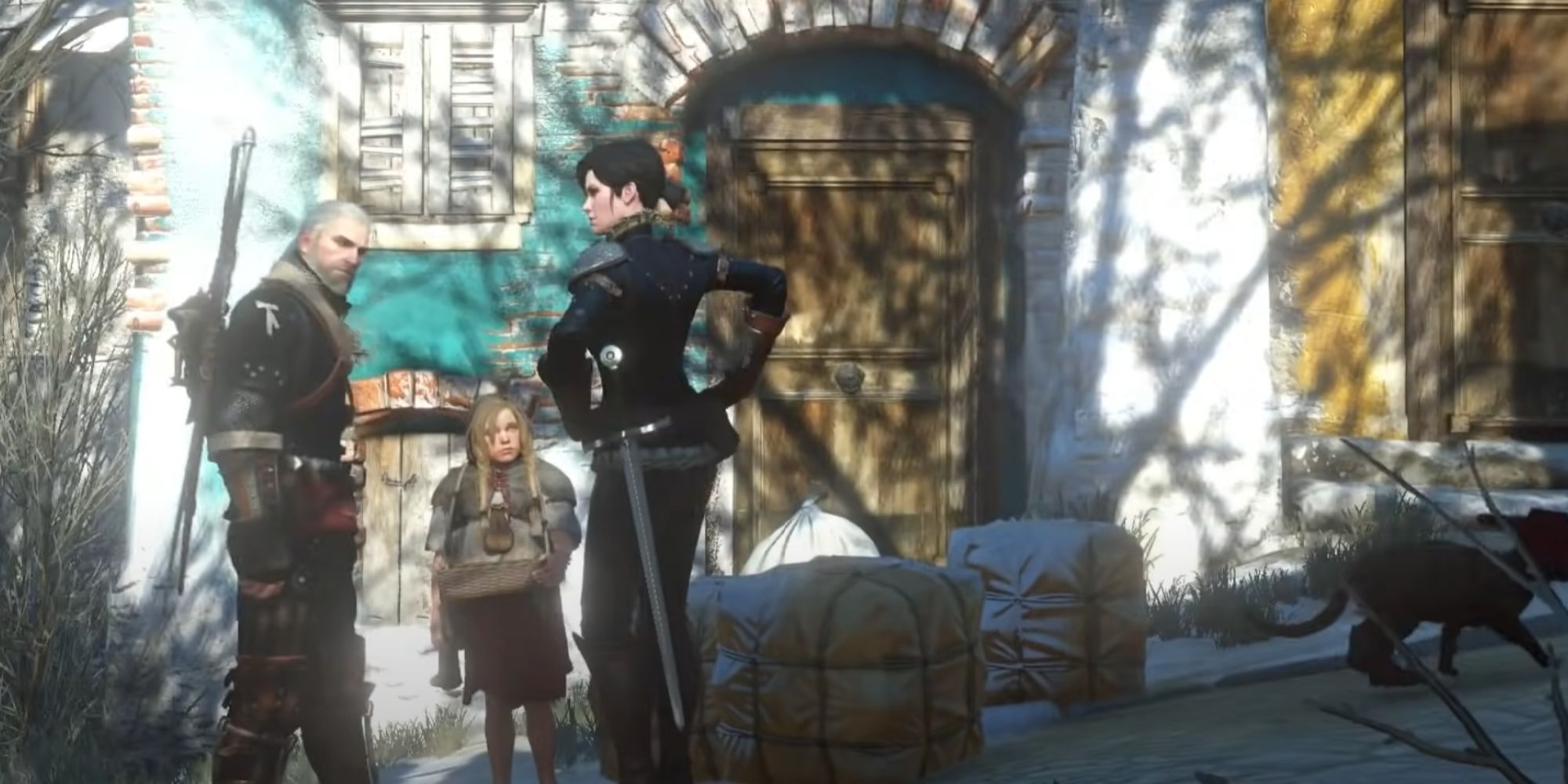 Obtaining the Ribbon is optional, and it only matters if you want the good ending. You need to travel to Snowy Village, which is a small town north of the tower. The Little Flint Girl is inside the village, and you'll know it's her because she's a young girl. 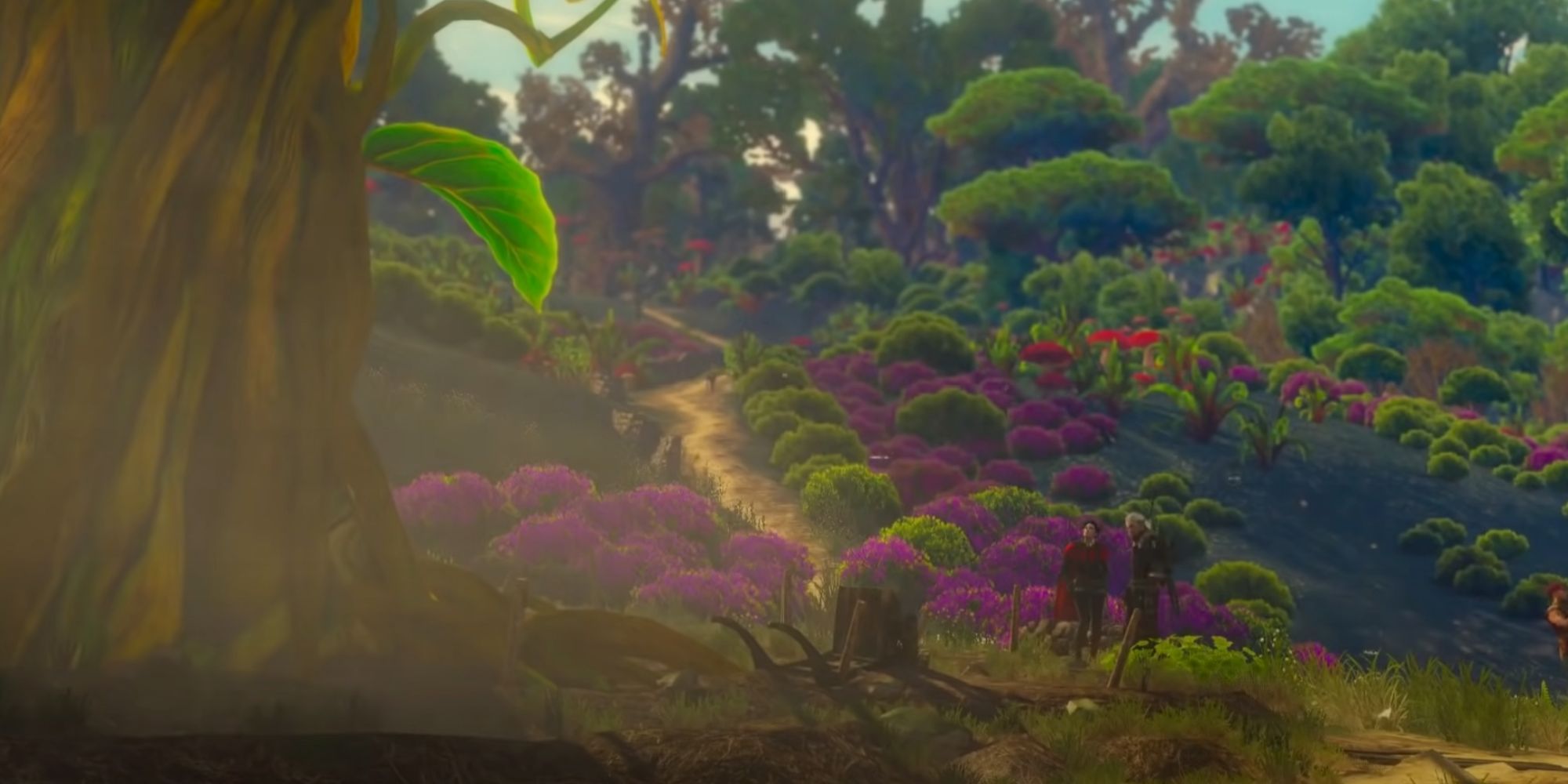 When you have all three beans, and you're ready to leave the Land Of A Thousand Fables, you can travel to the open area next to Snowy Village and activate your Witcher Senses. Your Witcher Senses will tell you the exact location to plant each bean, so follow the locations, and the beans will grow into a beanstalk. Pixies may spawn in the area, so defeat them before continuing. Geralt and Syanna will climb the beanstalk, and you can leave the realm. 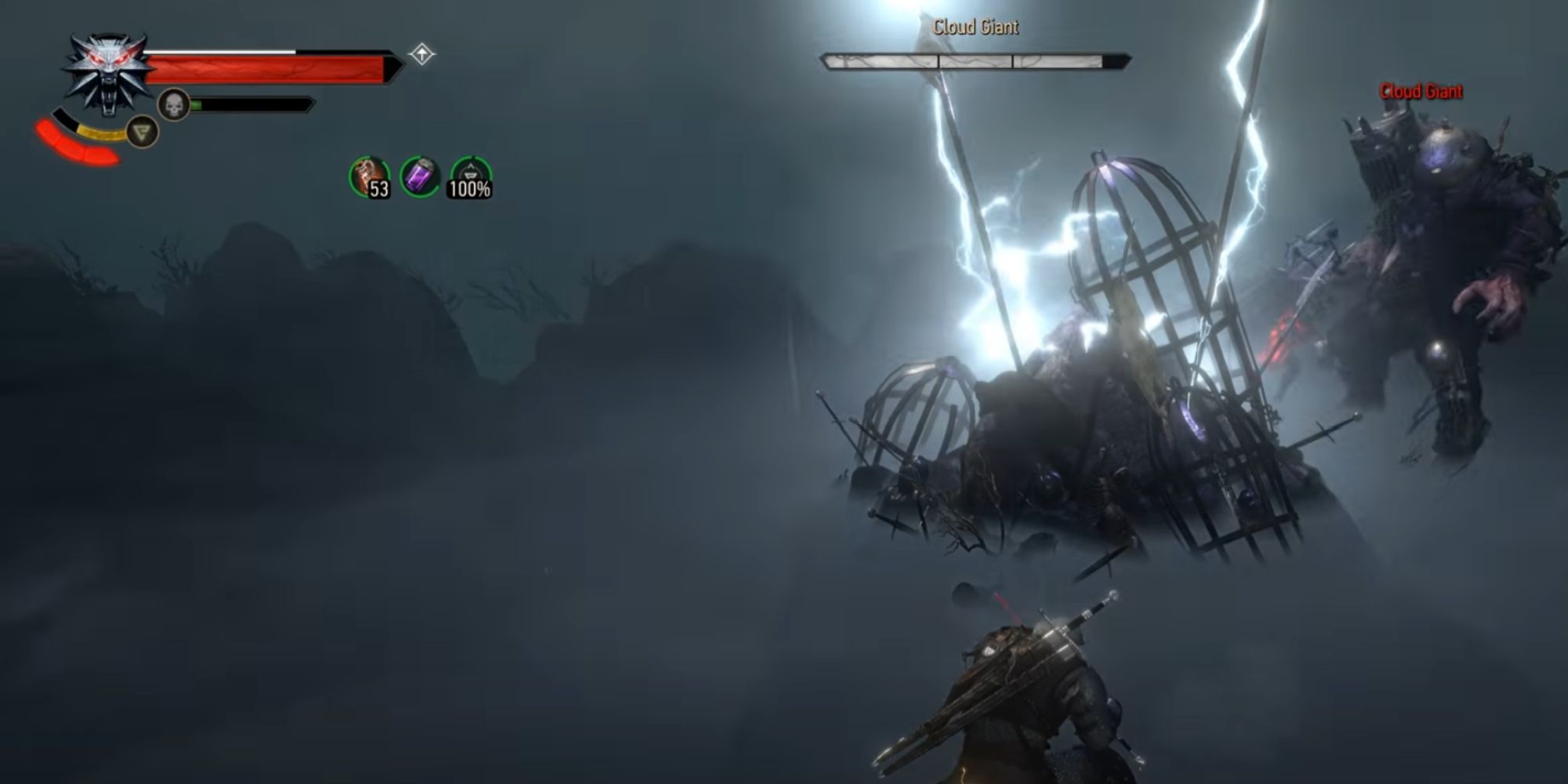 Unfortunately, Geralt's adventure in the Land Of A Thousand Fables doesn't end until you defeat the Giant at the top of the beanstalk. This Giant has a few unique attacks that make it difficult to defeat. The Giant will occasionally move underneath the clouds to avoid damage, but it will come back up to attack you swiftly. You need to dodge regularly to ensure you don't get hit by any of these surprise attacks.

If you look around the battlefield, you'll notice three metal beacons. When the Giant hits these beacons with its attacks, the beacons will stun the boss for enough time for you to deal damage. The Giant is weak to the Igni Sign, as well as Ogroid Oil. Continue with this combination of attacks until you defeat the Giant.

Once the Giant is dead, speak to Syanna for a dialogue sequence. Click the "Useful How?" Dialogue option if you want a romance scene to occur between Geralt and Syanna. There's a unique weapon named Gesheft below the nearby bridge that you get if you follow the path near the Will-O'-The-Wisp.

Afterwards, you can move towards the bridge and follow the path until you find a well to jump inside. This well will take you back to Toussaint. Most of the items you receive in the Land Of A Thousand Fables will leave your inventory once you jump into the well.

Side Content In The Land Of A Thousand Fables

There are a few pieces of side content in the Land Of A Thousand Fables that you should complete before you leave this unique open-world area. 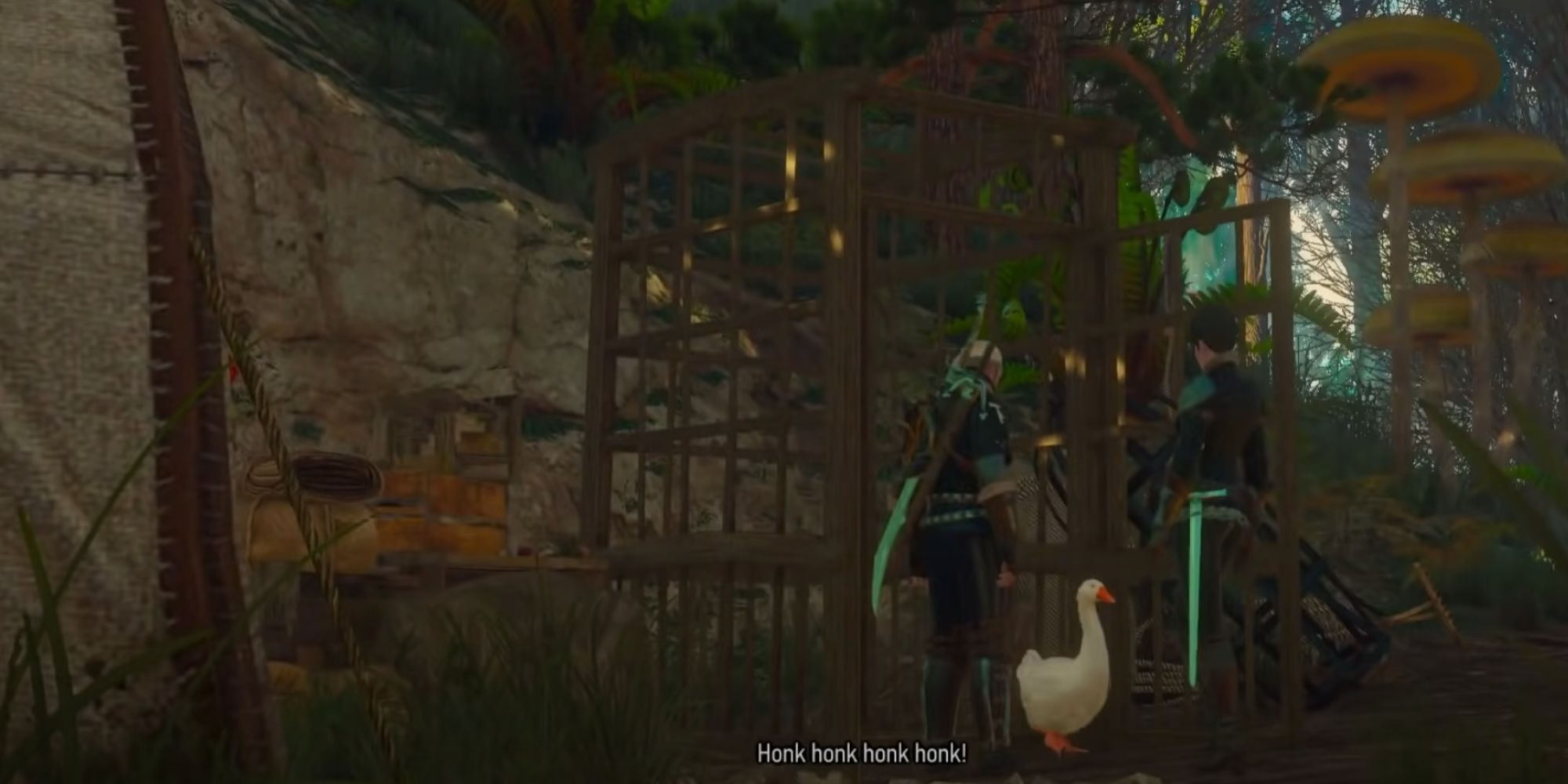 The "Duck, Duck, Goosed!" quest is the only side quest in the Land Of A Thousand Fables, and you can start it by interacting with the Notice Board in Snowy Village, which you can find by looking for the only regular village in the realm.

Once you start the quest, you need to travel south of the Snowy Village to a small hut. The quest marker will guide you to the exact location. You'll come across feathers near the hut that you need to interact with to continue. Follow the feathers and defeat any pixies you encounter in the area.

You'll eventually encounter Redbeard's Camp after following the trail of feathers; you need to defeat him to progress. Redbeard isn't a particularly powerful enemy, which means you can defeat him quickly compared to the other bosses in the Land Of A Thousand Fables.

Get the key from Redbeard's body and use it to open the nearby cage. Speak to the Goose once Redbeard is dead, and you'll receive a Golden Egg. You can eat the Golden Egg to receive a skill point; however, it will leave your inventory when you exit the Land Of A Thousand Fables, so eat it while inside the realm. The quest will conclude after you save Balbina The Goose. 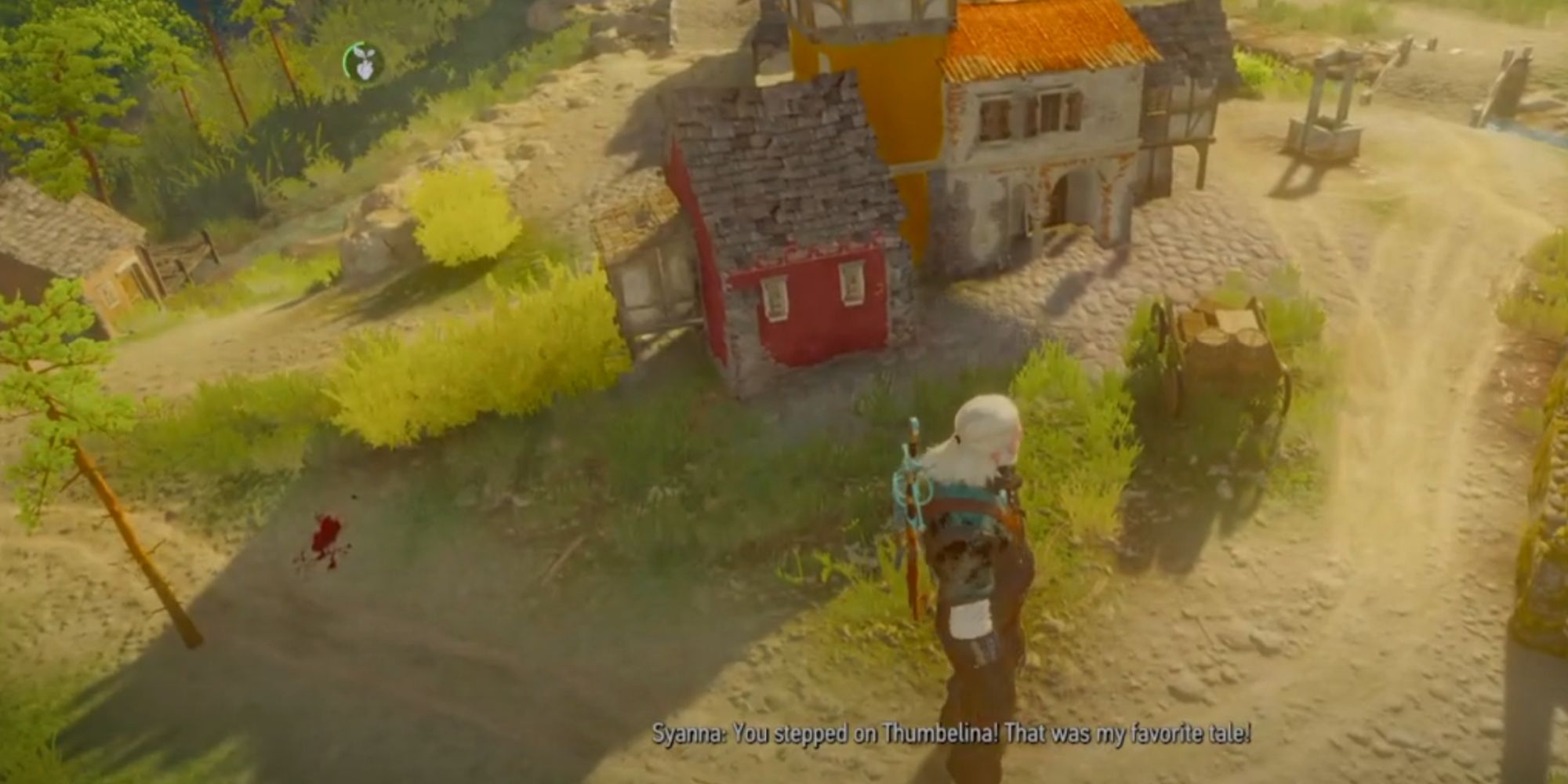 The toy size of Thumbelina's Village is interesting by itself, but you can also step on Thumbelina since she's much smaller than Geralt. If you step on Thumbelina, then Syanna will be angry at Geralt for killing the fairytale character.

The Toussaint Armor And Vitis The Sword 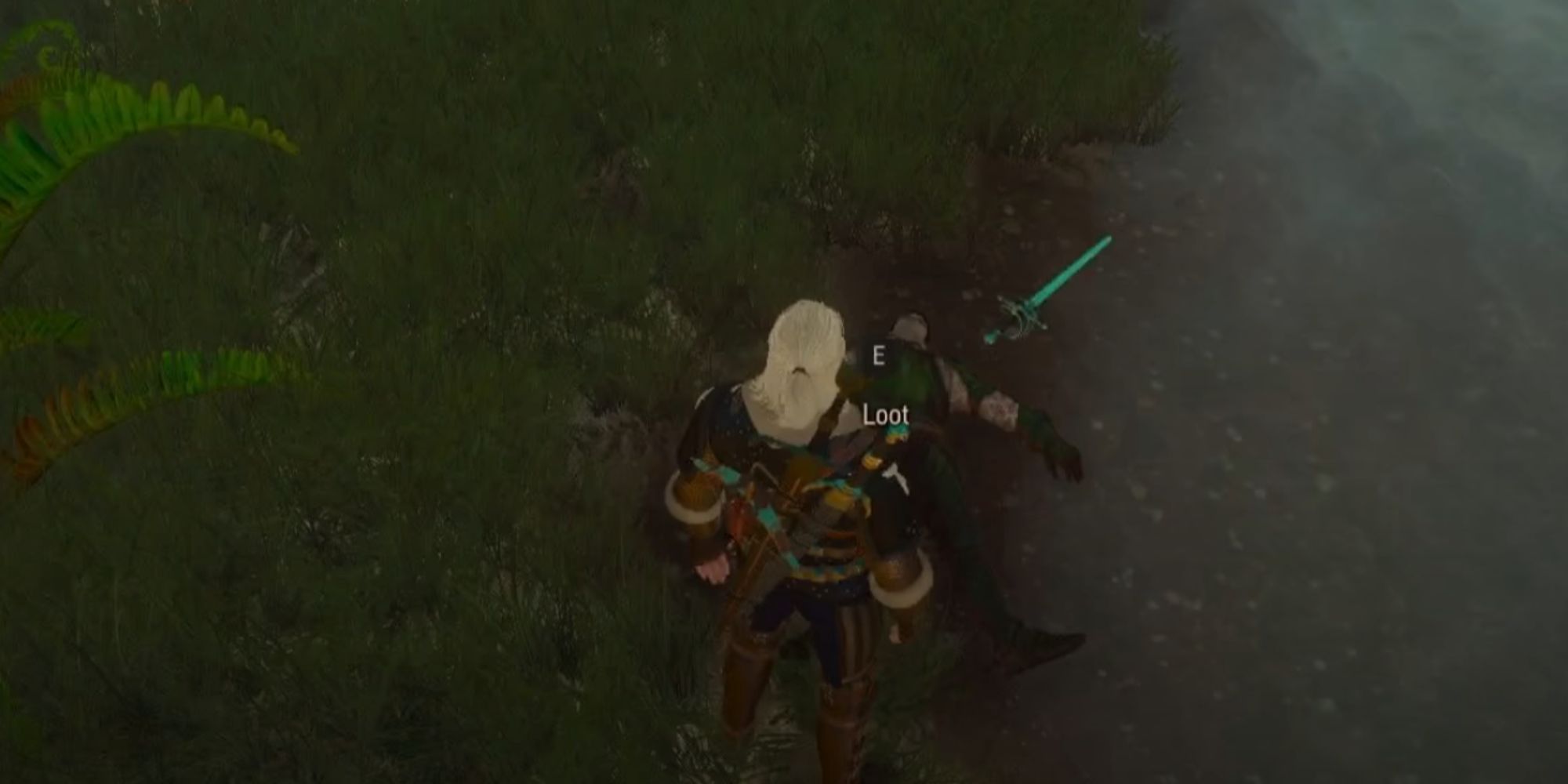 The Toussaint Armor offers the wearer resistance to piercing damage, slashing damage, bludgeoning damage, and burning effects, as well as 450 extra vitality. You can also find Vitis nearby, which is a Steel Sword that grants a 20 percent intensity boost towards all of your signs.

GoodTrust manages your digital accounts after you die

Get An Exclusive Look At The Weapons In Deathloop